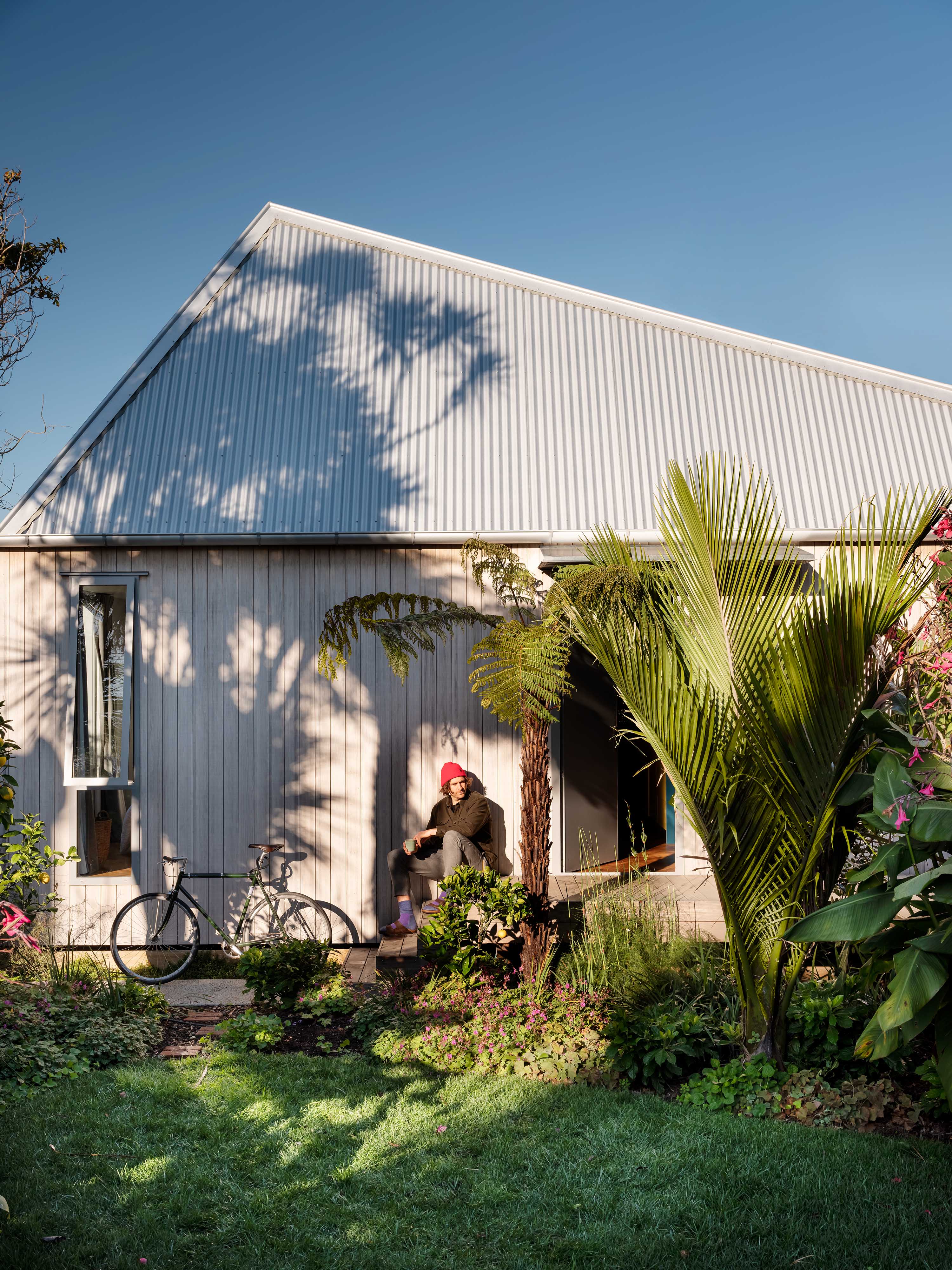 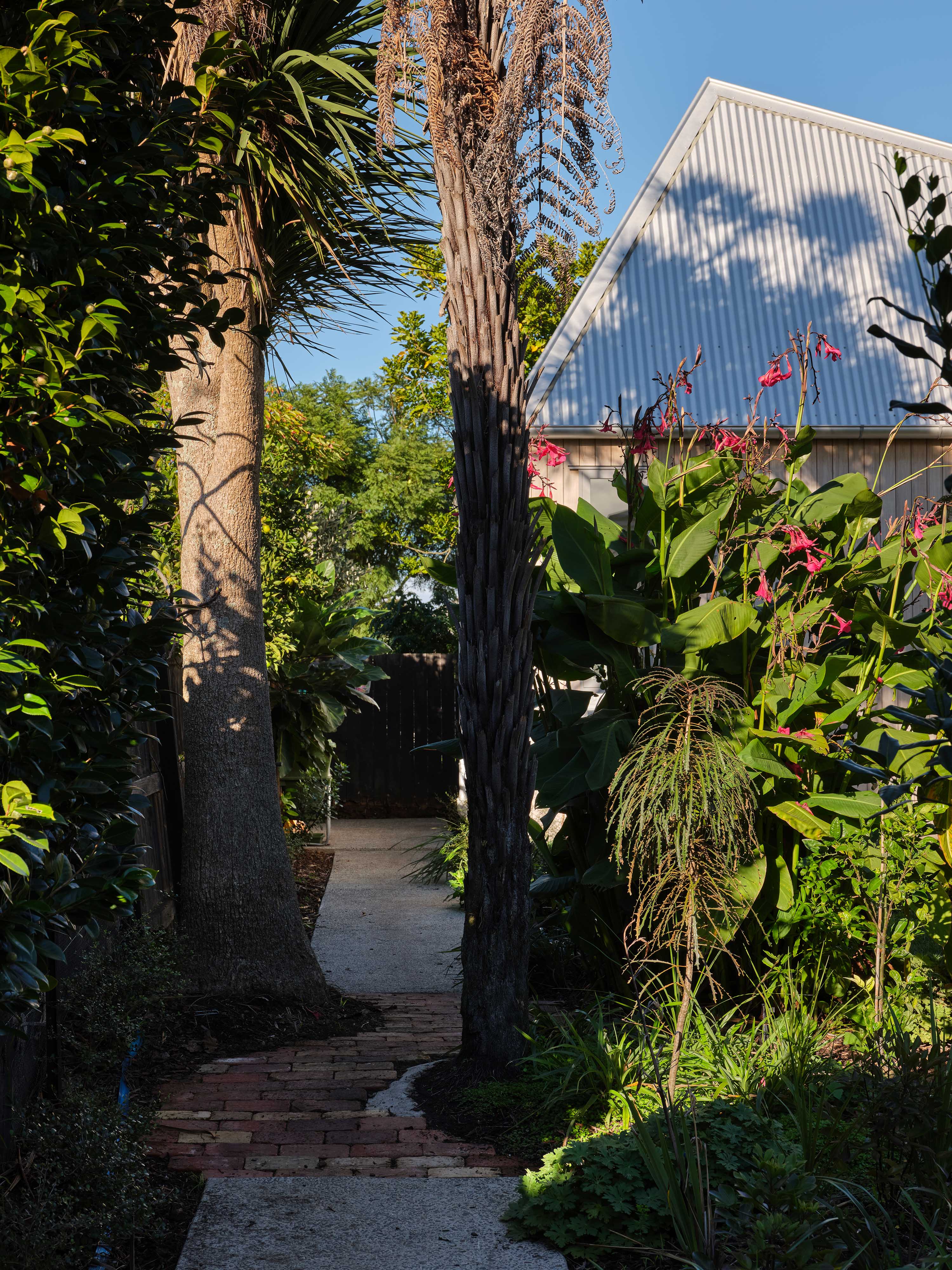 A stark reality confronts anyone trying to enter the Auckland property market, or, in non-real-estate speak, own somewhere decent to live. Even for the comparatively affluent, the disparity between available means and auction prices is dismaying. Consequently, a lot of mental bandwidth in Tāmaki Makarau Auckland is dedicated to figuring out ways to overcome the barriers to home ownership.

For Ryan Heron, the leg-up into the ‘market’ was provided by friendship and the provisions of the Auckland Unitary Plan. Heron is a filmmaker who, before Covid restrictions re-arranged his life, divided his time between New Zealand and Europe. “That stage of my life might be over,” he says, with the ruefulness appropriate to someone who has spent a good part of the past several years living in an apartment in Barcelona’s historic Barri Gòtic quarter.

Tired of bunking down with family and friends on his stays back in New Zealand, Heron partnered with a friend to buy a property in Sandringham, the unpretentious, bungalow-rich suburb that spreads south of Eden Park. Heron’s friend, who has a young family, occupied the house on the site, a lot of which has the comfortable proportions of Auckland sections carved up in the early 20th century. The backyard is generous, large enough for a trampoline, with plenty of space to spare. Sufficient, crucially, to accommodate a ‘minor dwelling’, which is permitted in areas of the city, like this part of Sandringham, classified as a Residential Mixed Housing Urban Zone (‘H5’) in the Auckland Plan.

Planning permission entails meeting various design standards, including those governing a dwelling’s site coverage, its height-to-boundary relationship and its ‘required outlook space’. The potential for a building’s form to be the brute result of the arithmetic of compliance is obviously significant, as is evident on a stroll along any of Auckland’s residential streets. Engaging an architect on a minor dwelling project is not mandatory, but even a cursory analysis of the incidence of the type in the city’s suburbs would suggest it is a good idea.

Once he secured his backyard site in H5-land, Heron found a builder, Ben Kevey-Maiden of New Wave Construction, who in turn recommended an architecture practice, Pac Studio, the Auckland-based firm founded and directed by Aaron Paterson and Sarosh Mulla. Heron did his research – he’s used to creating ‘mood boards’ – and liked Pac Studio’s work, including a number of projects in the Matakana and Point Wells area north of Auckland.

In 2020, Pac Studio notably demonstrated its readiness to reconcile fun and function with the very cute and much-awarded Point Wells Cricket Club. Before that, Mulla designed the acclaimed, and equally photogenic, Welcome Shelter at the Waikereru Ecosanctuary near Gisborne. There’s much more to this innovative firm than Insta-irresistibility, though. Paterson and Mulla combine practice with their teaching roles as part-time senior lecturers at the University of Auckland’s School of Architecture – Mulla has a doctorate, Paterson is completing one – and they are very active in exhibiting and writing about architecture. 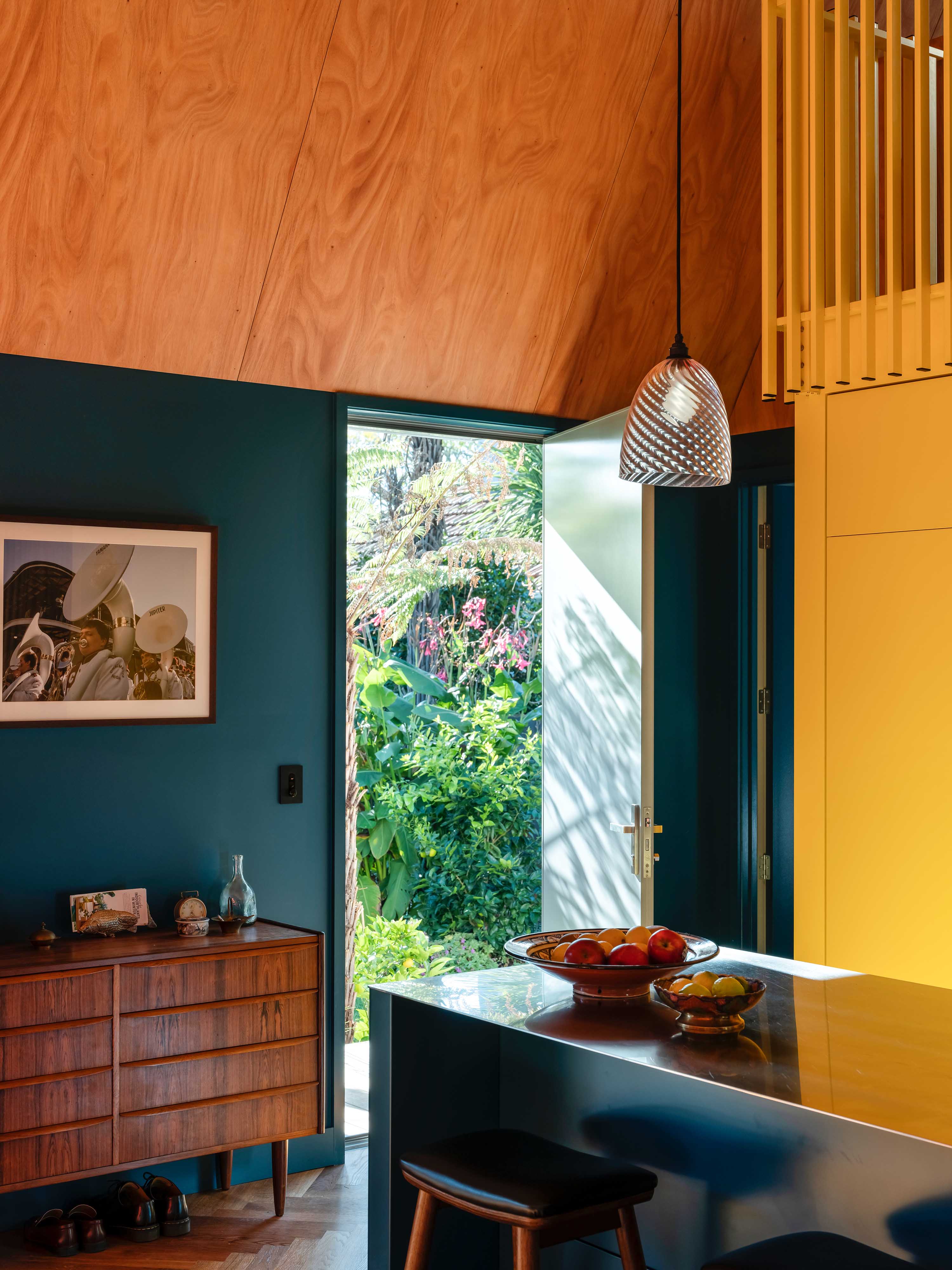 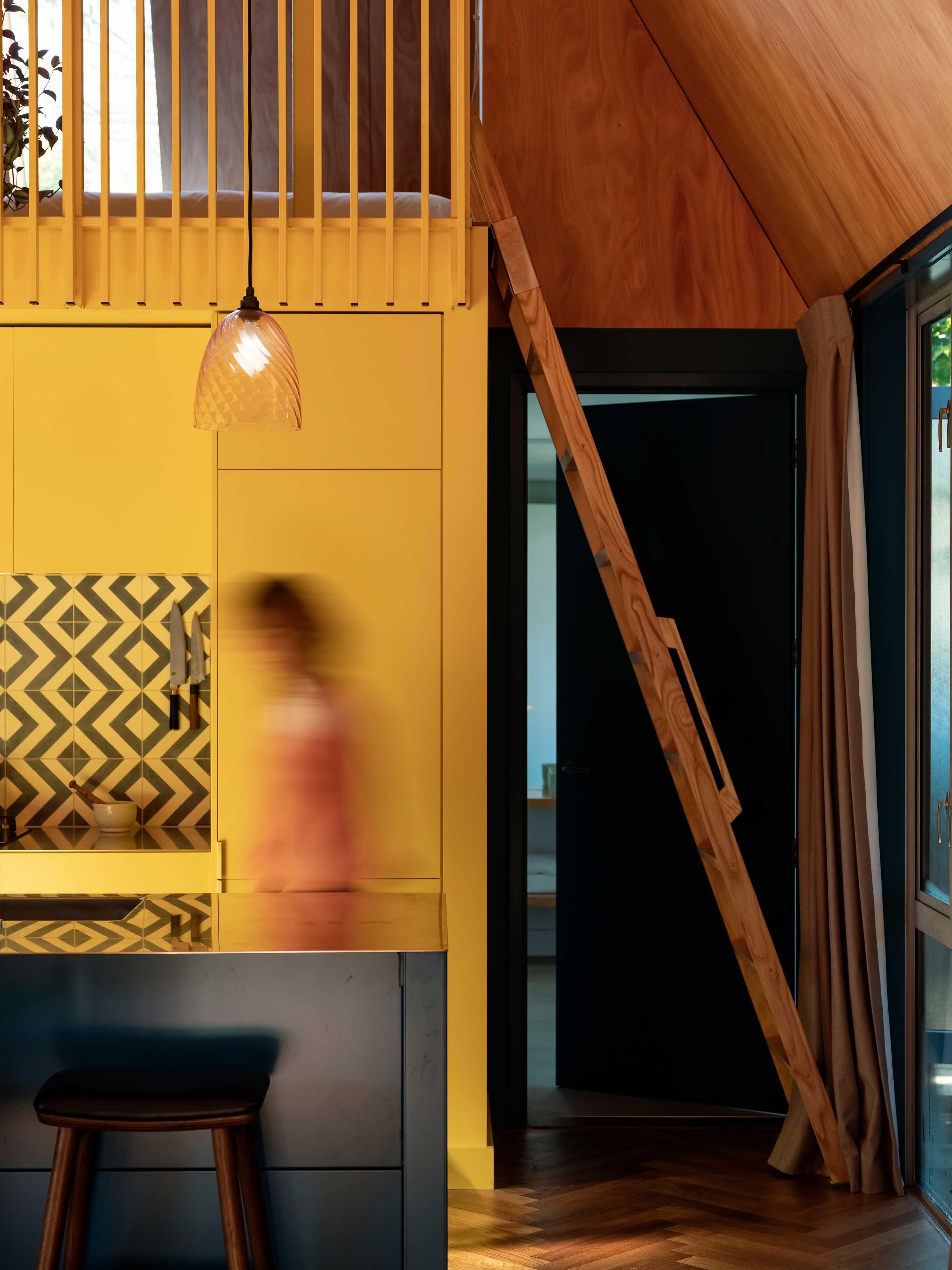 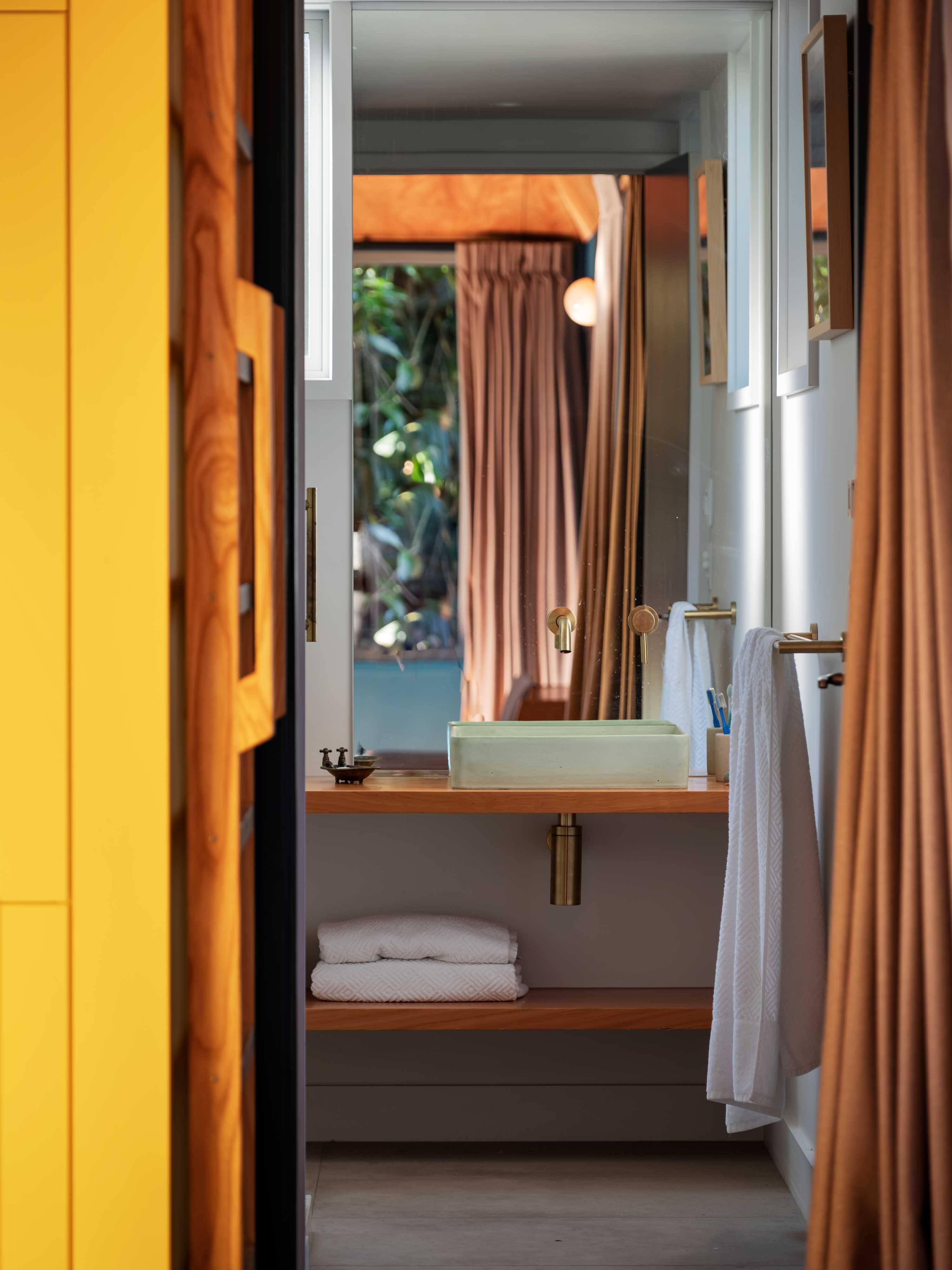 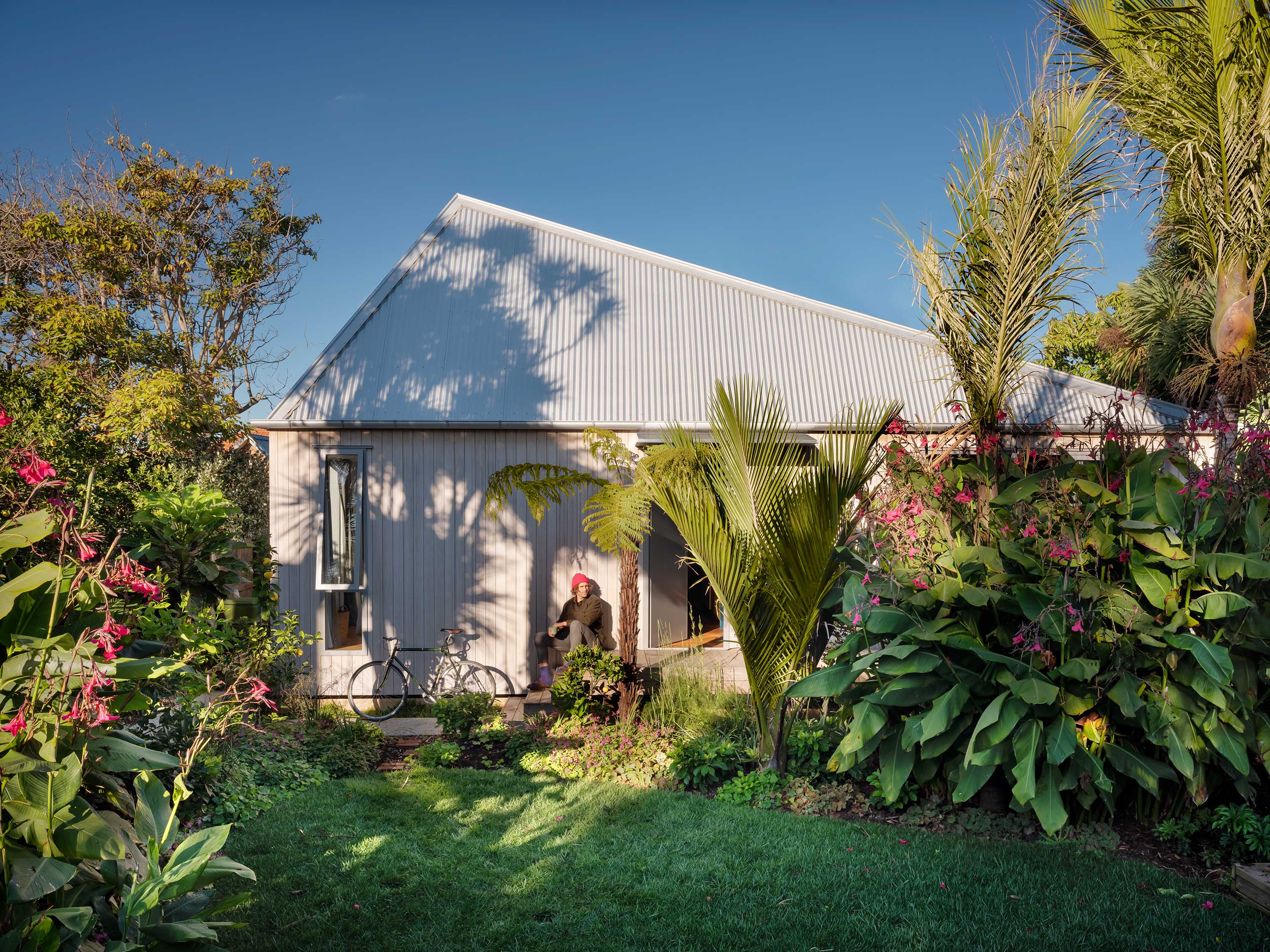 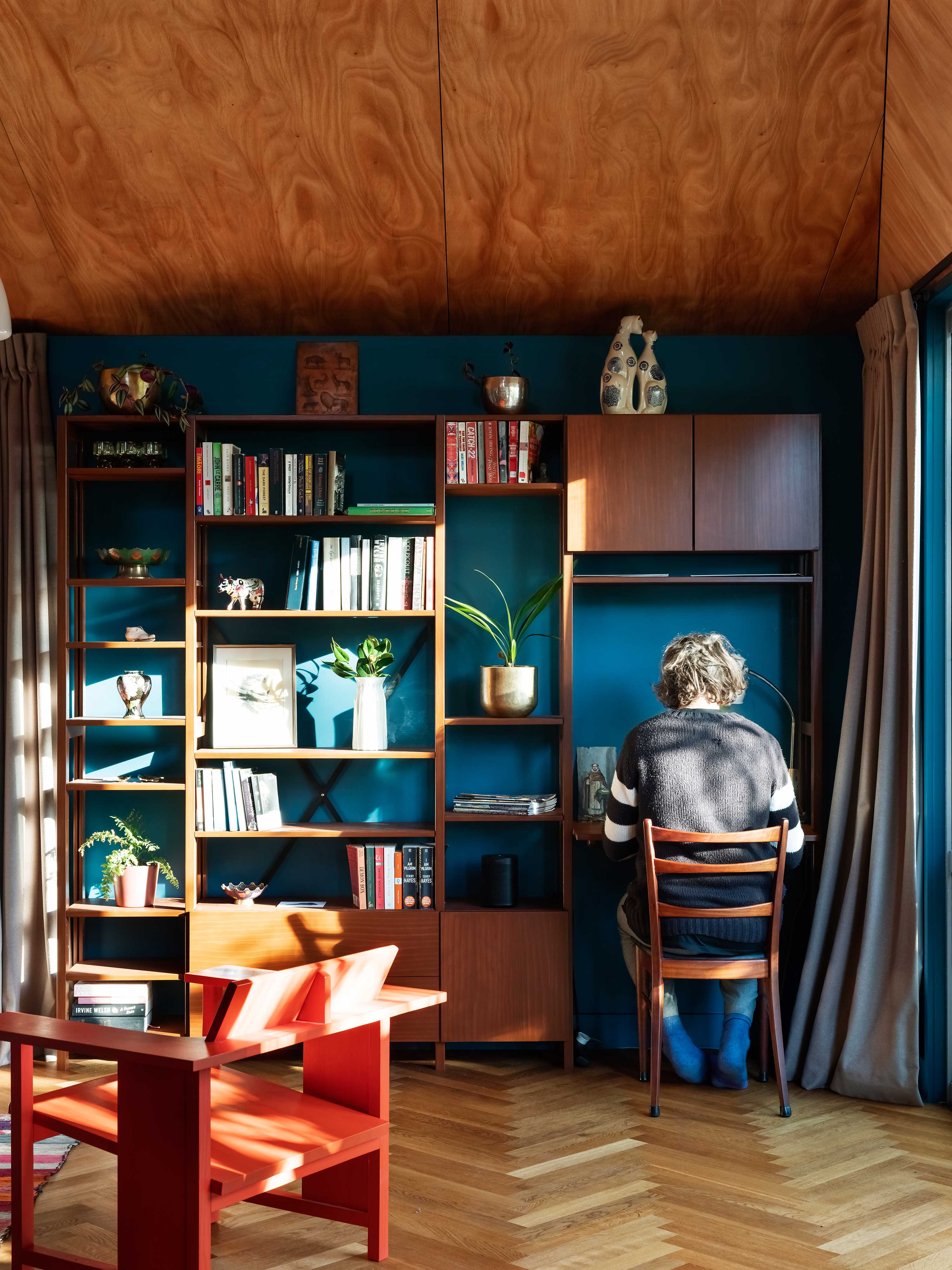 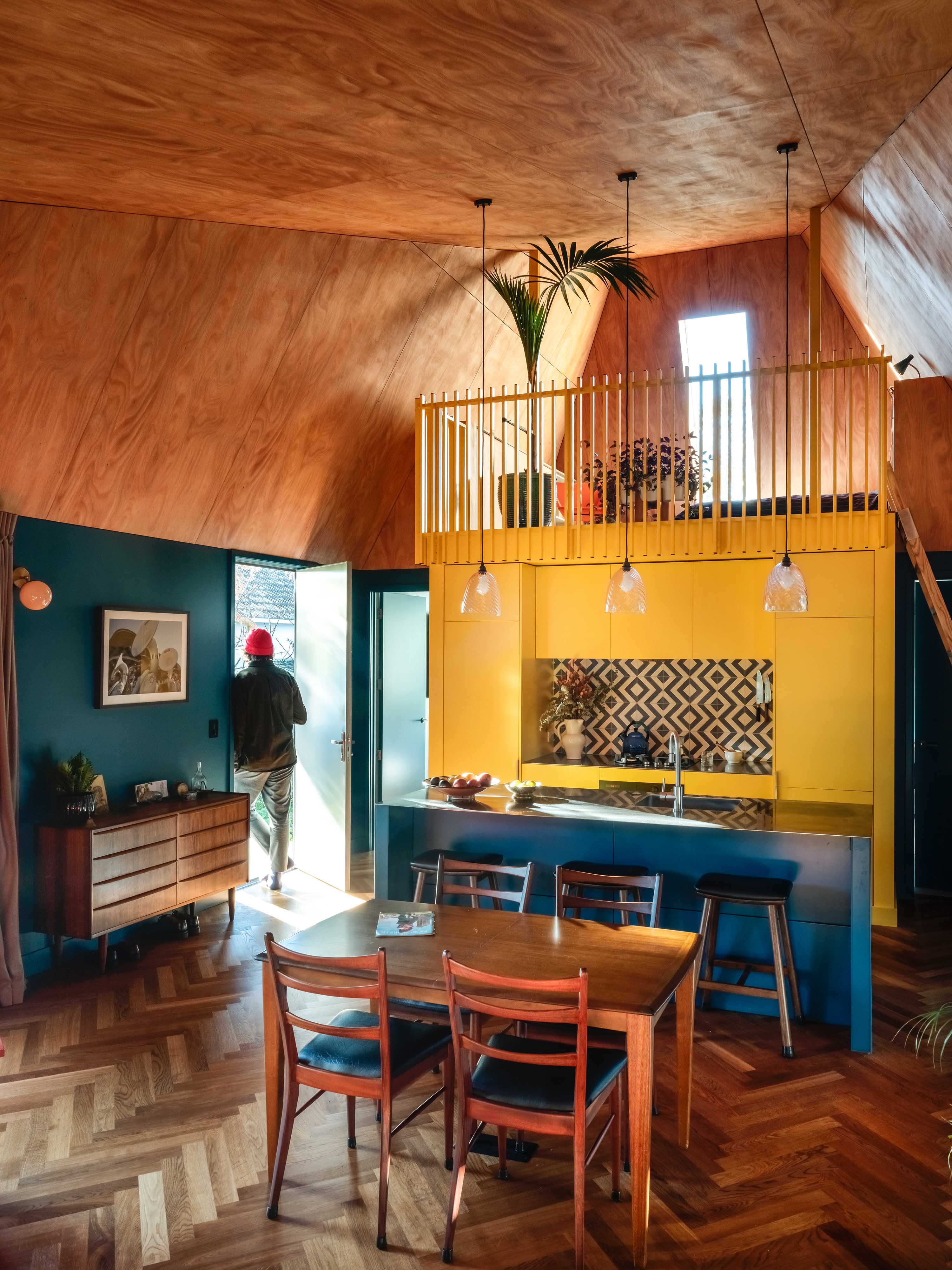 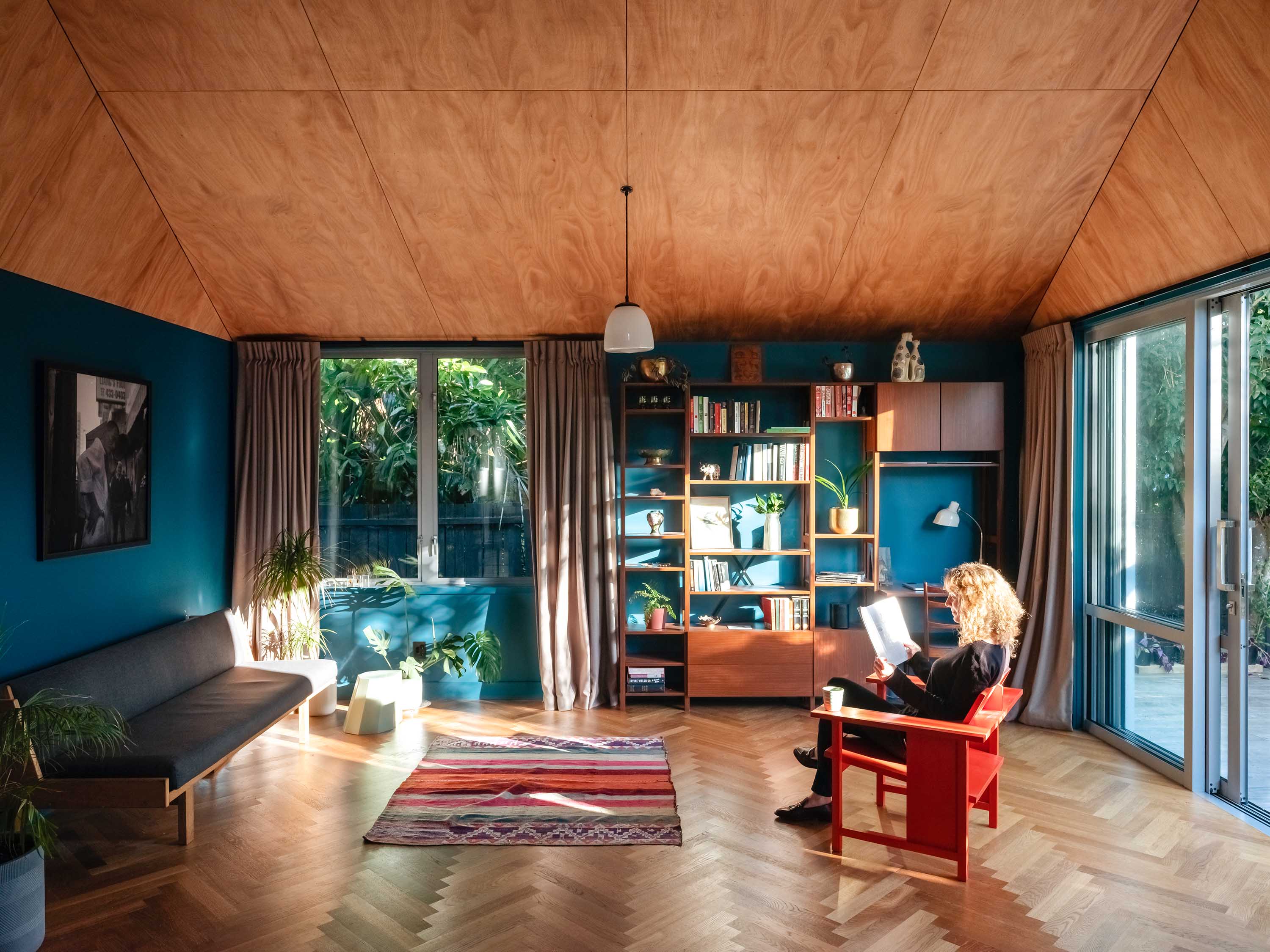 That’s quite a bit of intellectual firepower to bring to the design of a house occupying 63 square metres (plus deck) of a Sandringham backyard. But the house wears this learning lightly. Pac Studio, in the half dozen years since its foundation, has steadily added to its portfolio in those familiar fields of Auckland architecture, suburban alterations and insertions. The practice knows how to satisfy the council’s zoning strictures without surrendering de facto design direction to the drafters of the Auckland plan. In fact, as with all creative endeavours, the existence of limits has proved to be a stimulus to an imaginative response.

The Heron House, which has taken the place of a backyard shed, is aligned east-west across the rear of the shared site, separated from the main house by a lawn and partially screened by native and tropical planting designed by Claire Mahoney. Its one-room depth means the house receives the full natural lighting and heating benefits of its north-facing orientation. The home’s modest area is offset by its big volume, afforded by an asymmetrical hip roof. “I didn’t mind a small space, if it didn’t feel like a small space,” says Heron. The roof tilts up at its east end to encompass a mezzanine serving as an office or spare bedroom and reached by a folding ladder, a space-saving feature of many Pac Studio buildings.

The house presents a mute face to the west, but its east-side windows on the ground and mezzanine floors frame views to Maungawhau Mt Eden. (You forget how strange and surprising is the prospect, in an inner-city suburb, of a volcanic cone.) Throughout the interior, spatial clarity is abetted by material simplicity. Having won all that volume in the main living area, the architects weren’t about to lose any of it to trusses and rafters. The timber-framed building is supported by two steel beams and a couple of steel columns. The interior ply cladding of the ceiling and walls also serves to stiffen the structure.

The architects specified economical, unfussy materials: plywood lining; plasterboard in the ground-floor bedroom; aluminum for the mezzanine railings. The exterior cladding is an Abodo timber; the APL sliding doors are framed in Zincalume; the insulation is recycled polyester. Blocks of colour are sparingly used – yellow for the kitchen wall, and client-selected blue in the living area. Some photographs from Heron’s collection are displayed on the walls, and several pieces of his modernist furniture complement Pac Studio’s design.

So, what to learn from this intervention in H5 Sandringham? Friends can help; keep it small; discipline your desires; and – if you can – find an architect who will give you what you need for what you’ve got, and who will work with you to design a house that’s not just real estate but, in Mulla’s description of Heron House, “super-fun”.

Visit Heron House at our next Open Home on Saturday 11 September, brought to you in association with Dulux. See here for more detail and here for tickets. 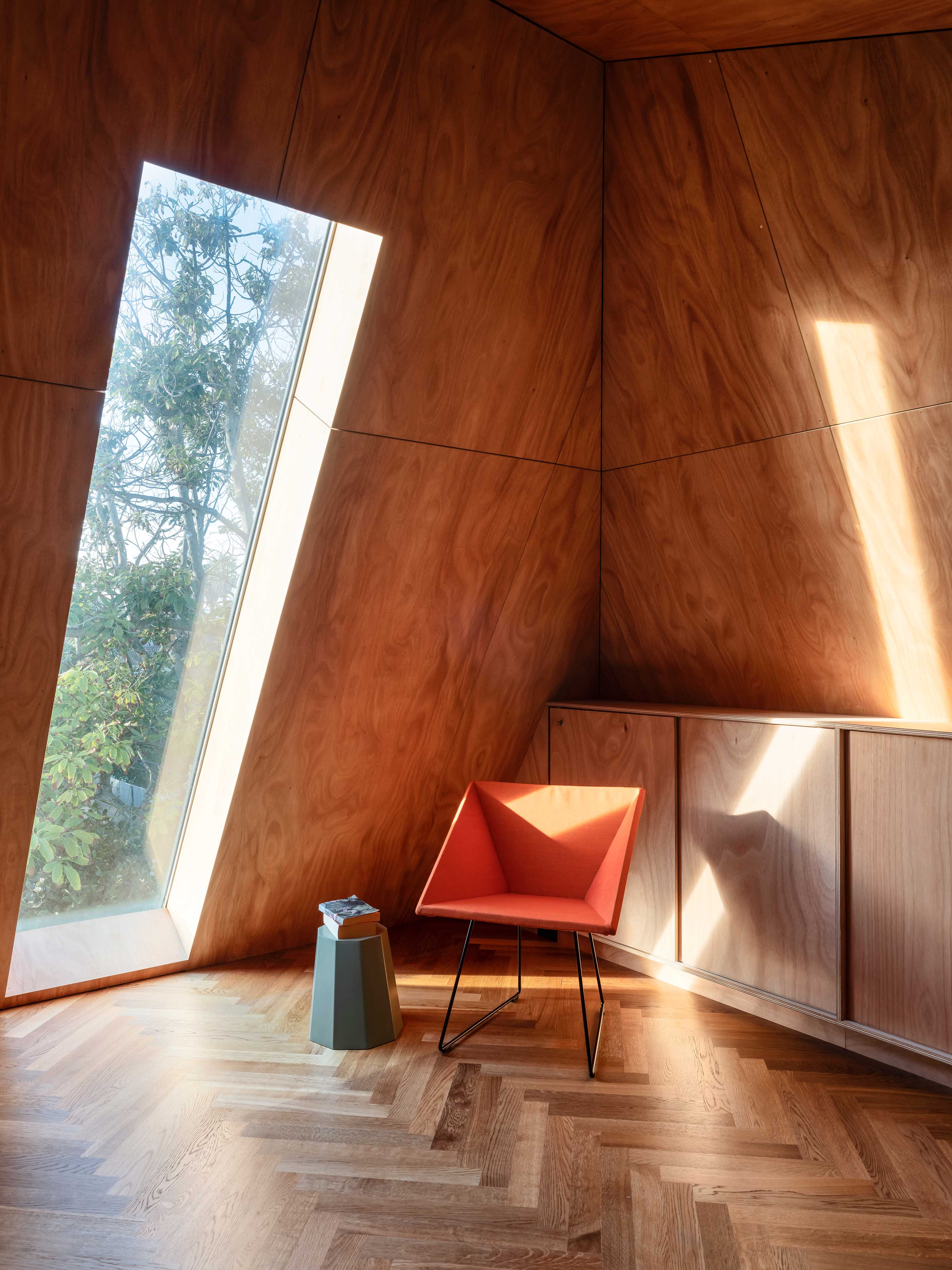 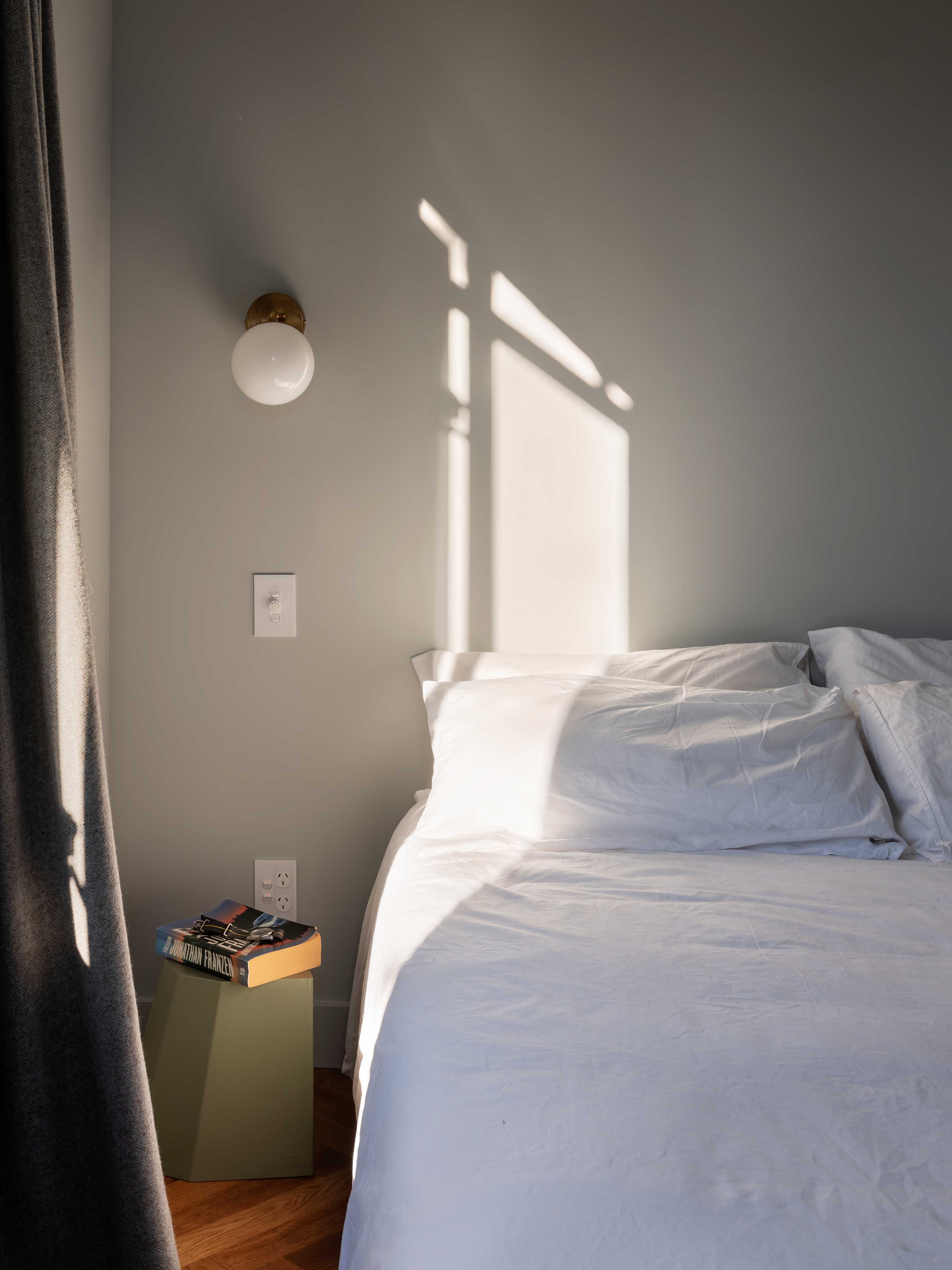 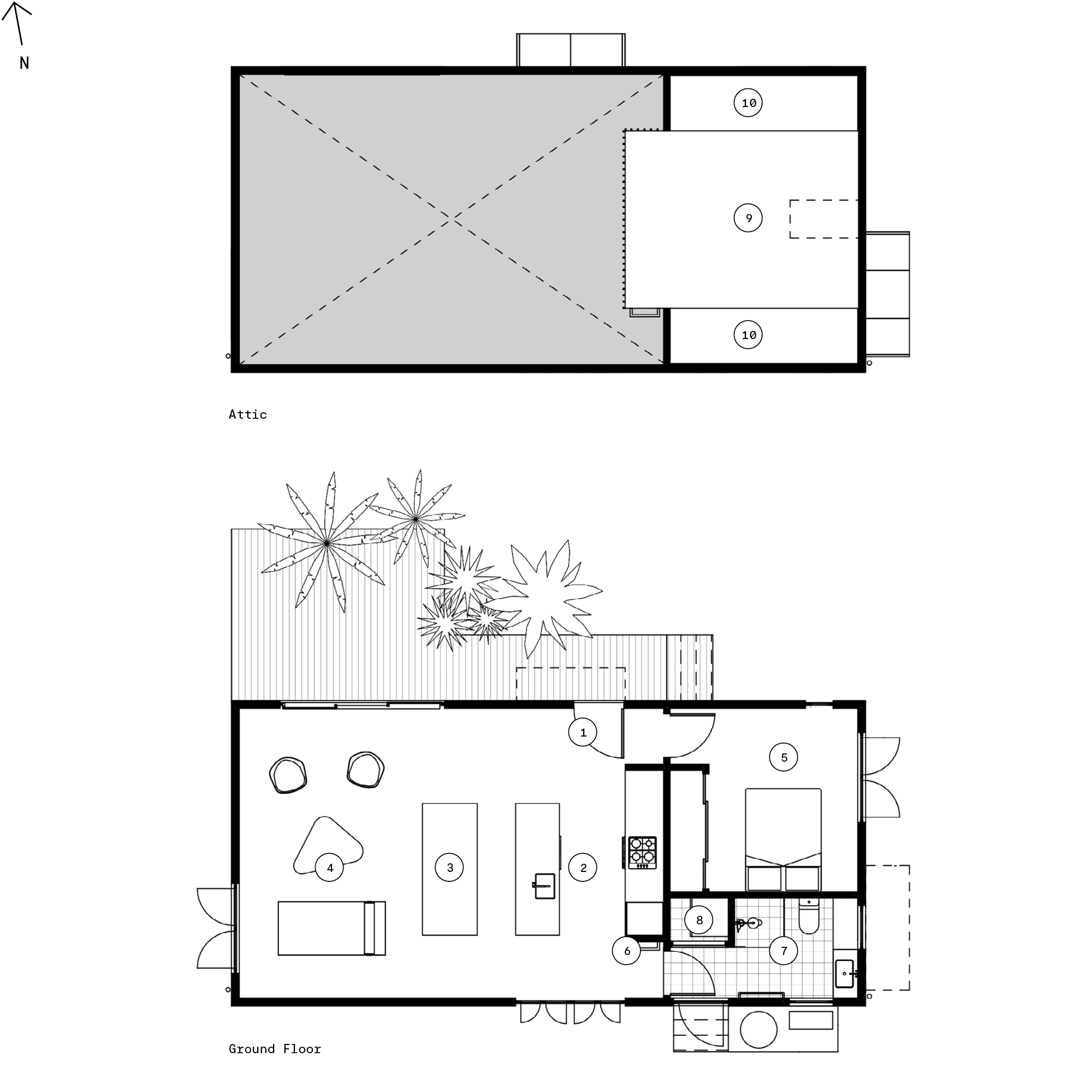