Designed with a focus on taking time and slowing down, this beautifully resolved coastal escape gives itself over to the rhythm of the landscape. 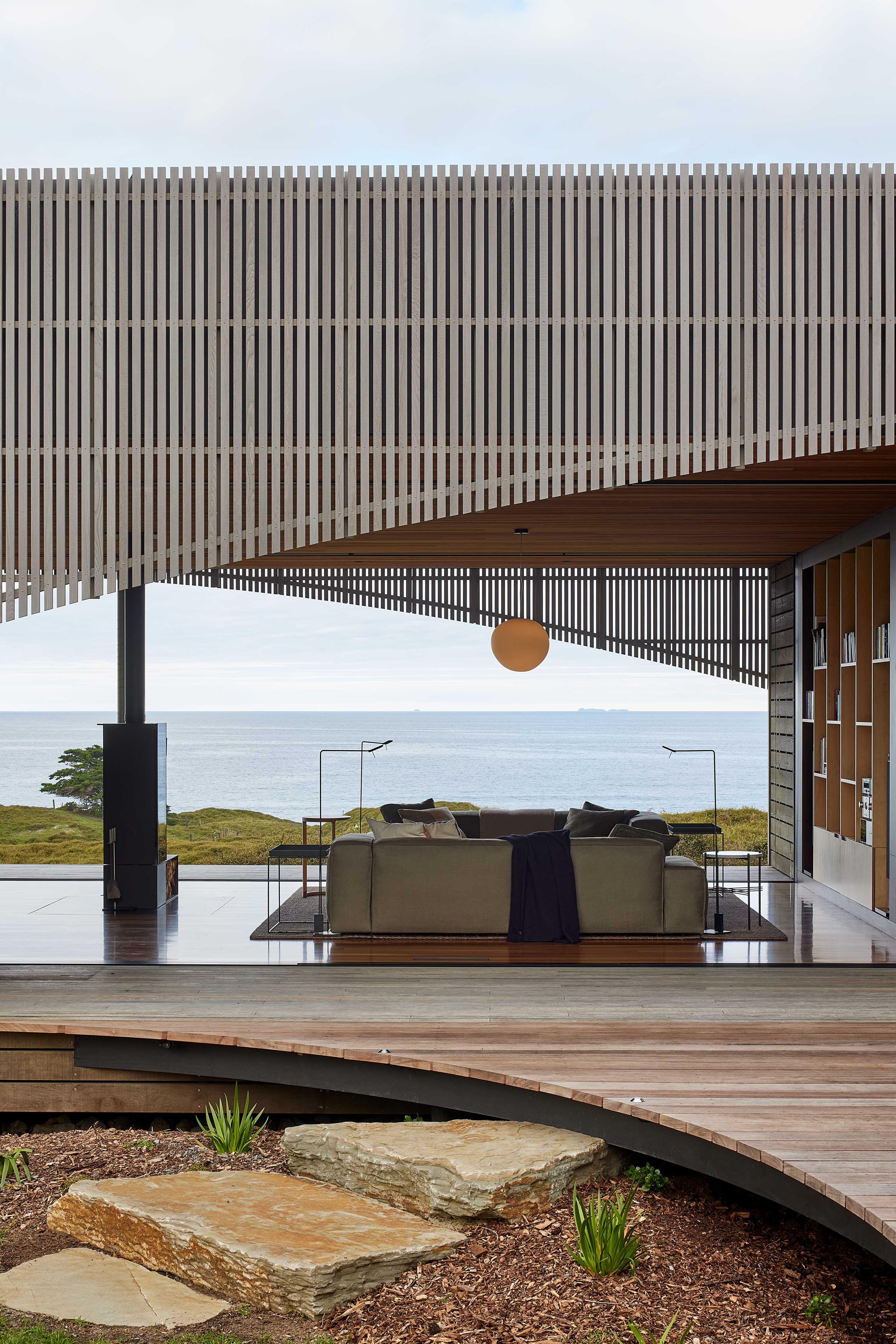 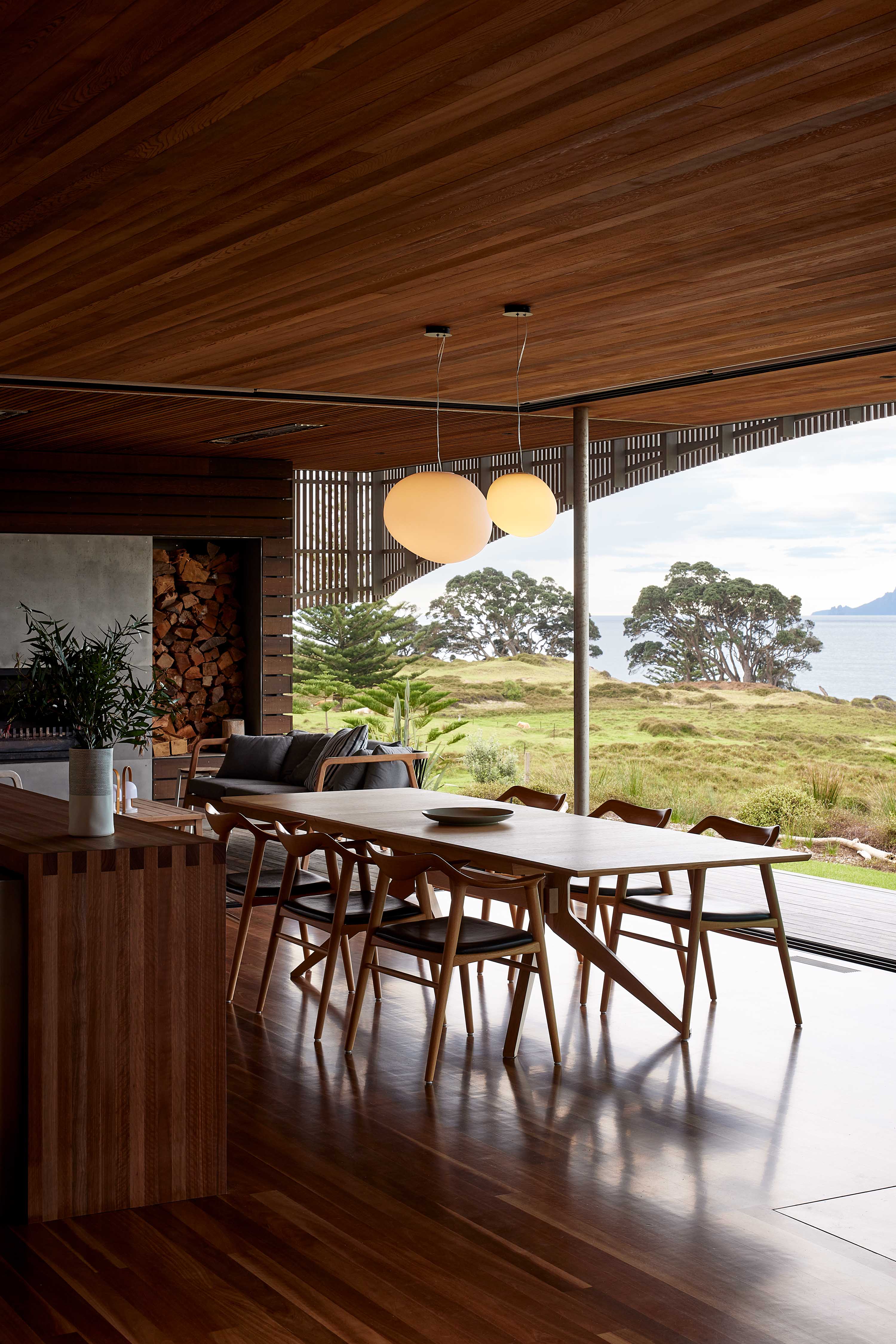 In the past couple of decades, beach houses around Aotearoa have slowly inflated in size and scale. Escalating property prices and more ambitious budgets have led to bigger and bigger houses, with more and more functions jammed into them – and even the most luxurious or beautiful of homes lack the poetry of simpler buildings from previous decades.

At the same time, over those past couple of decades, architects Lance and Nicola Herbst have managed to convince their clients to move in the opposite direction, producing sophisticated, increasingly luxurious houses that manage to resist the usual programme. It’s quite an art: far from basic, these are unashamedly luxurious buildings. Lance Herbst once described them to me as the architectural equivalent of a convertible in California with the top down, which I took to mean unencumbered, free; more luxury resort than suburban enclave. “It all boils down to the fact that you’re at the beach,” he says. “All the rituals of these houses are related to the fact that you’re time rich when you’re there.”

When it came to the house you see here, the Herbsts, along with project architect Hannah Sharp, had their work cut out for them. Not so much from their clients – who were on board with the idea of stripping things down, and scattering guest rooms in a couple of buildings further back – but from the site and its planning restrictions. “Many overlays,” says Sharp simply. A four-hectare block with direct beach access, there are few neighbours and a panoramic view across the ocean. Rolling dunes, covered with muehlenbeckia, lead down to the beach. In other words: spectacular. But the better the view, the higher the stakes. Here, it was a condition of consent that the house sit a full 200 metres from the high-tide mark, preserving the view of the landscape from both the beach and the water. “That gave us a hard edge, because the clients wanted to be as close to the beach as possible,” says Herbst.

The architects first visited after the clients had agreed to buy the land, but while they were still doing their due diligence. The attractions were obvious, but so were the challenges: standing on the setback line, you could see that it fell on a low point on the site – building there would mean no view from at least part of the house. And if there’s a bottom line to building a house like this, it’s that you must be able to see the sea. That meant building up. Herbst was reluctant to go to the maximum height in such a landscape, so they stood on ladders, climbing until the clients felt they had enough view, before putting in posts to show the height in the landscape. “That gave us two locks,” says Herbst, “the 200-metre mark and the floor level.”

The obvious solution would have been to build a two-storey house, with the living spaces on top, to get the view. But here? In this landscape? “On a site this size it just makes no sense living on a deck up in the air,” says Herbst. “And then you’re dealing with a double-storey object in the landscape, which is really nasty.” Instead, Herbst designed a single-storey building and put it three metres up in the air. Around and underneath that, he proposed to “recontour” the landscape, bringing the land up to the house. The clients were game – and they were also amenable to the suggestion that they leave their cars at the gate, making their way around the site on a series of timber boardwalks.

From there, the design called for a sharp, square profile, softened with curving timber rainscreens that mimic the undulating dunes. They swoop and flow around all four corners of the house, drawing down on the edges and creating arches over the doors in an elegant, abstract sort of a way. Inside that, there’s a narrow verandah on two sides, and a fully enclosable lanai – or outdoor room – at the end. The rainscreen shields the building from the wind and the sun, and there’s further protection thanks to a series of sliding screens with horizontal battens, that creates a latticework effect around the outside. On a fine day, you can push everything back and look through the narrow living spaces to the sea. On a stormy one, you can close everything down, light the fire in the lanai and get out of the wind.

The result is breathtaking. You come through a working rural landscape, down a rutted dirt road, and pull up a good way from the house. Timber boardwalks wind through a garden, and the house sits gently above a rolling lawn, connected via casual timber steps. It feels grounded, connected: your approach slows, and so does your pulse, before you reach the house. Inside, it’s soft, restrained – there is plenty of shadow, and that’s a good thing. The detailing is exquisite, beautifully restrained, employing a handful of materials: timber ceiling; stained birch-ply walls; elegantly expressed, butt-jointed skirting boards around the corner. “With so much glass, you want to create as much weight around you as you can,” says Herbst. “You’ve got to hold that space – or otherwise it just floats out.”

In the main house: enclosed lanai at one end, open-plan living in the centre, a bedroom at the far end; behind, accessed via an outdoor corridor, there’s a further bedroom or study, a bathroom and a laundry. Most spectacularly, there’s a bathroom with its own “bathing court”. Here, in contrast to the rest of the house with its floor-to-ceiling sliding doors, the view is of a solid timber wall – and the sky. “People need to be naked in bathrooms,” says Herbst. “It’s a feeling of vulnerability. People might walk by, someone might walk over the dunes – and you end up creating a closure line exactly where nature is.”

Instead, the practice builds bathrooms that open onto completely private courtyards, often with a bath placed outside, but still open to the elements. In this space, green mosaic tiles line the floor and walls, and bifold doors open to the courtyard. It’s an oasis, almost a relief, in a big landscape – a deeply human move. “When there’s so much outlook, it’s really nice to have a closed space,” says Sharp. “It gives you that extra layer of shelter.”

The house is a couple of years old now – it’s taken that long for the landscaping to resolve, which adds another layer of privacy. In time, pōhutukawa in the garden will grow and soften, creating an oasis and a contrast to the muehlenbeckia-wrapped dunes, and somewhere to come back to after a day on the sand. “Before they built, they camped here with tents and caravans,” says Sharp, and there’s a sense of that casualness that prevails. “They were already figuring out how to use it.” 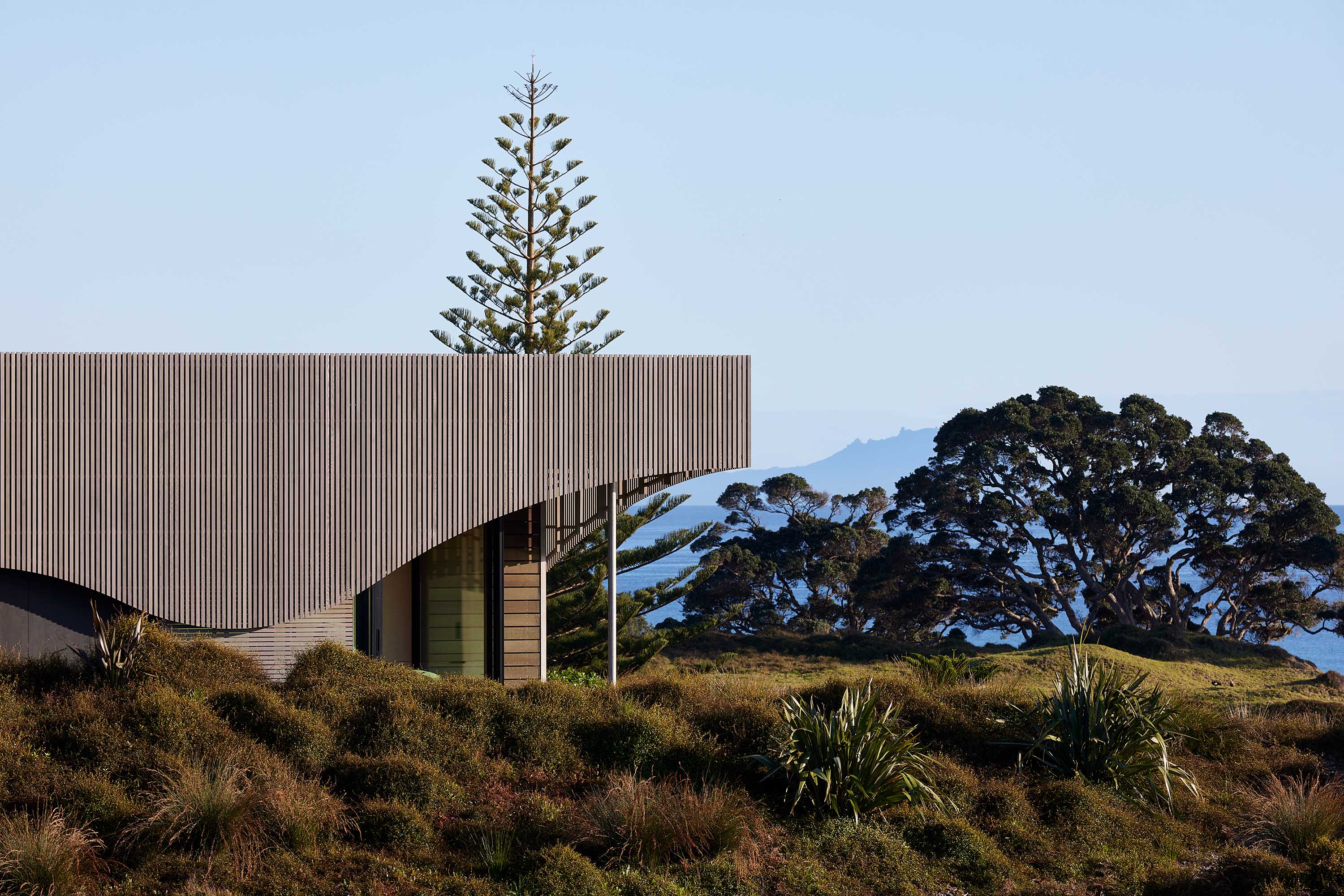 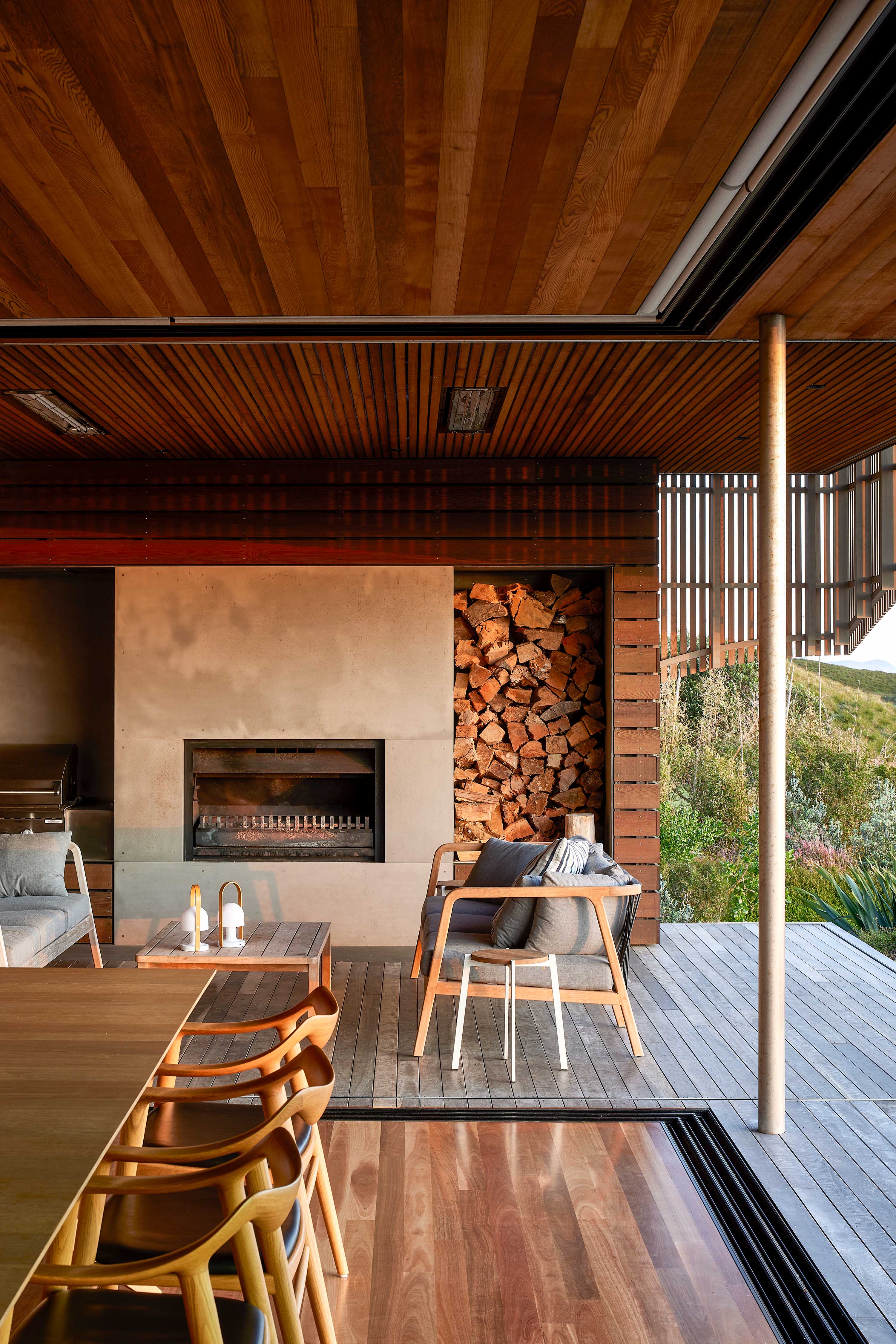 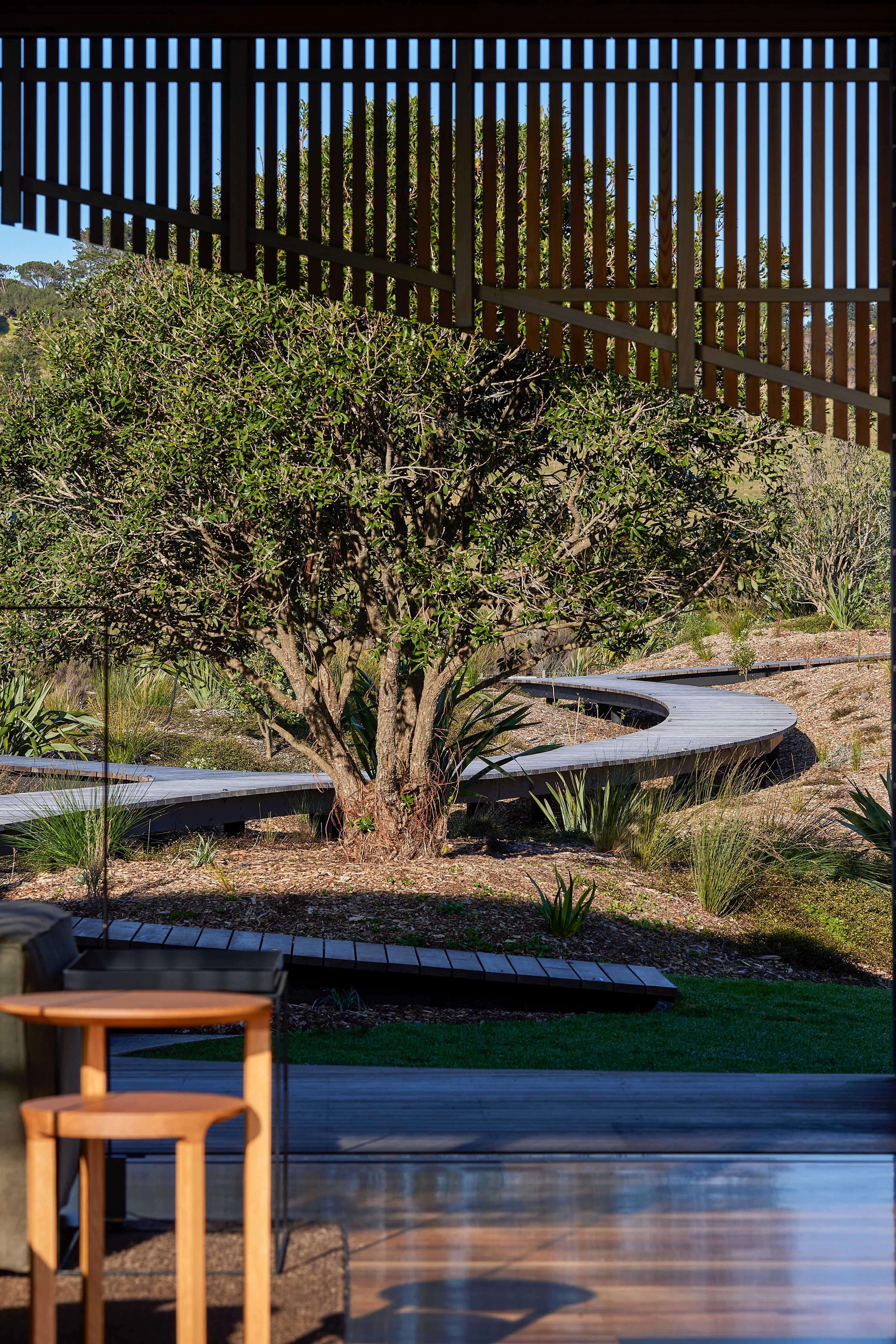 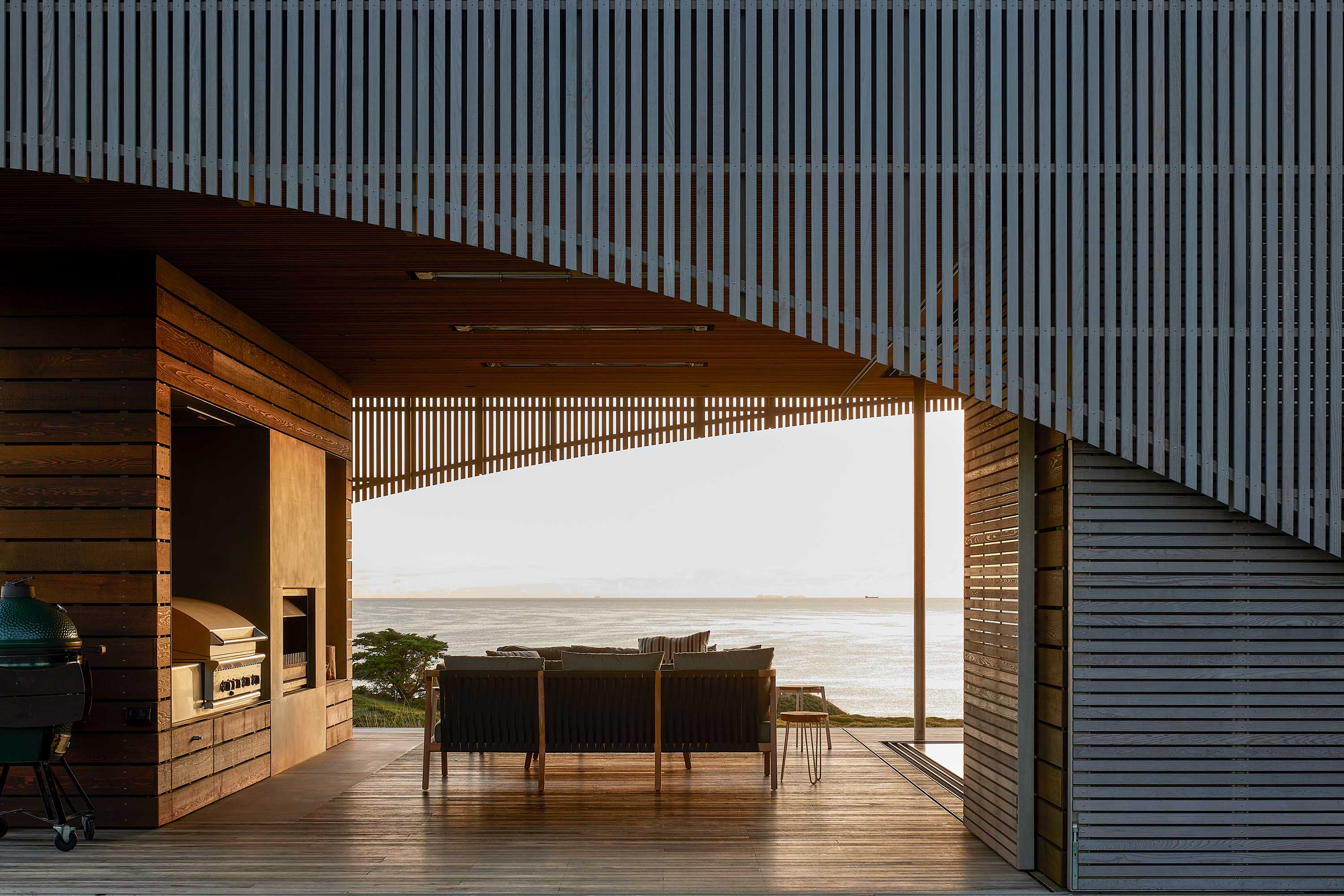 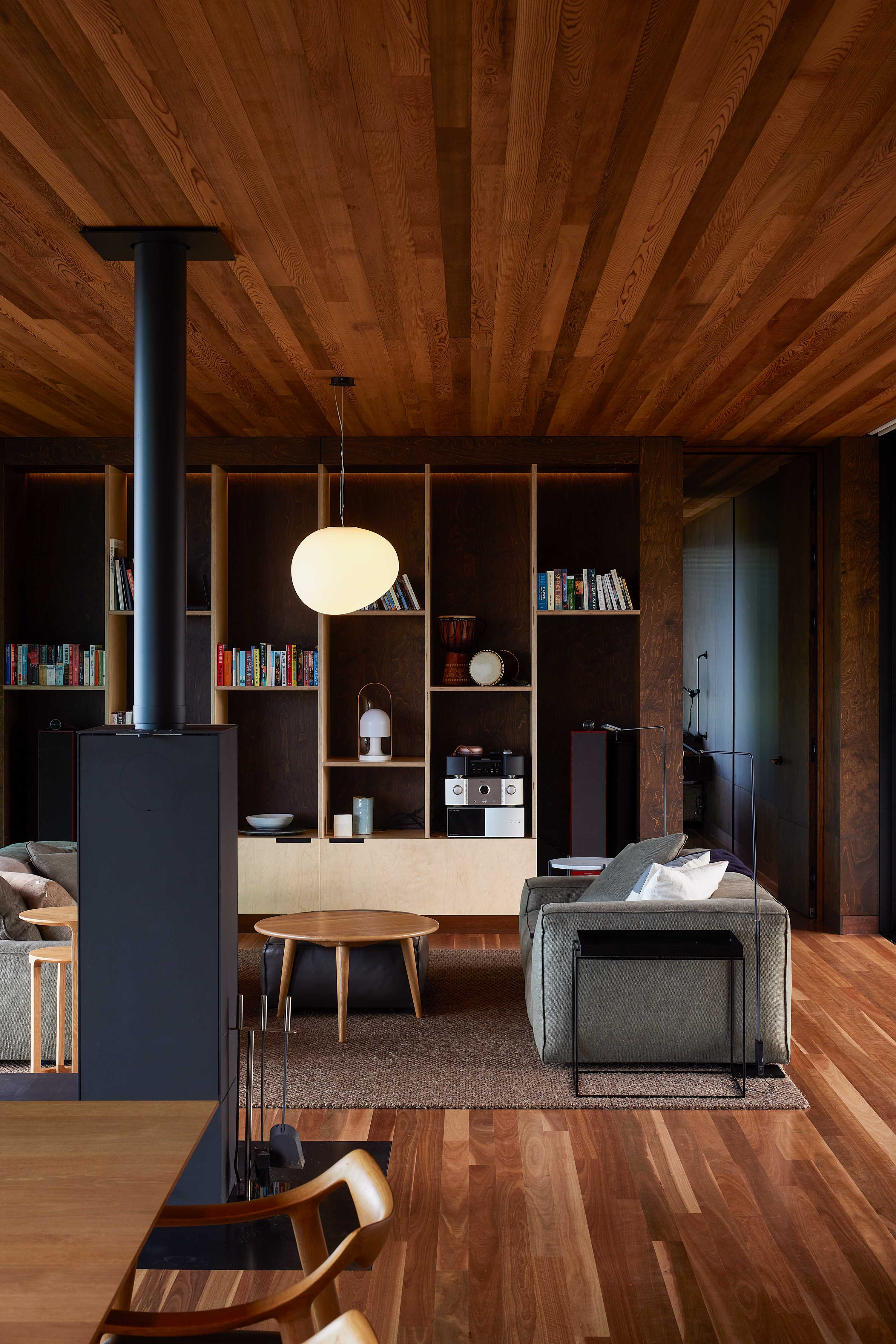 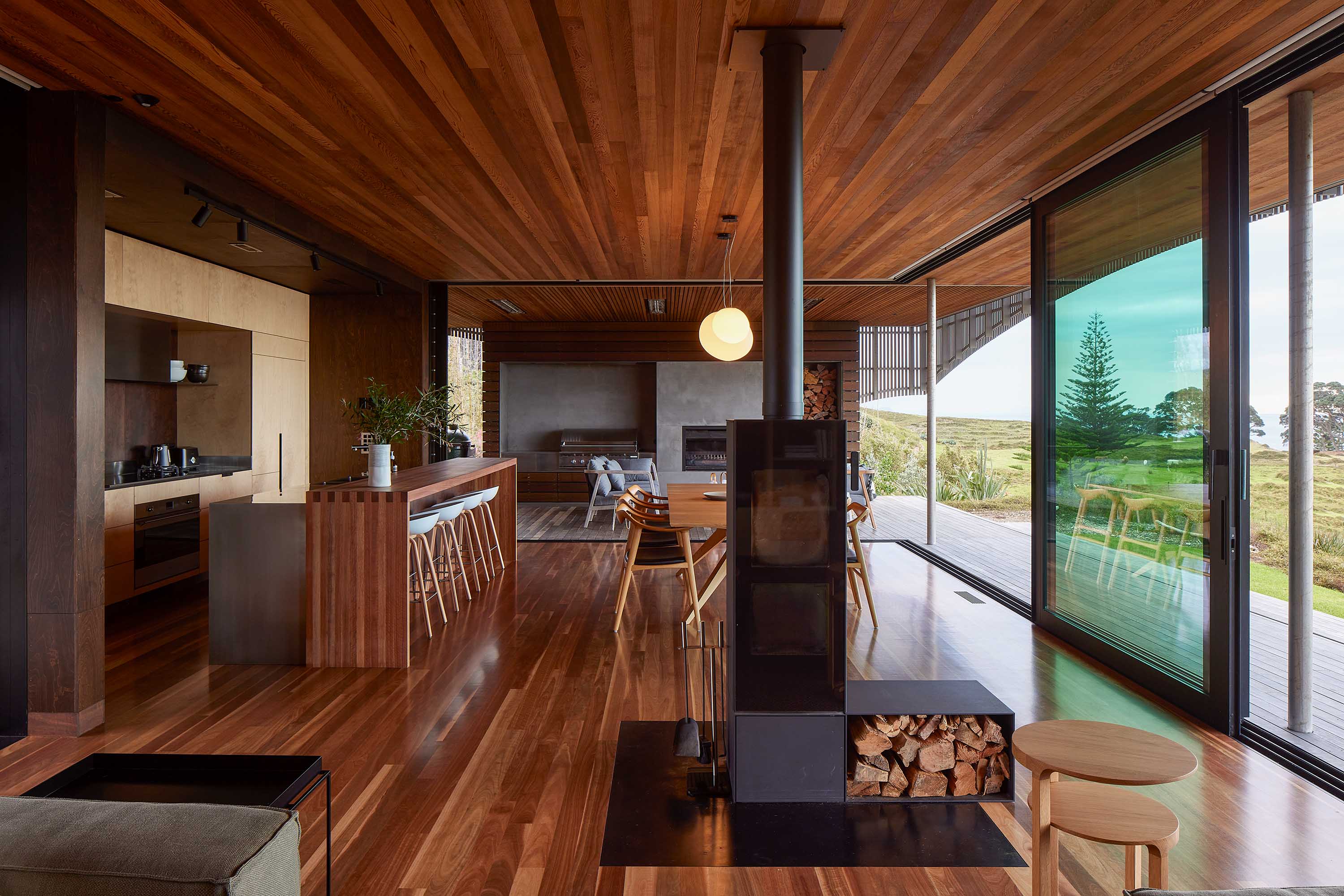 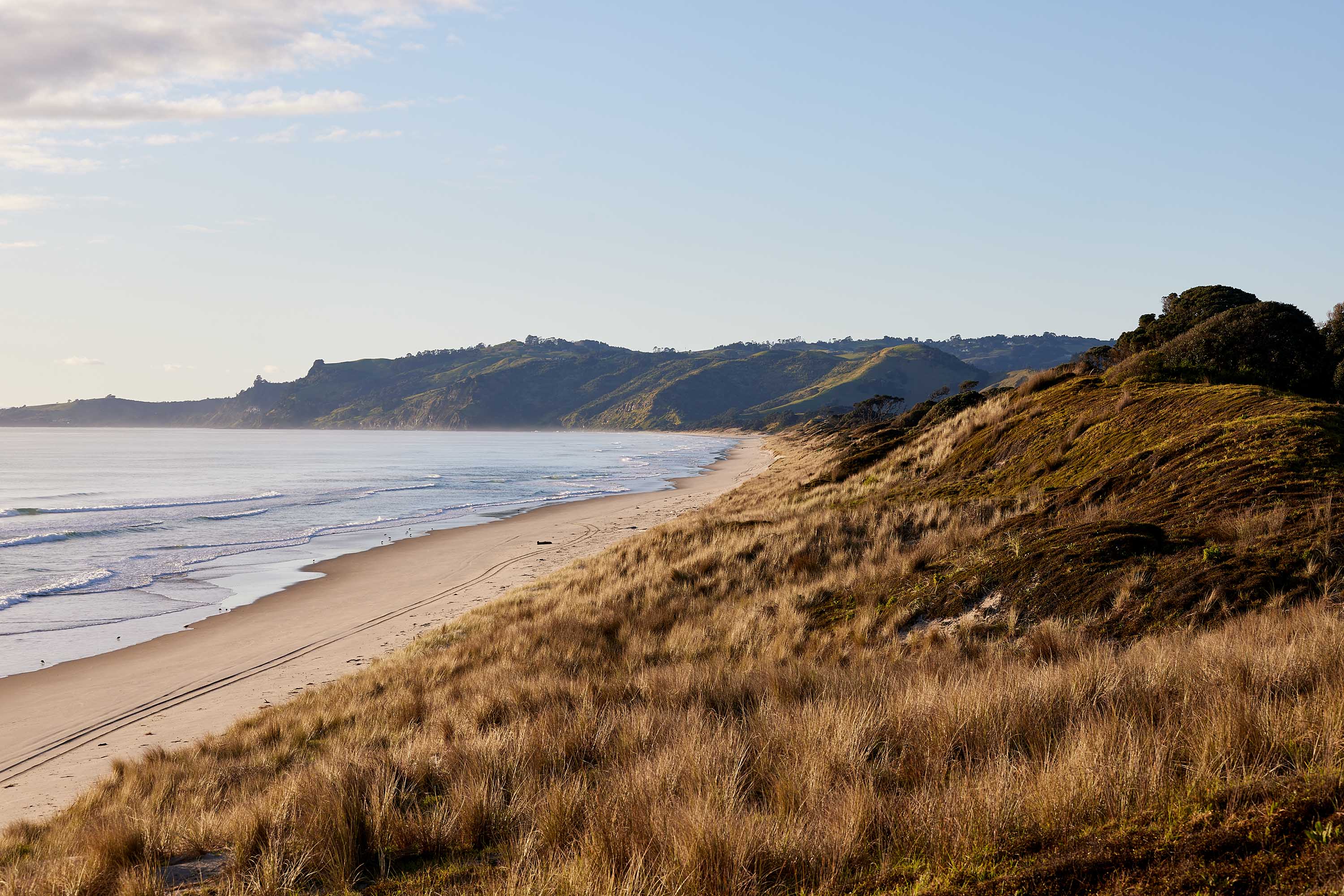 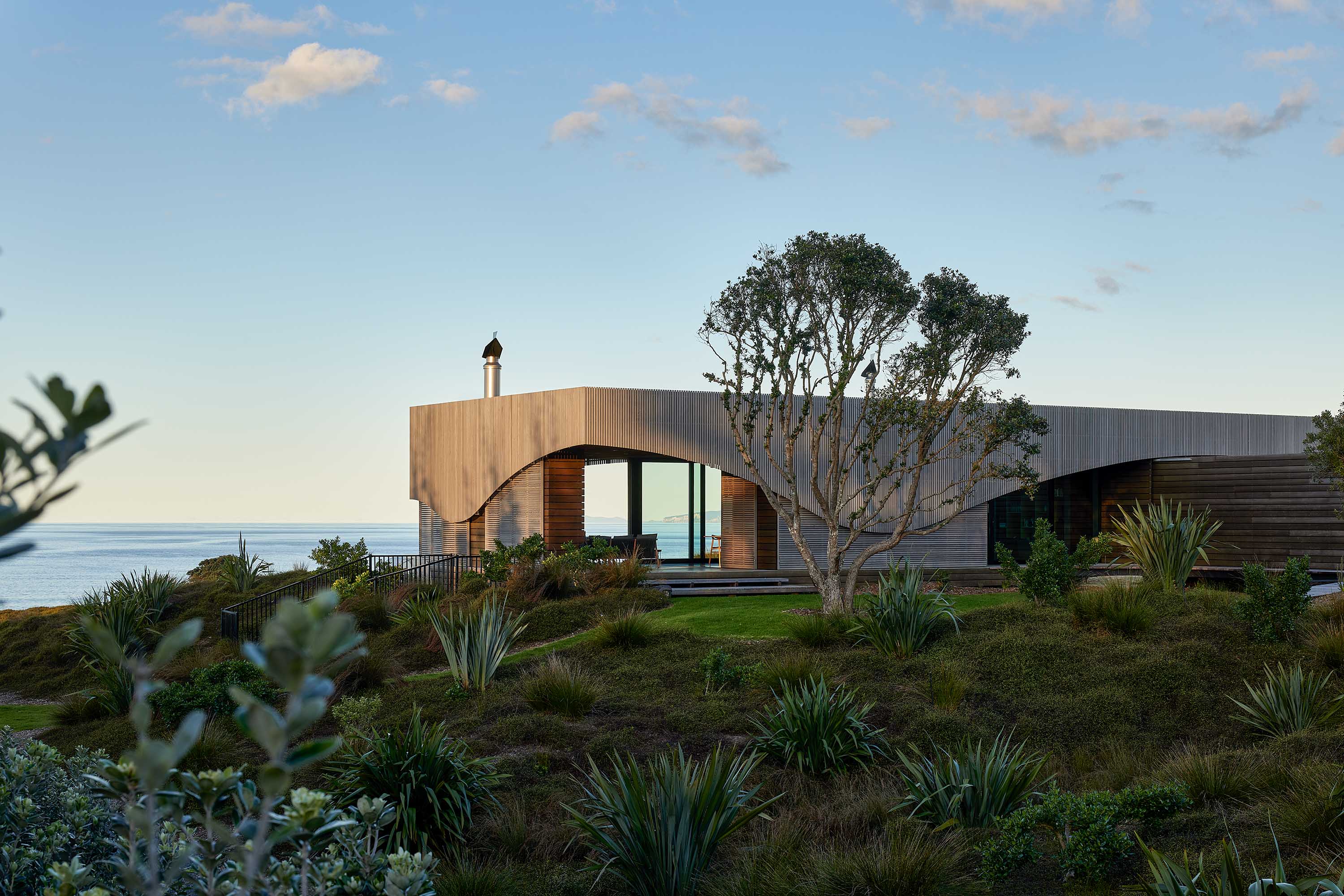 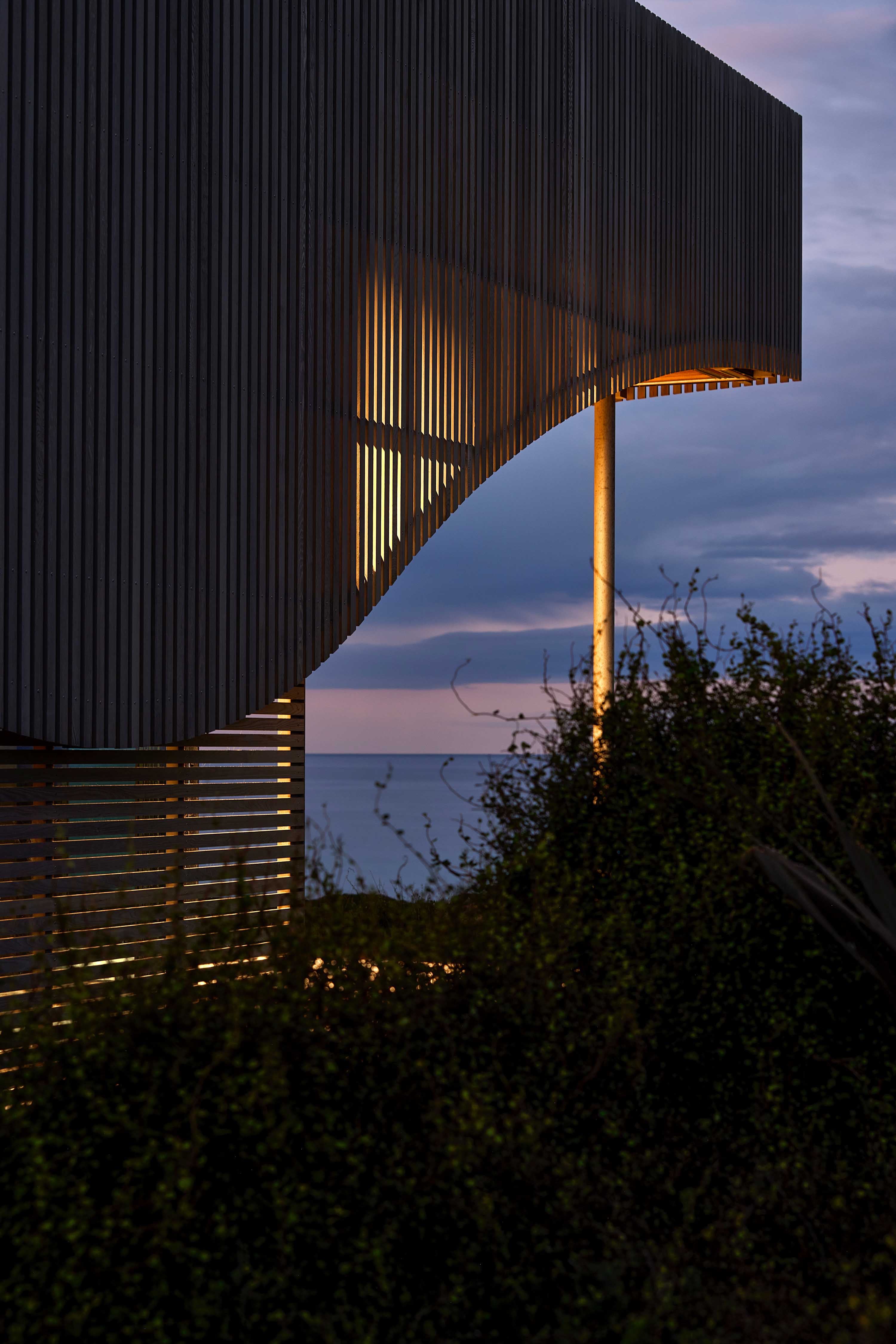 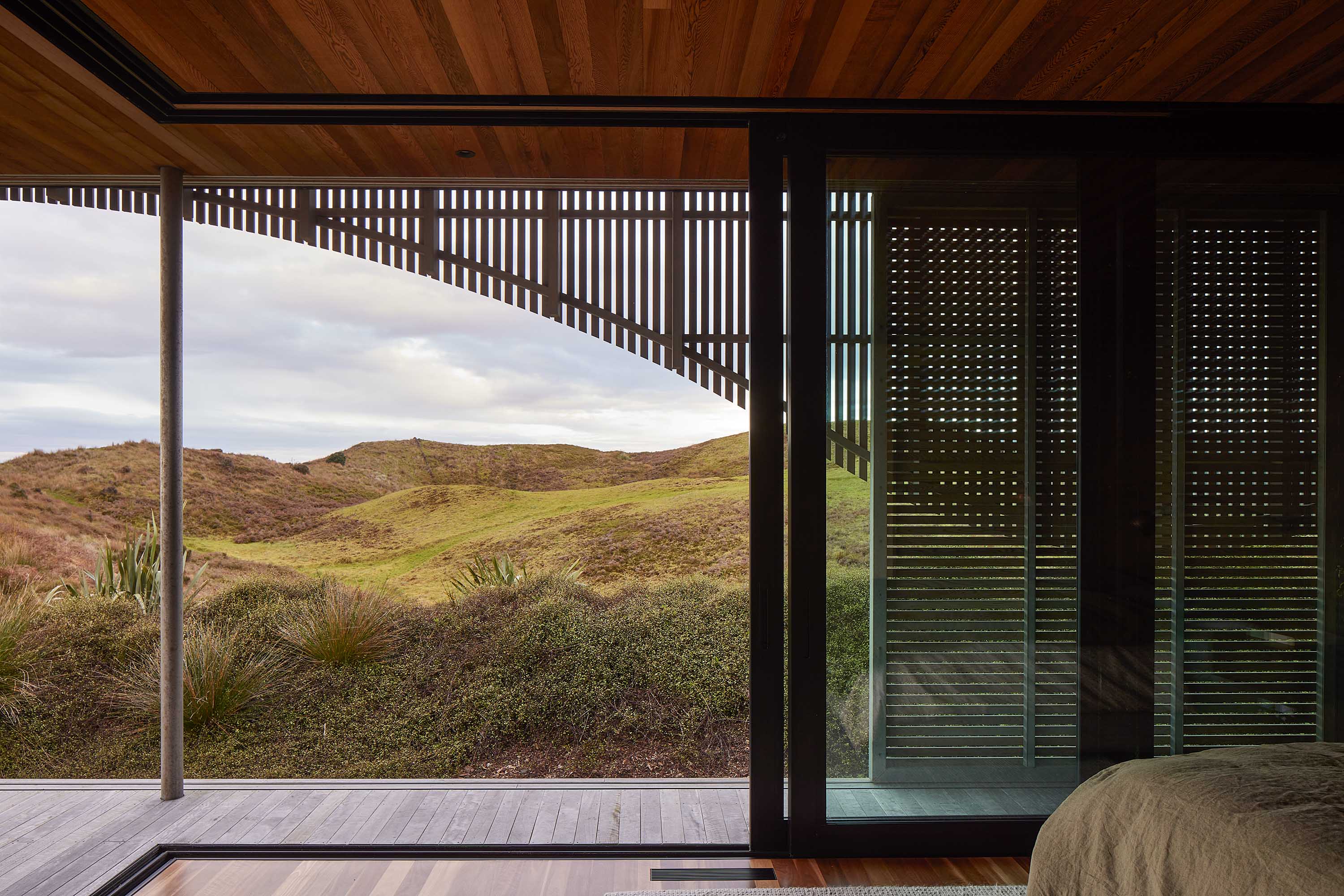 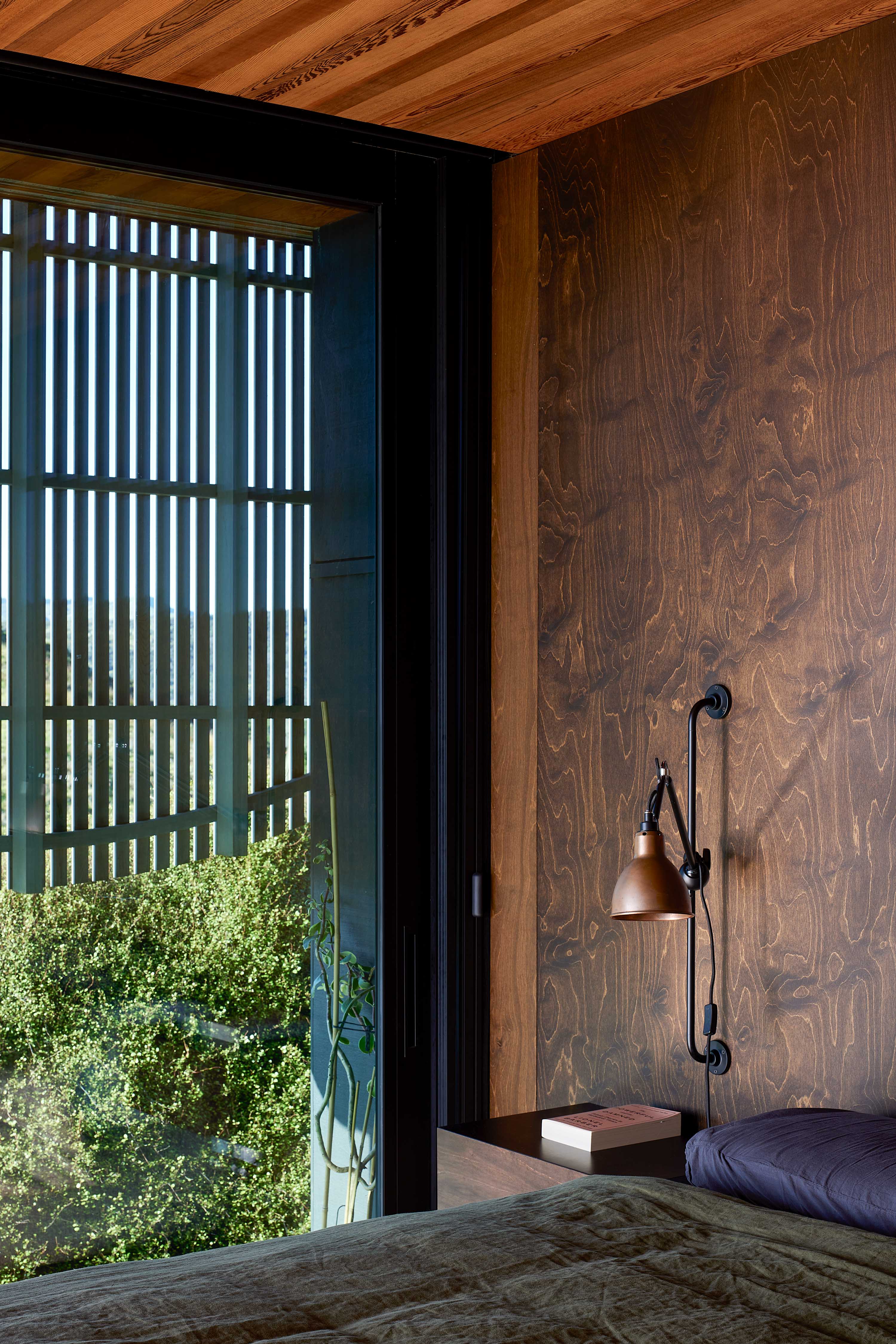 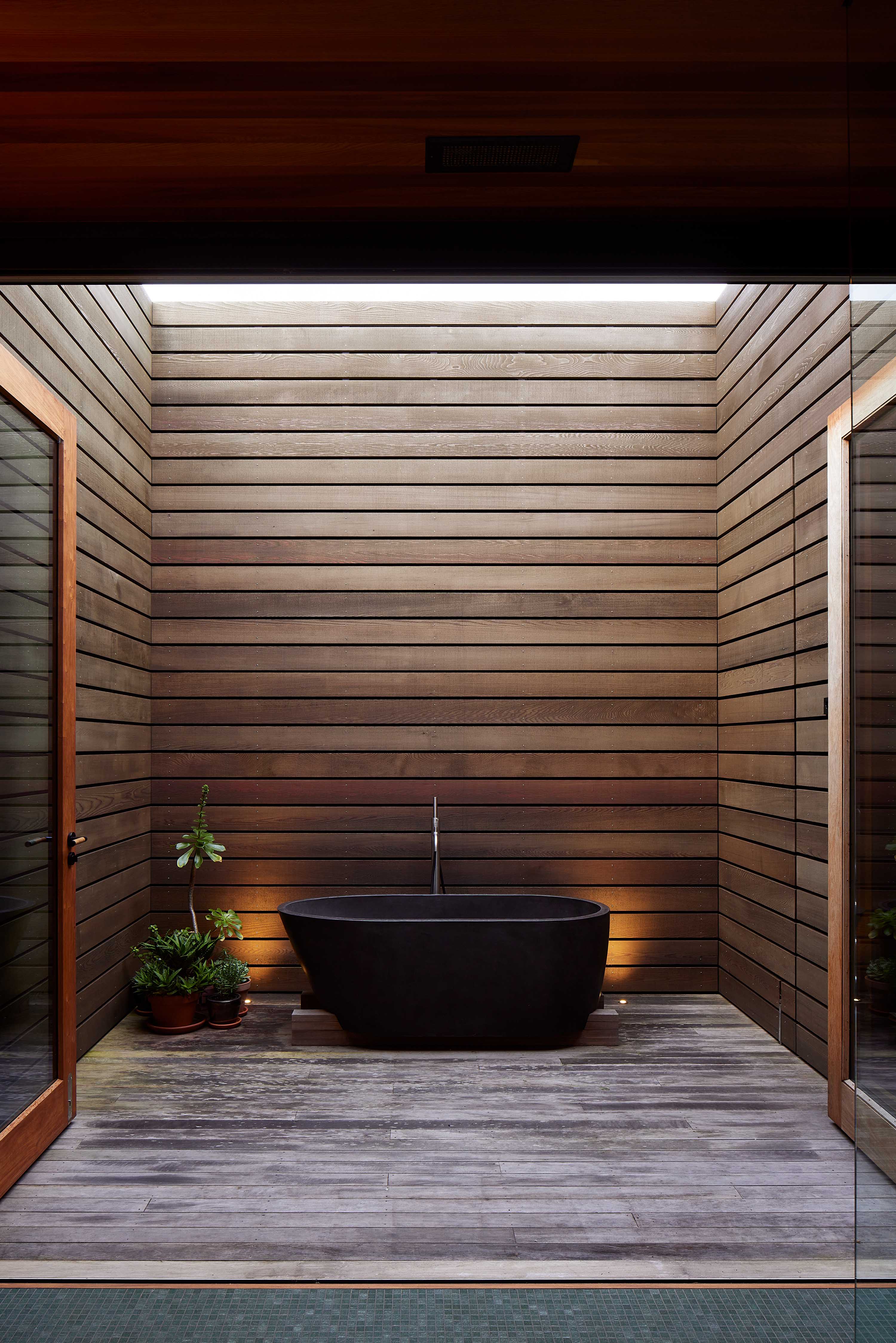 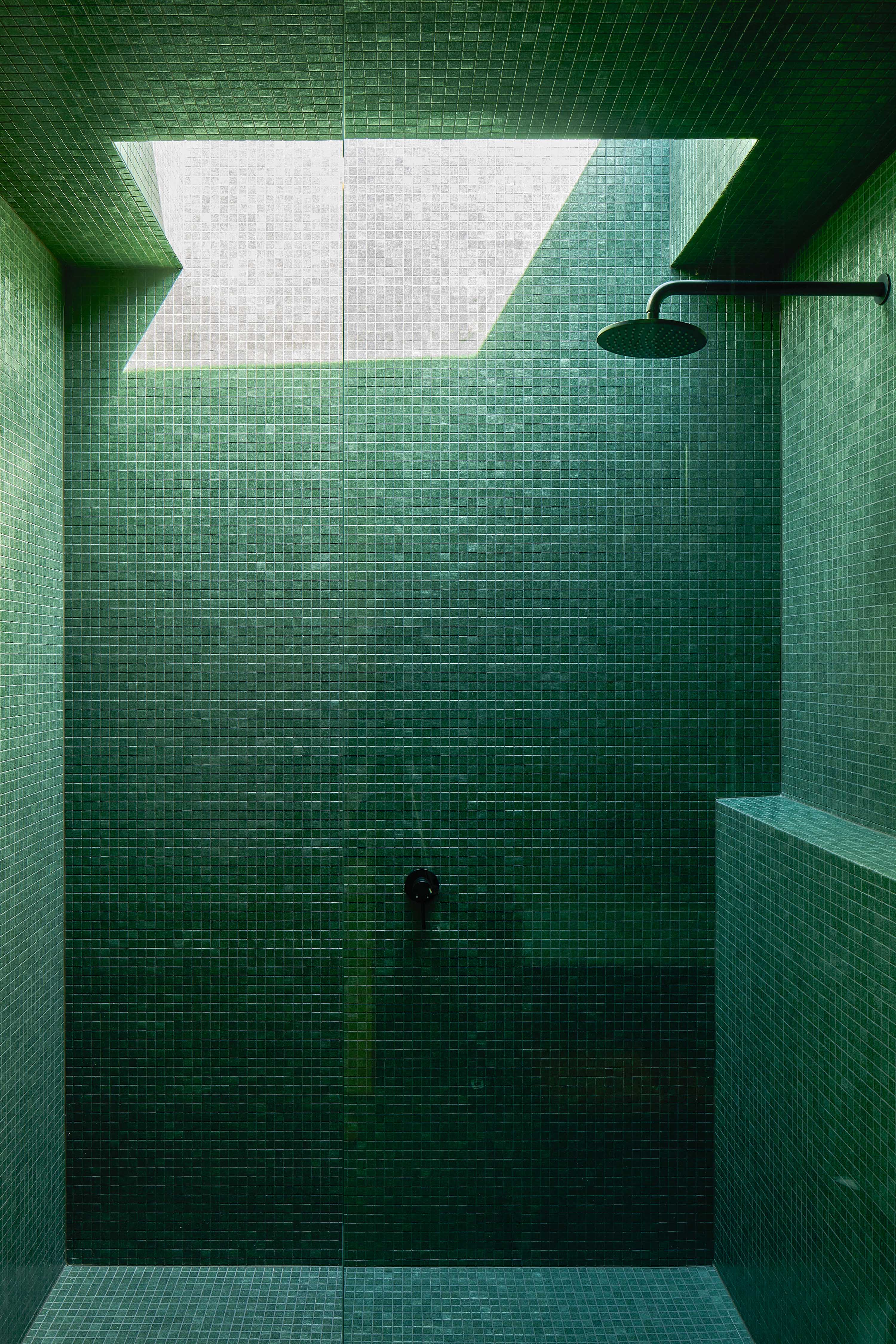 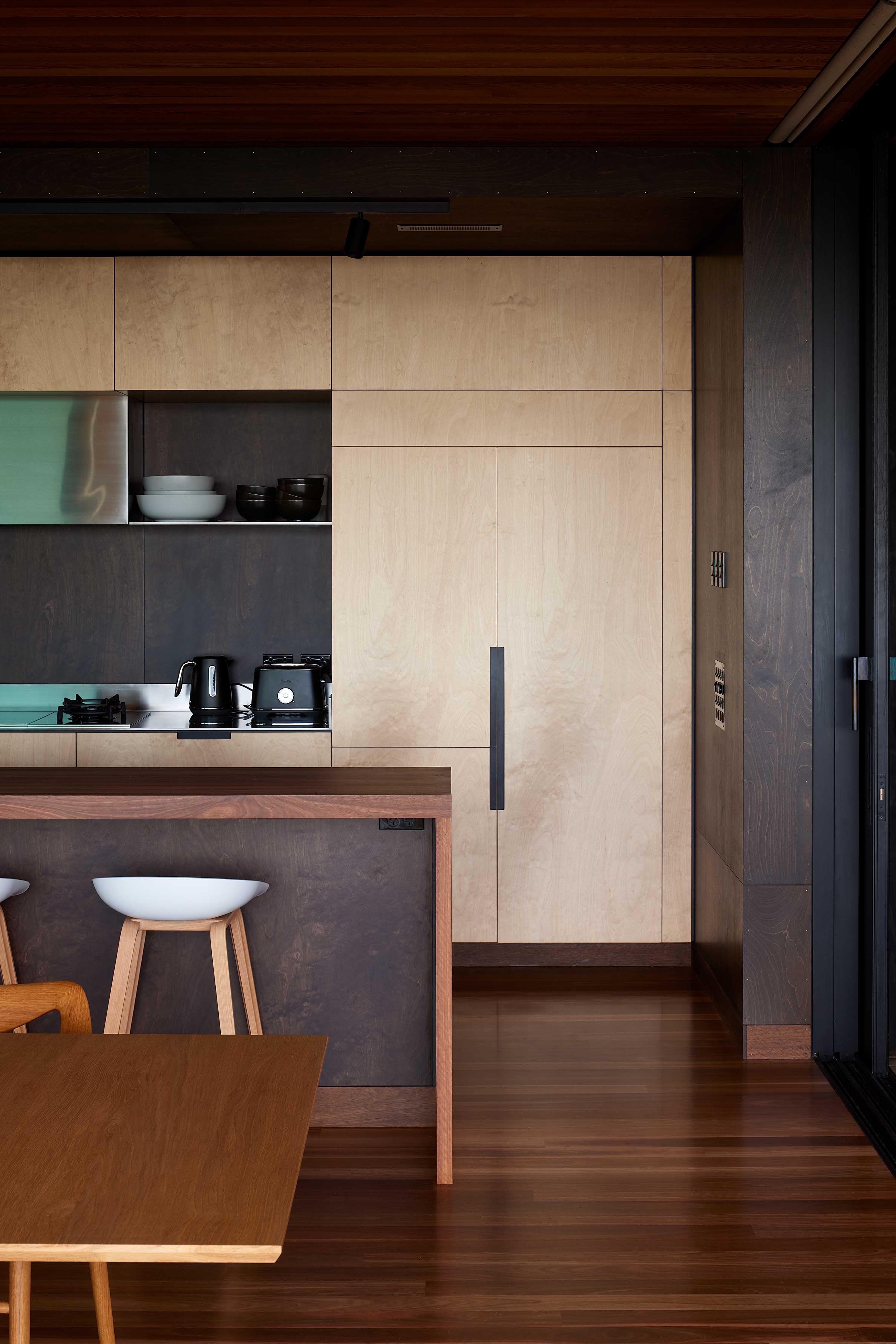 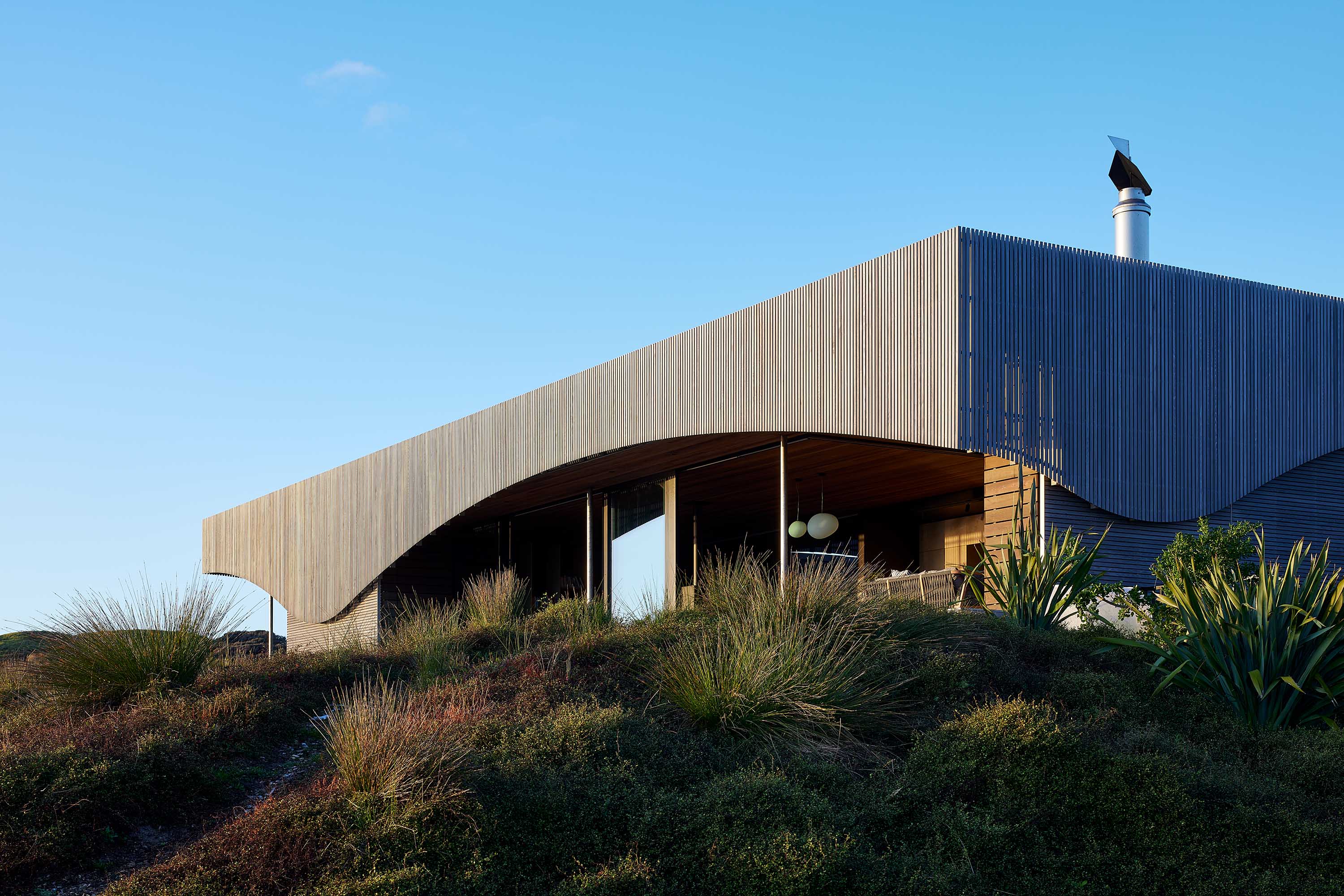 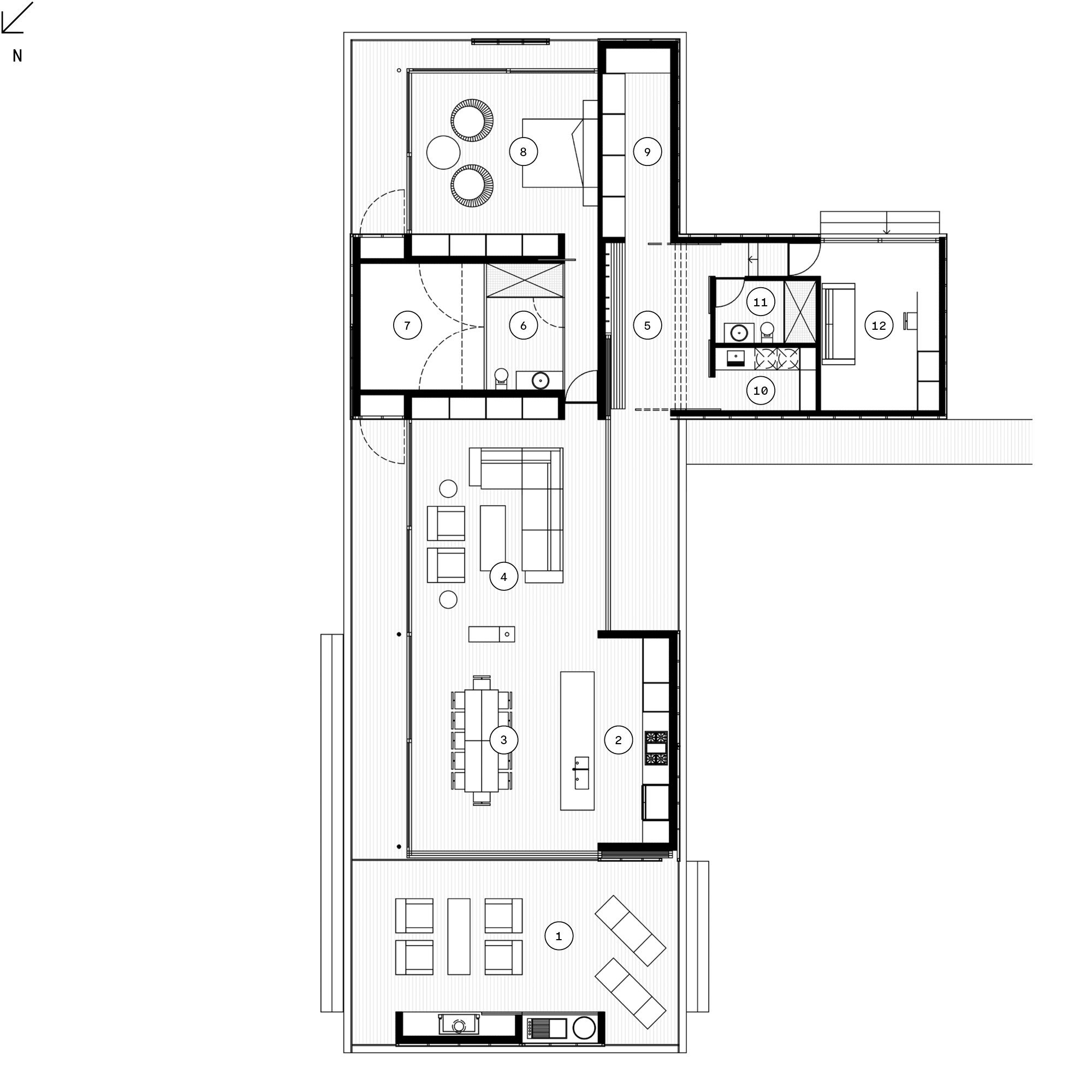 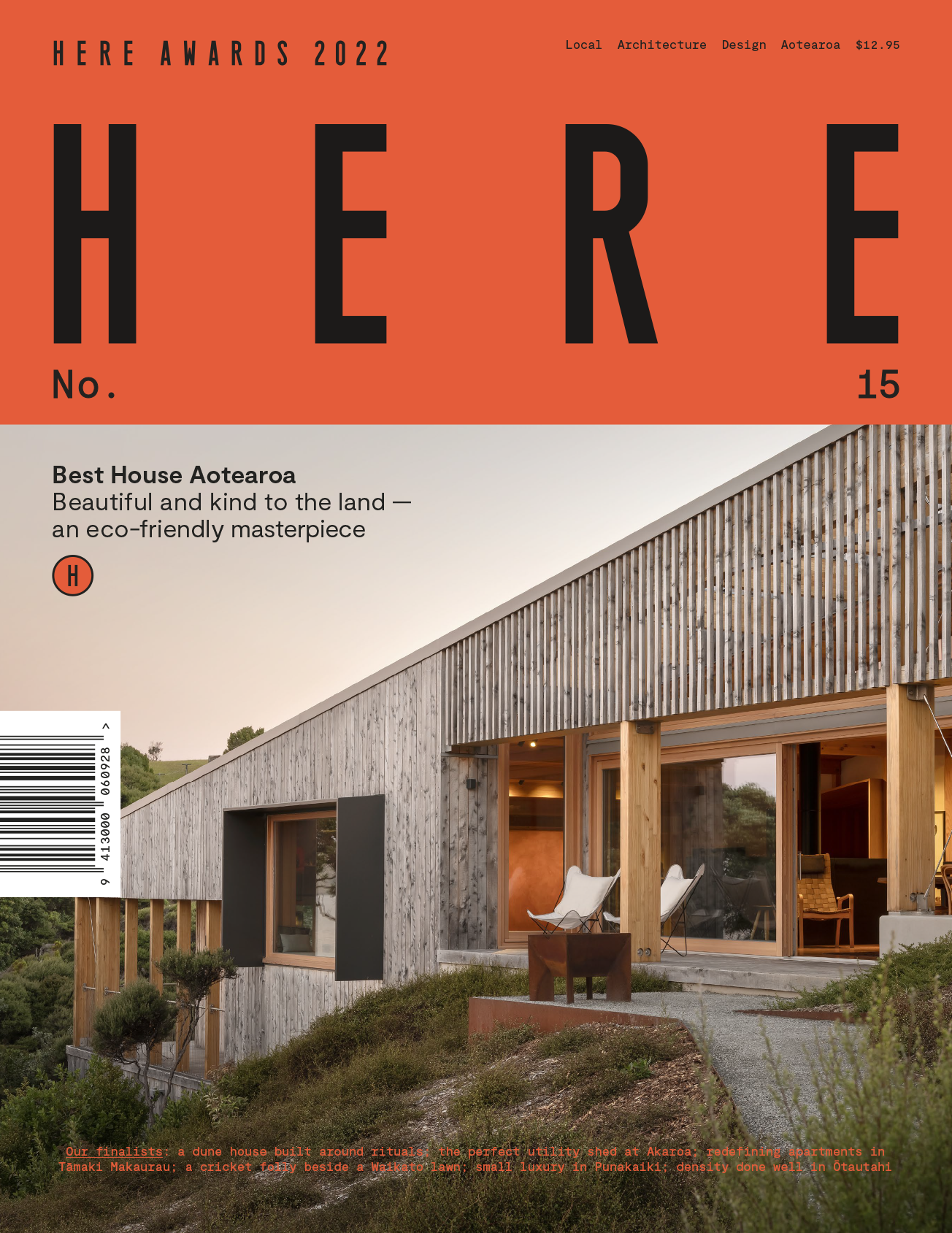