With an alternative approach and an intuitive ear, Rafe Maclean arrives at something unexpected in Wānaka.

Play it by Air 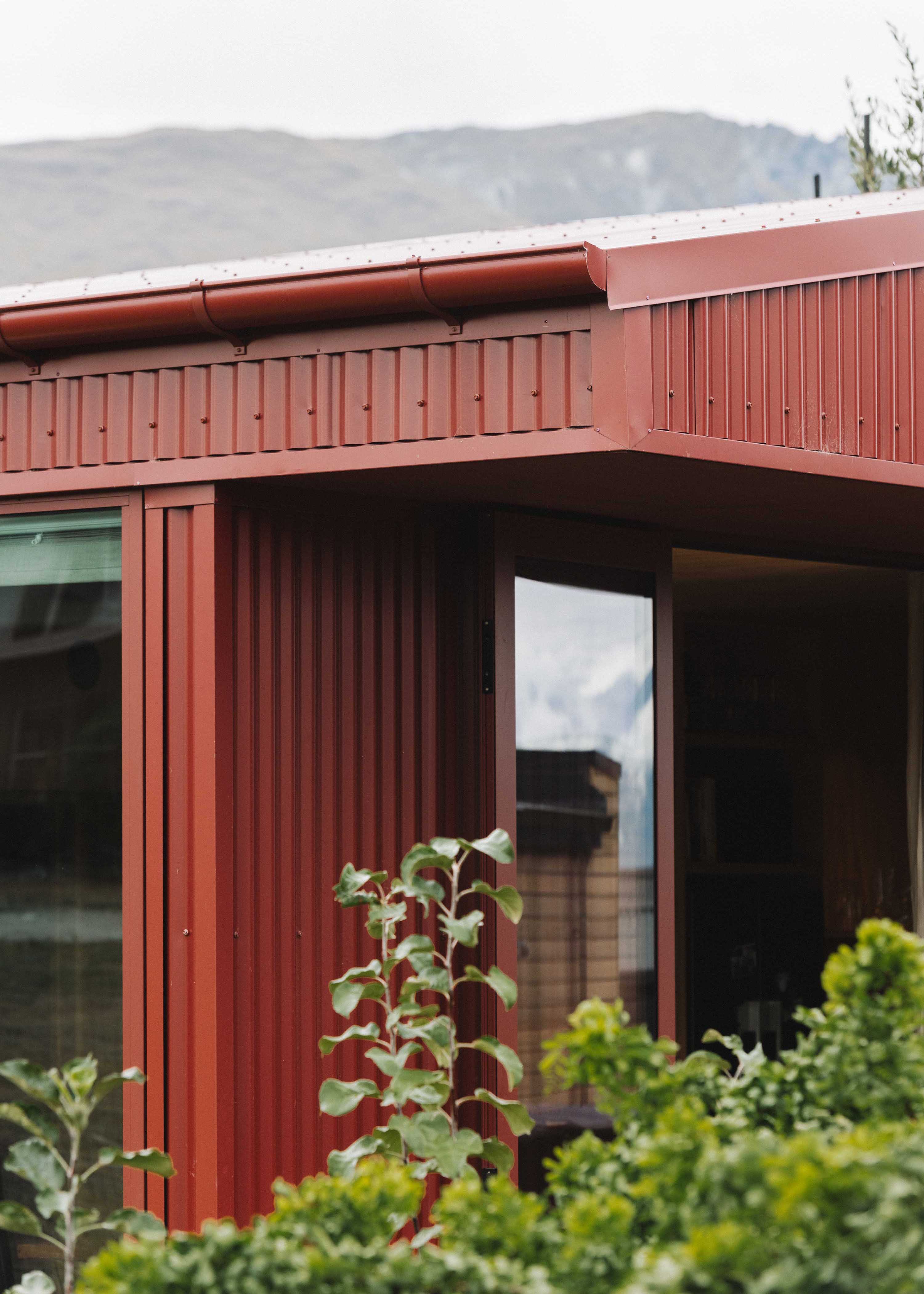 Play it by Air 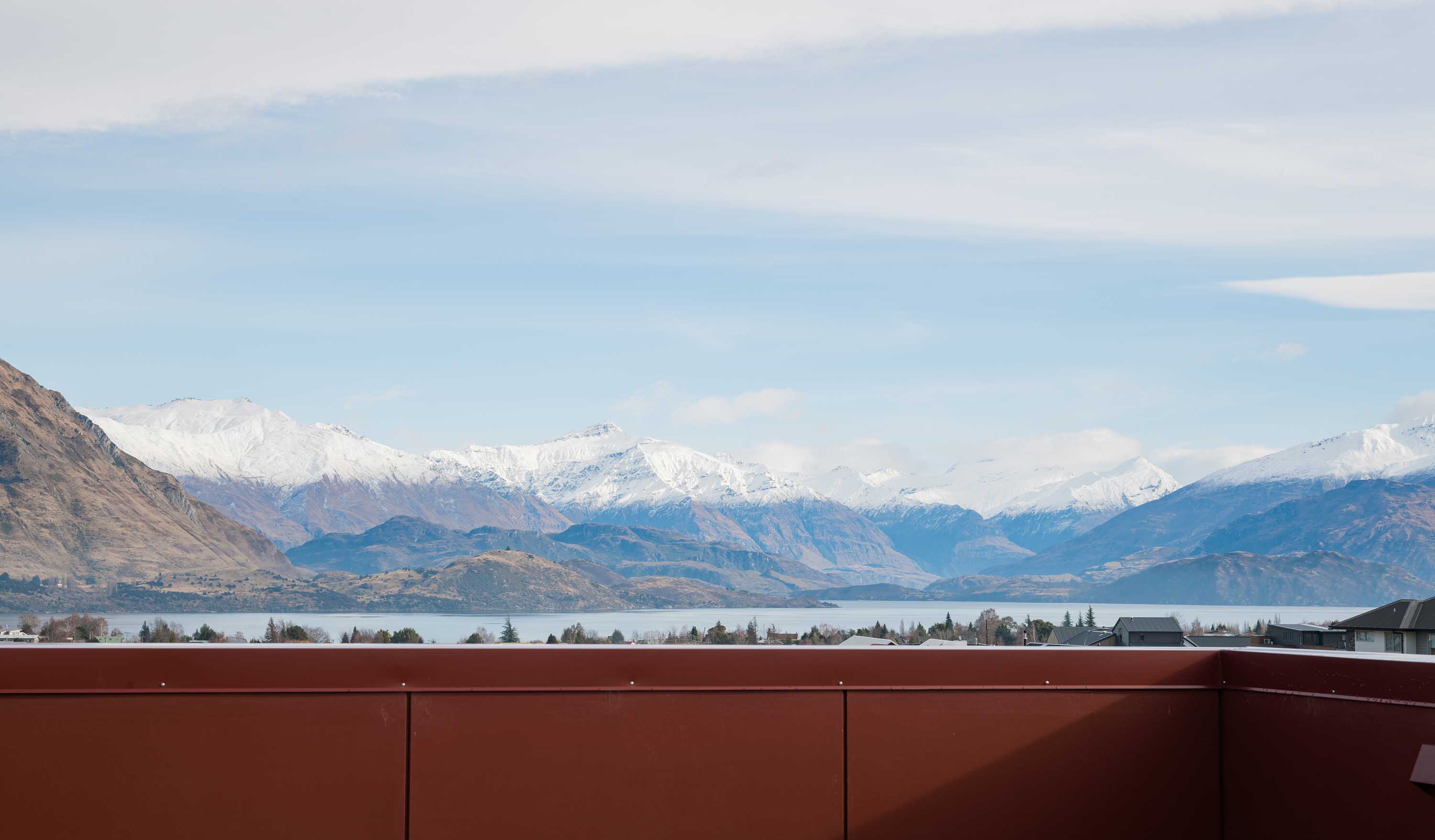 To listen to Charlotte Ryan's Spotify playlist inspired by this house, click here. It’s a beautiful day in November and the quintessential sounds of Wānaka echo around the town: nail guns, electric saws and drills, heavy machinery, and tradies’ utes. The materials and colours of Wānaka can be found in every direction, too: dark metal, light wood, grey weatherboard, white plasterboard; new homes with a similar aesthetic built on small sections – at least by Central Otago standards.

But in one of these new residential developments, there’s something a bit different tucked down a driveway; a house that stands out with its scoria-coloured corrugated steel cladding, its plywood interior, its energy efficiency and, the crowning glory, its sunken rooftop deck.

Mickey Ross and Caroline Campion bought and subdivided the section with friends whose parents now live next door. Ross and Campion liked the vibe of the houses that local architect Rafe Maclean had designed, so they enlisted him to create a small, energy-efficient home for them.

Creativity loves constraints and this project had a few: it was a back section of just 450 square metres, and it was quite sunken in comparison to the surrounding sites. They set the house on piles, which allowed for a number of outdoor zones and garden areas at different levels, but they were quite small areas once the driveway access and room layout were sorted. Discussing how they could create more outdoor space, Campion mentioned she was a fan of roof decks, largely as a result of time spent living in London, and Maclean took note.

“The shape had to be really simple,” he says. “Sometimes roof decks are quite complex, so it needed to be easy to build and easy on the eye… The trickiest bit was working out the drainage, making sure that if there were any blockages we weren’t going to get any water into the house.” This was the first roof deck Maclean had integrated into a new build, but when you ascend the external stairway, reach the surprisingly large space above (44 square metres) and soak up the expansive views of the lake and surrounding mountains, you wonder why there aren’t more of them. “It’s the first thing everyone says to us: ‘Why doesn’t everyone do this?’” says Campion. One of the major reasons is that it’s more expensive than putting on a standard roof or adding a covered room on a second storey, but given their desire for more outdoor space, it was well worth the investment. “And it wasn’t crazy expensive,” says Ross.

The house also borders a reserve on one side, which offers an extended sense of space, and has led to plenty of people peering over inquisitively at the house, seeing the tops of the trees or the backs of heads on the roof deck and wondering what’s going on. “It’s the most private part of the section. Neither of us realised how hidden it would be,” says Campion. “I keep trying to sneak little bits of garden up there. In time, we’d love them to provide a shade canopy.”

Because they started building after a lot of the houses around them had been completed, Maclean was able to position windows to capture the views between other homes. “I love the views that we get out of the windows,” says Campion. “The little snapshots of the mountains when you’re sitting down in the lounge, or from our bedroom.” Full-height windows also provided an unexpected upside for Ross. “You get obsessed with a lake view, but you get really cool sky views here too.”

As for the exterior colour, Ross says it was partially inspired by a couple of books featuring red houses seen in Maclean’s studio during one of their first meetings. Wrapping the same durable, affordable corrugated cladding around the building was about creating consistency and avoiding the bitsy-ness of some other new homes. “It also works well in terms of the geometry and shadows,” he says. “I don’t think it’s used enough.” 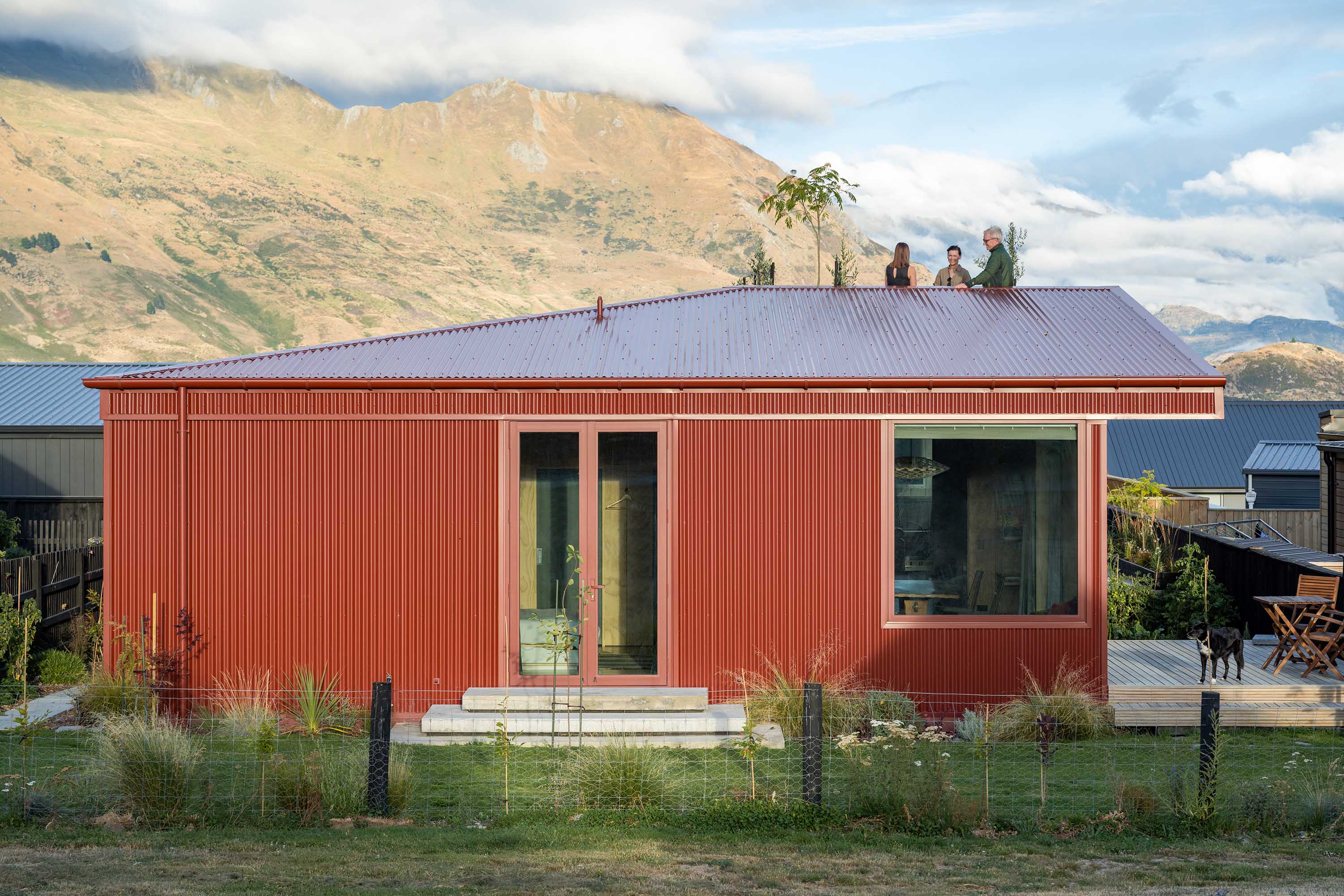 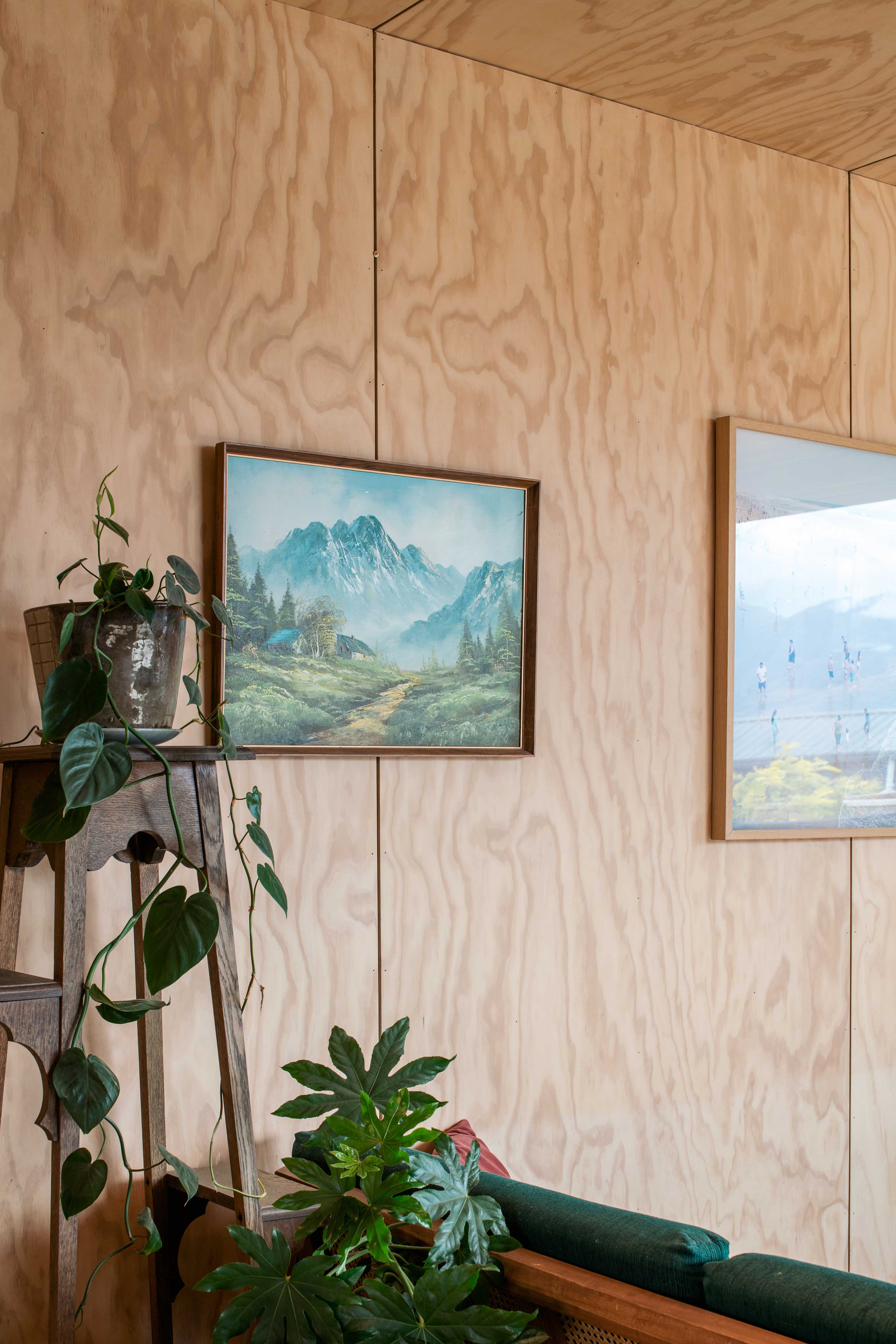 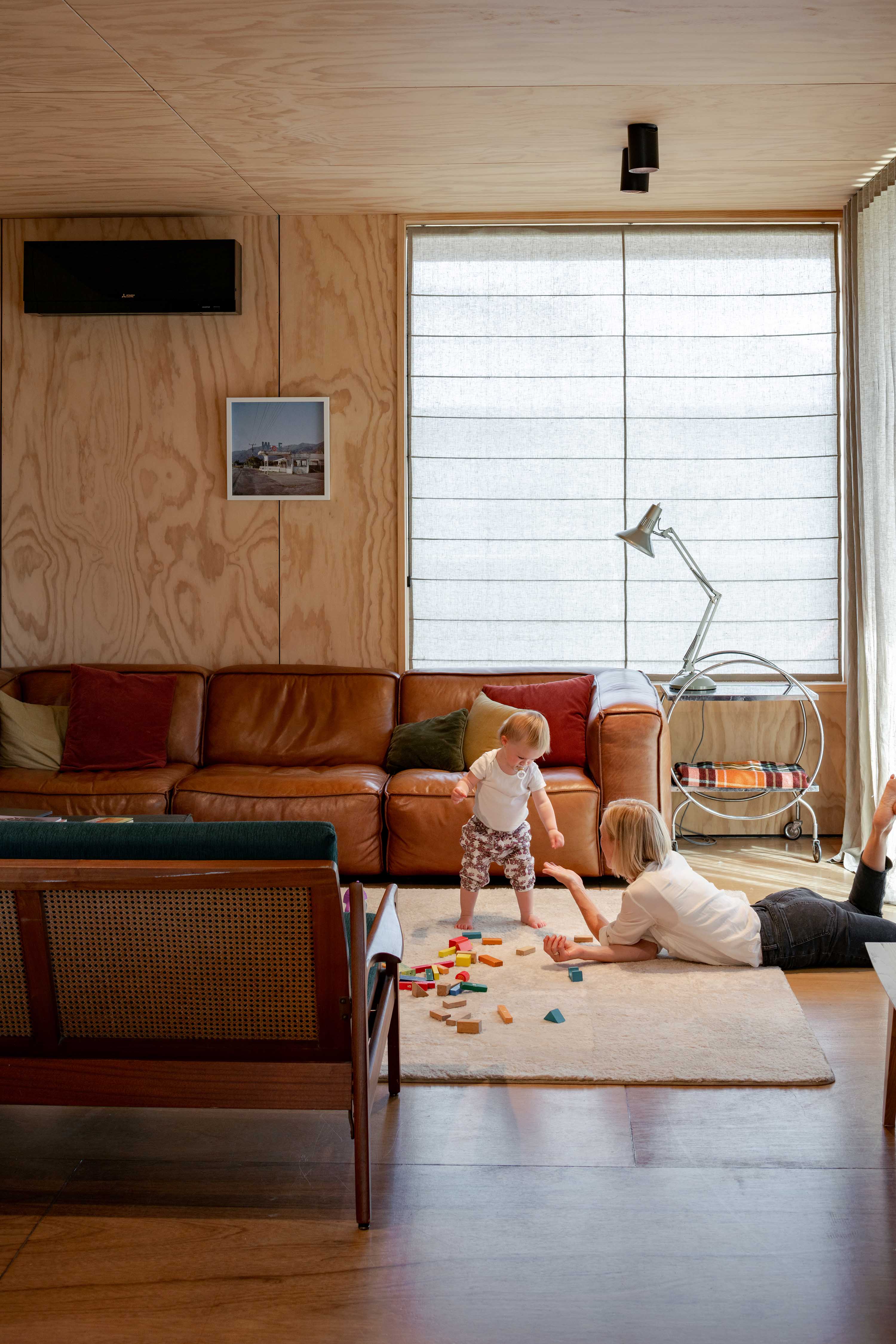 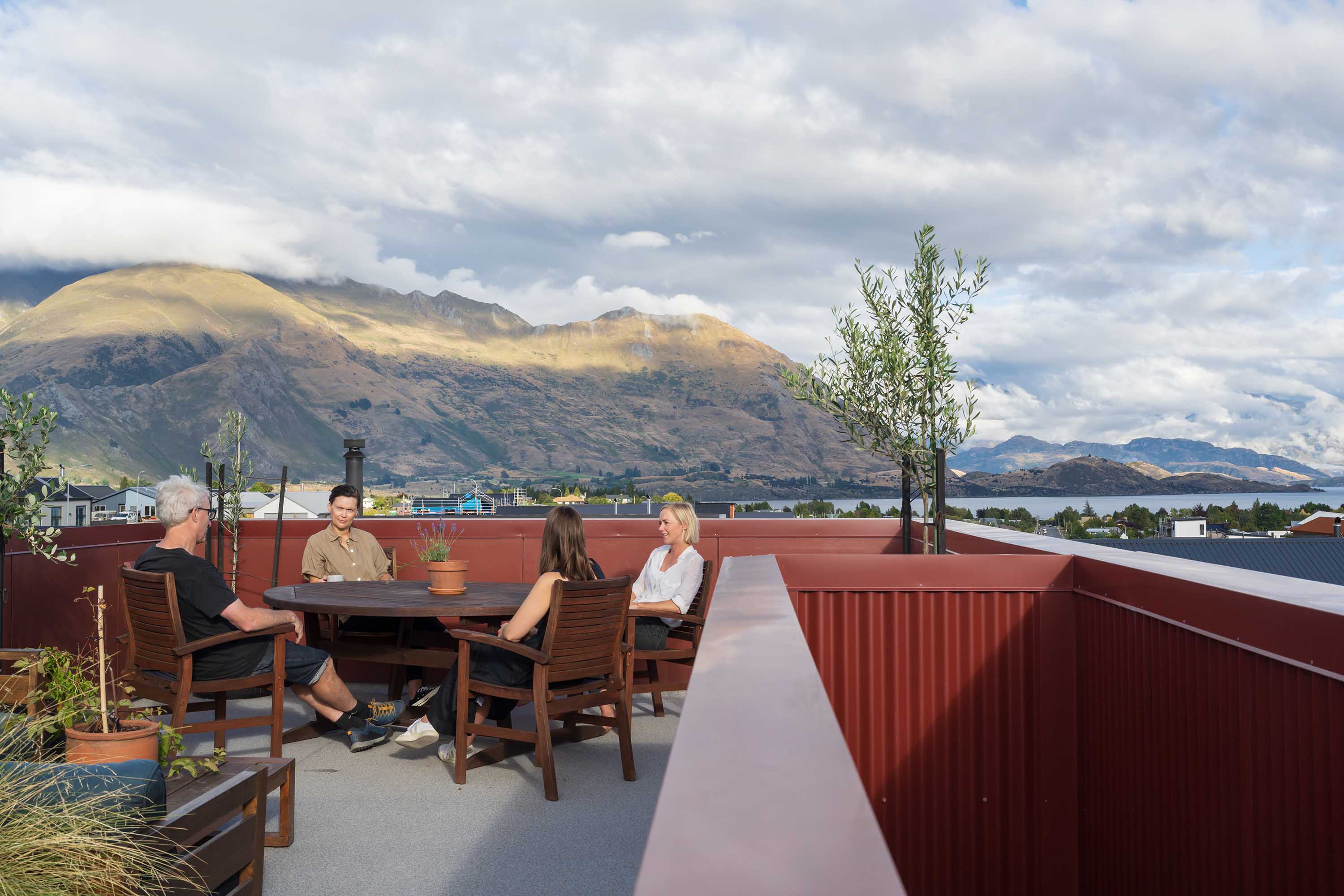 Inside, the same principles of affordability and durability apply, with pine plywood used on all the walls and floors, a stainless-steel benchtop, New Zealand-grown plantation pine door frames, an Ikea kitchen and vanities made by Ross from leftover flooring material. “In some ways, the ply is a reaction to the overuse of plasterboard and I think it gives a lot of warmth. It bounces light around and it’s natural,” says Maclean. It’s also proven extremely durable. “It just gets trashed by [our toddler] Marlow and you can’t really see it,” says Ross.

Wānaka is a town that requires toys, so there were bikes and ski gear to consider, but they are housed in an outdoor storage room designed to take some of the pressure off the 113 square-metre home. “It’s a good amount of space,” says Ross. “We can still have stuff, but it keeps your level of crap down, and I like that.”

Thanks to the small footprint, the simplicity of the design and the choice of materials, the three-bedroom, two-bathroom house took just six months for Isaac Davidson and his team to build. “The quicker you build it, the less it costs,” reasons Maclean. A certified passive-house designer, he wasn’t able to get to that standard with this project, due to budget constraints, but he did the best he could with the resources he had. “Airtightness is the next best thing,” he says, and that requires a mechanical ventilation system to replace stale air with fresh air. It also exchanges heat, reducing energy consumption.

Having a warm, dry and efficient home was important, says Ross. “I’ve lived in the States and travelled a lot for skiing, and everyone says, ‘You should be good in cold weather.’ I like being cold when I’m skiing, but you always need a warm place to go afterwards and it wasn’t always like that in New Zealand.” In this house, he says, “Sometimes you forget it’s cold outside.”

This was the pair’s first building experience and they say it’s been a very good one, but the house is completely different from what they initially thought they would end up with. “We picked up on little clues,” says Maclean. “Just listening to things, not so much the brief, but between the lines; the unsaid things and the reaction to feedback. That’s key to the end result. Taking snippets of info like ‘I quite like roof decks’ and developing them. Looking to see if one of [the client’s] reactions is different to the other, so we get a sense that an idea might need more work.”

That’s what they loved about Maclean’s involvement; he helped them develop a concept that used every inch of space – and every dollar – in the best possible way. “I think it’s better than we thought it would be,” says Ross. “It’s a very practical house, but it’s interesting at the same time.”

“We kind of hacked the section,” says Maclean. “We’ve made a waterfront section from a back section. It wasn’t supposed to be this good.” 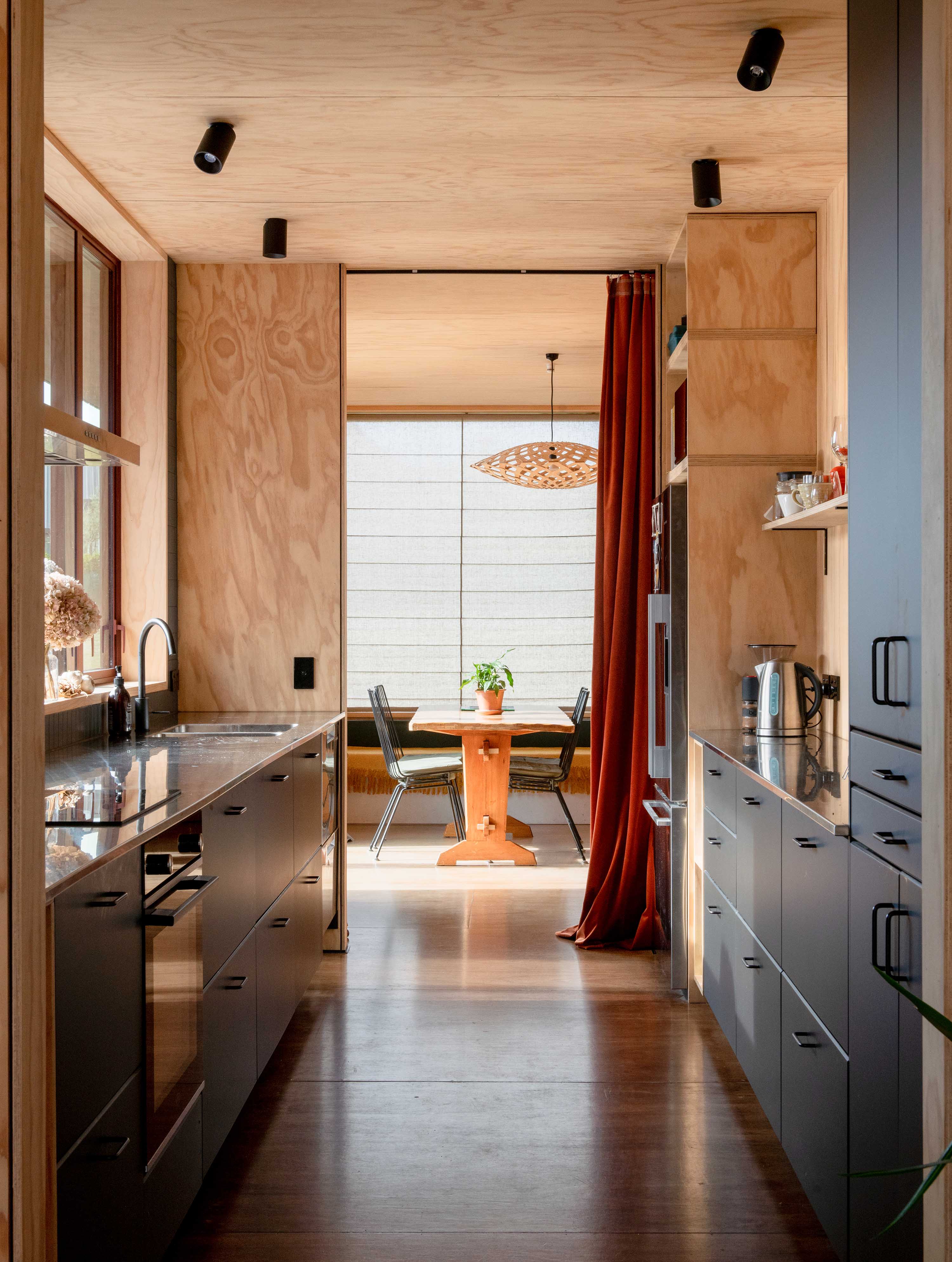 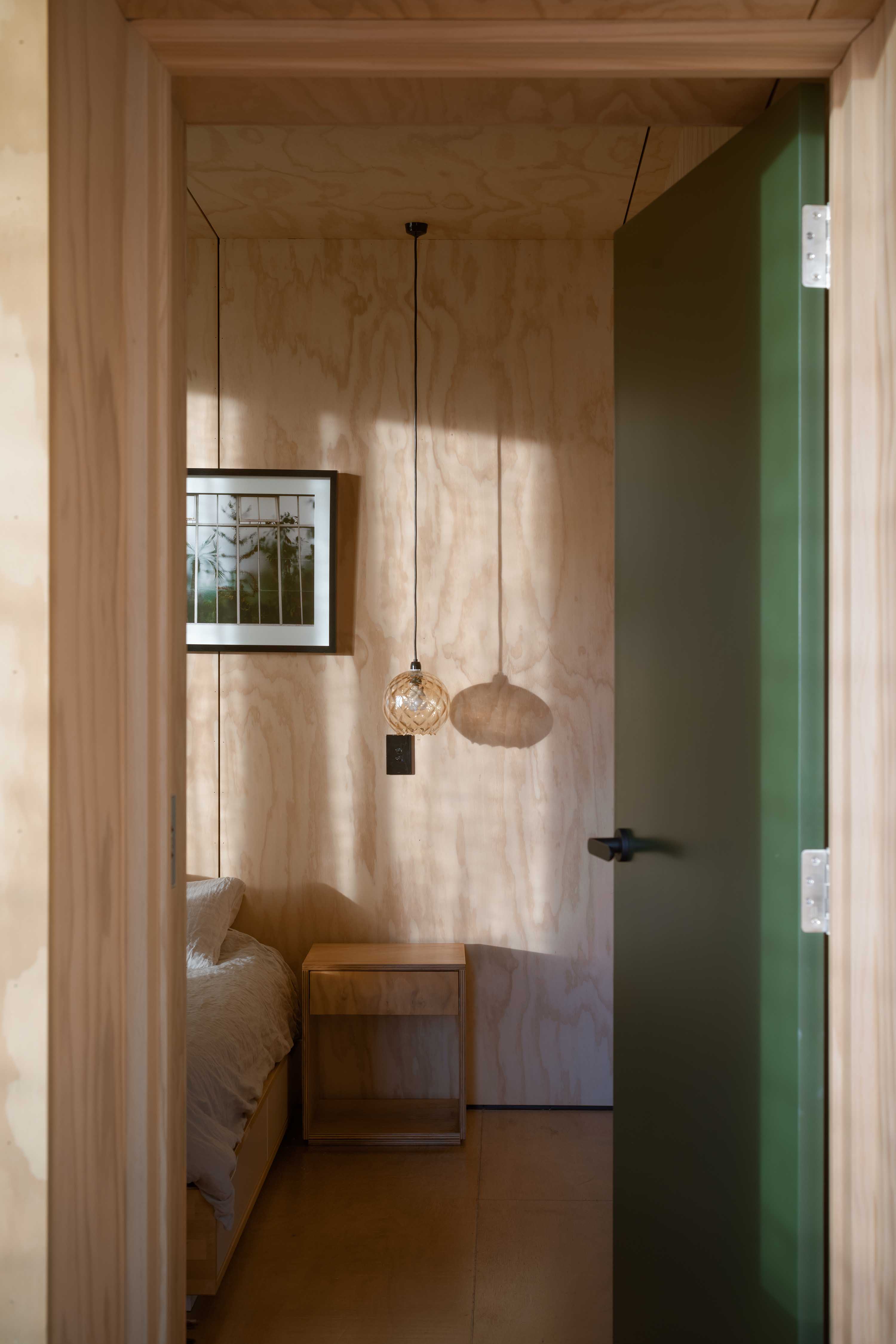 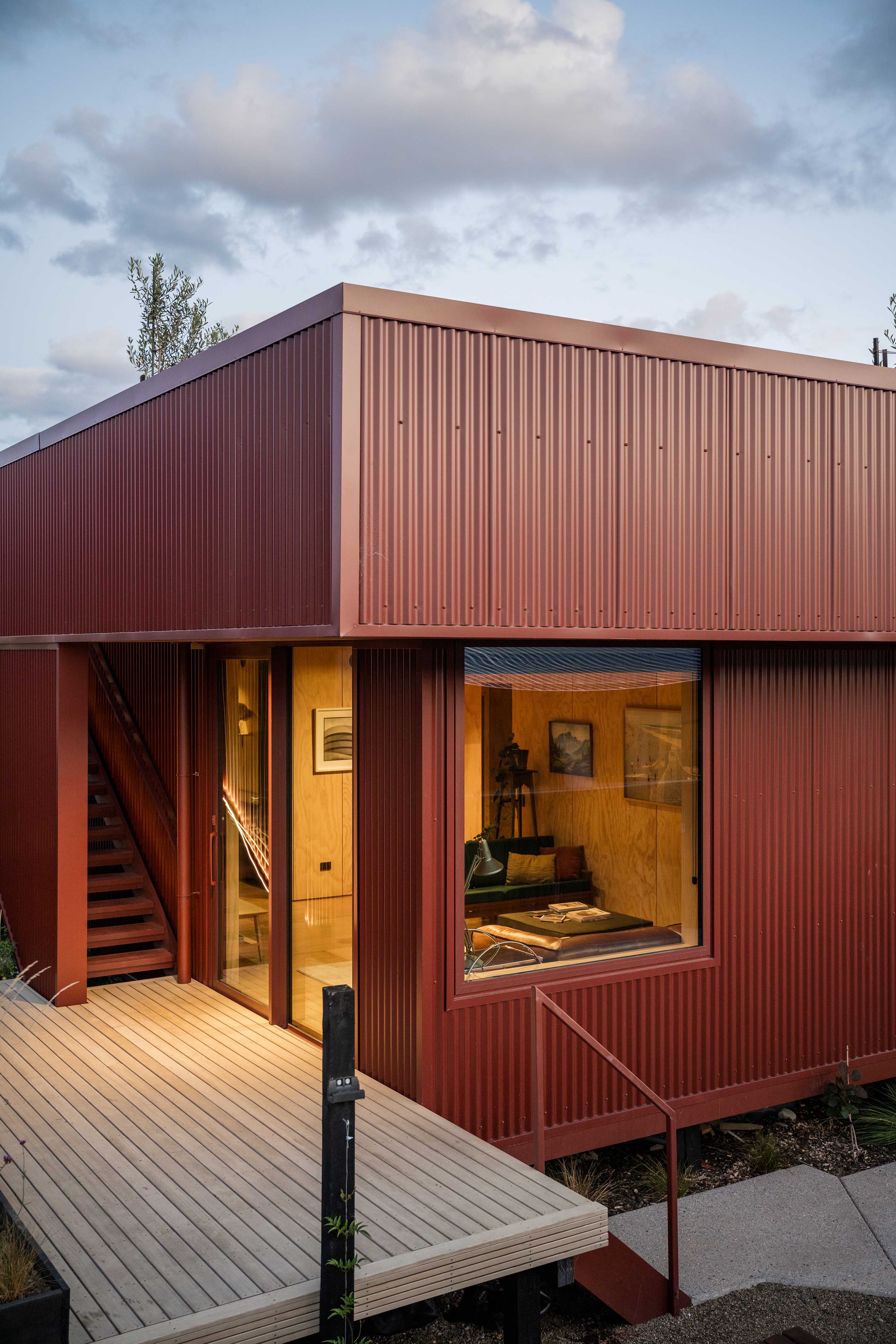 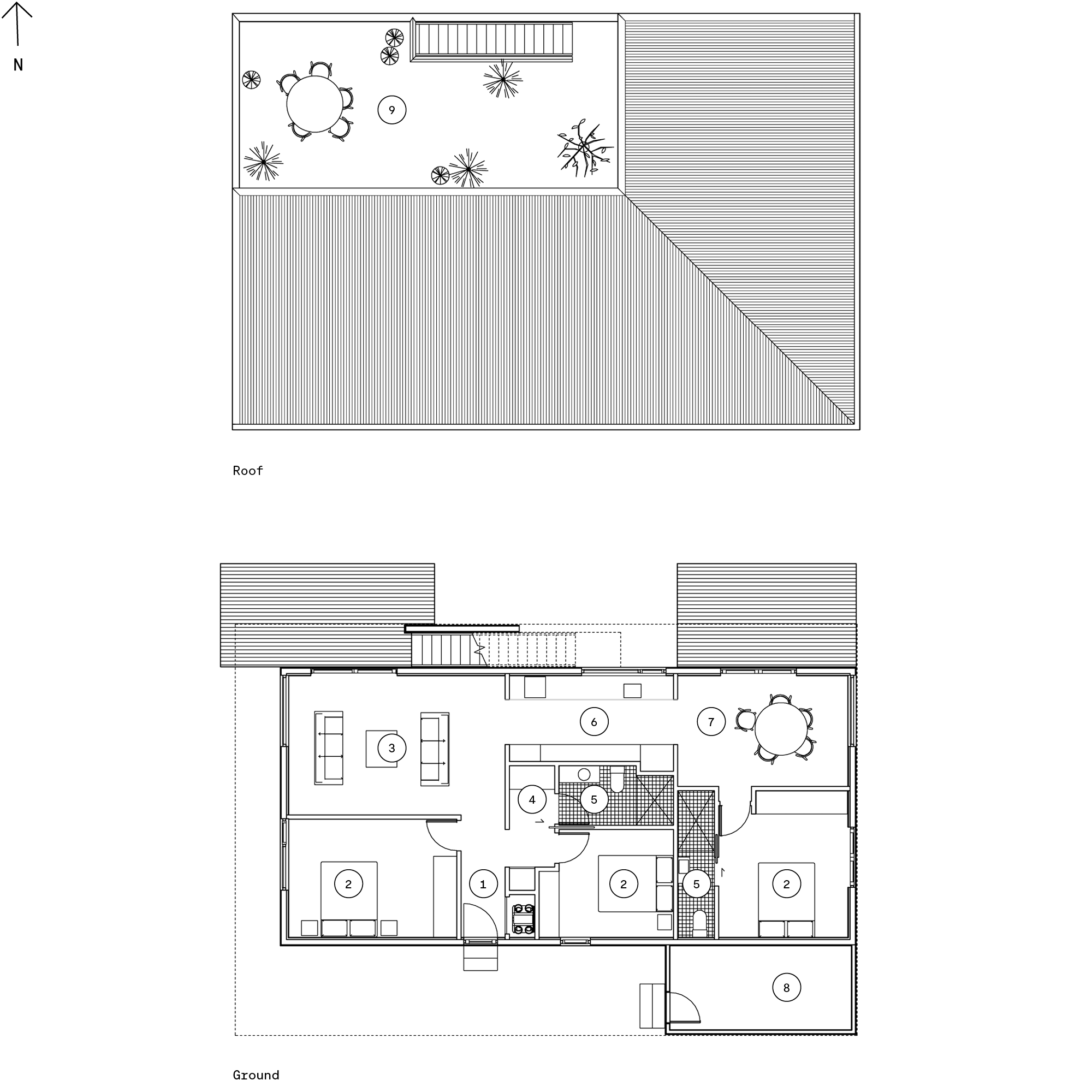