Somewhere between city home and bach, this prefabricated Waiheke Island house by Hamish Stirrat is one out of the box. 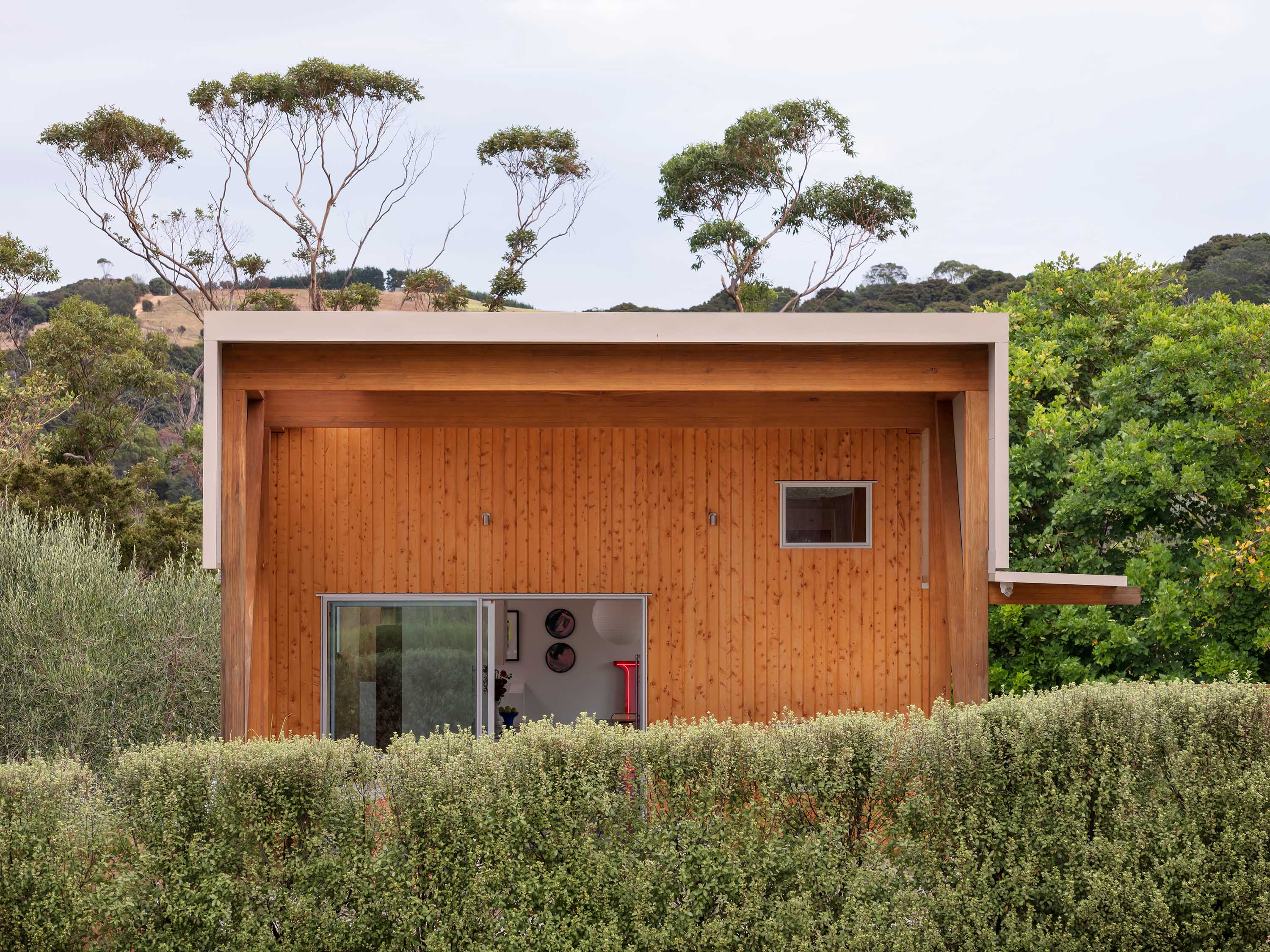 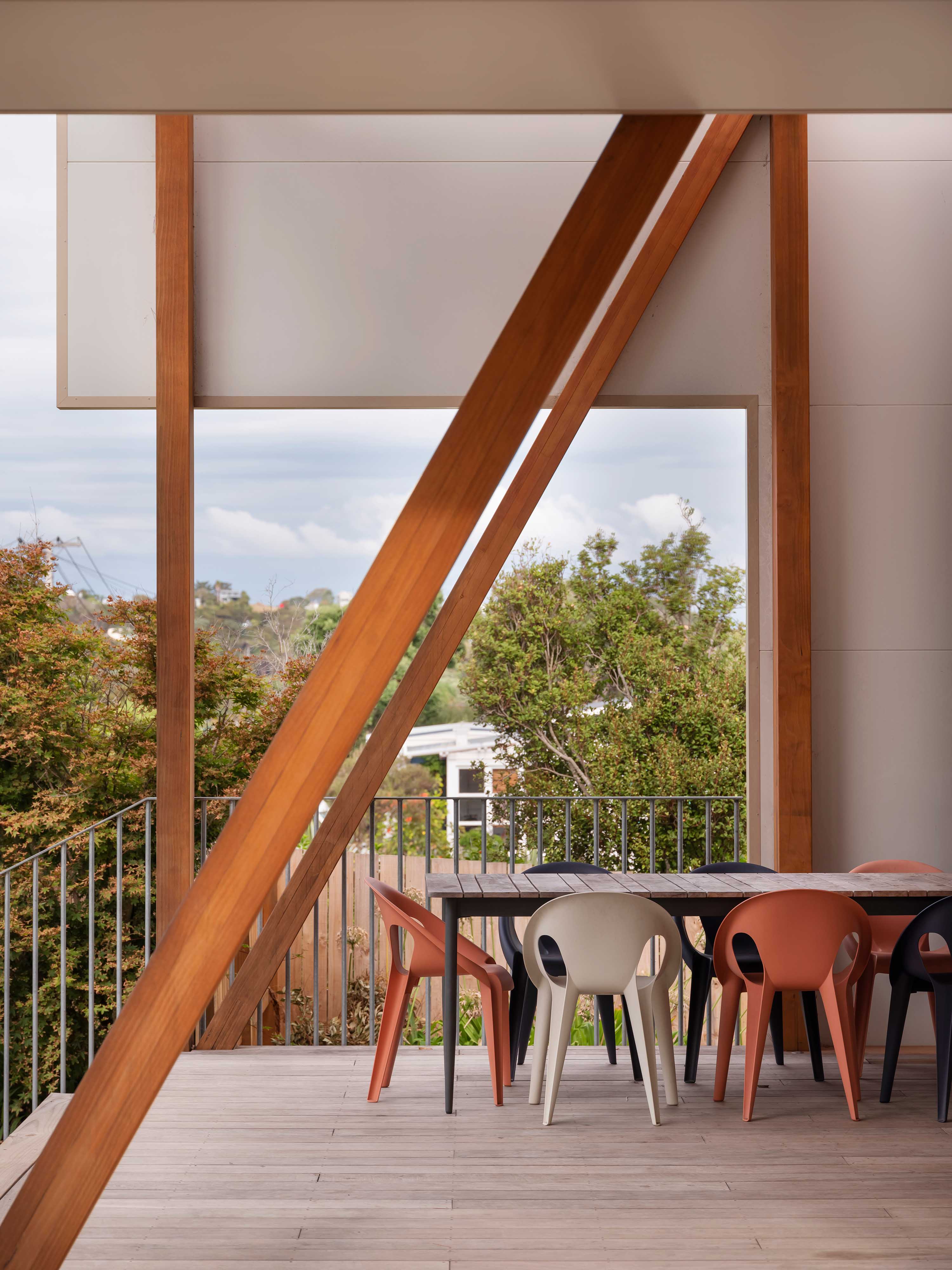 When most Aucklanders think of Waiheke Island in the Hauraki Gulf, they think of beaches and rural views, water and bush – and glamorous spreads on large bits of land. And while those things certainly exist here, there are also parts of the island that are quite suburban – smaller sections subdivided during the 20th century, often home to baches and houses that have grown ad hoc over the years so they’re not quite cottage, not quite bach.

The home of Nicola Manning and James Ruhfus sits on a quiet street like this. It’s not suburban – there are no footpaths, and Manning keeps her horse in a paddock up the road – but it’s also not country. And you’re on an island, so the beach is a two-minute drive away. To this setting, the couple have added a stalky, skeletal box, built from glulam beams and industrial cool-store panels that, somewhat oddly, feels exactly at home.

The long, narrow section has houses on both sides, with a peek of a view over the Hauraki Gulf to the south. Neighbours on this street of ramshackle cottages and former baches have nicknamed this new house “the shoebox”: from the road, all you can see above the hedge is its crisp beige cladding and timber frame. The entire ground floor is below the road in what the family jokingly call “the bunker”. “Gosh,” said my taxi driver when we pulled up outside, after she’d offered a running commentary on the charm of the baches up the road. “Now that’s a bit different.”

Manning and Ruhfus have had a bach on Waiheke for several years. After deciding to move to the island permanently, and a fruitless search for a house to live in full-time, they bought this site in 2019, planning to build something simple, perhaps even prefabricated. Not long after, they contacted designer Hamish Stirrat of Fabricate Architecture (true story: they googled “prefabricated houses” and his practice came up on the first page) seeking a house that was unaffected and crisp – most definitely not a bach. “No rattan and shutters,” as Stirrat’s collaborator, interior designer Natalie Parke puts it.

Early on, Manning mentioned her family had a store of swamp kauri on their farm, and that it might be nice to use that in the new house. Stirrat was taken with the idea, and conceived a framework of kauri beams, wrapped in prefabricated insulated panels – a product more commonly used in the construction of cool stores. “I’d been working with insulated panels for a while,” he says. “They can achieve quite sculptural forms, but what they really need is a frame to clip to.”

The site is long and narrow, sloping to the south and the view, with the sun to the north on the road side. Stirrat’s design dug down below the road, and would stretch over two levels, opening living areas to the north and the west, and placing bedrooms downstairs, but grabbing a slice of view from the southern end. It’s a simple, clear plan with a lightweight upper storey sitting on a concrete base. “I really wanted to get a tiny sliver of water view,” says Stirrat. “And once we pushed it into the site, it gave us the chance to open to the north and have a covered living area.” 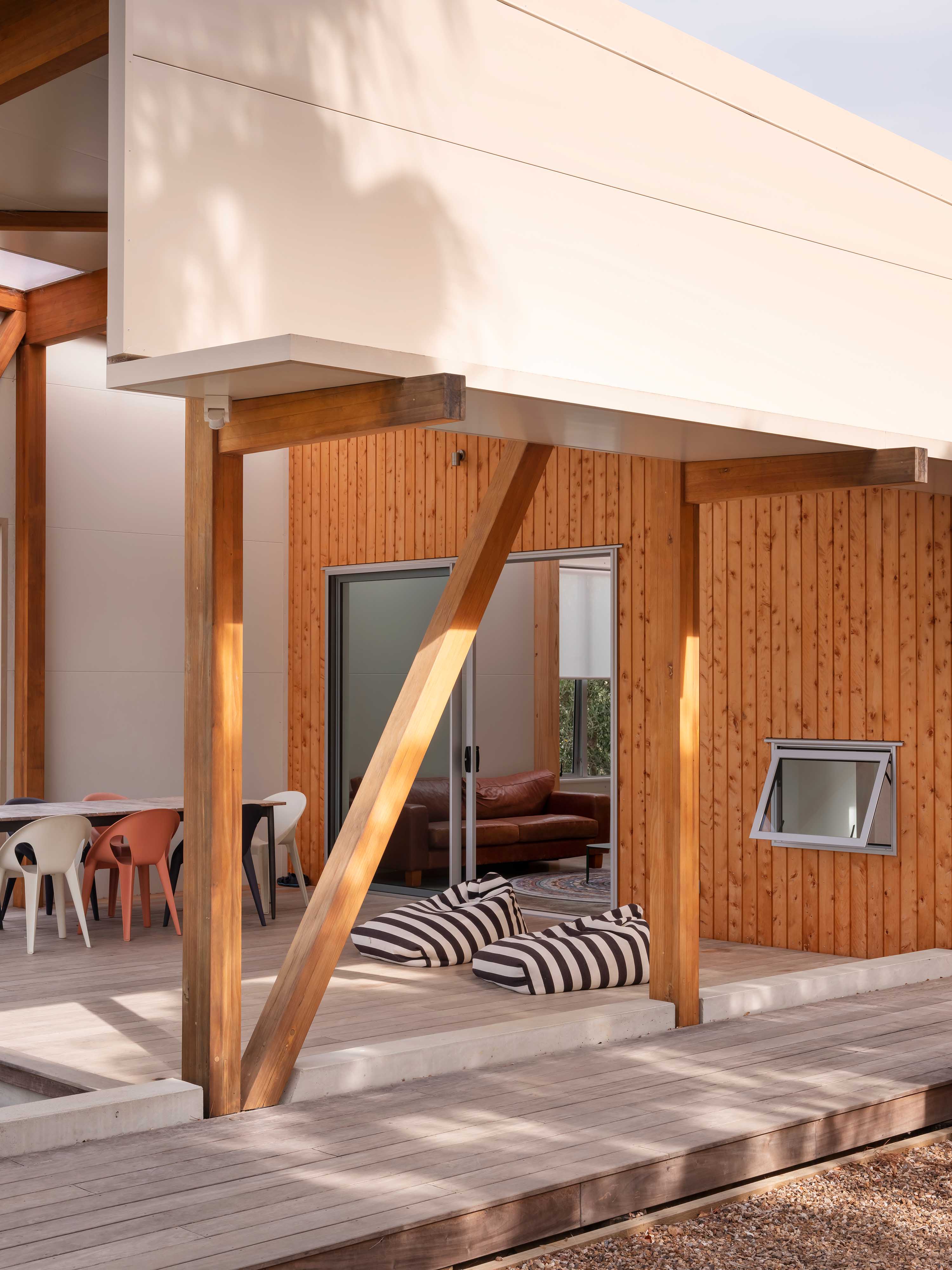 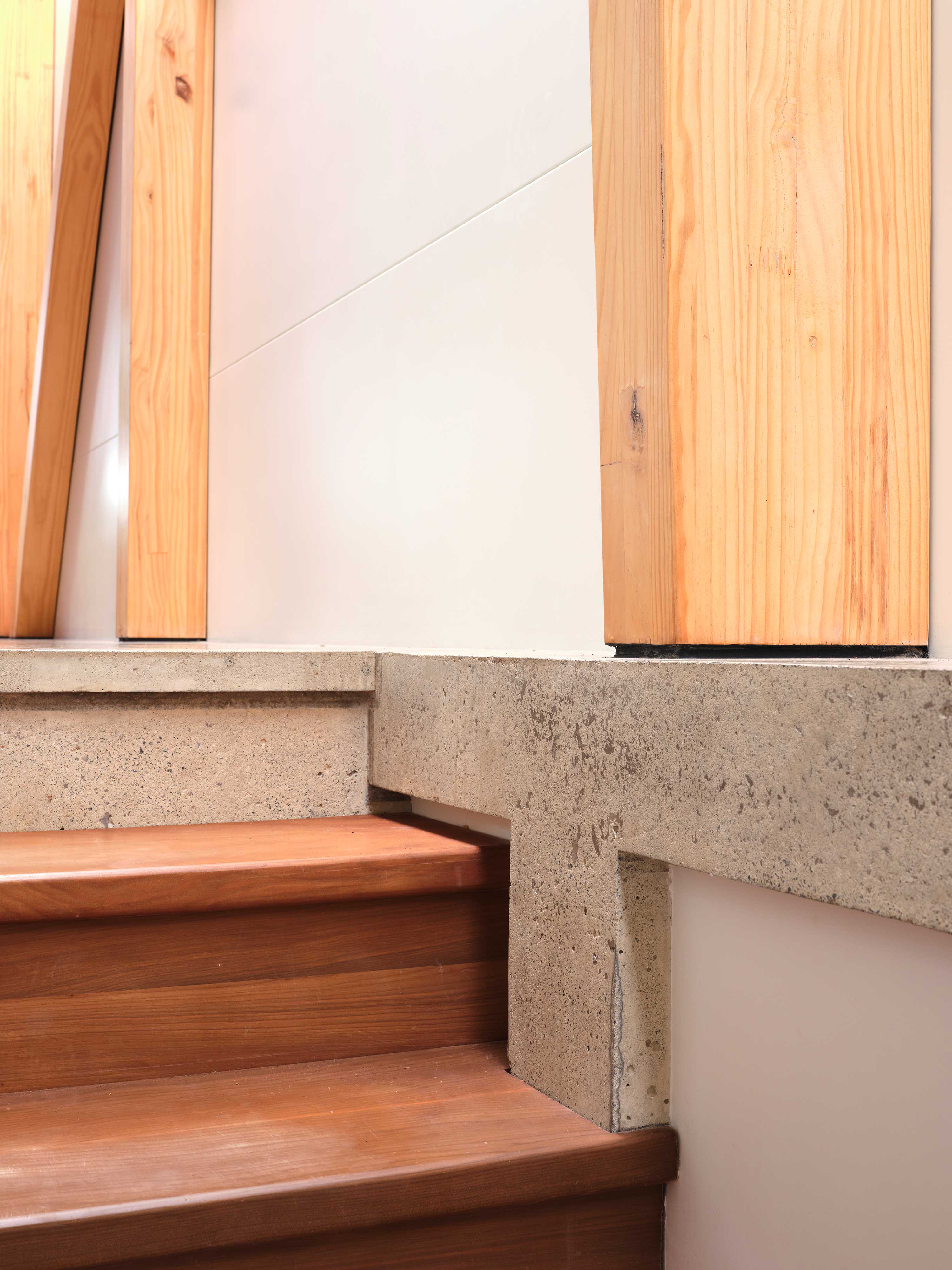 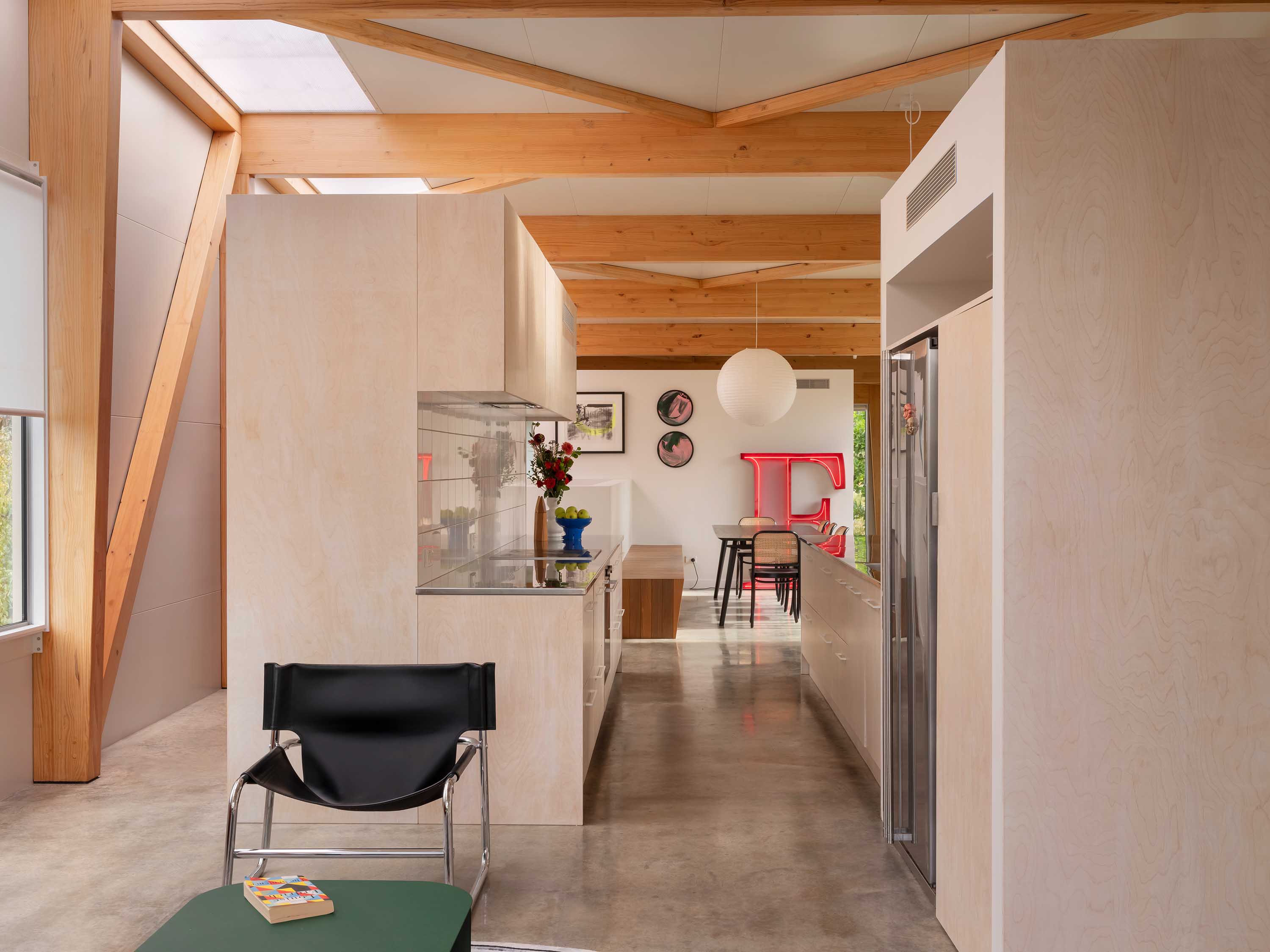 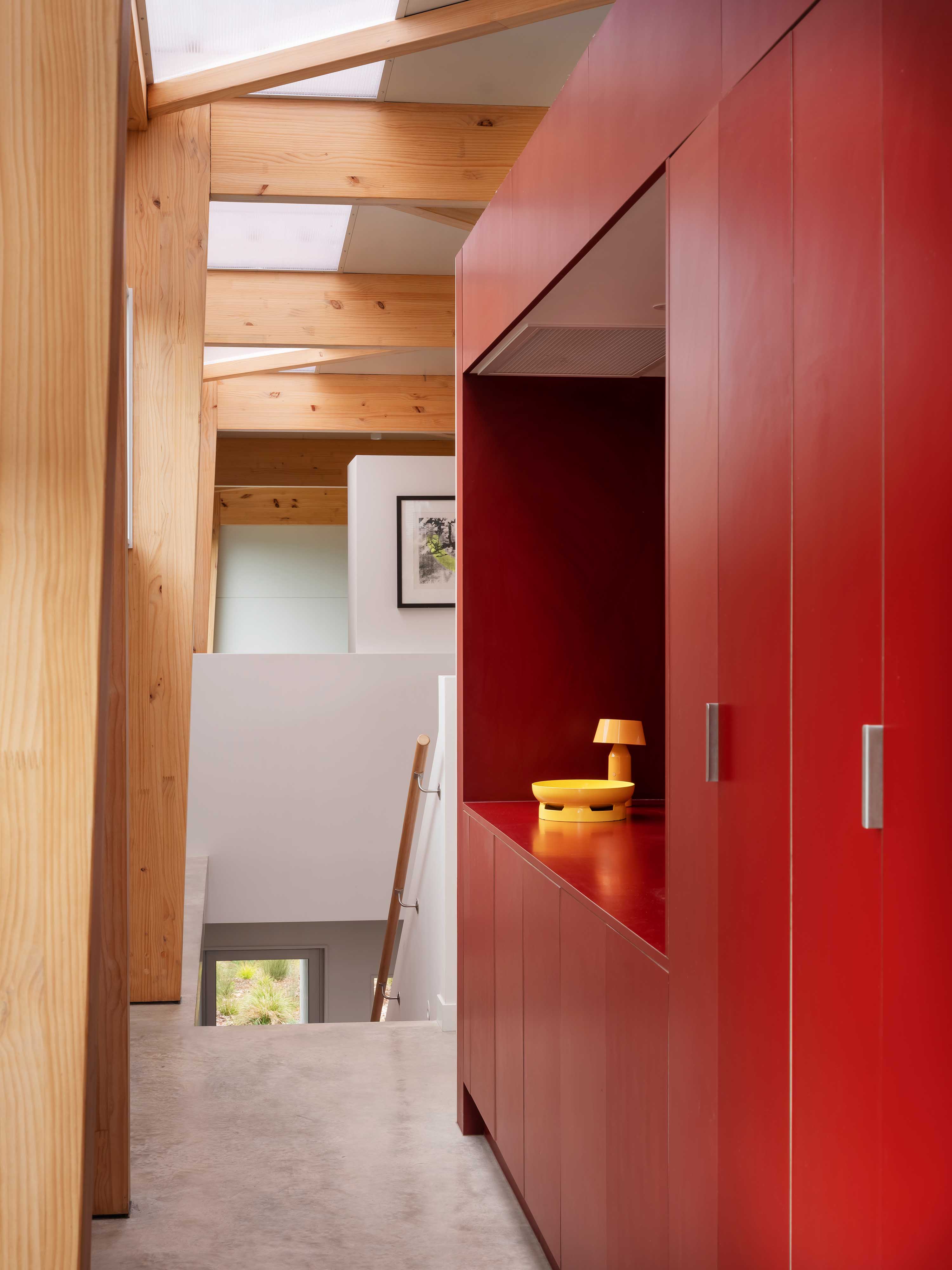 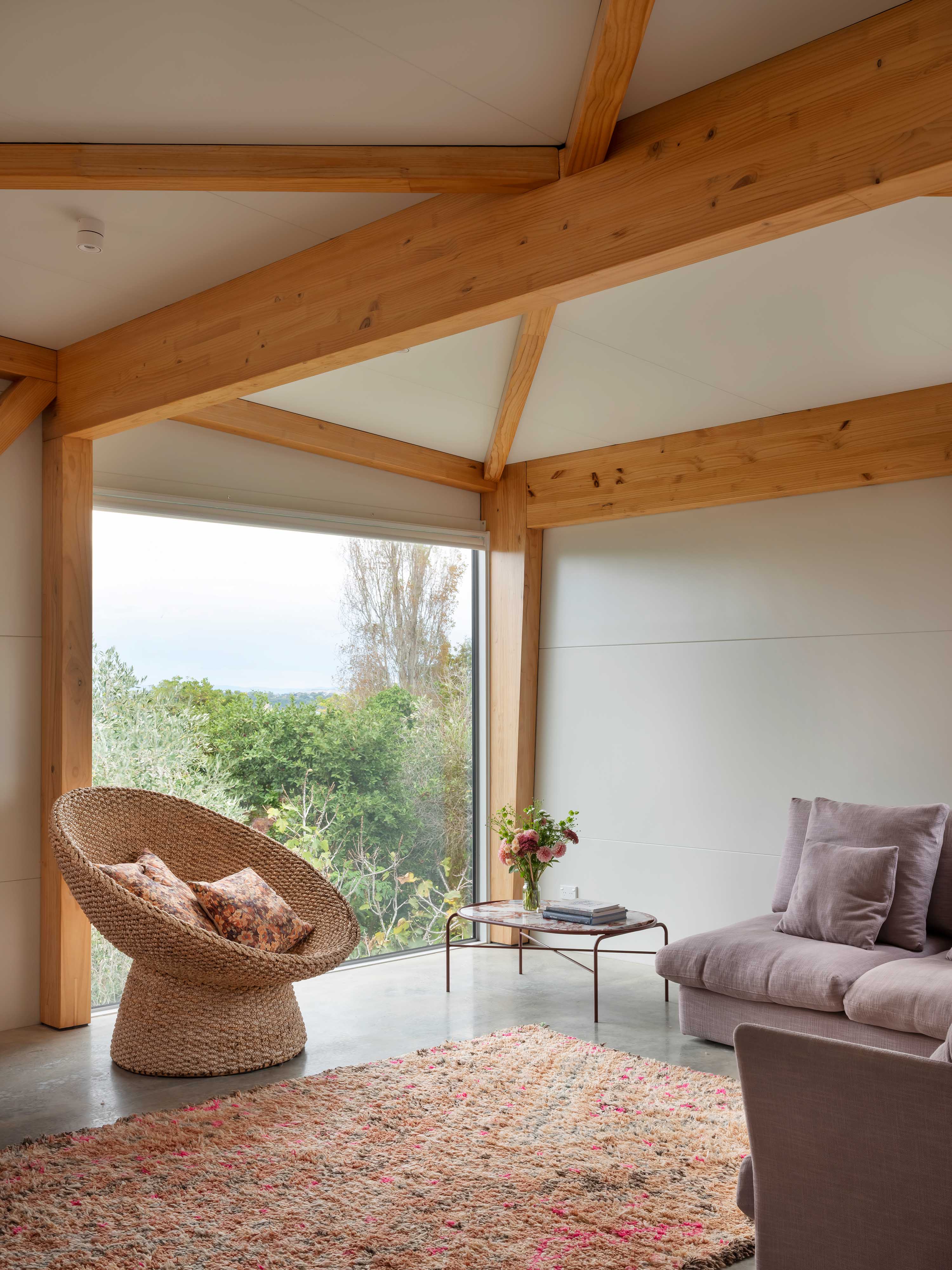 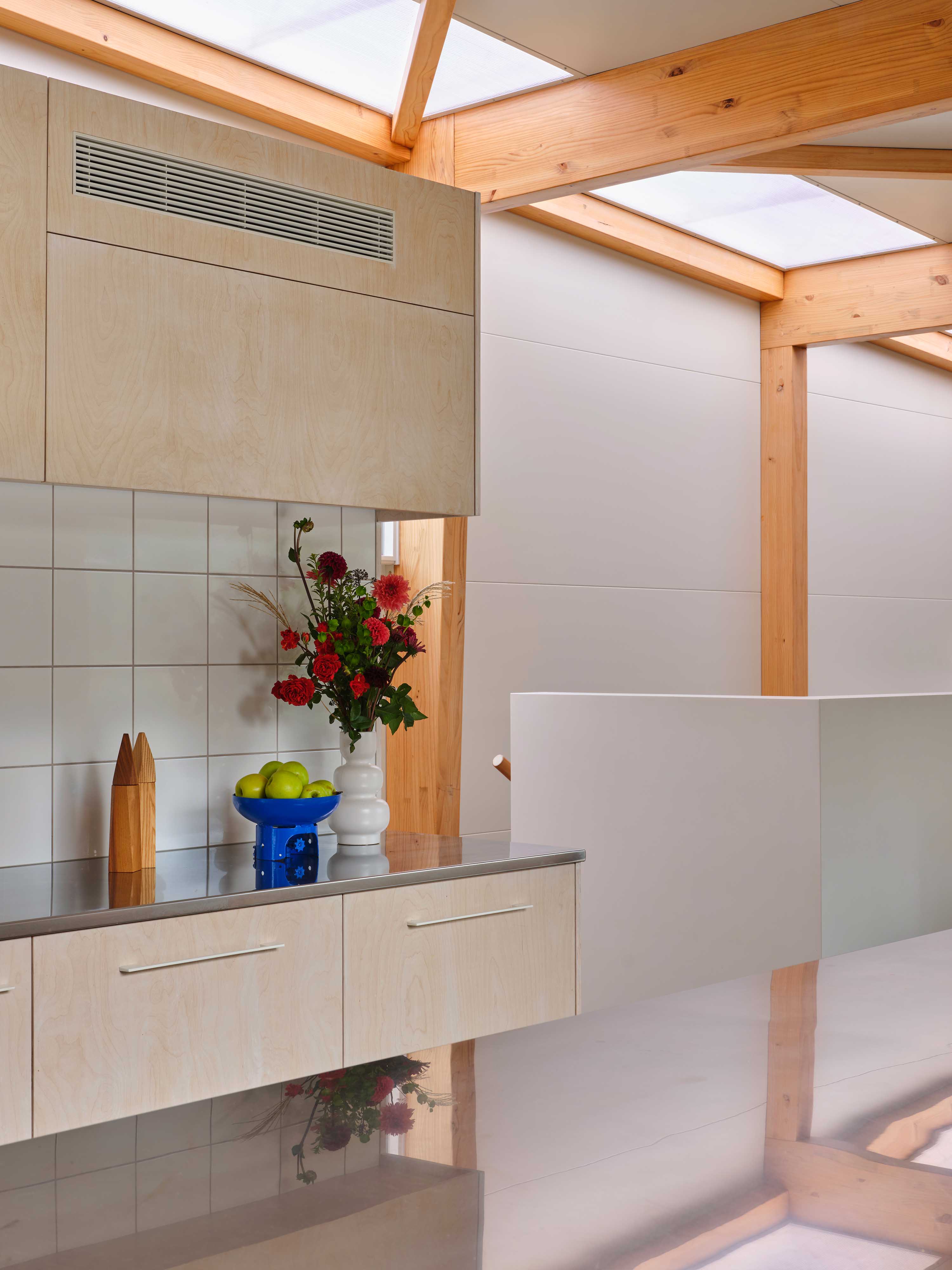 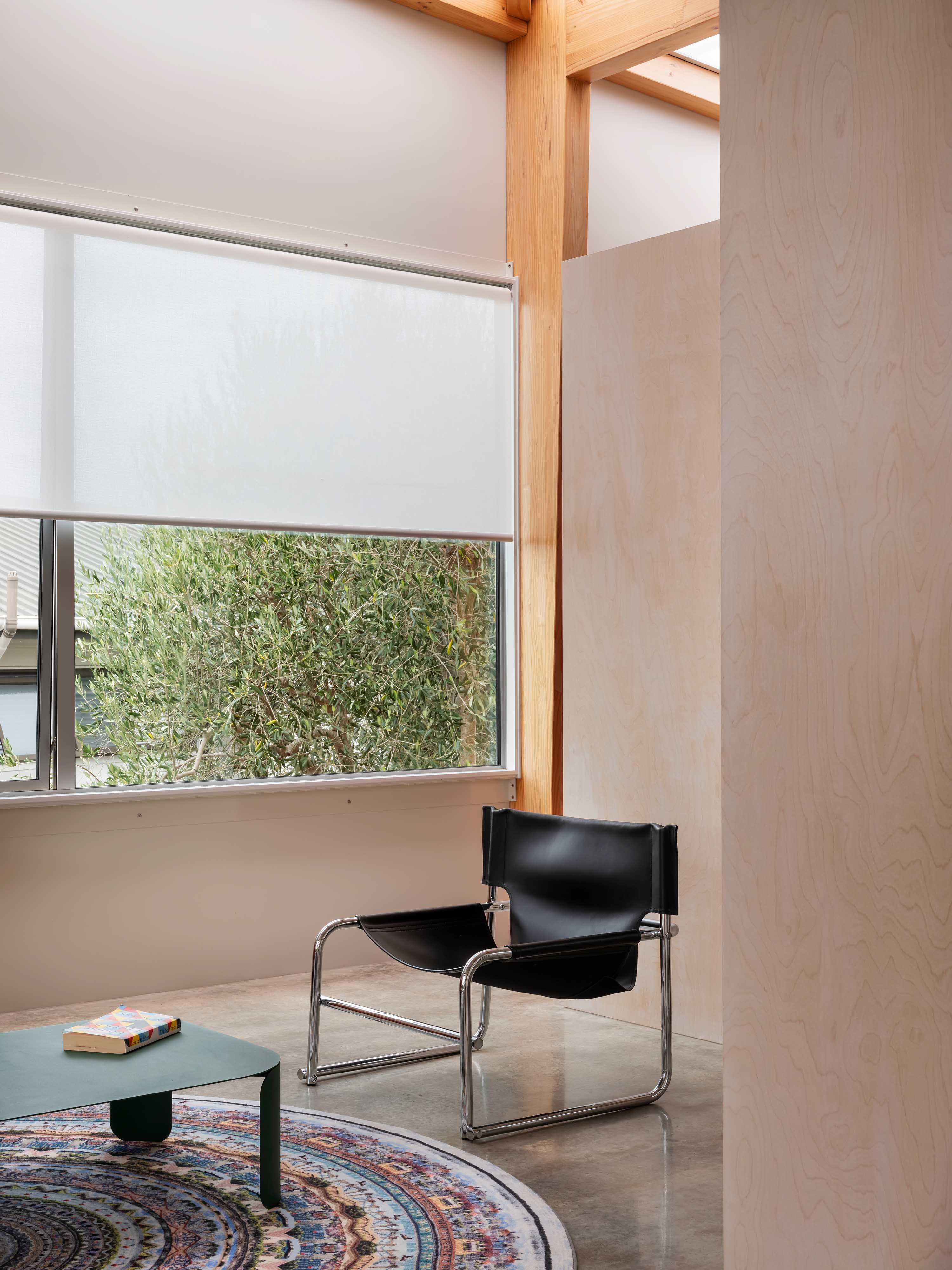 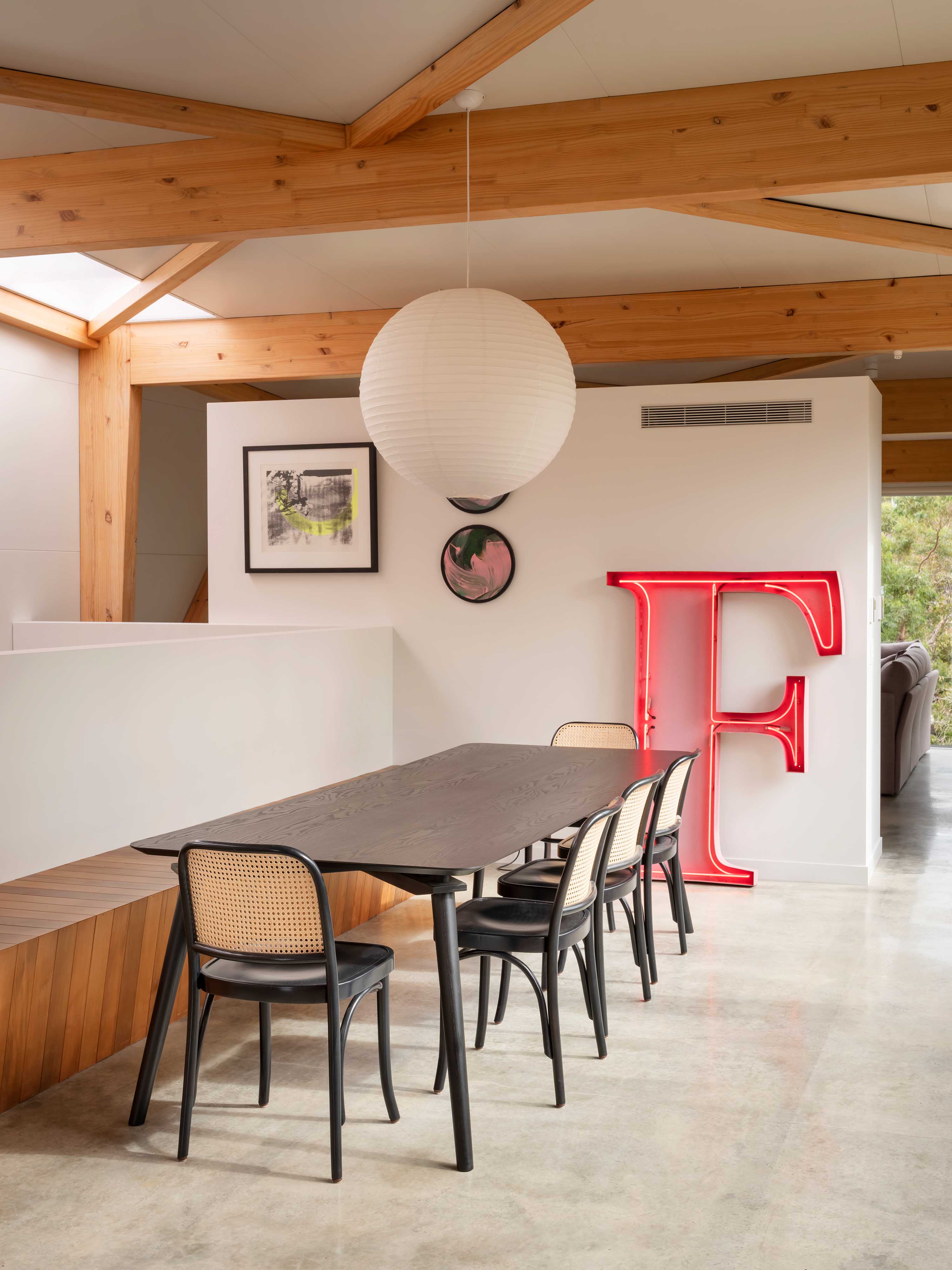 The kauri beams were abandoned reasonably quickly – turns out, Stirrat jokes, 8000-year-old swamp kauri is a bit brittle, and was best used on stairs and some built-in cabinetry. But the idea remained and eventually, he turned to a prefabricated frame of glulam beams, constructed by TimberLab Solutions. Made from radiata pine, pressed together and then formed using CNC machines the size of buses, they bring a complex geometry to the place – big, square beams interlaced with smaller pieces at angles, coming together in elegantly complex corners. Behind those sit the cool-store panels which make up the roof and the ceiling, and both the interior and exterior walls. It is a brave, reductive way of building that demanded utter precision.

They explored other ideas, including steel, but in the end Manning and Ruhfus stuck to their guns and the timber frame, which had never been attempted before in quite this way. For the couple, the idea had become a kind of mission. “It was quite emotional when we saw the model,” says Manning. “We just saw the house and said, ‘This is it!’”

Upstairs, the various functions are defined by furniture placed in the middle of the space rather than against the walls. Circulation is along the edges, with cabinetry bulkheads at regular intervals delineating kitchen, dining and a second living room tucked behind a partial wall. At the front, on the street side, there’s a deep covered verandah which is slowly becoming more private as the hedge grows. Downstairs, it’s much more contained, a concrete bunker with a tight hallway, bedrooms and bathrooms running out to a flat lawn.

The build was demanding, for reasons both technical and pandemical. The latter stopped the house mid-build for the first lockdown in Aotearoa in March 2020, just after the timber frame had gone up: builder Richard Thorpe, of Thorpe Carpentry, wrapped it in tarpaulins as tightly as he could and was forced to leave it alone for six weeks. The former came from the 1mm tolerances demanded by the prefabricated frame: there was really no room for error, thanks to the combination of wooden frame and steel panels, none of which were fabricated on site. As it happens, it all fitted perfectly.

With such an industrial approach, the finished house could have been too stripped back, too cold. “There’s quite a limited material palette – natural timber, concrete and powder-coated steel,” says Stirrat, who brought in designer Natalie Parke to add a layer of colour and warmth. “It definitely needed some punch.” Tragically, part way through the build, Manning and Ruhfus lost almost everything when a fire broke out above their storage unit. Everything from an extensive shoe collection to kids’ mementoes and furniture from their previous house was destroyed. It was devastating, but also freeing. “They wanted it to be a slick bunker,” says Parke. “They loved the concrete and they wanted something that would sit with that, but not be too cool.”

Parke’s influence can be seen in the joinery – a deep red reveal in cabinetry behind the kitchen, say – and in the bathrooms, where coloured vanities with concrete sinks come in terracotta, navy and green. Add lilac walls to the ensuite bathroom, terracotta tiles and a slight level of quirk to the furnishings, and you’ve got a house that fulfills the brief: not a bach, but an almost-urban house on an island. The place has a looseness that feels right here, 30 minutes from the country’s largest city but where you have to collect your own water and deal with your own wastewater. “That’s all Hamish,” says Parke. “He does that in-betweeny stuff that I think really resonates with people.” 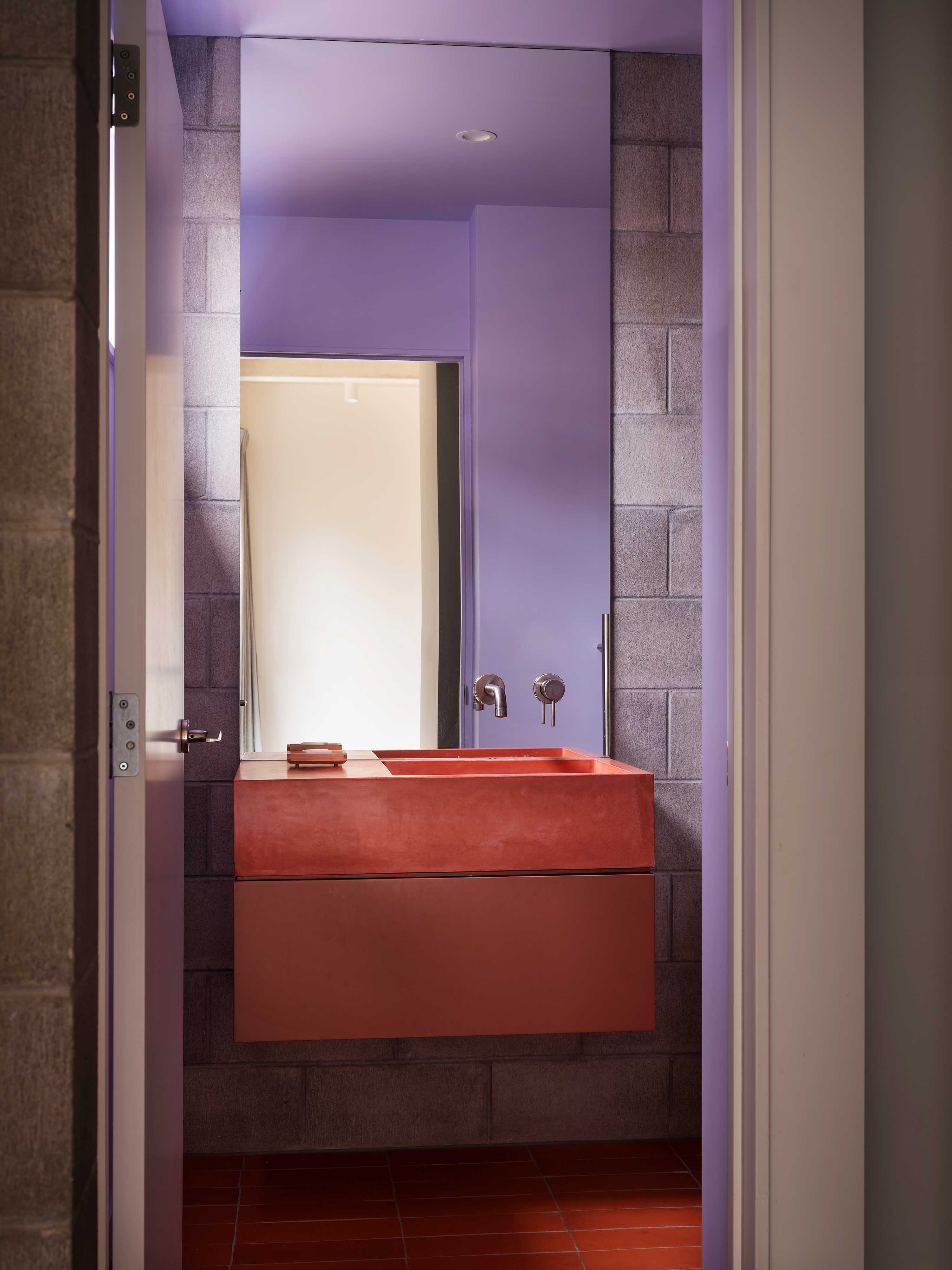 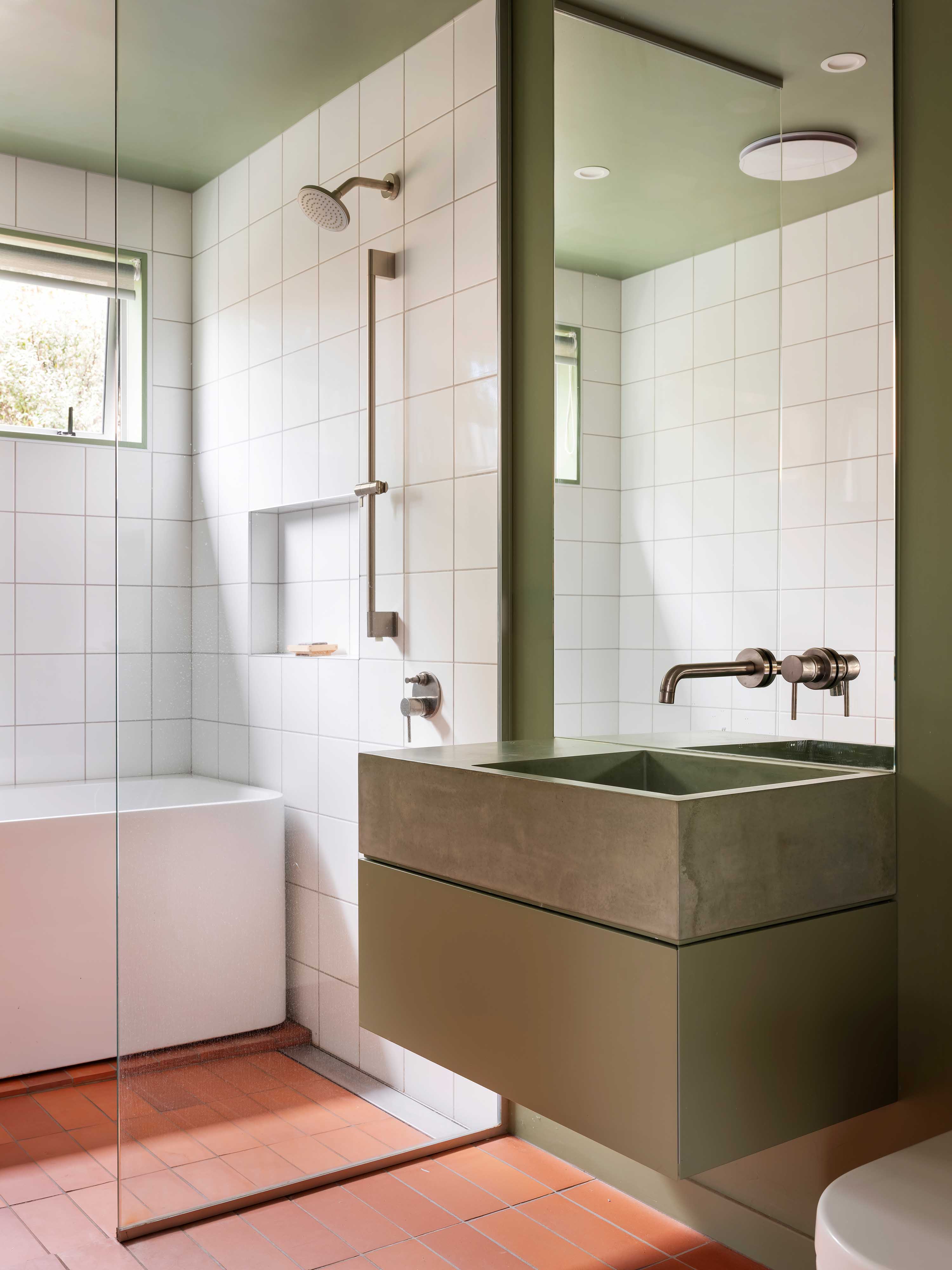 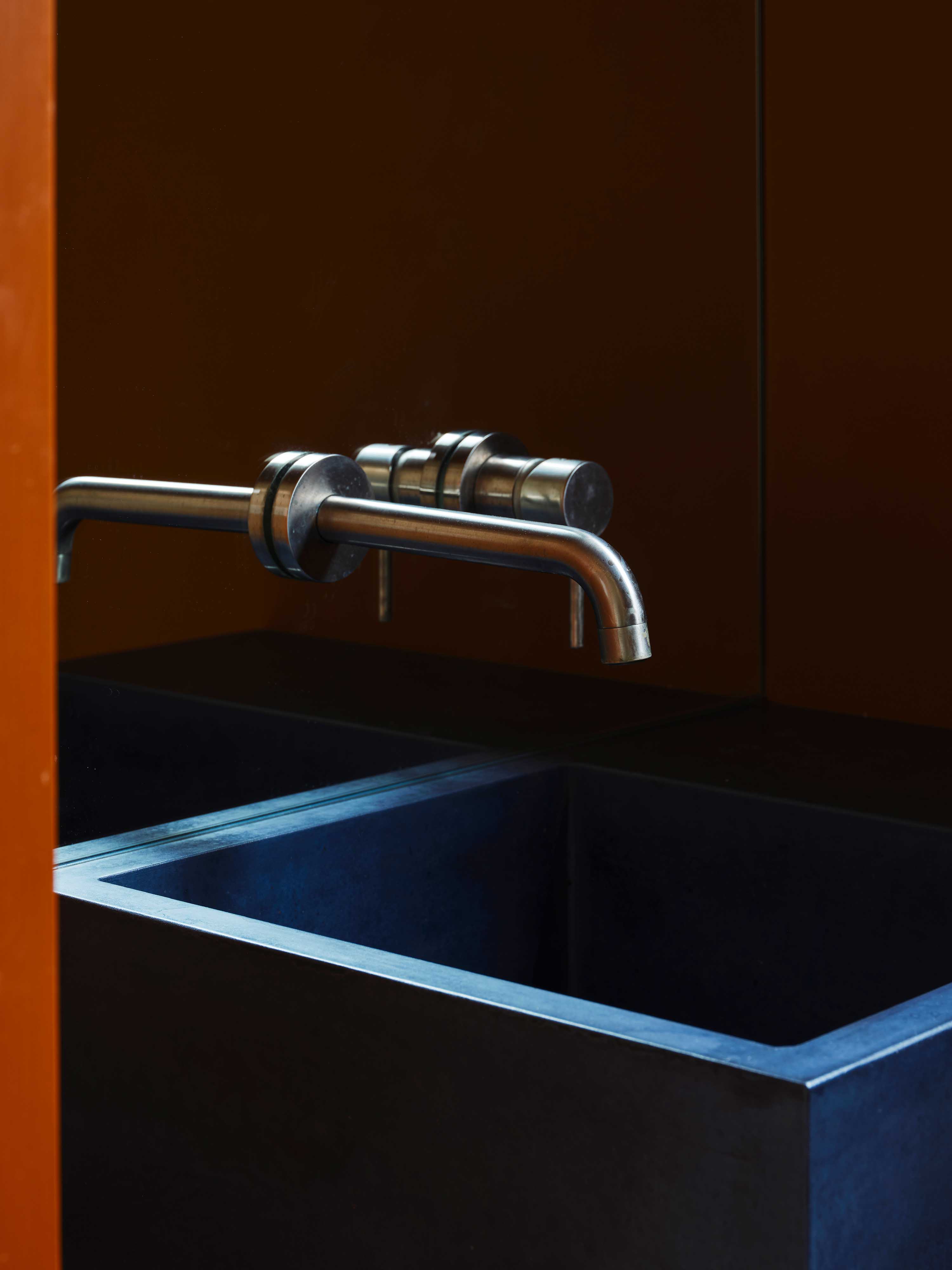 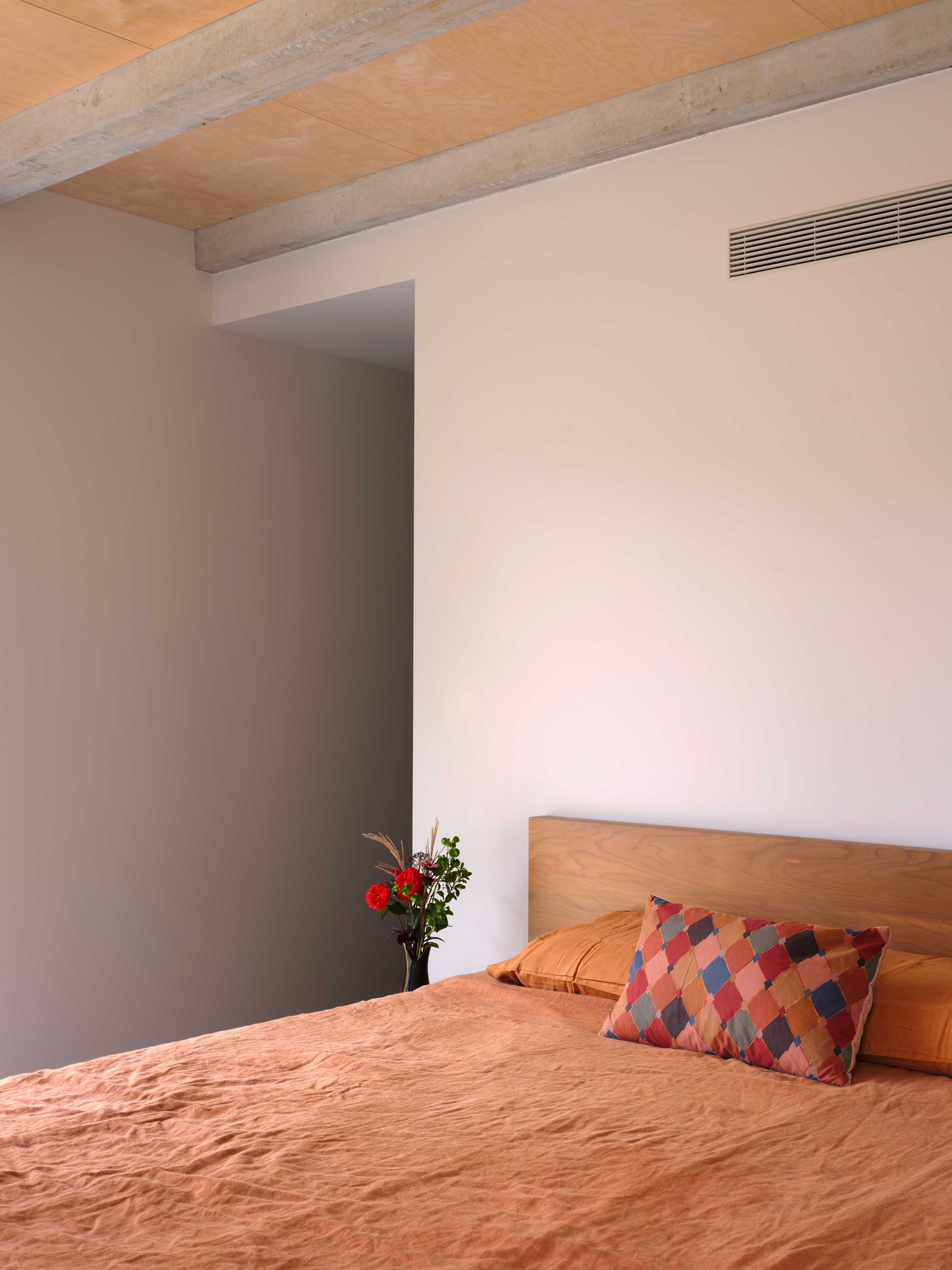 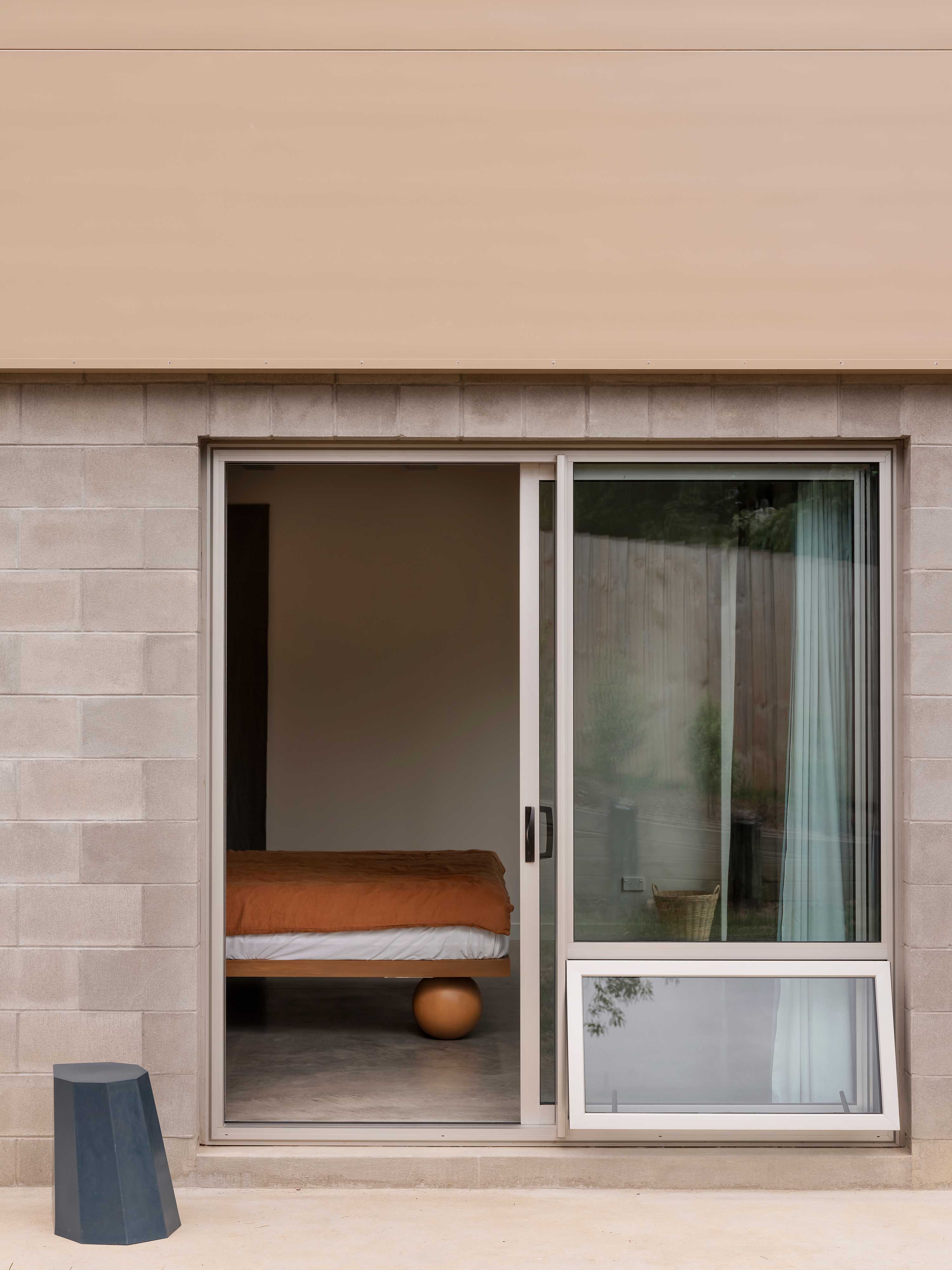 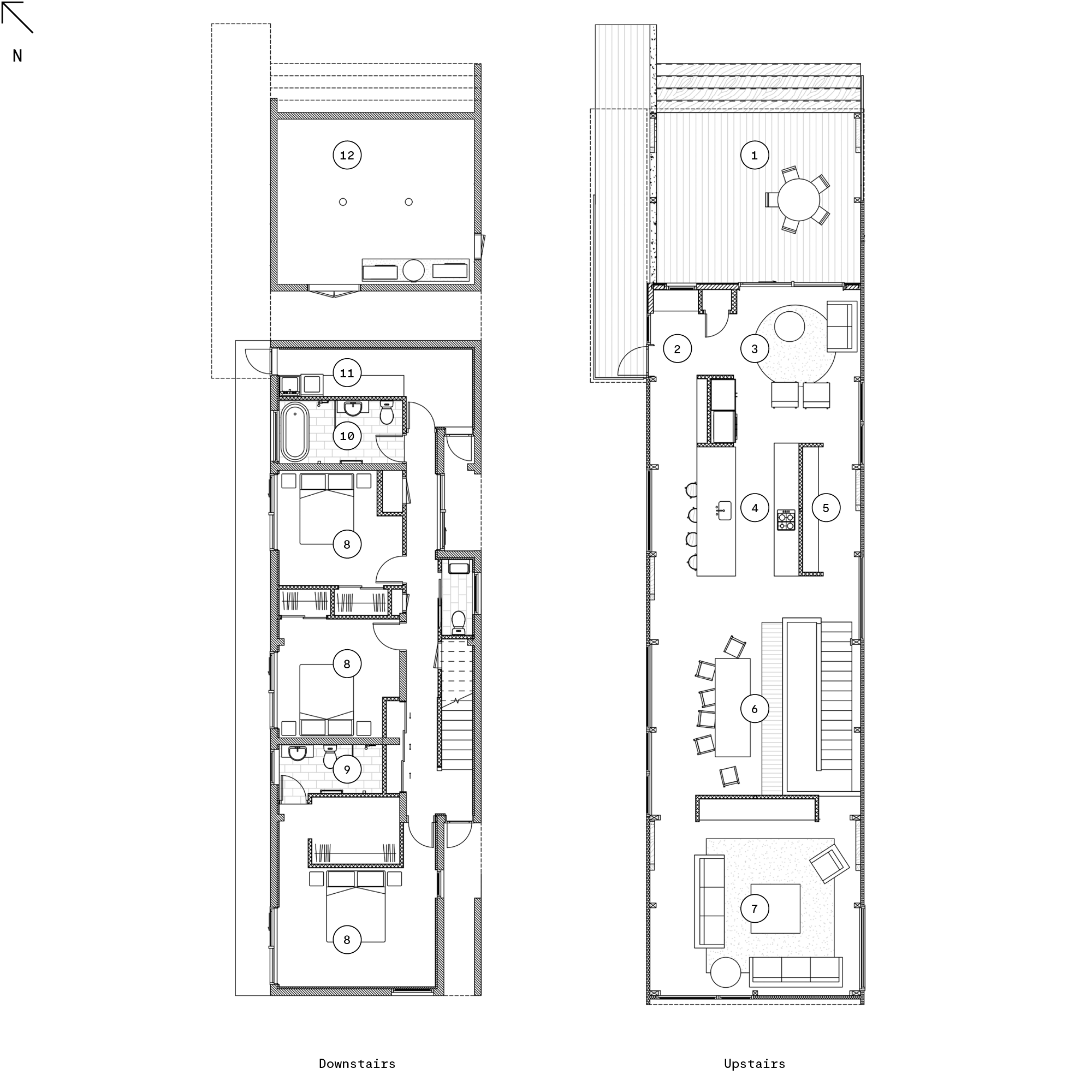