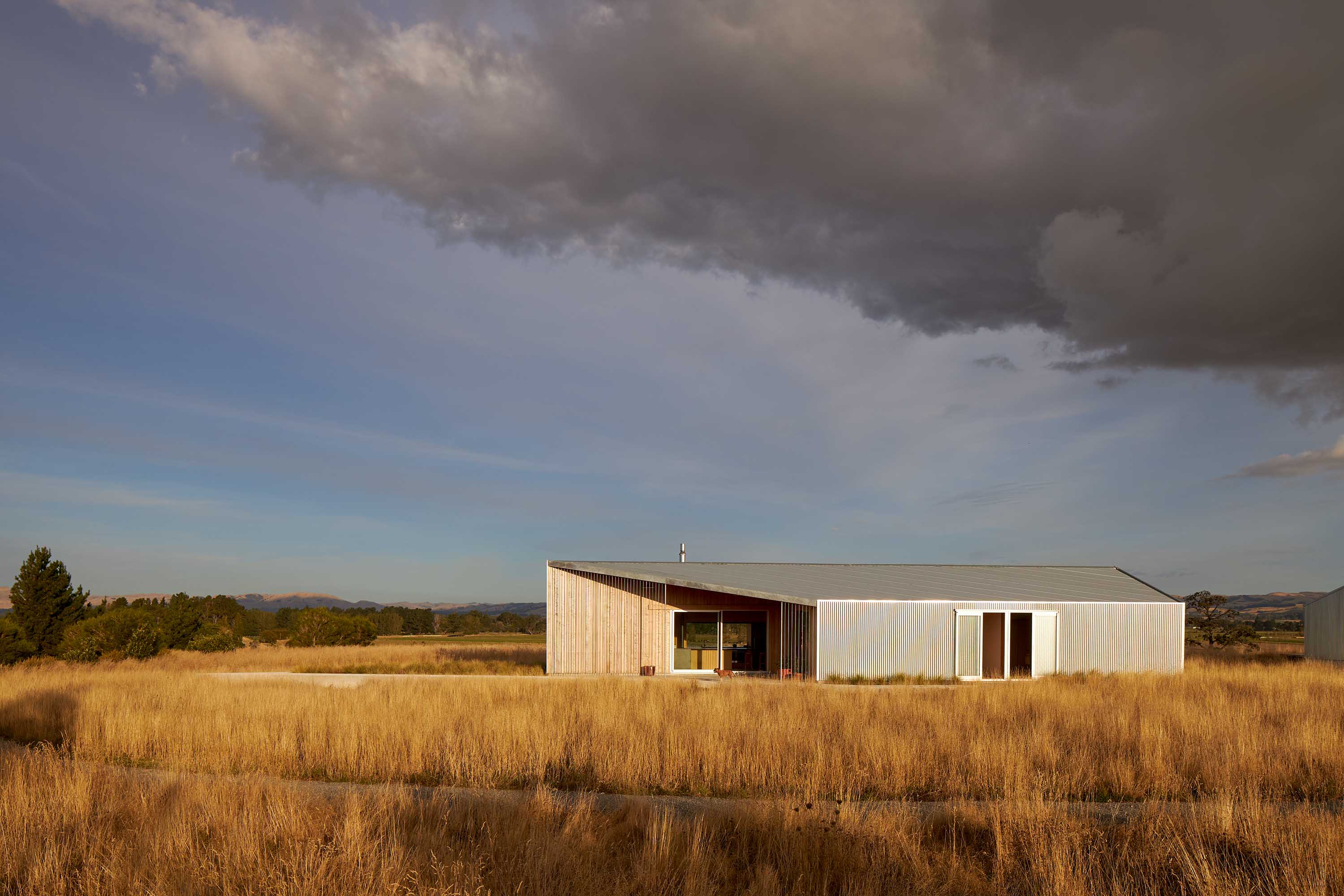 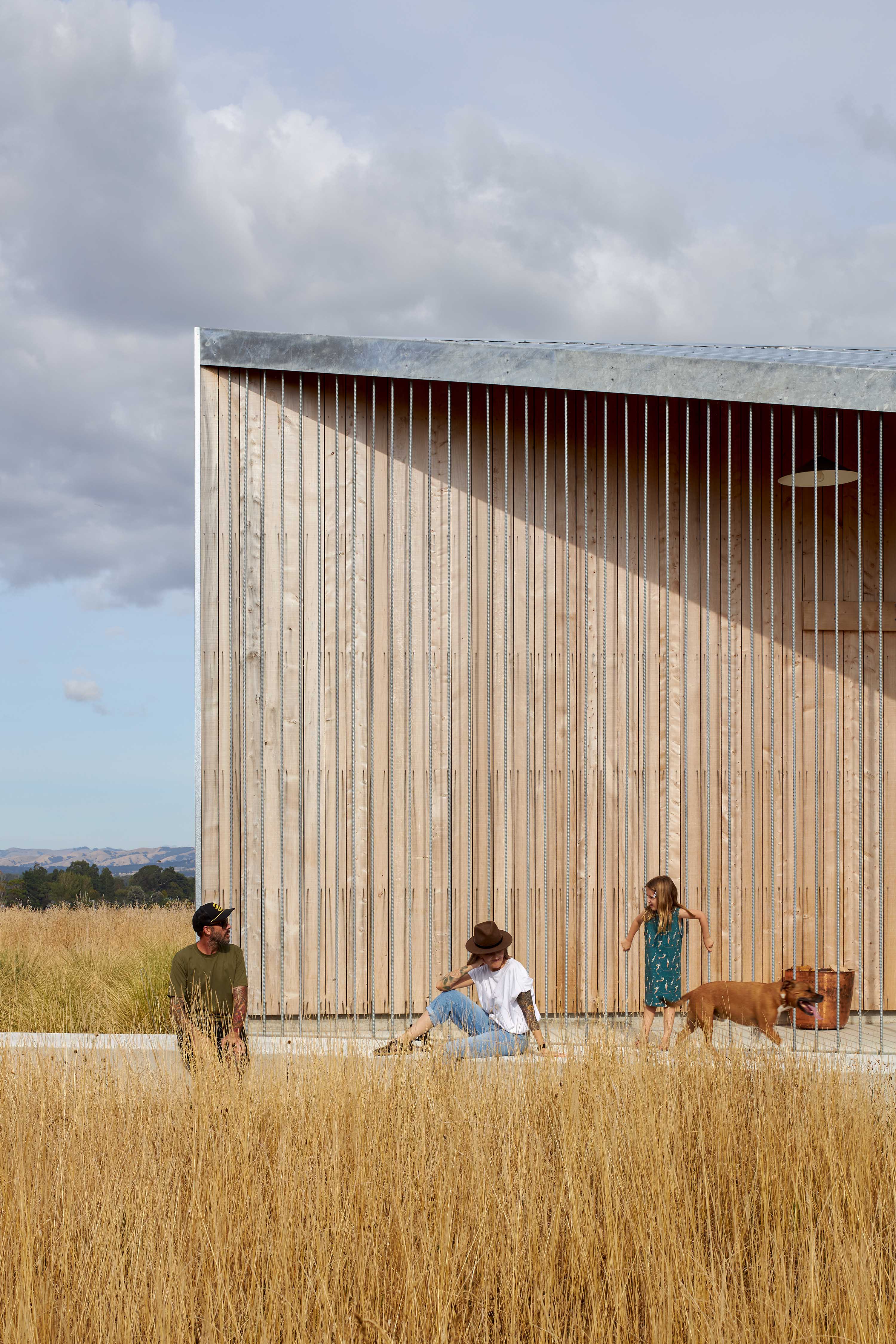 There’s something of the shed in Aotearoa that we can’t relinquish. Part of it is landscape or, more particularly, the difficulty of placing houses in our landscape and still making them look like they belong. A shed is seemingly simple and fits nicely – and this is particularly true of a house near Featherston by Ben Mitchell-Anyon and Sally Ogle of Patchwork Architecture.

Located on a slight rise overlooking rolling country and the Aorangi Range to the southeast, this house is clearly very lovely. But as you drive by, the illusion of a shed obscures it in a blink-and-you-miss-it sleight of hand that sees the house hiding in plain sight. House or shed, you wonder, as it flits into view between trees.

It was to the shed that the owners looked after buying the land. Self-employed and working from home well before the Covid-19 pandemic made such arrangements commonplace, they sought a quiet life in the country, away from cities and noise. They wanted a humble house that fitted without fuss into its rural context, with just enough room for them and visiting family. They said they didn’t want anything grand, but as the architects soon discovered – and as will be obvious from the photographs – they have excellent taste and an eye for detail.

The commission was a fresh challenge for Ben Mitchell-Anyon and Sally Ogle, who are based in Wellington and predominantly design for urban environments. “Initially I found it quite hard designing for the middle of a paddock,” says Mitchell-Anyon. “We’re quite confident with close neighbours and steep hillsides. But give us a paddock and it’s like, what do you do?”

One way was to demarcate the site – to create a transition from the landscape to the house. “So often people do a house in the country and then it looks like this alien thing dropped into the landscape because they put a lawn around it, then a fence around that,” says Ogle. Instead, there’s a distinctive raised concrete path that wraps around the house, and which extends off both ends to a triangular point. Outside the path is paddock; the grass left long. Inside the path is garden, planted with low-maintenance grasses. One side is rural, one side is domestic. “It gives an edge to the building in the landscape, as well as being a seat, or somewhere to stroll with your morning coffee,” she says.

In essence, the house is the simplest possible form they could design, one room deep and clad in galvanised corrugated steel. “We didn’t actually want to do a shed,” says Mitchell-Anyon. “But if you put a galvanised steel building in a paddock it’s going to look like a barn no matter what you do.”

In fact, they ended up with two. Identical in width and height, they are placed end-to-end with their ridgelines aligned: the main house at 128 square metres, and a second shed that pretends to be a garage, but is actually a service bay with a self-contained unit for visitors. One is polished and crisp, the other a little more humble: one is a version of the other. 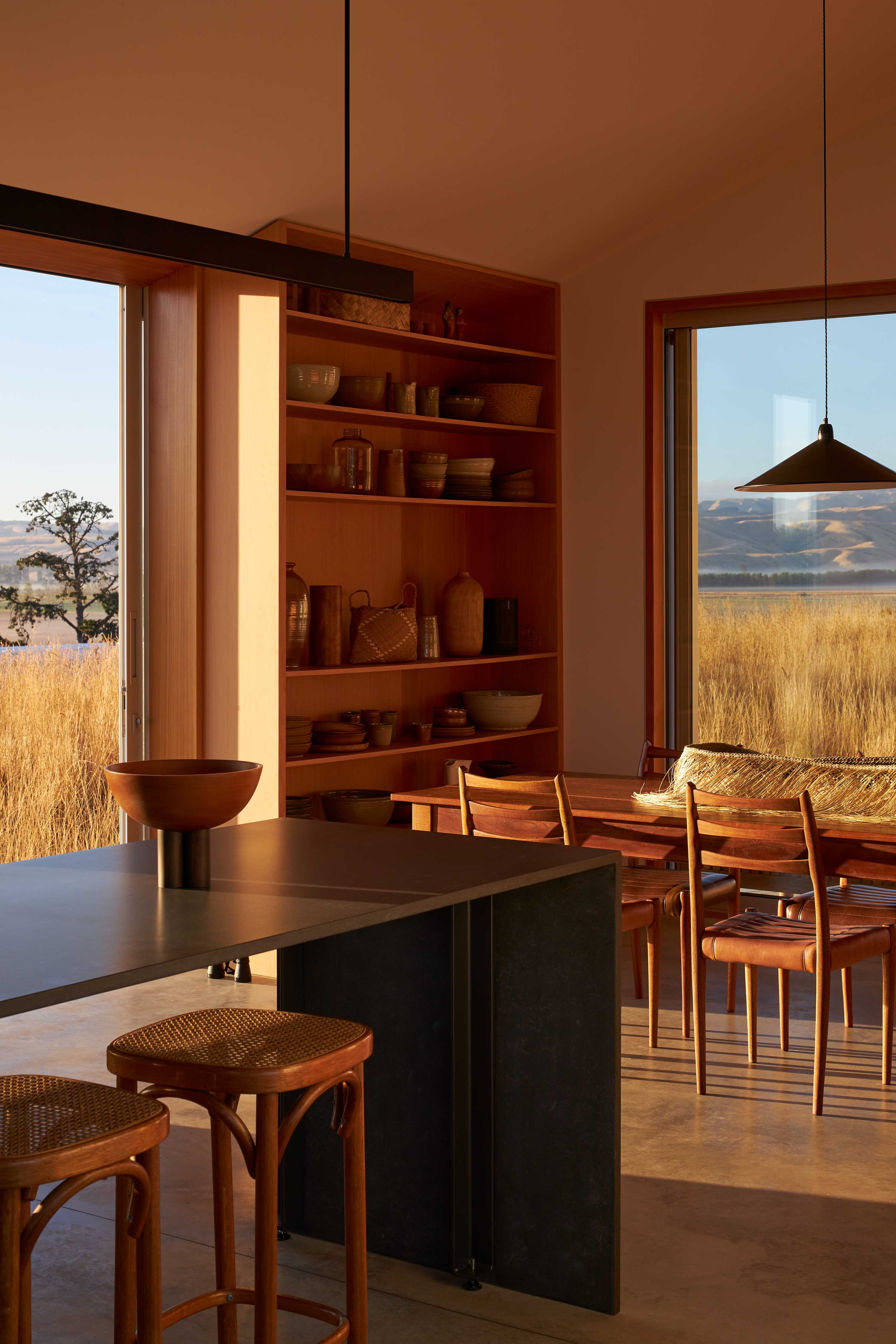 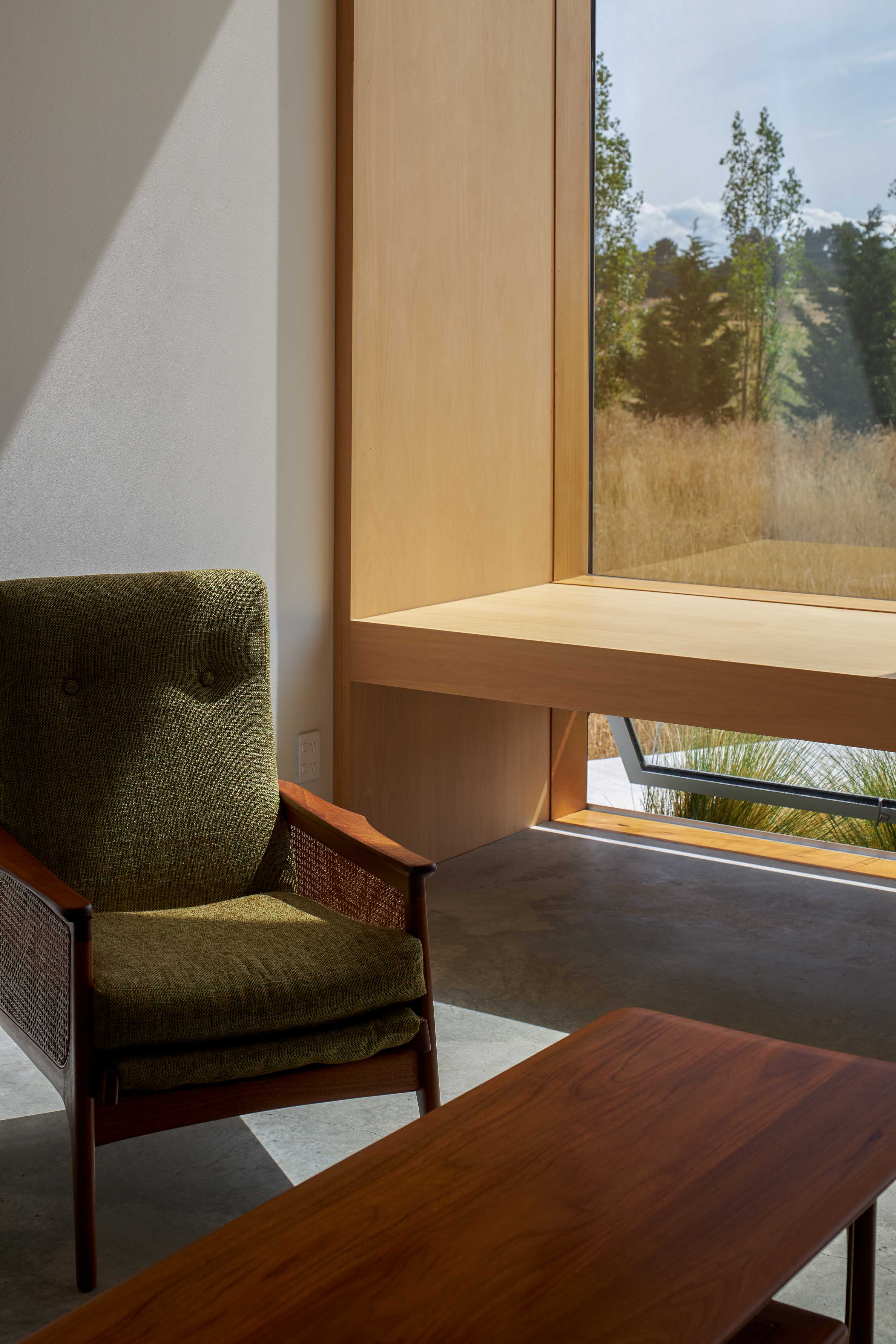 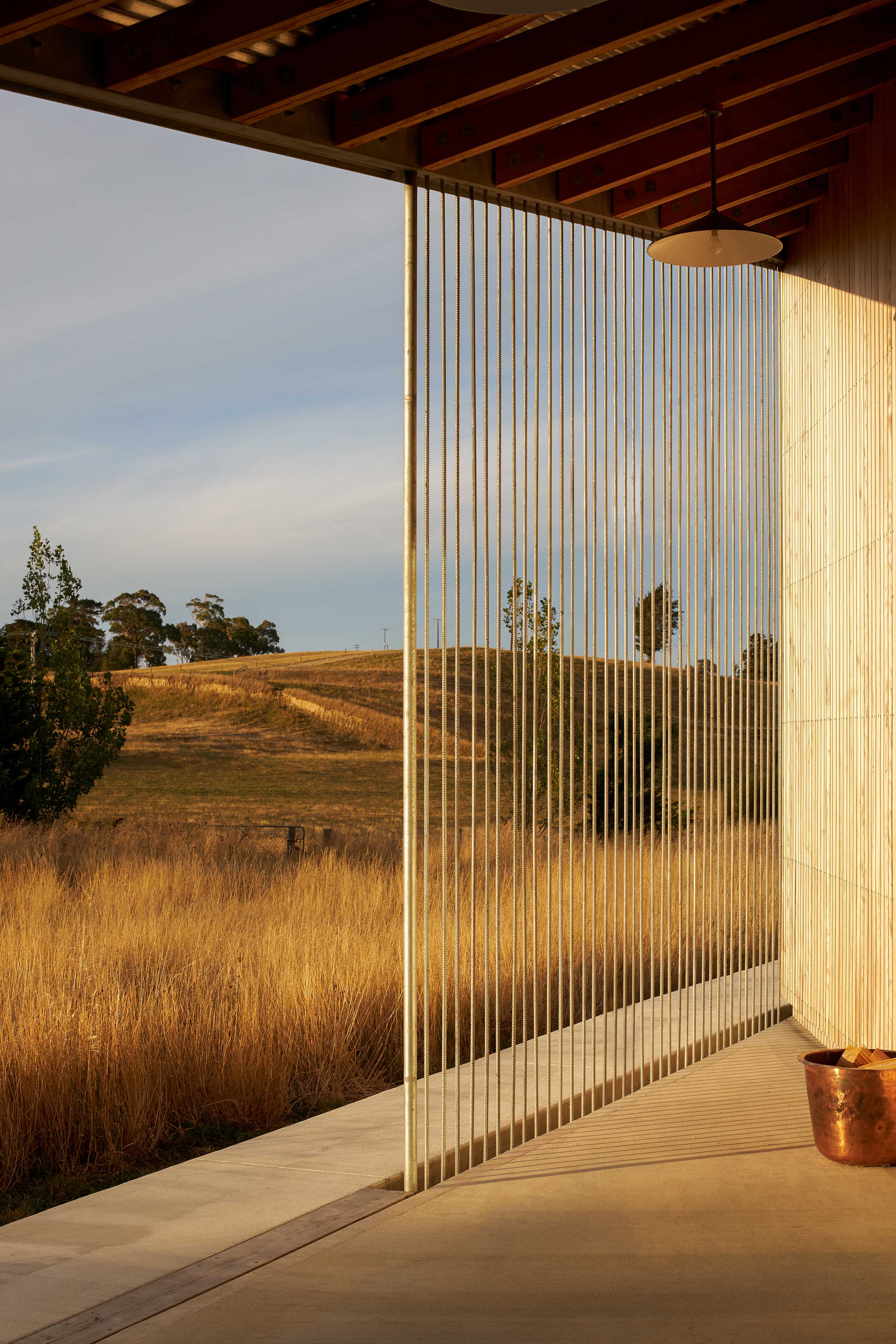 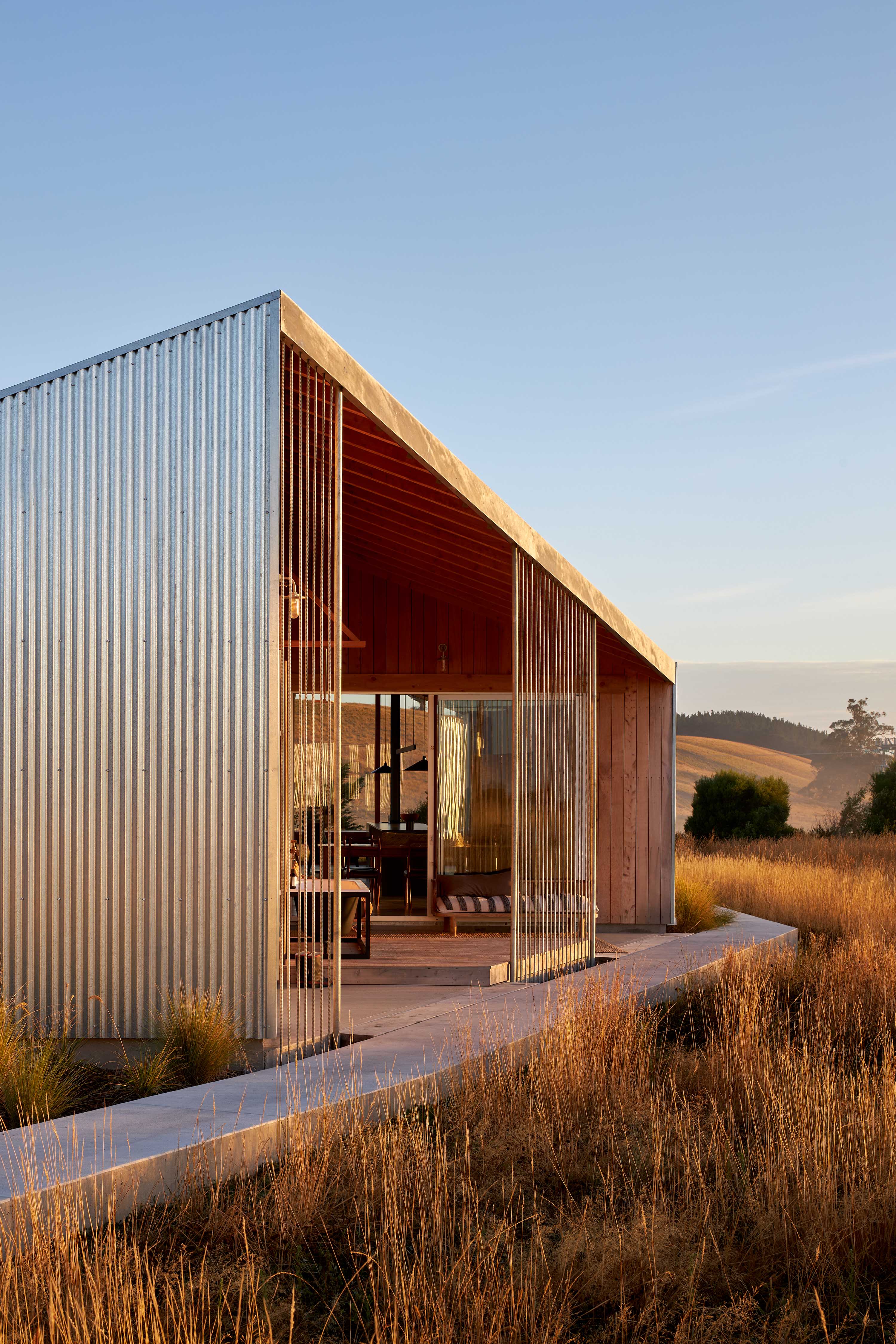 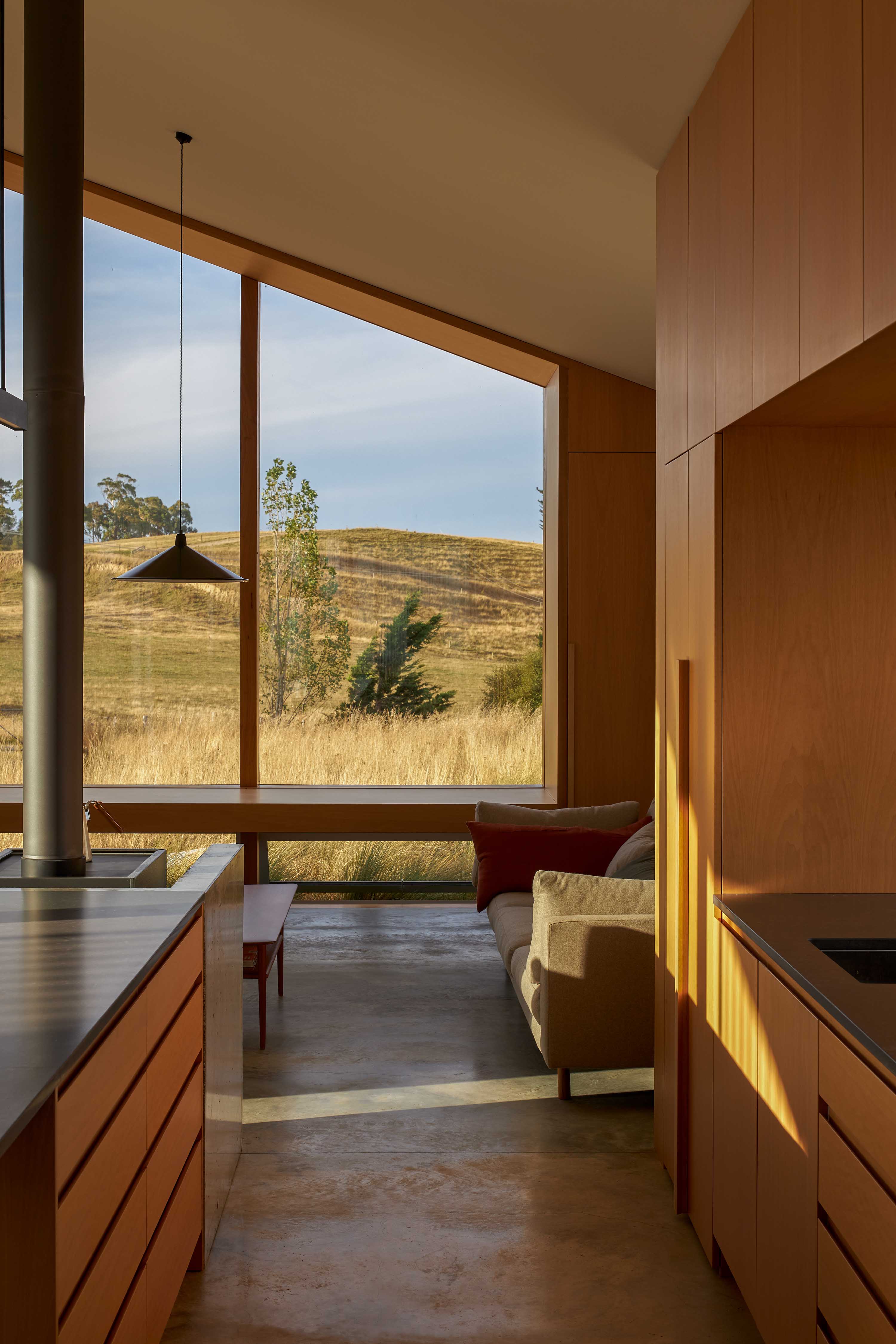 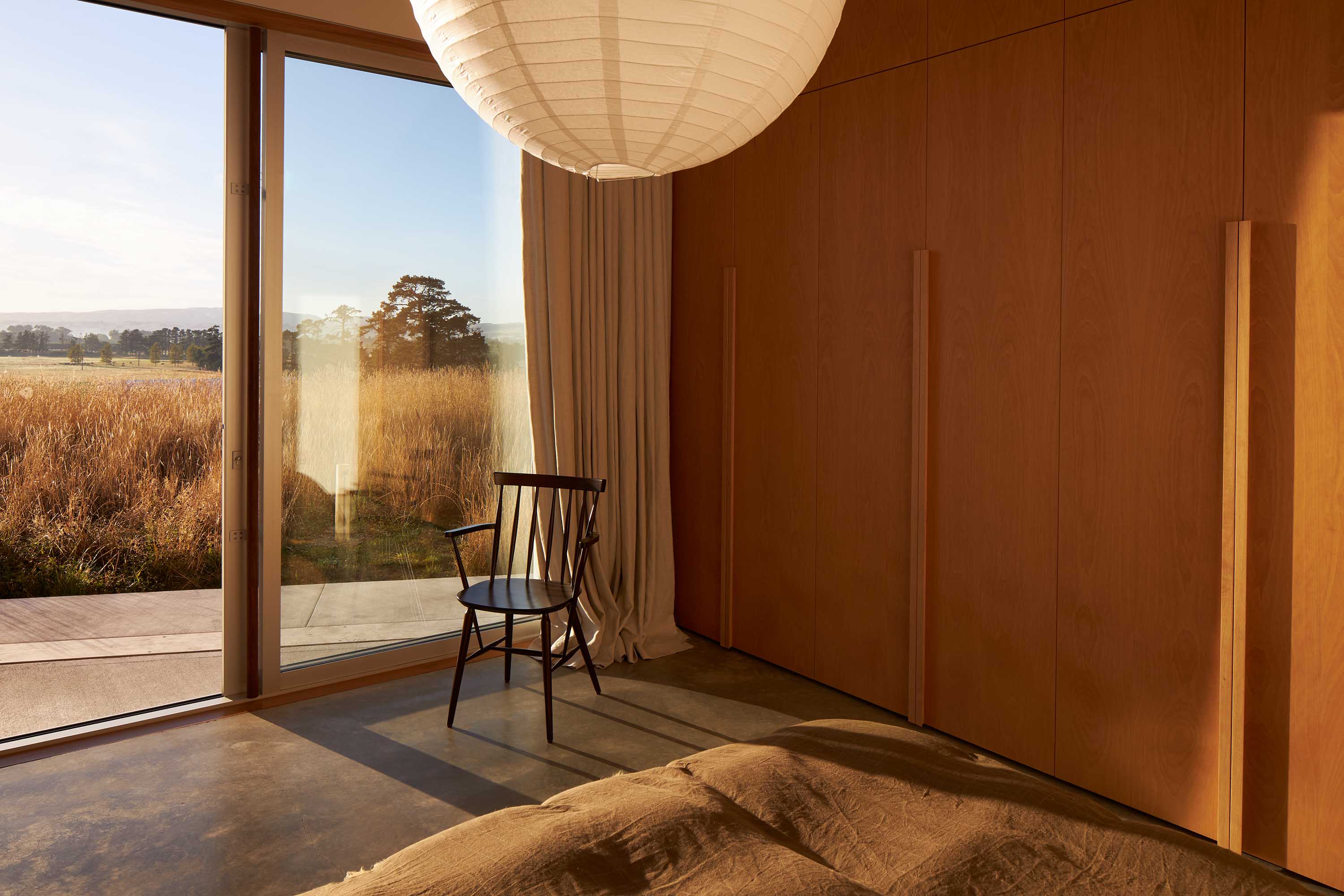 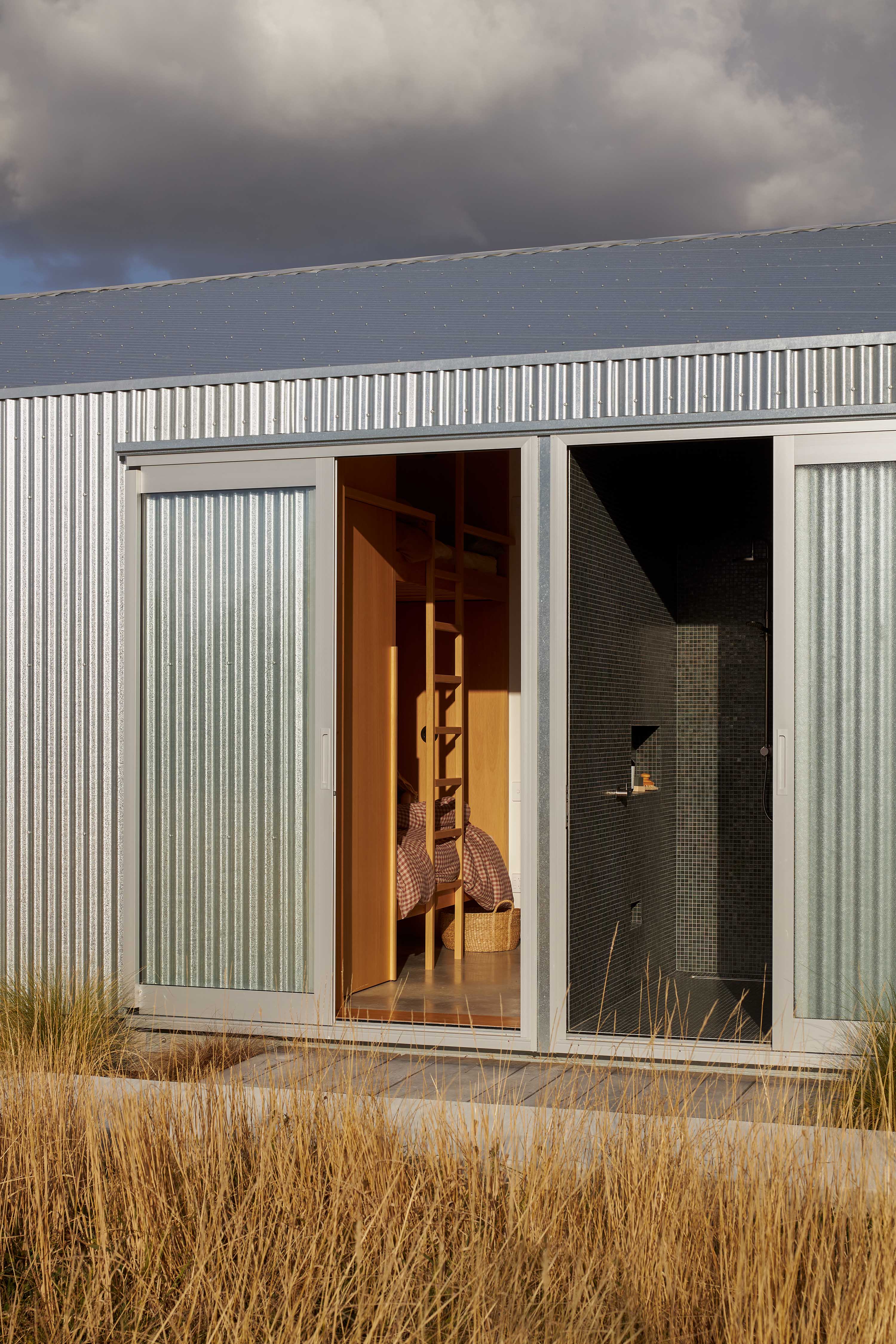 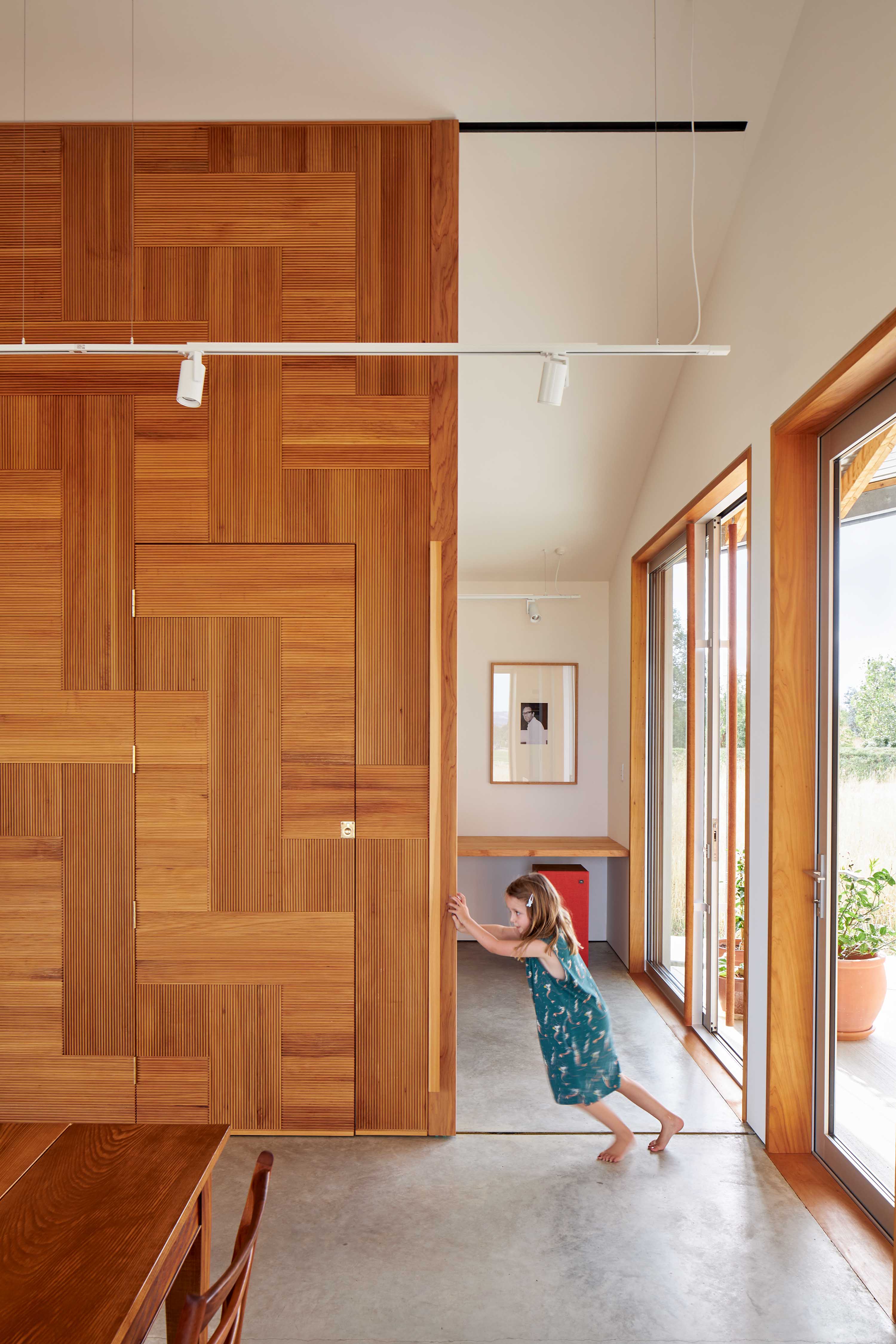 In plan, the house is incredibly simple, yet seemingly complicated – so much so it takes longer to describe than to understand, but it is at this point that the house stops being shed and starts being architecture, so I’ll try.

Mitchell-Anyon and Ogle took a classic pitched-roof shed form and clipped two corners off at a 25-degree angle – one cut on the eastern side and one on the western, to form triangular verandahs on either side of the house. They’re 3.5 metres deep at their widest point, and clad in macrocarpa instead of corrugate, with steel rods reaching from ground to soffit, which will eventually be shrouded in creeper, further protecting the spaces from the elements. On the western side are places to sit; on the eastern side more places to sit and an outdoor bath.

Inside, the triangles left two even rectangles, sliding alongside each other to create an ‘S’-shaped plan, one room deep – one wing houses a generous living area, and one houses a bedroom, bathroom, bunkroom and office, connected to the open living area by a massive sliding timber door, inset with a human-sized door.

The plan creates hard-working spaces, tall but not very wide, with covered outdoor spaces on both sides. And in the windy heat of the Wairarapa, when the north-westerly blows all through spring and into summer, these recesses create welcome shelter. Depending on the sun and the wind, you move around the house chasing shade and shelter – there’s always somewhere to get away from the weather. “They’re just great spaces,” says Mitchell-Anyon, “you don’t need a huge covered outdoor space.”

Inside, the living spaces feel grand. The stud is 2.6 metres at the eaves and 4.2 metres at the ridge, and the living spaces are generous, even though there’s really only one proper bedroom, which gives the space an unusual scale. The living spaces could easily attach to a house twice its size with three times the bedrooms. “They built a house for them,” says Ogle. “They weren’t worried about its resale value, they just said this is what we want for our life. They prioritised what works for them.”

Materials are humble – painted plasterboard, macrocarpa, polished concrete floors – but impeccably detailed. Cabinetry runs from the kitchen along the wall and wraps around into a window seat beneath glazing that occupies the entire northern elevation of the house. The kitchen island is 4.2-metres long, running the length of the space, anchoring it. There is a window level with the kitchen bench behind the cooktop so you can look over the hills as you cook. The bathroom is tiled with 20mm square dark-green glass mosaics across walls, floor and ceiling.

But the sliding tukutuku-panel door is the big moment and an art work in itself. Floor-to-ceiling, clad in macrocarpa routed with a poutama pattern of the clients’ design, it represents his Māori culture and heritage. It is special, enormous at 4x4-metres and beautifully executed... Which is quite unlike a shed at all. 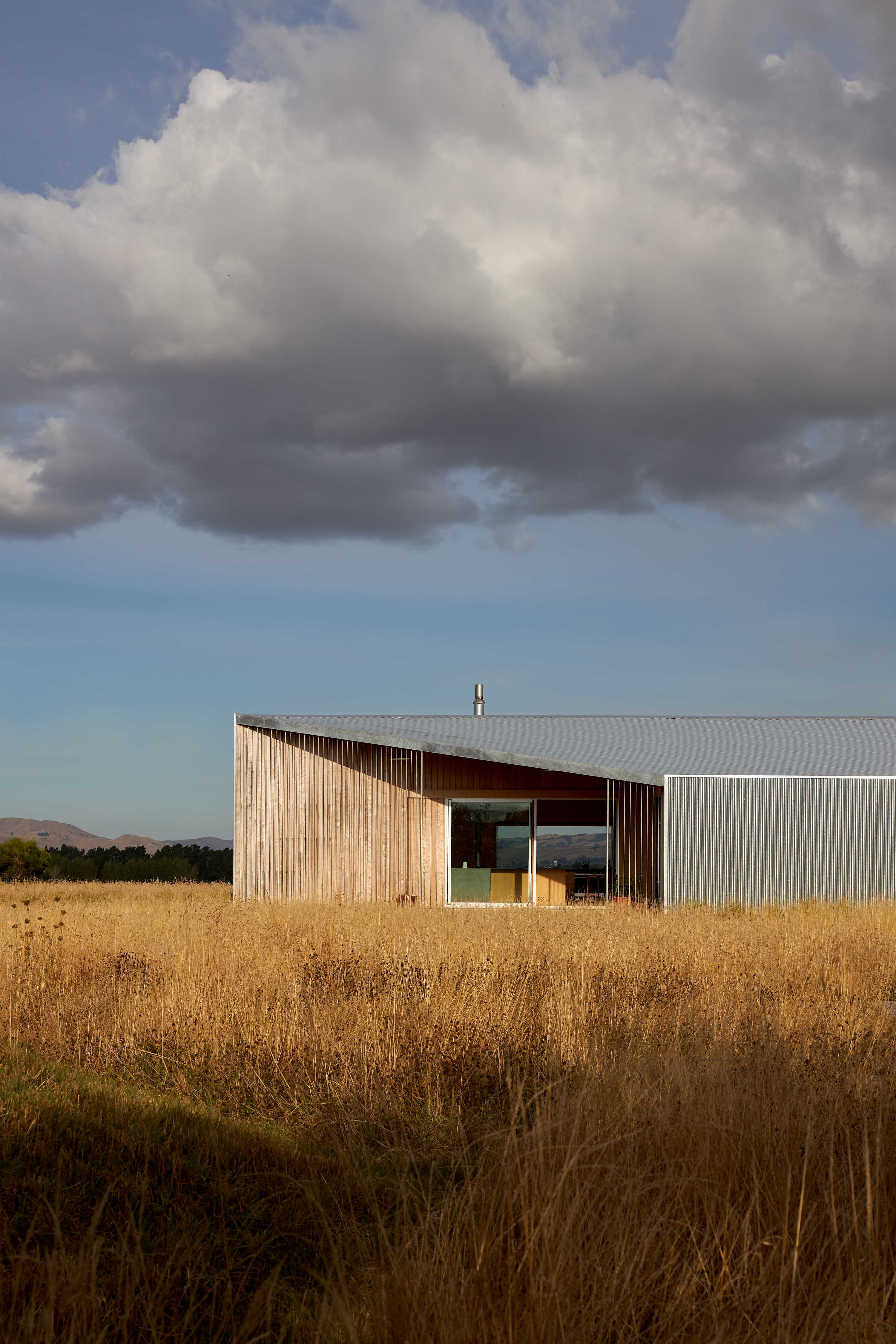 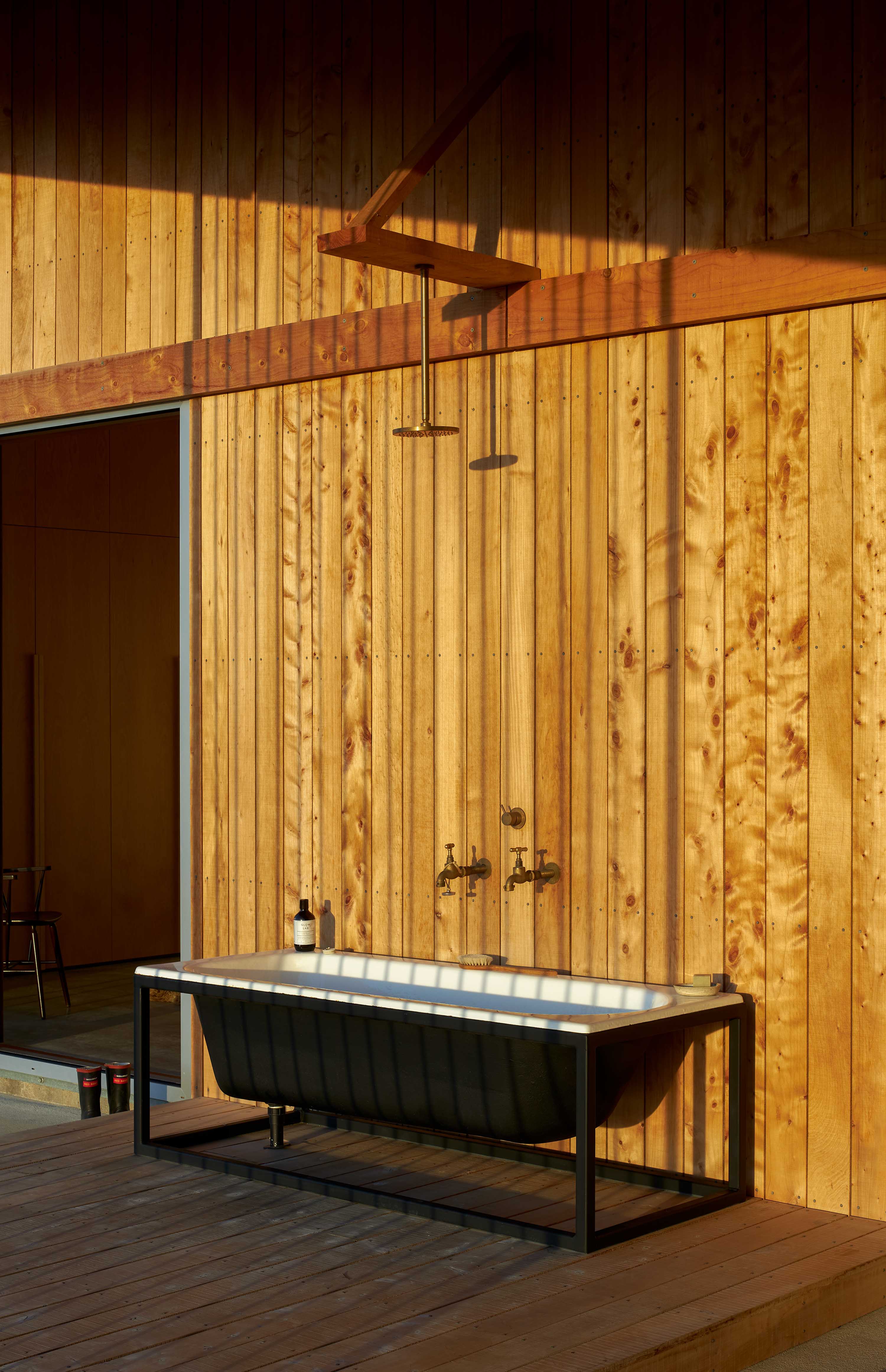 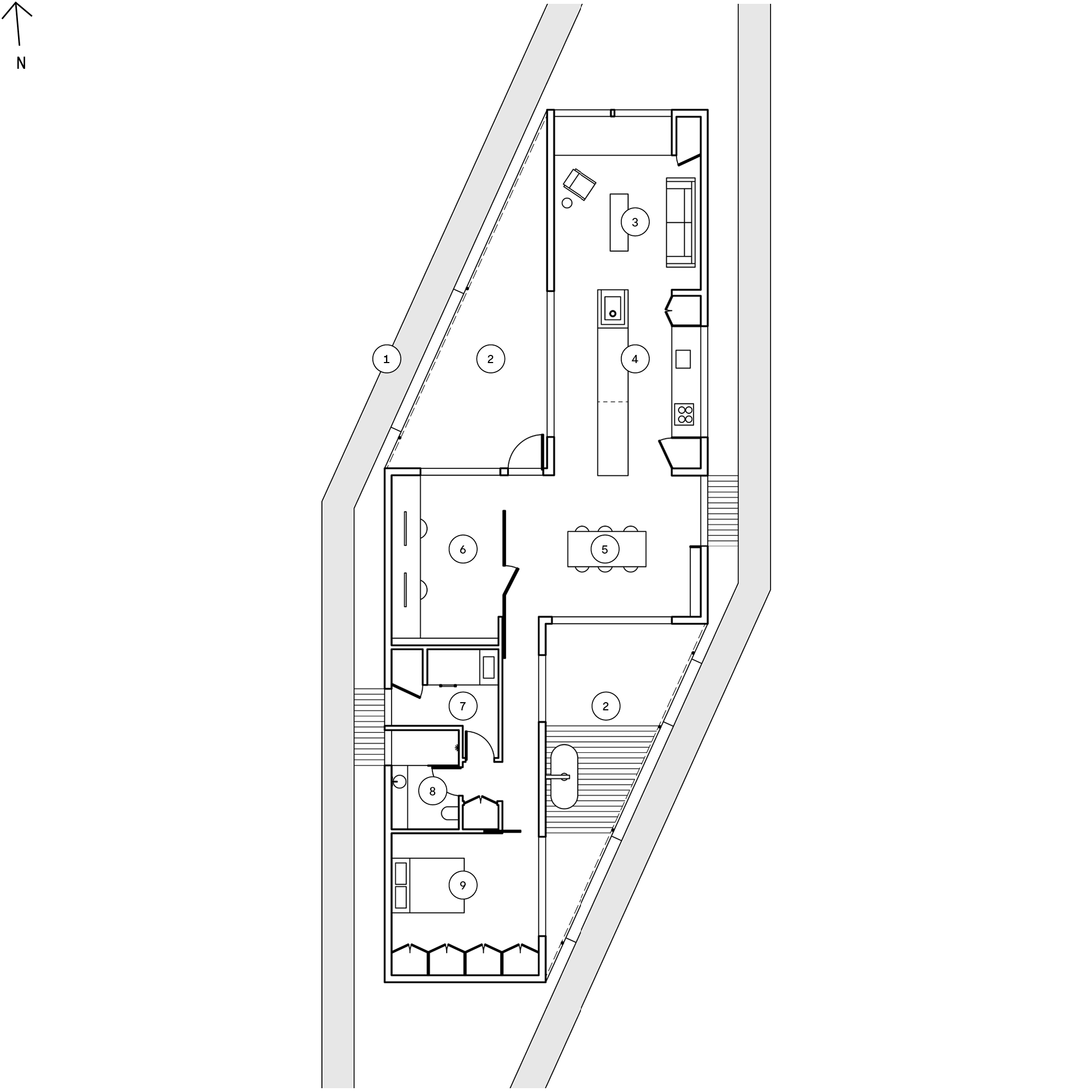