A sensitive renovation by architect Mike Hartley unlocks the potential of his family home in Beach Haven, Tāmaki Makaurau. 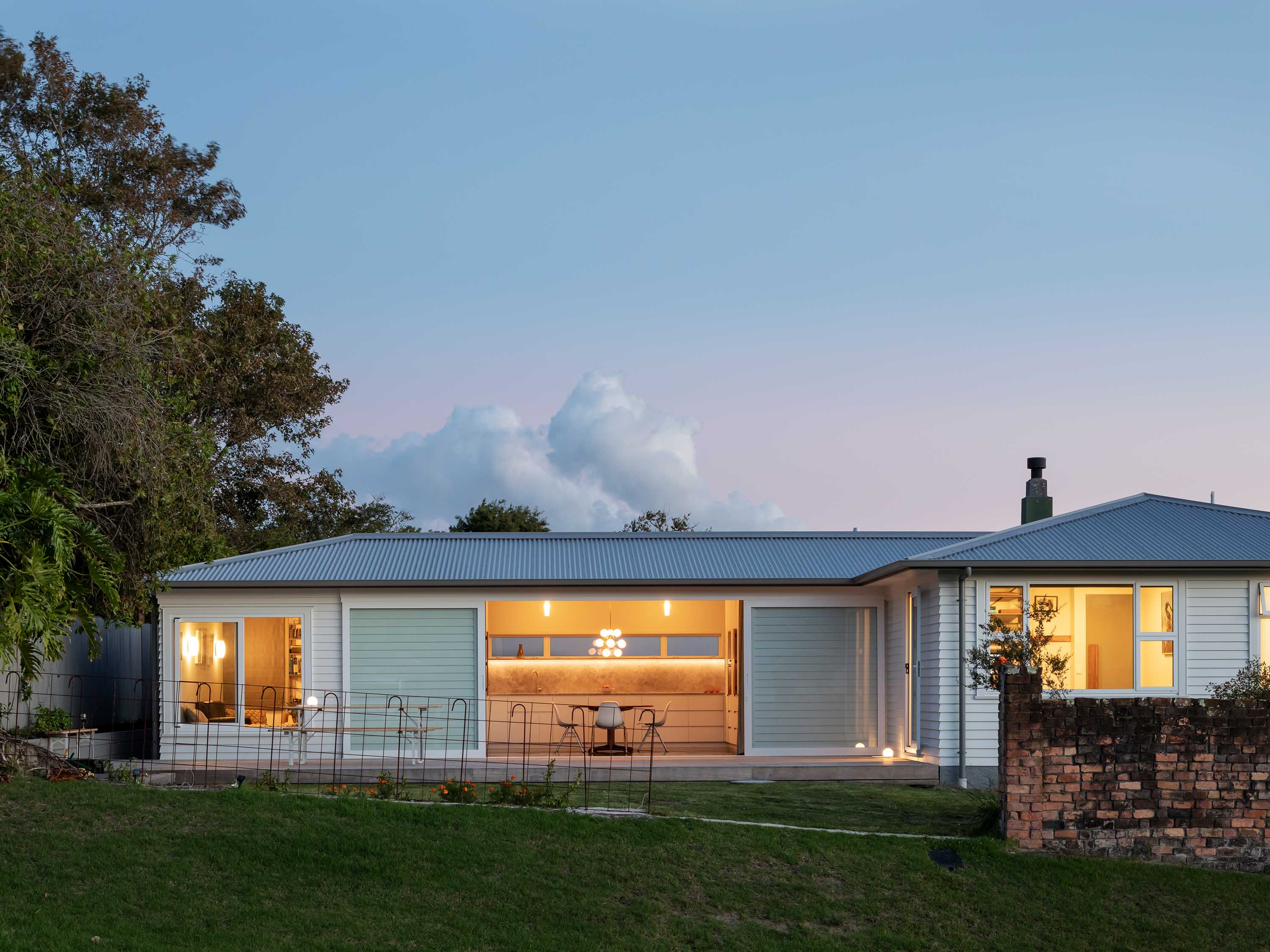 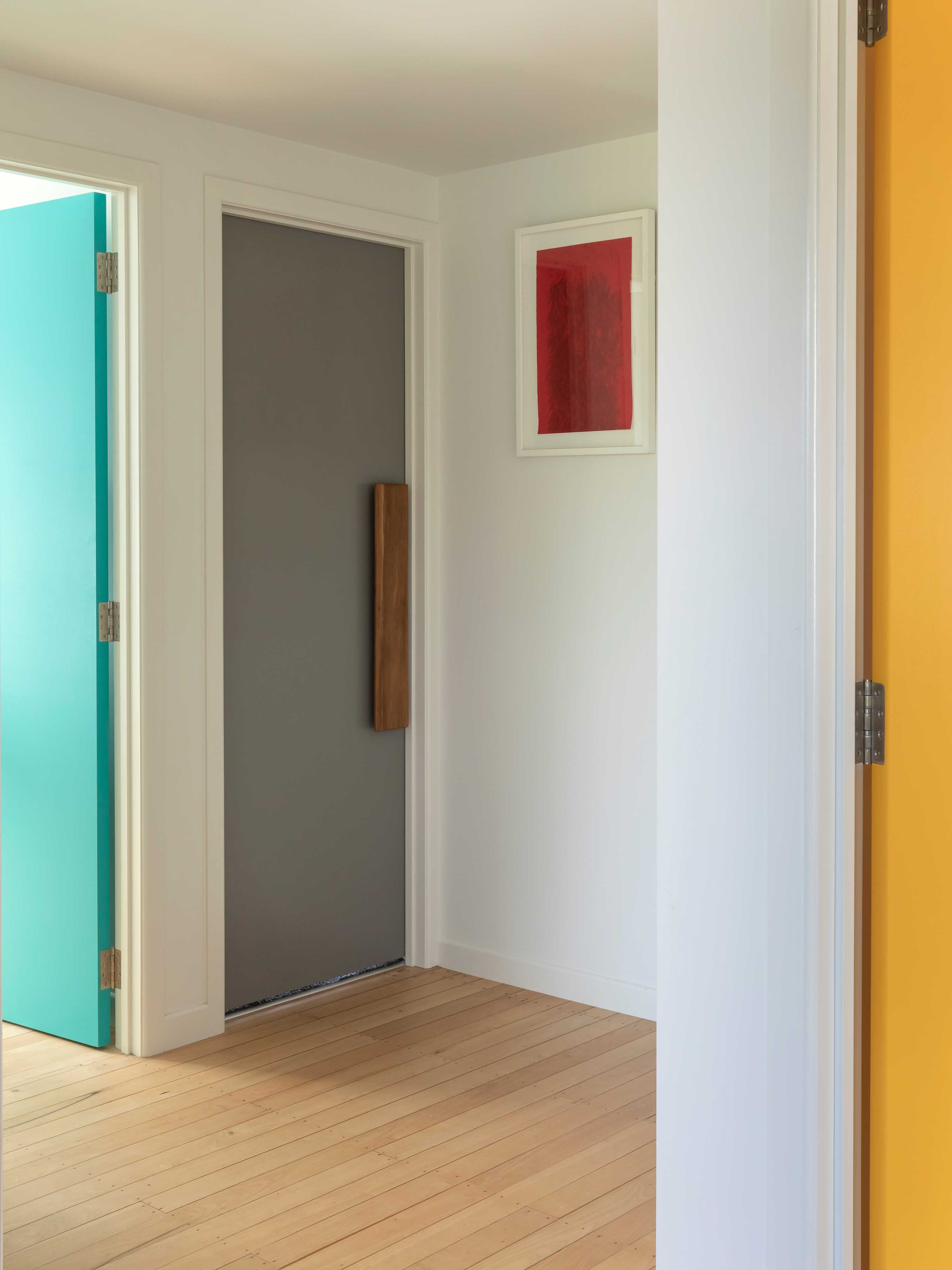 The day the builders started working at the house of Mike and Sarah Hartley, the digger knocked over their tall brick wall. The structure originally followed the north and western boundaries of their corner section in suburban Beach Haven, a gentrifying part of Tāmaki Makaurau Auckland’s North Shore, and did a spectacular job of shielding them from the street.

The builders were apologetic and promised to repair it. But the next time they visited, Mike and Sarah liked how open it was, and told them not to bother. “Then when we moved back in, we got to know everyone,” says Mike. “And we’d been here 10 years!”

Built in the 1950s with a hipped roof and weatherboards, the original house was 80 square metres with two bedrooms, a small bathroom and a separate laundry. It sat smack in the middle of an 809-square-metre section: a box, essentially, with everything in the wrong place and nowhere near enough space for two adults and three kids.

By 2020, after the first Covid lockdown, things really began to bite. The kids were sharing the larger of the two bedrooms, nicknamed “the dormitory”, and Mike and Sarah were jammed into the smaller one. There was also no connection with the outdoors. “Because of the way the house sat, we just never came out here,” says Mike, standing on the new north-facing deck, looking out over the street to the Greenhithe hills beyond. “It’s unlocked everything for us.”

Mike and Sarah have long planned to do something here. The land is zoned mixed housing suburban under Auckland’s Unitary Plan: this allows for up to three dwellings, and once changes required by the Government’s medium density residential standards come into play at the end of this year, the height and size allowance of those buildings could be even more generous. The home’s corner position is advantageous too, allowing access on two sides, rather than down a driveway.

There’s been a lot written about both the new standards and the unitary plan – both of which encourage more development on suburban sites. While everyone agrees we need to use land better, many are understandably worried about what will happen next door, and whether they’ll be overshadowed and overlooked. But it’s more complex, more nuanced than that – such concerns assume houses like Mike and Sarah’s will be demolished and intensive new forms of housing built. While that’s happened in some places, the cost of building makes that an expensive undertaking, and the rules also seem to cater for types and styles of development that might change and adapt over time, as their occupants grow and change. 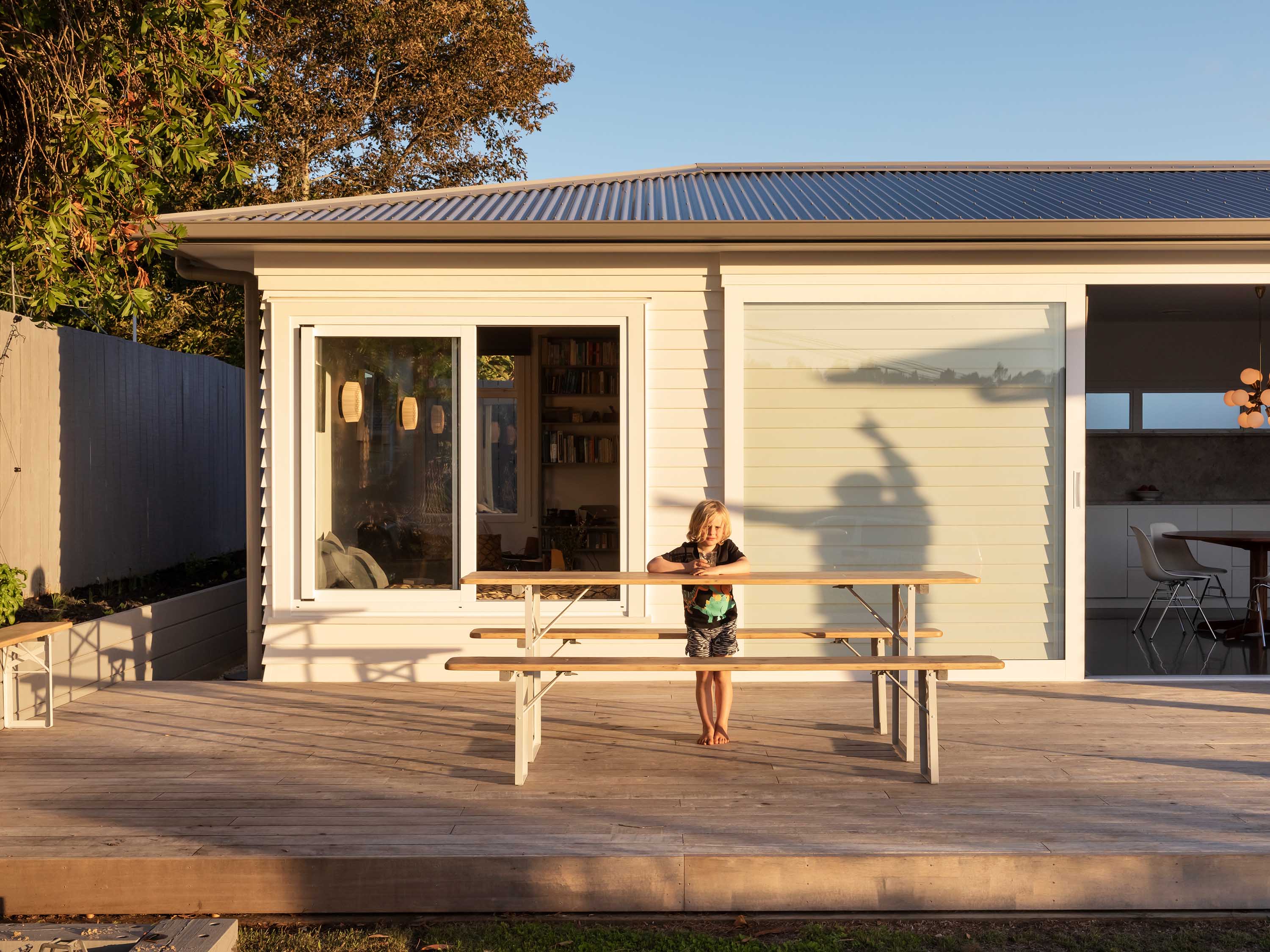 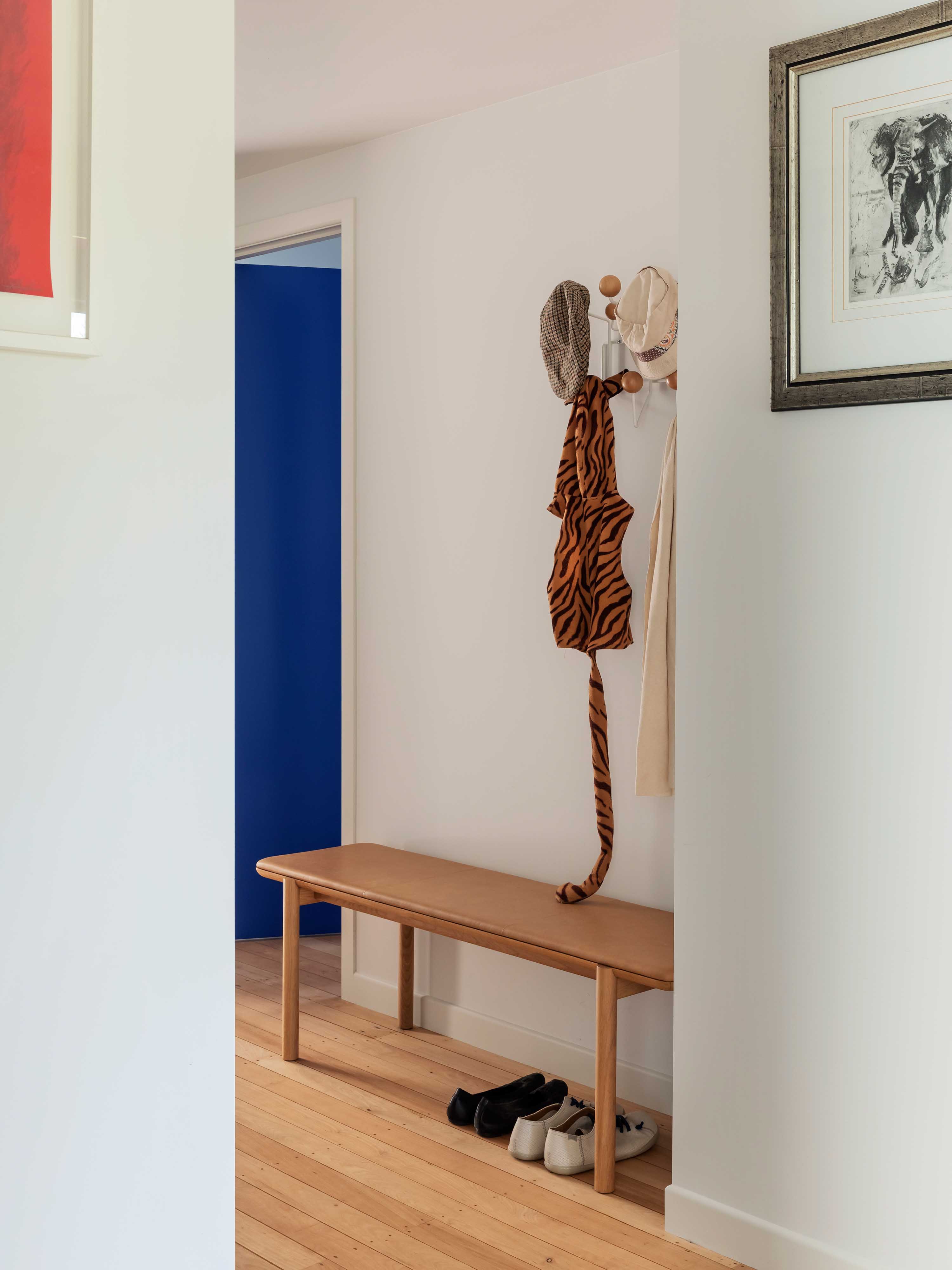 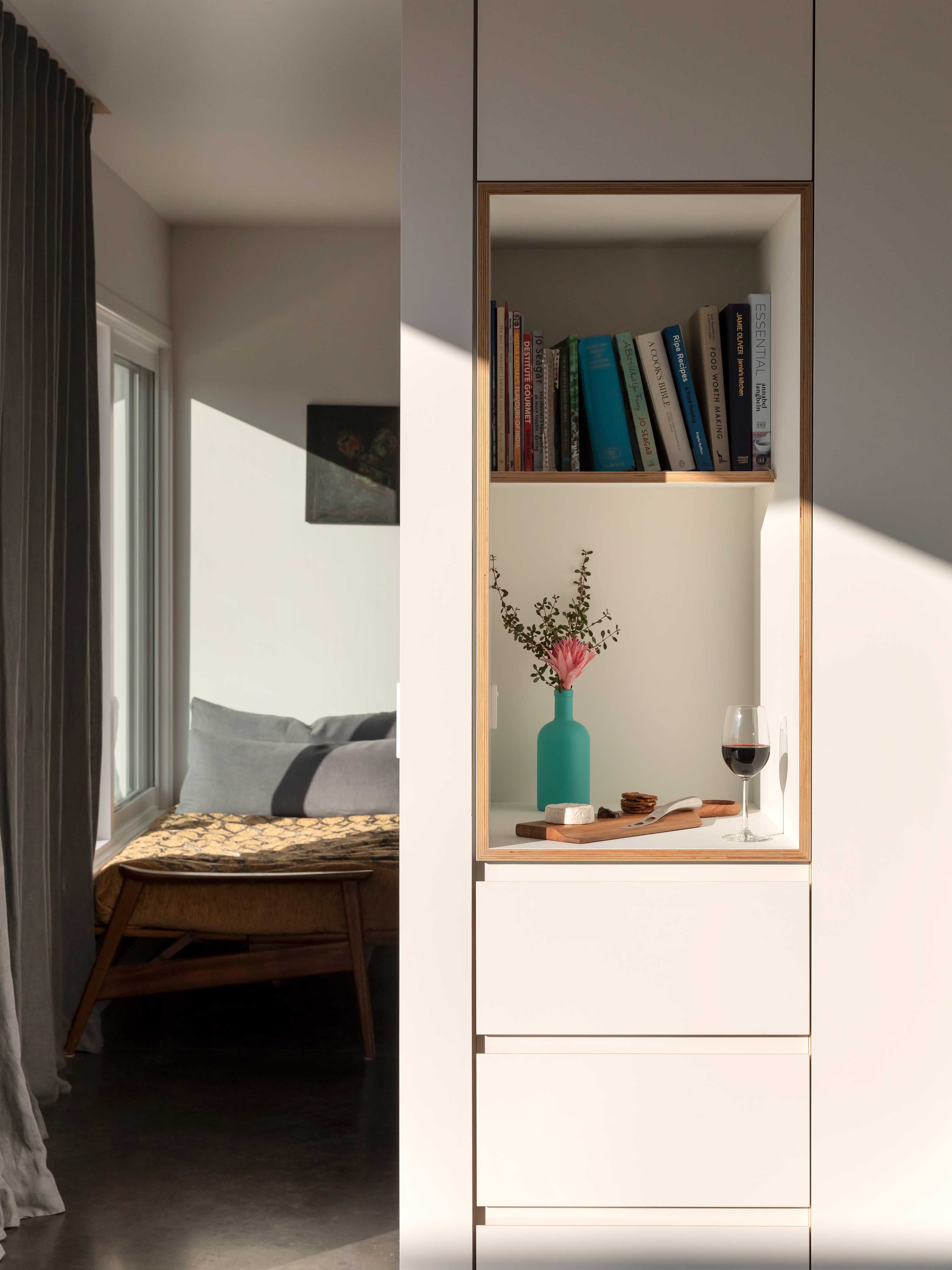 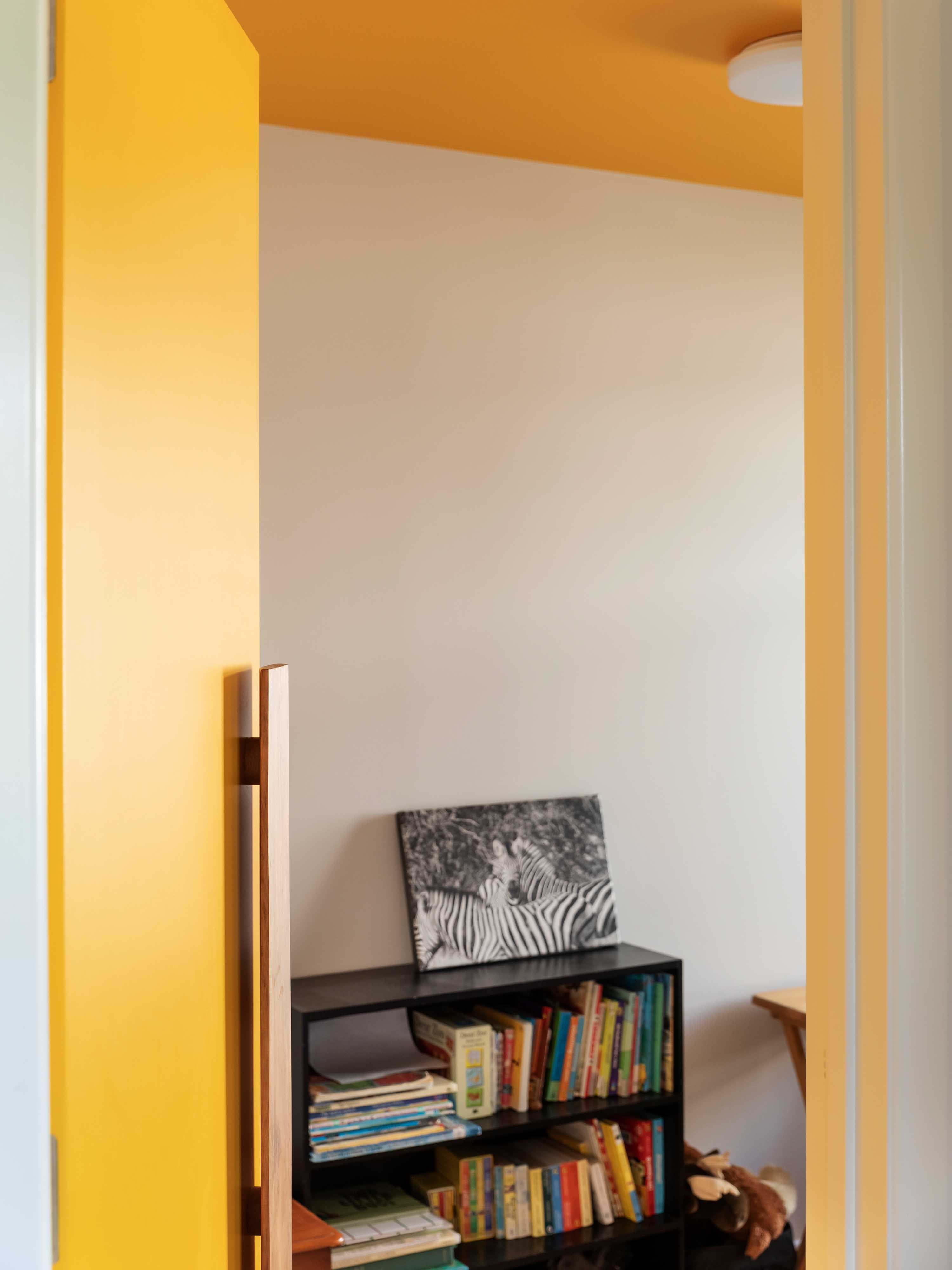 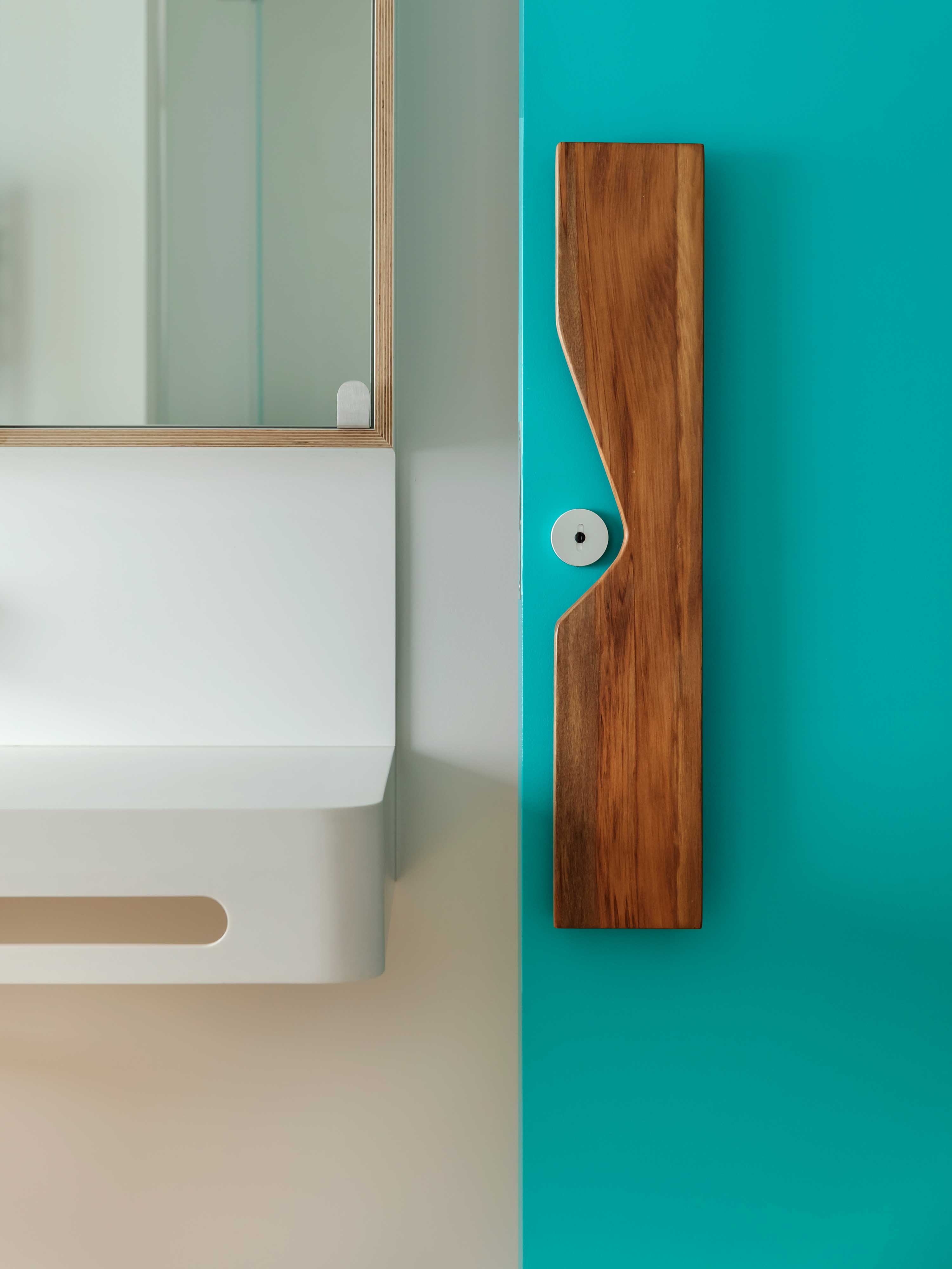 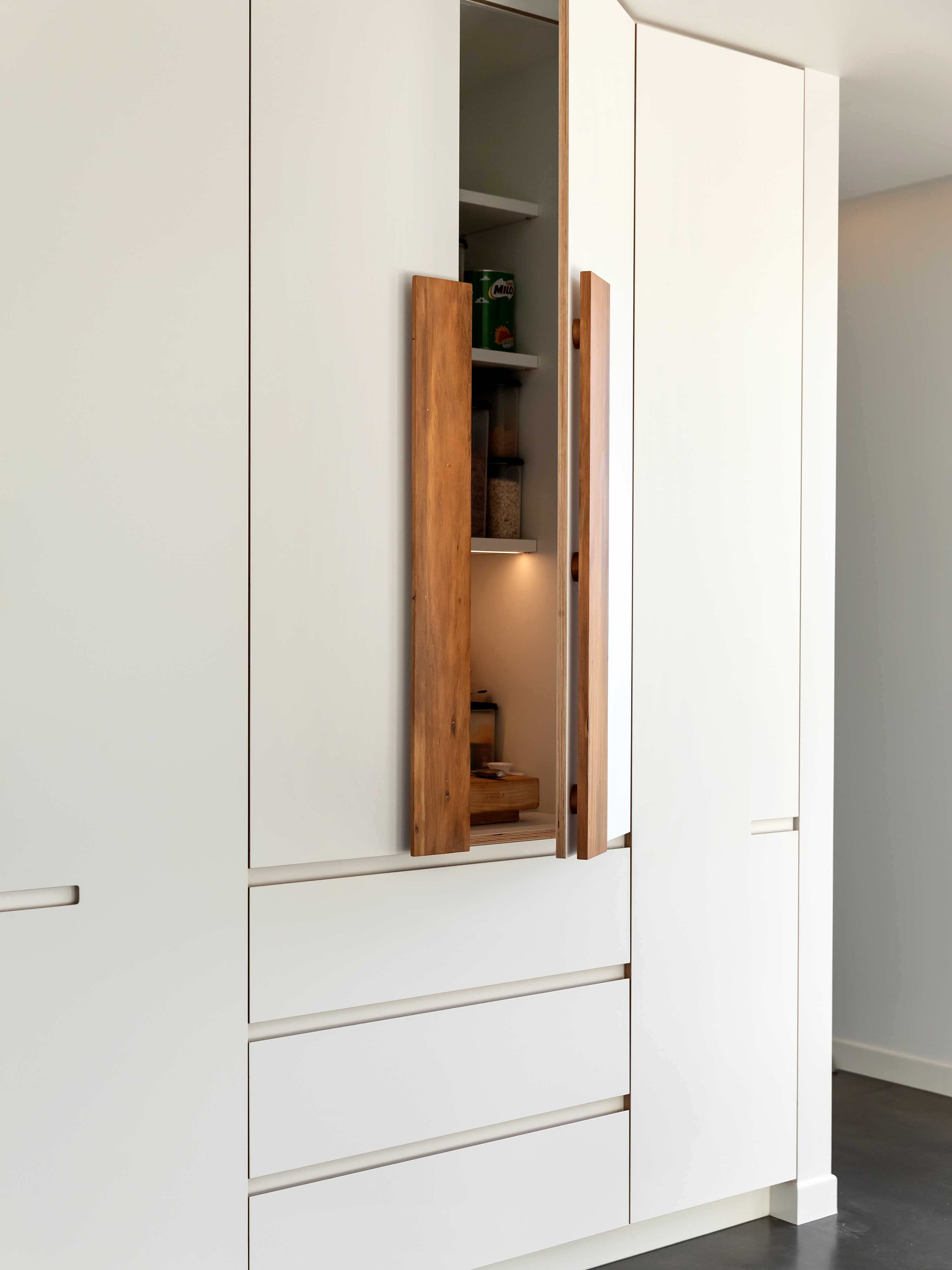 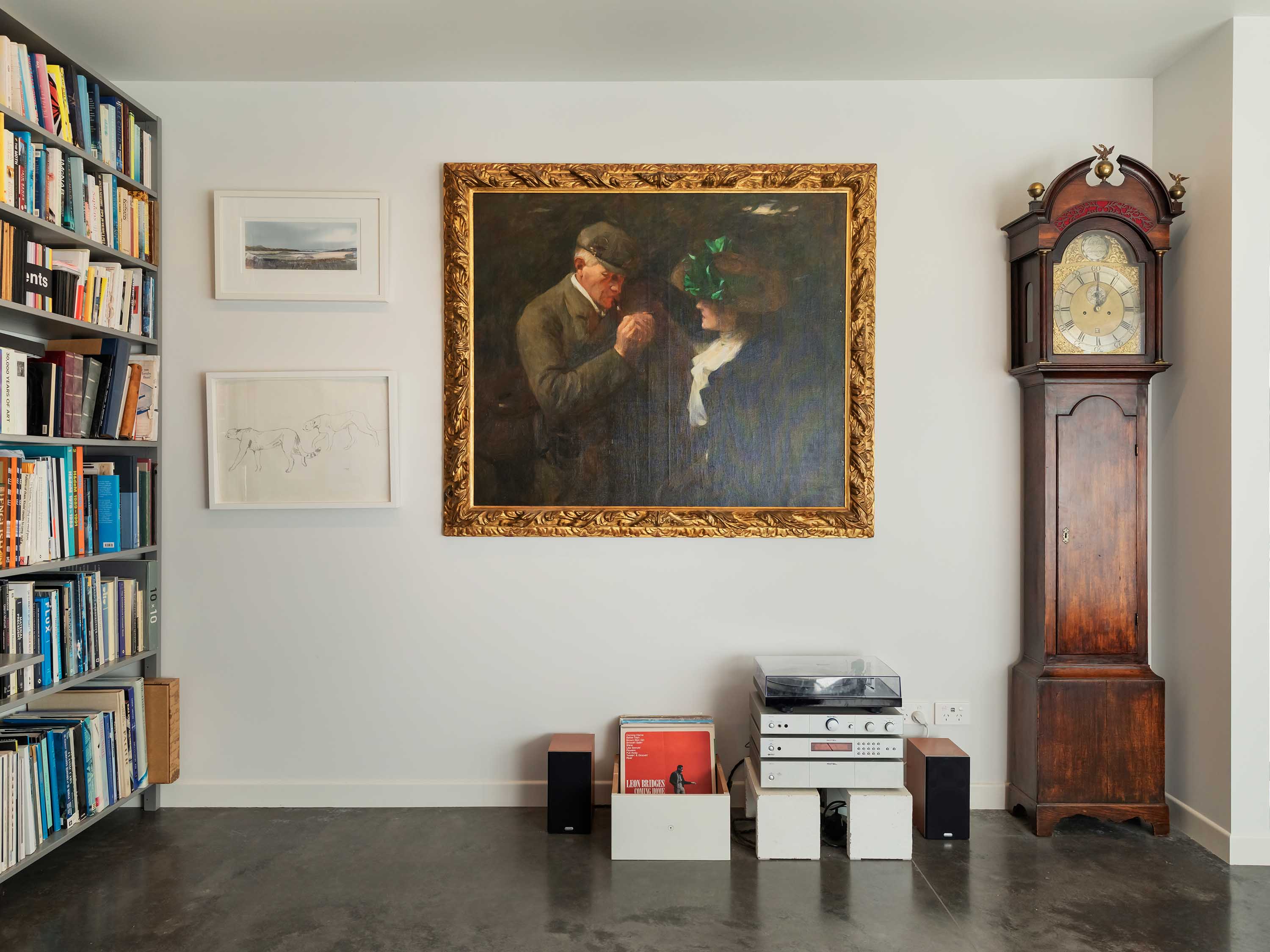 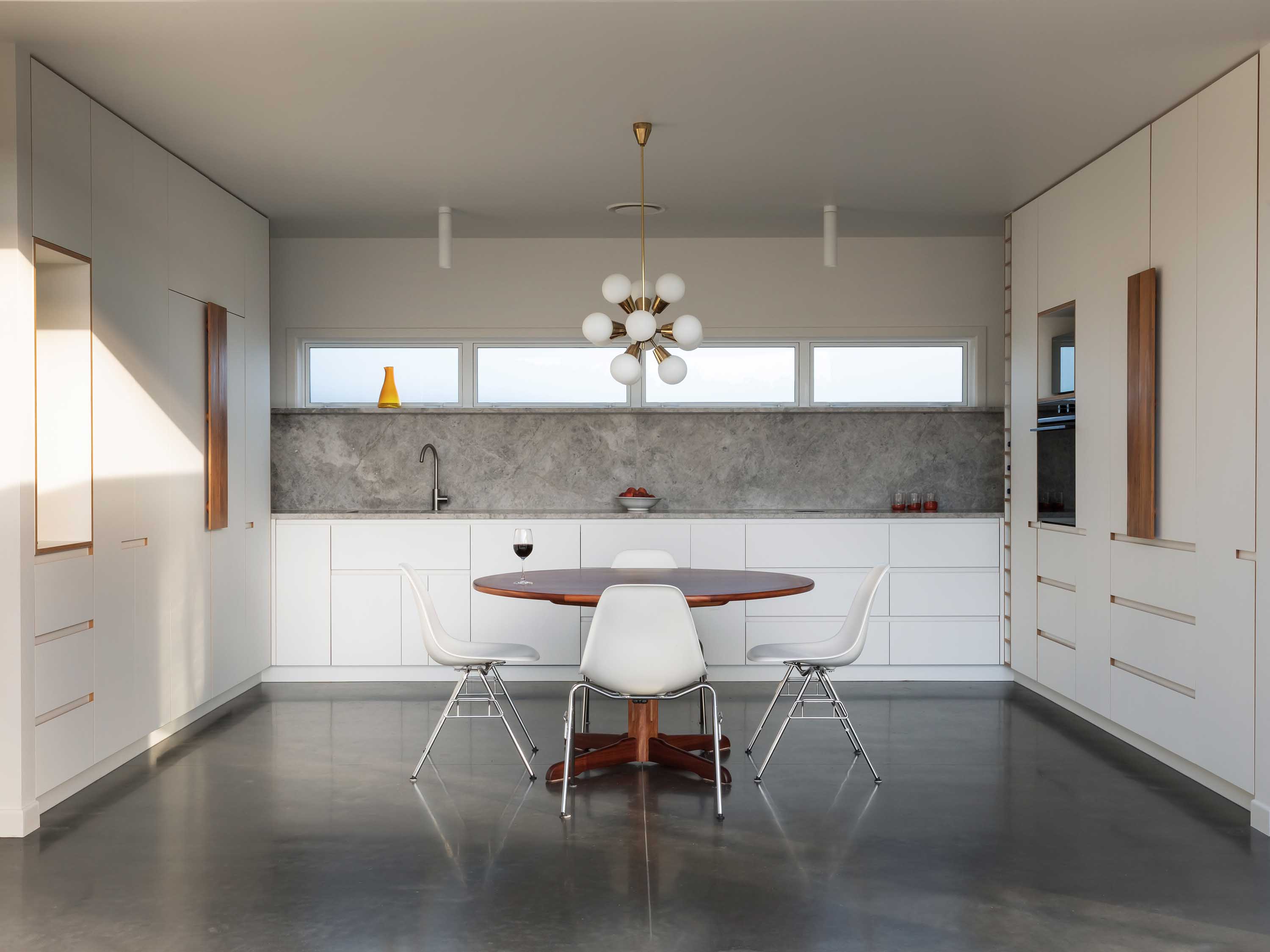 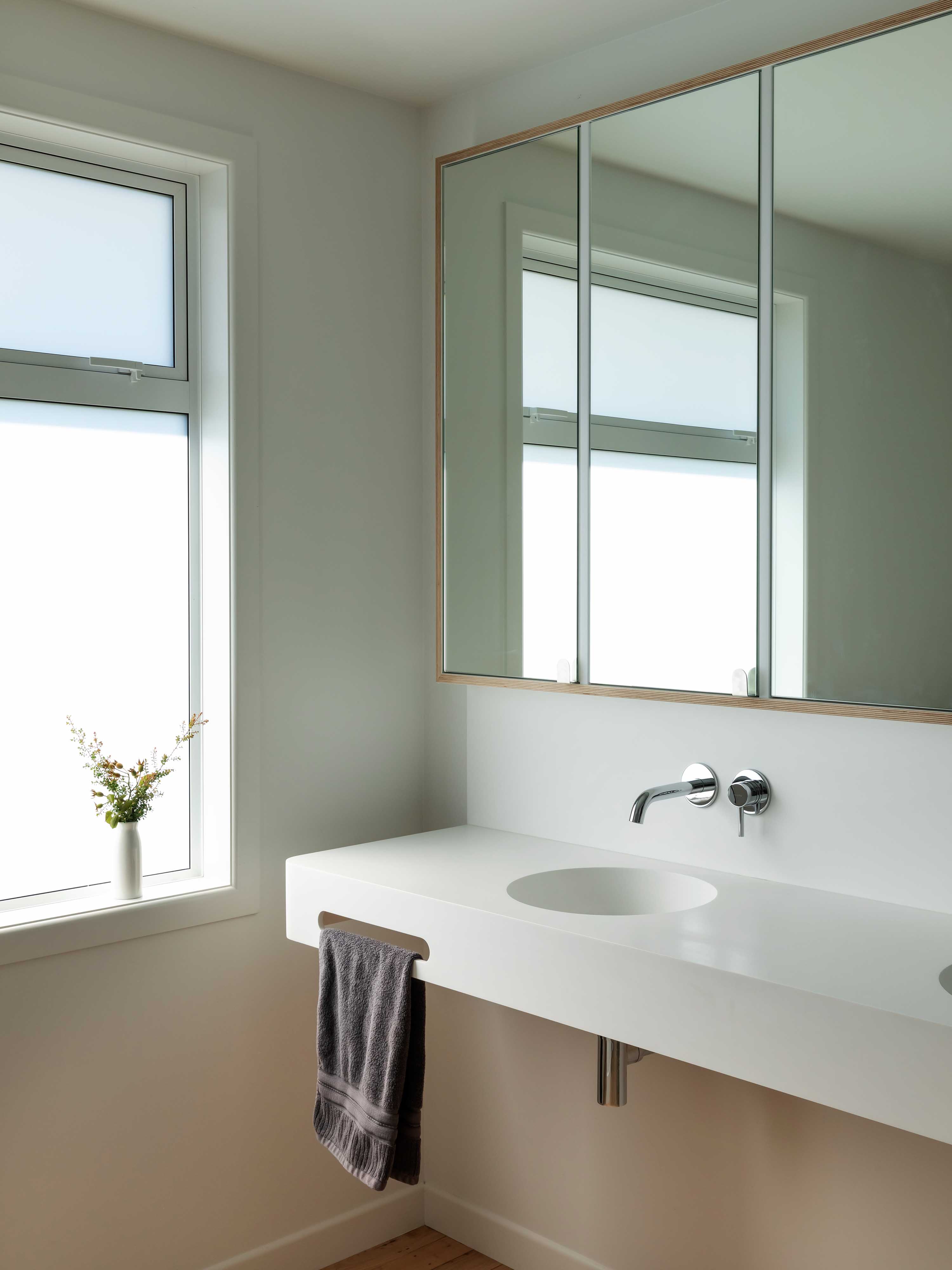 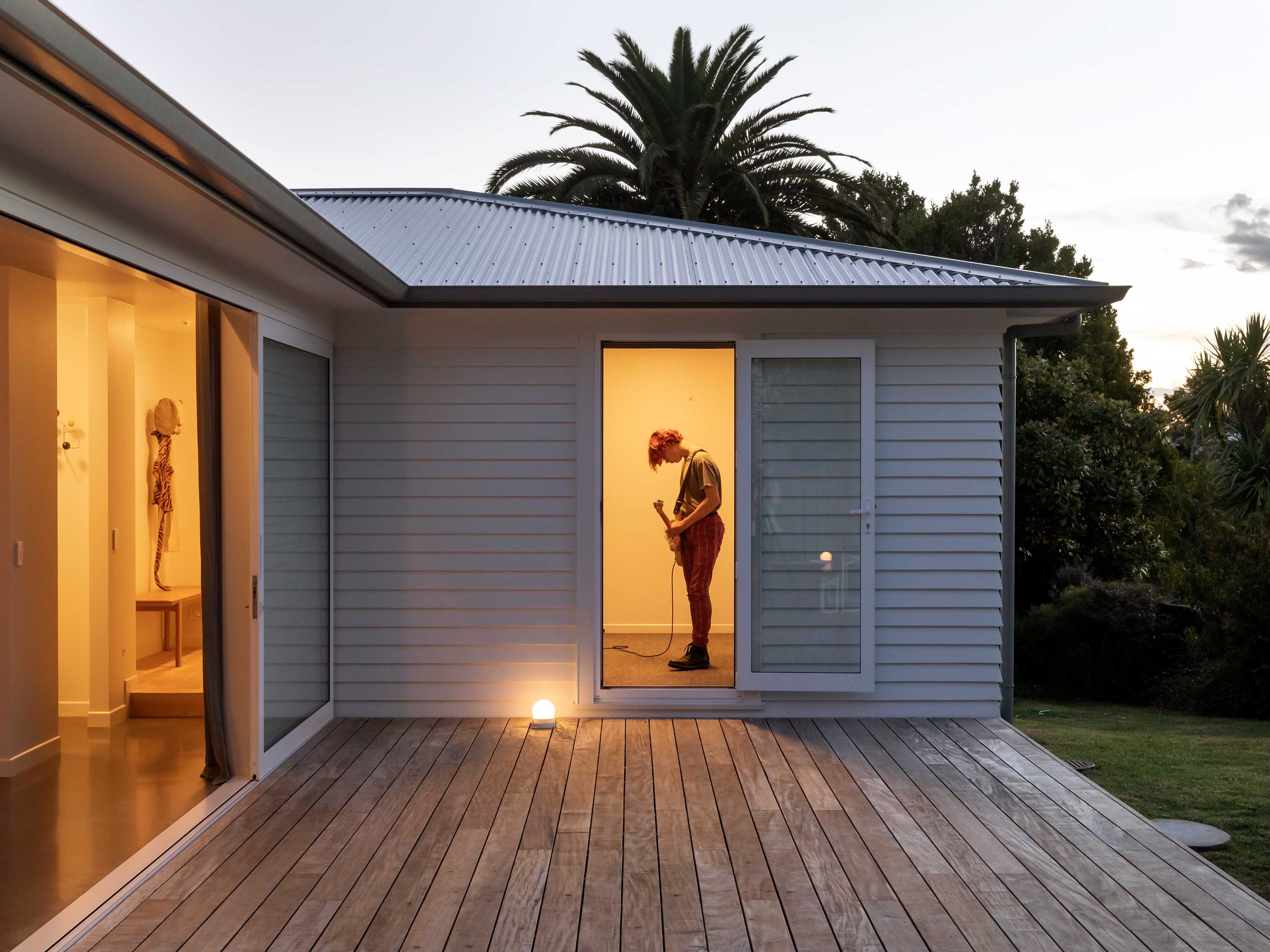 Mike has, he reckons, designed about 16 different schemes for the land here: at one point, they planned to demolish everything and build three new houses – a courtyard house for their family and two small townhouses for sale or rent. None of the plans stacked up financially: Beach Haven might be gentrifying, but its land values are still much lower than other, more central, suburbs. Eventually, he realised that whatever they did, it would need to involve renovating the original house.

Then, around the end of the first lockdown, after six weeks trapped in the house, he sketched a plan. His design kept the existing house in place, adding a long extension which follows the hipped roof and contains a new kitchen, dining space and living area. The original dwelling now houses the bedrooms and bathroom. “The whole thing was about what we could do that was really simple, and really considered,” he says. The new wing is weatherboard outside and painted plasterboard inside, with a polished concrete floor and a flat ceiling, though higher than standard.

As the build approached, Mike started to worry he hadn’t put enough “architecture” into the design. Eventually, his business partner and friend Ben Lloyd pointed out the architecture was in the big moves: orienting the spaces to the north, opening up to the deck, making better use of the site and providing enough bedrooms for the kids. That’s not to say it’s boring – quite the opposite – but the genius here is the plan. In the kitchen, which Mike has called the di-chen, there’s a long kitchen bench with tall cupboards on either side of the room and a round table in the middle, instead of the now-familiar island bench. “As an architect, you have certain ways of solving problems,” says Mike, “but this was a bit different because we didn’t have acres of space to play with. We had this.”

It works on multiple levels. It keeps functions like breakfast inside cupboards, and horizontal surfaces to a minimum. As anyone with young kids knows, island benches inevitably become covered with everything from Lego to school reports: here, the table gets cleaned up most days. And it’s social, a space where everyone can happily hang out. Similarly, the separate living space beyond, complete with a designated area for when Mike works from home, is an unexpected bonus in a small house – and a place for adults to retreat when the kids are squabbling over doing the dishes. “I think it’s good for everyone in the house to have a space to withdraw to,” says Mike. “But sometimes we make spaces bigger than we need to.”

Inside the original house, the bedrooms are deliberately small – just big enough to “sleep in and sulk in”, says Mike – and there’s only one bathroom, though he did slip in an extra toilet. Each bedroom has its own colour, chosen by the kids (with a little guidance, Mike admits), which features on the ceiling and door. The door handles are made from weatherboards pulled off the back of the house. But there is also a small room for the kids, named by Sarah as the “room of requirement”. It’s been there through every iteration: a room for music practice, homework or just hanging out – and crucially, it’s within cooee of the kitchen so Mike and Sarah can keep an eye on everyone. “I’ve always admired the plans of the Group,” says Mike. “They always had small bedrooms and a playroom.”

Mike kept everything simple – a play between bespoke and off-the-shelf. It’s a principle he describes as “the luxury of enough”. He honed in on the details, changing out brass taps for chrome, say, or choosing standard fittings in the bathroom, including a – gasp – plastic shower liner taken to full-height, with a custom steel shelf and a full-height glass door. “I love tiled showers,” says Mike. “I want a tiled shower. I will have one at some point in my life. Right now isn’t that time – and you know what? It’s pretty good.”

One day, Mike will design something new for the front of the section – a couple of small houses perhaps, or a tower for Sarah and him, leaving the original house for someone else in the family. Until then, they now have a room for each child, plenty of living space, and a new connection with the outdoors and their neighbours – it is the true luxury of enough. “There wasn’t a day during the lockdown last year,” says Mike, “where we didn’t look at each other and say, ‘Zoiks, we’re glad we did this.’” 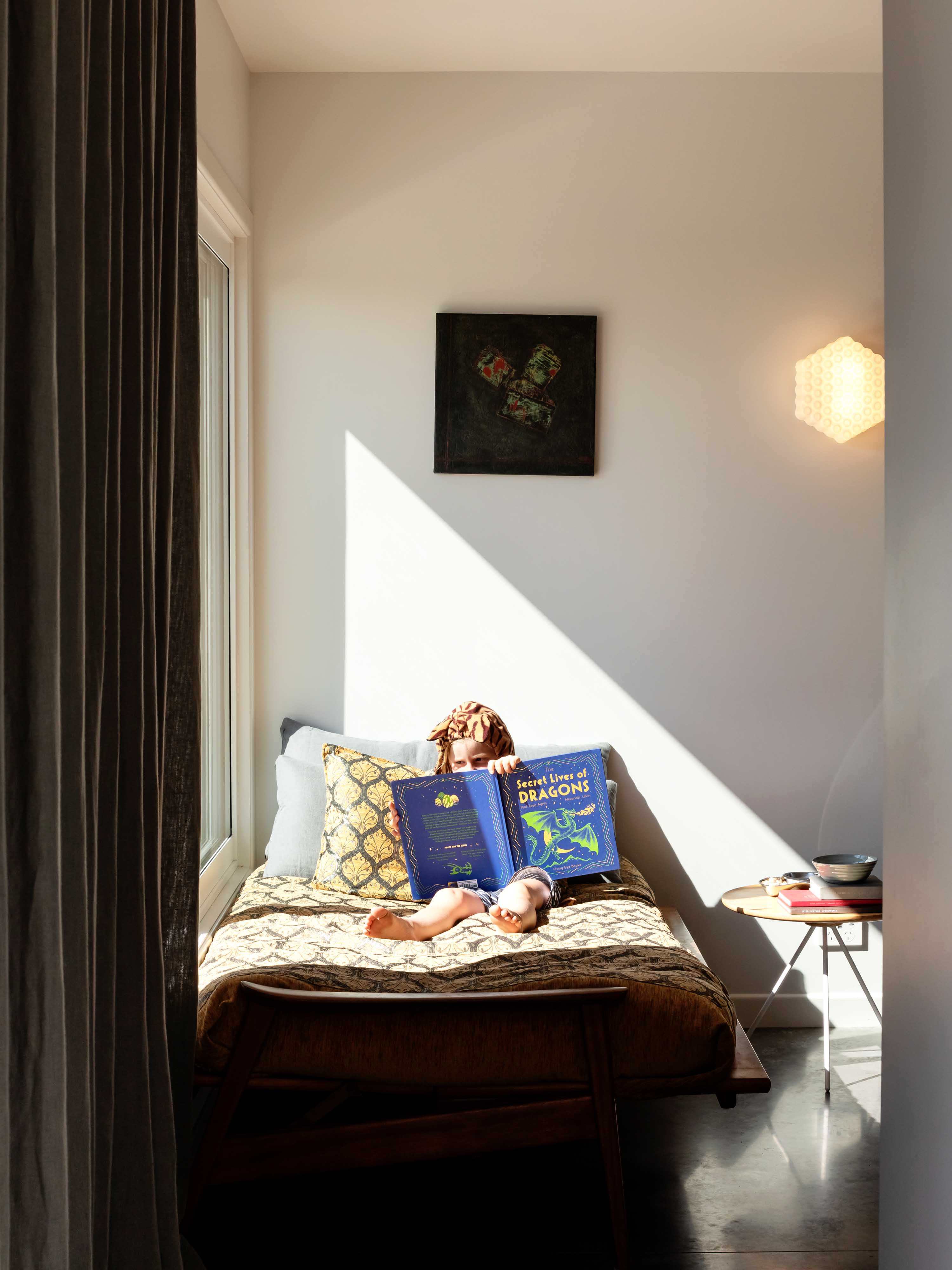 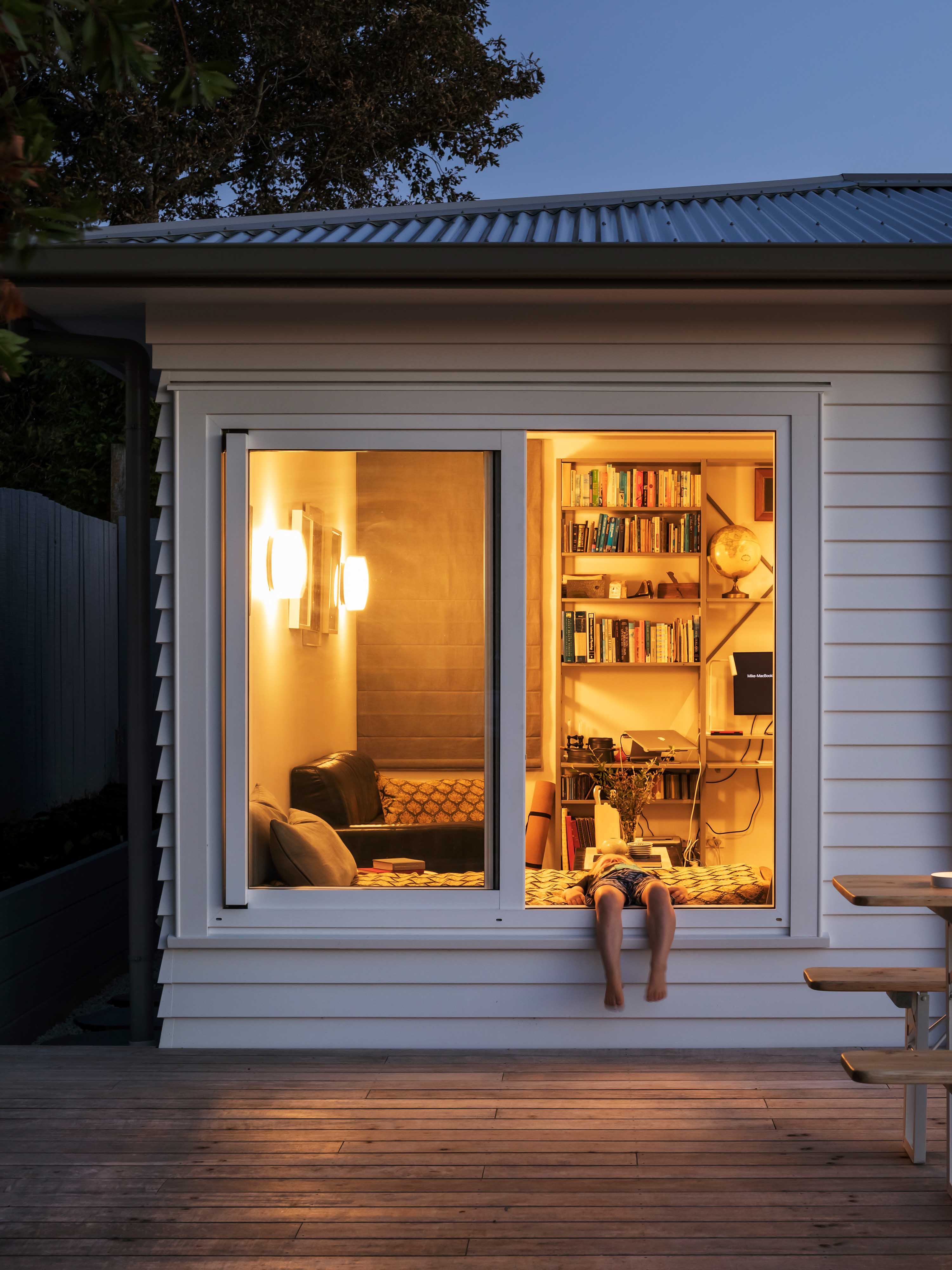 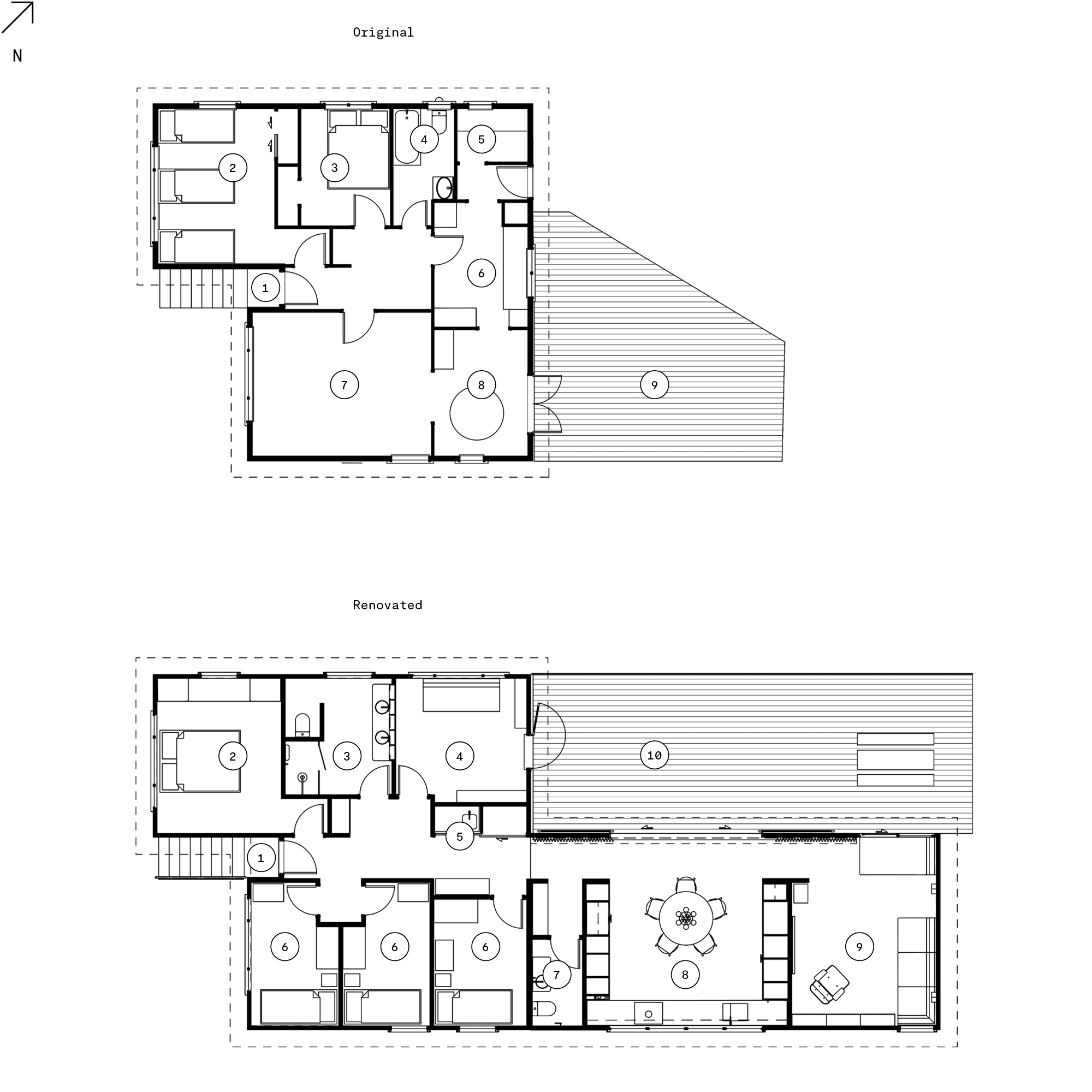 Renovation
Colour
This story is from Issue
13
Print EditionBuy Now