A young couple overcomes a vertiginous site and tiny budget with care, craft and courage. 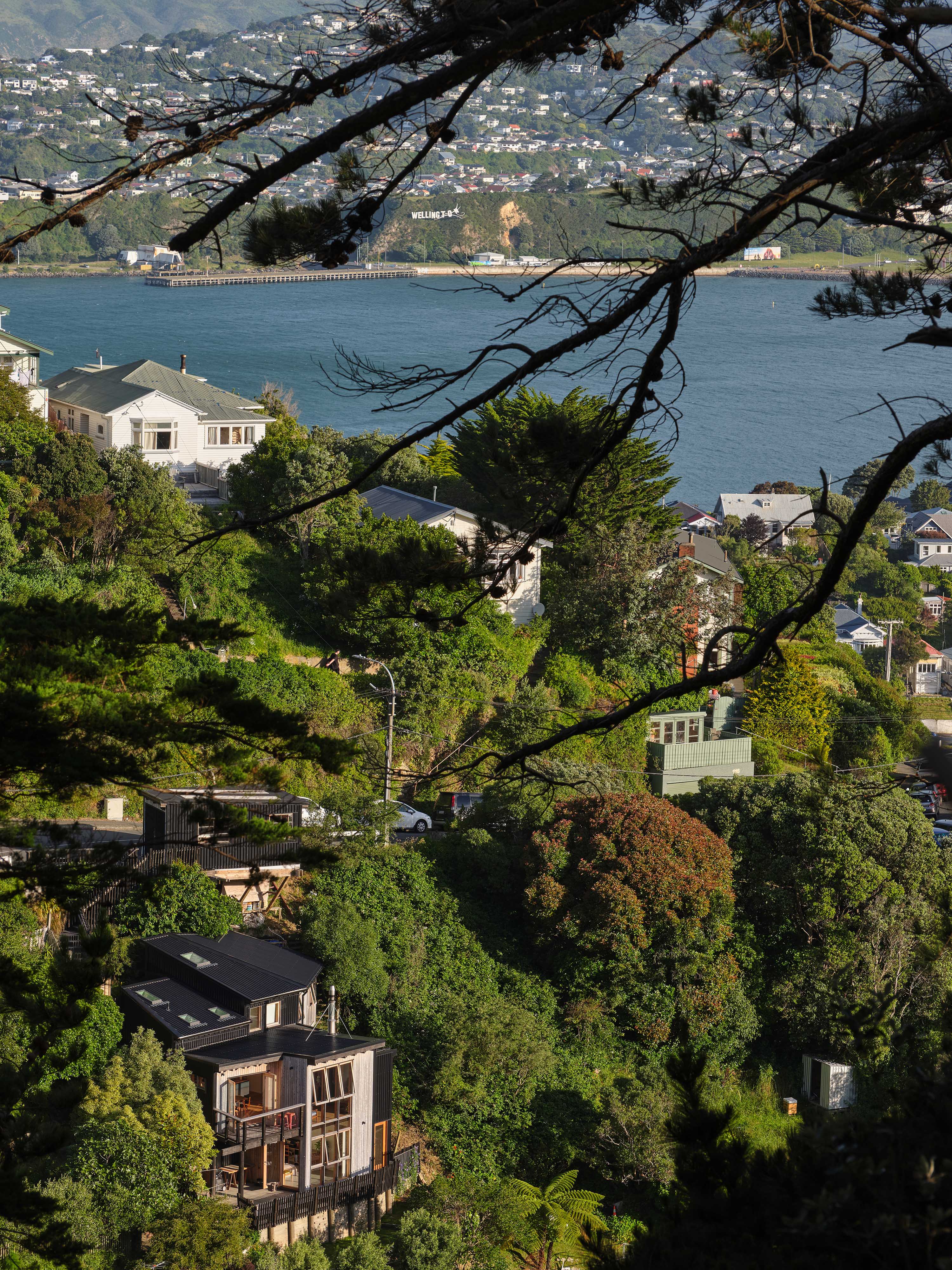 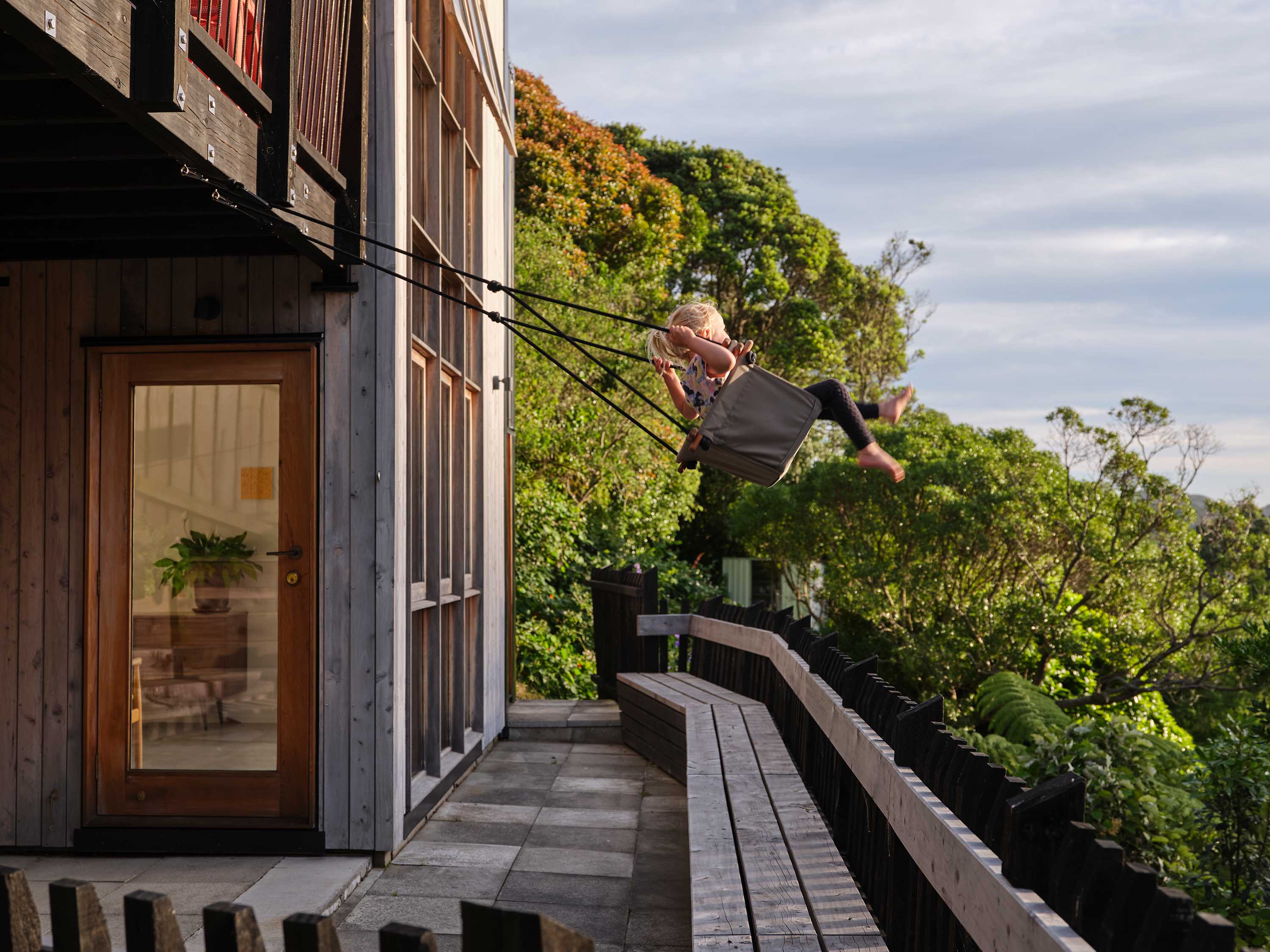 Tim Wernham and Tara Brady had all but given up hope of finding land in central Wellington when they came across a small section in Hataitai that seemed too good to be true. “All the sites we were looking at were steep and covered with trees,” says Brady, of the search. Most, says Wernham, were “basically unbuildable. More than one real-estate agent told us that we could have views, access or sun – pick one.”

Still, they were intrigued by the long, skinny 240-square-metre site, which had been sliced off the back of a larger section. The owner had subdivided and intended to build, but – to Wernham and Brady’s advantage – decided against it. “We looked on Google Maps and it didn’t seem right,” says Wernham. Why was something so good on paper so bloody cheap, they wondered.

So they went to see it – more to discount it, than anything else. When they got there, they instantly fell for it. Steepness aside, it had access, sun – and a fabulous view out to the town belt, a reserve of regenerating, bird-filled bush covered in pōhutukawa. It was summer, they sat on the grassy bank and looked out at the trees. The birds were singing and they couldn’t hear the city. “It was incredible,’” says Wernham.

It’s possible only a builder-turned architectural designer and a jeweller would have that reaction. Did I mention it is very steep as well as narrow? In essence, the site is 12 metres wide and sits on a 45-degree slope. An almost impossible space squeezed against the hill on which to build, and which meant earthworks.

Did I also mention the couple’s minimal budget? Wernham, of Constructive Architecture, was a student at the time and intended to take a year off studying to build it, and Brady is a jeweller. They had less money to build their house than most people would spend on a standard renovation. “There was no wriggle room,” says Brady. “Quite often it was the choice between this cheapest thing, and this other cheapest thing.”

With a neighbour signing off on the house breaching recession planes, Wernham began designing and conceived a way of building to minimise earthworks and retaining walls. The house rises up from a small building platform at the bottom of the site, over a series of benched cuts into the hill; it sits on a concrete pad at the base and piles above. Still, the excavation costs would take up a third of their budget.

With structure, shape and size (100 square metres) in place, the next decision was circulation. “That’s the key with a small space, not taking too much room,” says Wernham. “That’s why it staggers down like leaves on a tree.” 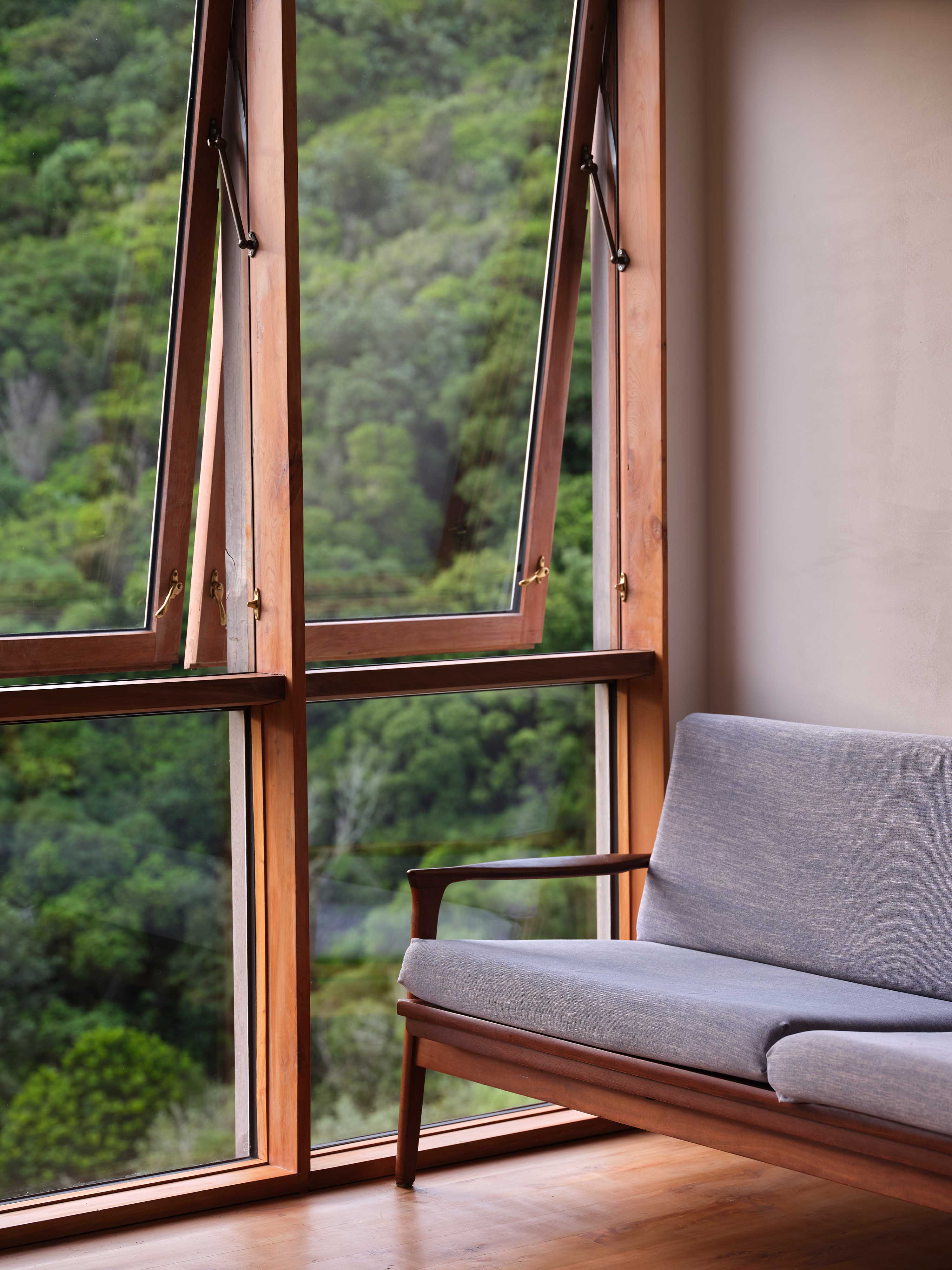 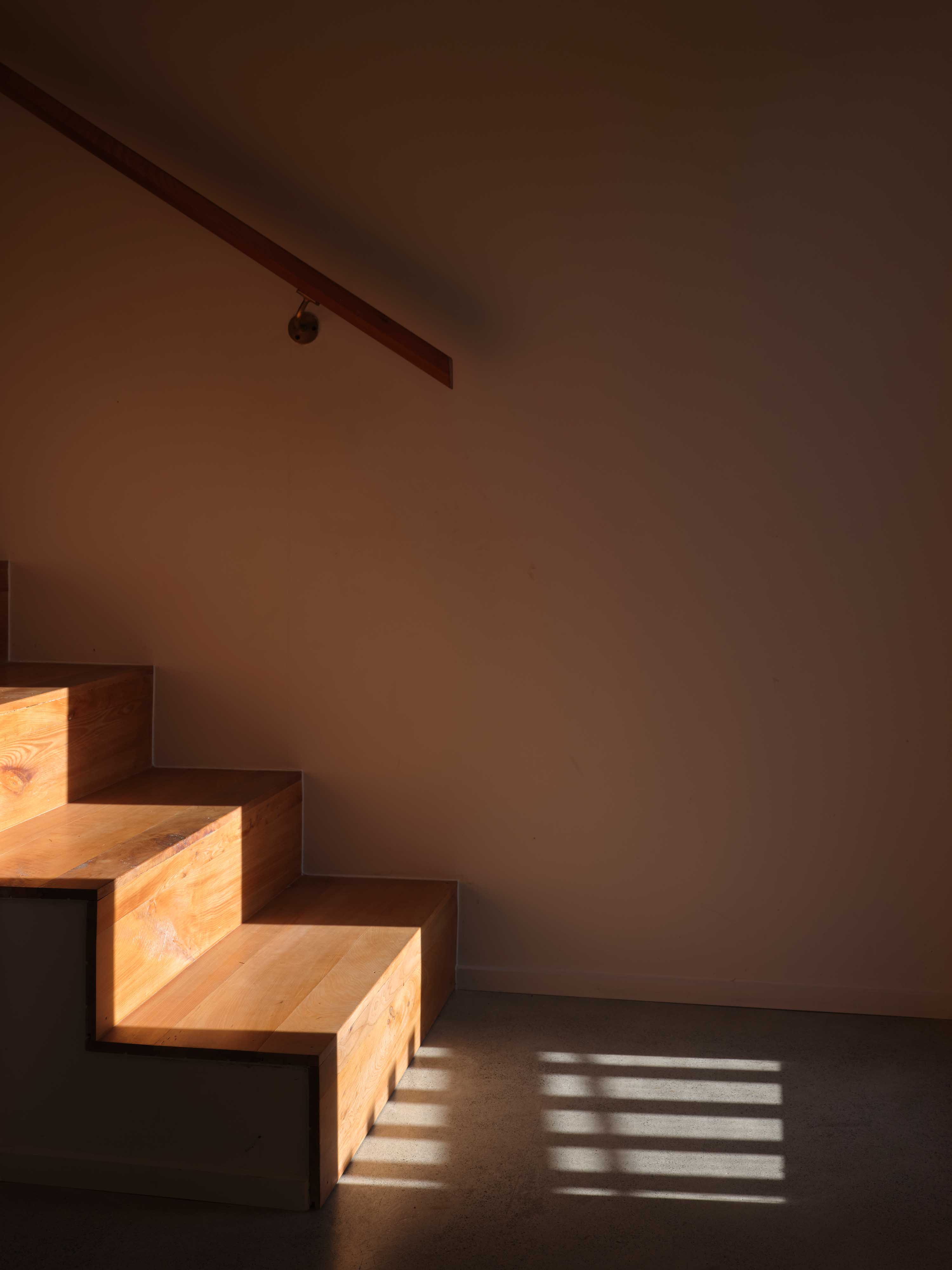 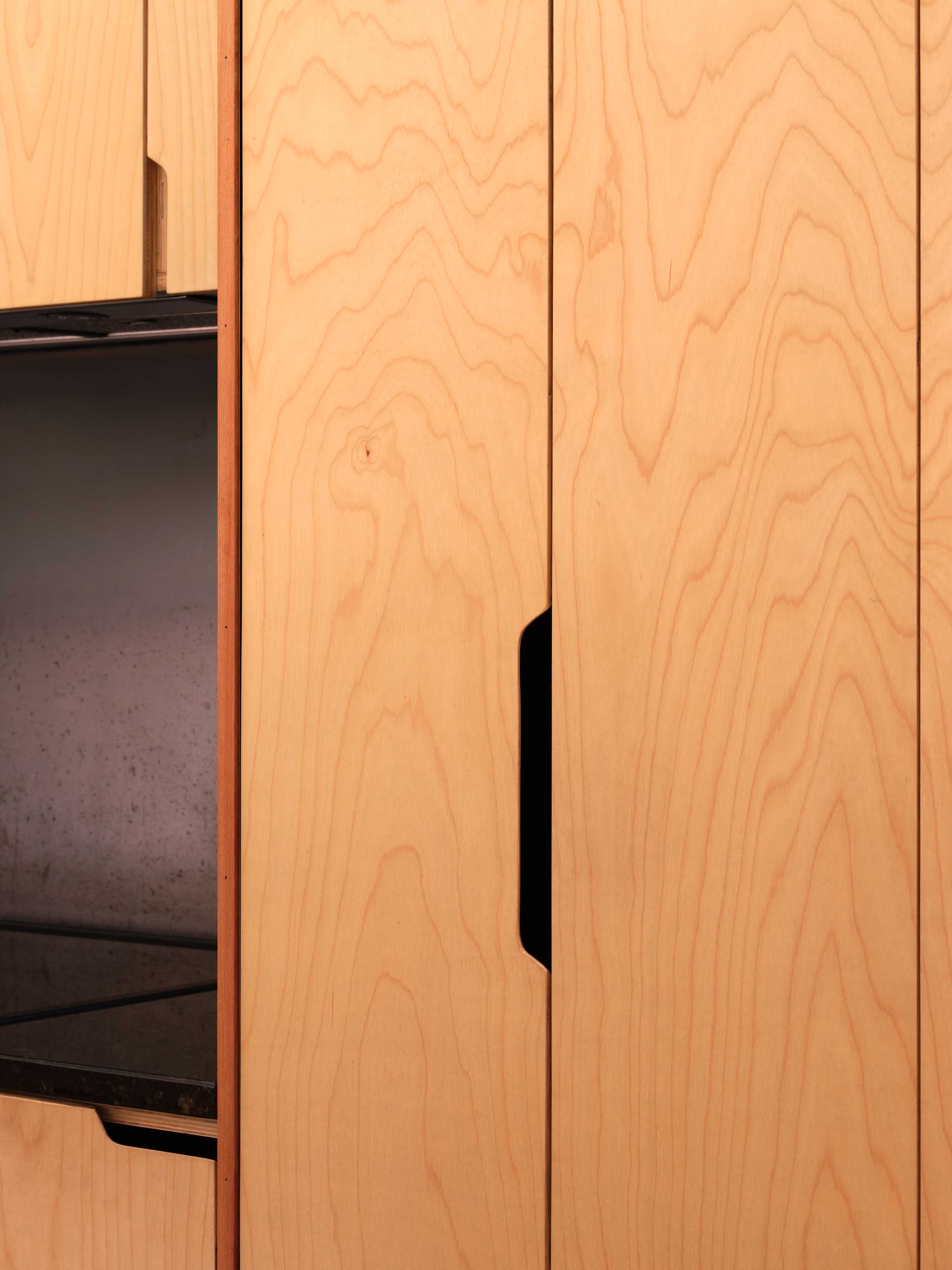 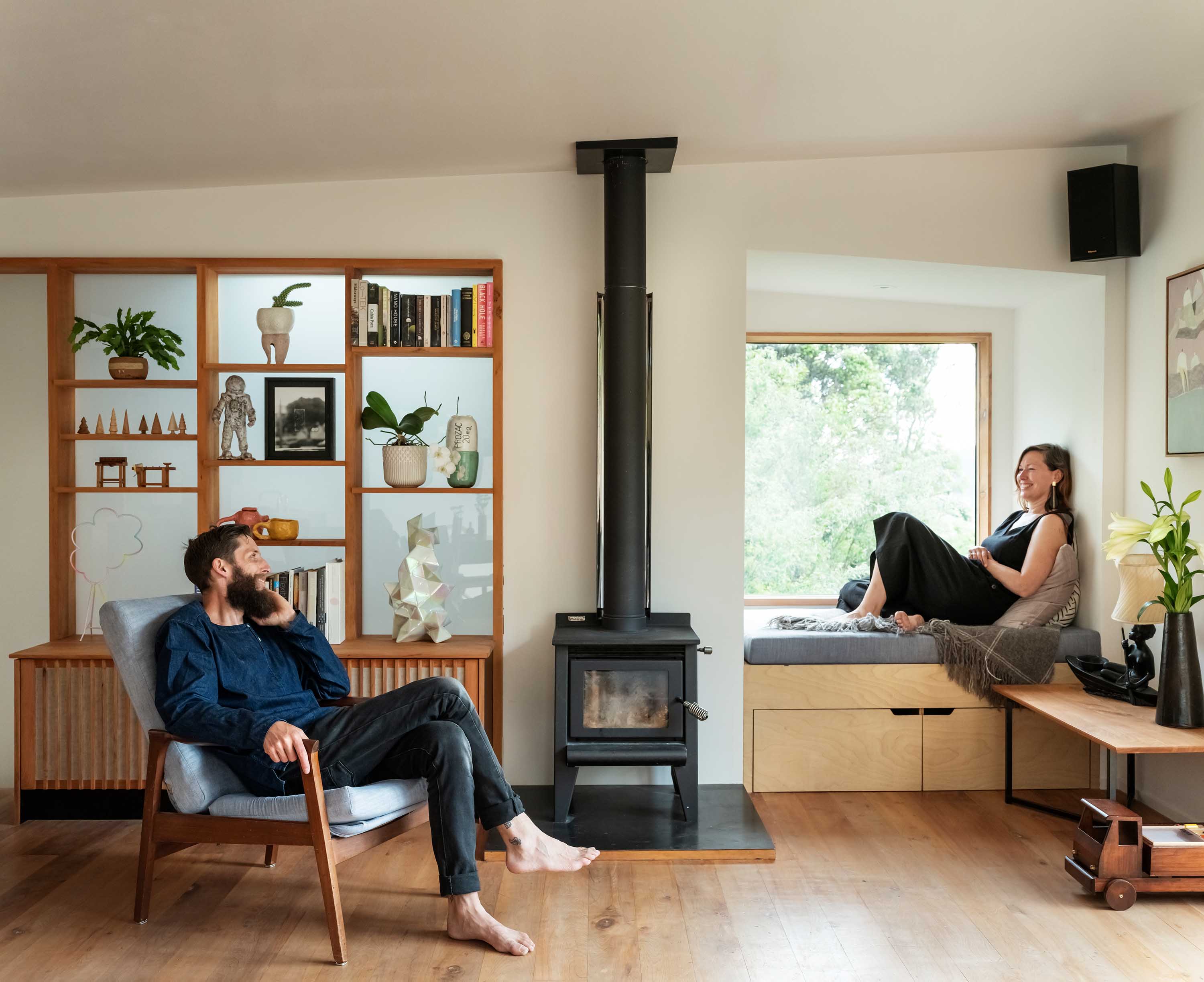 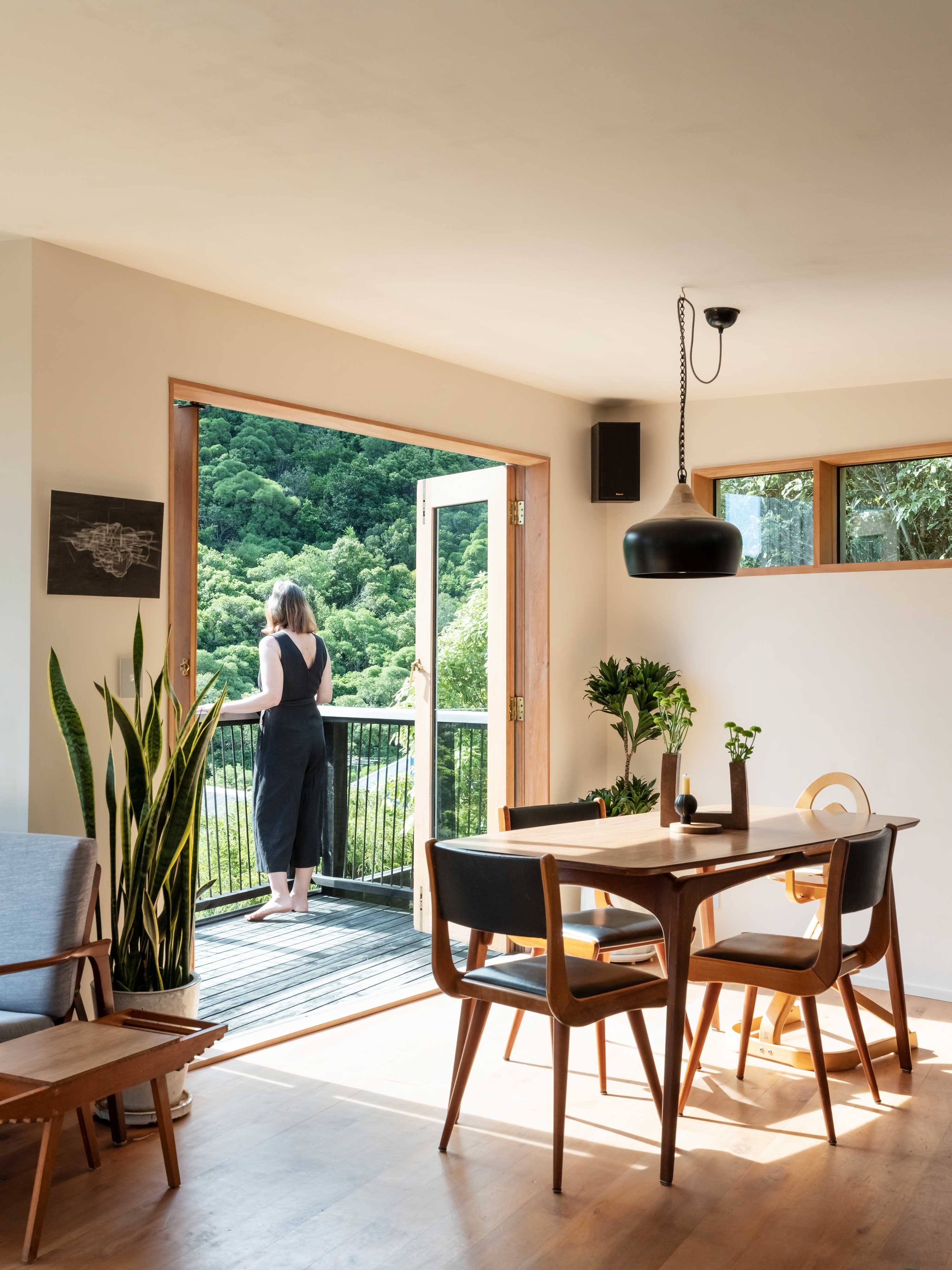 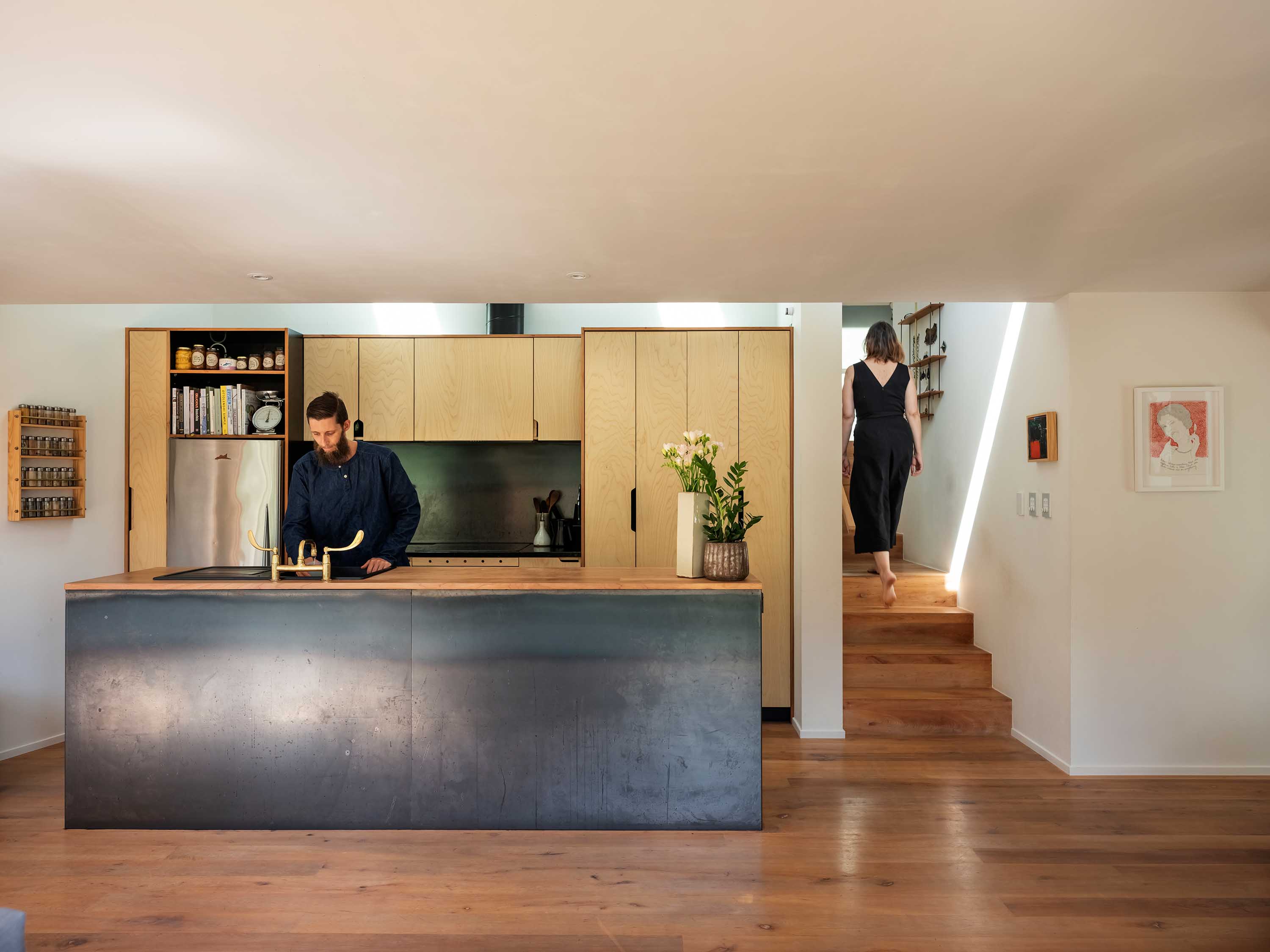 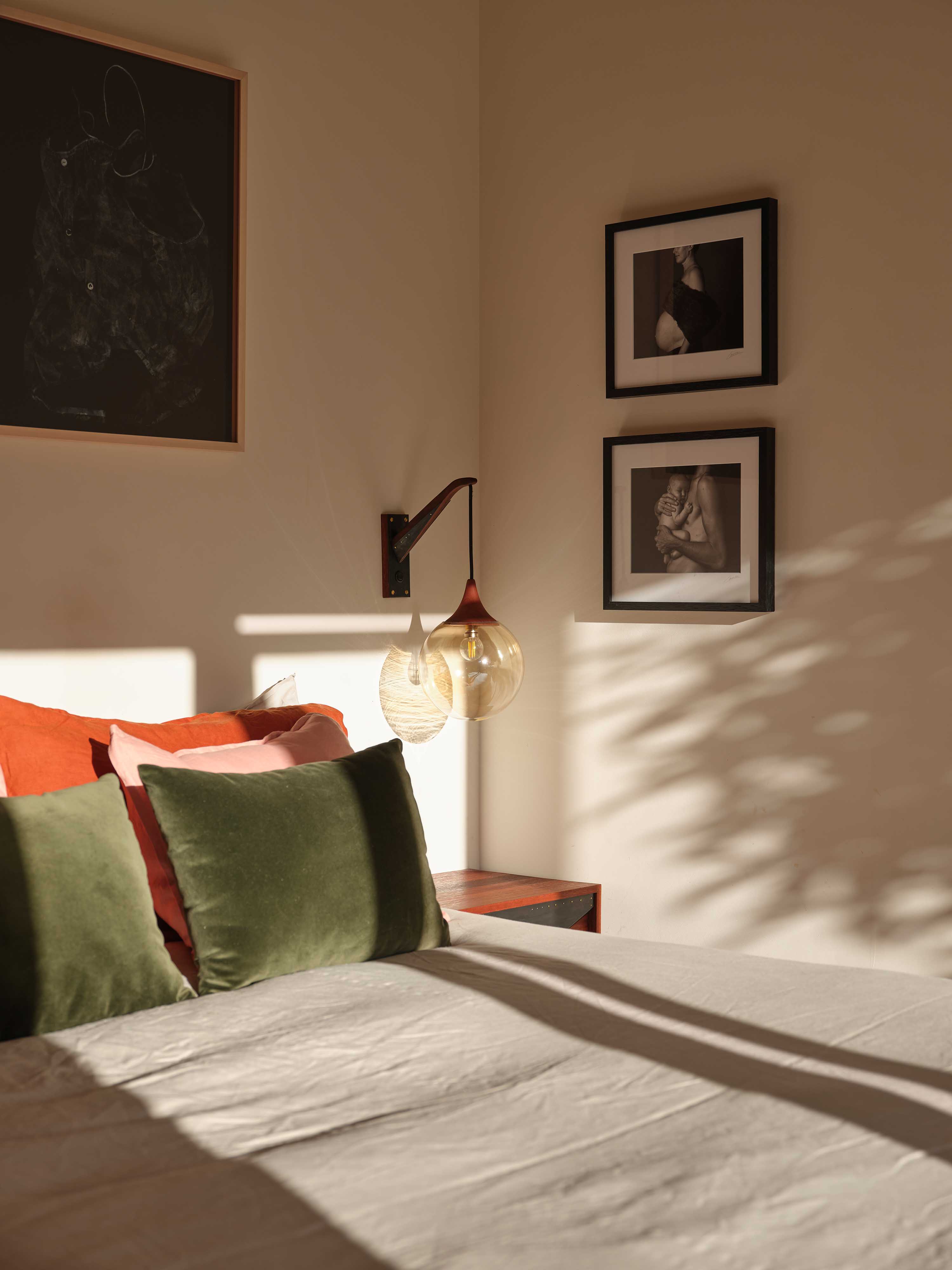 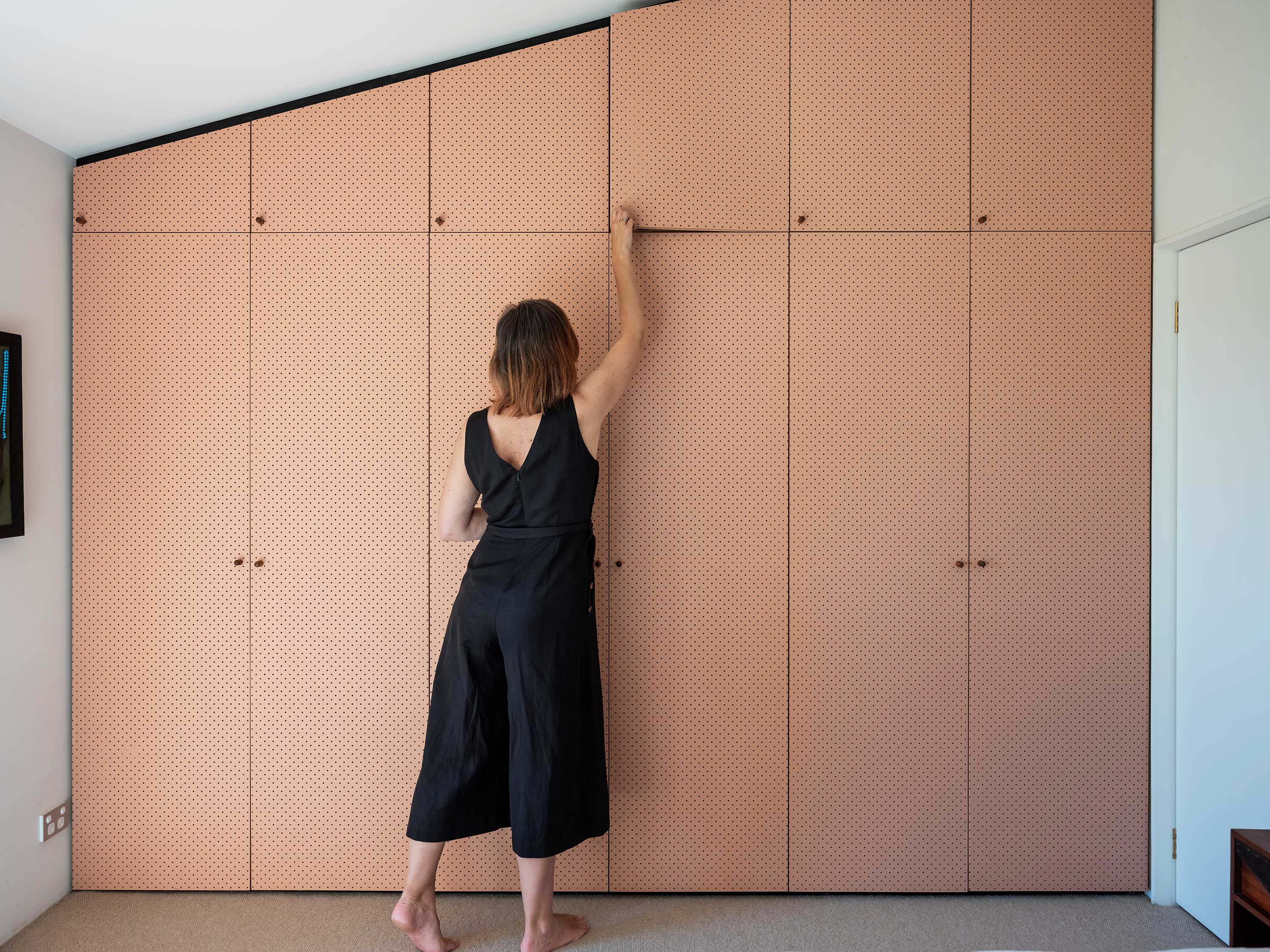 At street level, you arrive to a parking pad with a small garage, which doubles as a workshop and studio. You turn right and walk down a full storey to reach the entry, which is sheltered by a poured concrete wall holding up the hill. There are two bedrooms at this level; down a half level is the bathroom; and you descend another flight to the main living area. Below that is another bedroom and the laundry. You are constantly aware of the hill, of working your way down the slope and across the topography. As you walk, you can read where the hill starts to get really steep.

Key to the programme is the elevated living area, which is a lovely space at the heart of the house. The couple wanted the view that captivated them at first sight, the one they enjoyed while sitting in the long grass in the sun. The ceiling starts high and telescopes down to a mullioned timber window that runs down the entire façade of the house and frames the view. “We liked the idea that the house would push you out into the bush,” says Wernham. “It pulls down and closes a bit to focus on the view.”

Plans made and consents gained, Wernham spent a year building the house. With Brady’s help, they built almost the entire thing themselves. With nowhere else to take it, they carried out a lot of work on the street. They tied steel for the foundations, cut timber and constructed the front window on the living room floor. With a working bee, they lowered the 5 x 2.5-metre frame in one piece, sans glass, over the edge of the living room and out into space. “It was either going to fit, or it wasn’t, and it was either going to break, or it wasn’t,” says Wernham. “It did fit, and it didn’t break.”

The couple spent a lot of time hunting down timber – demolition tōtara for the windows, floors and doors. They clad the exterior in macrocarpa. Their pursuits saved them money and the results lend warmth to the place.

Despite the tiny budget, they spent where it would count, such as above-code wool insulation in the walls and ceiling (Wernham’s father slept on them while working on the house). Instead of energy-intensive plasterboard, they chose Magnum Board – a sustainable, breathable wall lining with a low embodied energy. And they hand-mixed natural paints to their perfect shade of white.

In February 2017 they moved in, with no kitchen and barely a bathroom. A few months later, and while they were still working on the house, Brady found she was pregnant with Sadie, who just turned three – she remembers helping to carry the fireplace in through the bedroom window, having been told not to lift anything.

From there, they took their time to complete the fitout – during lockdown last year, Brady finally finished the cabinetry that sits between the living area and stairwell. Now, Sadie sleeps in a little room tucked next to her parents and friends and family sleep on the ground floor where, one day, they might slip in another bathroom.

Over time, the couple has planted fruit trees and vegetables, softening the steep slope; they can sit in the sun and watch the town belt while kākā swoop overhead. It all contributes to this modest house with heart, one that shows what’s possible. “Money wasn’t on our side, and the site wasn’t on our side,” says Wernham. “But we had time.” 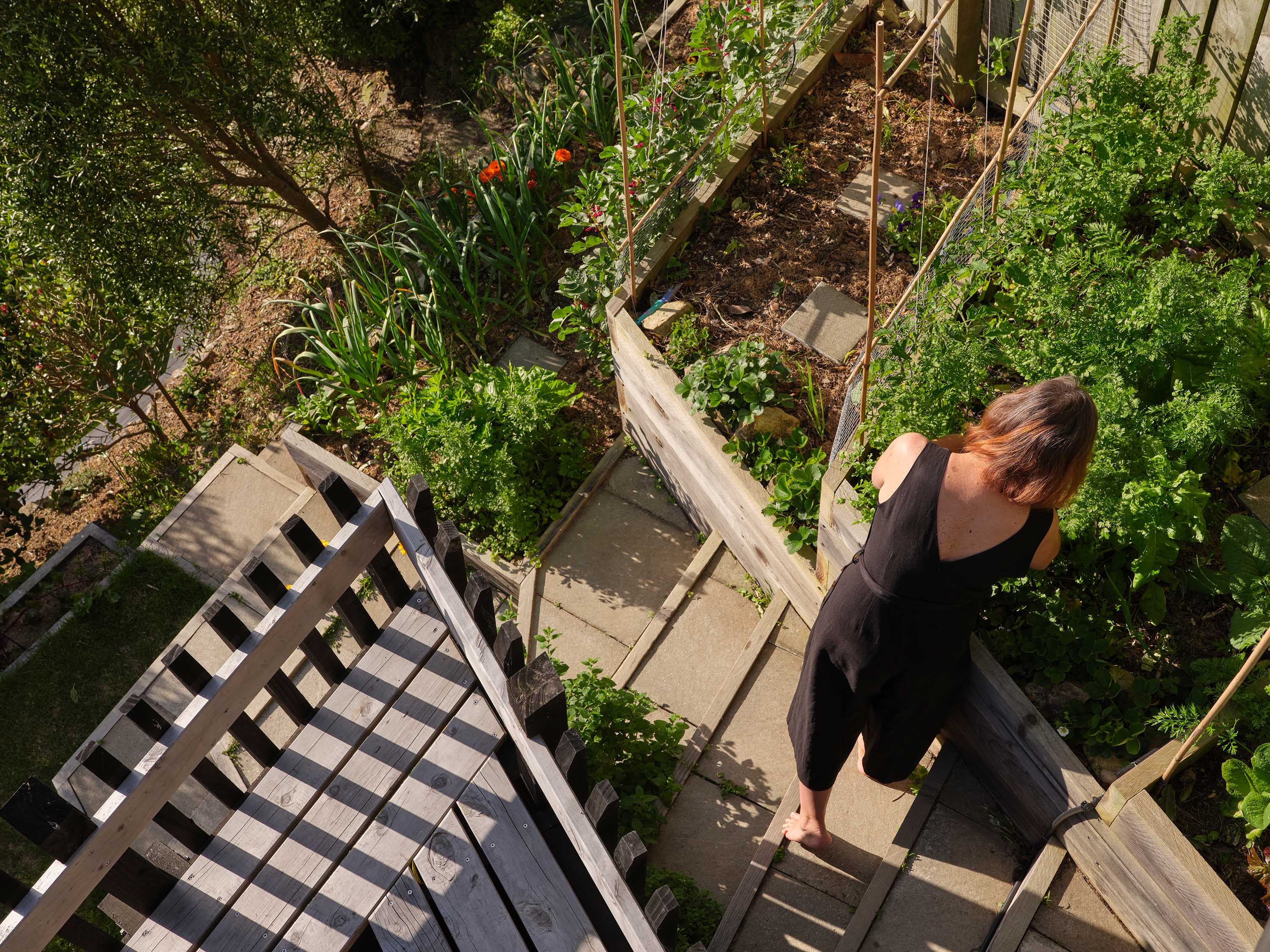 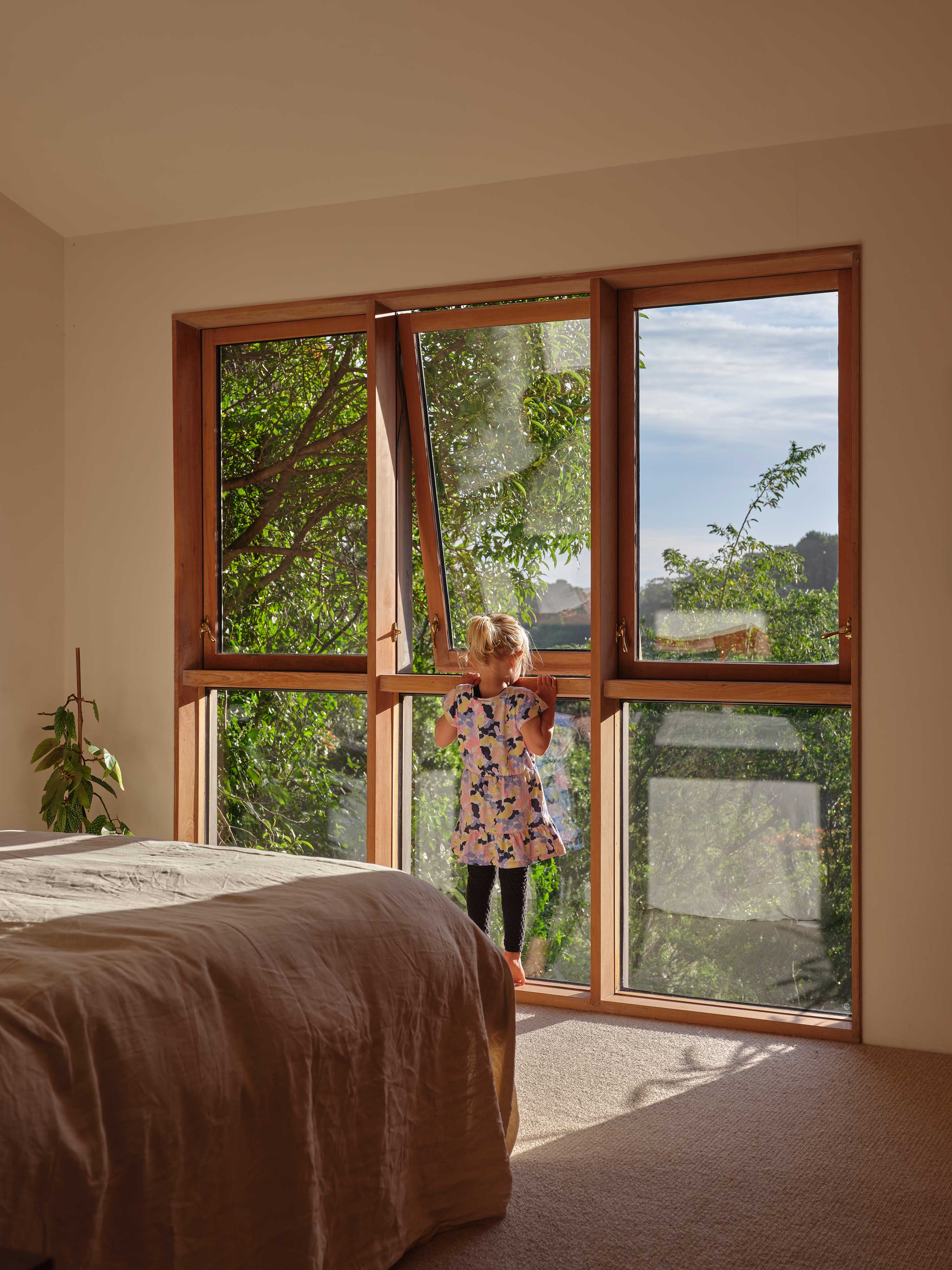 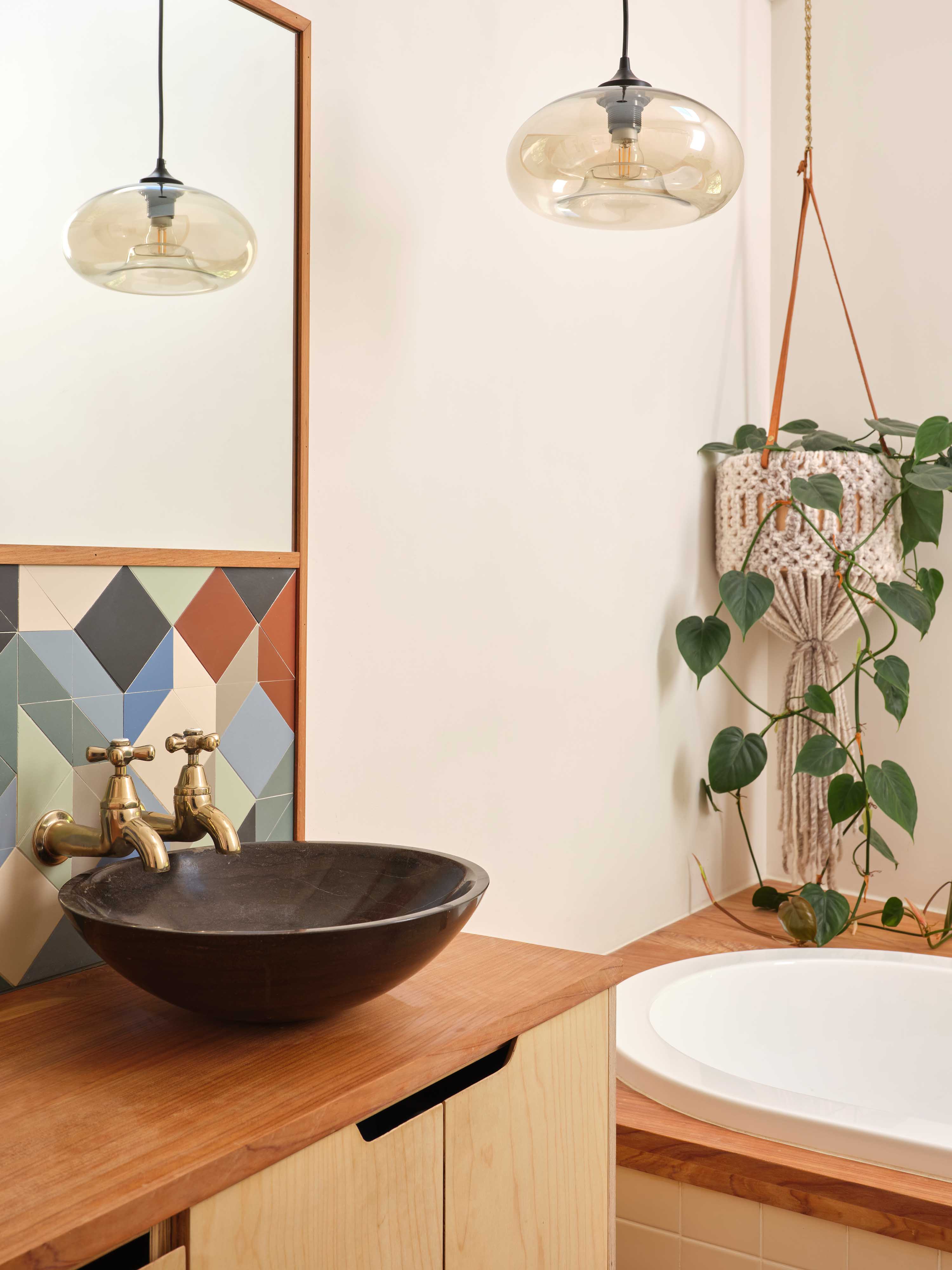 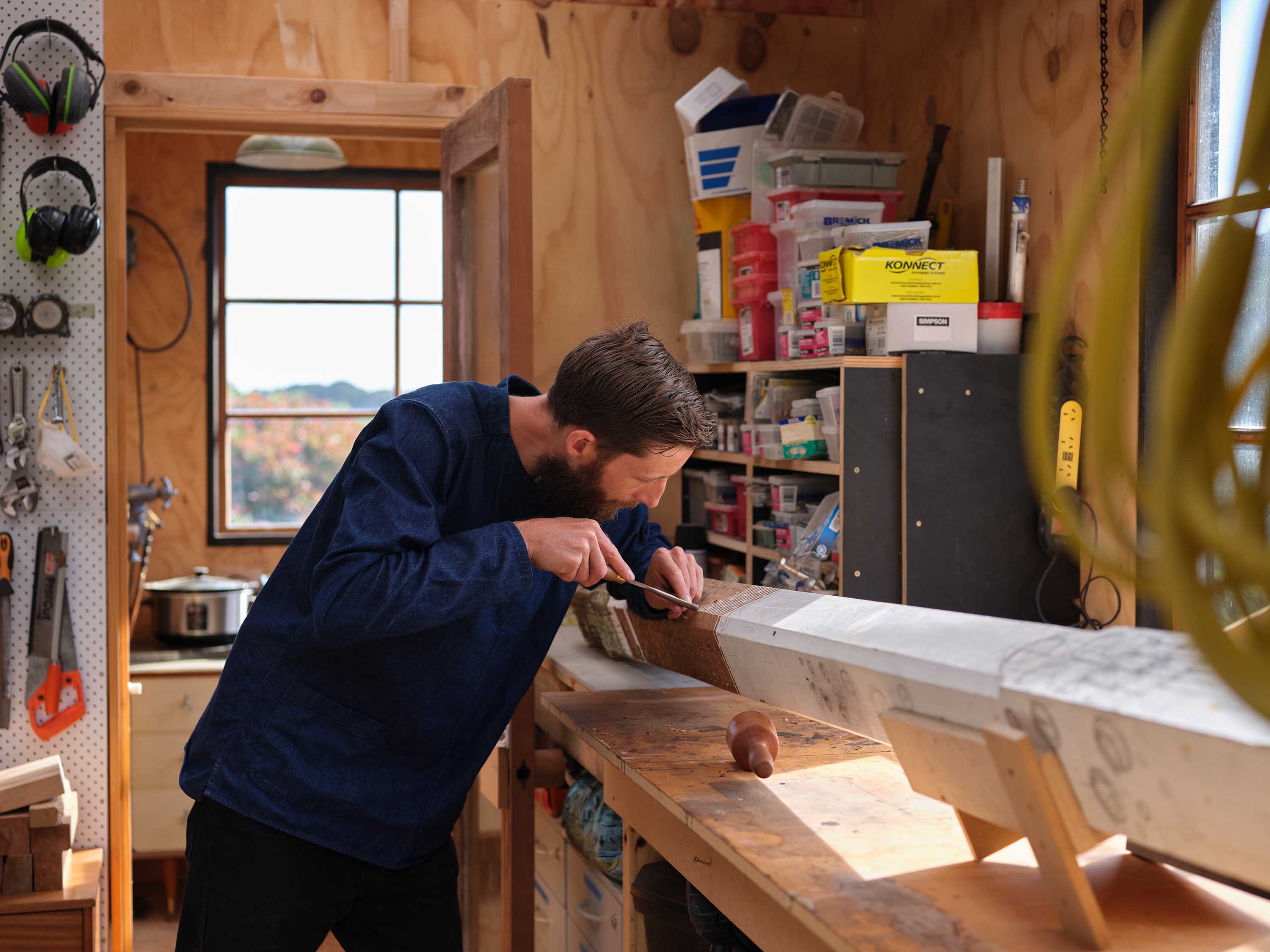 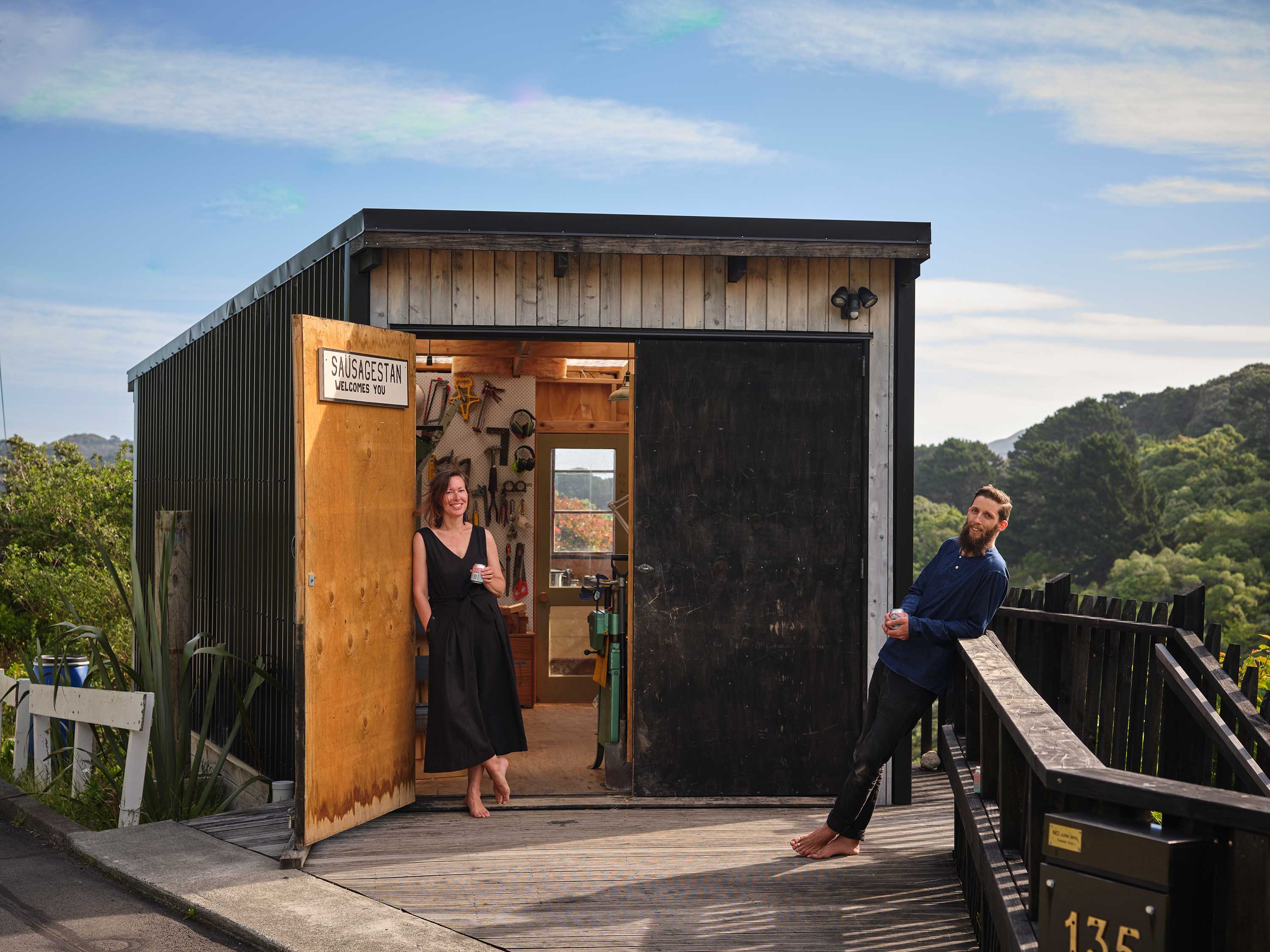 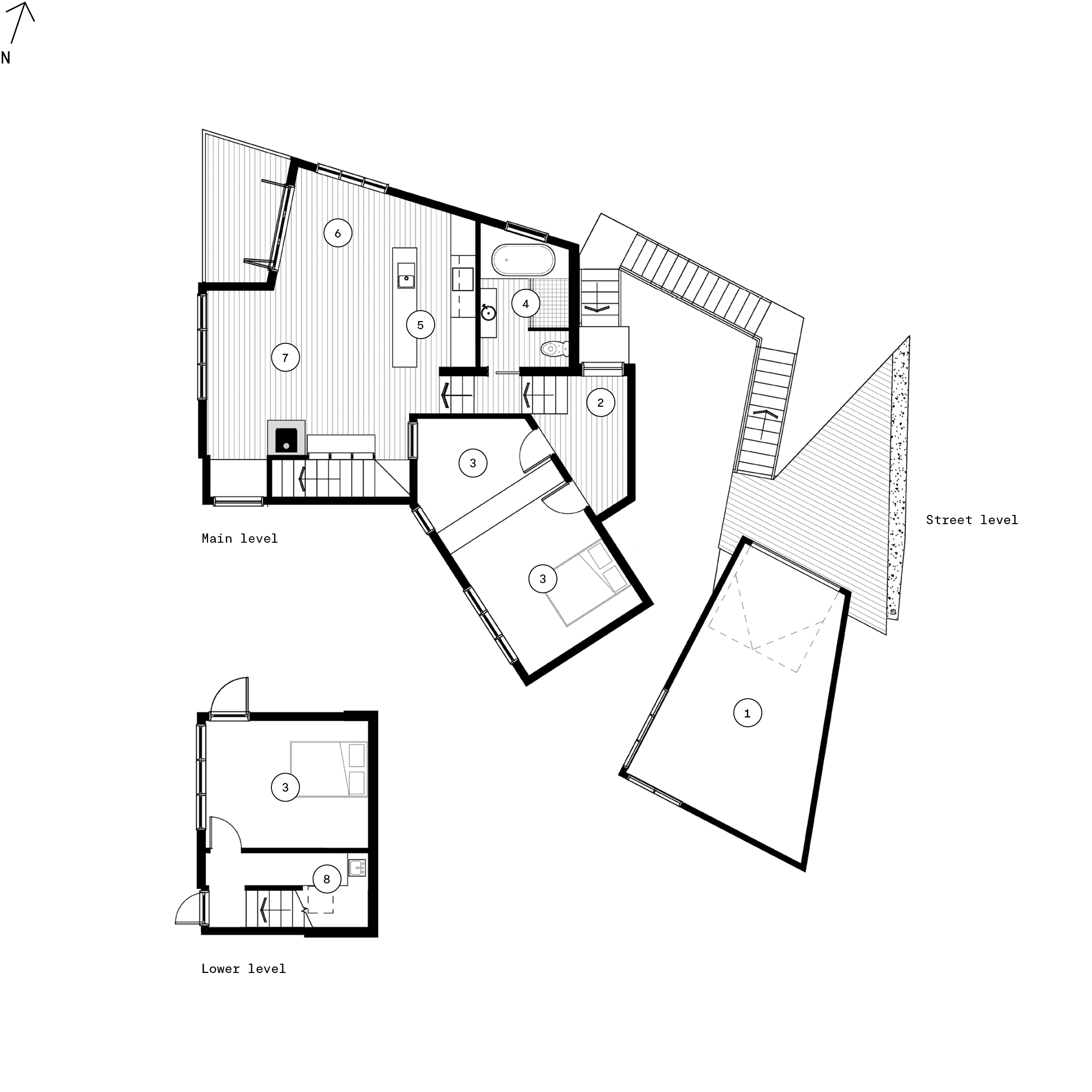