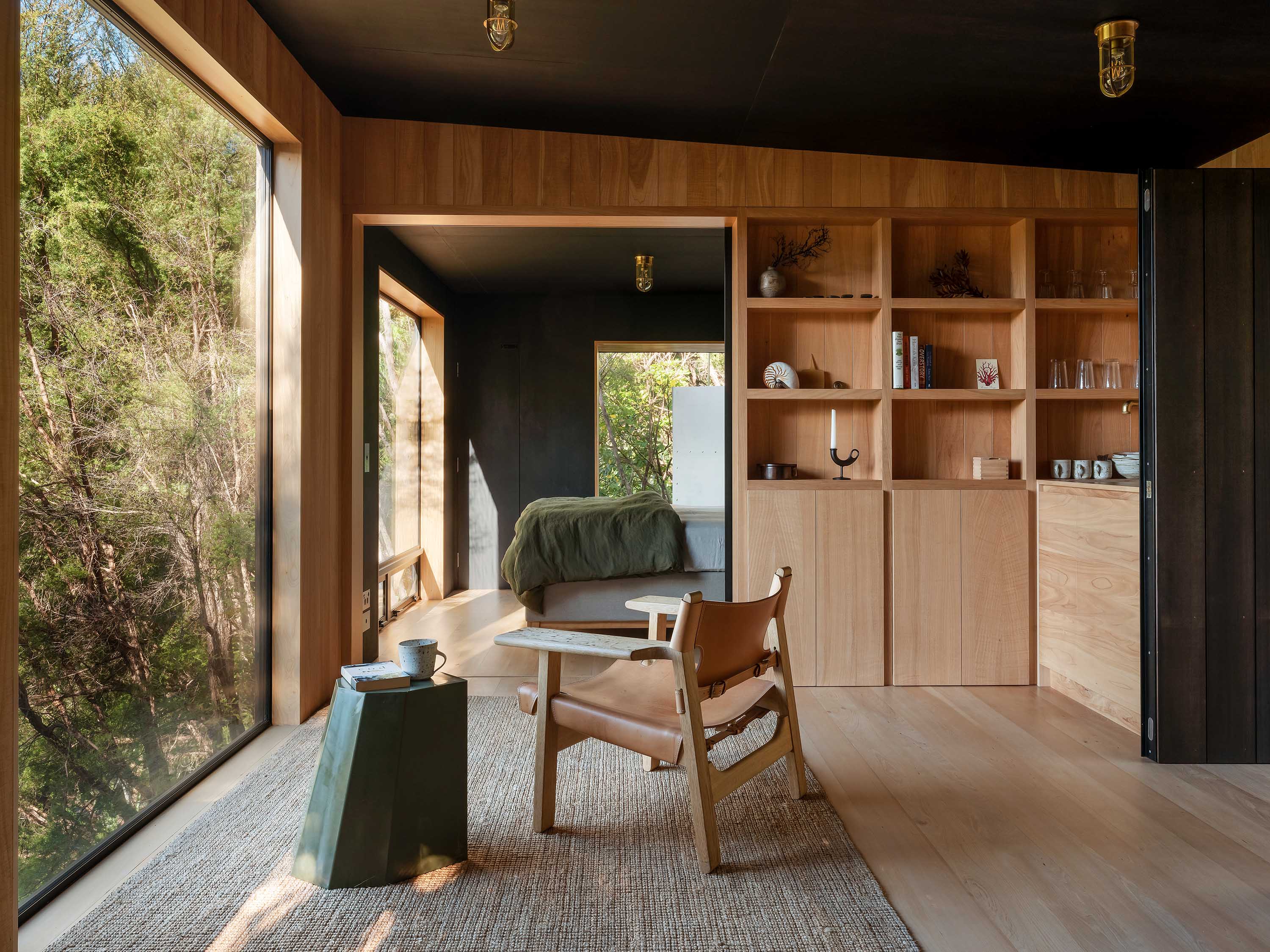 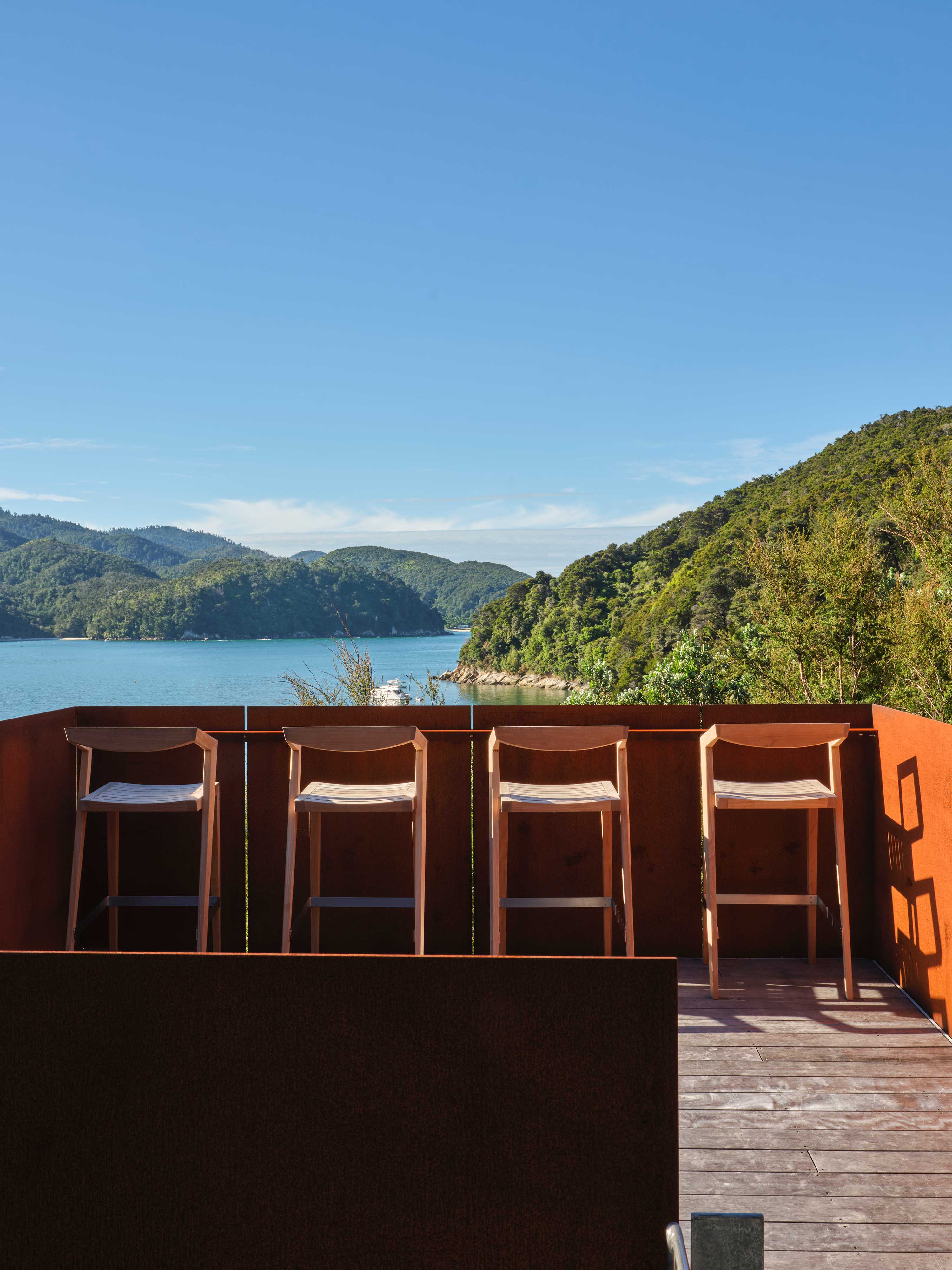 Being part of a large family is a wonderful thing – until it comes time to make sleeping arrangements on holiday. While bunk beds and room sharing suffice temporarily, the walls can begin to close in when grandchildren enter the equation. For the owners of this coastal Tasman property, an ever-expanding family saw their existing holiday home pushed to its limits. “There just wasn’t enough room,” says Prue Johnstone of Johnstone Callaghan Architects. So the couple, who happened to be her parents, formed a unique solution to the space shortage: a cabin in the bush.

“They wanted somewhere they could escape to,” explains Johnstone. The cabin was to serve as a retreat for them or visiting friends. It would also save them the hassle of opening up the main residence on shorter stints to the bay. They already had the perfect site, nestled in the native trees behind the existing home, but knew from experience that building in such peaceful isolation would come at the cost of convenience.

The off-grid property is boat-access only. Bordered by Abel Tasman National Park, it’s traced by golden sand and cloaked in native bush. Approaching the bay, the challenge of exiting an idling tender while keeping your pants dry serves as your official welcome. A short, steep hike then guides you up the hillside to the family holiday home, where you’re rewarded with stretching ocean views. Continue further on, and the cabin is revealed.

Two adjoining boxes hover side by side amongst the kānuka and tree ferns. One is wrapped in Corten steel and the other in Western red cedar, intentionally low-maintenance materials befitting a seasonal holiday destination. Though foreign objects in the bush, their deep tones and natural patina see them settle into the surroundings. Johnstone and co-director Mike Callaghan describe the aesthetic as a “collaboration” with the couple. “They’re really well versed in architecture and design. So they know what they like and, equally, what they don’t,” Johnstone says. Where the primary residence favours the seaside vernacular – whitewashed walls, board and batten exterior and sisal flooring – the cabin was to be a sharp departure in style. 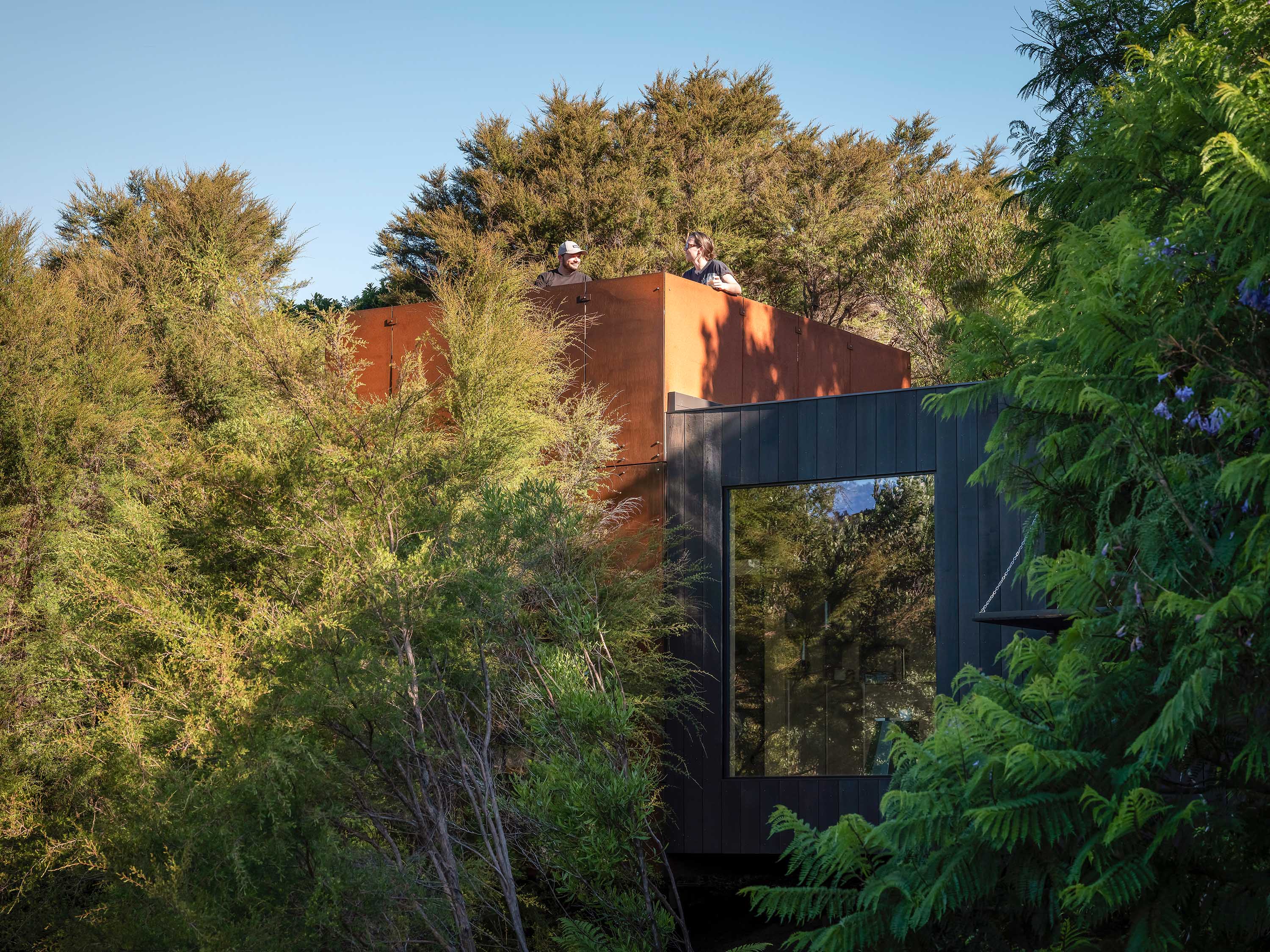 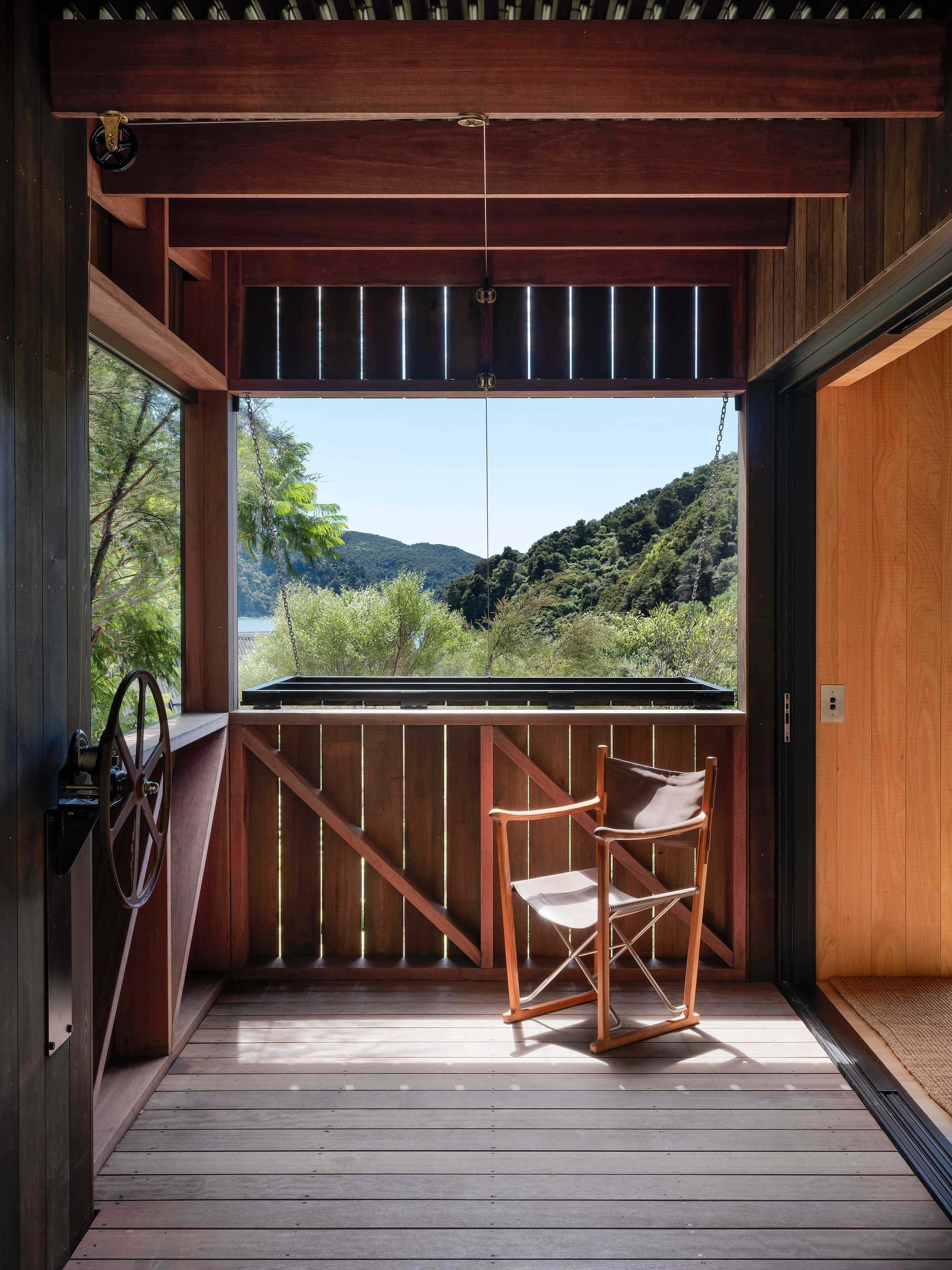 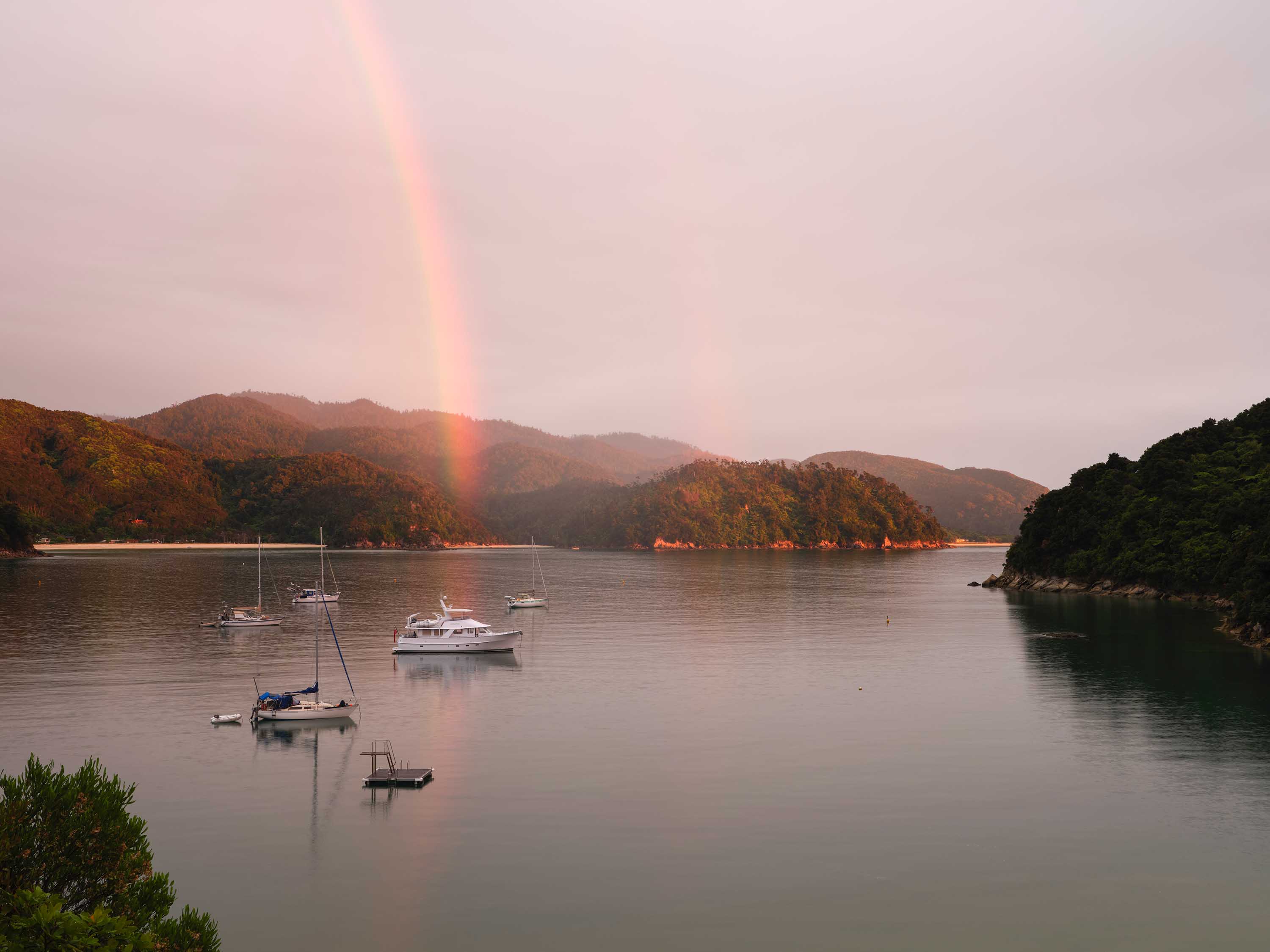 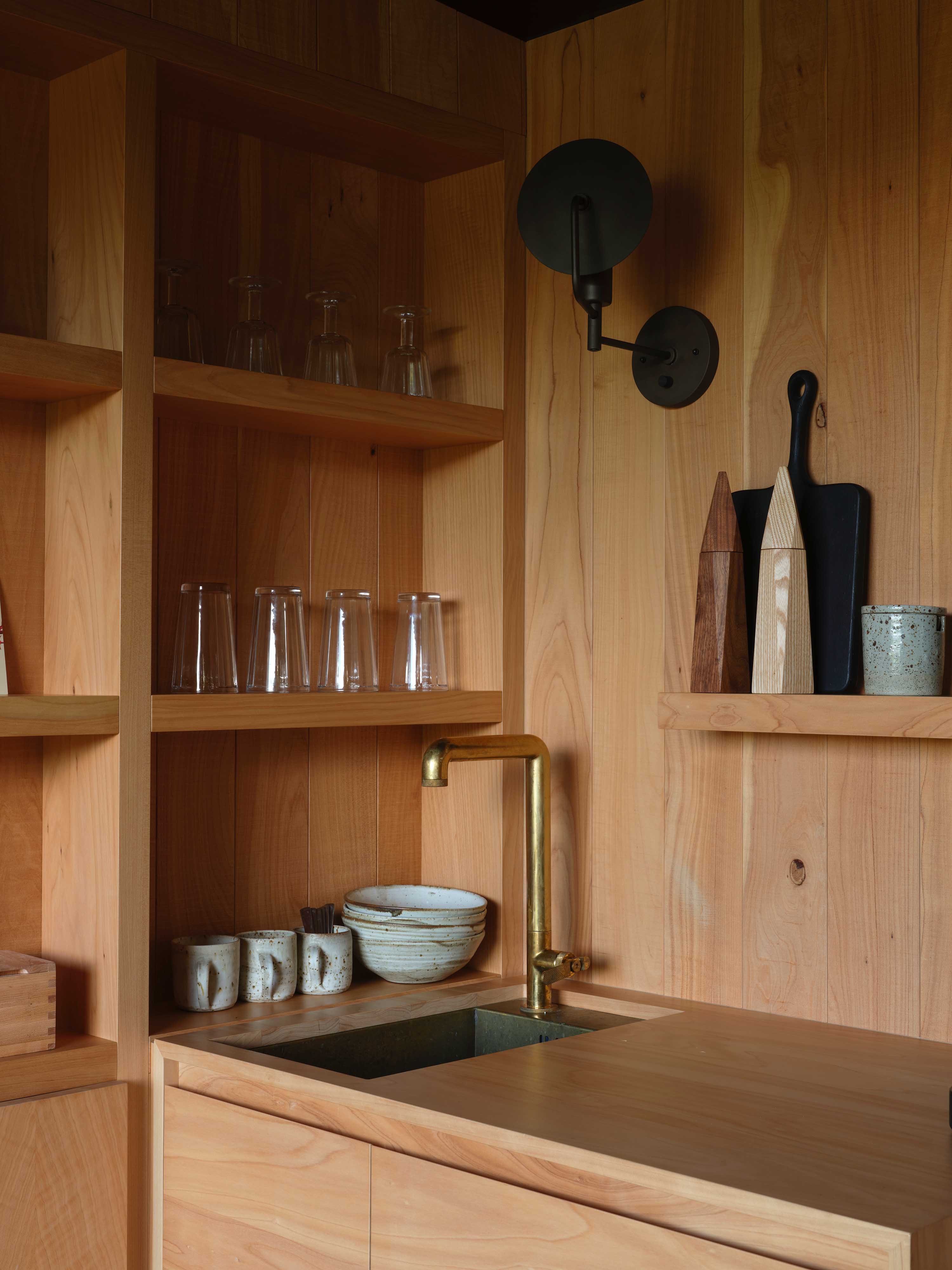 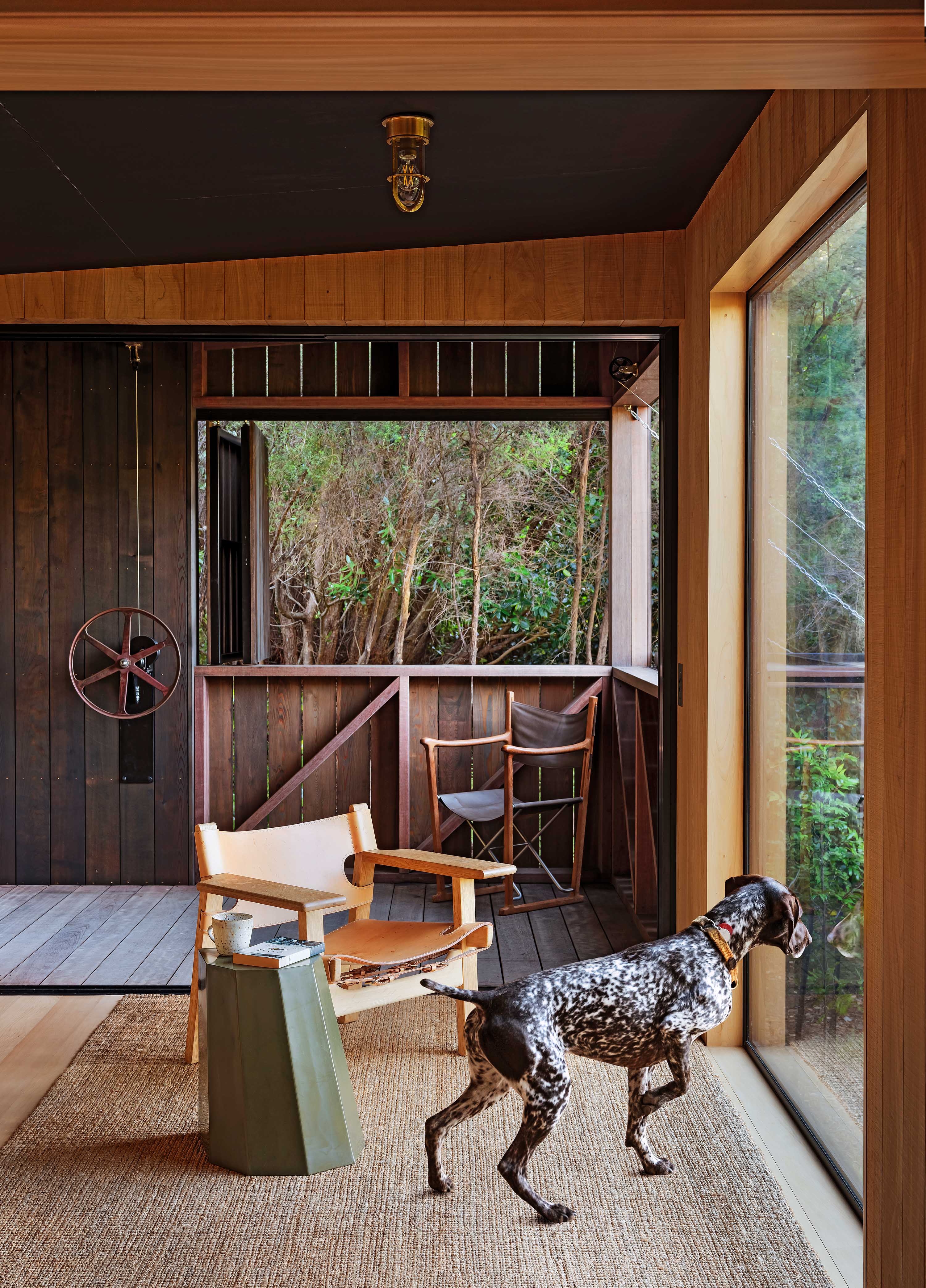 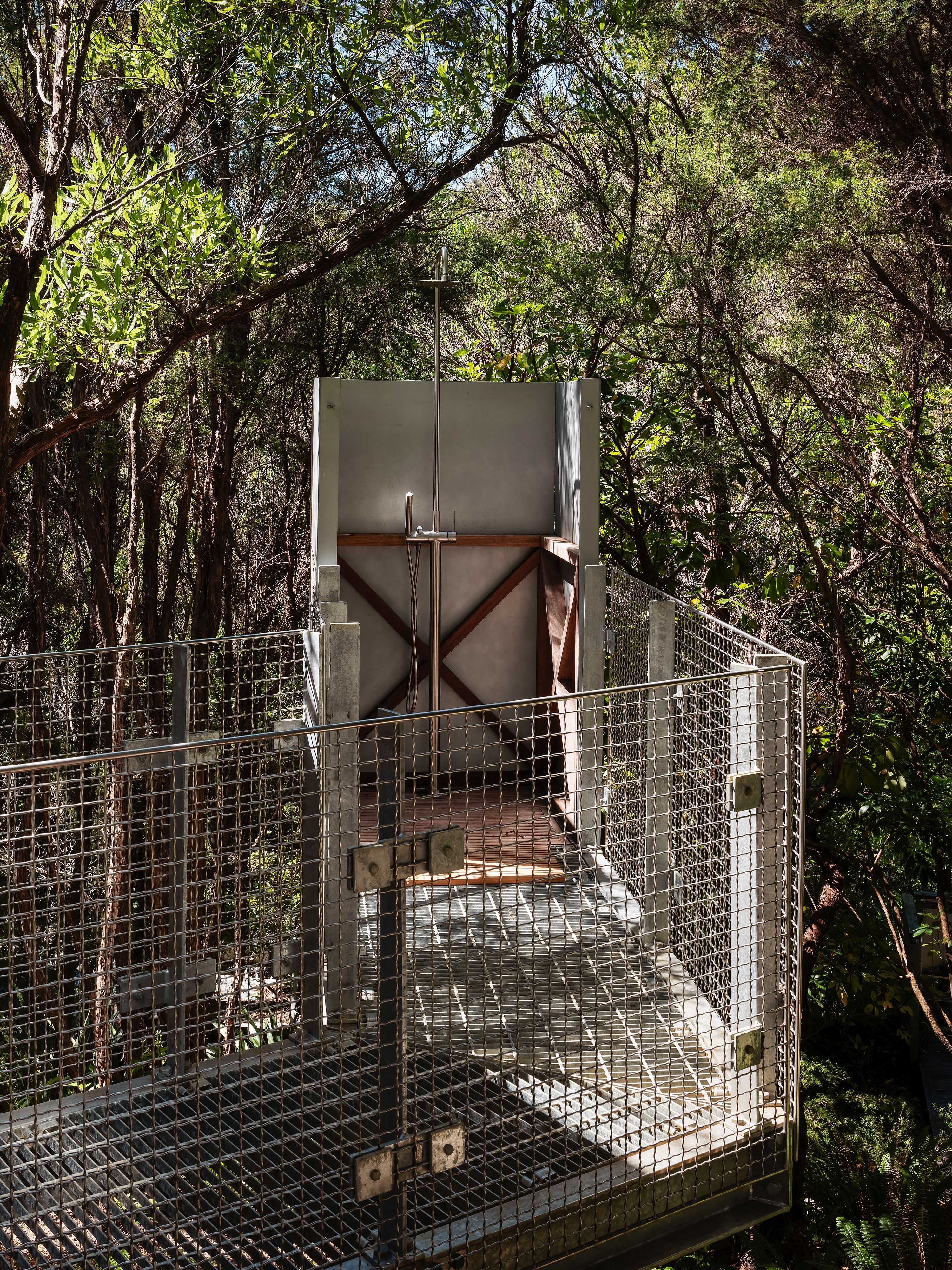 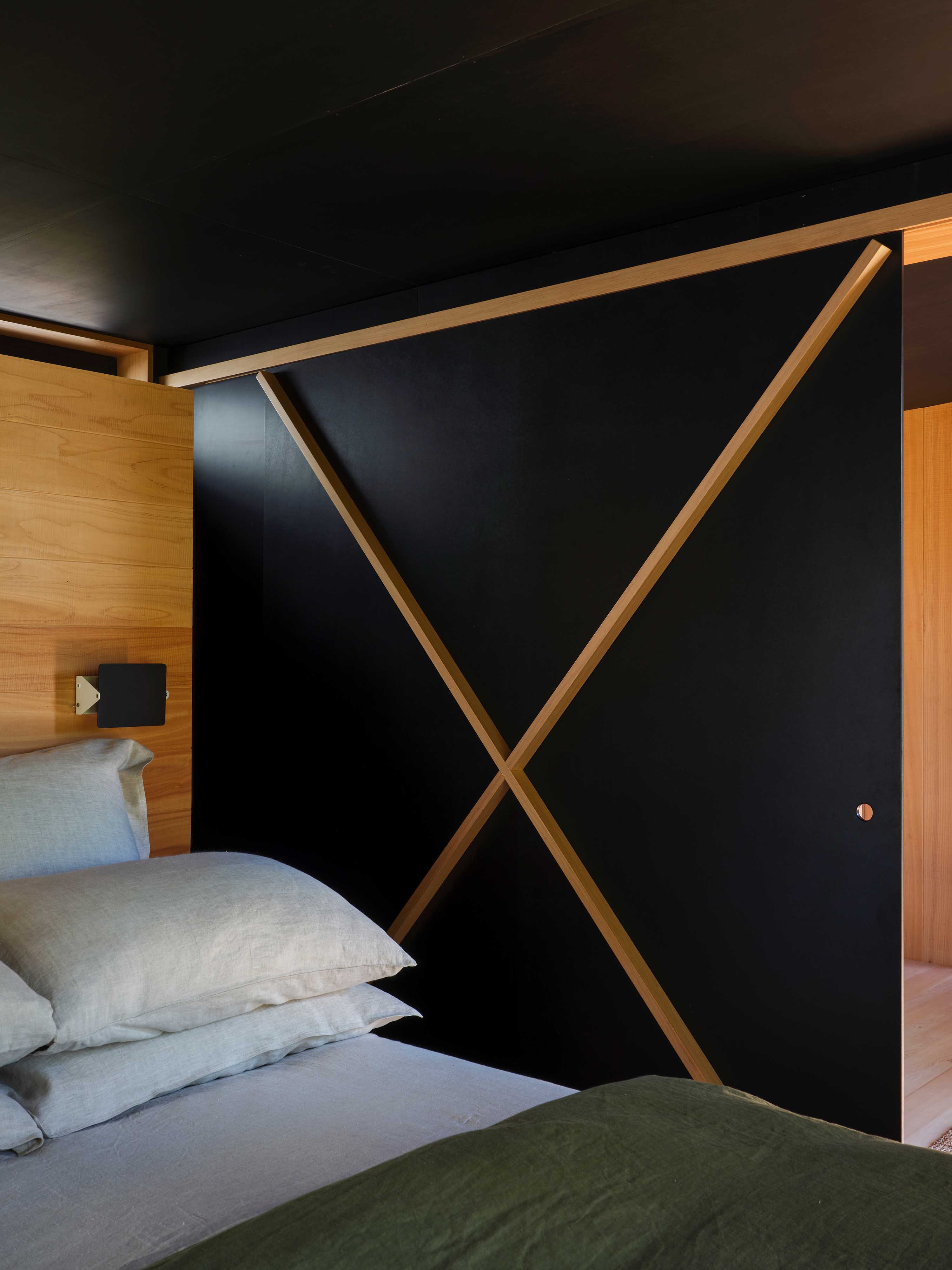 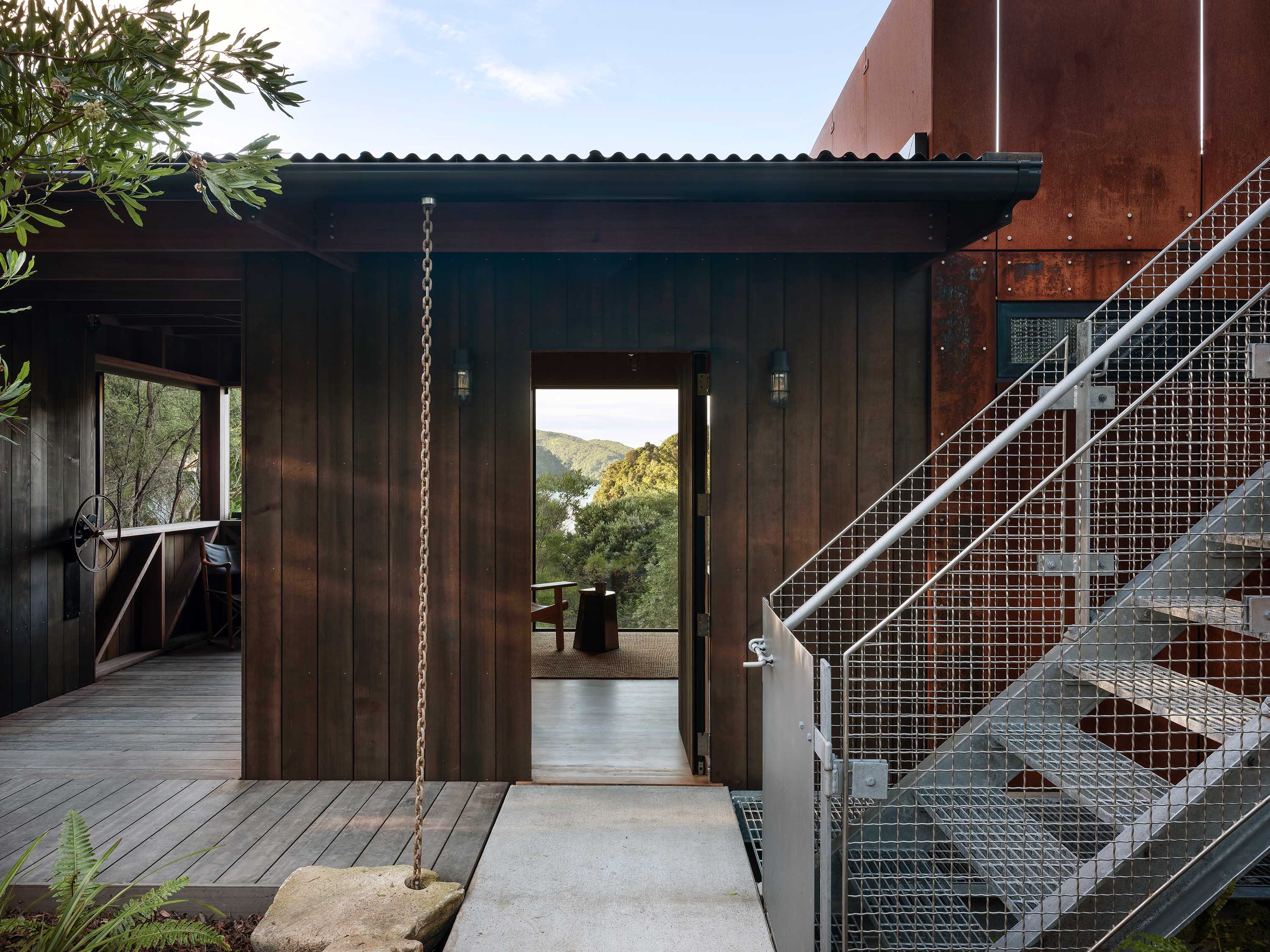 “We knew the building and location would be complex and costly, so we began by looking at what proportions and footprints could be achieved with minimal structure,” says Callaghan. The result sees the core of the cabin supported by just six steel piles. Arriving at a covered deck and barbecue area, you’ll find a large glass slider which fully retracts to an internal pocket, guiding you to the living space. While the exterior exhibits a certain robustness, there’s a softer approach inside. The couple didn’t want to use plasterboard, so the architects shifted towards locally sourced totara and macrocarpa, favouring their tactility and warmth. Brass accents and maritime-inspired light fixtures are well considered, and a curated display of books and belongings line the central wall. “The idea there was to make it look as if the facade had been stripped off to reveal the framing,” says Johnstone. A sliding partition then connects you to the bedroom. The door was influenced by a wardrobe mechanism seen in the late Allan Mitchener’s Messervy House – Johnstone once co-owned the mid-century Ōtautahi Christchurch home with her parents and has reimagined the familiar crossed slider as a room divider. It recedes to reveal the bed, hidden his-and-her wardrobes, and a window seat on the eastern wall.

“Overall, one of the things informing our design was keeping the cabin and all of the associated things quite discreet,” explains Johnstone. “But it loosely draws on the neighbouring DOC campsite in the way it is arranged with the toilets and showers removed from where you sleep.” Outside, a metal mesh walkway eliminates any concerns about surface runoff and leads you to the outdoor shower. Wrapped in steel but open to the elements, the washing area is suspended in the trees, placing bathers amongst the tūī and bellbirds. A concrete outhouse sits on the opposite side of the cabin. Dug into the hill, the bunker-like room’s glazed door gives an unobstructed view of the bush. Anywhere else, a glass-fronted toilet could be rather affronting, but here in this private retreat, it’s magic.

The design champions these forest views, with generous windows ensuring you see it all. Though glimpses of the bright blue ocean are hinted at inside, it’s not until you follow an external staircase to the rooftop terrace that you’re delivered the knockout water view. Up here, an architectural masterstroke sees the Corten steel cladding extend high beyond the roofline to transition into a guard rail.

The cabin’s remote location meant most elements were fabricated offsite before being brought in on barges, trekked up the hill and bolted together. “The basic rule was: could two people lift this?” says Callaghan. In an effort to anticipate challenges, the architects engaged Nelson’s Ferguson Contracting, who had experience in the area, early in the design process. To limit other onsite errors, many of the elements – such as the stairwell, shower and walkway – were constructed in workshops for client approval before being taken apart, sent to the site and reassembled. Contingency plans have limitations, though; when it came to the in-situ concrete outhouse, the only solution was to helicopter the materials in.

It’s a tactile and experiential stay. The cabin runs on solar energy but functions primarily without electricity, so manual solutions take precedence – rudimentary fixes, executed with uncharacteristic elegance. The front shutter on the lower deck is a prime example. Opening to the view and elements via a pulley system, the hinged screen is controlled by an old cast-steel wheel the couple sourced from a Richmond secondhand shop. The ventilation follows in a similar vein: low windows along the front of the bedroom allow cool air to flow inside, while high openings at the rear transfer heat out. A tall shutter on the bedroom’s eastern wall provides additional cross ventilation, and all can be left safely ajar. Which is fortunate, because if the main glazed door is left open, the local weka tend to make themselves at home.

Though Johnstone and Callaghan may refer to the experience of staying here as “a simplified holiday”, the detail, craft and unorthodox solutions behind this cabin in the woods cannot be overstated. It is intentionally restrained, the core of the cabin and lower deck measuring just 34 square metres – but it turns out that was precisely the space this couple had been missing. 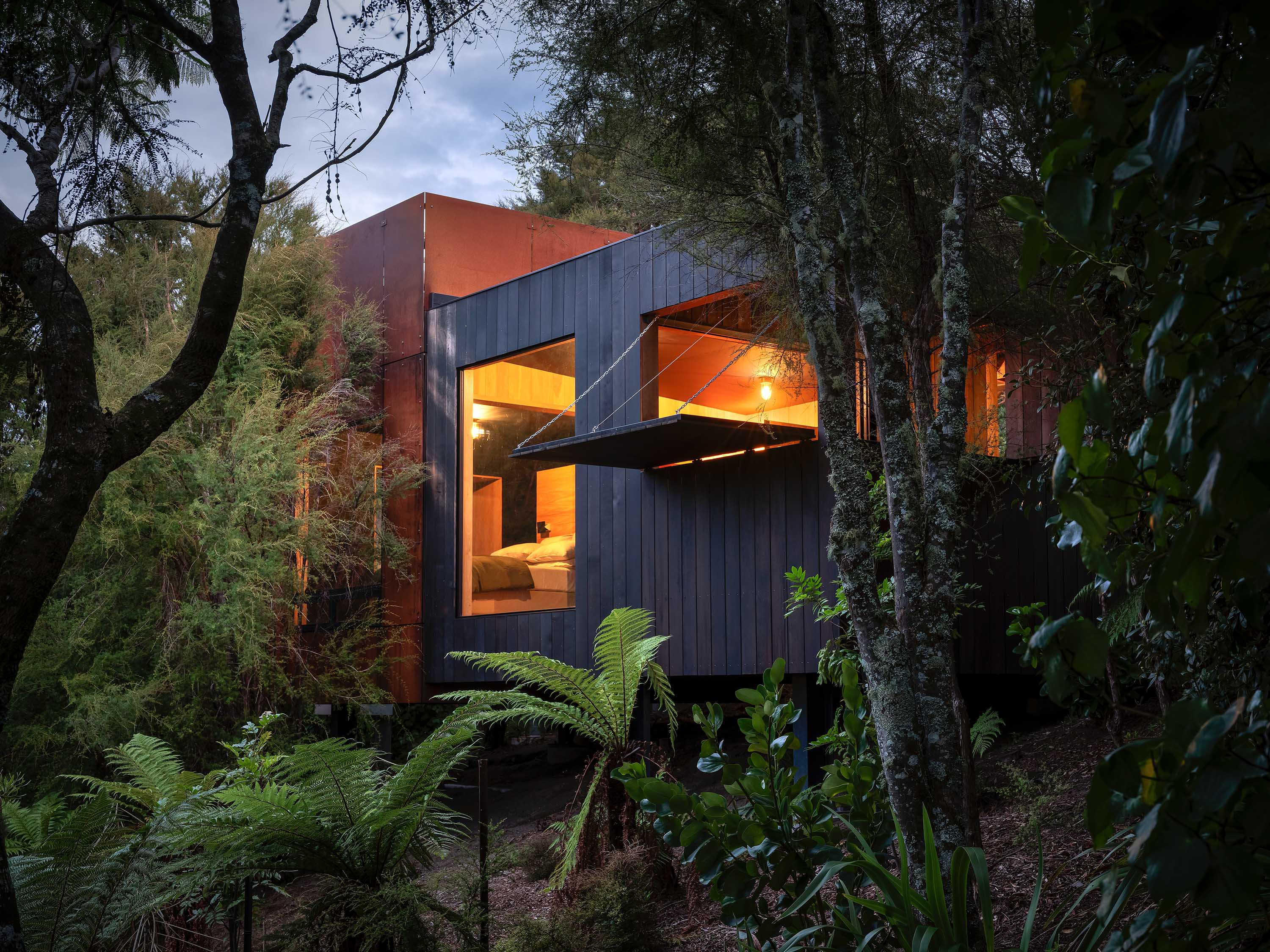 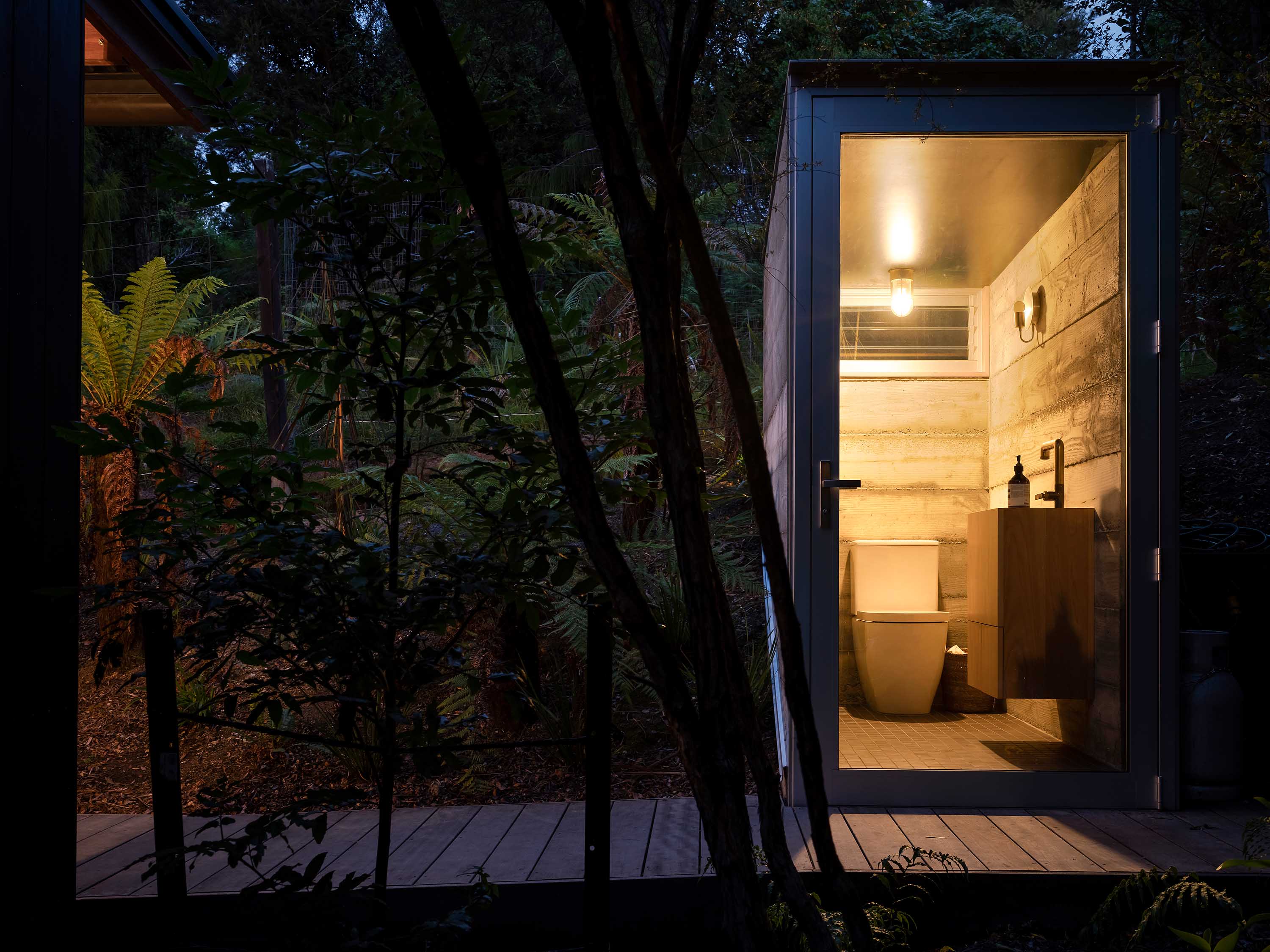 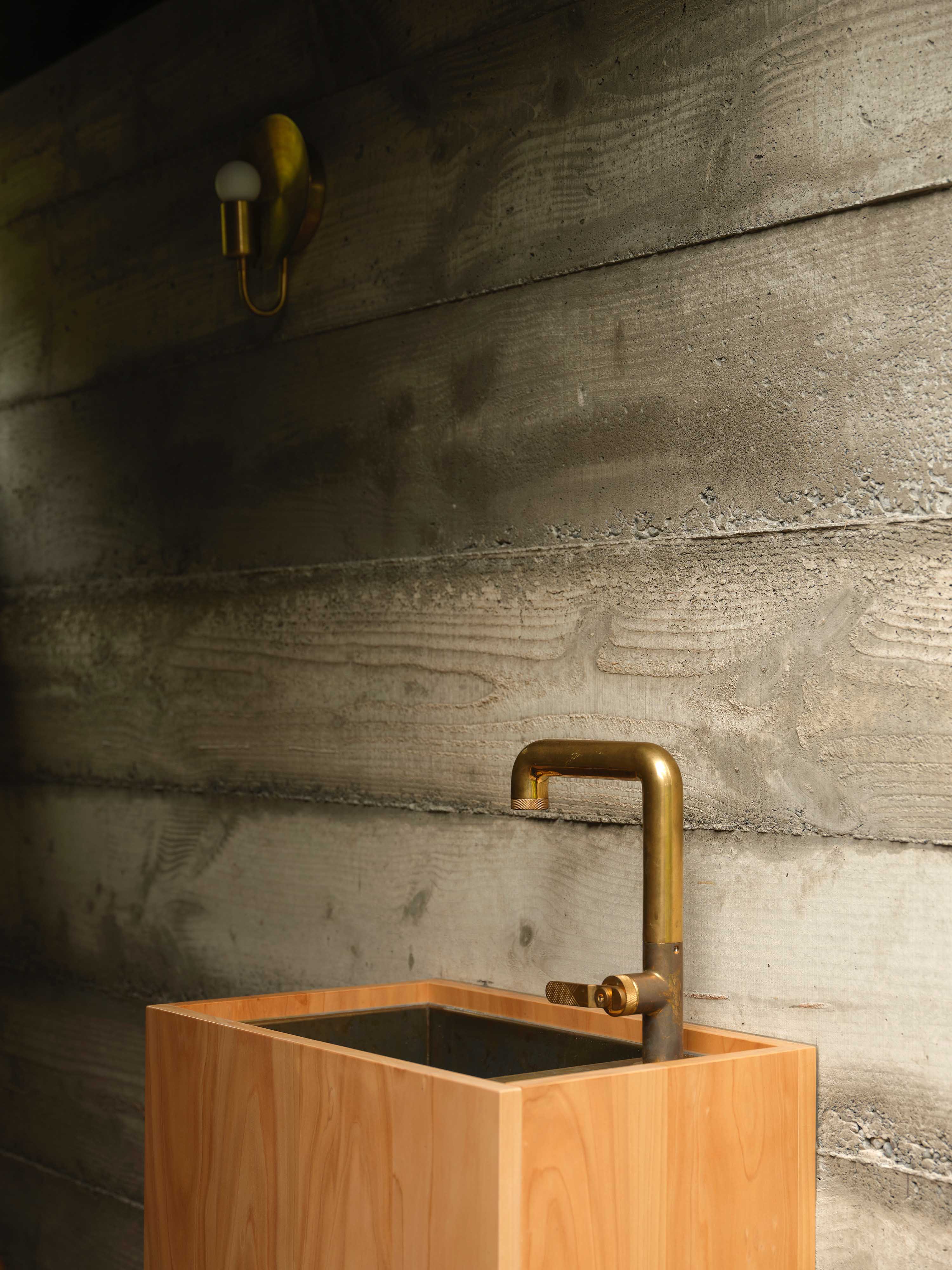 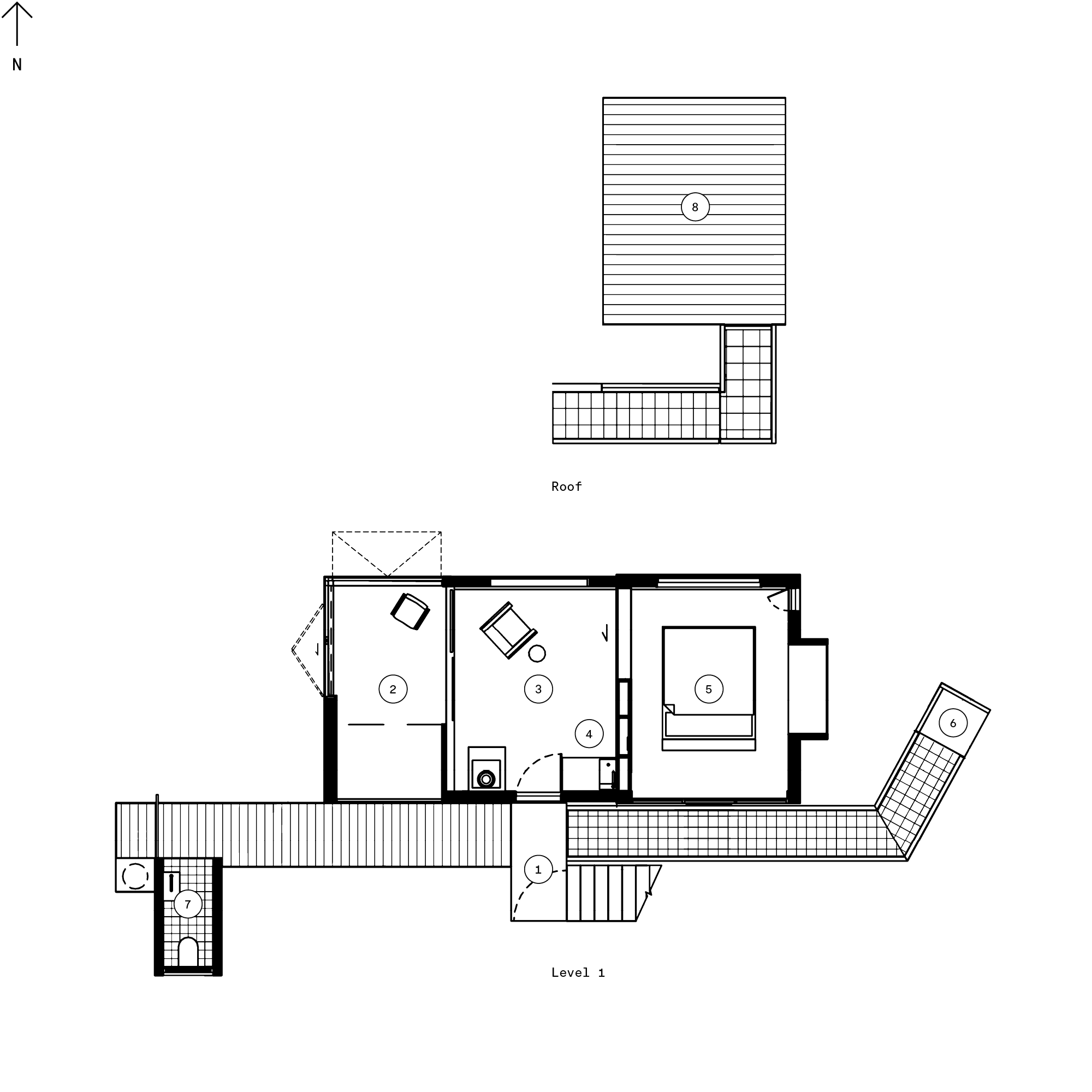