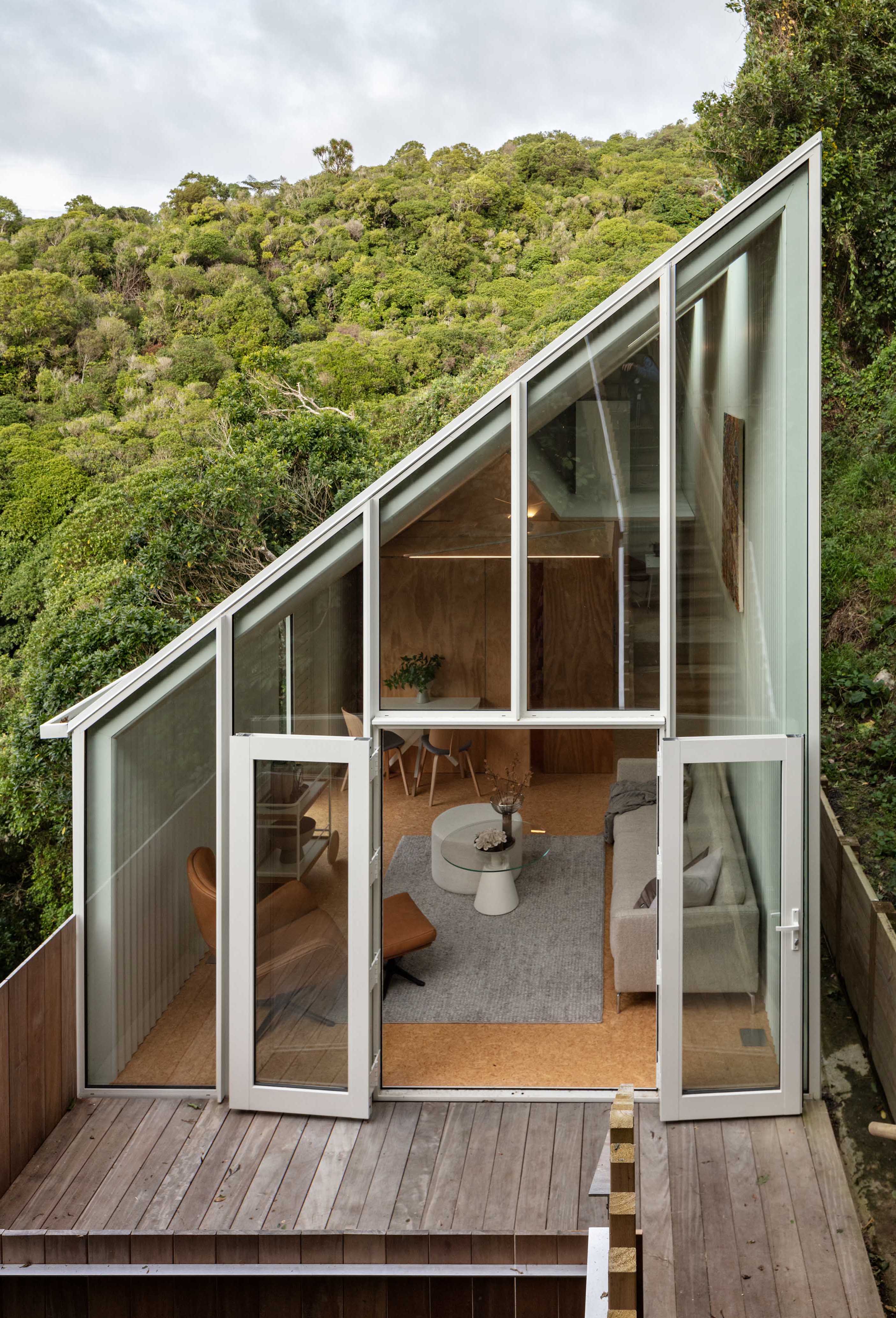 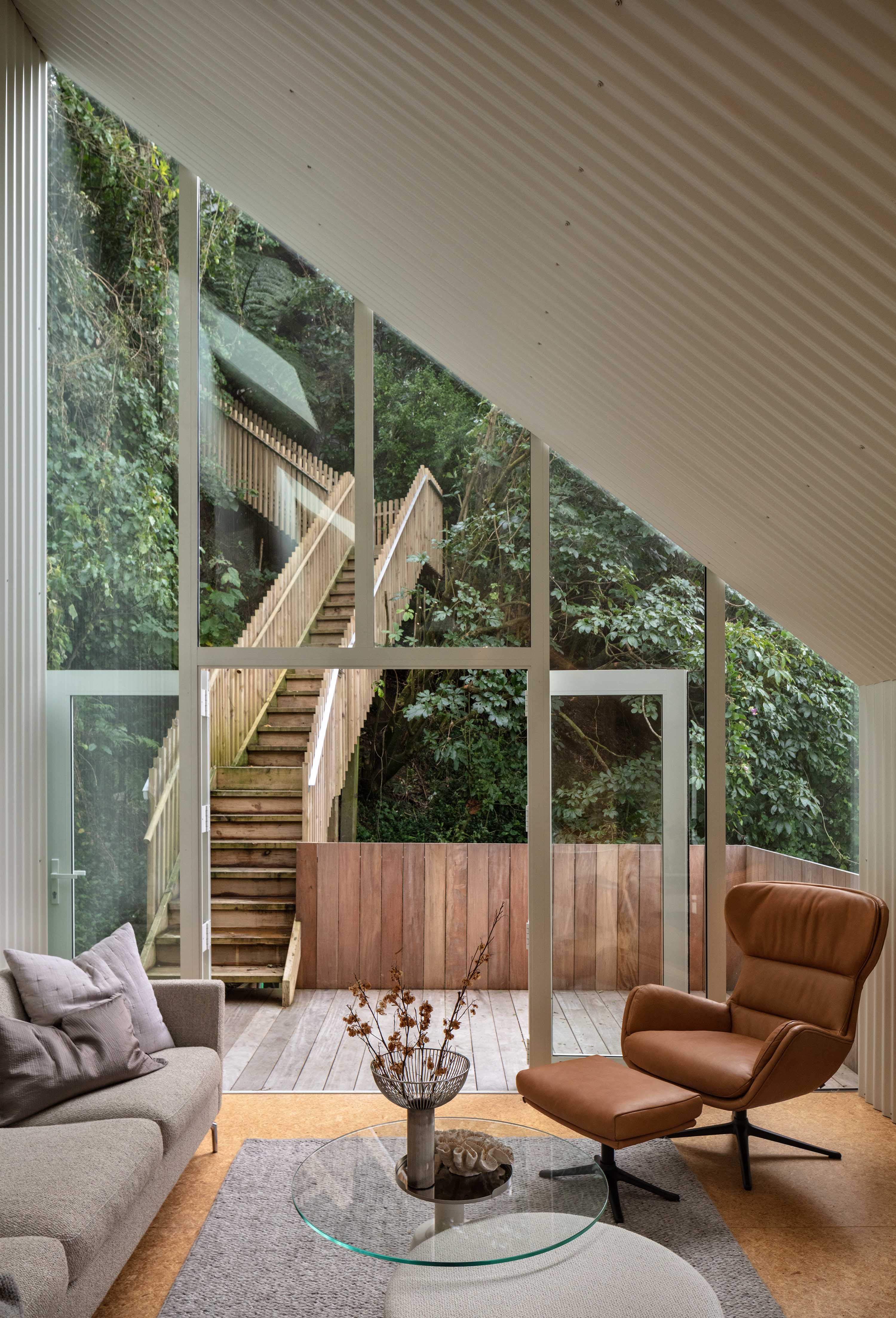 It’s one of those sites in Te Whanganui-a-Tara Wellington where you think: who would be mad enough to build a house here? A 38-degree slope, no vehicle access and a steep climb on foot down the hill. And yet, a decade ago, a relative and friend of architect Geoff Fletcher’s bought this 600 square metres or so of virtually unbuildable land.

It’s also one of those sites that, once you experience what has been built here, makes you think: why wouldn’t you build here? Fletcher designed these two lightweight houses of steel and corrugate – one is black inside and out, the other is white inside and out, and they seem to float in the trees.

There are views from both, but the top takes the lion’s share, with the outlook extending over a bushy valley and stretching down to the harbour. It’s one of those unexpected views that belies proximity to the central city. “I love this kind of density,” says Fletcher, of the two dwellings he’s designed for this Aro Valley site. “It’s what we should be doing with our city.”

Fletcher was bemused by the site but unfazed by its steepness. “Everything was done by hand, even the excavation was hand dug,” he says. “It’s a bit silly really.”

Fletcher’s mate, the owner of this site, wanted to build an economical, well-designed rental property. He lives in Europe and, pandemic notwithstanding, has no intention of coming home soon. Fletcher’s proposal was to split the site in two through the middle and build a house on each section, one above the other. Fletcher would take ownership of the top site and his friend could rent out the house on the other section. Sounds easy, right?

Access was the first issue. The section was serviced by a narrow access way to the bottom site, but the top site lacked access: Fletcher solved this with some delicate negotiations with the neighbours, which he insists involved the purchase of a big-screen TV.

Though he has form here on this ridge. Fletcher lives and works down the street with his daughter Maia in a lightweight steel-frame house built from silver EPS panels, more commonly used in the construction of coolstores. The house went up quickly, with the panels fixed internally to avoid the need for scaffolding. Fletcher is not unfamiliar with an out-of-the-box approach to construction, and that can be seen here.

The two houses share commonalities – lightweight, built from steel, with prefabricated sandwiches of floor that were constructed in a paddock in Hawke’s Bay. But they’re quite different in design – a direct response to their position on the site and access to light.

In a position of lesser sun, the bottom house is painted white and has a soaring monopitch roof that’s on the same 38-degree angle as the site, which makes it feel much bigger, much more church-like, than its 44 square metres. From the top part of the roof, skylights grab light and drape it down the corrugate walls. The view extends out through trees and over the valley. 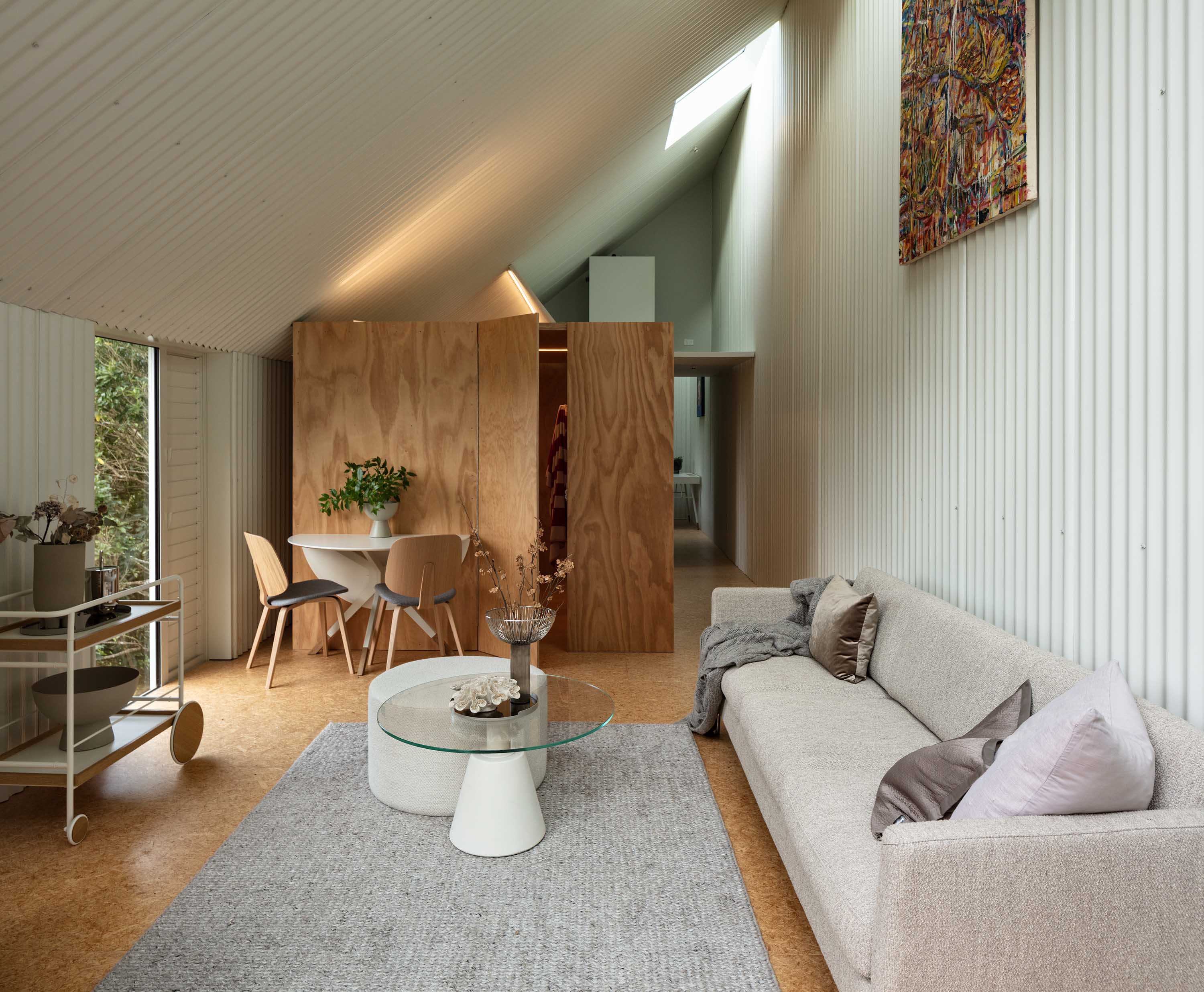 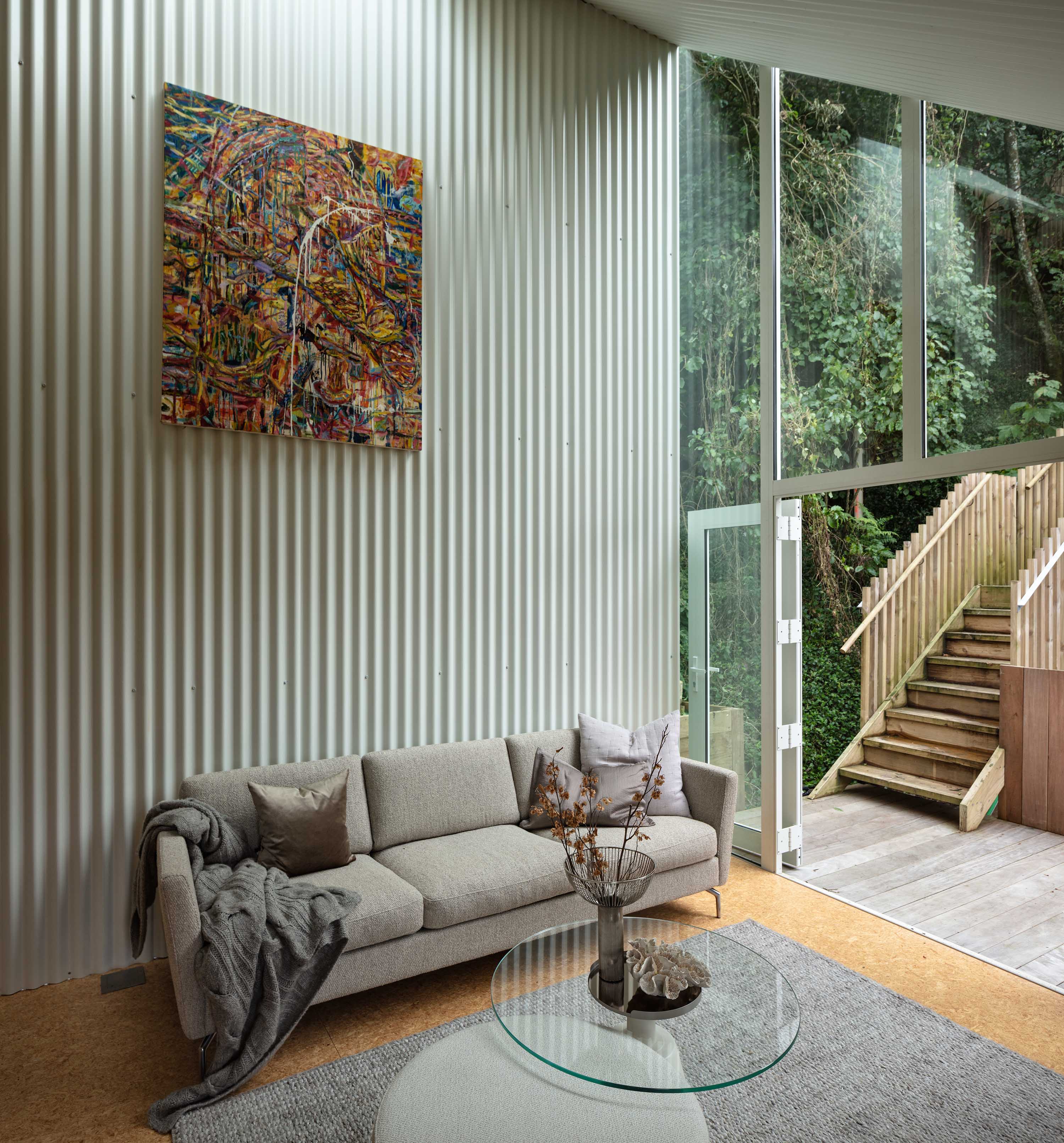 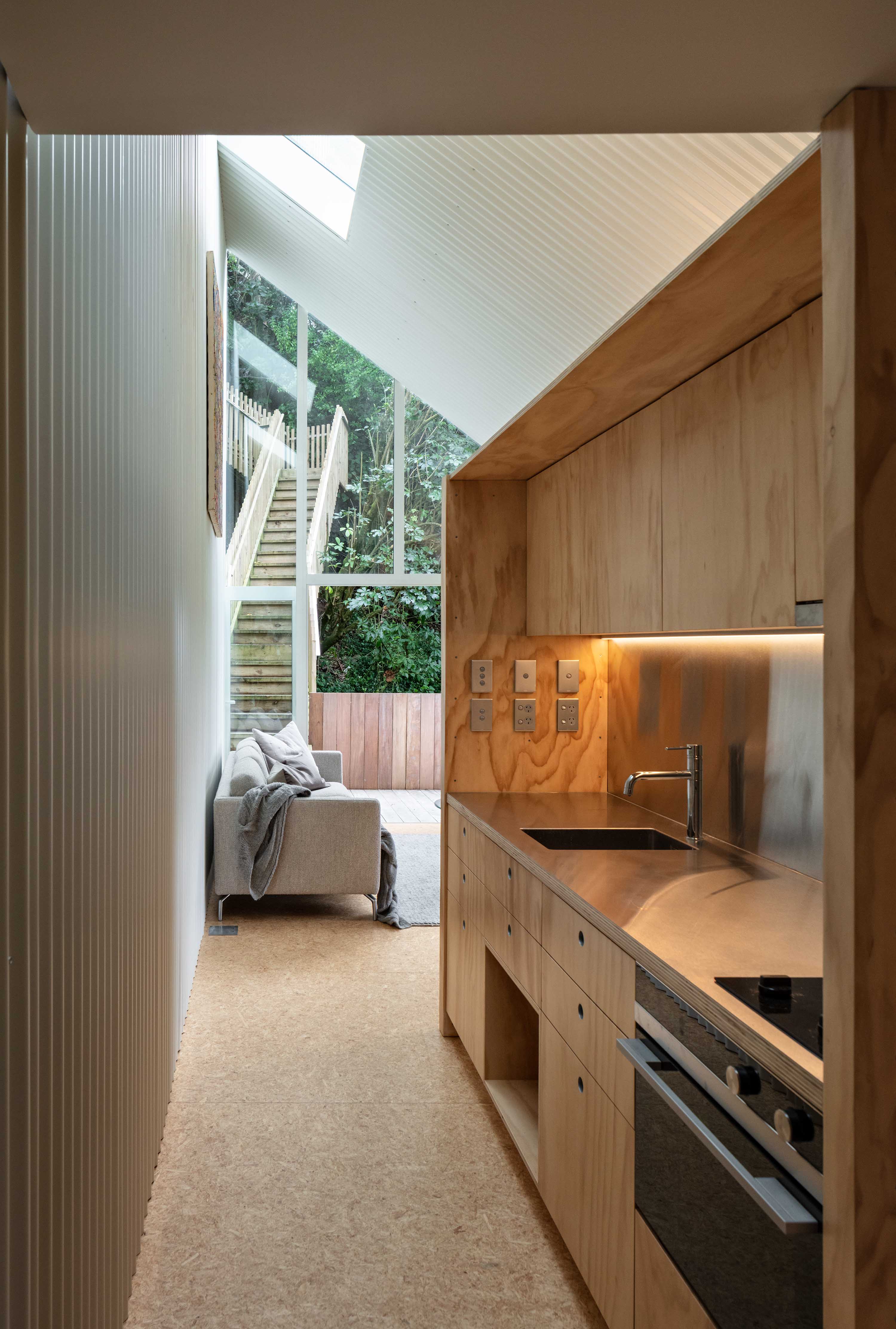 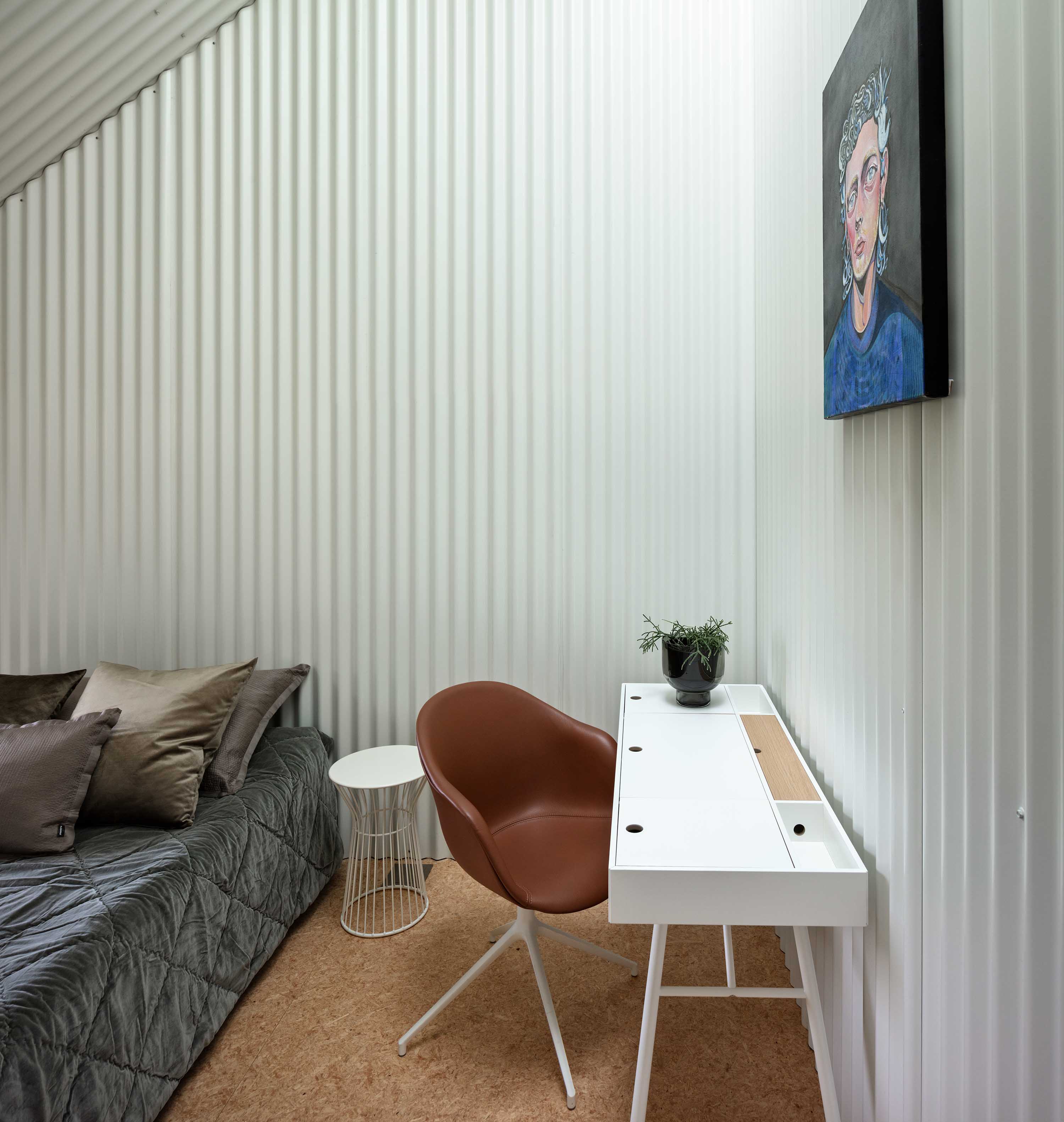 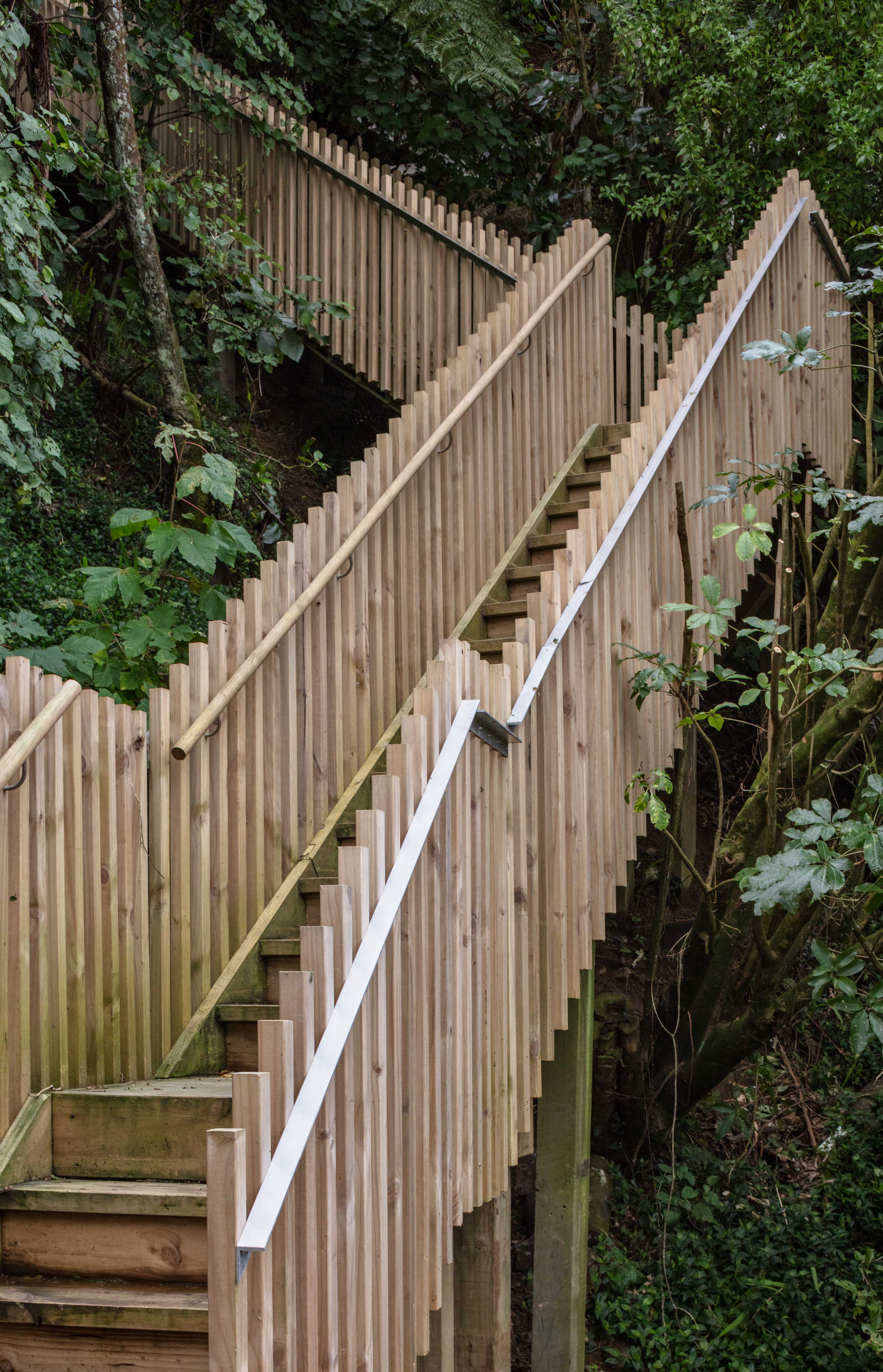 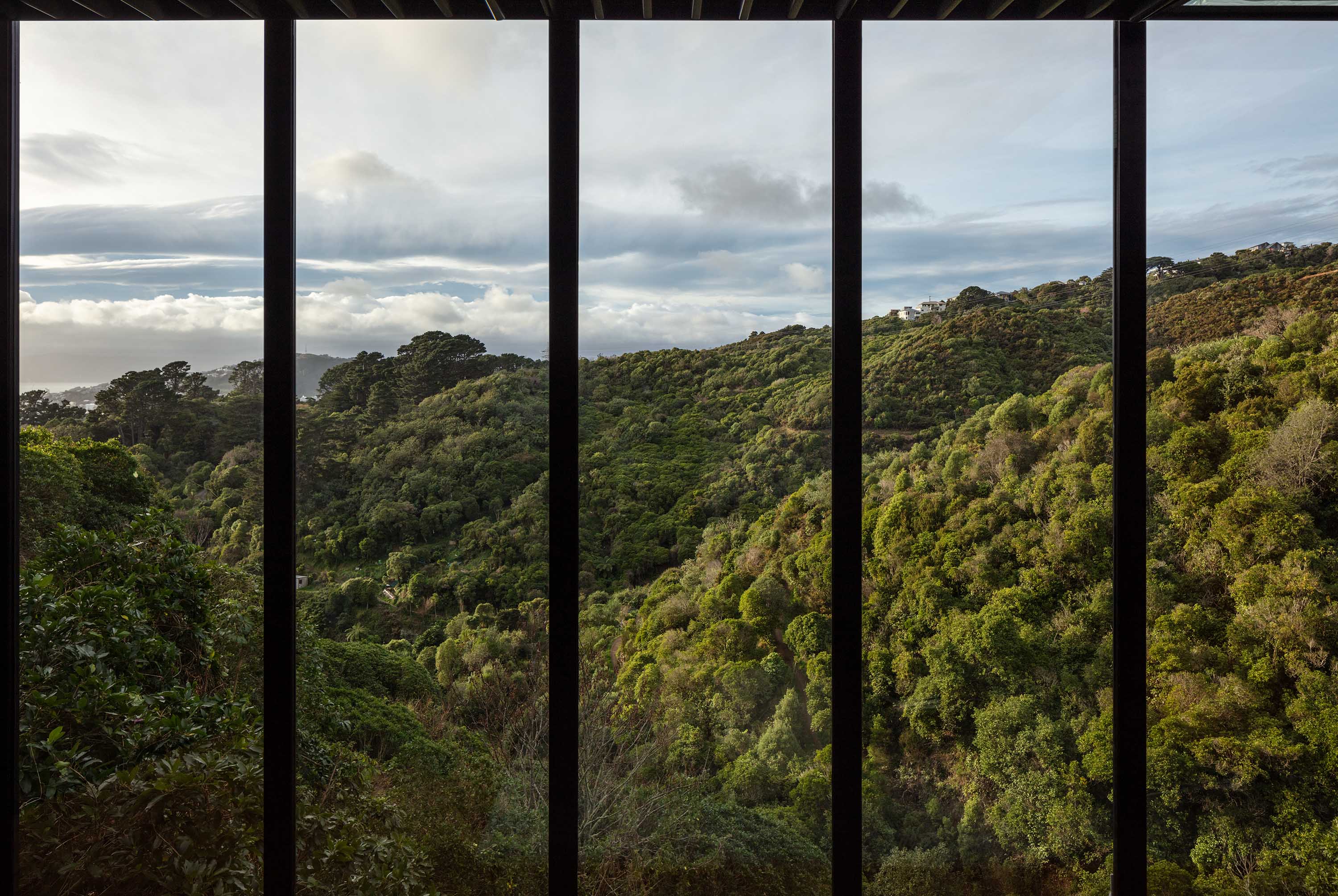 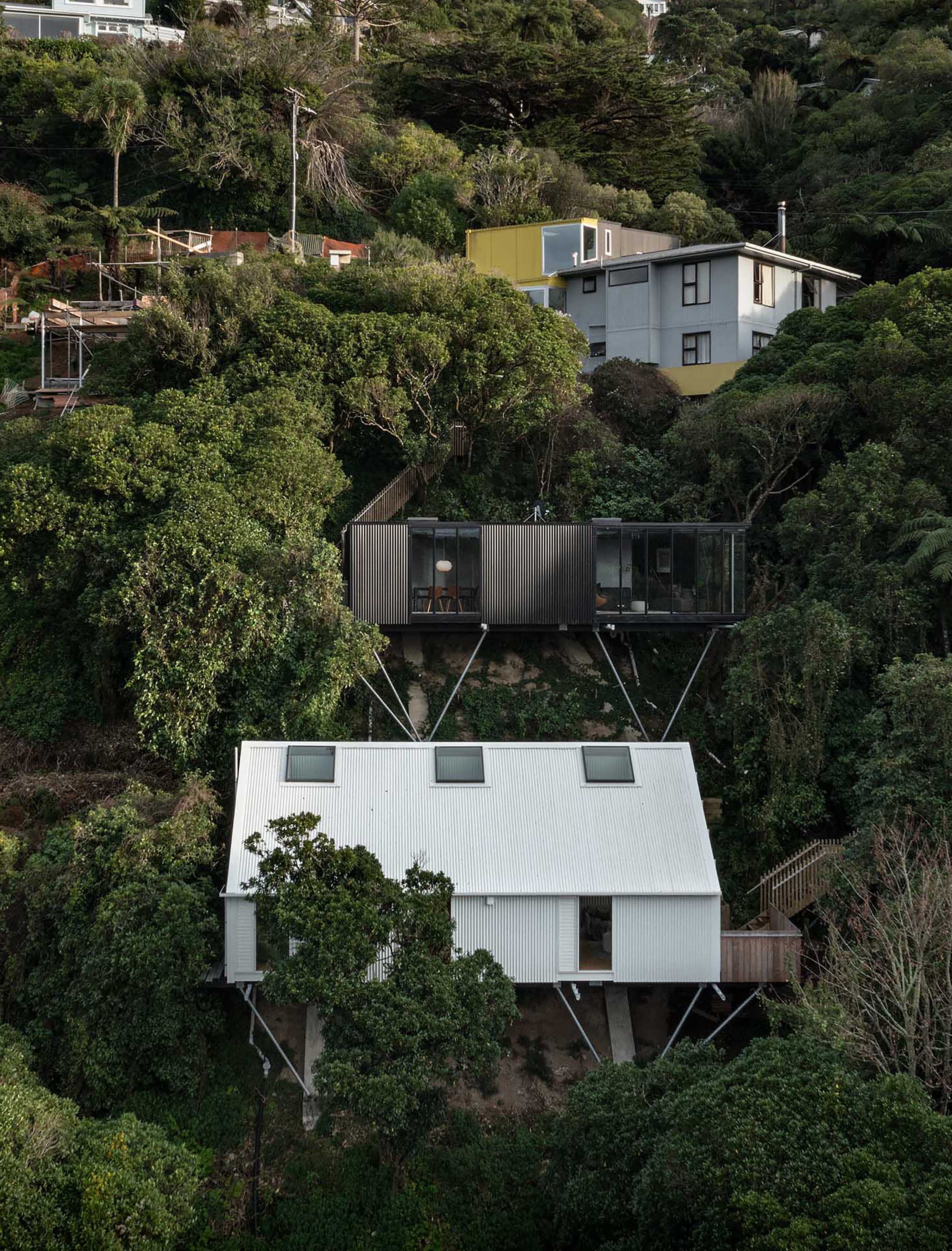 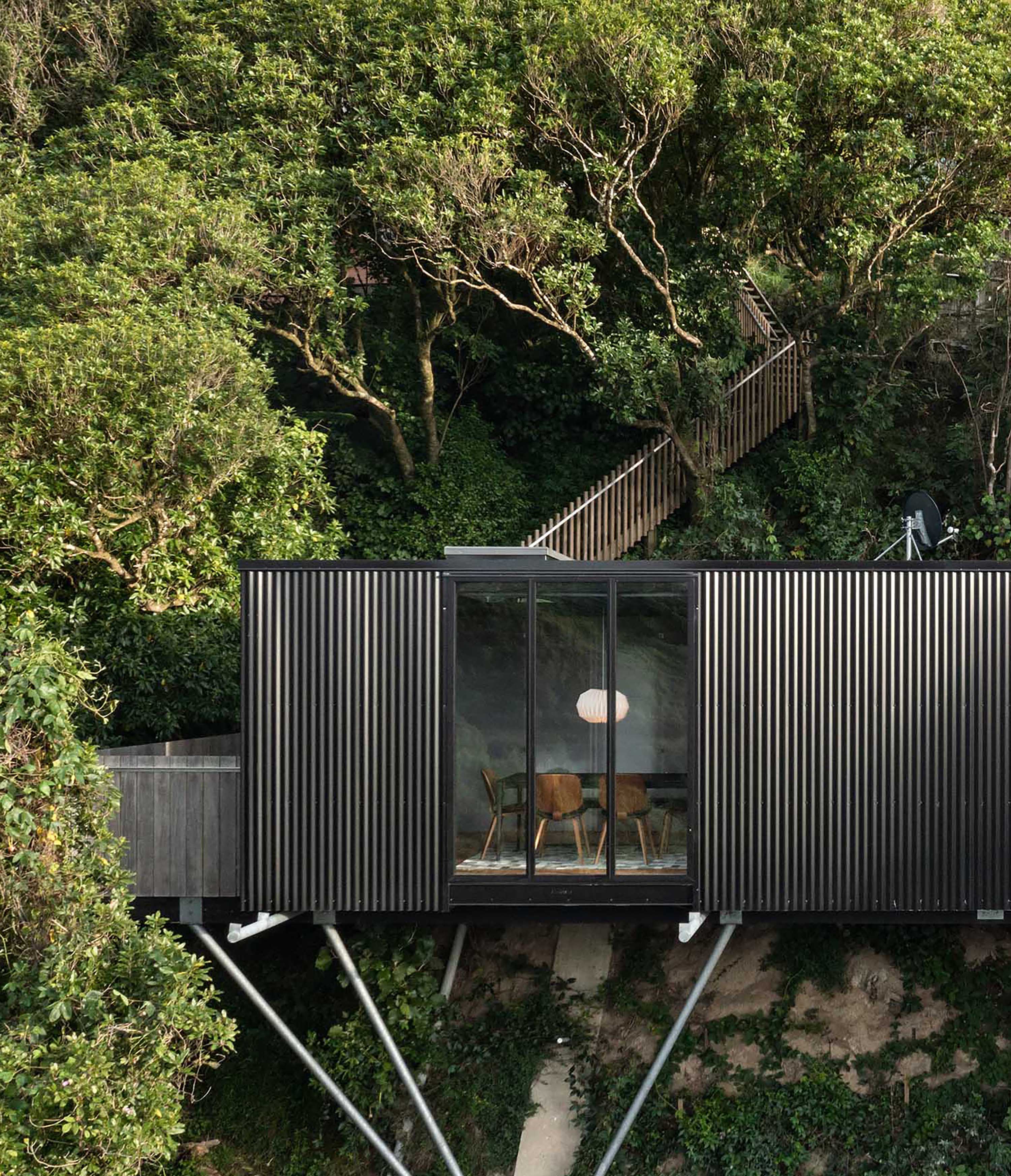 The compact, efficient design is long and narrow, with a plywood cube at the centre containing the bathroom. The kitchen runs down one side of the cube and faces into a compact hallway. Beyond the cube are a couple of bedrooms and there’s a mezzanine, where the ceiling doubles as a floor. In effect, it could operate as a comfortable two-bedroom house with an office, or as a snug three bedroom.

The simplicity of the plan continues through to construction. “It’s a farm building,” says Fletcher. Built from 150mm steel framing, builder John Verstoppen carried the lengths of steel in pieces down the timber steps from the road, then cut and bolted them on site. Every four metres, there’s a back-to-back portal, with over-code insulation in between and white steel corrugate cladding over the top inside and out. If the place was built from timber, there’d be a forest of wood in those walls, and thousands of screw holes across the corrugate.

Instead, the walls are largely clear – an almost unbroken skin of white corrugate. “It drove him nuts, but he loves Meccano,” says Fletcher, of Verstoppen. Why steel? “Less material. It’s not heavy. It’s a pig to build if you don’t want to do it, but we had someone who wanted to build it that way, so for me it was a lovely experiment.”

Back up the stairs, along the road and back down another flight of timber stairs and you reach Fletcher’s black house. It’s flatter, less angular and slightly bigger, with trapezoidal black corrugate cladding instead of rounded corrugate. It, too, sits lightly on the site: concrete pontoons plunge into the slope, with steel supports bracing the platform.

Inside, the plan is equally rational. You enter into the dining area, and the kitchen is a singular bar in the centre, with the living room beyond – the place seems to telescope down to the far corner, where floor-to-ceiling windows take in the view, and where you feel like you’re stepping into the air. Along the back, three cave-like bedrooms and a bathroom are hidden behind a wall of polycarbonate cabinetry. It’s dark but not oppressive – even a little glamorous.

Ask Fletcher what they cost and he’s not sure. It has taken three years, and various bursts to get them built as contractors had time - although he reckons you could build the two for about $600,000. Seriously good value for a country reeling from construction and land costs – and, it has to be said, they are punchy little houses with a decent swagger, despite the modest budget.

By the time you read this, the white house will be tenanted; Fletcher is still working out what happens with the black one and is currently living between this and his place down the street. I ask him how he works out where he’ll be. “It can’t be analysed,” he replies. “When we feel like it, it’s the silver house, and we work from there as well. Then we come up here.”

You can see why. In the mornings, there’s a raucous dawn chorus, and in the evenings the beautiful moody light of the setting sun over the hill behind them is cast onto the opposite hillside. “It’s pretty magic.” 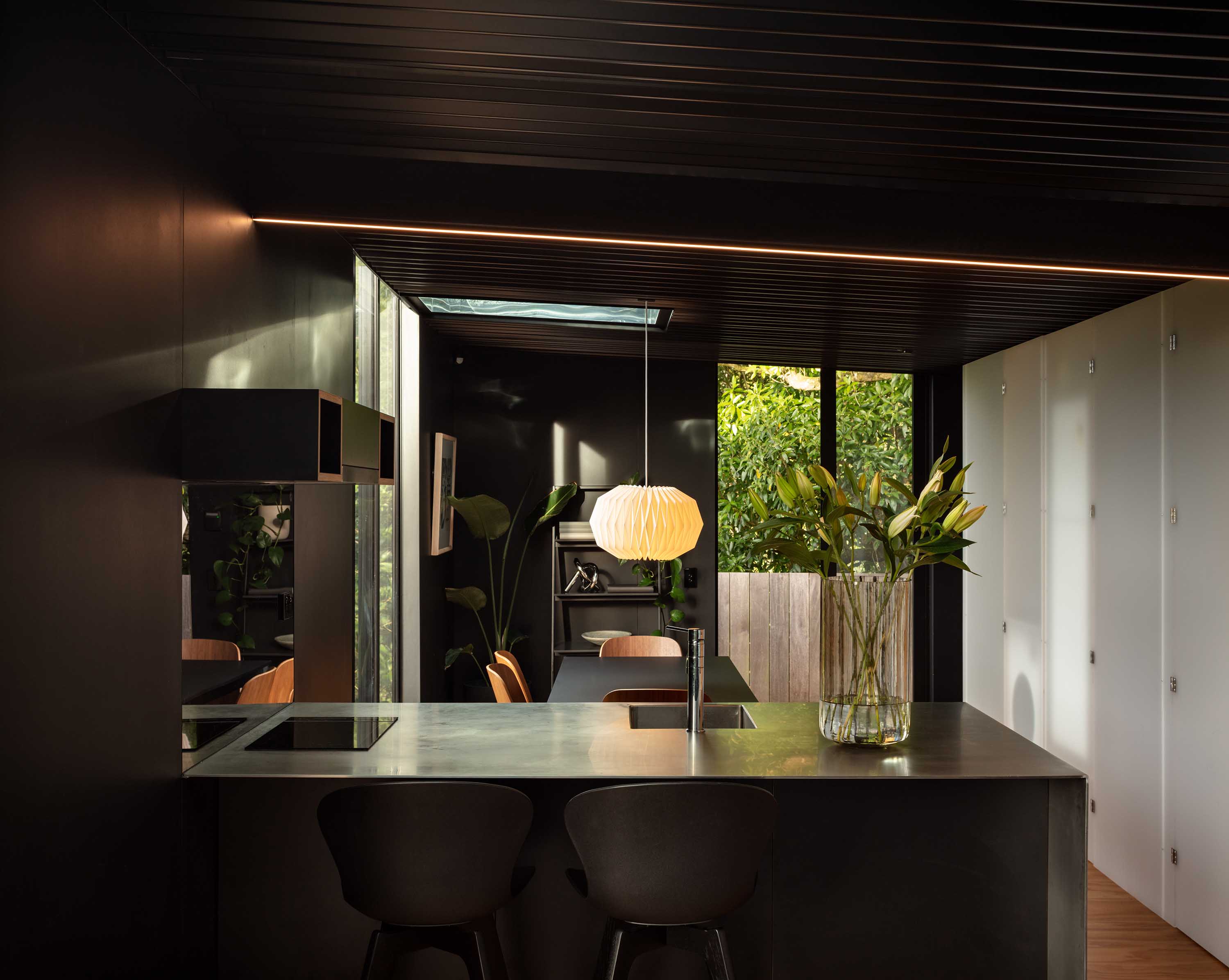 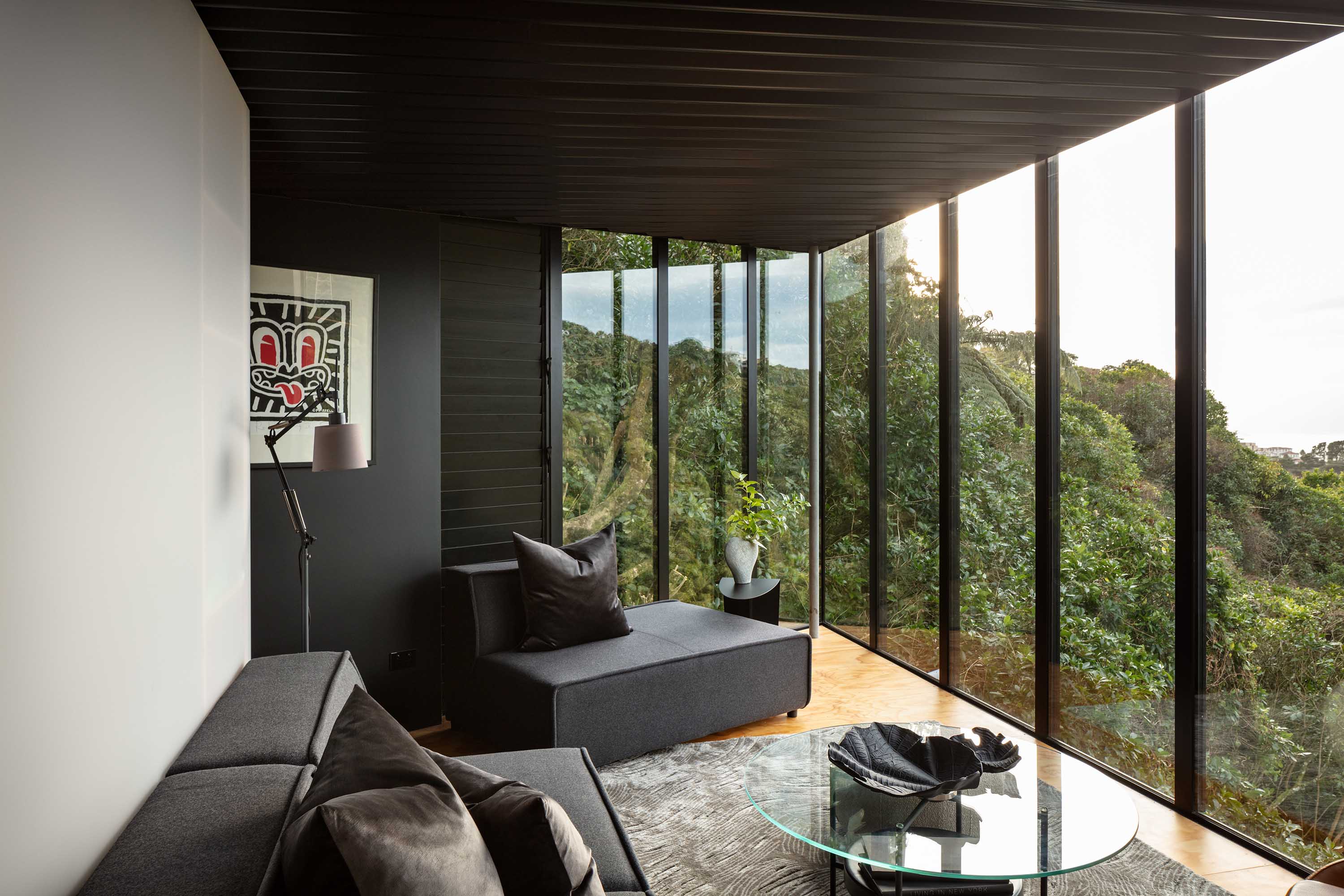 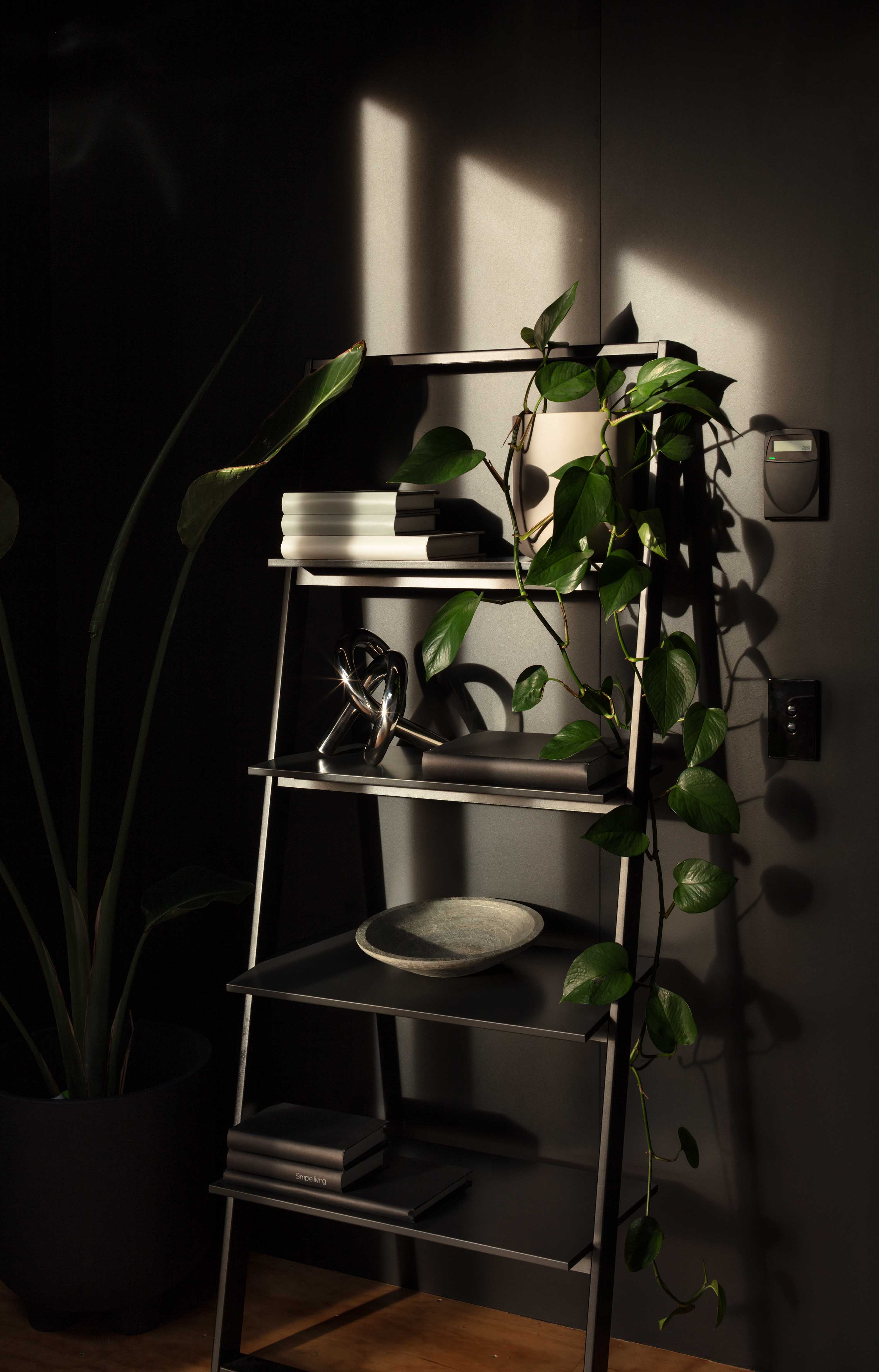 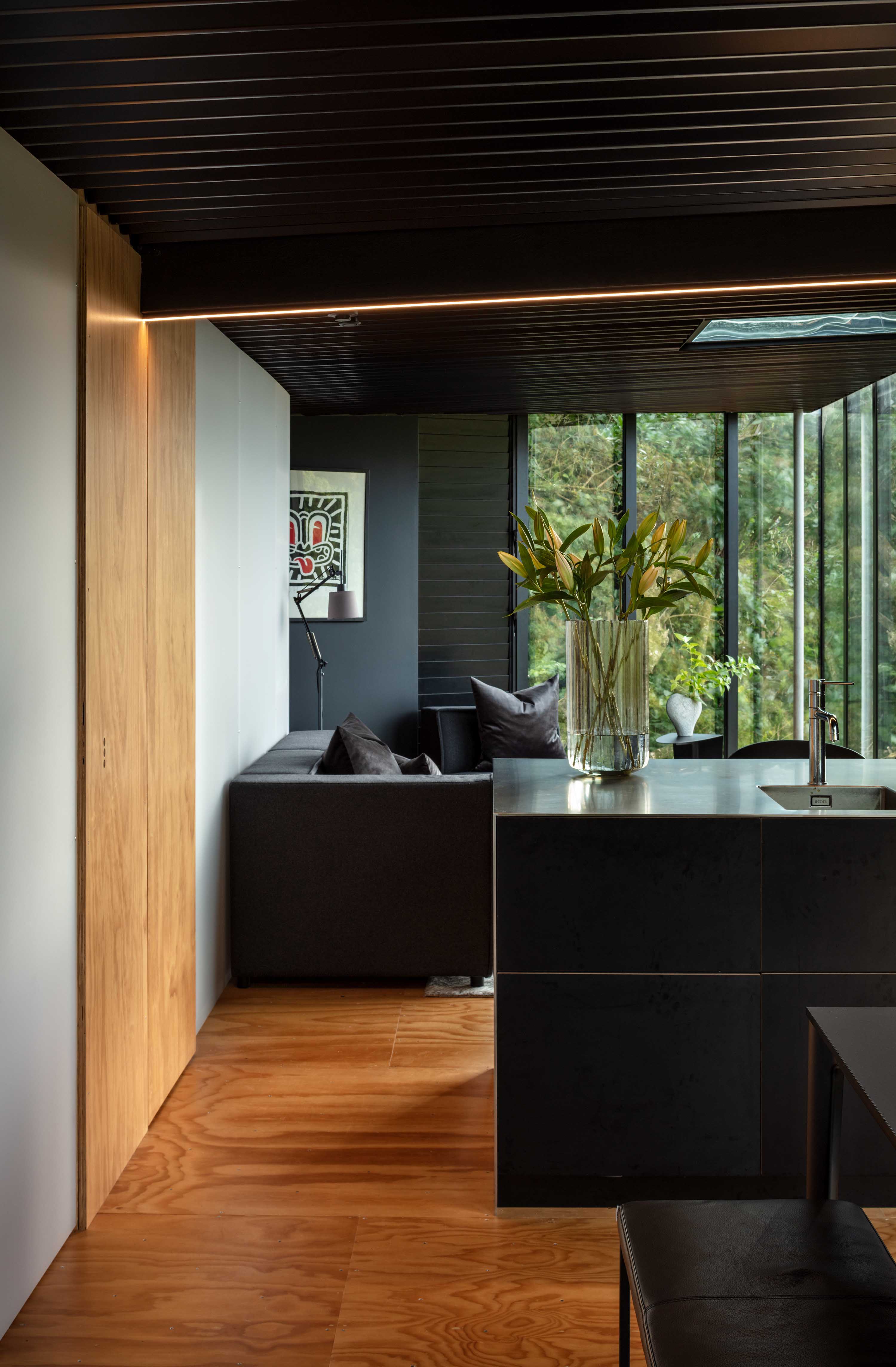 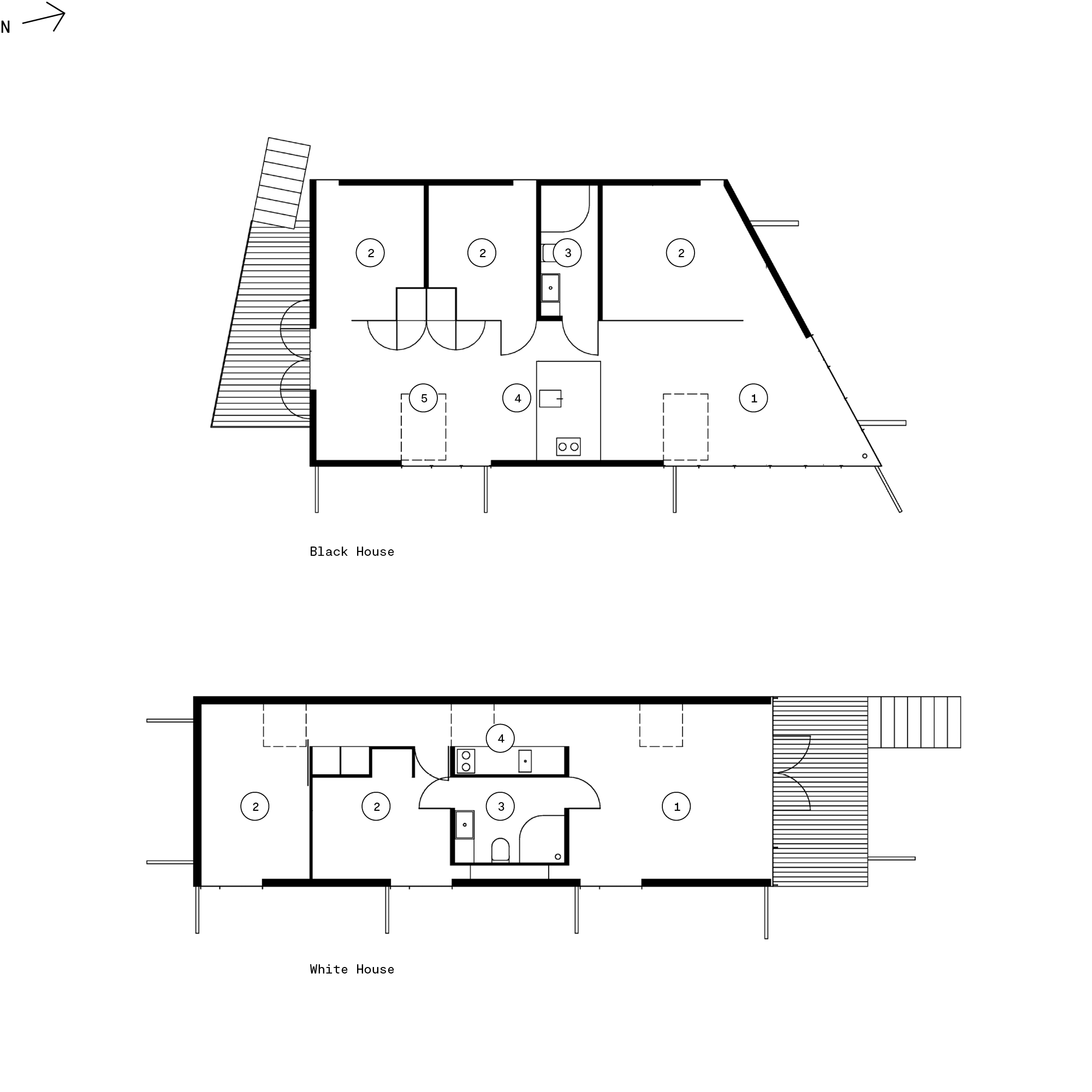