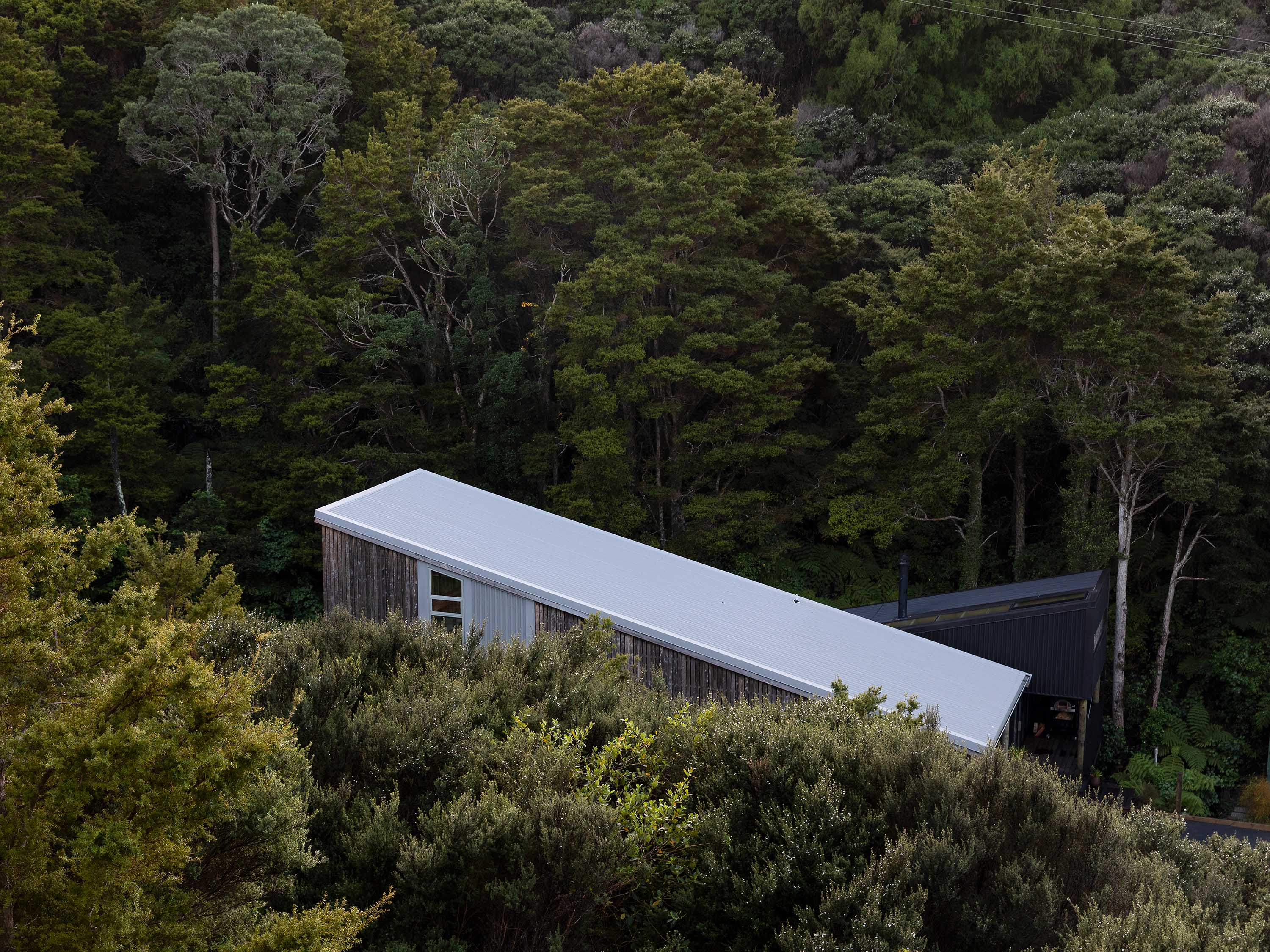 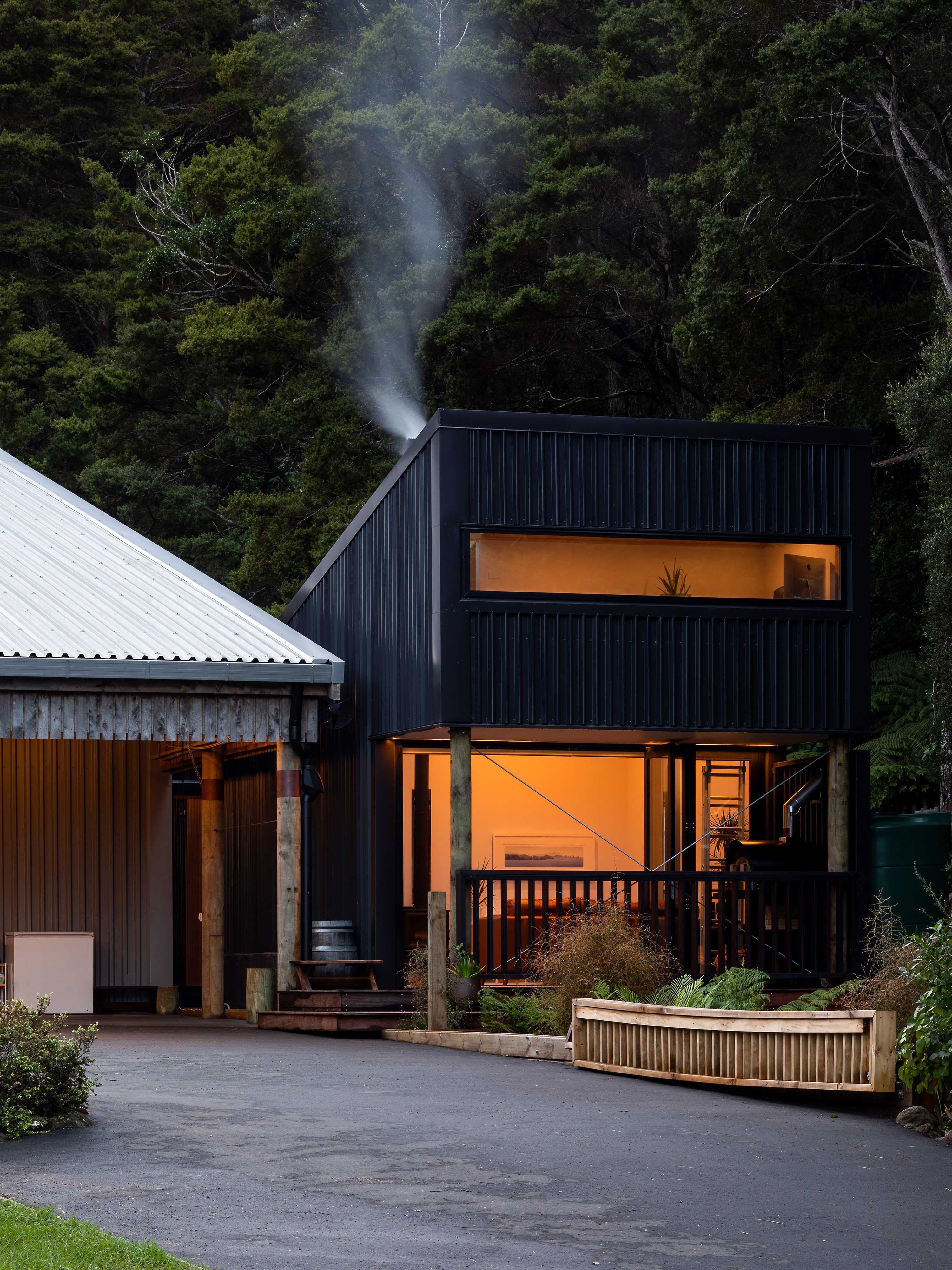 To listen to Charlotte Ryan's Spotify playlist inspired by this story, click here. There’s an old photograph that long ago acquired mythological status among New Zealand’s architects. Taken around 1915, it depicts the manager of a sawmill sitting on the verandah of his home at Piha. The hut sits in the middle of a clearing, surrounded by dense bush. Large flax plants take up almost half the image; mānuka with its hazy edges encloses the dwelling. The hut is simple and uncomplicated; in fact, it may have been this photograph that inspired architect David Mitchell’s phrase “the elegant shed” to describe New Zealand’s architectural tradition. The person sitting there was long described as “man alone” in nature, despite the fact that he was looking out over a busy sawmill. No other image did as much to inspire generations of architects to think about what a New Zealand house is, or could be.

This “man alone” – Hans Peter Knutzen was his name – in fact had a wife and children back in Ponsonby, Tāmaki Makaurau. He worked at the sawmill in Piha, earning more than he could in the city, and he supported his family with his earnings. Though the photograph at one point seemed to be a symbol of men shirking familial responsibilities in their “baches” (short originally for “bachelor”), architectural historian Robin Skinner has concluded that “his bush residence… was not a case of domestic abandonment; rather, it was one of respectable responsibility to his household”.

When Wellington-based Tim Gittos and Caro Robertson of Spacecraft Architects were asked in 2012 to design a house on the Tūtūkākā Coast for an old school friend of Gittos, it was indeed a house for a bachelor. No “household” here; instead a single man with a globe-trotting career as an electrical engineer working on yachts, and the need for a retreat when he was back in Aotearoa. The house Gittos and Robertson designed in response was dubbed “Wedgie” for its wedge-shaped form. You could almost imagine Mr Knutzen sitting on its verandah, which also happens to be supported by three rustic poles, surrounded by dense bush and no doubt the continual sound of tūī chirps and kererū whooshes.

But this man, Wedgie’s owner, was not to stay “man alone” for long. The bach became a home for the new couple. Kids and familial responsibilities followed. Spacecraft soon got the call-up. The new brief: more space! Enter Sidecar, an extra bedroom, living space, office and bathroom connected to the original house by way of a short bridge. “Our approach is always to try first to keep an existing building fabric intact, for cost reasons,” says Robertson of the decision to interrupt the original dwelling as little as possible. Clad in dark steel to contrast with Wedgie’s macrocarpa, Sidecar is “like a sibling or cousin of the other building – related, but with a different character”, says Gittos.

As you enter the property from the south, Wedgie is immediately in front of you. You drive straight into its carport, and the form of the house rises up and away from you to its north-facing apex. Sidecar is immediately to your right. The roofline of Sidecar rises to the south, towards the driveway and in opposition to Wedgie. This creates a sculptural rhythm to the forms and, from inside, provides views in different directions.

From the carport, you can wander left around the verandah of Wedgie and into the original living area with its glass doors opening up to covered decks, or enter through a door into the pantry and then the kitchen; up a short staircase there are two airy bedrooms, a bathroom and another sheltered deck.

There’s also a door at the front of Sidecar; inside, a corridor connects its living room to the bathroom and bedroom, and to the bridge into the original house. Sidecar’s hallway is capped with an elegant timber-framed skylight, contrasting with the simplicity of the building’s black steel exterior. One of the skylight windows opens for ventilation. (This is reached from a loft accessed via a ladder in the living space: there’s a computer up here and views down the driveway towards the water.)

There are other contrasts too. Unlike Wedgie, Sidecar is carpeted and features a fireplace. Robertson says if Wedgie is spring, summer and autumn, thanks to its wrap-around decks and easy, casual flow between indoors and out, then “Sidecar is winter”. This is where you retreat if you’re here in the cooler months – it replaces the space that Wedgie’s verandahs serve in more temperate weather. In the bathroom – a cave of sorts – a sculptural bath delivers another moment of refinement, positioned next to a full-height window offering an intimate view of the surrounding bush.

An attentiveness to local conditions is in some ways a platitude of architecture. But hearing Gittos and Robertson speak about the bush, the kererū, the warmth, the sometimes-humid dampness of this location and its conditions, you get a sense of what real attentiveness means, and how it creates an architecture of place. It’s not about a specific style, or even a particular budget (here, simple “chunky poles”, to use Gittos’ phrase, coexist with loftier moments in the form of tricky window placement and skylights.) Instead it’s more about a closeness of looking and feeling by architects who have structured their practice to allow for that close looking.

Thinking about this house, I’ve had in my mind an image: an adjusted version of Mr “Man Alone” Knutzen and his Piha cabin. There’s a verandah of a simple hut, roof supported by three uncomplicated poles. Parents sit there. Kids, however, beat the camera’s shutter, reduced to a blur as they run. The house is surrounded by bush. Smoke rises from the roofline as the home fire burns, the smell of smoke mingling with the mānuka-scented air.

One gets the sense it’s an image like this that architects such as Spacecraft have had in mind as they unpretentiously craft a new tradition, project by project. 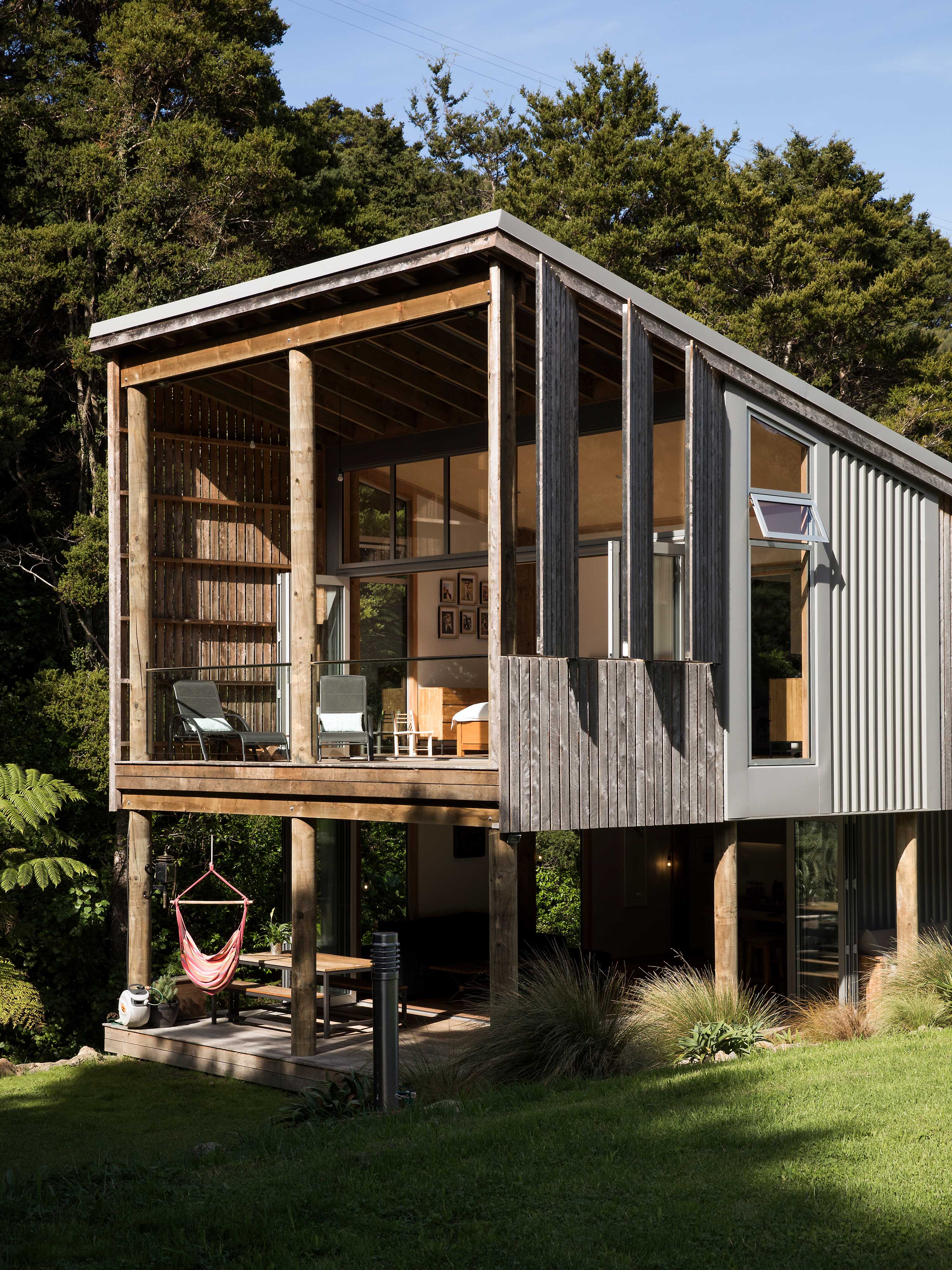 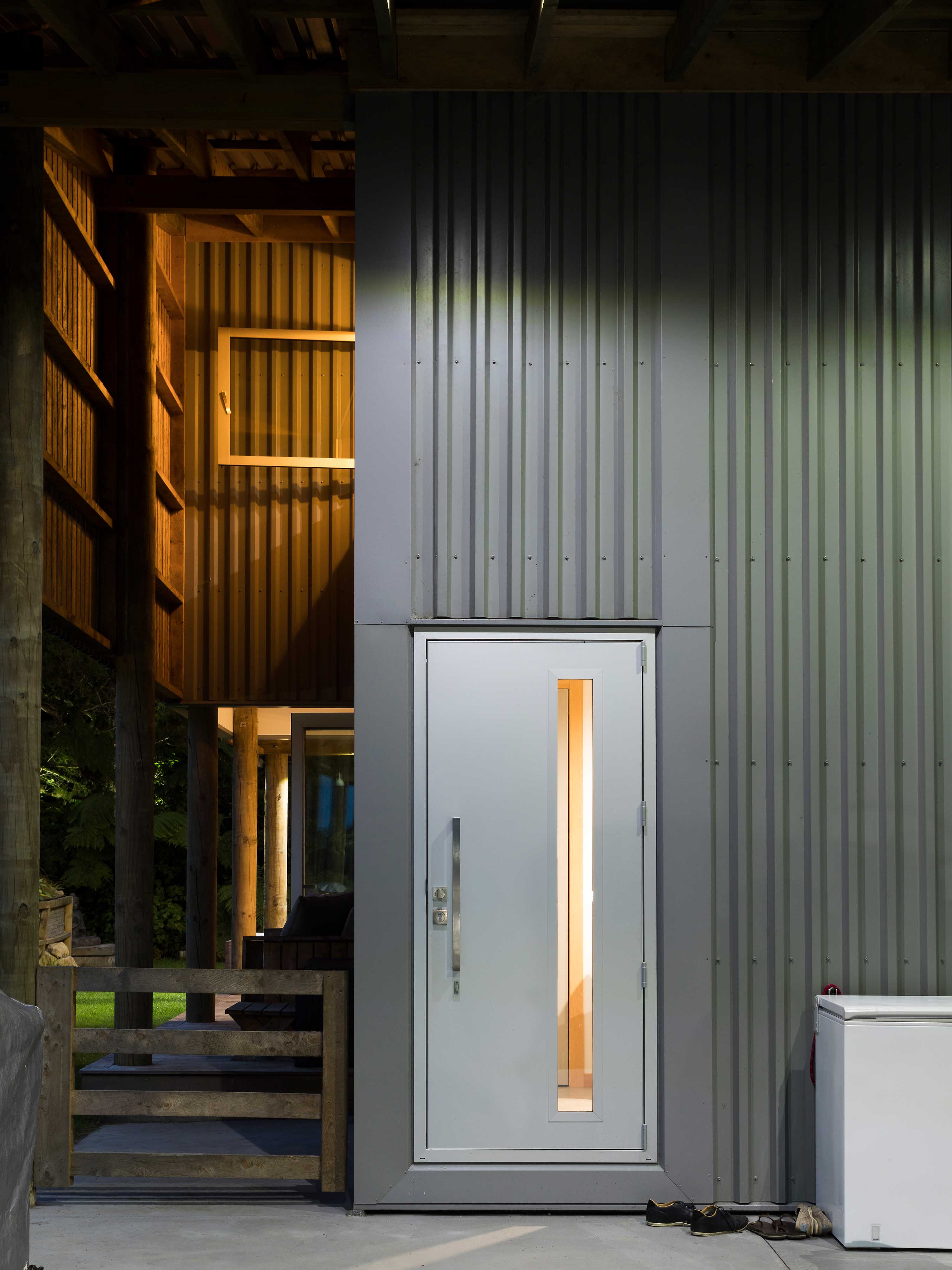 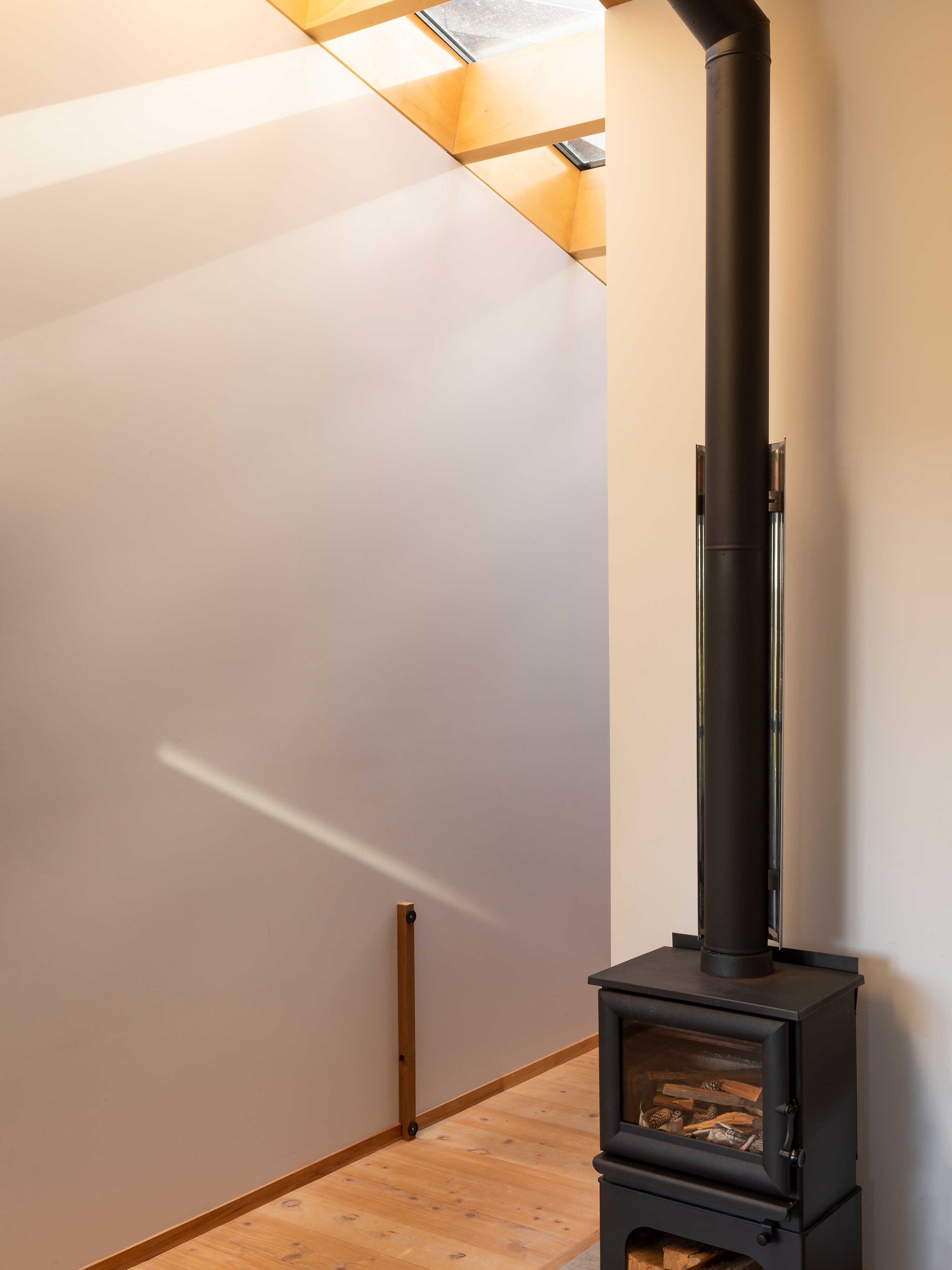 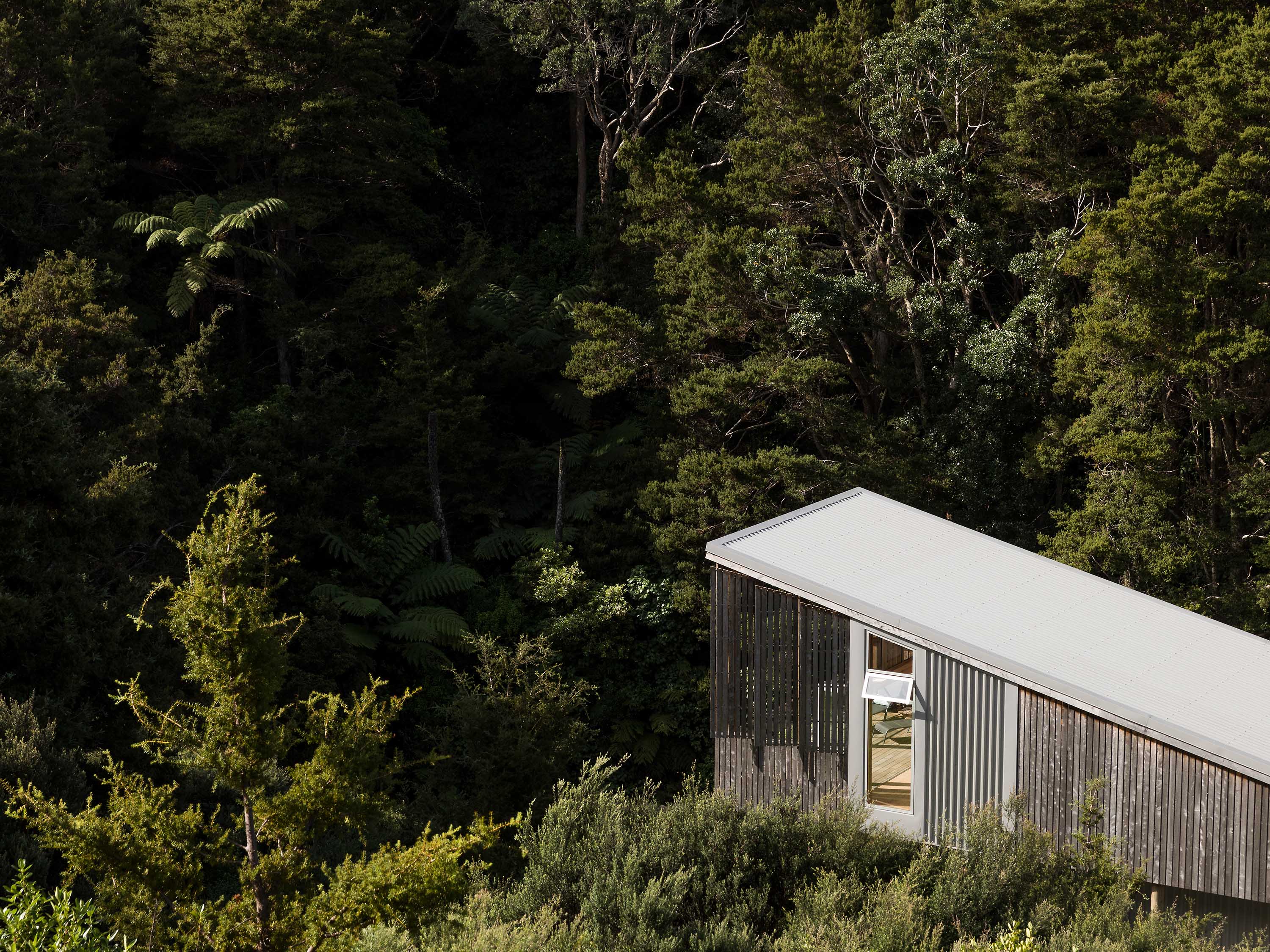 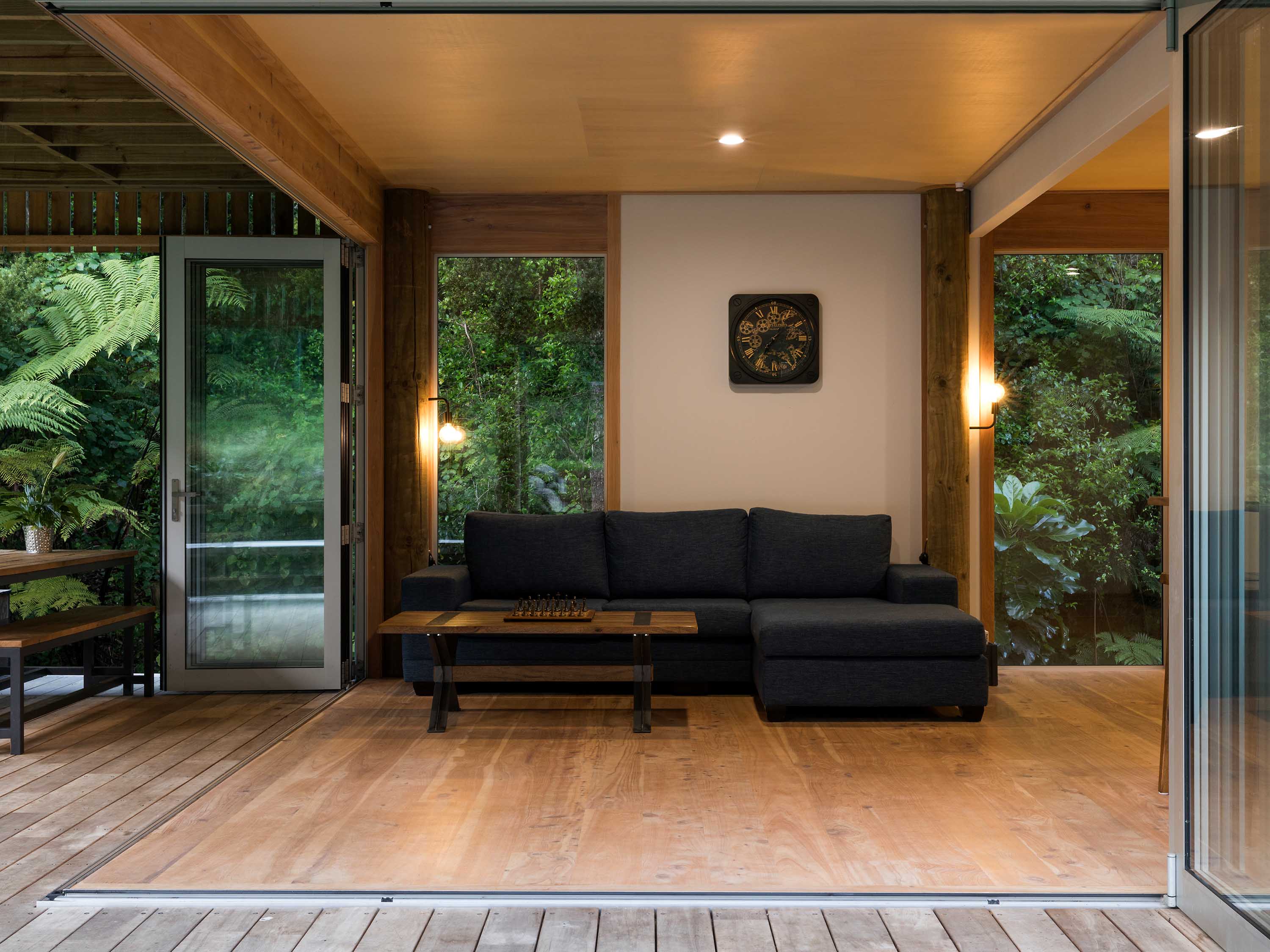 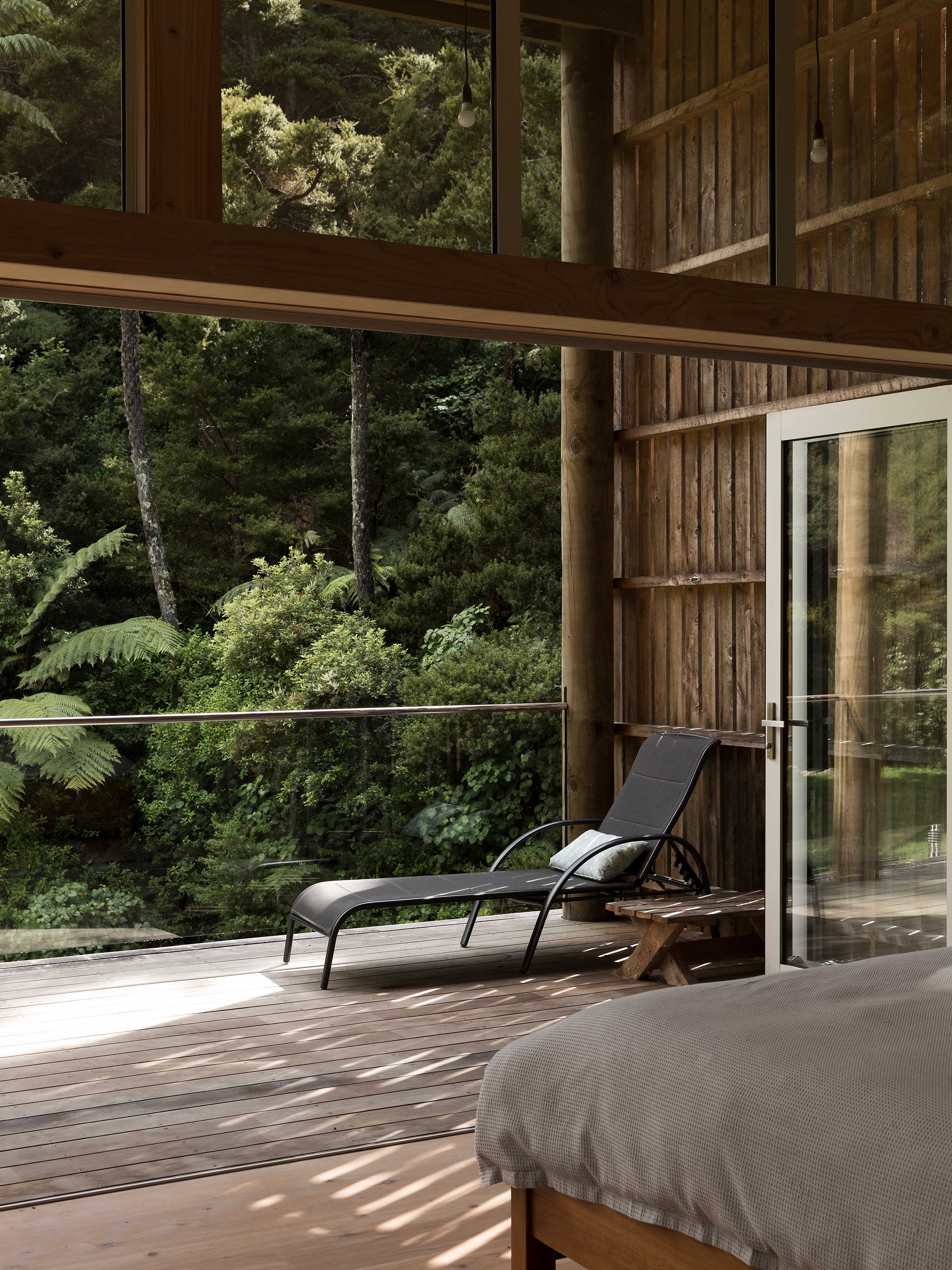 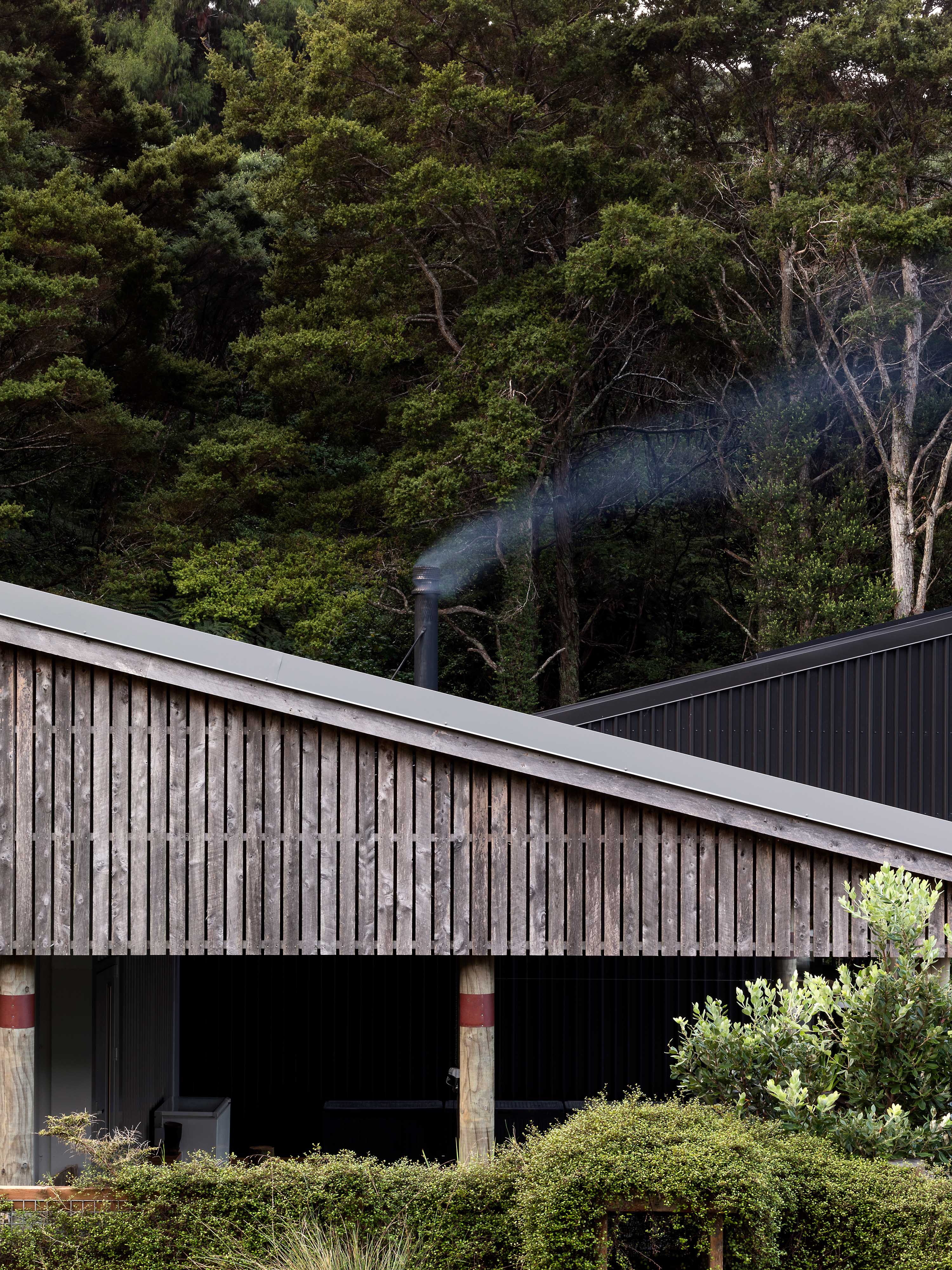 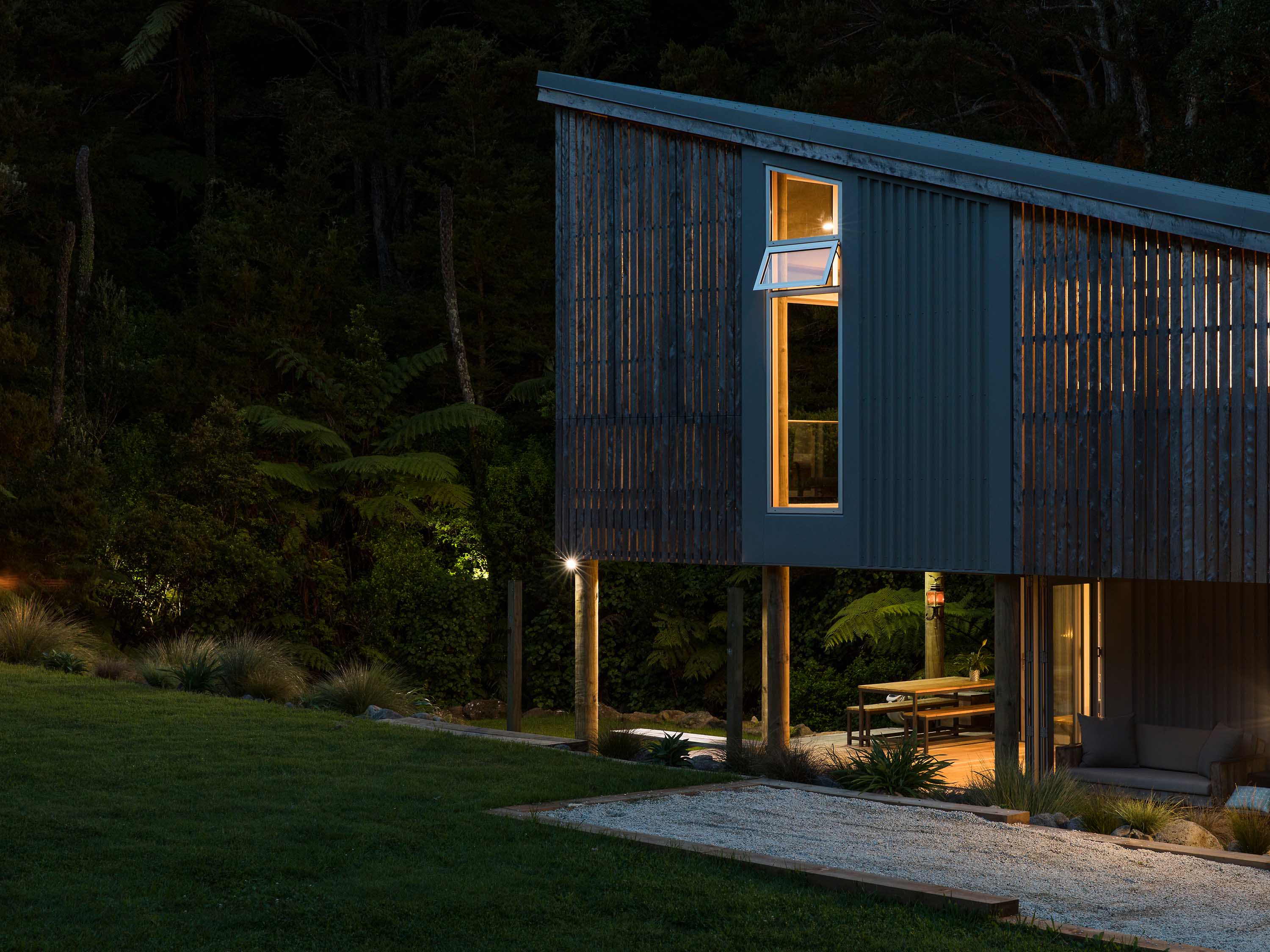 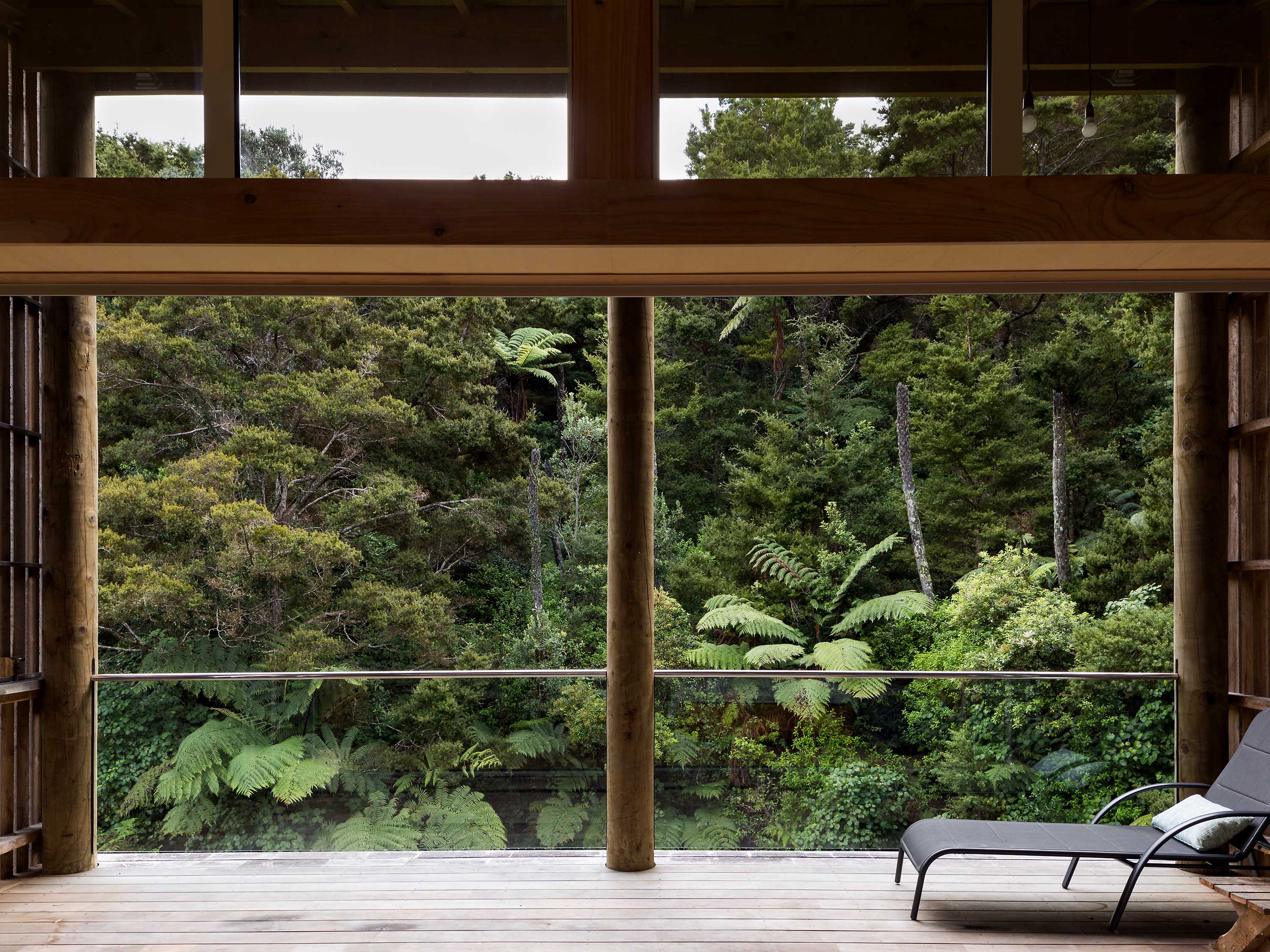 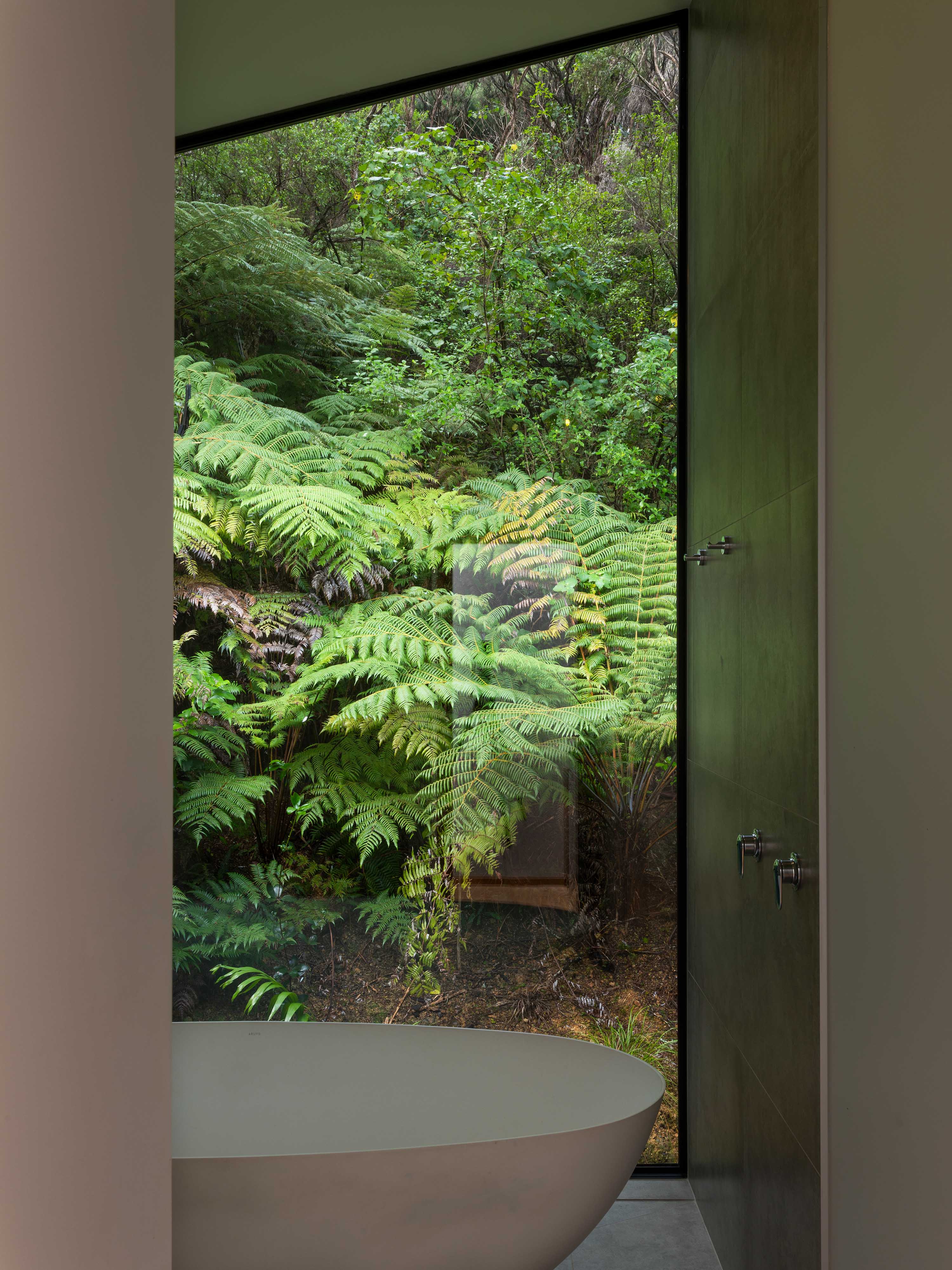 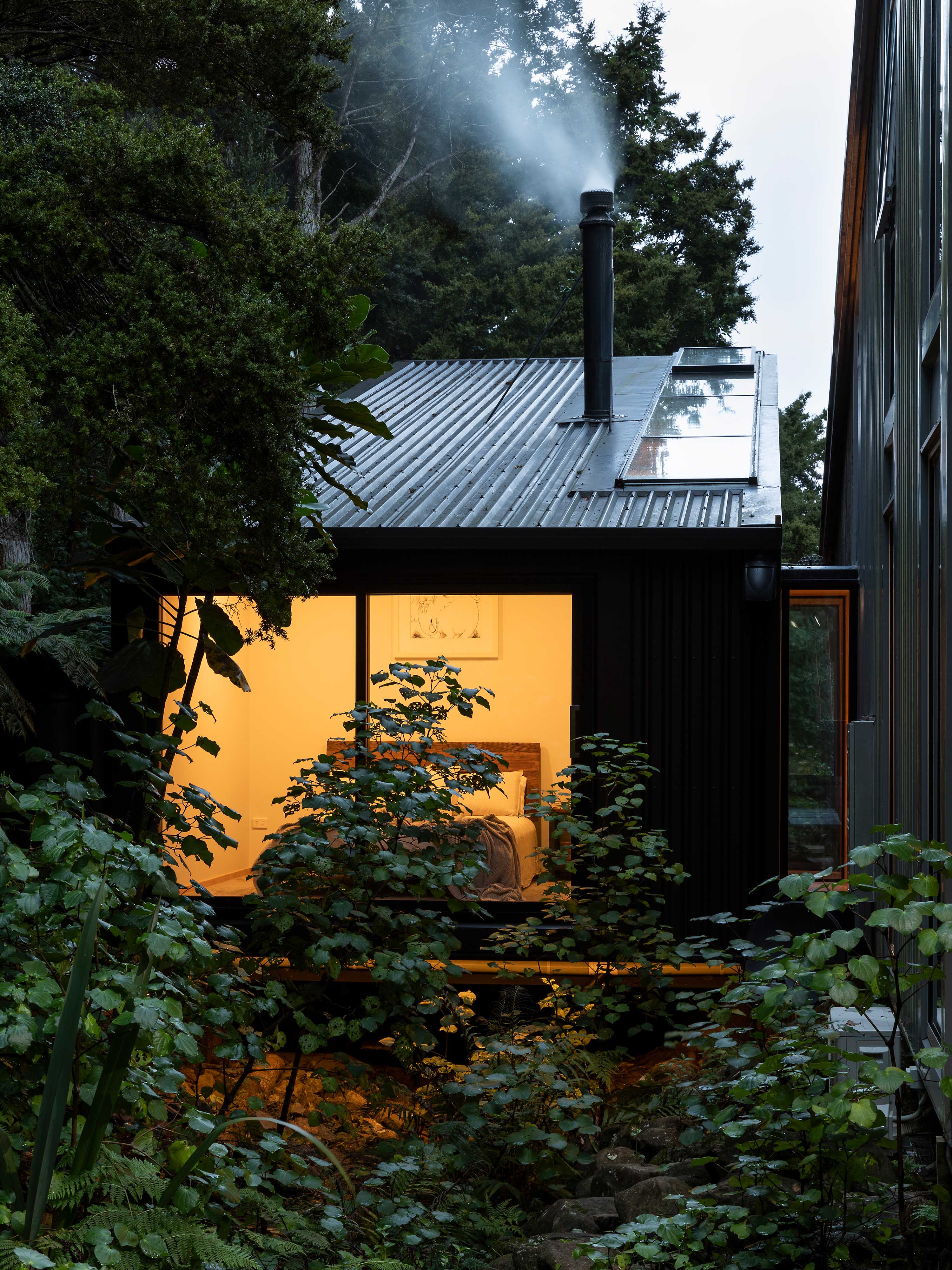 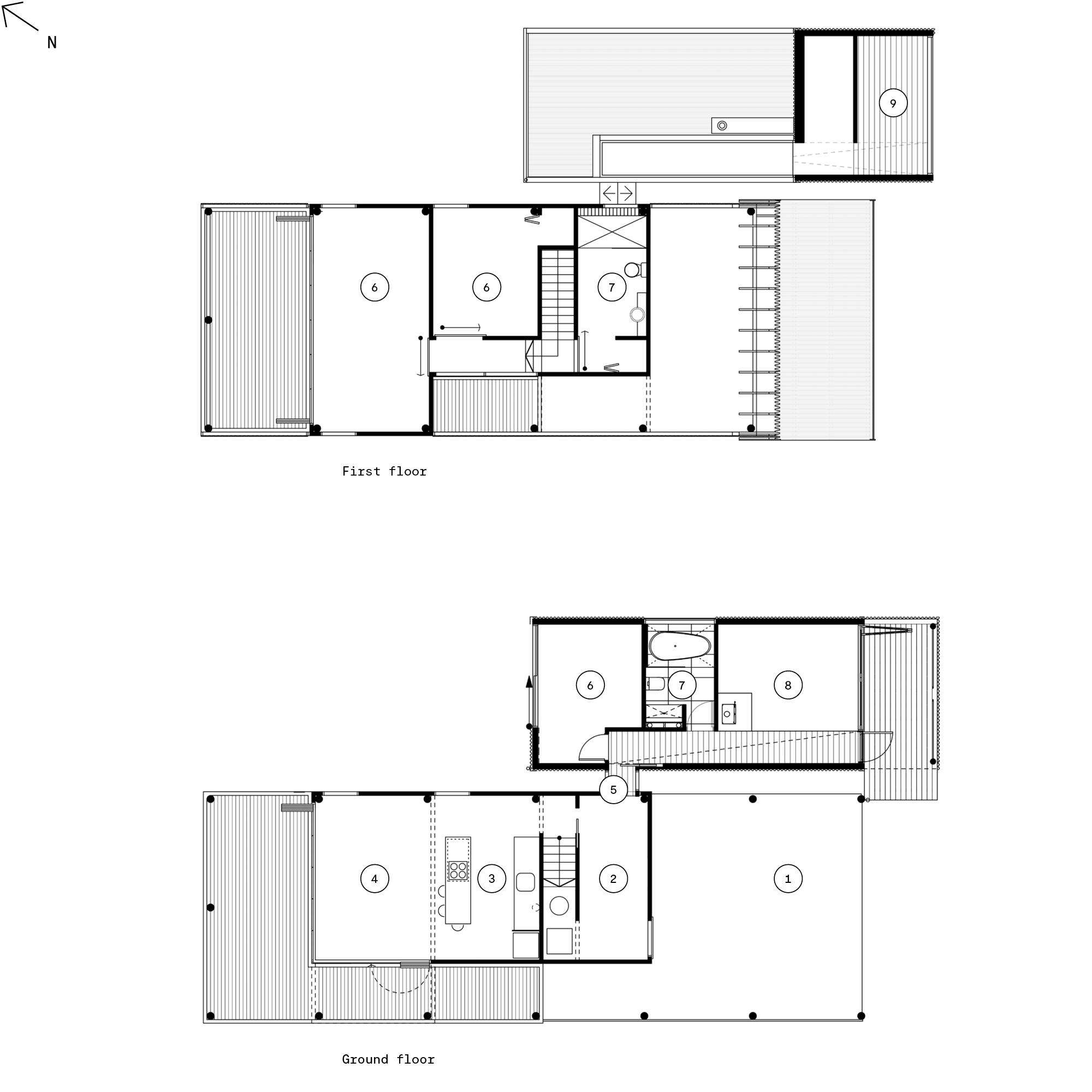