Natalie Parke and Dom Glamuzina challenge expectations with a compact bach on the hill at Tairua. 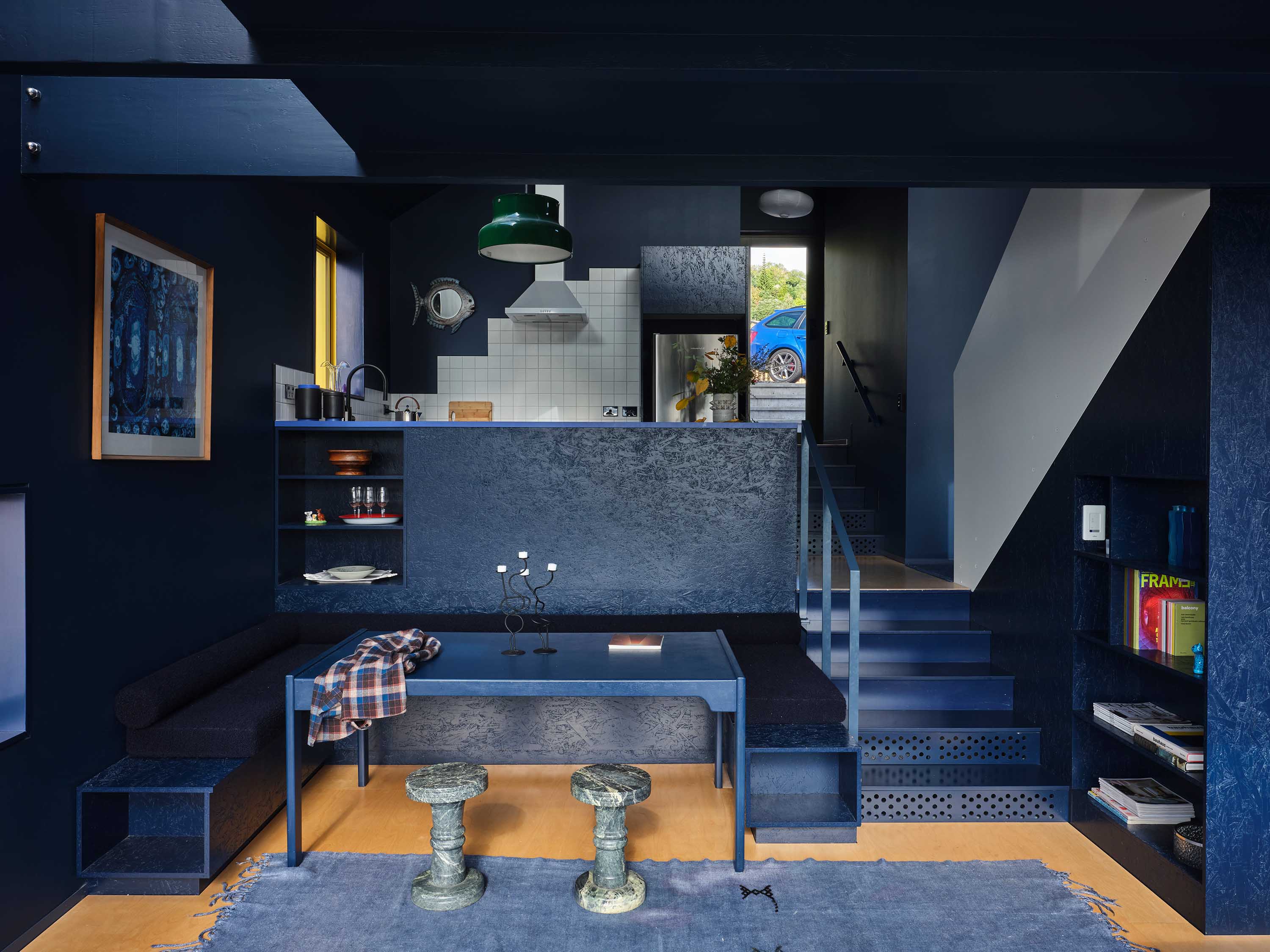 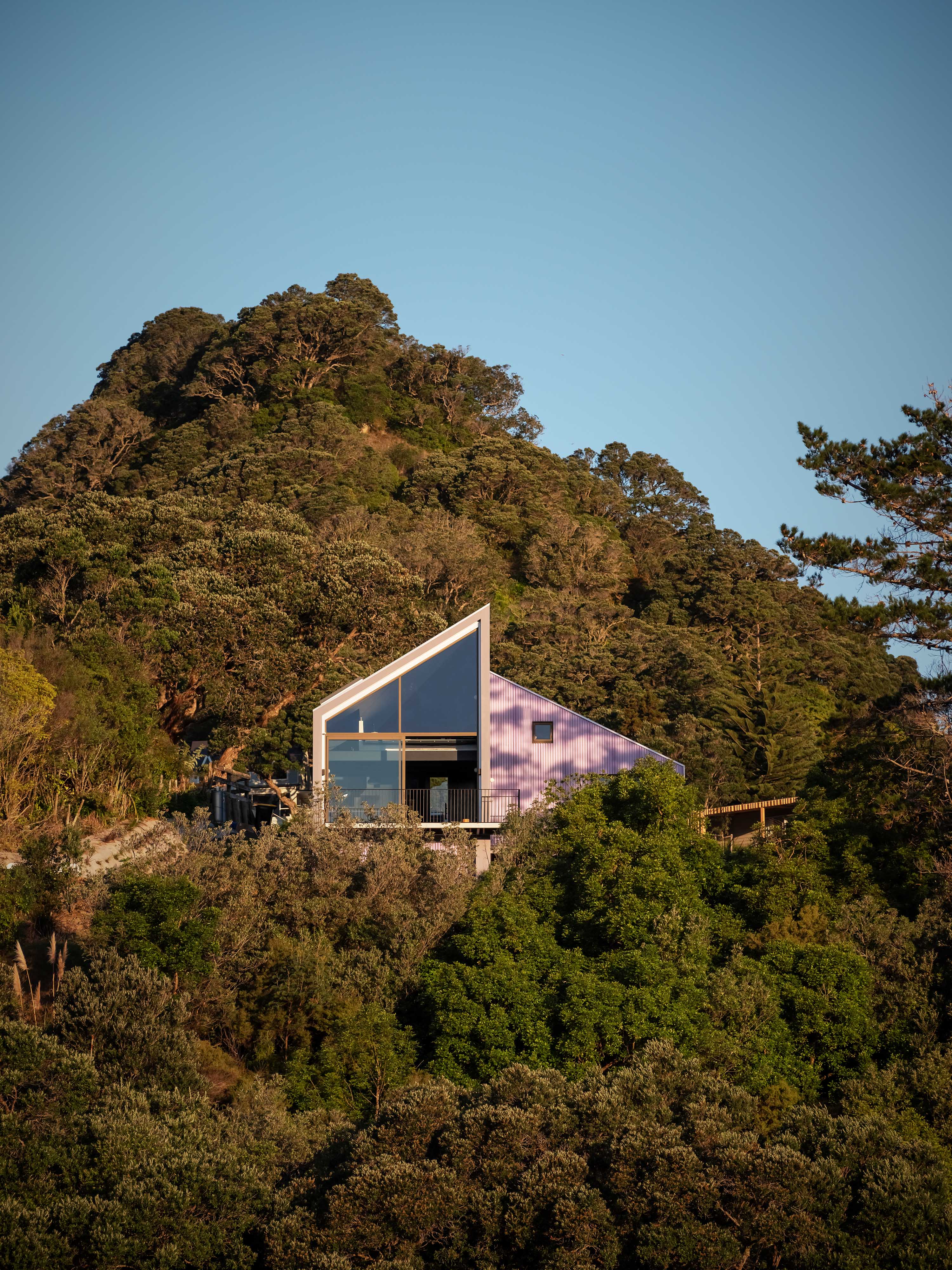 If you are lucky enough to be on the Coromandel Peninsula this summer and driving along Ocean Beach Road in Tairua, look up to Mount Paku, which sits between the stunning stretch of white sand that is Ocean Beach and a wide-mouthed sandy estuary. On the hill, you’ll see a small A-frame in a shade of lilac, and you’ll wonder: what colour is that?

You might describe it as purple or you might describe it as pink, though at certain times of the day it looks silver. Most people in Tairua have seen it, though not everyone approves. “It cracks me up,” says owner Natalie Parke, a designer who has worked with architect Dom Glamuzina on several houses in recent years, including a couple of her own. “I’ve talked to all sorts of people who have seen the house, and some say, ‘Oh it’s so cool, I love that house.’ And others say, ‘Oh. You made that house? It’s horrible.’ But they all ask what colour it is.”

Natalie and husband Gerry, an artist, bought the site in 2014, shortly after returning from a stint overseas, and seeking a bolt hole out of Tāmaki Makaurau where they could retreat with their young family. The section had been on the market a while: it’s treacherously steep and was surrounded by tall, old pine trees. When they chopped down the trees, the view emerged – a magnificent sweep stretching from the estuary and Tairua on one side, and Pacific on the other, rolling over the white sand of Ocean Beach.

Natalie didn’t want anything big and she was enthused about the idea of an A-frame or ski chalet. The idea stuck and somewhere along the line Glamuzina looked to modernist beach houses designed by New York architects at Fire Island in the 1960s, where steeply pitched roofs sheltered complex, layered interiors, usually with big expanses of glass at either end. “I’ve always been interested in how the roof form defines the space inside,” says Glamuzina. “You can have quite a small footprint but use the volume inside the roof to provide changes in scale.”

You approach the house down a driveway at the end of a suburban cul-de-sac, and the hill falls away down the slope. It’s a steeply pitched roof with two wings. In essence, the main space is one big volume housing the living area on two levels – you come into the kitchen, then down a couple of stairs into the living and dining areas, with a mezzanine above. A smaller, slightly offset wing housing two bedrooms and a bathroom. Although the roof is steeply pitched, it’s not quite an A-frame. “It was difficult with the angle of the walls,” says Glamuzina, “so eventually it became more of a hyper-angular shed form, and how we could create a tight, stacked space.”

The spaces are wound but not tight, and there are nooks and crannies throughout to escape to. The mezzanine above the living room leads out onto netting above the main living space; the second bedroom has double bunks that lead up to a third bunk high up, with a secret window overlooking the living areas. Out the front, suspended in the view is a narrow balcony that tucks around the corner, creating what Glamuzina describes as a “smoker’s deck”: since you can’t be seen from the living areas and it doesn’t connect down to the other deck. It’s reached via a door from the living area.

It’s hard to ignore the view, since it’s basically everywhere. Sitting high on a steep hill, it would’ve been a brave person who would deliberately shut down the big view. Here, the A helps as a focus point – it creates an internal volume that funnels down to frame the view, with plenty of wall space for containment. 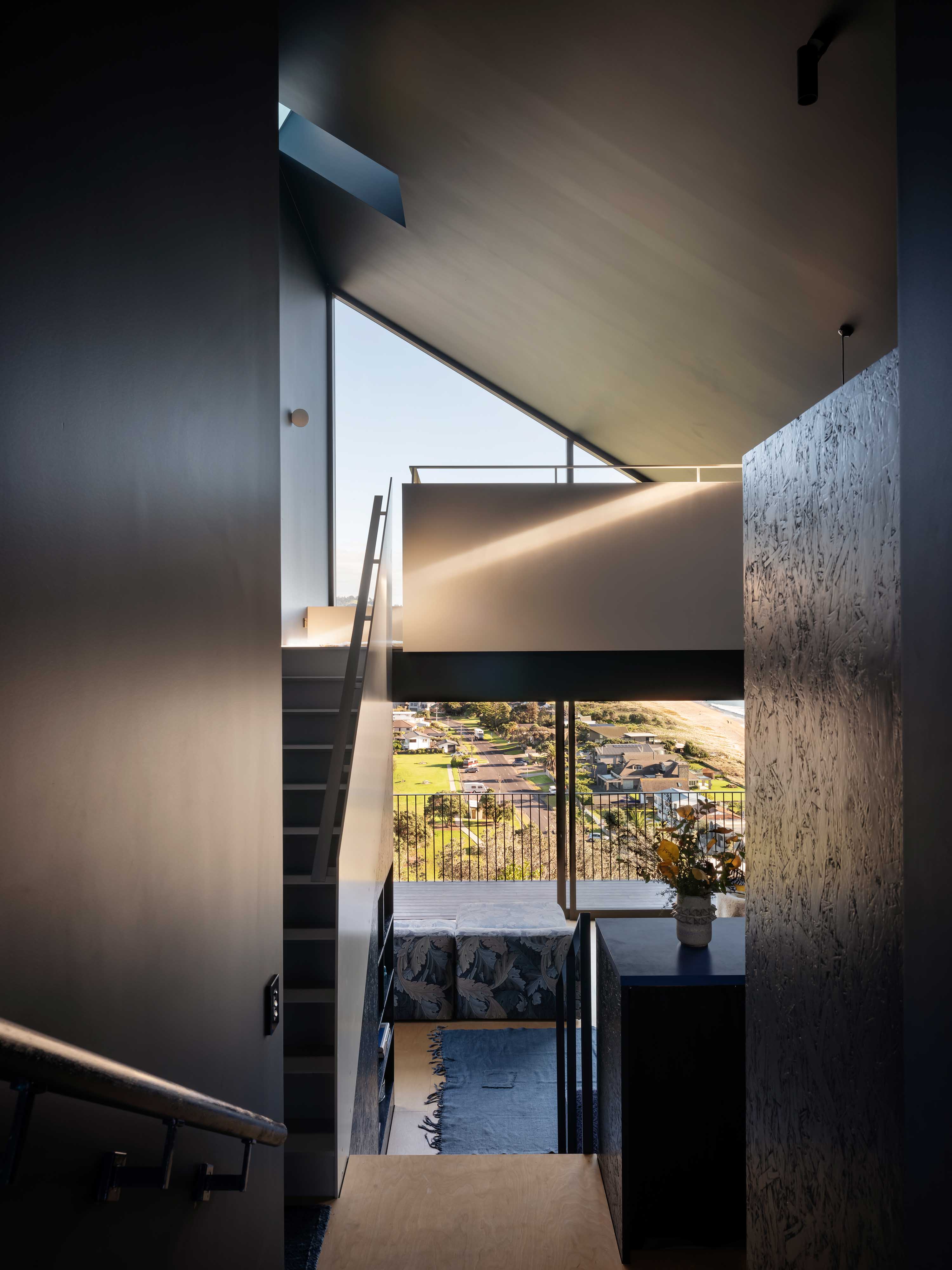 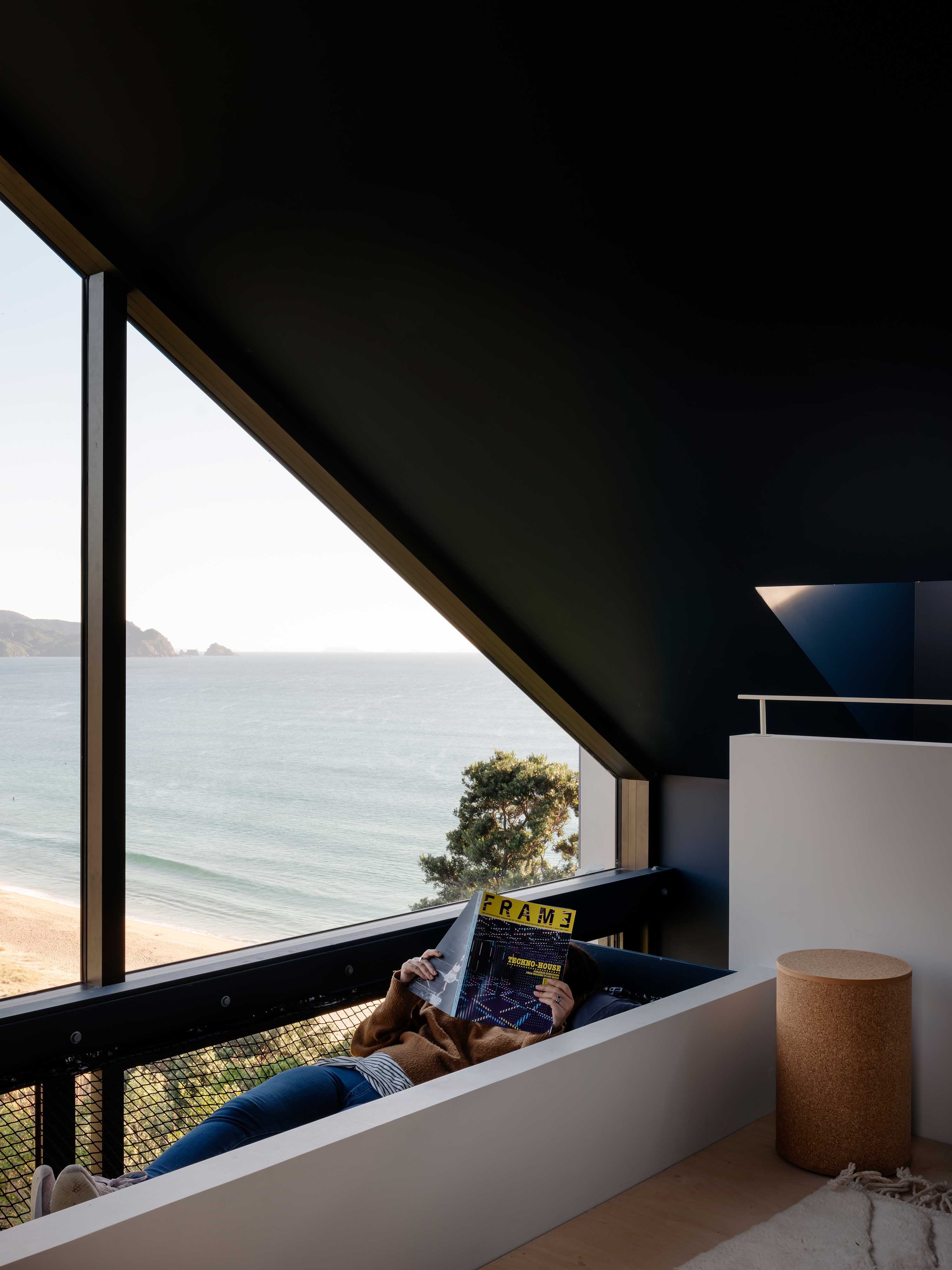 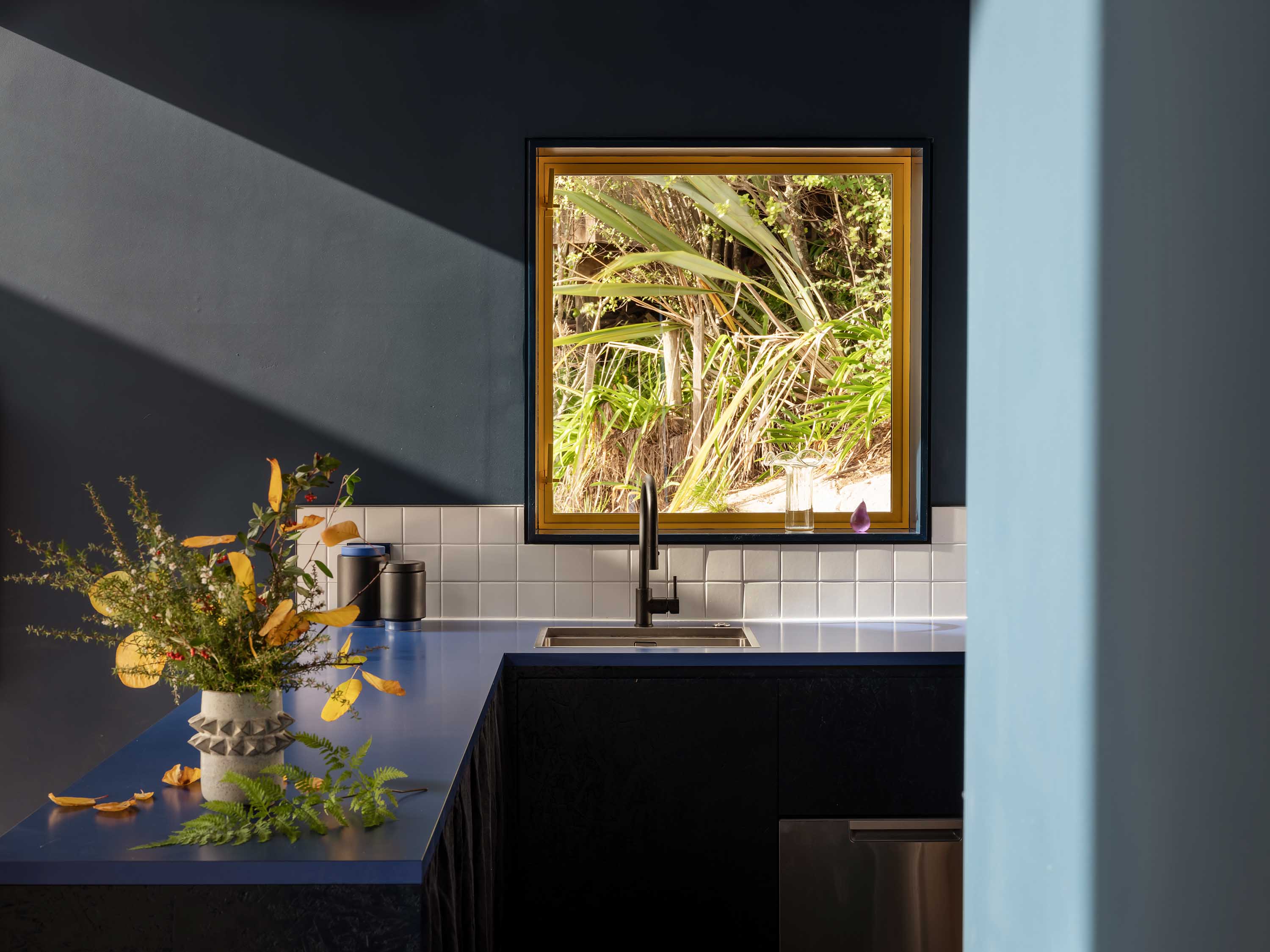 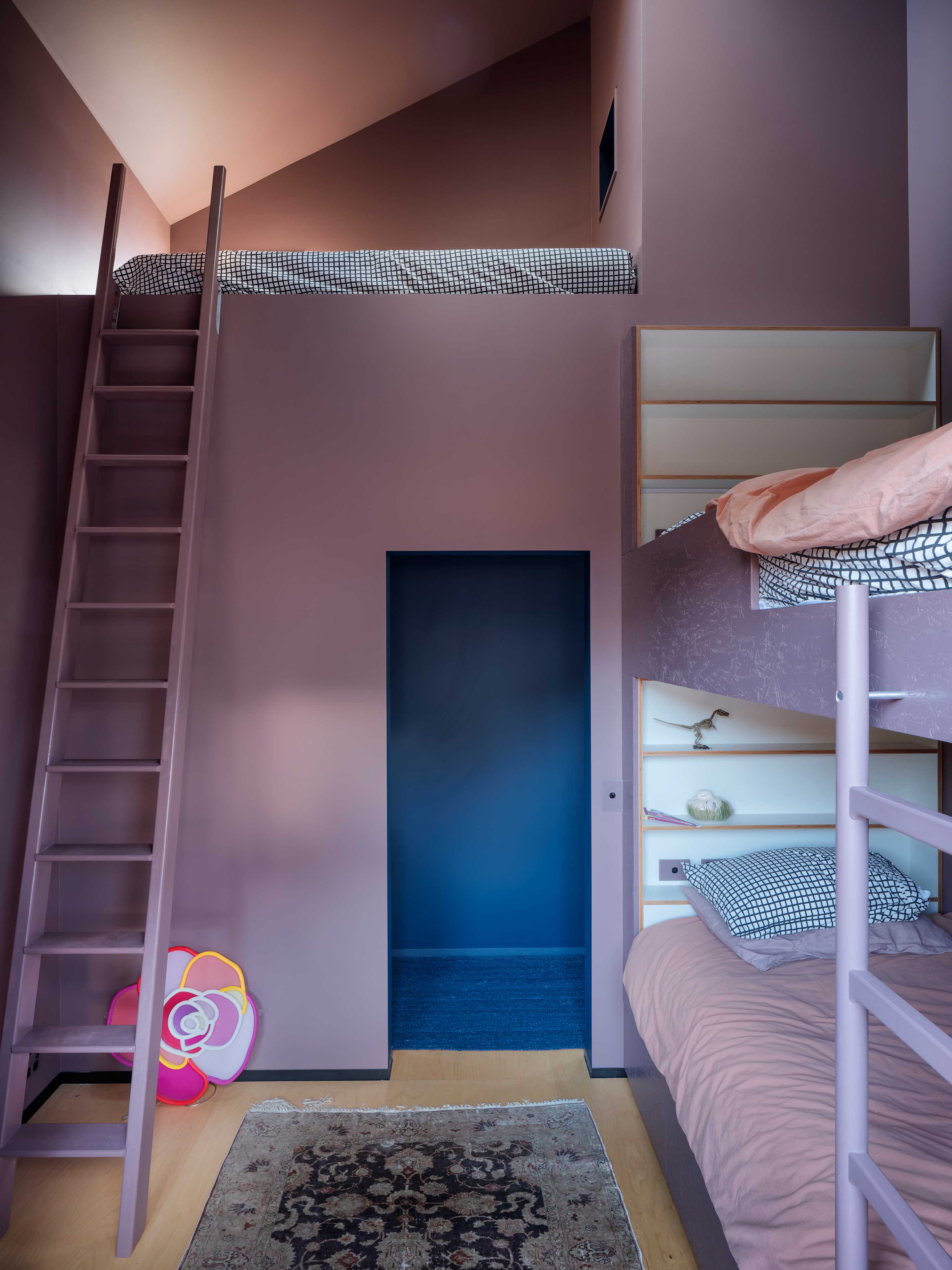 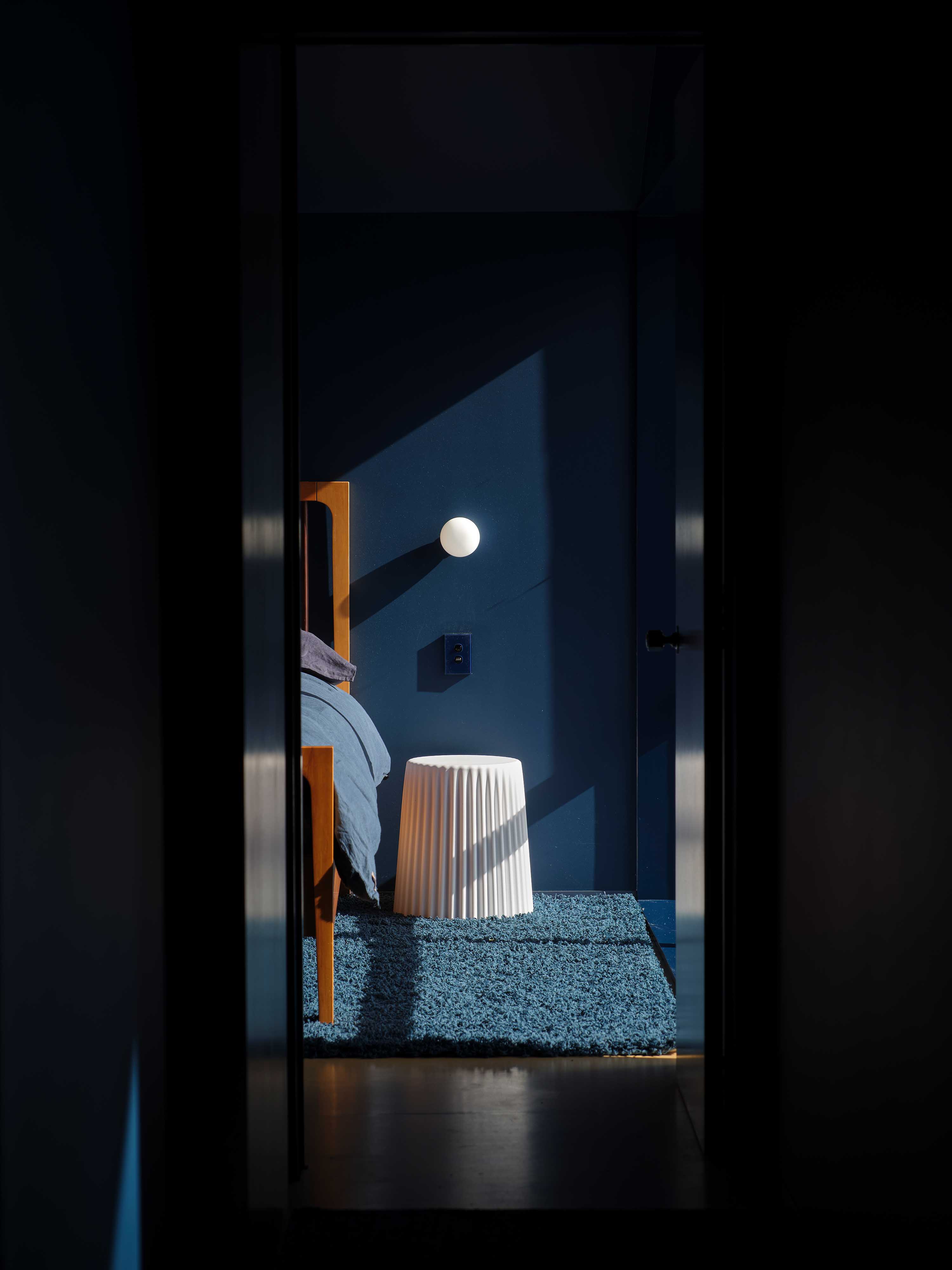 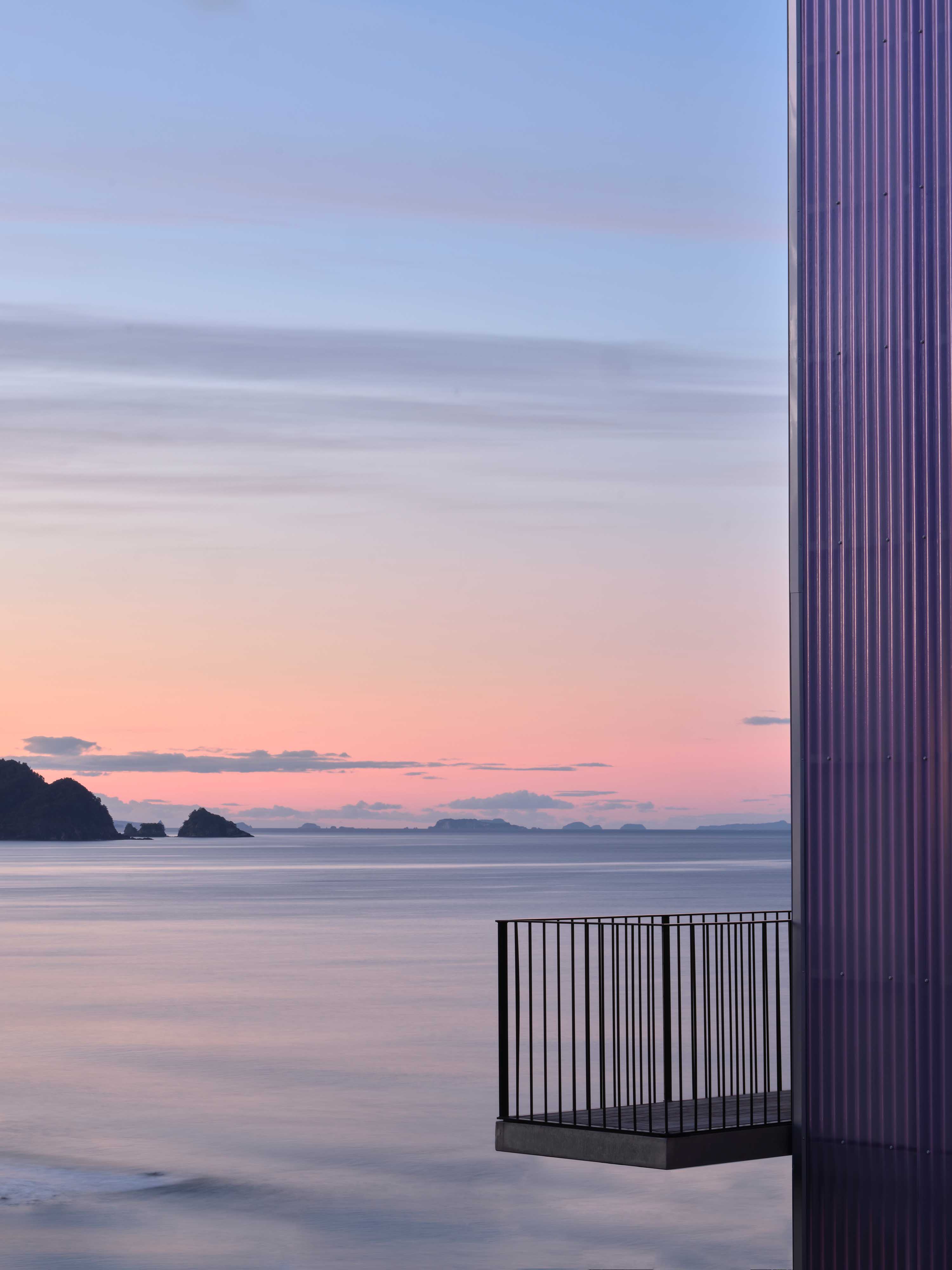 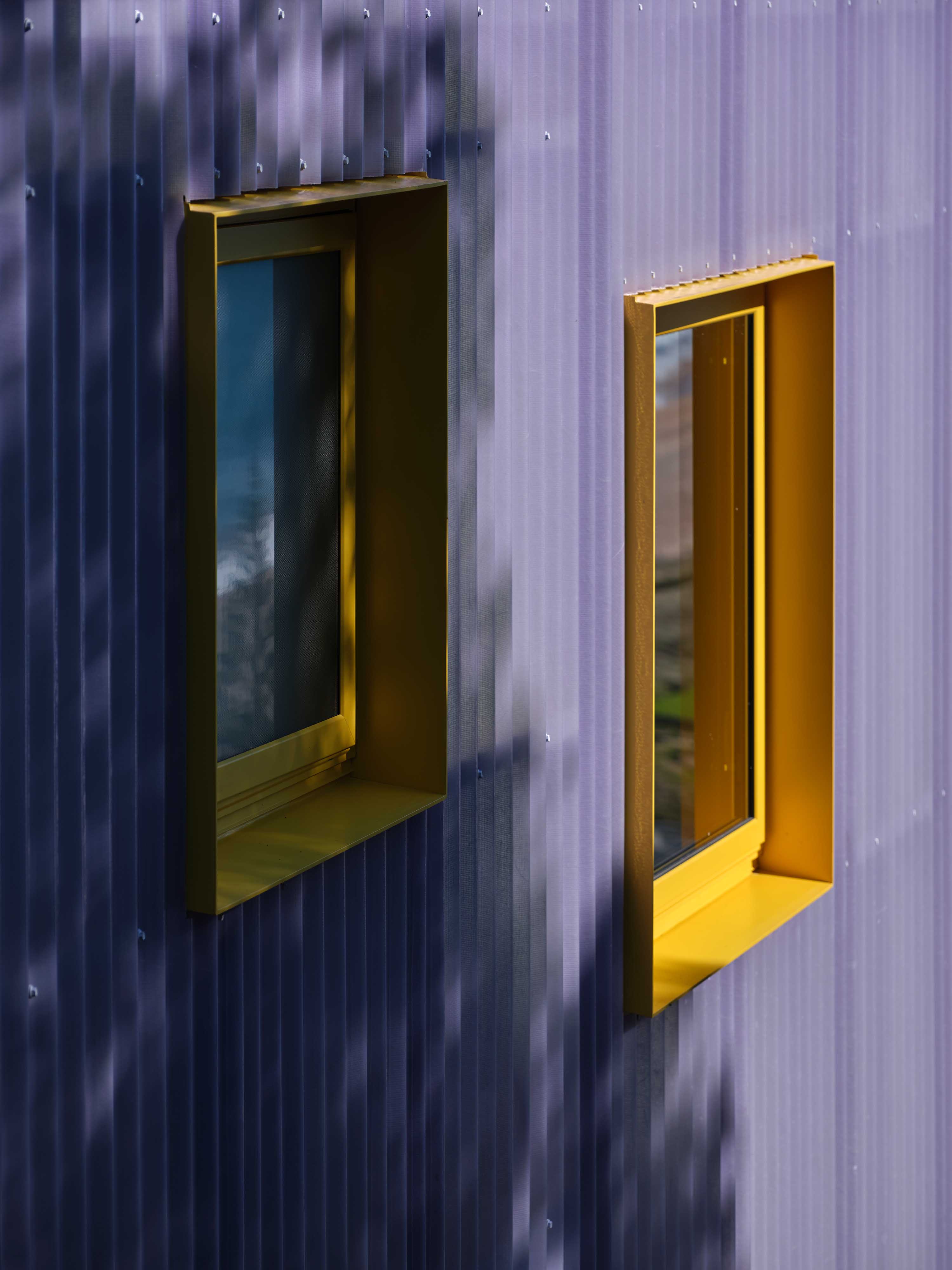 The house went through a number of iterations – its cladding changed multiple times throughout a design process that started in 2015. At one point, it took on a camouflage look, before settling down to purple corrugated fibreglass cladding paired with, yes, window frames in bright yellow or bronze. “We really wanted it to be relentless,” says Glamuzina. “One material, one surface, one wrapper.”

Sometimes it looks purple, sometimes silver. At other times of the day you can clearly see the bones of the house through the cladding if the light hits it right. While Natalie admits she didn’t expect it to be so “hard-core” purple, she’s delighted by it. From a distance it looks monolithic and as you get up close it pixelates, so you can see the shards in it. “When you get up close it’s really different – that’s the reason the colour changes so much,” she says. “It has a depth of field in the paints and fibreglass itself, a kind of light play.”

It wasn’t an easy build. Both Natalie and Glamuzina were keen to build with structural insulated panels (SIPs) because the technology seemed suited to the long expanses of roof and wall. Without going into too much detail, the Parkes had to change builders shortly after the foundations were laid, and then the company manufacturing the panels went into receivership. Natalie and the builders flew to Christchurch to retrieve the panels from a warehouse, then employed the company’s former engineer, now out of a job, to oversee the work.

Once on site, the SIPs proved a nightmare to erect, and there was no room for a crane. Steel bracing and the glass for big windows were hand-winched in. Because of the steepness of the site and distance from the road, an enormous amount of planning had to go into ensuring there were enough people on site, which was prohibitively expensive. “We were sold a concept that included the panels being cut into the correct size and shape in the factory that would then be assembled like Lego,” says Parke, “but they didn’t actually have that capacity.” Instead, a team of six to eight builders spent six months putting them together. Natalie describes the builders, CTL Construction, as “amazing. We couldn’t have built the place without their incredible technical understanding.”

Possibly, for that reason, and more broadly because of its function as a retreat and a reset from urban life, Natalie wanted the interior of the house to be calm. Where for most people that might mean neutrals, she opted for a deep navy, offset with pure white on the mezzanine and purple in a bedroom. “We just needed to walk into the space and not have any overt stimulation,” she says. “You come in and it wraps around you, rather than being in your face.”

Colour aside, Glamuzina describes the house as ‘lo-fi”. The kitchen cabinetry is Strandboard painted blue to match the walls, with a blue laminate benchtop and simple linen covers below. In the bathroom, square white tiles match with recycled bathroom fittings. There’s simplicity, even austerity.

In the afternoons, you start to understand. As the sun lowers over the horizon, it reflects off the water below – especially at high tide. It bounces light in through the big front window and the interior transforms. The blue becomes all manner of different tones under the dancing light – sometimes, it even looks white. “It was a case study,” says Natalie. “It was always about how we might build differently and build better, how we might push the constructs a little. I could never convince my clients to do it – but I can do it myself.” 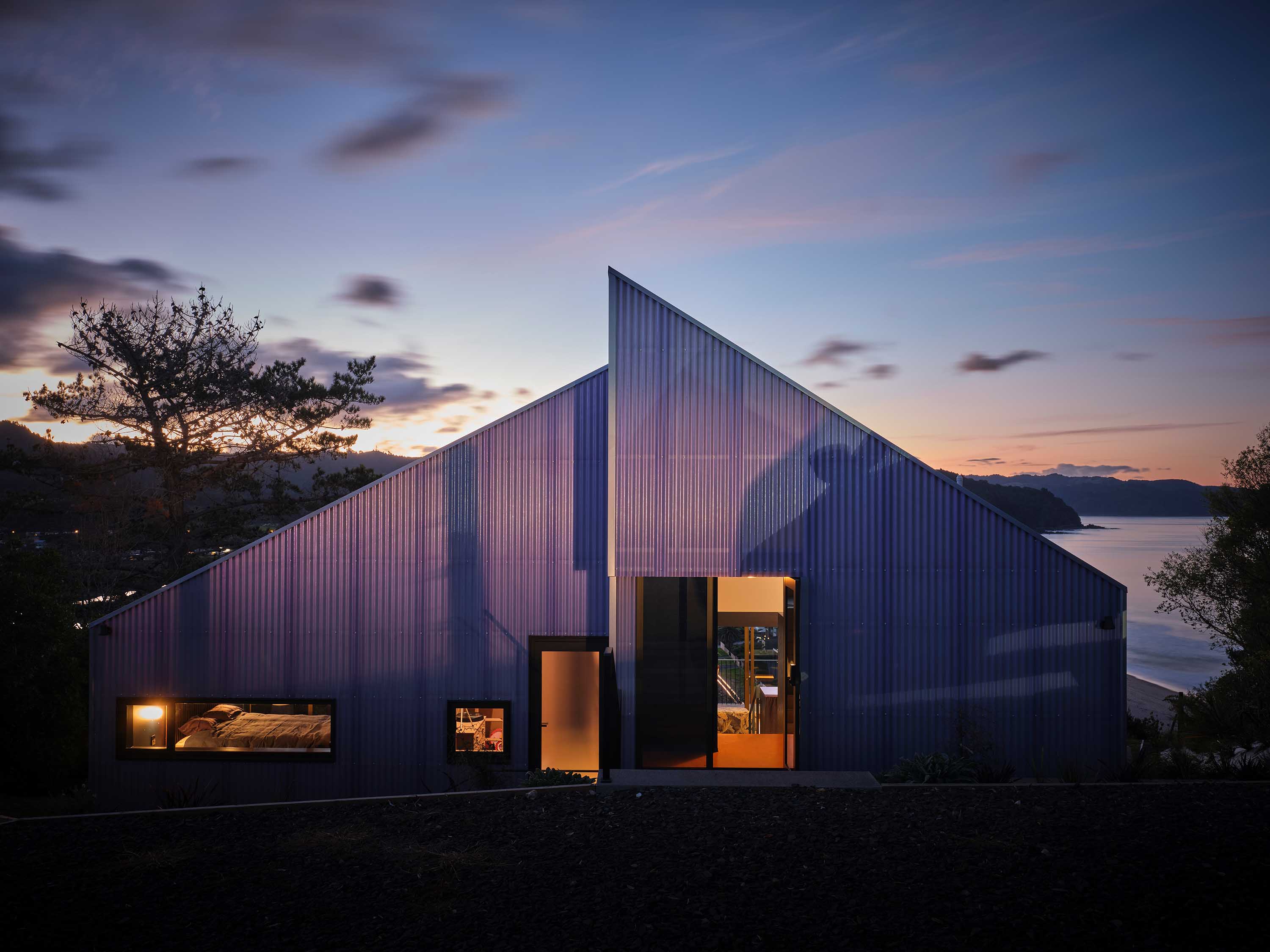 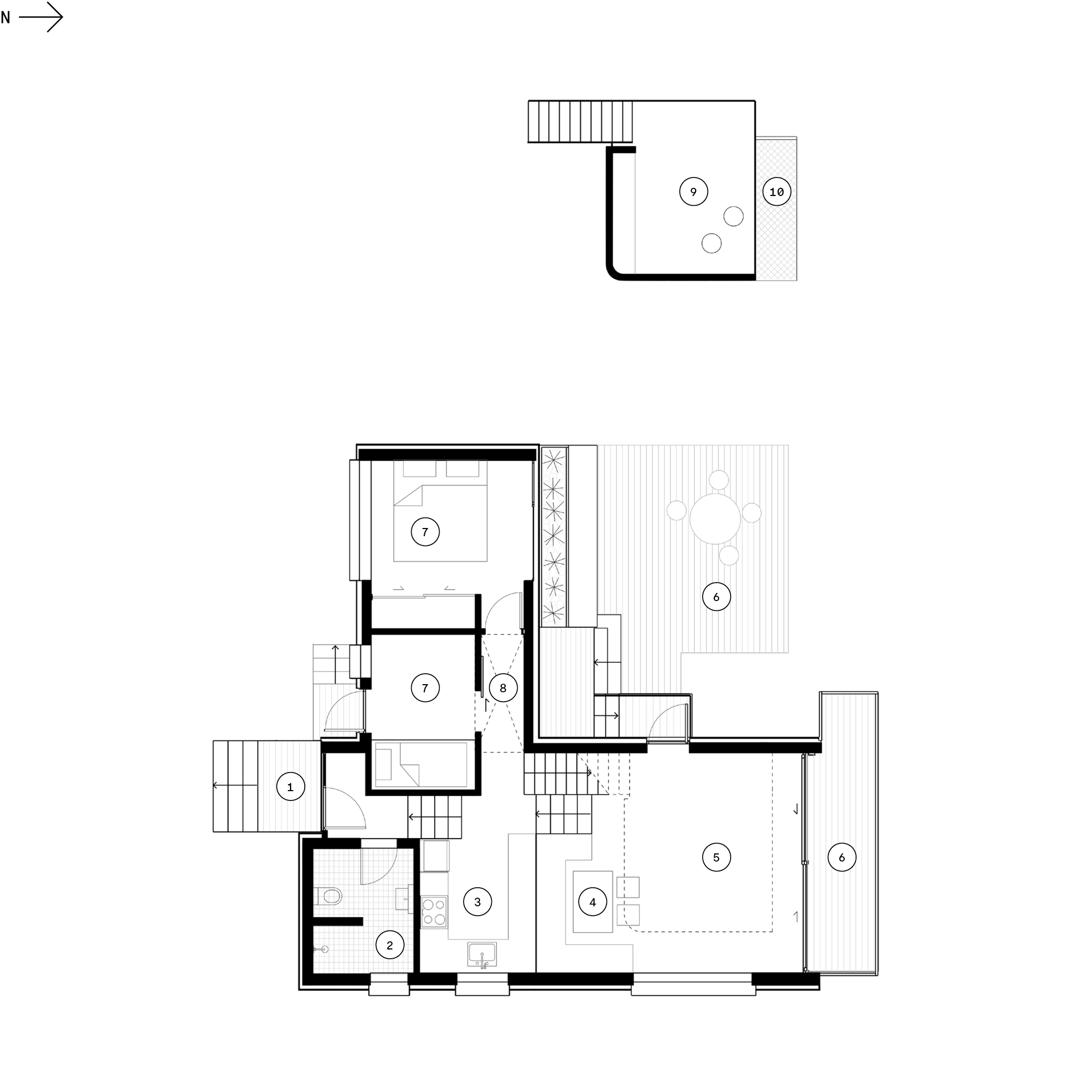