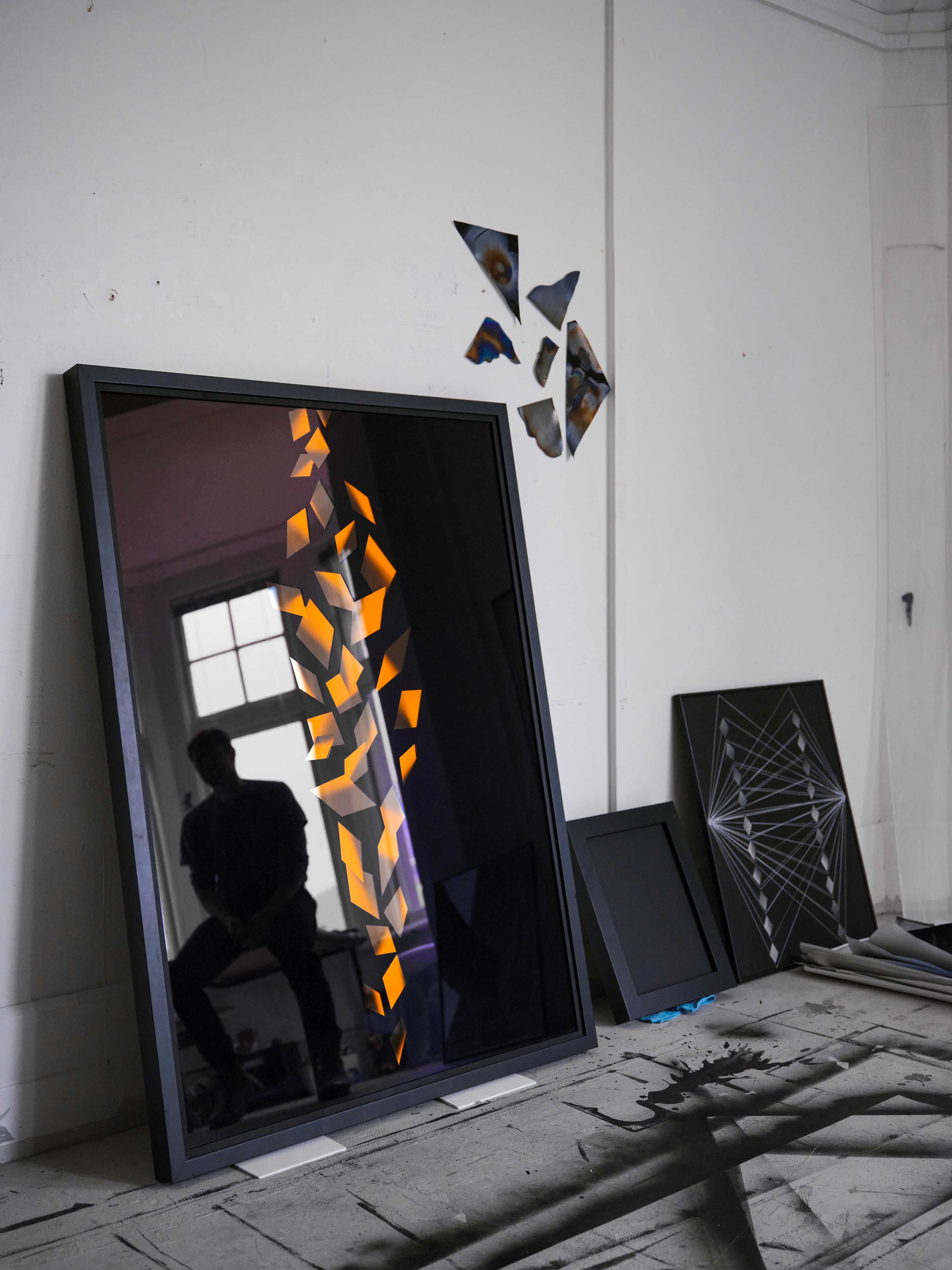 Beck’s abstracted work looks good, and has proved a hit with collectors.

Beck’s abstracted work looks good, and has proved a hit with collectors. 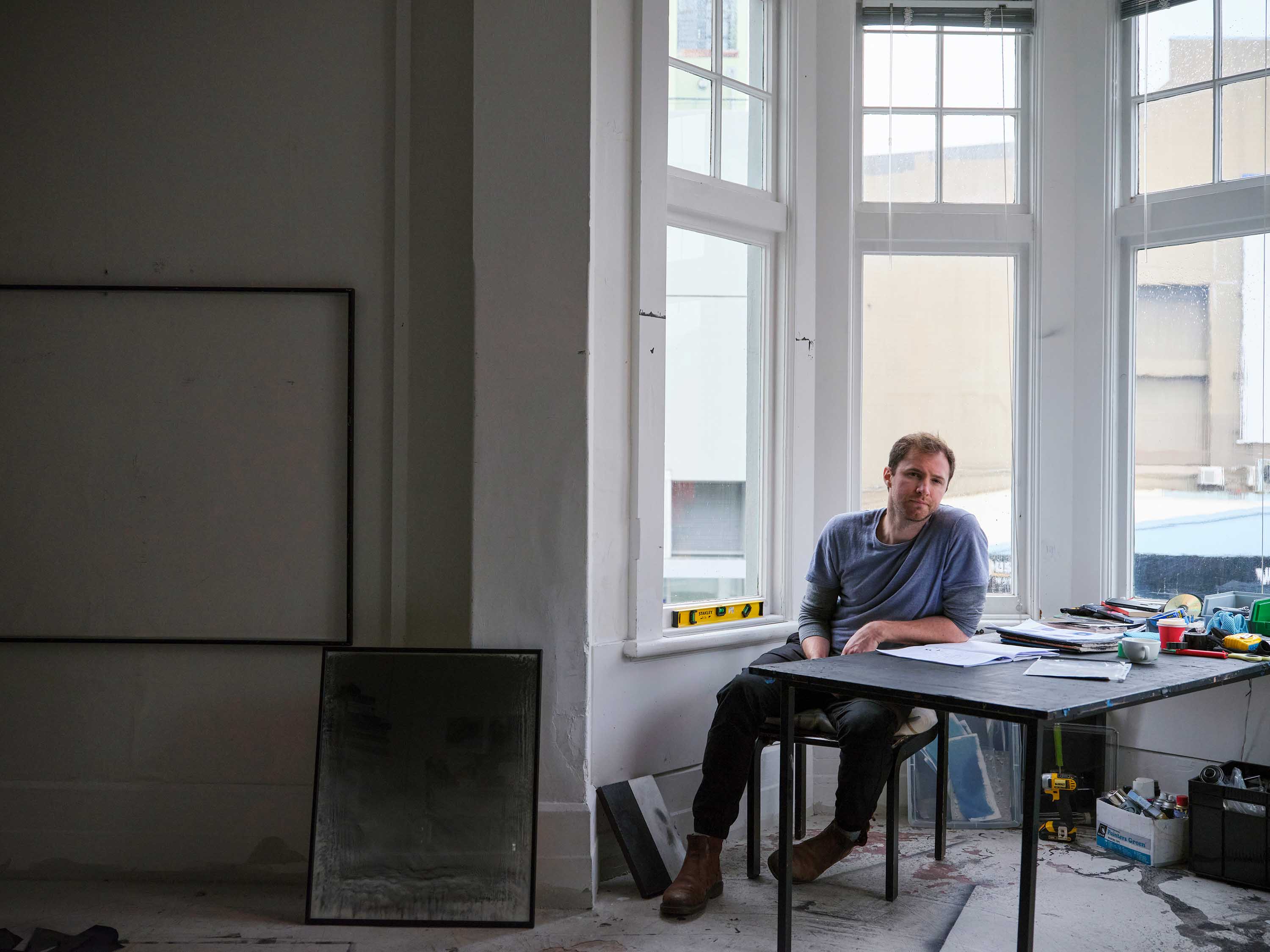 Beck in his Wellington studio.

Wellington artist Andrew Beck is lanky and clean cut. He dresses normcore. The 33-year-old lives in a cinder-block bedsit in Hataitai’s Park Mews — the village designed by Roger Walker in 1973 and famous for its iconic turrets and portholes. Beck’s crib is spartan, free of knick-knacks and clutter — just the books he is currently reading and the food he is about to eat. His studio is in town, in Marion Street, on the first floor of a charming art-deco building, near galleries, cafes, and boutiques. Walking past, I can always see him from the street, sitting in the bay window, but he can see me too. I never know whether he fancies himself to be a prisoner in the panopticon or the guard.

Beck makes photograms: cameraless photographs, produced by placing objects over photographic paper and exposing it to light, capturing the objects’ shadows in negative. Before cameras, photograms were used to make one-to-one-scale documents of cuttings of plants, lace, and the like. Early last century, modernist artists — including Christian Schad, Man Ray, László Moholy-Nagy, and our own Len Lye — experimented with them, shoring up their place in the avant-garde tradition.

Beck hybridises photograms with painting, sculpture, and installation. For his MFA show at Massey University’s Engine Room in 2011, he used the beams of light that poured in through the gallery’s skylights and onto its walls. Over the course of a week, he pinned up sheets of photographic paper and exposed them, always at 11:45am, capturing the light beams’ positions at that moment. After processing the sheets, he reinstalled them in the same spots. Visitors saw light passing through the space, coming in and out of alignment with the impressions indexed in the photograms, turning the gallery into some kind of sundial.

Beck creates his photograms using diverse techniques. Sometimes they are made using paper negatives; other times by bouncing light off sheets of glass at odd angles. He conceals them behind painted-glass masks and coloured glass. There’s a convoluted self-referential aspect: they look like diagrams illustrating the behaviour of light, while being created by exploiting the behaviour of light.

Beck’s aesthetic can be hard to place. “I began by referencing geometric abstract art — Malevich, Rodchenko — but now I’m more interested in cheesy internet-art movements from the last decade, like vaporwave.” Beck talks a lot about vaporwave, a faddish electronic-music microgenre that used slowed-down and screwed-up samples from muzak, smooth jazz, pop, and computer sounds. It was accompanied by a visual language that recycled defunct computer aesthetics, with Greco-Roman-statue and sunset memes thrown in. Vaporwave presents a view of the future from an earlier time, a future gone stale.

Beck can relate. “Vaporwave was made by internet nerds my age who grew up with dial-up internet and are nostalgic for that time.” He reads its retro­futurism through the work of a British philosopher, the late Mark Fisher. For Fisher, our current moment is haunted by promised futures from the past that never arrived, that were cancelled by postmodernity and neo­liberalism. But, in citing vaporwave aesthetics, is Beck challenging this malaise or embracing it self-consciously? Is he part of the solution or part of the problem?

Beck in his Wellington studio. 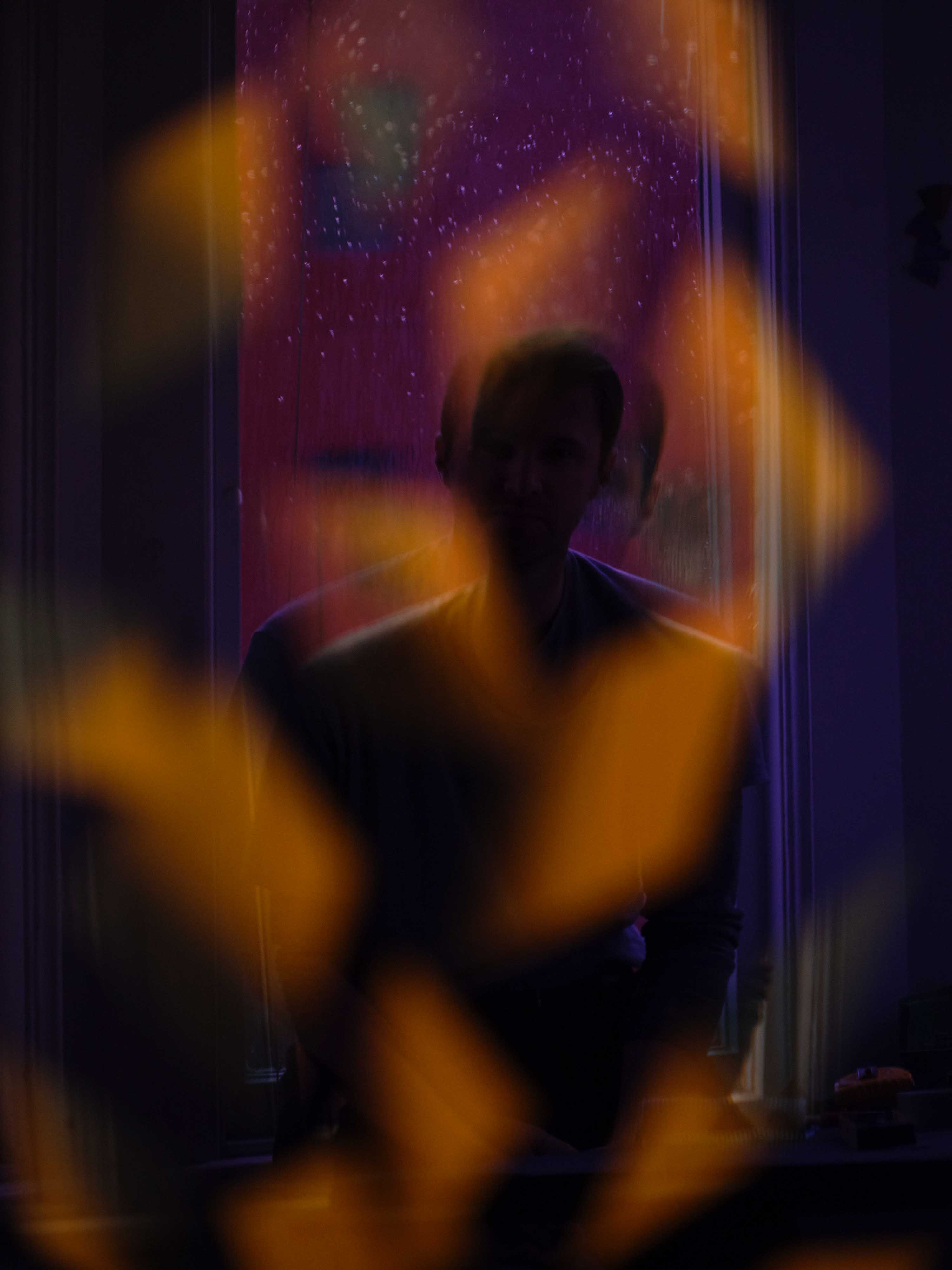 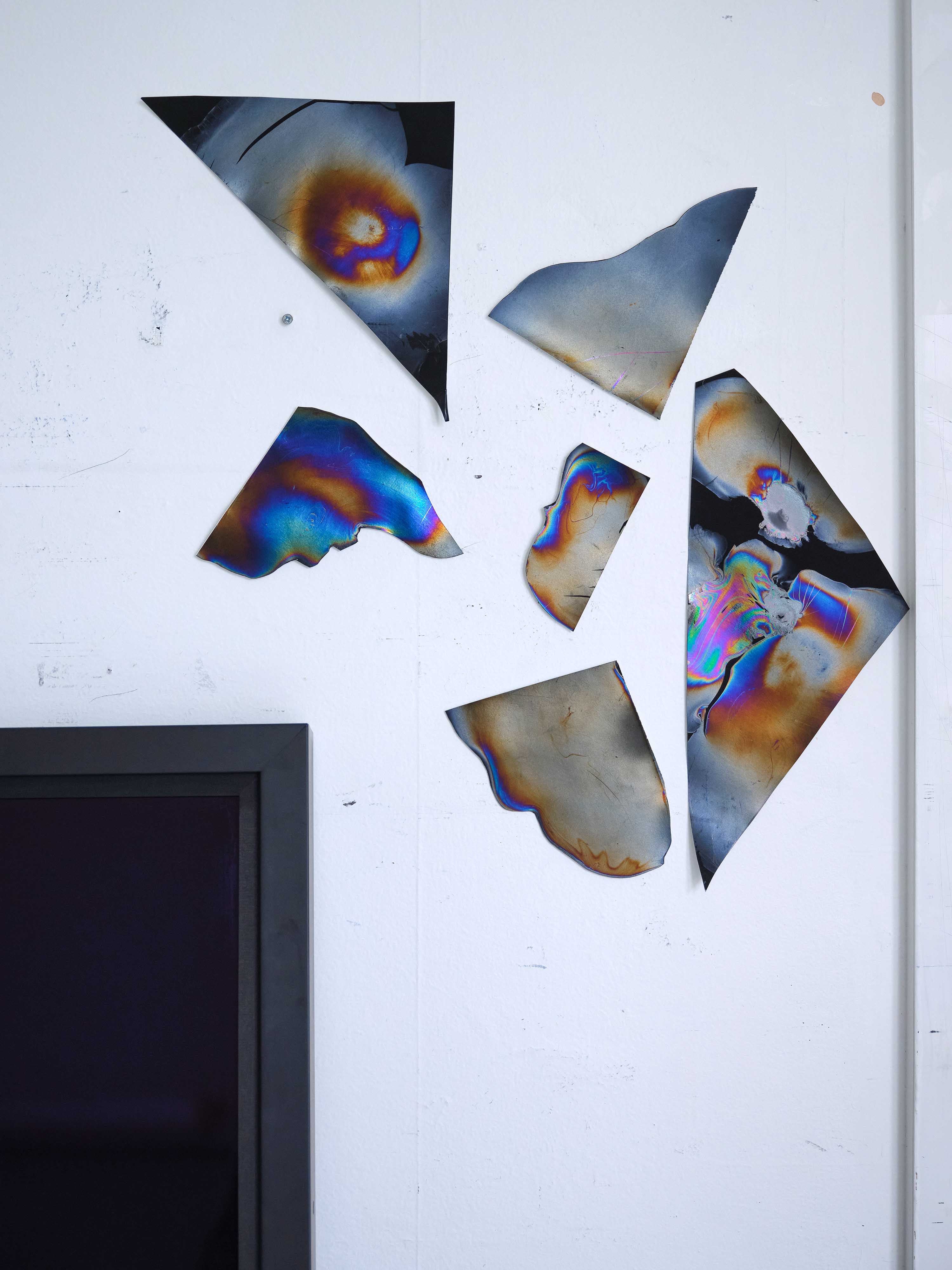 Fragments in the studio.

“In evoking a computer aesthetic via the darkroom, I’m labouring over an image that a computer can produce perfectly — easily,” he says. While his slick aesthetic appeals, it’s telling to visit the studio and confront the detritus of Beck’s low-tech analogue process. These days, digital photographers don’t get their hands wet, but Beck still does it the hard way. There are curled-up, fibre-based prints piled up everywhere, and he’s taken over the bathroom with his processing trays, with prints pinned up to drip dry.

Beck has also been making photograms by exposing photographic paper under water, so it registers the water’s ripples and eddies. He says: “I use a body of water as a lens. It’s like lying on the bottom of a pool and looking upwards to the water’s surface.” The water photograms allowed Beck to break out of his comfort zone. He says, “With my constructed photograms, I know what I’m doing. I introduced the water because it’s chaotic, something I can’t control. “

The water photograms featured in Beck’s first Auckland solo show, at Bowerbank Ninow in 2018. Its centrepiece — Open Surface (Holon) — consisted of 16 of them. Each was dominated by a horizontal line left by the edge of the glass sheet he used to hold down the paper as it was exposed, dividing the swirling waters. The photograms were abutted and aligned to create a common horizon, suggesting both a continuous beachscape and discretely framed meteorological moments.

In 2019, while on a Rauschenberg Foundation residency in Captiva, Florida, Beck turned a corner with his water photograms. Another resident, Puerto Rican performance artist Nibia Pastrana Santiago, prompted him to use his body in these works. “I’d never thought to do this,” he says. “But when I started waving my arms and legs through the water, when I put my body into the image, new references came into play.” Beck’s resulting works have an eerie, blurry, haunted quality, recalling X-rays and spirit photography — the artist as ghost.

What’s next? Beck’s making a sculpture out of car windscreens — those curved pieces of glass that operate both as lens and screen. There’s a story: “I grew up sweeping the floor of my parents’ windscreen-repair shop, with heaps of broken glass everywhere,” he says. Sculpture makes sense. “A lot of my installations are already sculptural, playing two-dimensional photographic representation back into the three-dimensional real world,” he says. “It’s photography, but backwards.”