When McCaHon met Dibble and Hackshaw 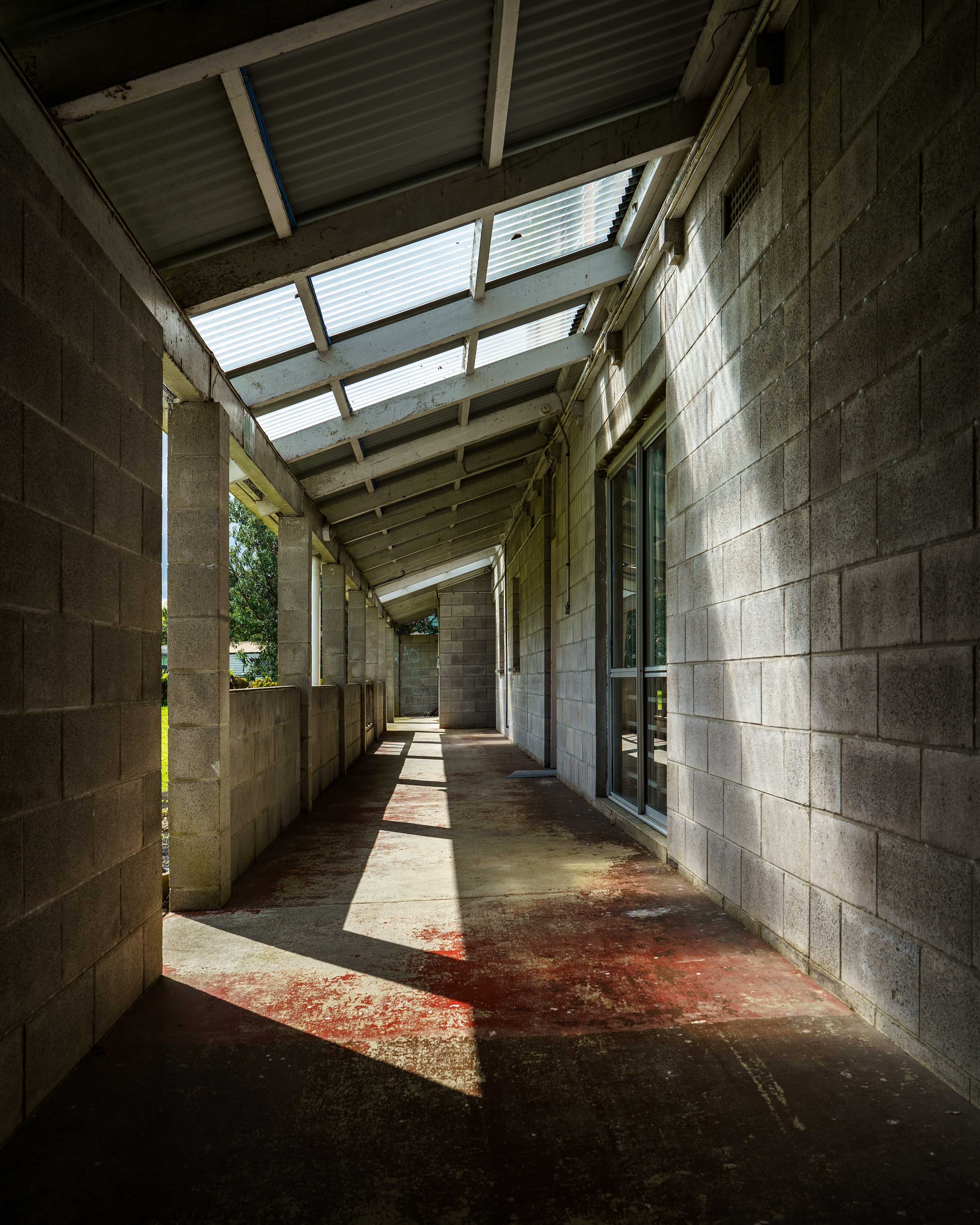 The cloister at the Ōtara Convent just before it wad demolished.

When McCaHon met Dibble and Hackshaw

The cloister at the Ōtara Convent just before it wad demolished. 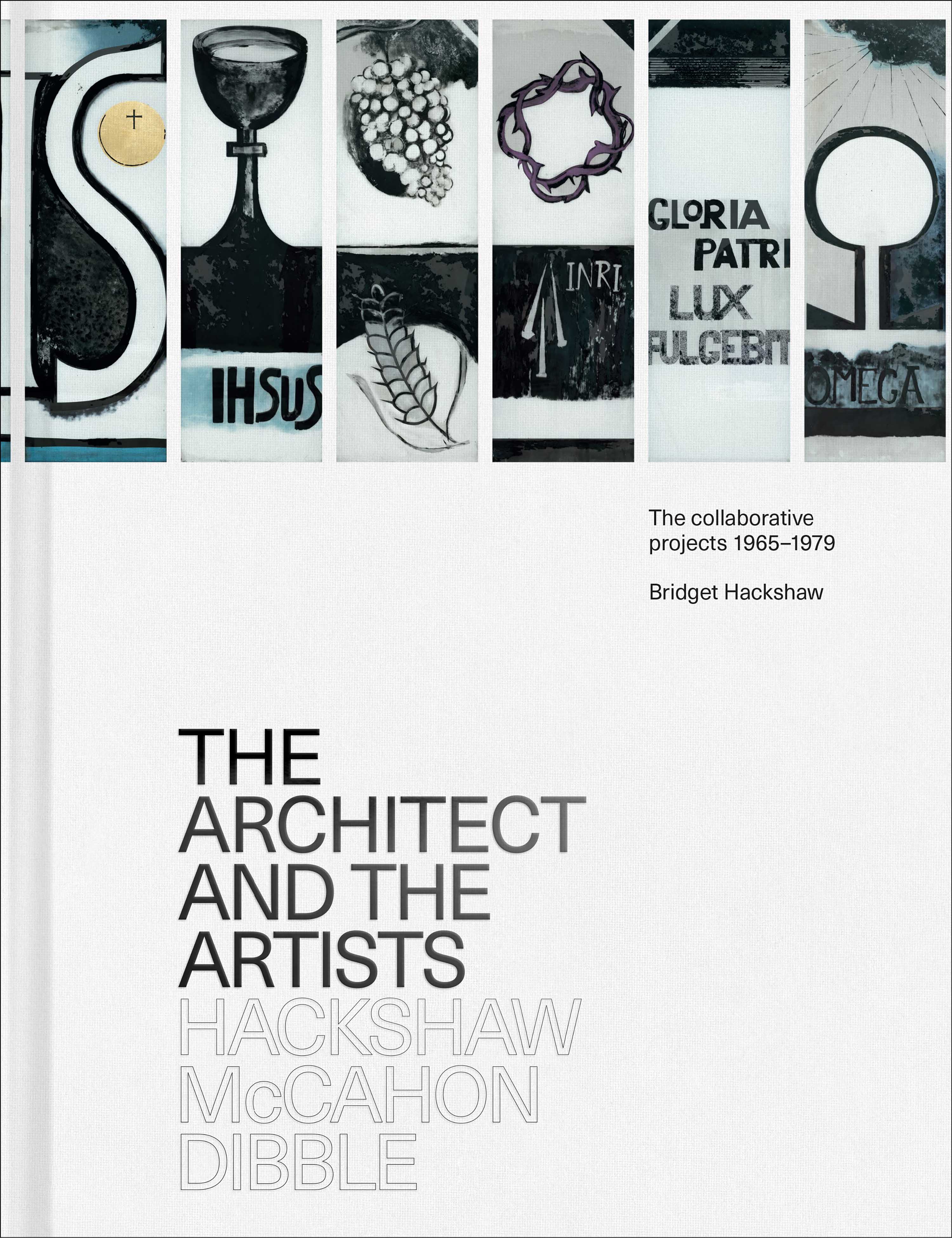 How much were you aware of this work as a child?

I knew that this collaborative work with Colin McCahon and Paul Dibble was interesting and fun for my father, but I didn’t really know what it involved in any detail. I went on site visits and to a few openings with my father, but my only vivid memories of the work are of the Upland Road convent, the Colin McCahon window in our house at Brilliant Street and St Ignatius Church at St Heliers. It was at Upland Road in 1966 that I met McCahon for the first time, when his windows were being installed. I saw Paul Dibble regularly through my childhood and my parents had a crucifix and candlesticks made by him (similar to those at Upland Road), so I was living with work that emerged from the church work.

What did this work mean to your father?

Painting, sculpture and music really excited my father and I think he was inspired and grateful to have this opportunity to integrate local and relevant art into his work. He said that architecture provides the space for the arts to evolve and exist. He thought it was marvelous that he, McCahon and Dibble had been able to reflect the local Te Puke landscape in the design, materials and artwork at St Patrick’s Church.

My father built a lot of refectory-style tables for family and friends but I was surprised to see furniture he had designed in all of the churches and did not expect to find so many meticulous drawings in the archives for altars, pews, shelving and seats. After Colin ceased working, Dad designed the stained windows for several houses he designed.

How did you became interested in this body of work?

It wasn’t until 20 years after Dad and I had had conversations about it that I thought about it again. By 2018 McCahon and Dibble were household names but these works were still largely invisible. I wasn’t aware of any other collaboration between an architect and such acclaimed artists that involved so many buildings. Dad’s reputation was based mainly on his domestic architecture emerging from his work in Group Architects. I was also conscious that the spaces, materials, art and symbols in public buildings have an influence on those around them. I was developing a strong interest in photography and was curious to discover and document the works. Andrew Barrie’s leaflet entitled ‘James Hackshaw’s Public Buildings’ provided a good place to start.

Tell us about tracking down the work.

It involved combing through drawings and documents in the University of Auckland Architecture Archives, the Catholic Diocese of Auckland Archives, visiting schools, churches and houses and talking with a lot of people. Once I was sure which buildings included works by McCahon or Dibble, I searched through McCahon’s letters and drawings at the Hocken Collections, the Alexander Turnbull Library and letters in the O’Reilly family collection. McCahon wrote frequently and in vivid detail to his friends about the work.

There were numerous exciting discoveries. I was thrilled to find some illuminating correspondence between McCahon and church parishioners in the cupboard of a house in Papakura. It had been boxed away 43 years ago, and never looked at again. The house belonged to a member of the parish building committee and Dad had designed the house. After several hours of conversations, his wife quietly showed me an essay she had written on McCahon’s religious paintings that she submitted for her Master of Arts.

I had never heard of the Ōtara Convent and it held some surprises. When the Upland Road job was completed, McCahon lamented that his ‘working towards meaning’ had come to an end. However, work began immediately in Ōtara. I found the building down a driveway on Ōtara Road, behind St John the Evangelist Church and adjacent to a marae and a primary school. It had housed 15 nuns, and by 2020, could easily have been mistaken for a stable, being a simple lean-to shape built with unpainted concrete blocks. The building had been unoccupied for years and contained scant evidence that the main room had once been a very sweet chapel.

Grass was creeping through gaps in what we later discerned to be McCahon windows in the corners of what had been the chapel. The room was cluttered with boxes and old furniture. We were stunned to see a small, striking McCahon window featuring large copper nails to form the Christogram IHS and a crown of thorns, with a ruby-red glass orb set high into the westerly wall. McCahon’s letters and drawings were a treasure trove, revealing and authenticating what McCahon had designed and made for this chapel. He had designed 12 windows, but only five remained. The Stations of the Cross had been individual panels and featured paint and numerals in burnished nails as well as Maltese crosses. McCahon had made a crucifix that Garth Tapper painted. The Catholic Diocesan Archive staff had a bronze tabernacle retrieved from the garage at a school and that Paul Dibble was able to identify as the one he had made for the Ōtara convent. As with the artwork, we have no idea of the whereabouts of the bespoke native timber furniture. At the end of 2020, we were able to have the remaining McCahon windows rescued just in time to prevent them from being destroyed by bulldozers to create a carpark.

A film directed by Christopher Dudman about this body of work will be released in 2022.

The Architect and the Artists
Massey University Press, $65 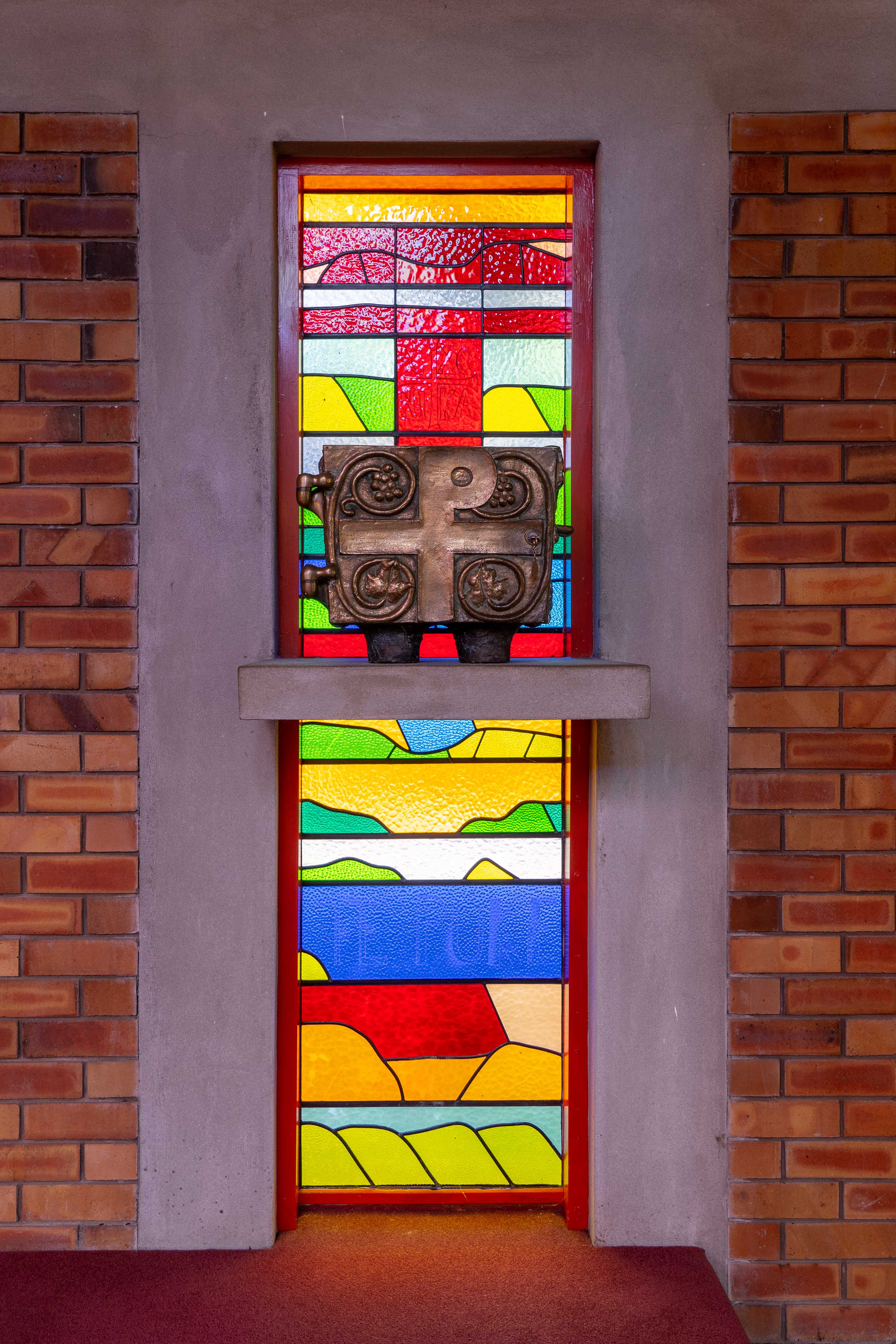 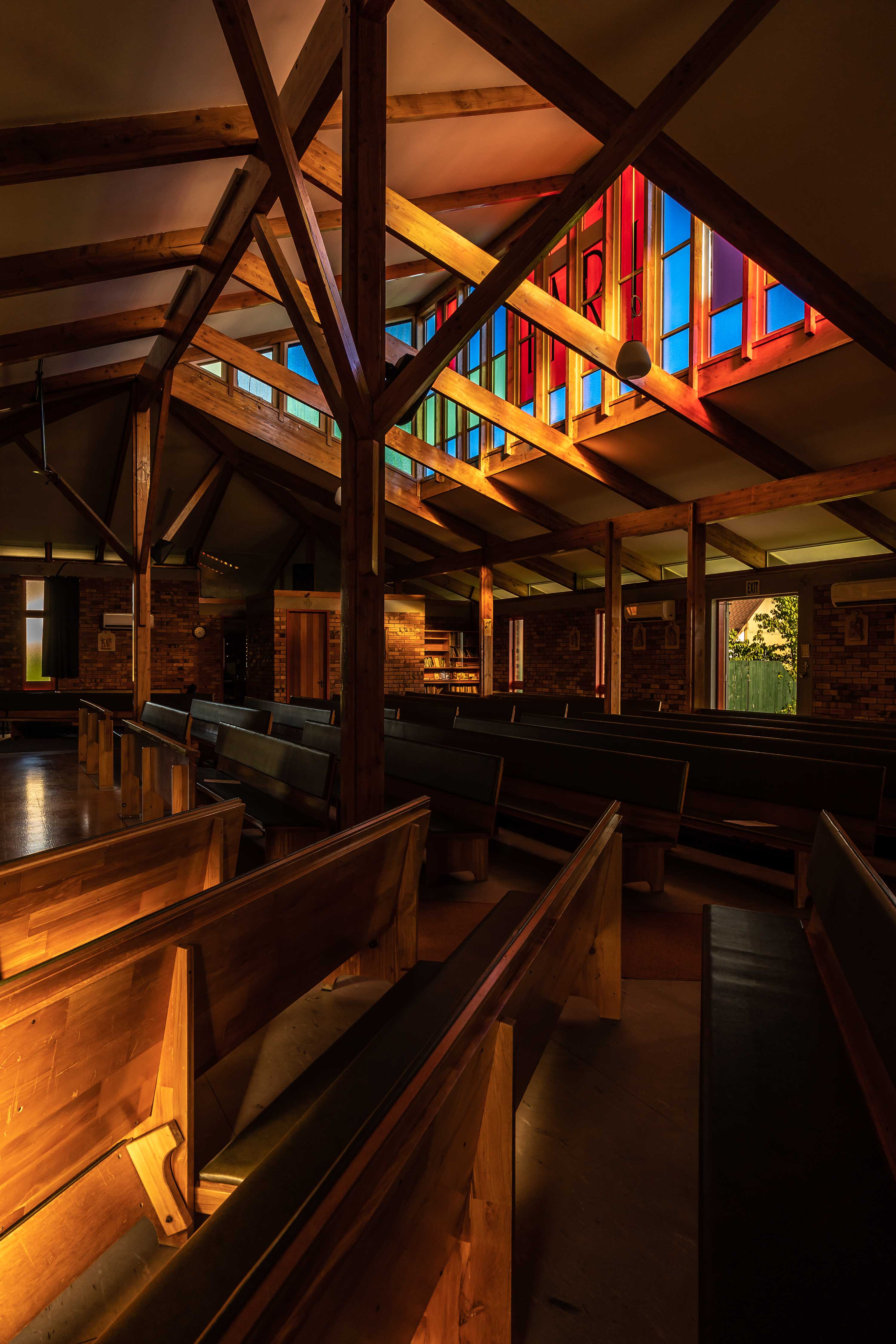 Warm light spills through the McCahon window at St Patrick's. 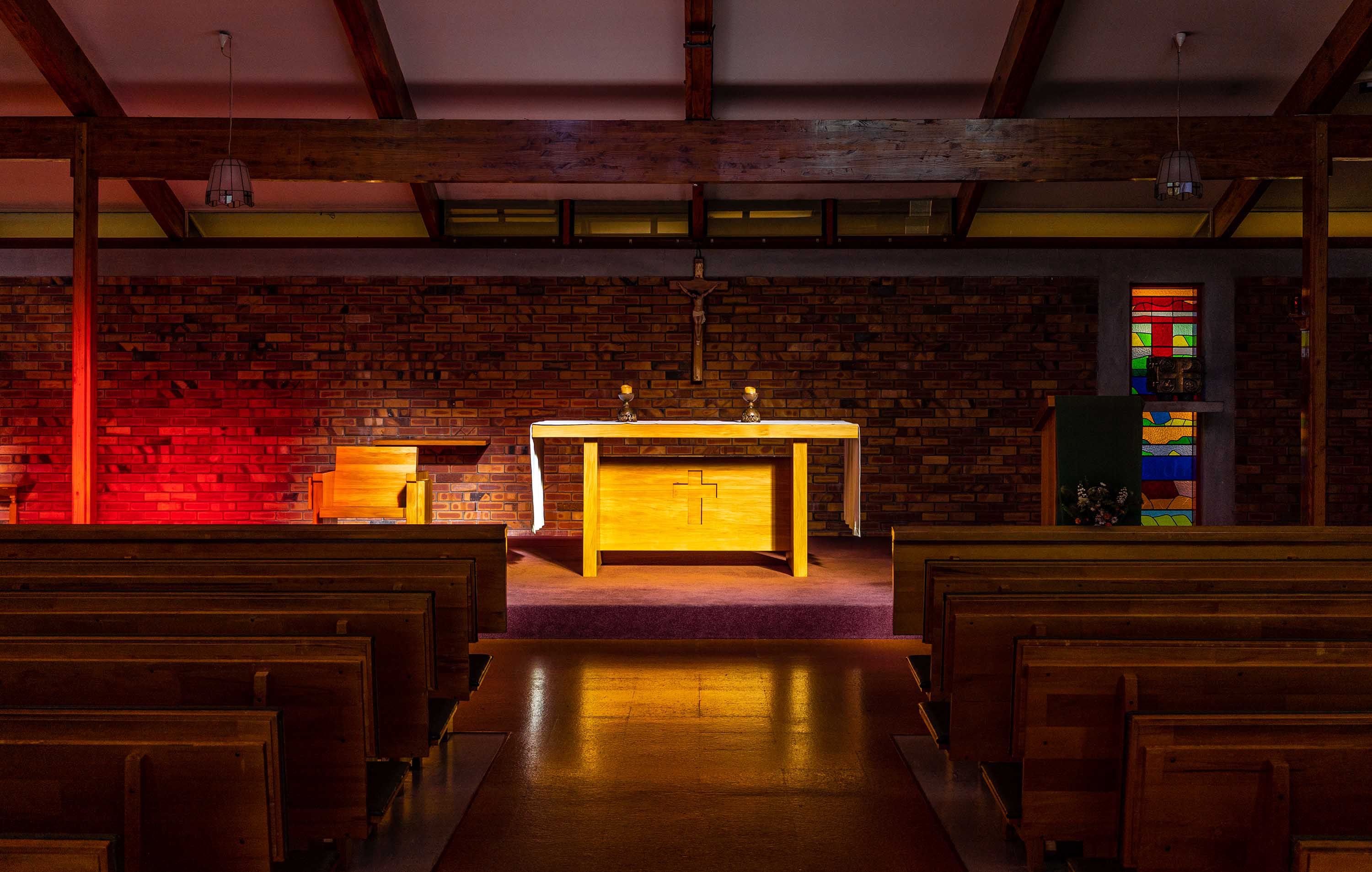