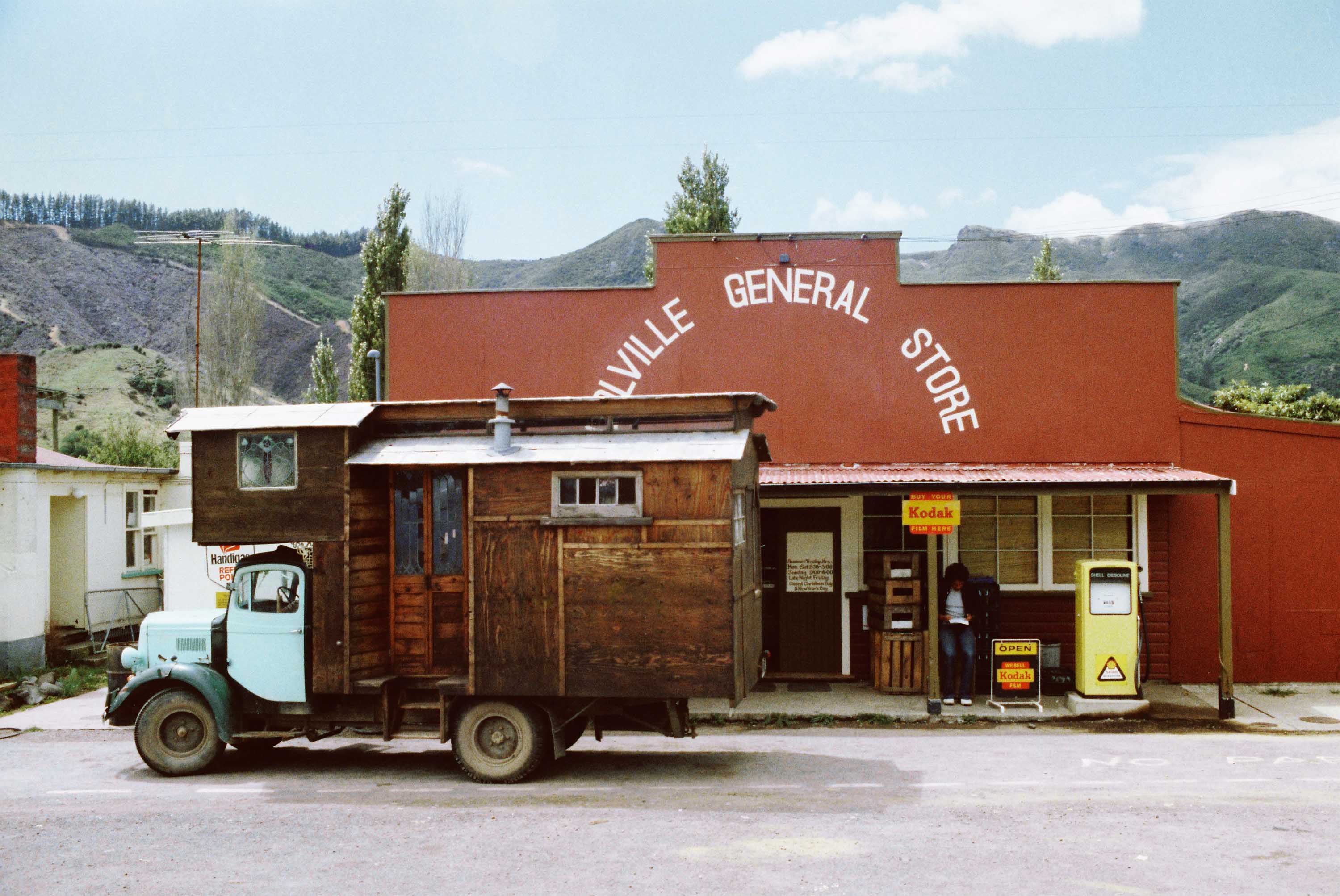 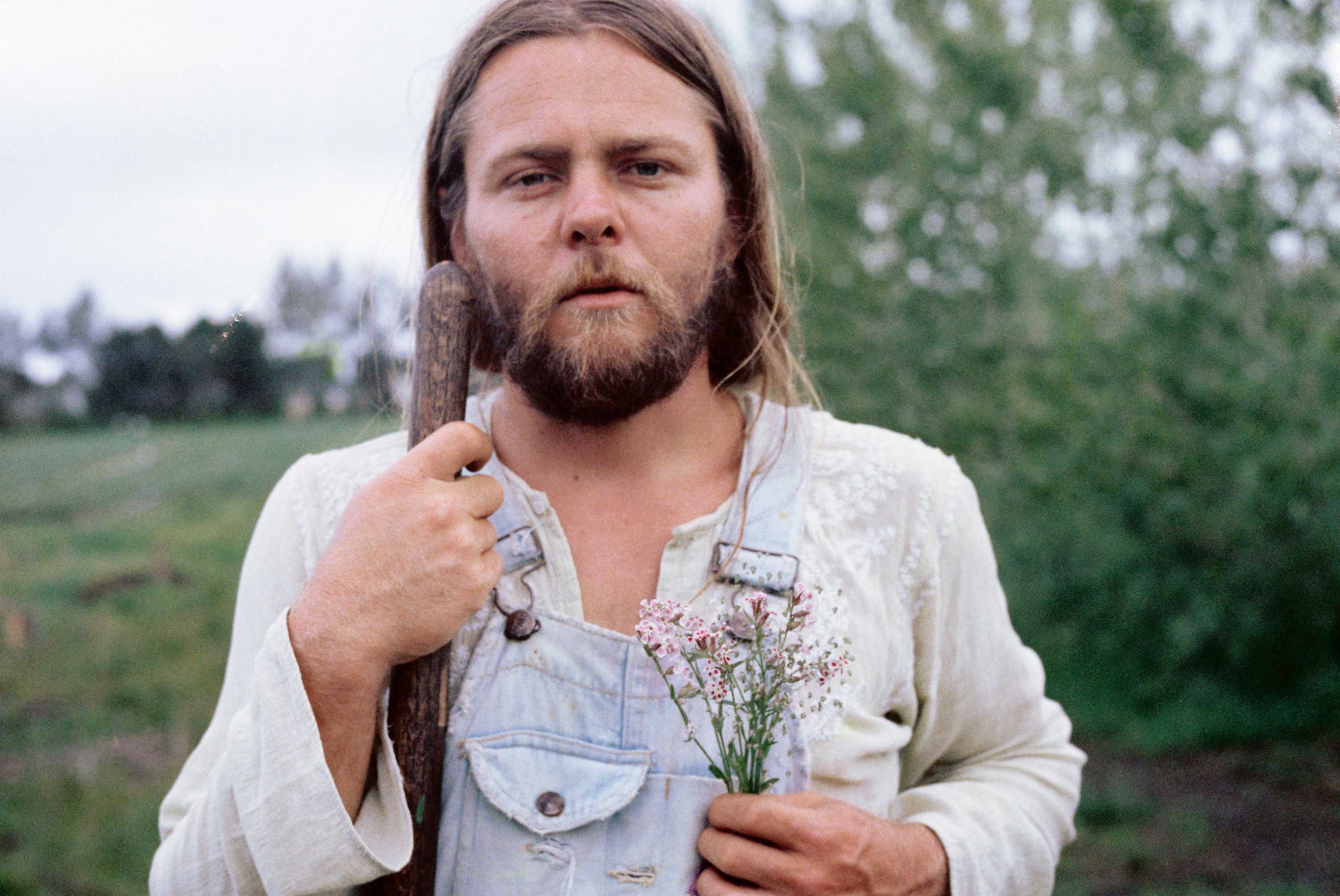 Paul Gilbert at Taupaki orchard, circa 1983.

The late Paul Gilbert was a photographer based in Tāmaki Makaurau Auckland. Between 1978 and 1984 he lived in a house bus, travelling with other house truckers, documenting their lives and journeys in an extraordinary collection of photographs, most of which were never published.

Gilbert was diagnosed with cancer in 2019 and not long before he died, he gave his 40-year-old archive to Haru Sameshima, fellow photographer and publisher at Rim Books. “I’d only seen a few faded colour prints,” says Sameshima, “but I knew he regarded this as one of his key accomplishments, so I said yes, let’s do it.” The resulting book is Road People, a fascinating insight into a movement which has all but disappeared from our roads, if not our memories.

Who was Paul Gilbert and how did he come to photograph house trucks?

I met Paul at Elam School of Fine Arts in the late 1990s, where he was teaching photography as a technical instructor. He was passionate about photography and ships – in particular, wooden sailing boats, so much so that he lived in one and commuted to the university from various mooring spots around the city.

Paul’s photography was an interesting mix of scientific precise recording of facts by cameras, and the tradition of “personal documentary” – the artist photographer documenting everyday life of family and friends, where a personal perspective is paramount.

Paul had struck up a friendship with John Tucker back in 1977. John was one of the first musicians/truckers of that era to build a house on a truck and choose a nomadic life on the road. This struck a chord with Paul, who saw the house trucks as the land version of his wooden boats.

Paul soon purchased and converted an old bus himself, and quit his day job as a photographer at the Auckland Art Gallery to pursue life as a freelancer to focus on the Road People photographs for the next seven years.

They seem to come from another age – what’s the appeal now?

The house-truck phenomenon emerged out of the alternative-life movement that arrived here in the 1960s. Unlike the earlier alternative-life seekers who strived for self-sufficiency on rural land, this younger generation sought a transient life on the road, using various music and lifestyle festivals such as Nambassa and Sweetwaters as the destination and source of income. The appeal was in the freewheeling life, untethered to land, mortgages and jobs for “the man”. Theirs was the last gasp of hippie idealism, before the greed and neoliberalism of the 1980s kicked in. This was also from another era, when Kiwis kept old vehicles on the road because of import restrictions, and vehicle certification was relatively laidback.

Paul Gilbert at Taupaki orchard, circa 1983. 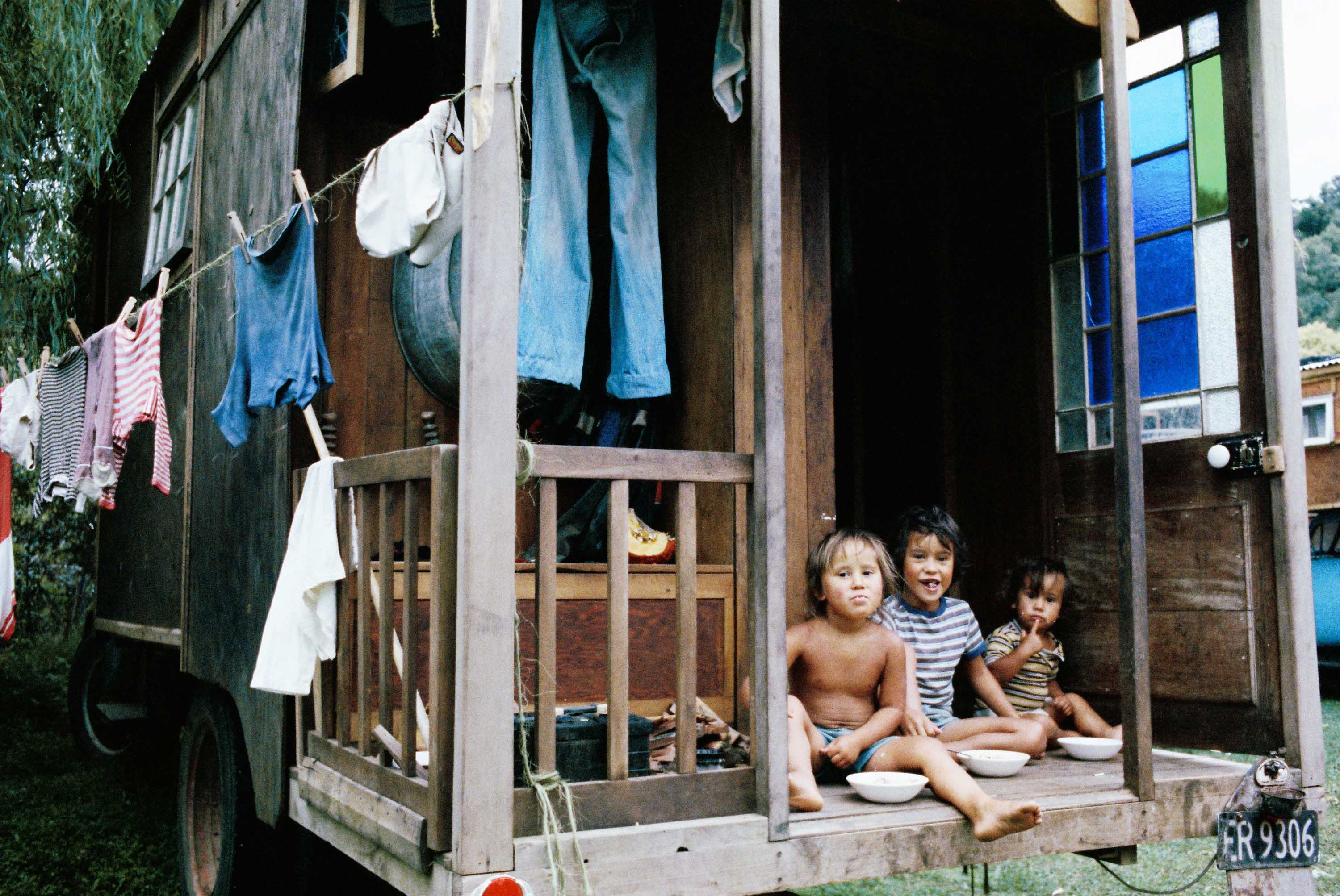 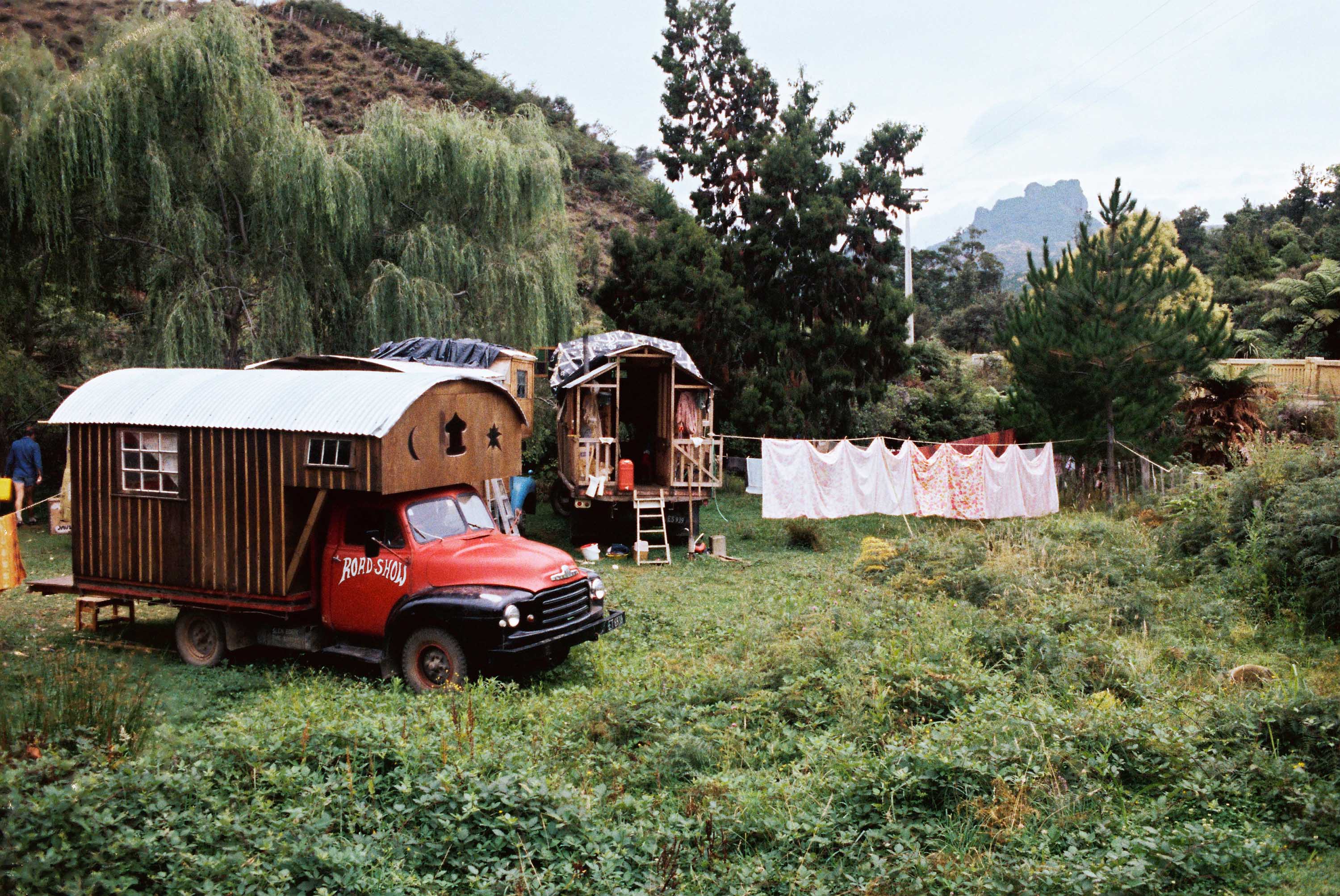 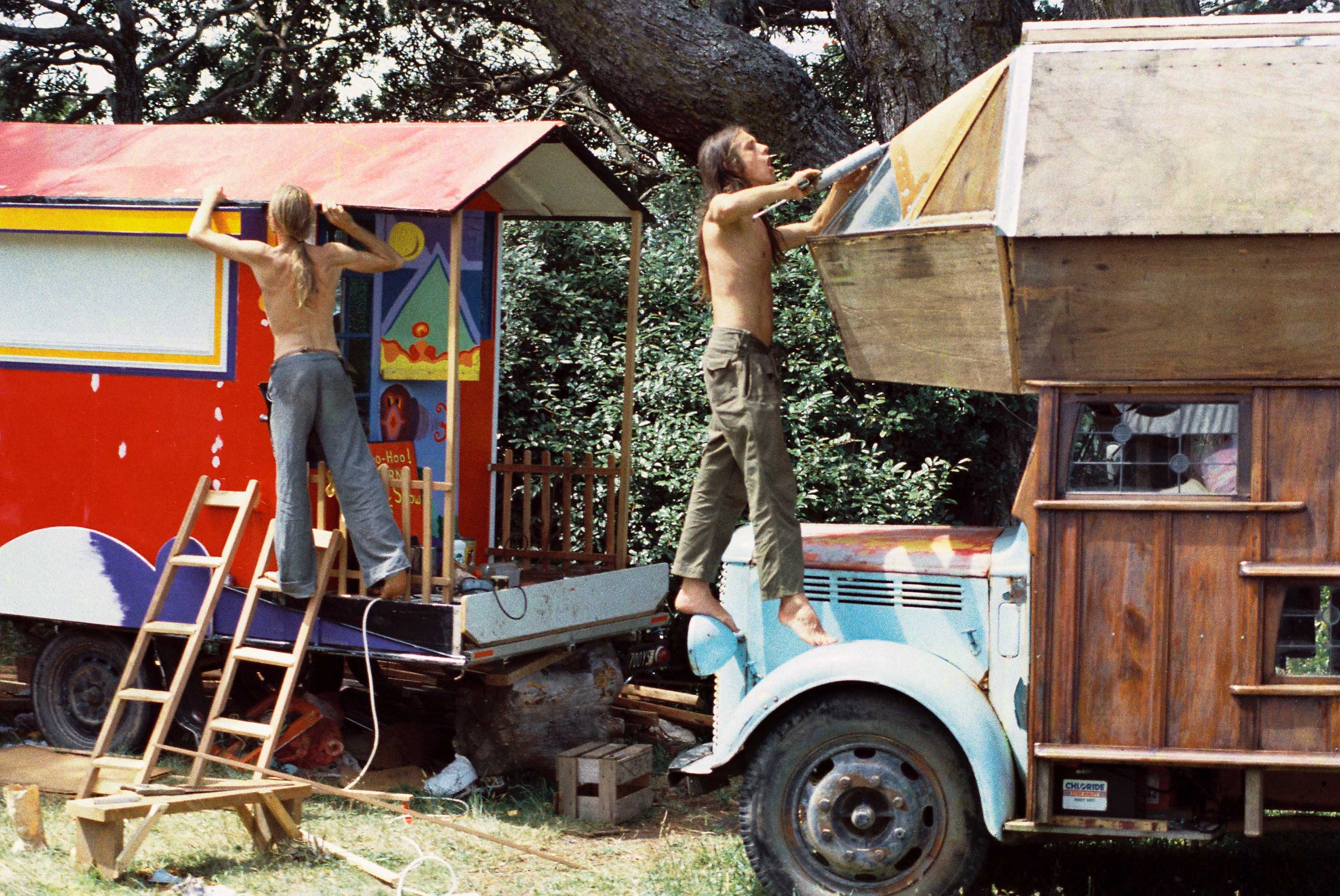 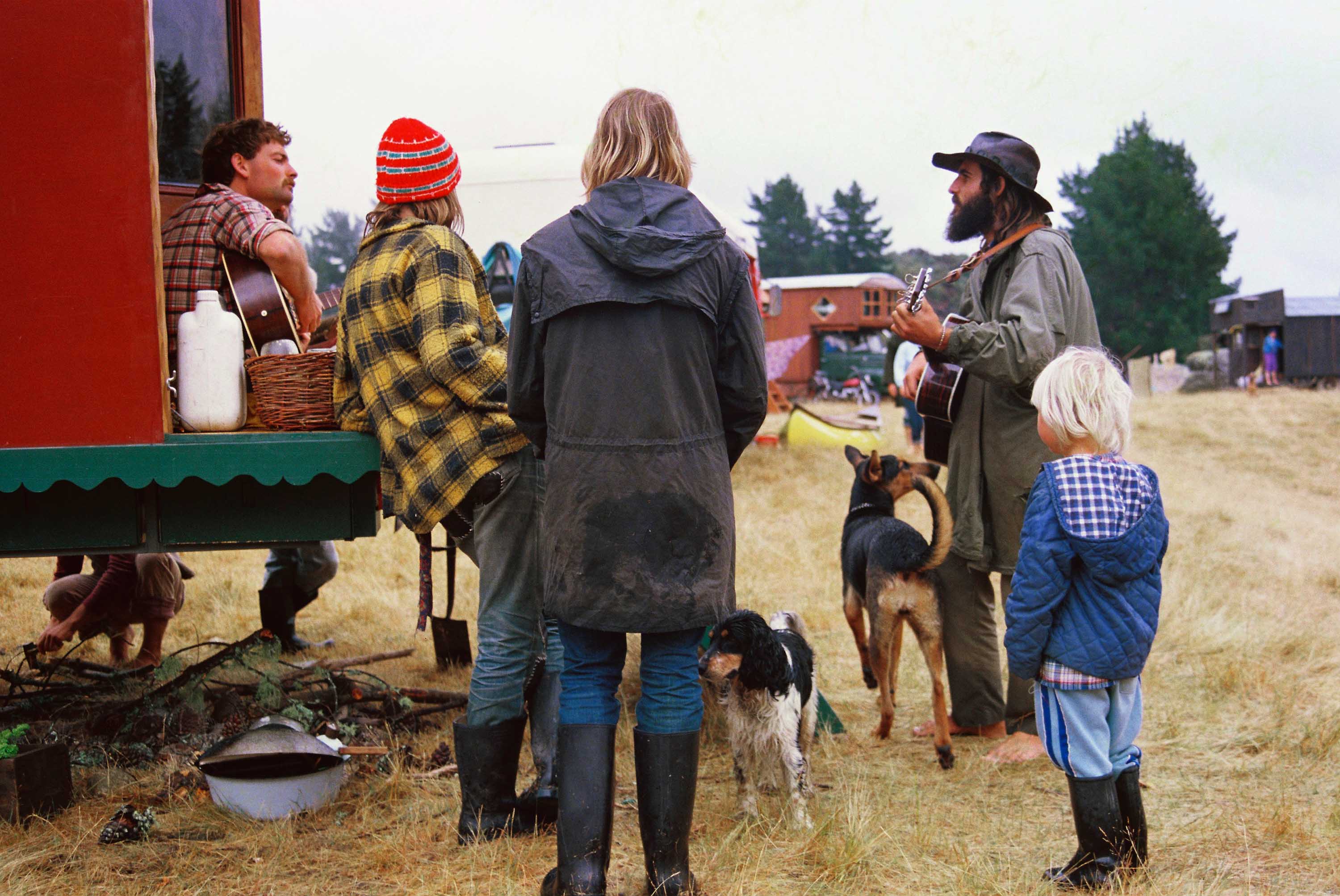 Tell us a bit about how the book came to be.

After we both left the art school in the 2000s to pursue our independent art careers, I saw Paul only occasionally. He was working on his maritime heritage documentary projects and running High Tide Gallery – showcasing young artists he had taught when at the art school.

When Paul was diagnosed with cancer, he approached me to publish the Road People project. He had arranged this archive to be machine scanned, which was going to take three weeks. Sadly, that proved too long and he passed away before he could see them come alive in their entirety.

The negatives were preserved neatly in folders but he didn’t write down any information about the places and people and events, and the sequence of the files was not chronological – so it took much dedicated detective work to sort them back into a timeline.

I asked John B Turner and Megan Jenkinson, who were colleagues of Paul at Elam, to help choose the initial selection of several hundred images in order to shape it towards a book. The pandemic year of 2020 with its lockdowns that kept us glued to our screens helped develop this project. I uploaded a selection of images to a private Flickr account and invited the Road People, as they became known, to view and identify each photograph. A chronology started to emerge as more contacts expanded through further introductions. We structured the book in subject groups, such as the making of trucks, road trips, family scenes and performances from various festivals across the seven years. This way, the ambience of the entire period is evoked from his portfolio. I hope he approves of what we have done!

There’s an incredible intimacy to the photographs, an ease – what created that?

Megan described Paul’s role as “an embedded witness… documenting from the ‘inside’ was crucial for the series’ development for it enabled him to record his subject’s day-to-day existence. The intimacy of these photographs is their strength.”

John B Turner elaborates this idea in his essay in the book, saying Paul’s photography “was personal in that it wasn’t made for a mass audience… but neither was it quite as personal as a family snapshot, to be shared with only an intimate circle and to record a family event. It was outward-facing… but driven from within. And if it depicted close friends or family it was in a way that was more universal than particular to those people.”

Paul himself acknowledges his subjects as his family: “The photographs are all taken with the acceptance of my documentation as a family member of this sub-tribe. As such, it is a mixture of objective and subjective viewpoints that would not have been possible without the trust and generosity of those featured. I am deeply indebted to all who shared the music, the food and the love along this journey.”

What I discovered while piecing together the contexts of the seven years is that Paul played an important role in the evolution of the house-truck culture himself. He was there when many house-truck babies were born and observed them grow up. His photographs are cherished by these now-adult children, with their own families. This book is dedicated to them. 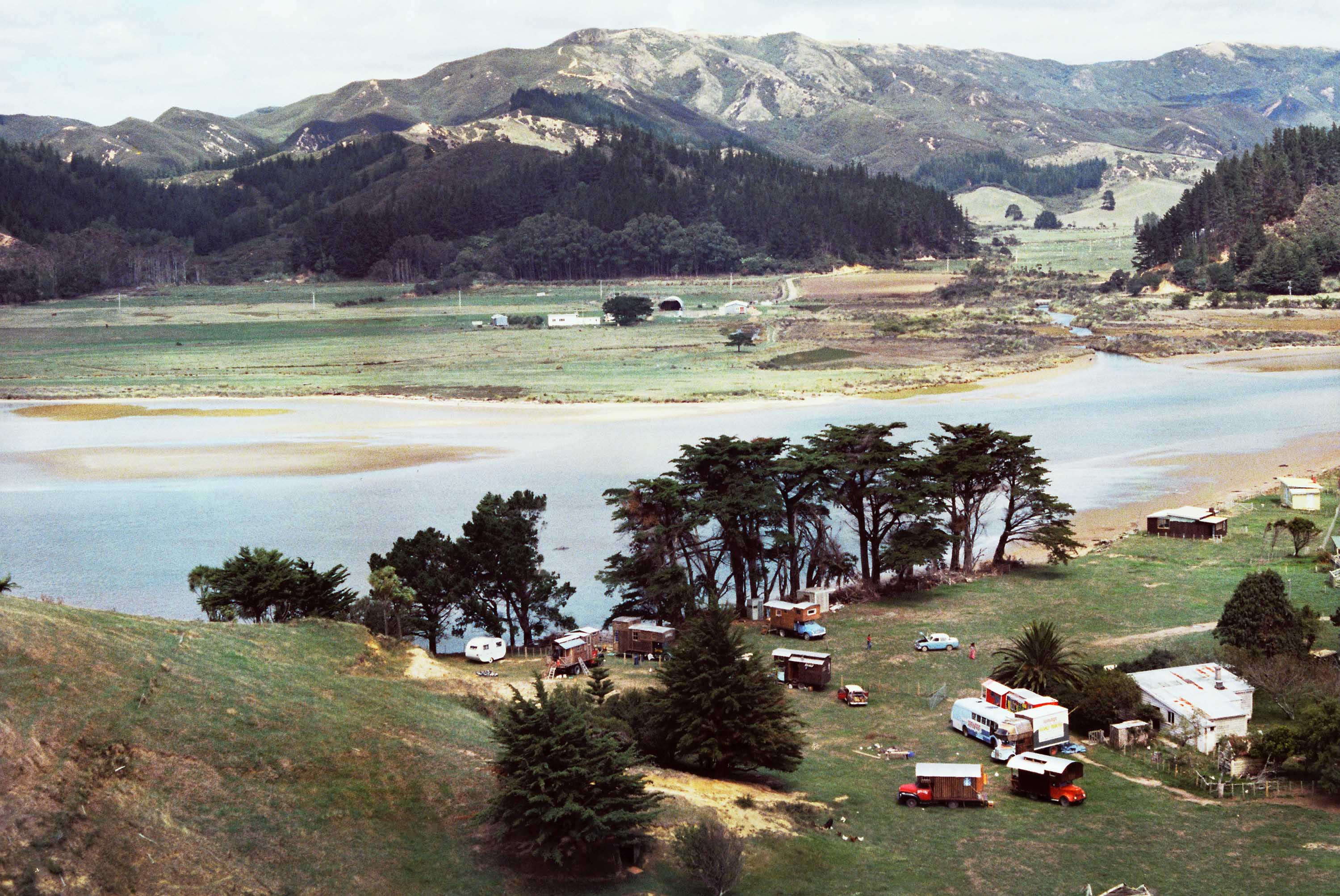 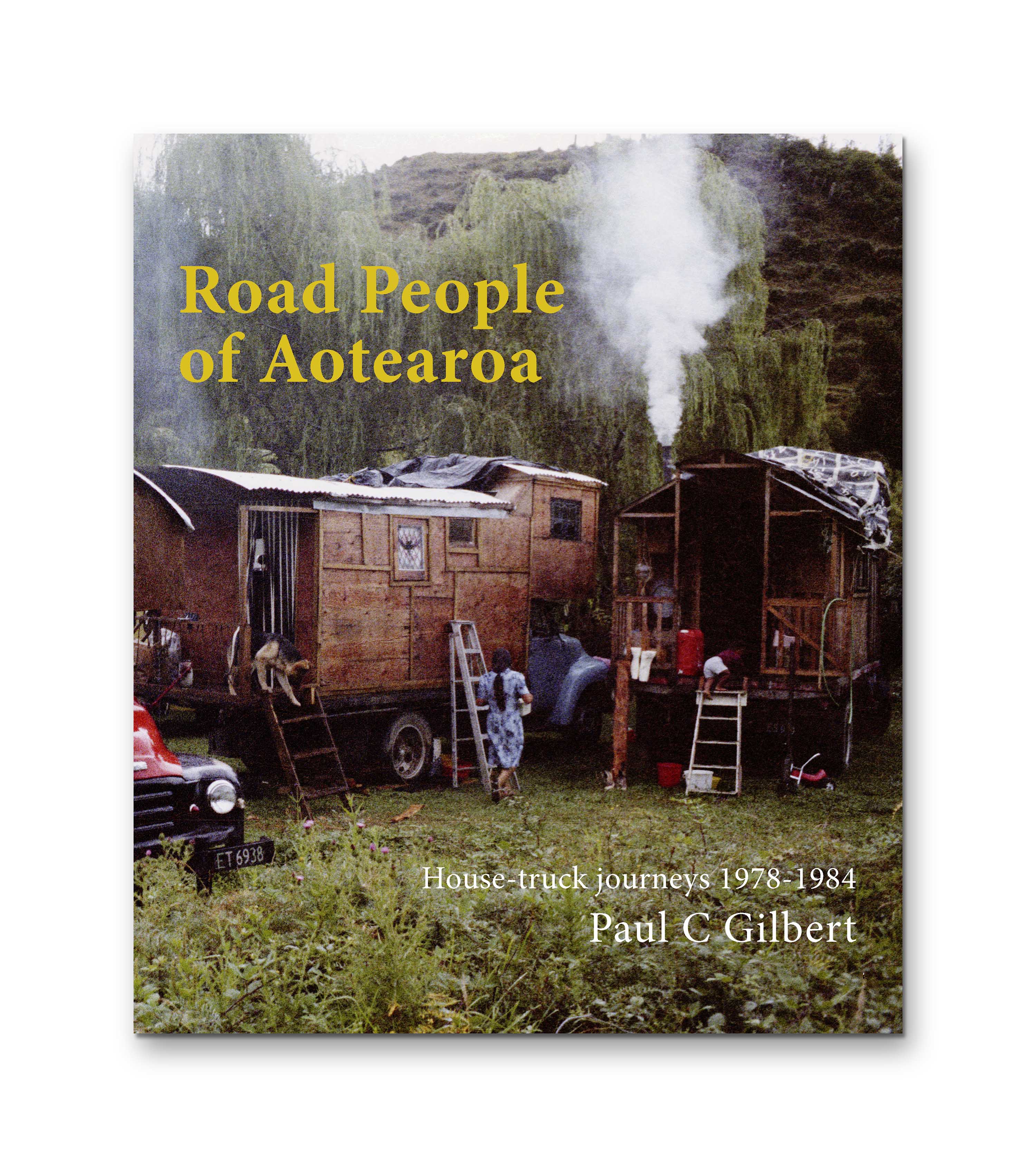