When Inhouse moved its design studio to a quiet pocket of bush in Birkenhead, Tāmaki Makaurau, a garden was top of mind. 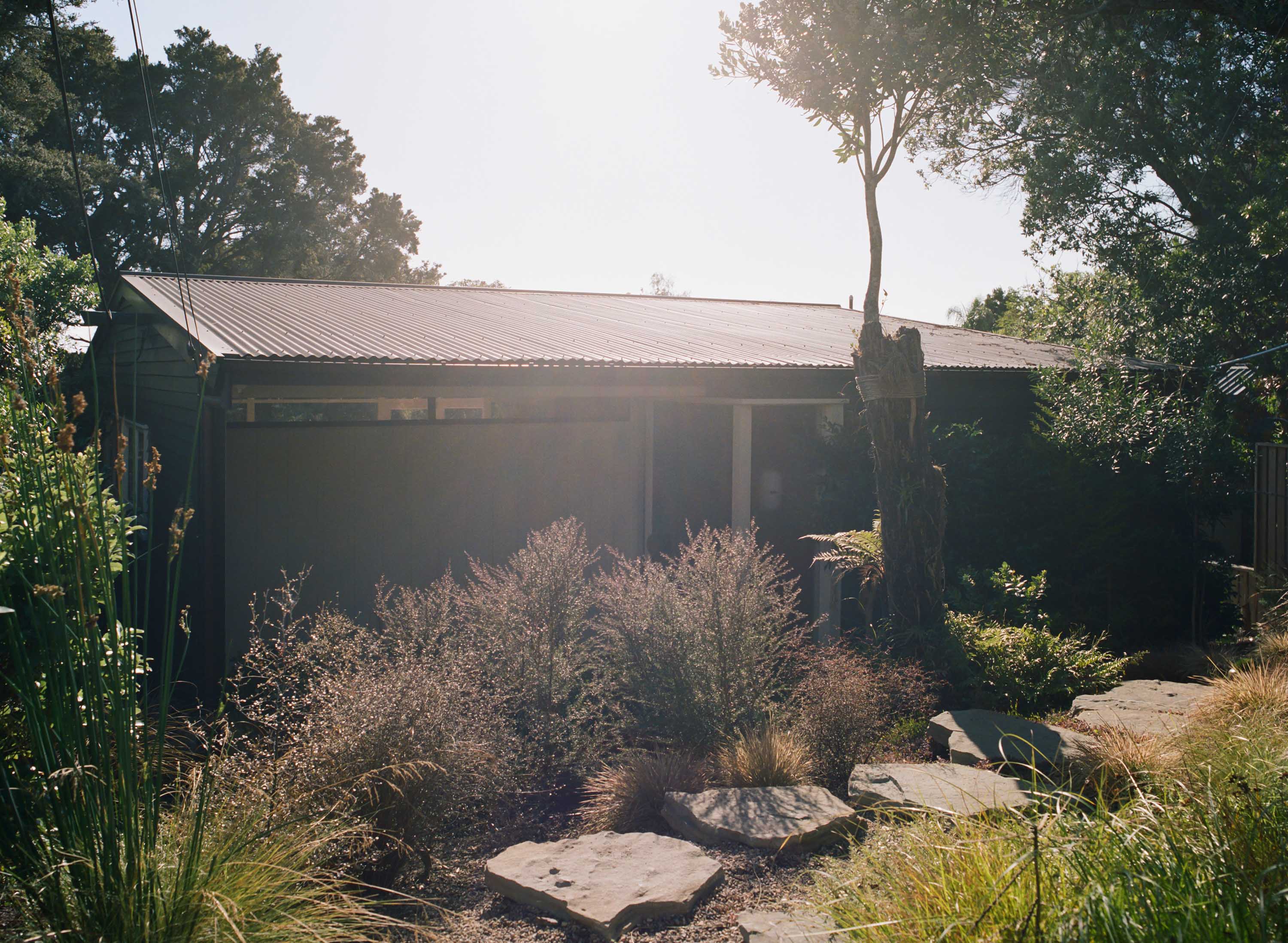 Sunrise over the studio.

When Inhouse moved its design studio to a quiet pocket of bush in Birkenhead, Tāmaki Makaurau, a garden was top of mind.

Sunrise over the studio. 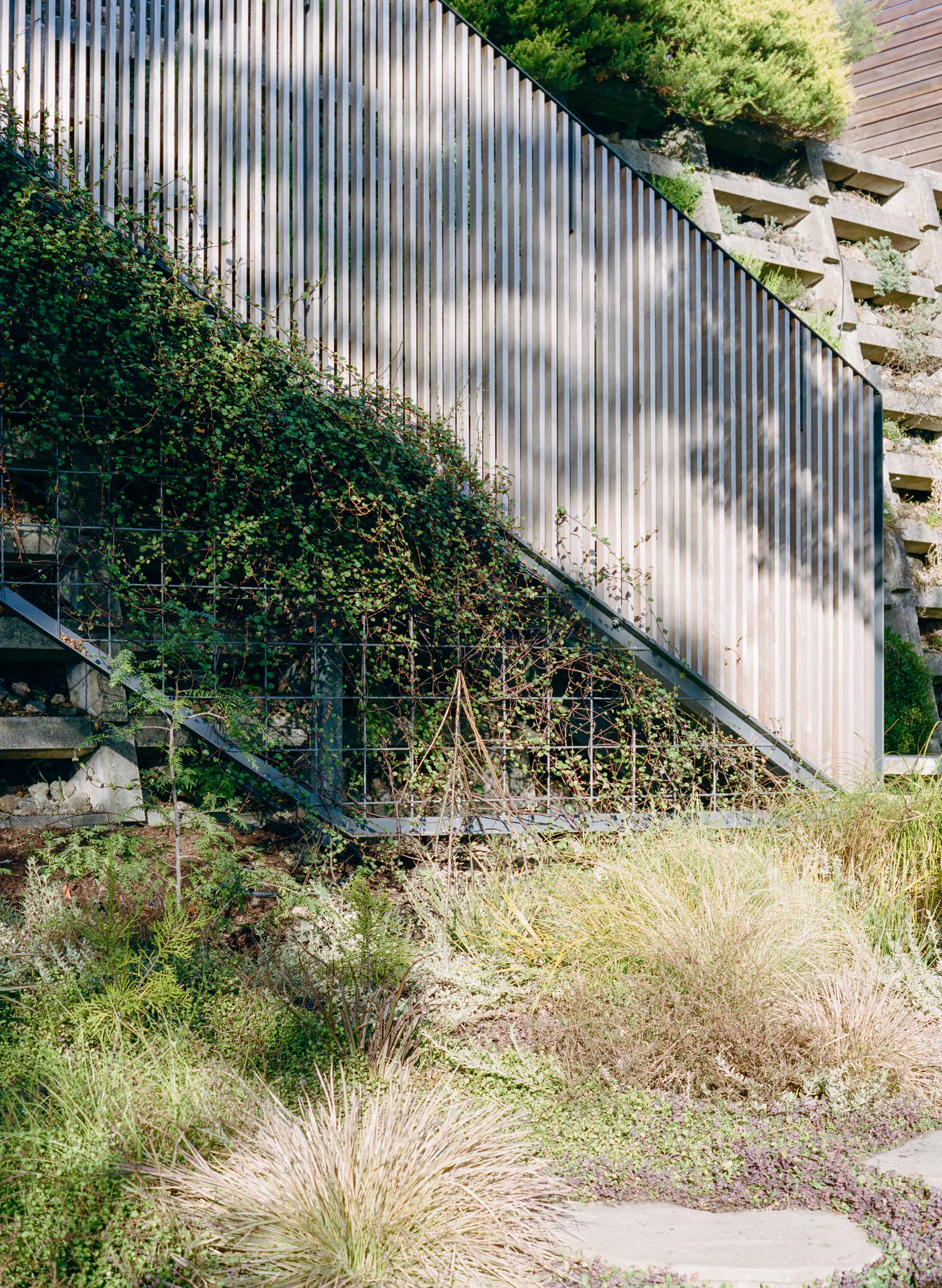 Cedar-clad stairway from the street.

We had been working in semi-industrial buildings for 20 years, all devoid of outdoor spaces. So, when we decided to relocate from our Britomart studio to the calm sanctuary of leafy Birkenhead Point, having outside areas and a garden to tend was hugely appealing. When we discovered a humble 60s two-storey structure nestled into the edge of Le Roys Bush, we saw the opportunity to combine our twin loves of design and the New Zealand landscape. Both the house and garden were in a sorry state, but both had the potential to be great.

The garden had three distinct zones: the rear garden, a steep slope leading into Le Roys bush dominated by an impressive tōtara, but surrounded by an equally impressive amount of noxious weeds from gargantuan wild ginger to the invasive tradescantia; the upper garden and entrance was flatter land and home to a mangey kikuyu lawn; the third garden space was a crib wall that the staircase from the street runs parallel to: a dry, rocky wasteland home to an array of pest species. We had a blank canvas in desperate need of some love.

When we moved in, in 2017, we were quickly adopted by the local community group, Beyond the Fence, spearheaded by the saintly Linda Tisch. They were instrumental in securing council funding to assist with weed eradication and supplying locally sourced plants from the Kaipatiki Project. The lower garden is primarily a re-wilding project – the land is too steep to use, so the plan is to regenerate it back to bush. Kahikatea, taraire, tanekaha, mānuka, ponga, and nikau palms take hold on the slope.

The plan for the upper entrance garden was to be a more manicured affair. We had recently returned from a trip to Tokyo and took inspiration from the gardens we visited there, particularly the Nezu Museum Gyōen and the impressive Odawara Art Foundation, a short bullet train ride from central Tokyo. We wanted to recreate our version, using New Zealand native flora. Creating a sense of arrival was always an ambition — a contemplative stroll from top gate to front door. You first engage with the crib wall at eye level, now filled with natives, including Muehlenbeckia axillaris, dripping blue Pimelea prostrata, and new favourite Peperomia blanda with tendril-like flowers that have an almost aquatic, coral-like quality.

At the bottom of the new stairway is a formal sculpture designed and built by friend Adam Ellis to house a northern rātā, which sends roots south and will eventually engulf the sculpture and create a free-standing tripod. From here, you tip-toe over set stones surrounded by native flora, all featuring miniature foliage reminiscent of a Japanese garden; the wildly divaricating Muehlenbeckia astonii, various coprosma, a black beech tree. The desired effect is that you’re in a state of calm by the time you are through the studio door.

Cedar-clad stairway from the street. 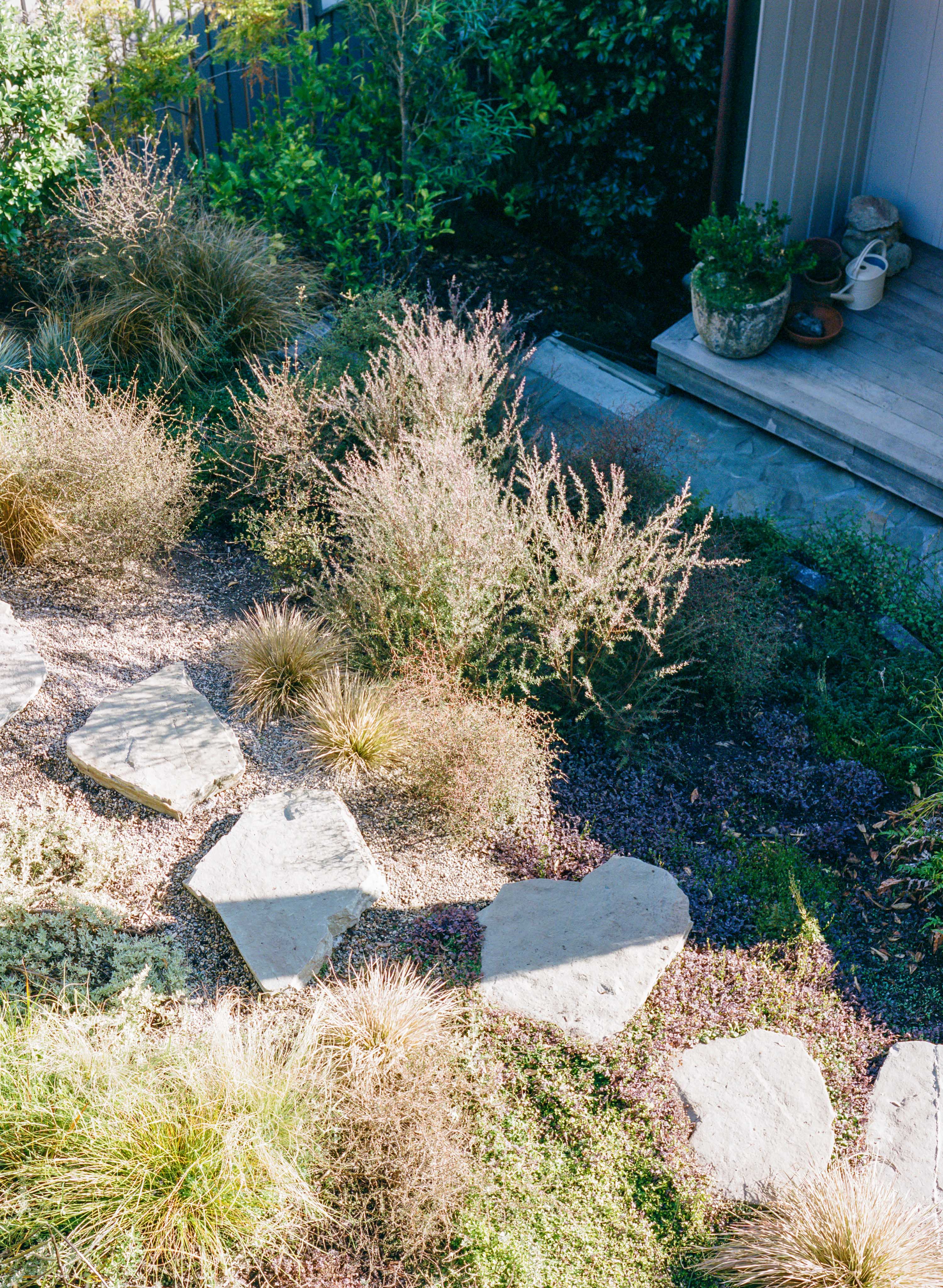 The stepping stone pathway through an array of native groundcovers. 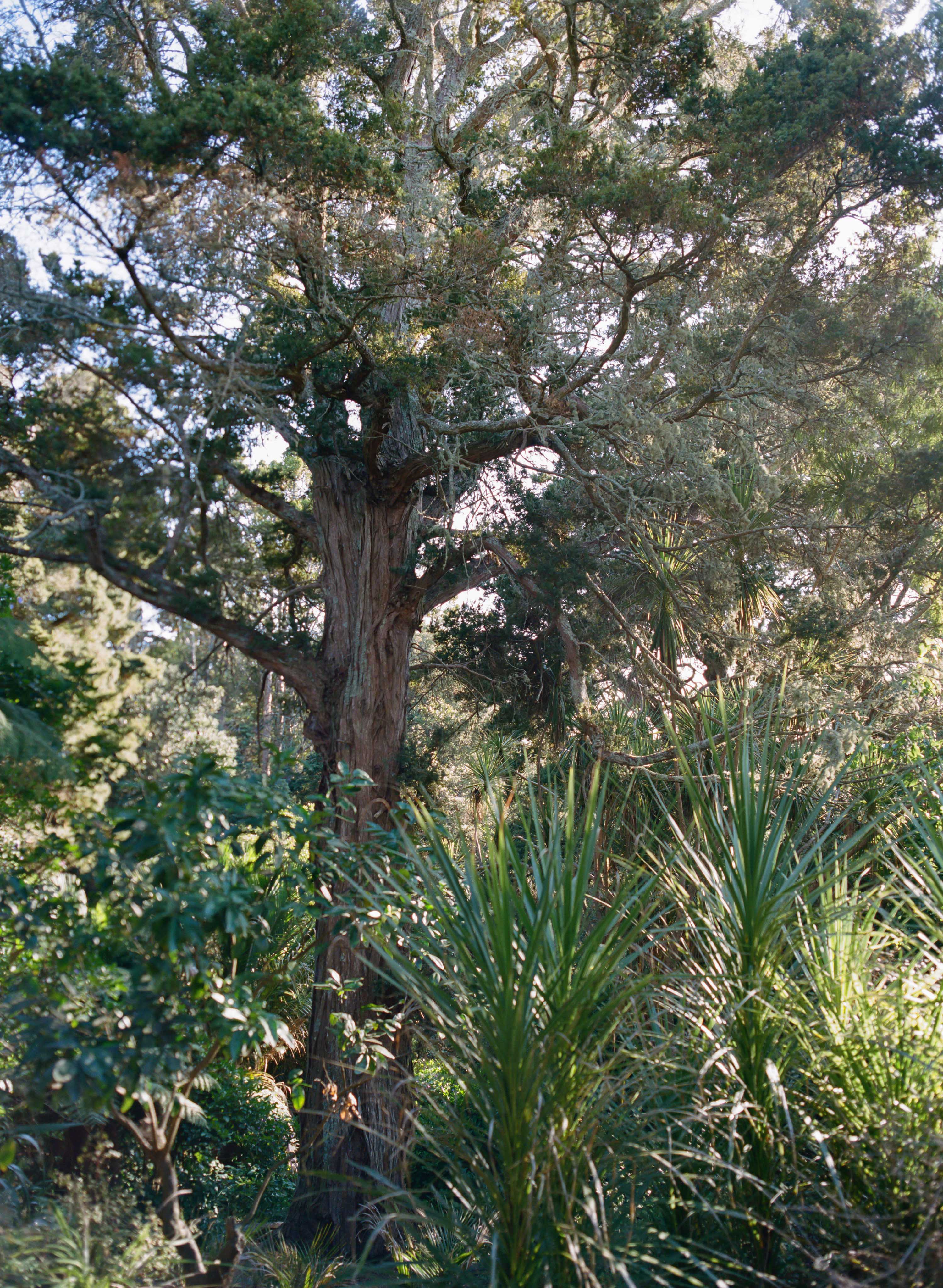 The mighty tōtara that dominates the back garden. 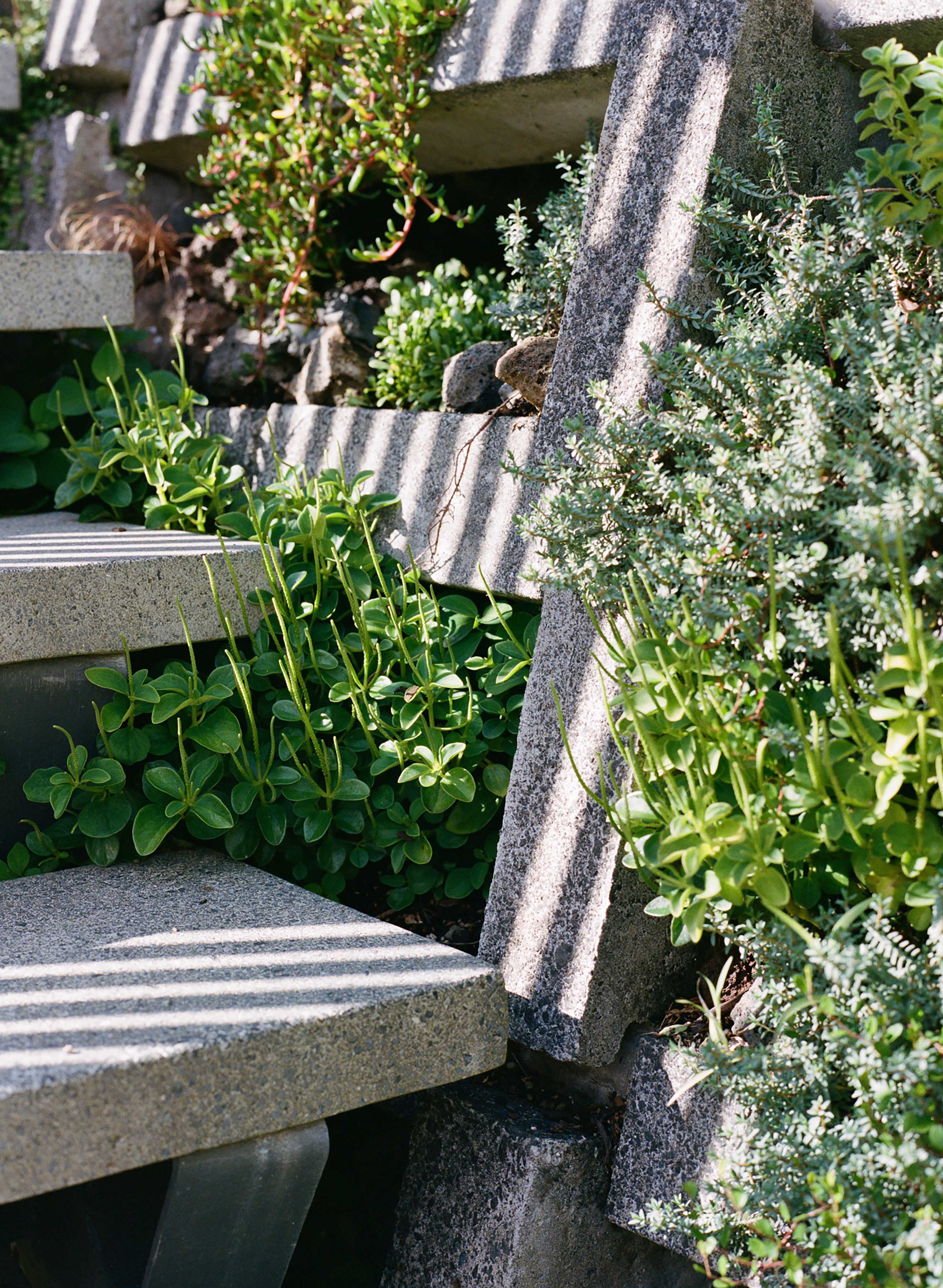 The retaining wall at the entrance from the street. 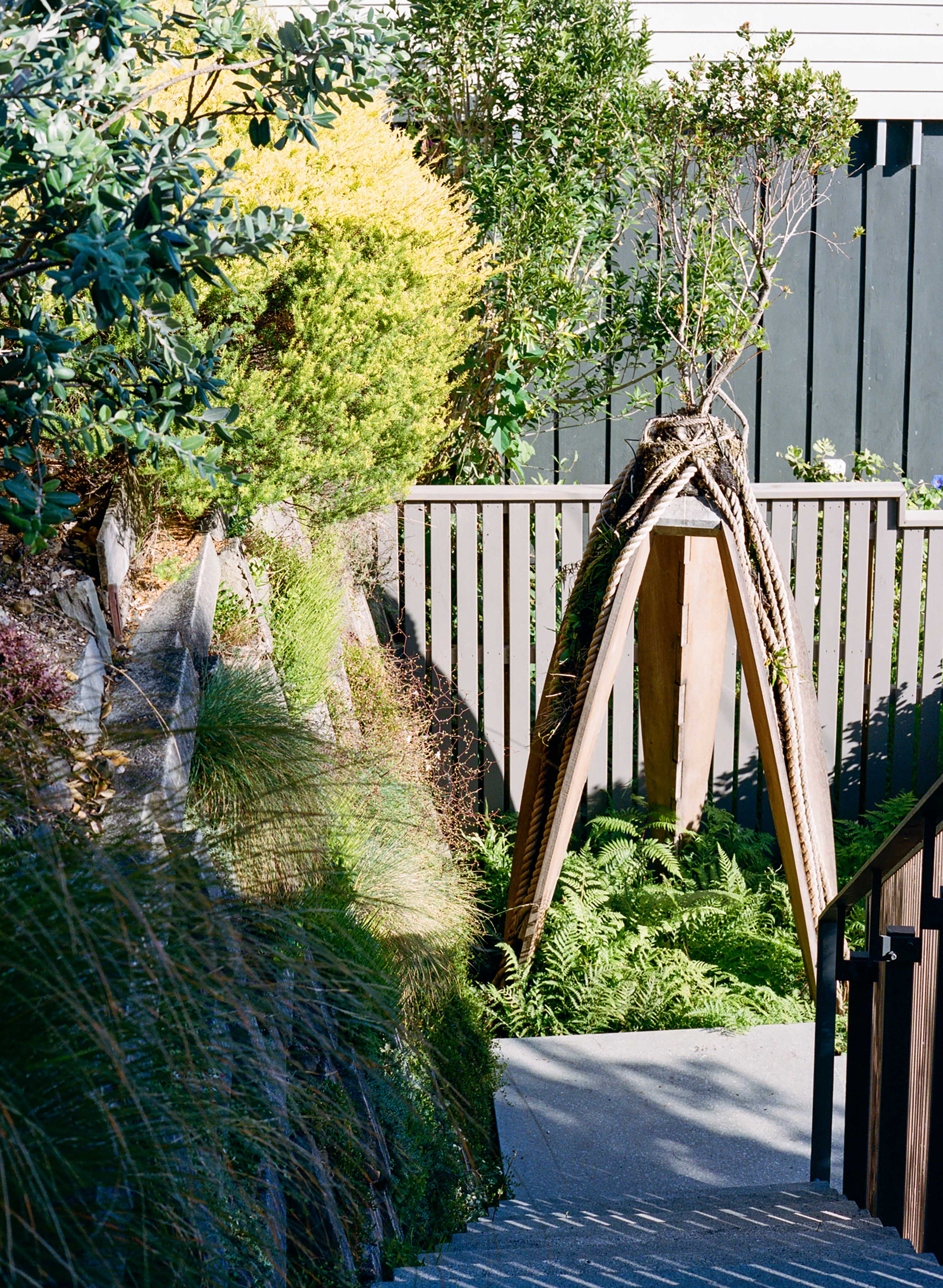