Down on the shore

A new boutique hotel in Ōtepoti Dunedin celebrates a much older history. 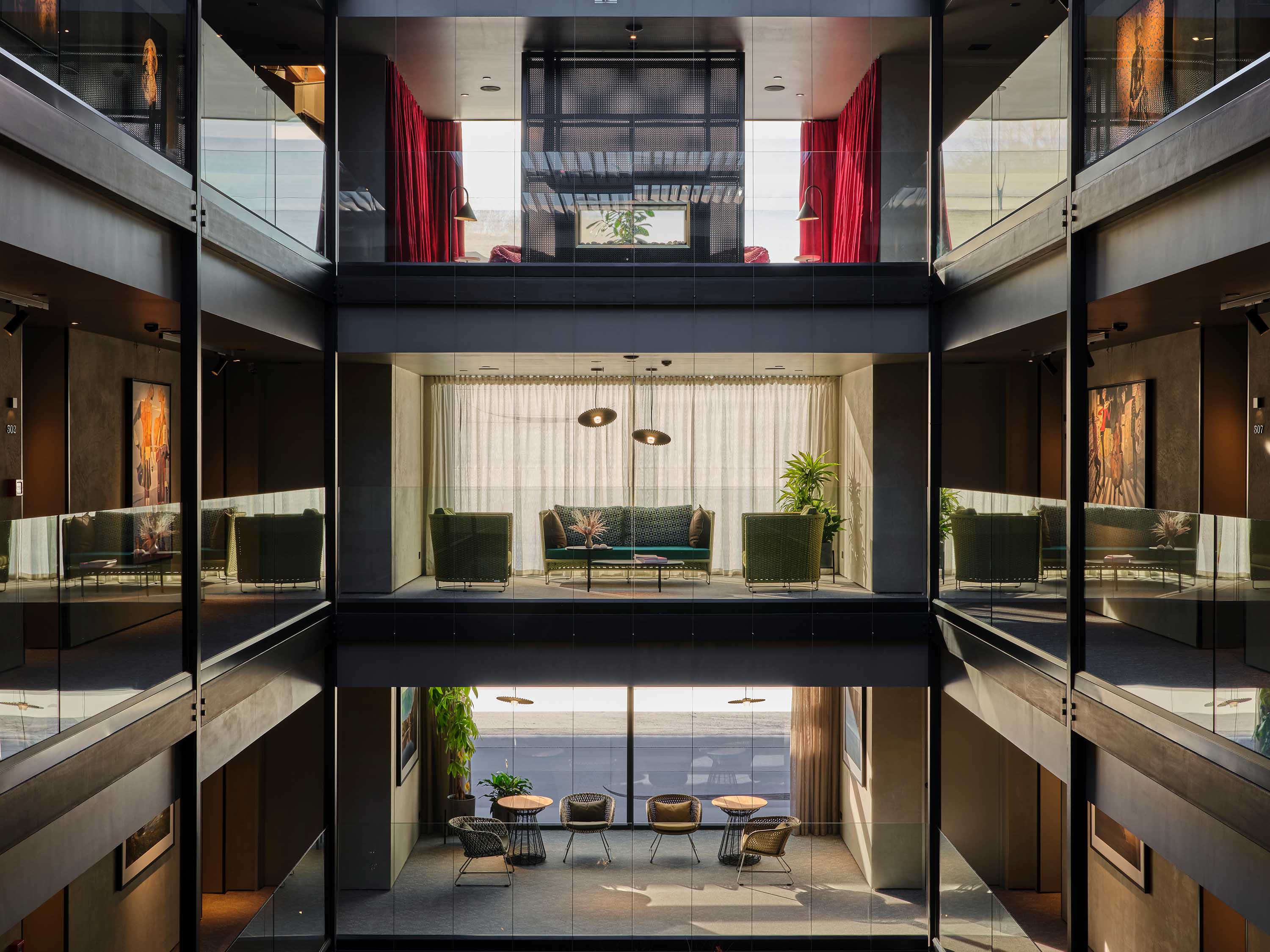 Each floor of the atrium hotel has a gallery around the courtyard.

Down on the shore

A new boutique hotel in Ōtepoti Dunedin celebrates a much older history.

Each floor of the atrium hotel has a gallery around the courtyard. 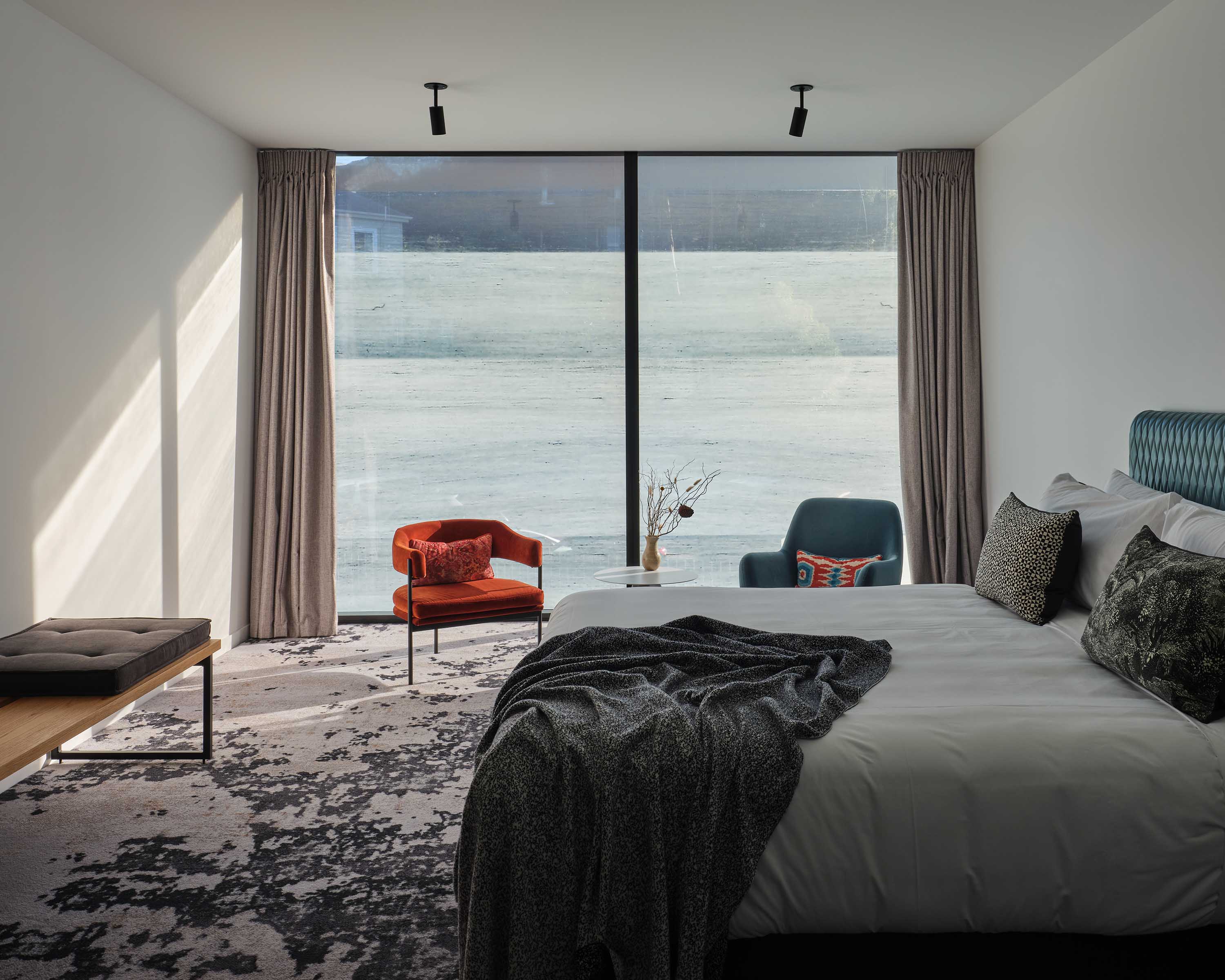 The rooms have a modernist elegance

You’ll find Ebb-Dunedin on a back street in downtown Ōtepoti-Dunedin, at the less desirable end of town. Less fine gothic architecture or lovely old warehouses here; more urban grit. There is a department store carpark out the front, and a block of old flats on the site behind, and retail either side. “It didn’t have a lot going for it,” admits architect Gary Todd, of his first visit to the site. “So we turned it in on itself.”

It’s a lovely building – a surprise in this part of town, with its scrappy mix of architecture. Four storeys in total, the full width of the block, and pleasantly low-rise, right on the street; three storeys of elegant glass façade, lifted up on steel framing, with open glassy spaces housing a cafe and reception underneath.

In essence, it’s two blocks of rooms, one along the front and one along the back, with galleries around the courtyard in the middle connecting the two. You can see the structure of the place throughout, all black steel framework with plaster panels in between. The carpark behind is reached through a breezeway that runs under the building.

The area wasn’t always so scruffy – in pre-European times, this was the edge of the harbour; here, Māori pulled up their waka. It was to that history that the owners of Ebb looked when they built the place.

Instead of a conventional glass façade, Todd and clients commissioned an artwork from painter Simon Kahn depicting that history, which is transposed across the entire front and back of the building. The rooms are screened and at certain times of the day the building reflects those around it. The hotel hides in plain sight.

The rooms have a modernist elegance 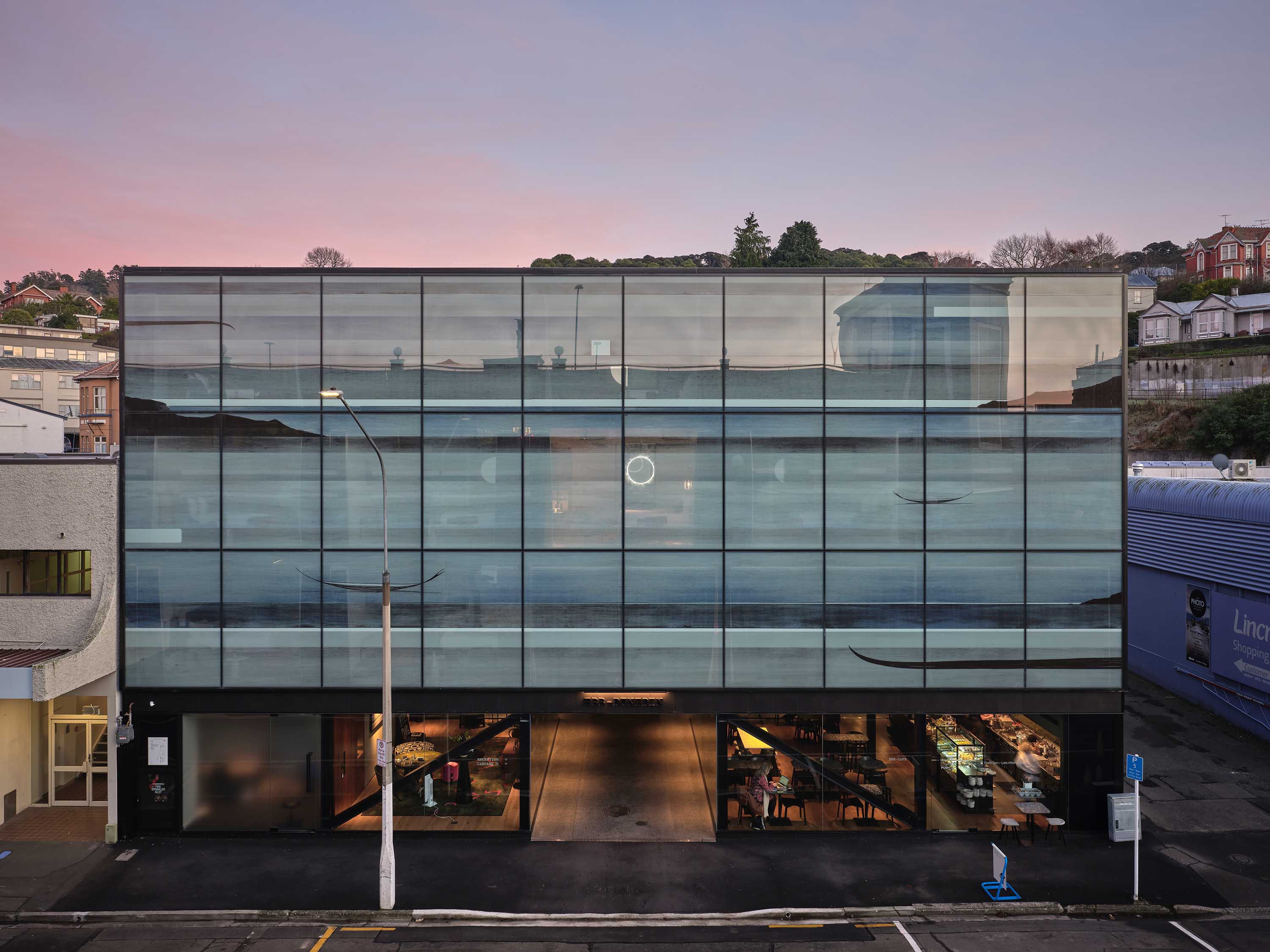 Three storeys of glass façade are supported on steel framing 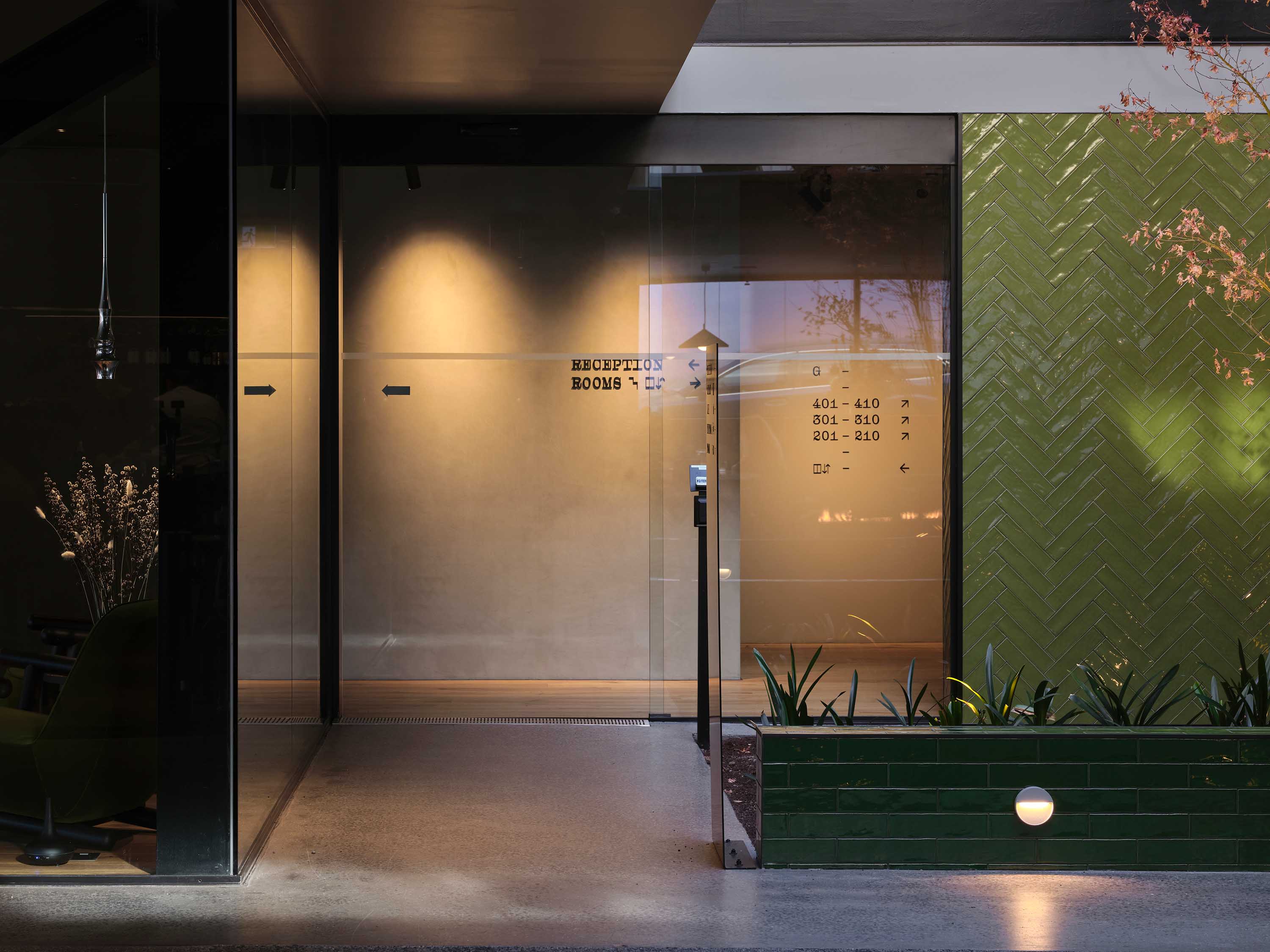 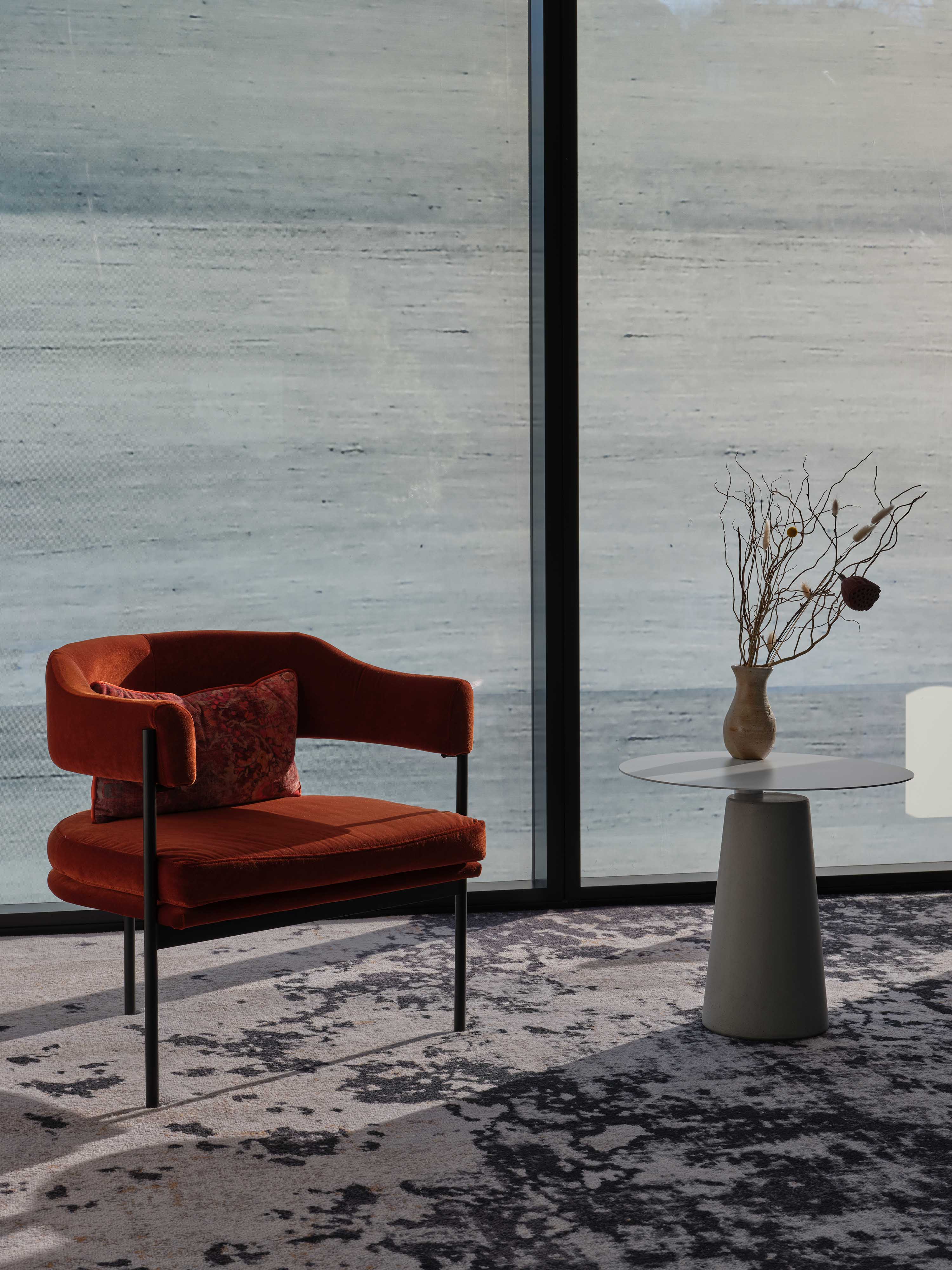 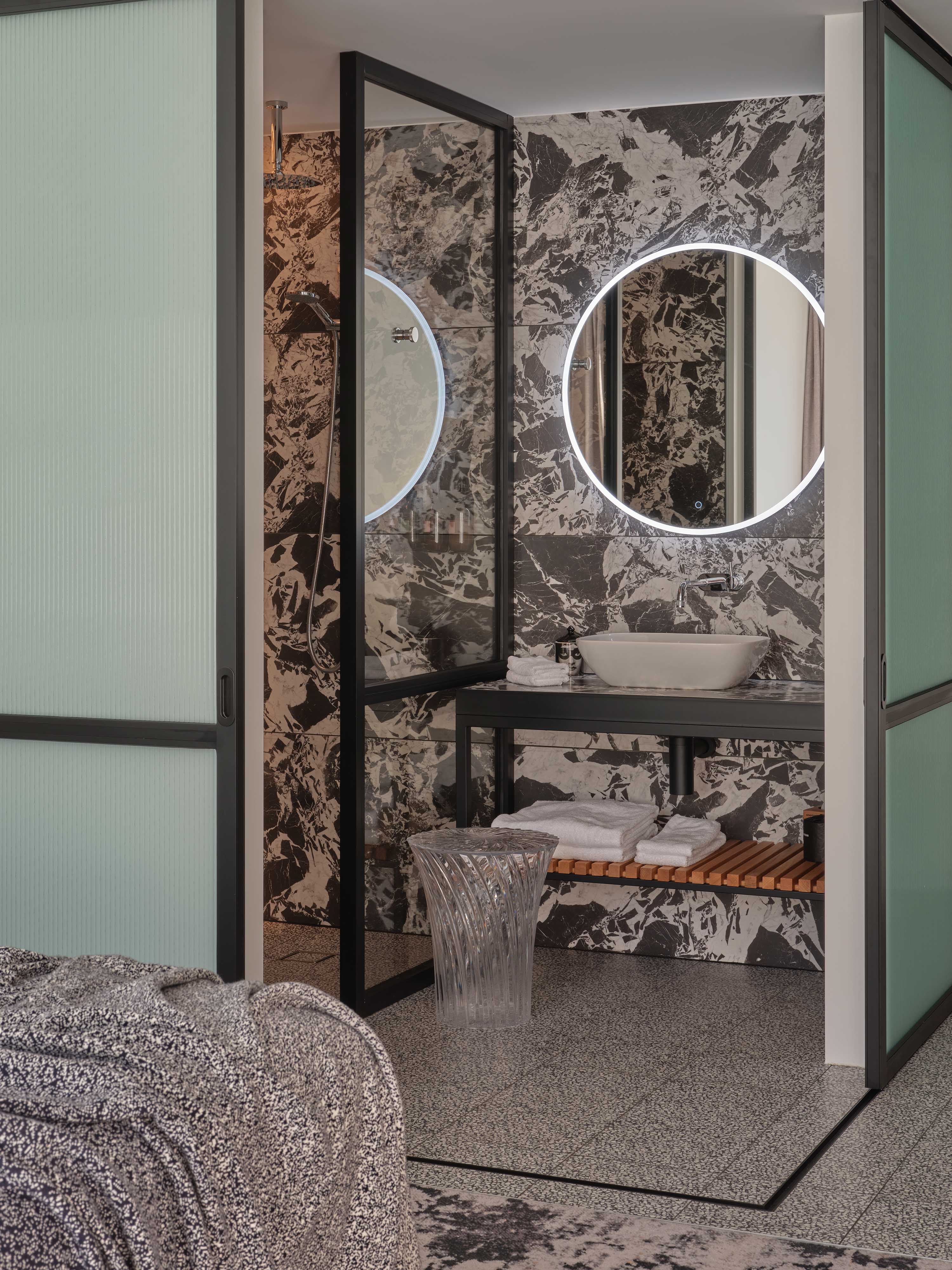 Sparkle side table by Tokyjin Yoshioka for Kartell in the bathroom.

Todd is better known for designing houses: this is his first hotel, but many of the same principles apply – and that’s where the courtyard really comes into play. “It’s nice to have different places to go at different times of the day,” he says. Normally in a hotel you have a foyer, a corridor and a room: the room is your domain, and the other spaces are ones to pass through.

Here, you have the cafe and reception, and open-air galleries around the courtyard, with public spaces at the end in which to sit with a glass of wine. “It’s an interactive space,” says Todd, “you’ve got this transition between what’s intimate and what’s exposed.”

Then, when you get to your room, you get another surprise – there’s a softness, a modernist glamour to the fitout. “Our approach wasn’t to think about how to soften,” says interior architect Sally Indyk, “but rather how to create a modernist interior that reflected the integrity of the architecture and would be really comfortable, surprising and innovative.”

Just before it opened, a consultant originally from the UK visited the hotel with Todd and noted how like a European building it was, with an open courtyard in the middle open to the weather. “It wasn’t conscious,” he says, “but we’ve done a contemporary version of something that’s been around for centuries.”