Herbst Architects present an intriguing yet harmonious show of contradictions in this family hideaway at Matapōuri Beach. 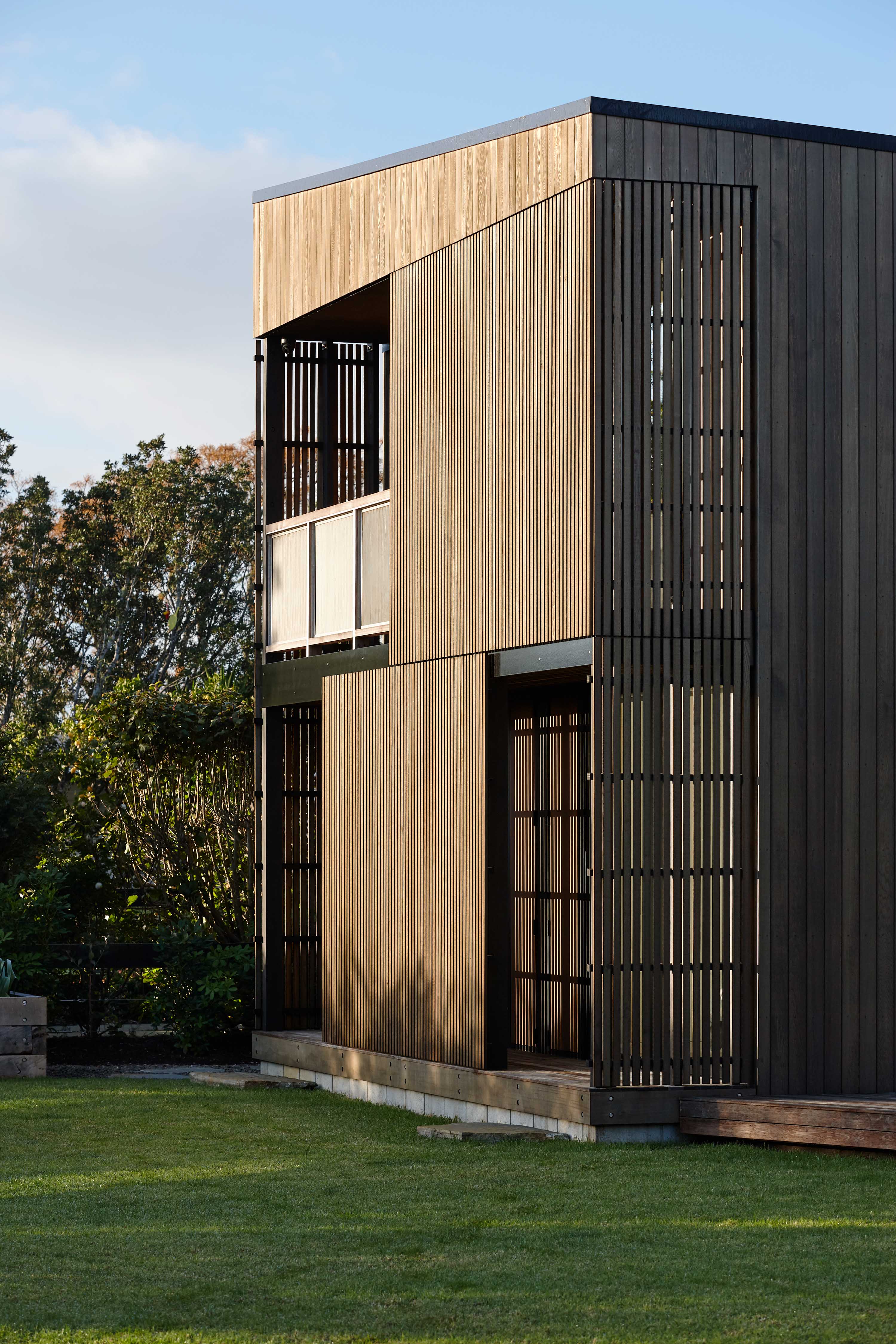 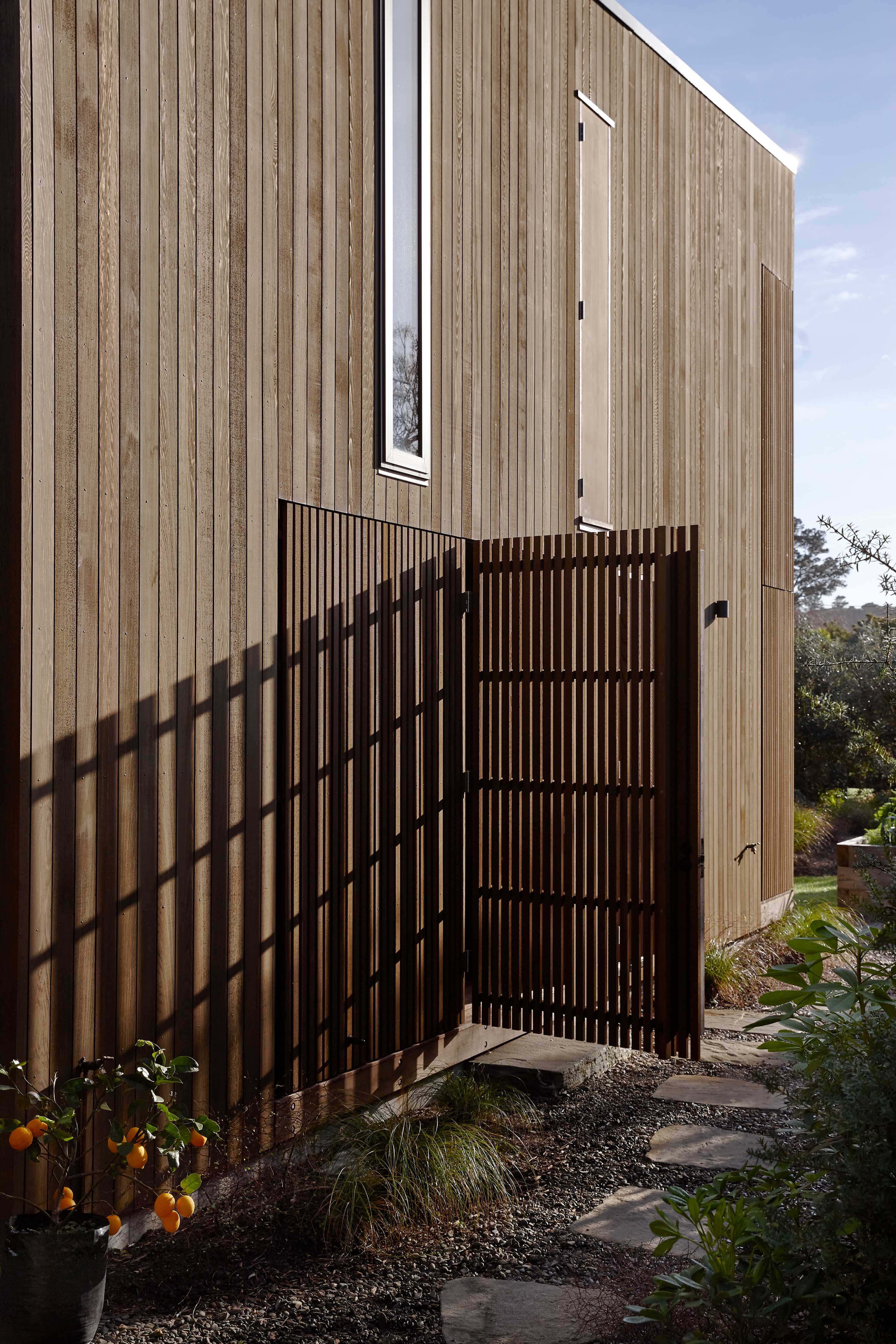 To listen to Charlotte Ryan's Spotify playlist inspired by this house, click here. Beginning and ending, openness and concealment, shade and light, veiling and unveiling, linear and curving, suspension and solidity. As much as poetic juxtaposition is the architect’s prerogative, it’s something that requires delicate handling.

Matapōuri Beach on Te Tai Tokerau Northland’s Tūtūkākā Coast, where the land wraps the crescent bay, is a pretty spot. Its white sand and Mermaid Pools are charming – a place of “Blue Lagoon dimensions”, says Nicola Herbst, of Herbst Architects.

The holiday house they designed for Jon Raby and Annabel Kristensen is a five-minute walk to the beach and sits on the outer edge of a subdivision of about 40 homes, with a panhandle arrival at the end of a cul-de-sac. The privacy of the site is compromised to the south, east and west, though tracks lead to a bounty of white-sand beaches including the iconic Whale Bay.

“The main thing about the building is that it is responding to the site,” says Lance Herbst. And this response is experienced at the very outset – on arrival, before you engage with the big design moves that counter the natural and imposed forces of the site.

The triangular arrival sets up a gentle approach for the visitor, allowing you to acclimatise to the house before entry. As you leave the street, the experience is heightened; the home’s knife-sharp lines are juxtaposed with two sensuous curves embedded into the forecourt. These concrete rails, which guide the wheels of heavy boat-storage doors, almost have a lyricism about them, says Nicky. “Everything else is angles and rectilinear lines, and these curious soft shapes present really well.” Linear and curving.

A palm tree reaches through the roof, accentuating verticality. At the same point, stepping stones lead to a concrete platform that takes you up to the veiled entrance deck. Light slips through timber screens – there’s intrigue in not knowing what lies beyond. Veiling and unveiling.

As mentioned, privacy is compromised on three sides, partly due to public beach access along the rear boundary and to the right of the house. In response, the architects conceived of a home as an embrace, with two semi-autonomous arms – one to the east, one to the west – wrapping around the north-facing living pavilion, the inner sanctum of the home. The house’s back forms a sturdy wall to the south.

The two arms house the private spaces. The main bedroom suite is located on the second level of the family’s sleeping quarters; there are two more bedrooms at ground level. A laundry to the rear leads to an outdoor fish-cleaning bench. At the other side of the house, the guest suite has its own private, covered entrance, and fulfils the owners’ wish to allow their adult children and guests some autonomy. A taut skin of timber embraces these closed-down spaces, private pockets hunkering into that solidity, with screens and shutters in various configurations to provide ventilation, select views and privacy.

The arrangement exists in contrast to the elongated open-plan living space. It’s this generous area, and blurring of inside and out, that welcomes you as enter the home. Behind the veiled screen at the entrance is a sunken landscaped courtyard. From here, a timber boardwalk leads to a lanai with a fireplace, then into the open-plan kitchen, dining and living domain set on a concrete pad. Suspension and solidity.

The linear living pavilion is orientated along the widest part of the site, with rooflines tilted to let western sun flood into the lanai, and provide views to the hills. Light and shadow.

There are deep eaves and steps leading down to the lawn. A wall cavity in the living area consumes sliding doors and timber screens – inside becomes outside. The layers of screens bring the notion of privacy right up to the building face, creating permeability. “It becomes semi-private at the building edge and that’s a lovely notion for us to explore,” says Nicky. “The movement in these walls is more than a formal response – it’s a contextual response to make the building behave as we thought it should for the occupant.” Openness and concealment.

The owners appreciate the architects’ answer to the site, the light and their requirements. “When you start a project like this, you’re not certain what you will get at the end of it,” says Raby. “You get a pretty good idea through the plans, but it’s different when you are actually in the space. The thoughtfulness of many design aspects, such as the privacy and viewing windows, make it a great space to be in.” Beginning and ending. 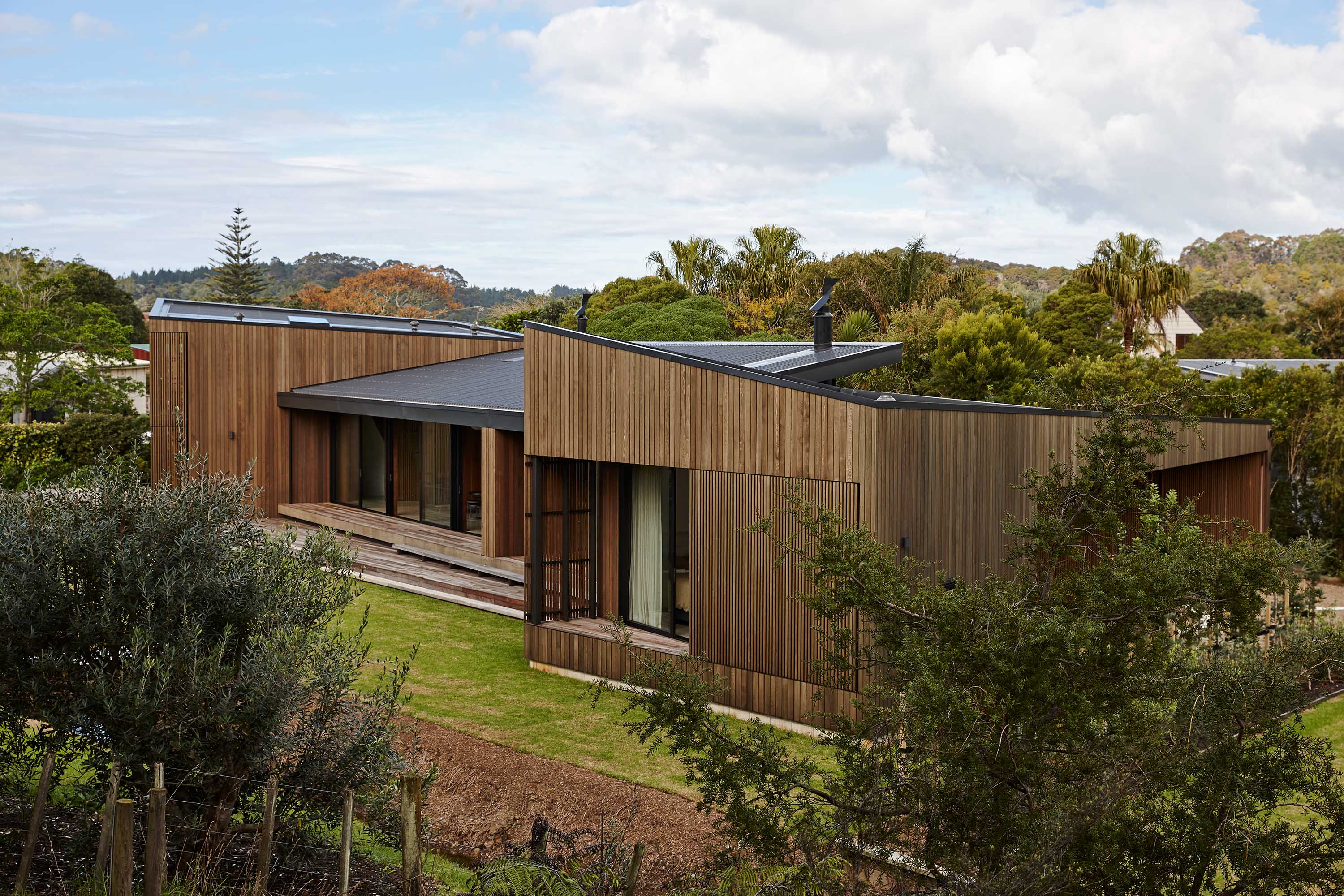 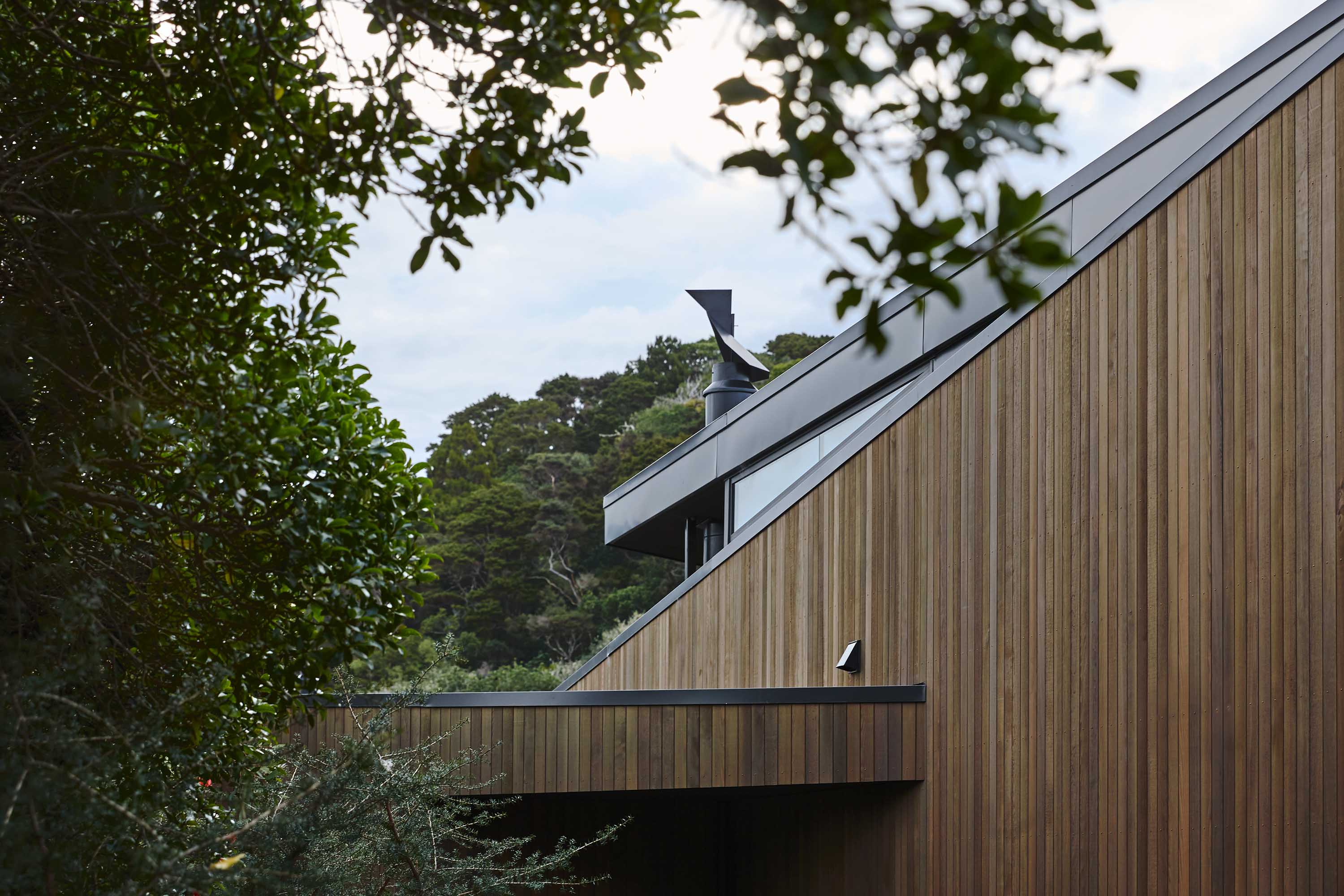 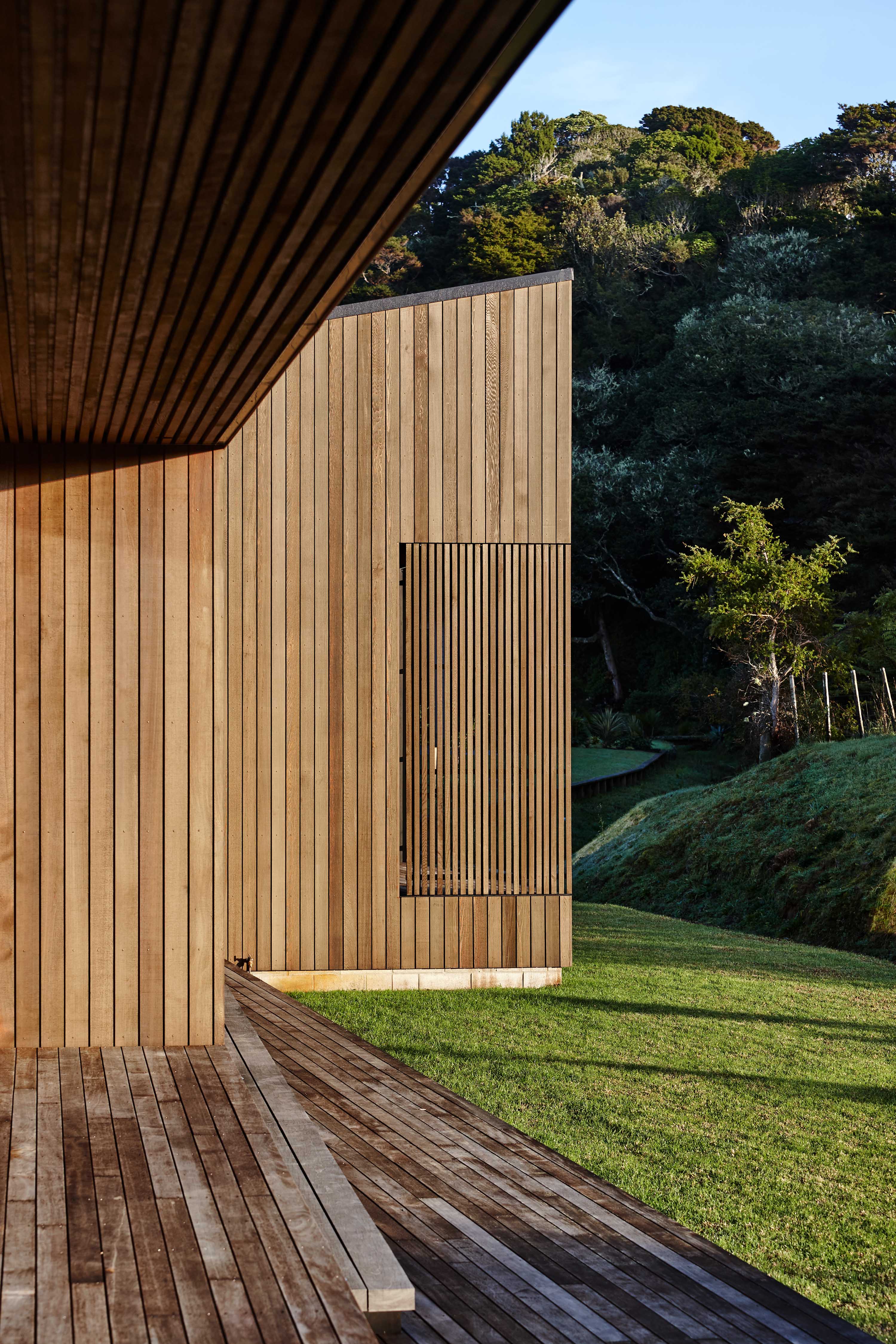 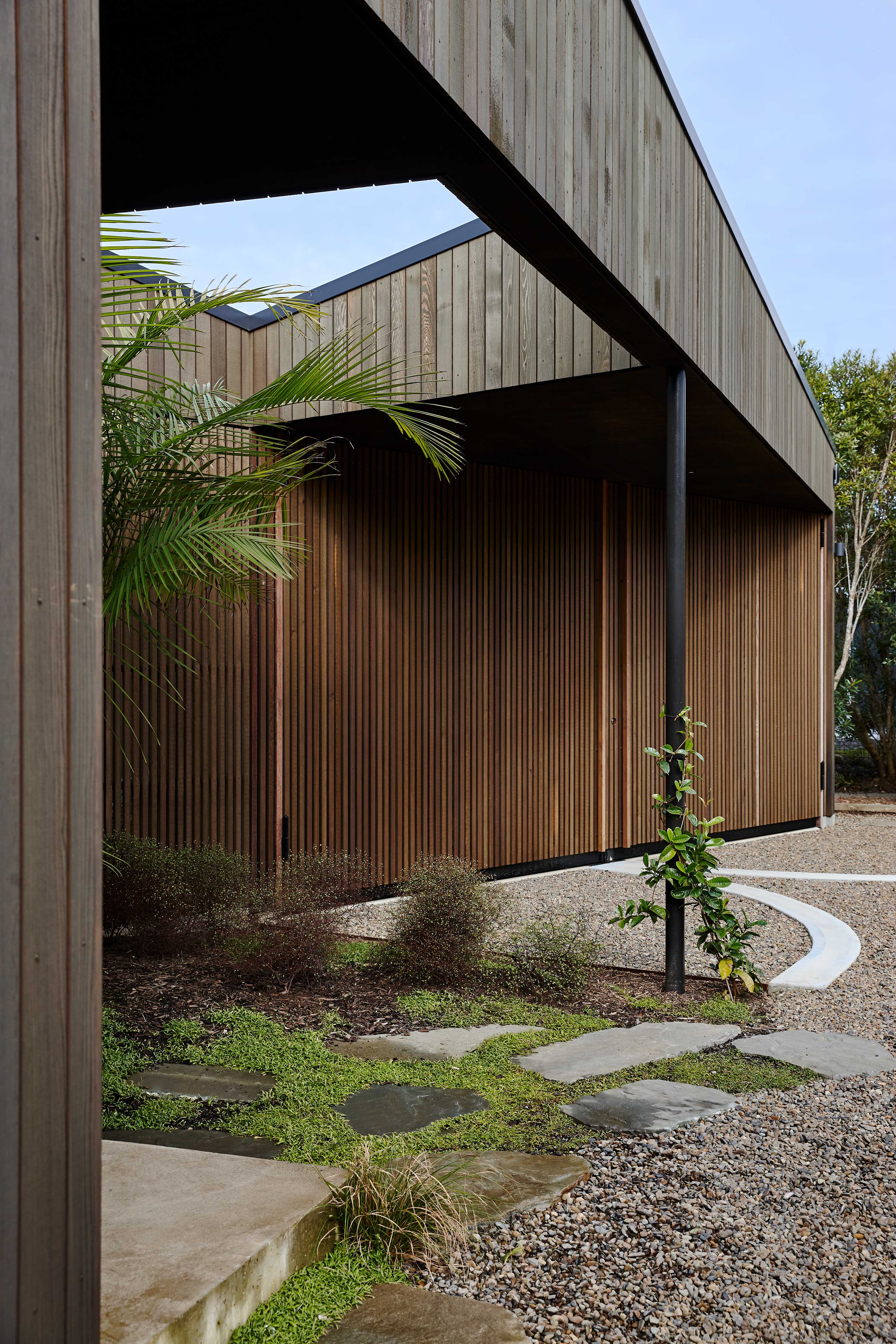 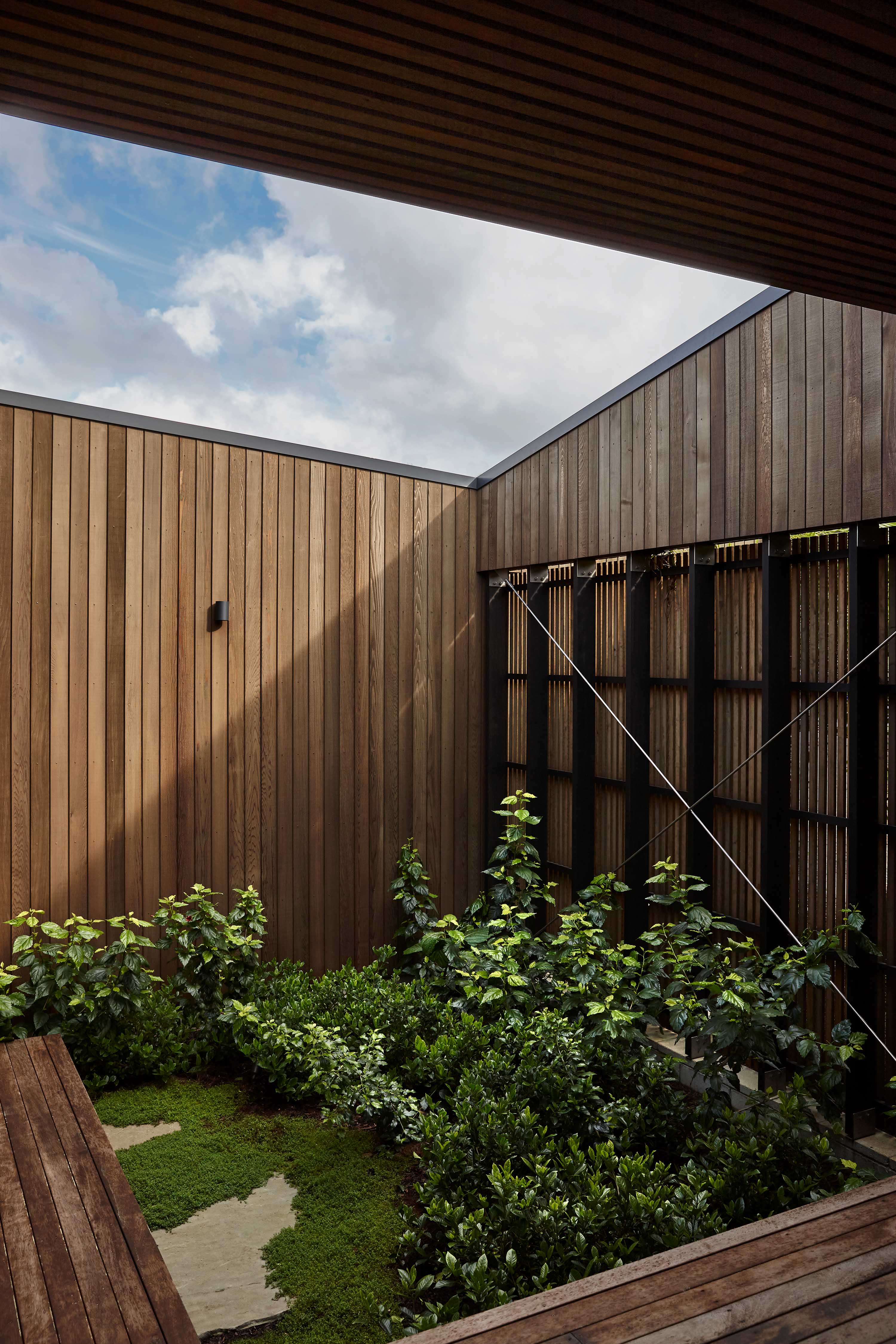 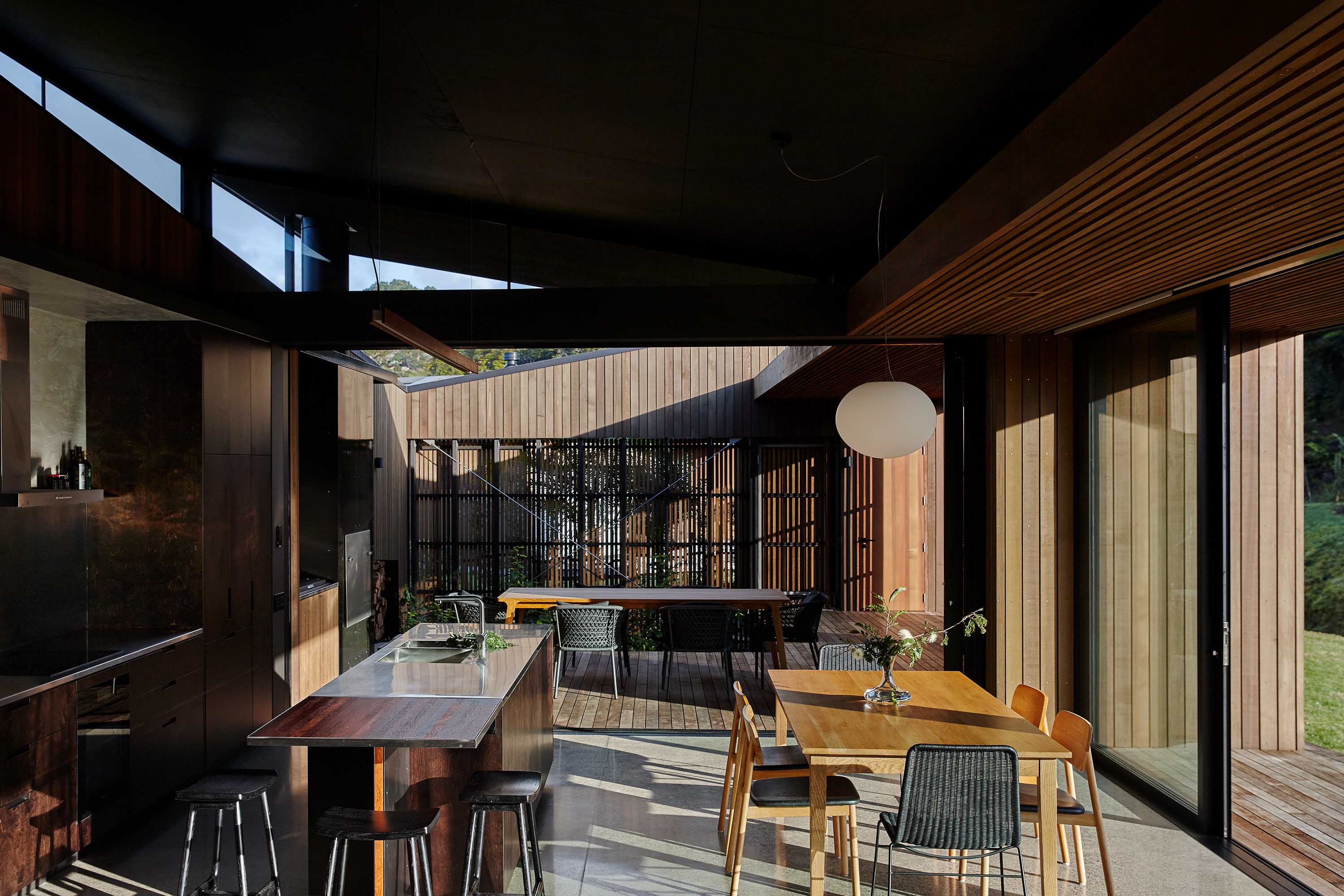 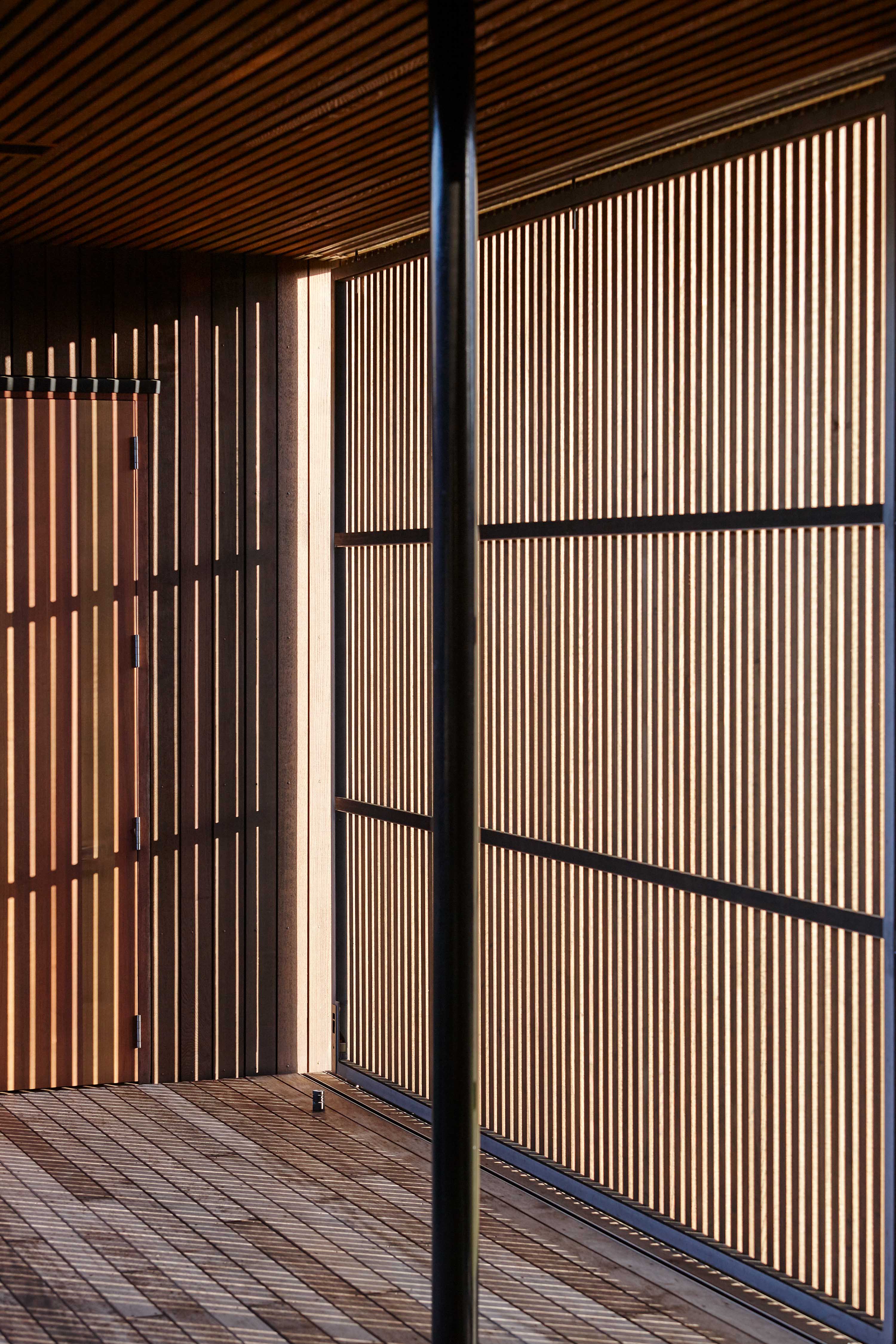 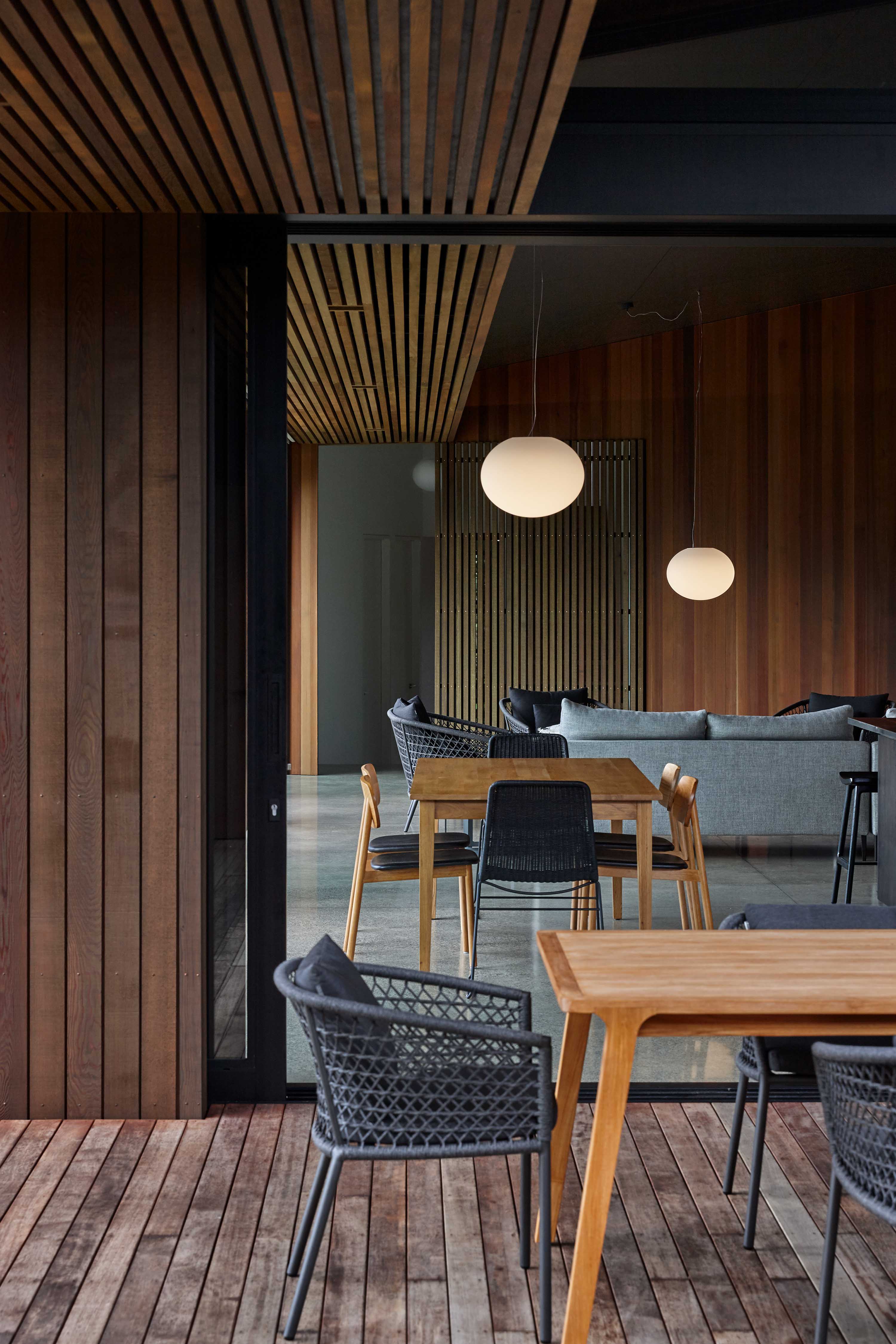 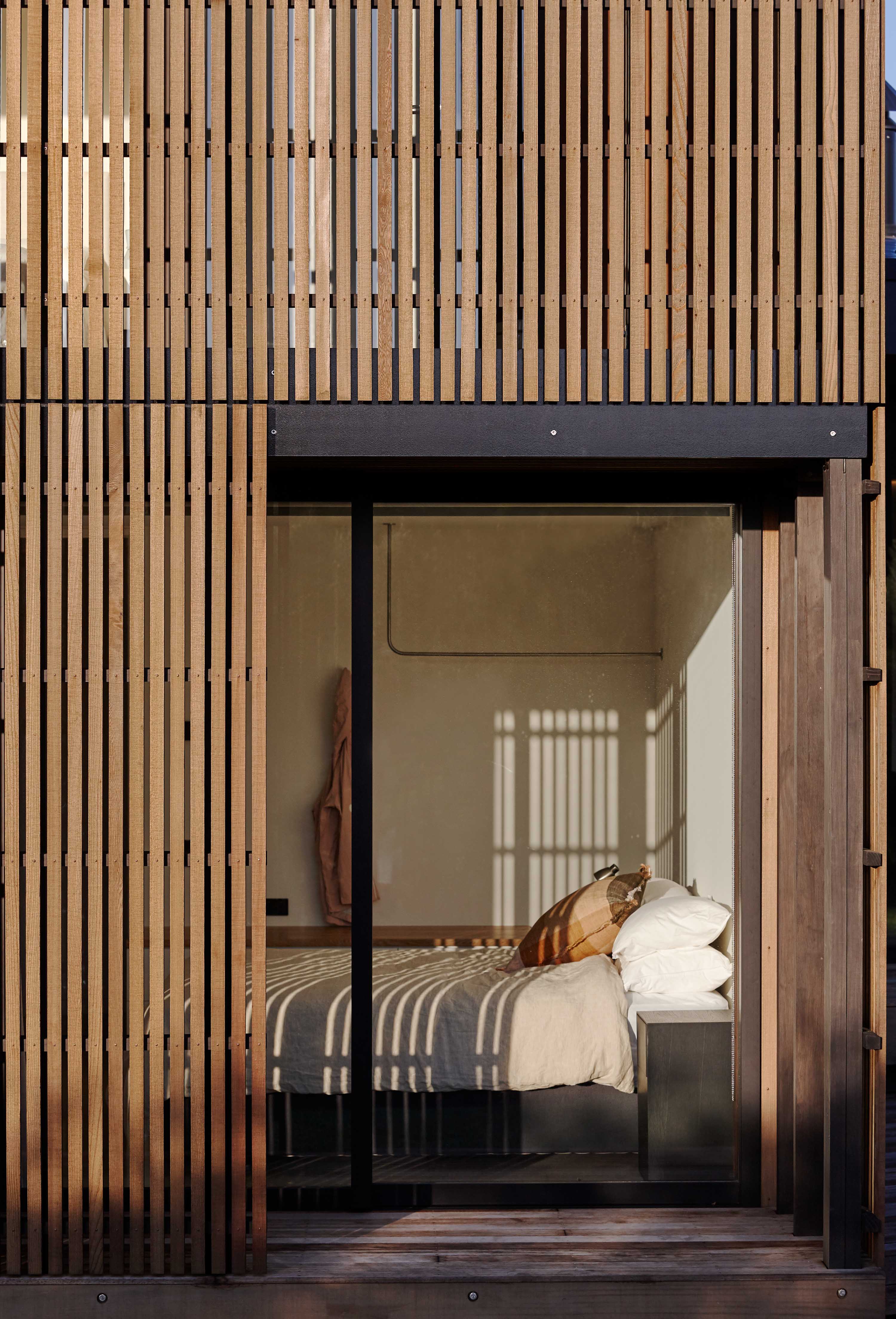 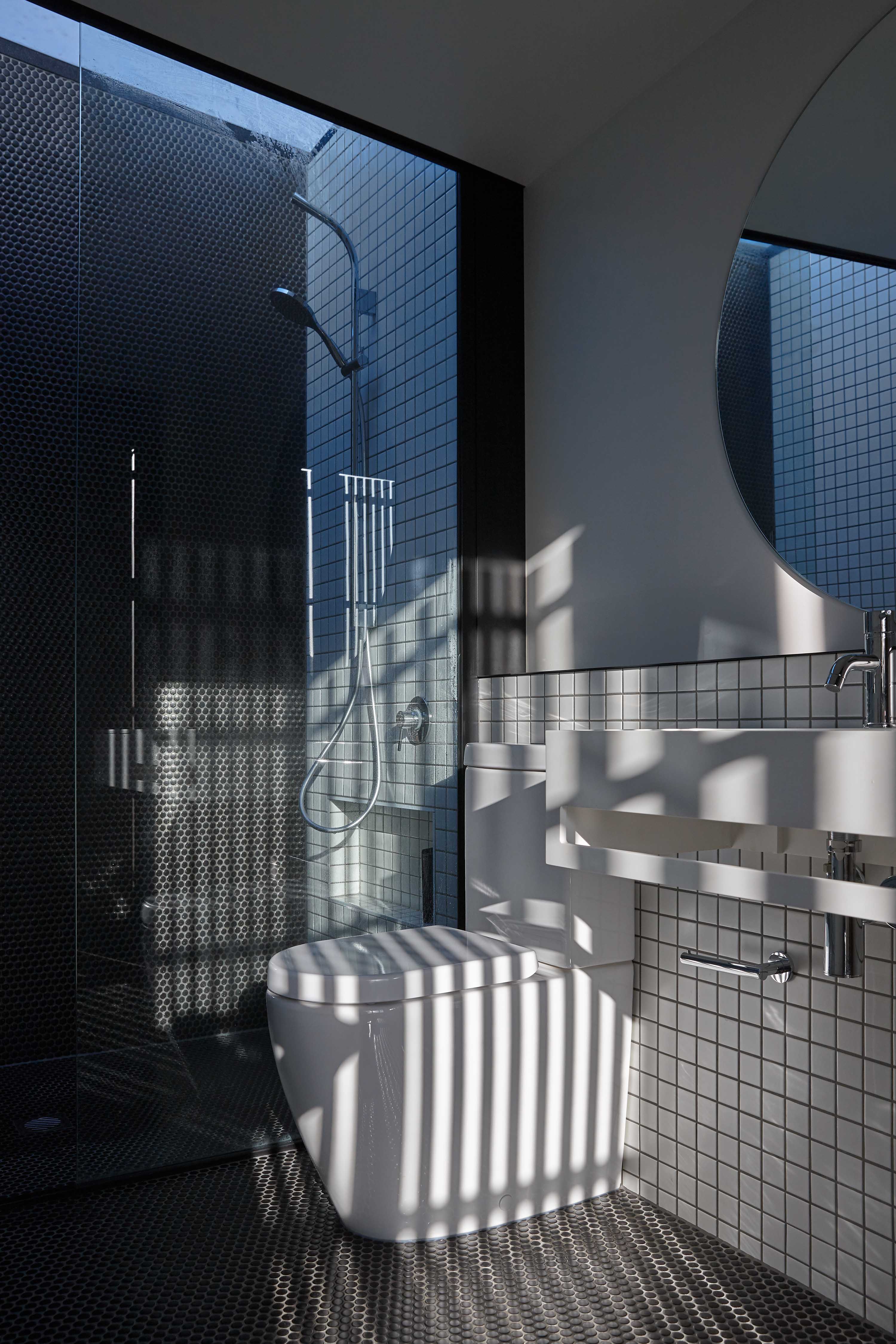 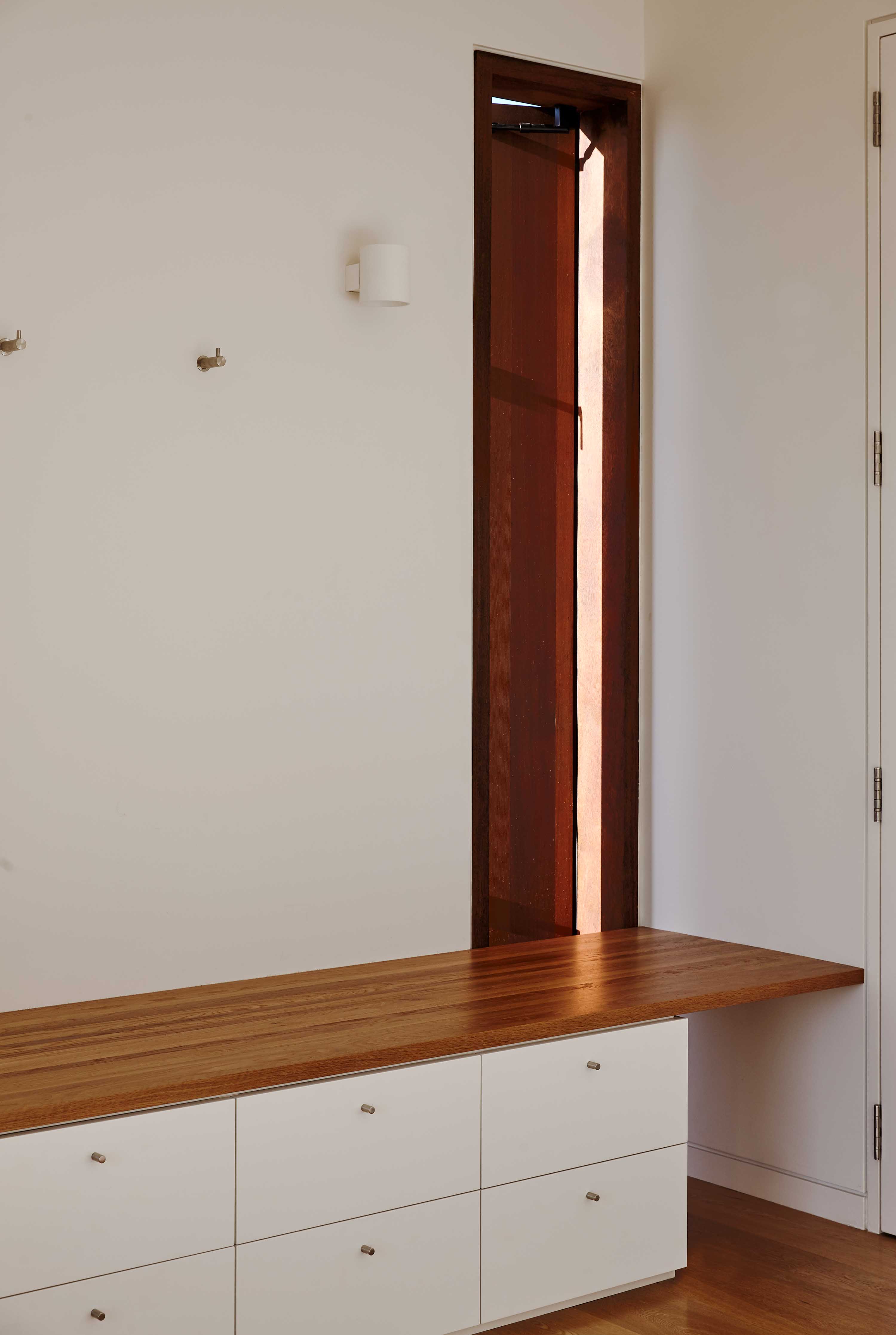 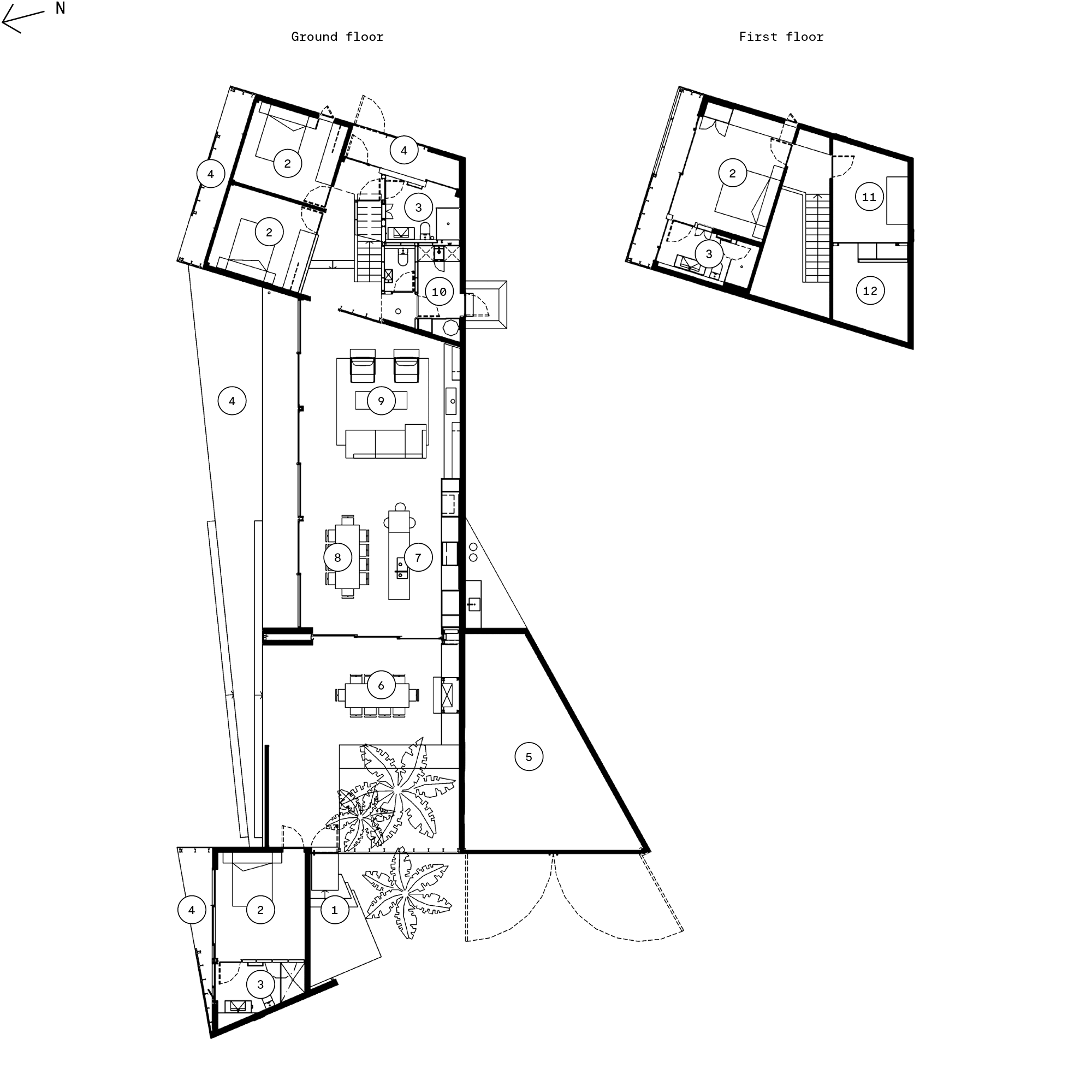