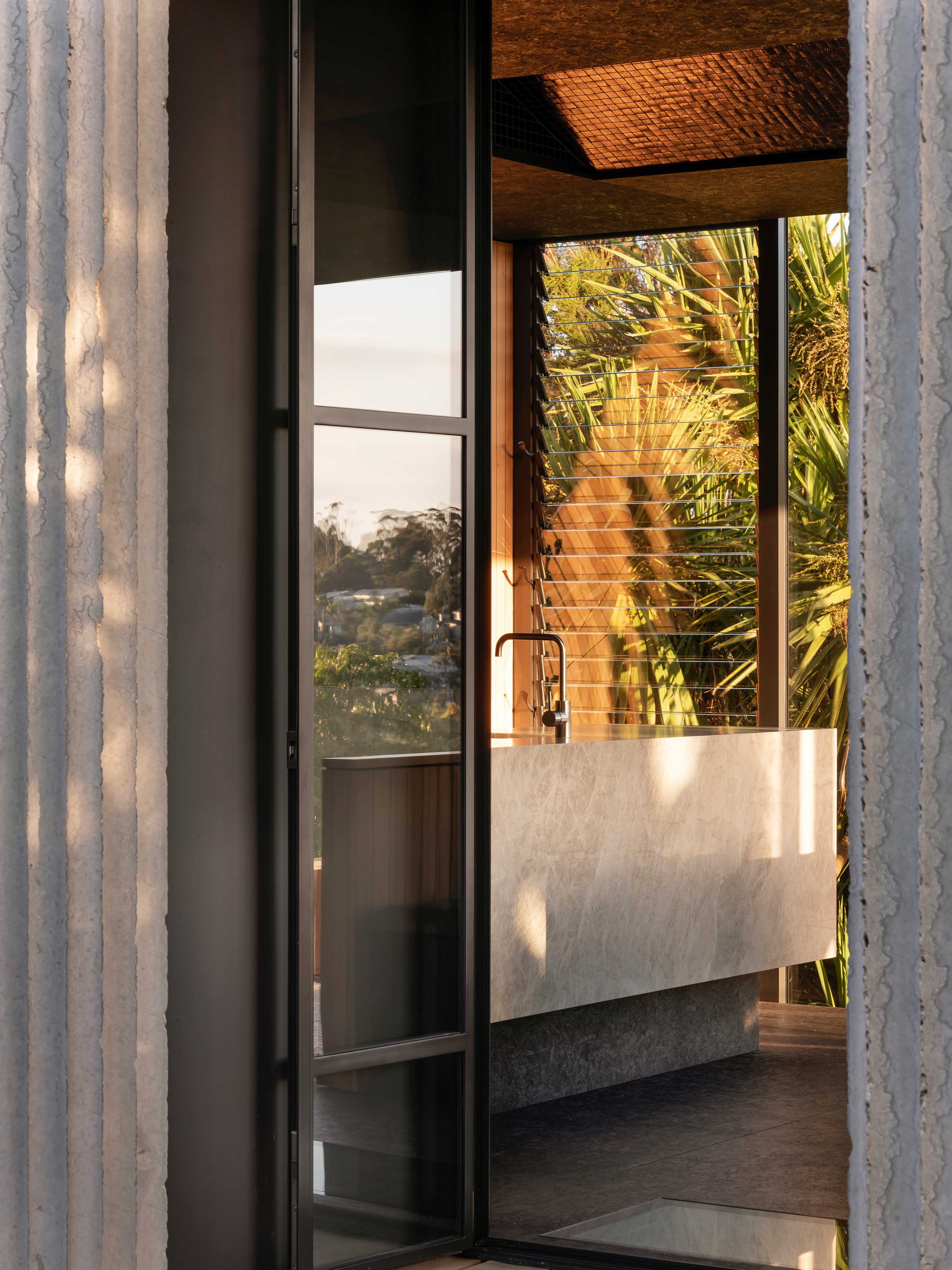 Playing chess and practising architecture have a couple of things in common – every move (until the last) involves choosing an option and rejecting others, and every choice has consequences. Success in both endeavours depends on calculating the knock-on effects of individual moves, some of them sacrificial, which push progress down a certain path.

Several big calls, each with implications for further decisions, were fundamental to the realisation of the brilliantly clever little house in Grey Lynn designed by architect Oli Booth. What made the project possible in the first place was the commitment by Booth and his wife and fellow Victoria University of Wellington architecture graduate Libby Elmore to collaborate with friends — also designers — to develop a subdivided lot as a mini compound. For the group, this was an option that enabled them to design and build their own homes in a now-expensive inner-city suburb of Tāmaki Makaurau. (The section is close enough to Auckland Zoo that you can hear the lions roar.)

Then, site selection: Booth and Elmore located their house at the rear of their 280-square-metre plot. This is the south side of their section, where the land falls away into one of the bush-covered gullies which are still such characteristic features of Tāmaki Makaurau’s suburban landscape. Pushing the house towards the bank and into the trees was an initial move that opened opportunities but also presented obvious challenges. The house’s placement allowed the couple to achieve some privacy and separation from the little community of neighbouring buildings, and provided space for a front courtyard. This area, designed by landscape architect Xanthe White, is defined on its north side by a secondary structure that serves as the studio for Booth’s practice, and a guest bedroom.

The other advantage of this building site is its elevated aspect to the south and west, an outlook that encompasses Western Springs Park and a section of the Northwestern Motorway, its constant motion hushed by distance and double glazing. To gain the height for the view, the house had to be firmly anchored to the ground. And so to the challenges of building a house, even one kept small to control costs, on the edge of a steep, south-facing slope. A quarter of the budget, Booth says, went into the ground. A four-metre cut and six-metre piles support the building platform for a two-level house 8.5 metres wide and five metres deep.

Besides its modest footprint and geotechnical exigencies, and the preference for privacy, views and usable outdoor space, another key element in the project’s matrix was the treatment of daylight. The house embraces the orientational logic of the site in such a way that it sets itself against the sun, with concrete panels constituting the north face. (Here the house presents as a single-level building.) The crafting of these panels, which frame the front entrance, has turned a wall into sculpture. In the signature move of the design, dozens of cardboard tubes were used as formwork to fabricate slender concave columns, rough-edged so as to produce changing patterns of light and shade throughout the day. This audacious renunciation of northern light is a welcome riposte to the common Auckland practice of pointing fully glazed façades towards the sun, and the subsequent combinations of window screens, blinds and Blu-Tacked paper that make habitation possible.

The light admitted into the house by extensive glazing on its south and west sides is augmented by a 4.2-metre slot cut into the roof of the upper level. A section of glass flooring at the front door, meanwhile, brings light into the lower level. (Acrophobes might feel uneasy when confronted with this feature: should the glass be walked on or jumped over?)

Inside, no space is wasted. Booth says one imperative was to achieve a sense of generosity in what is a tightly organised 85-square-metre house. Storage has been neatly accommodated wherever possible: into kitchen fittings, such as the raised island bench, and in recesses in the building envelope. The taut planning is reminiscent of – although the execution is perhaps more sophisticated than – the small, efficient, affordable “Box” houses designed a generation ago by Wellington architect Gerald Melling. There’s an echo of Melling’s customary  900-millimetre grid in the equivalently scaled staircase that Booth has adroitly tucked into the north-east corner of the plan. Every effort has been made to expunge clutter and visual distraction. An absence of horizontal framing maintains the floor-to-ceiling flow of the upper-level windows, and at the southwest corner, no vertical frame gets in the way of the big view.

Design dexterity has more than compensated for budgetary limitations here. The project is characterised by the imaginative specification of relatively inexpensive materials, notably the black-stained Strandboard that lines the ceiling. Richer materials, for example the salvaged tōtara used sparingly as interior cladding, have been deployed to telling effect. Booth and Elmore allowed themselves one little splurge — the tile-lined sunken bath on the lower level.

Booth is hardly a novice – he founded his practice six years ago, and he has 15 projects on the go – but the Grey Lynn house, produced with Elmore’s assistance, is a classic young designer’s own home. Part pavilion, part tree house, part viewing platform, the property is also a testing ground for ideas, an advertisement for talent, and proof of an ability to navigate a demanding project, right from opening gambit to successful endgame. 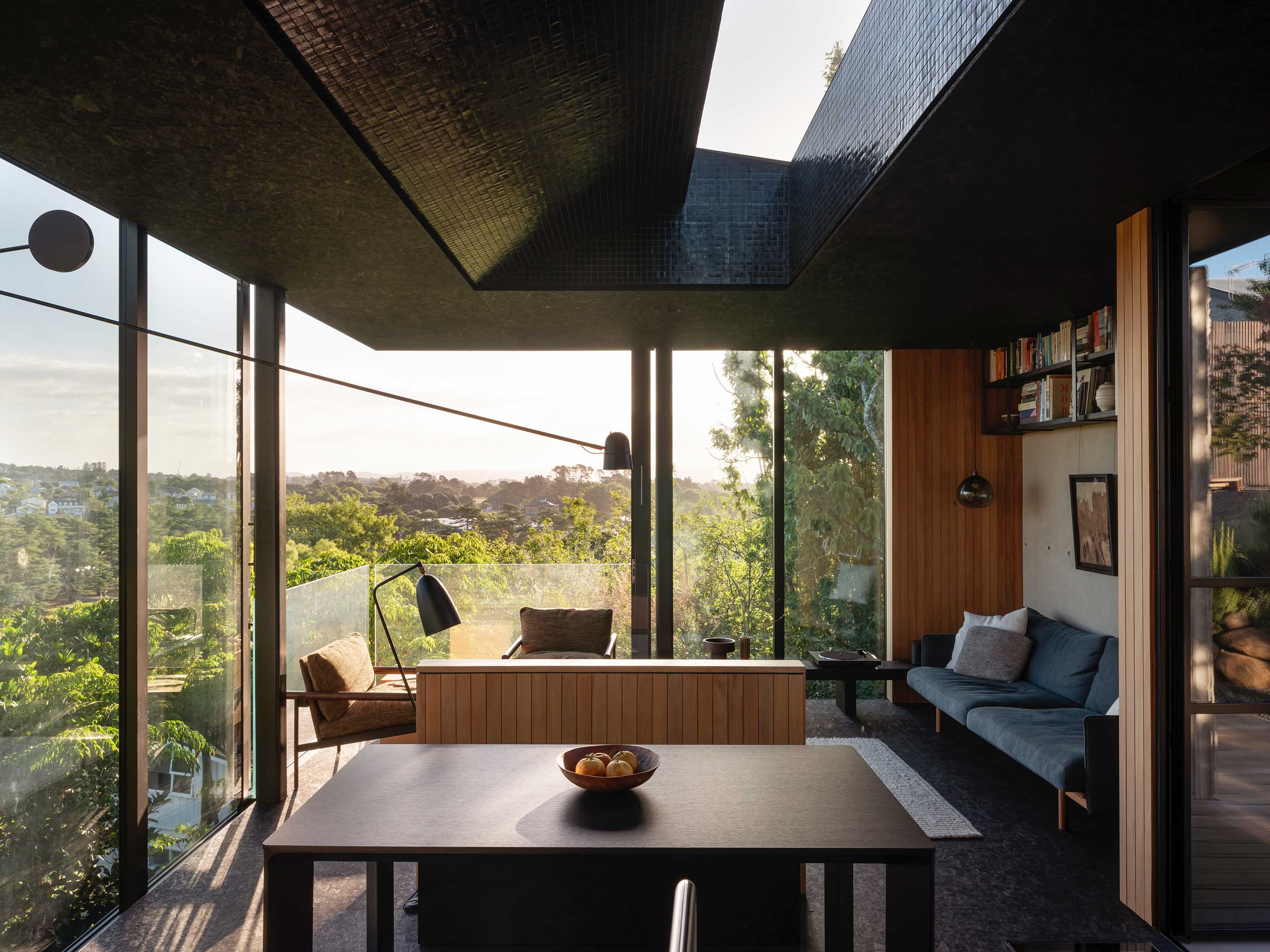 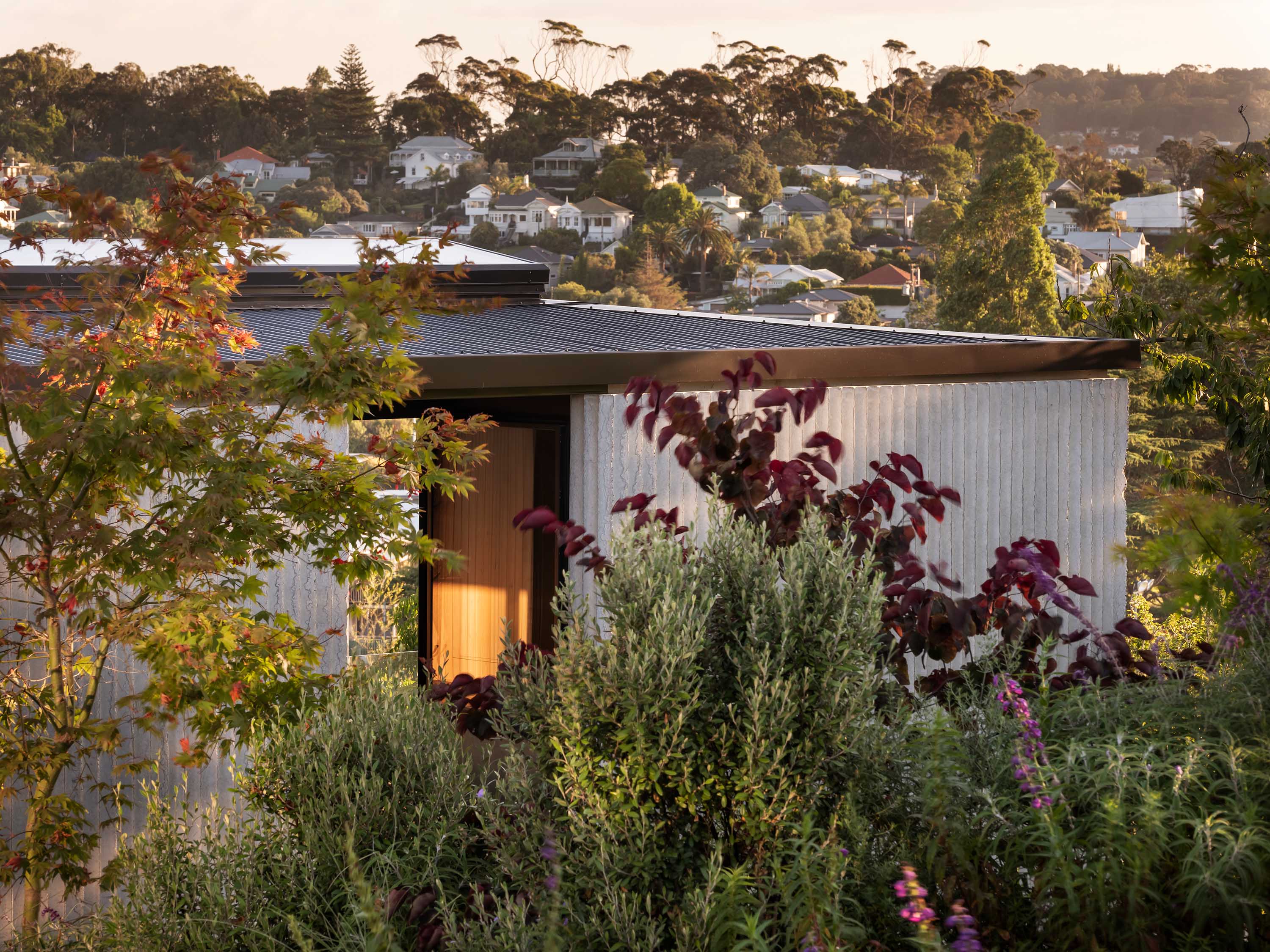 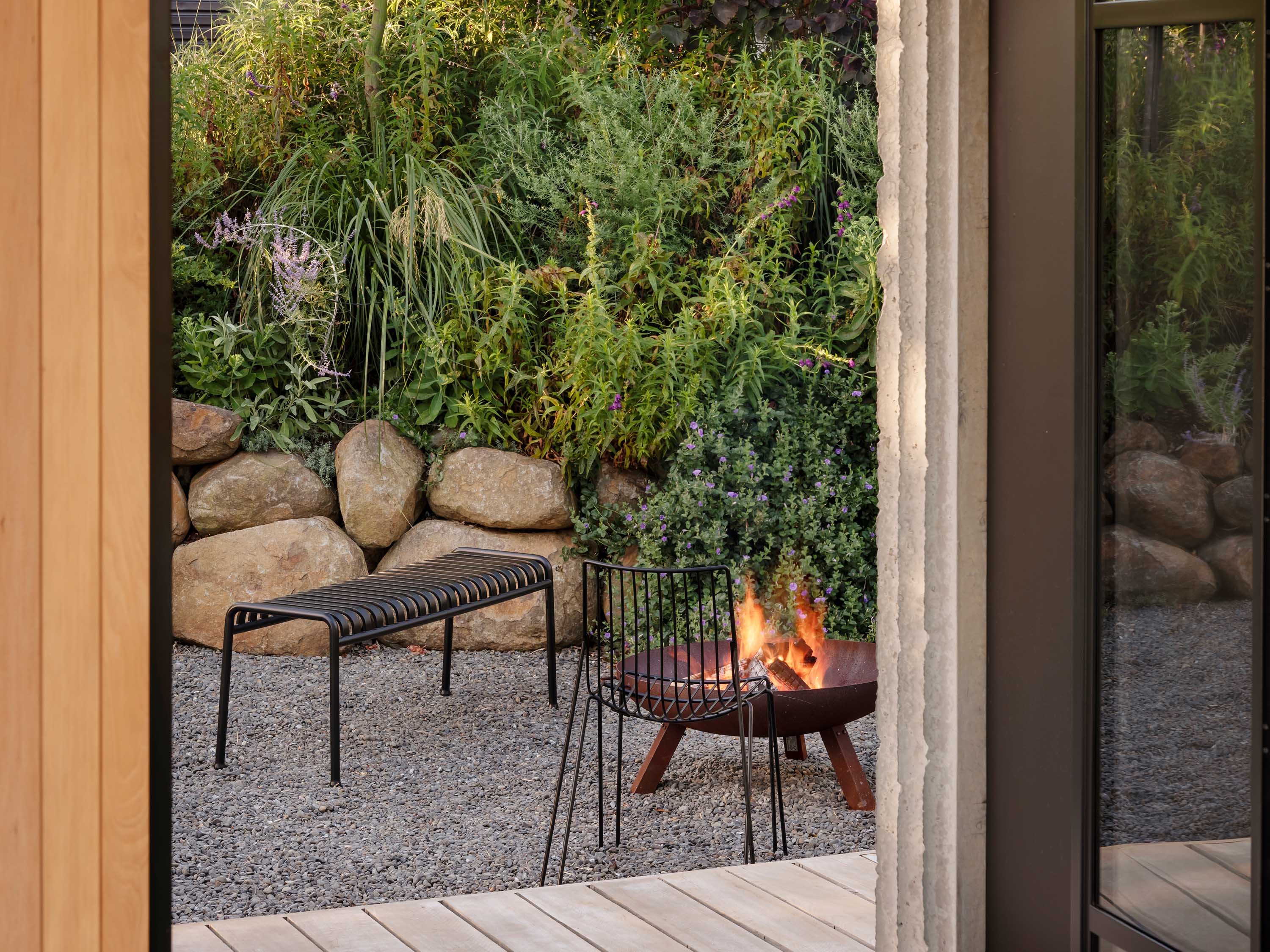 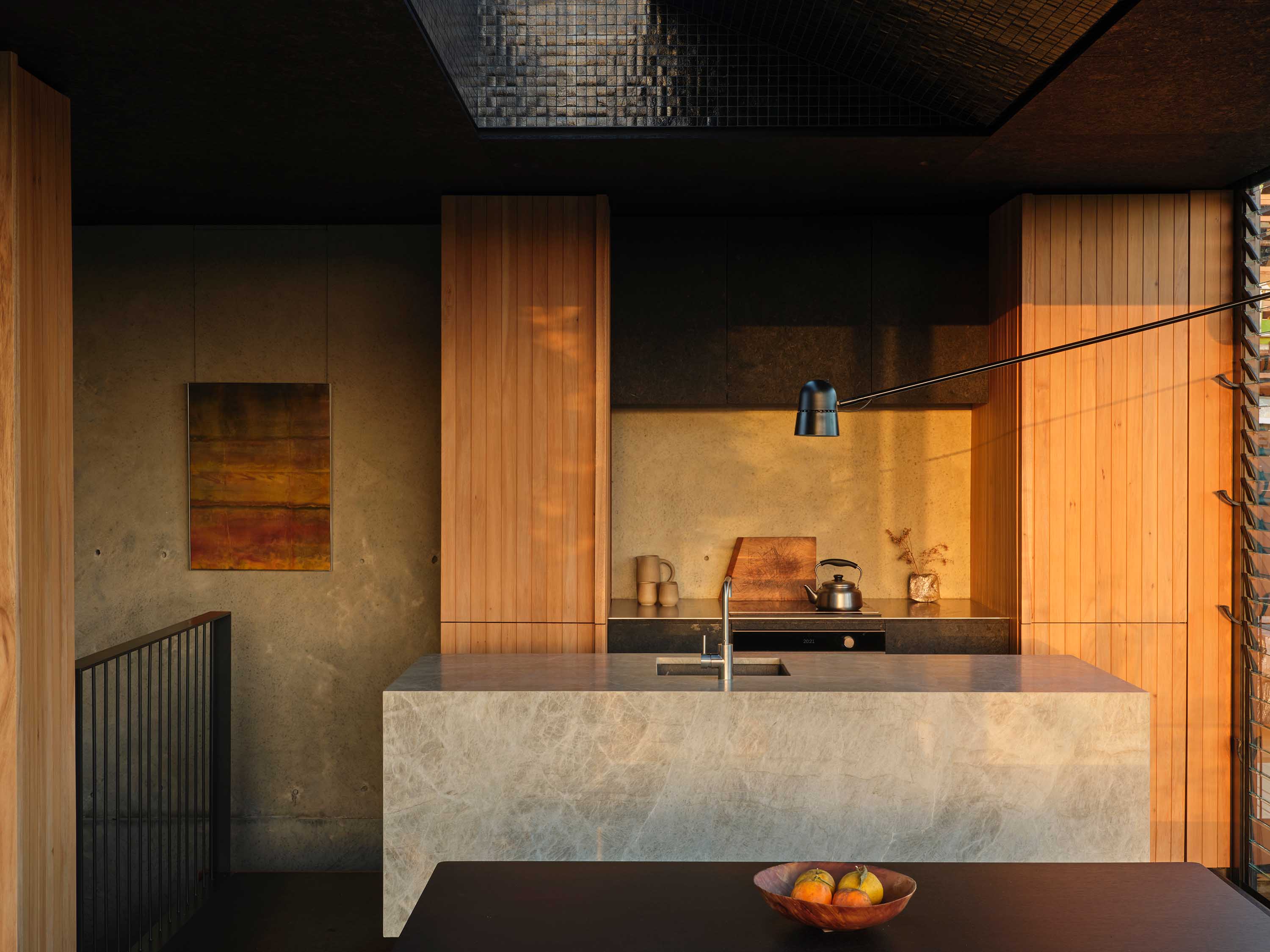 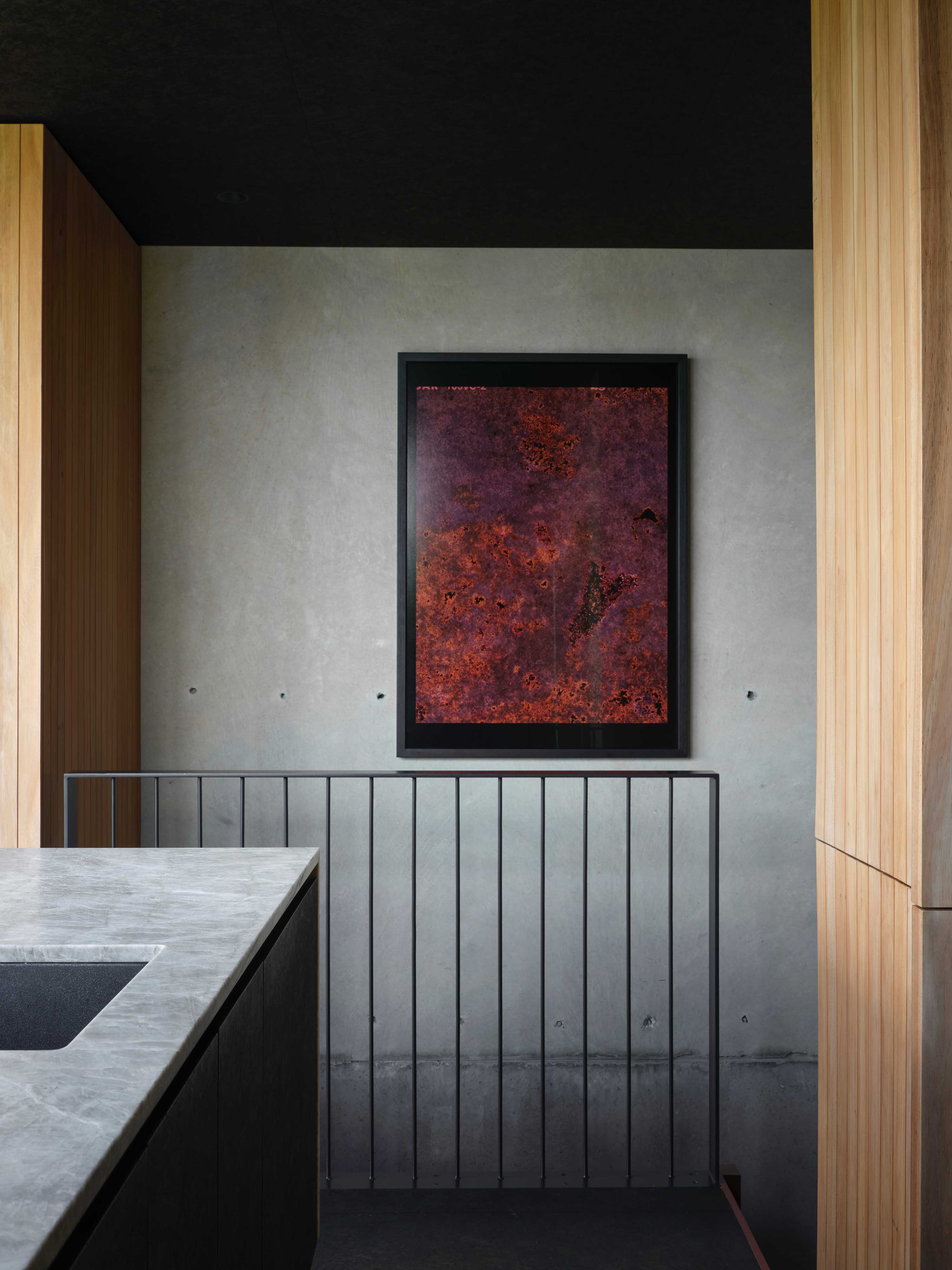 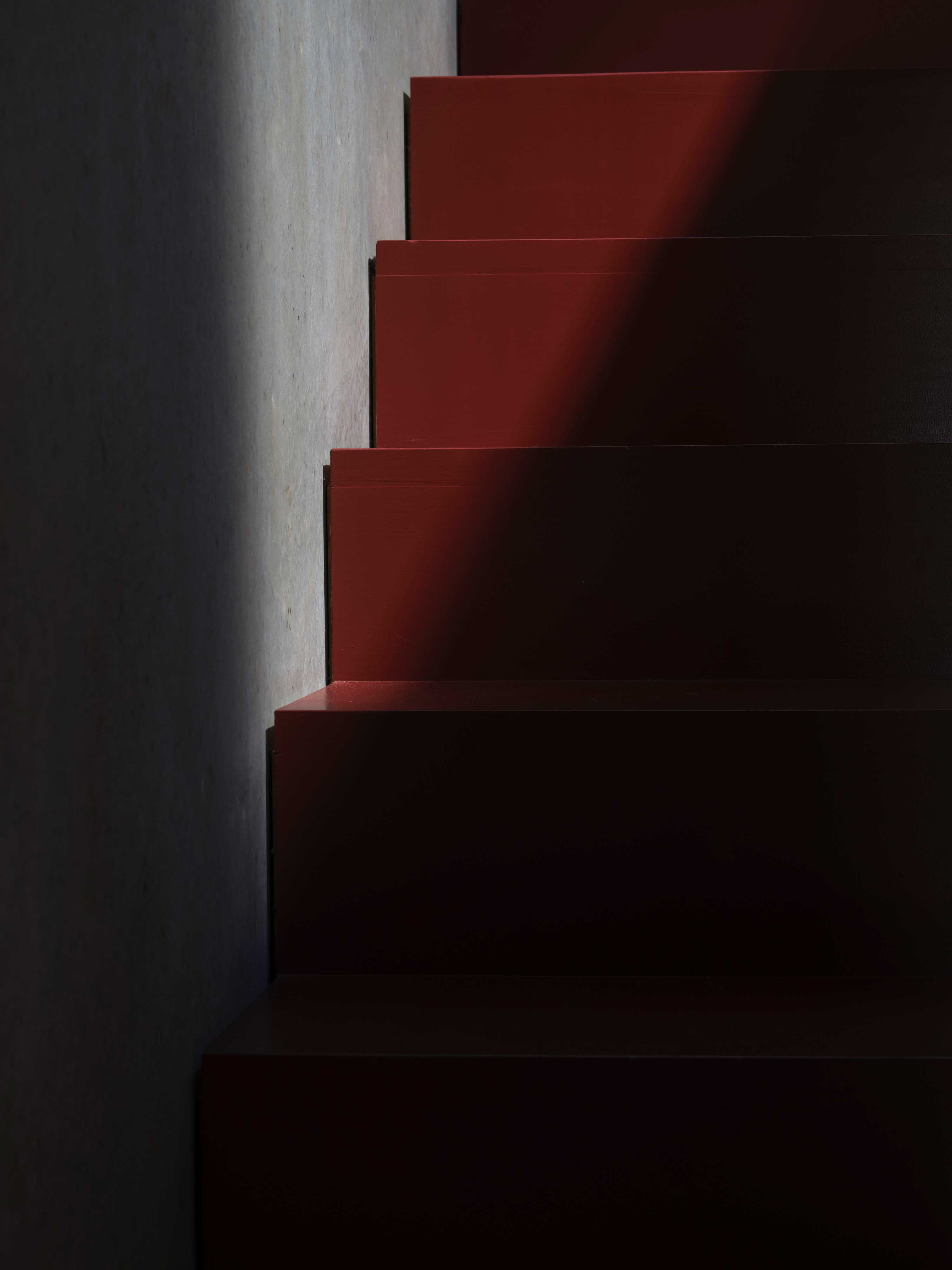 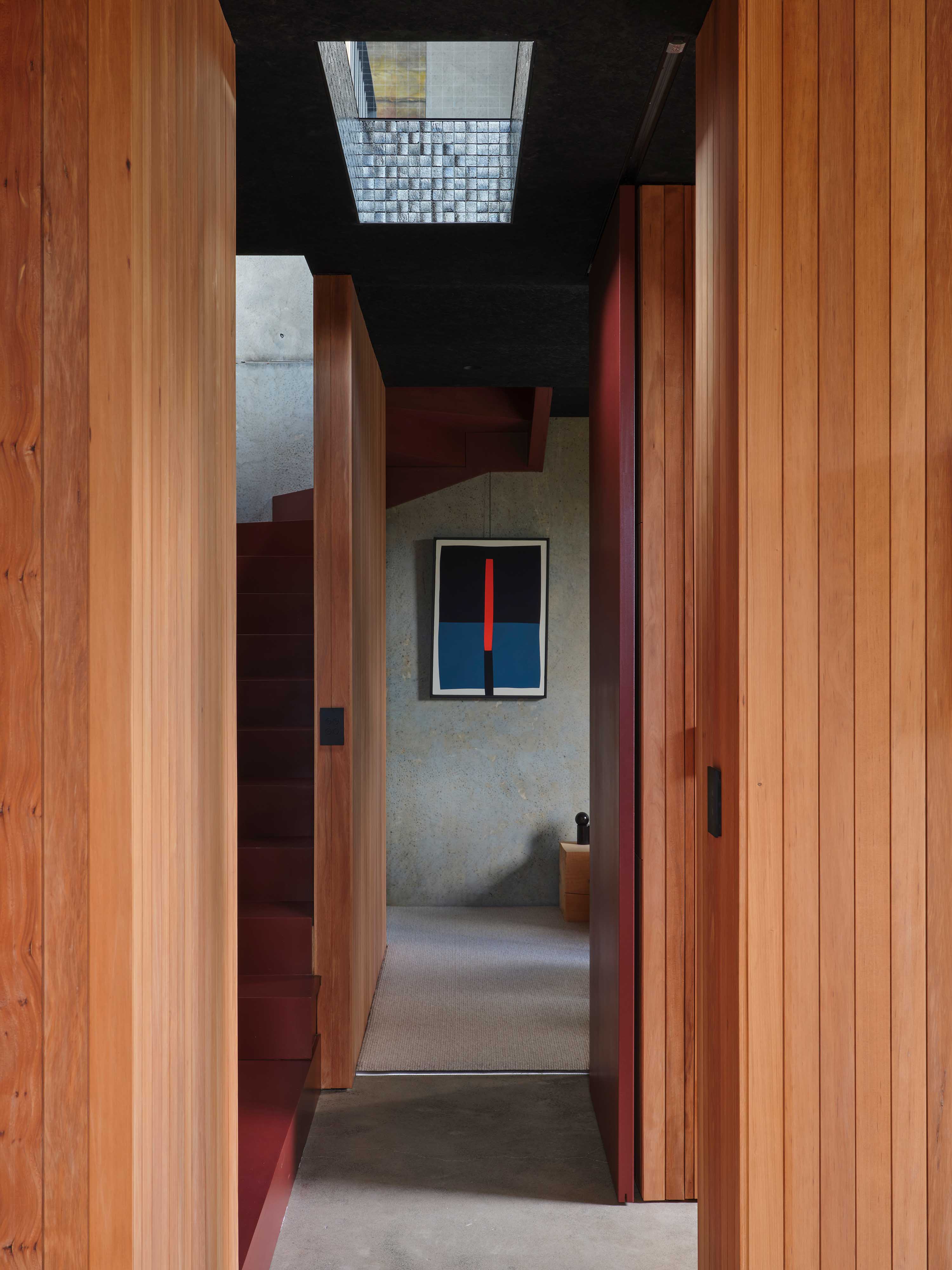 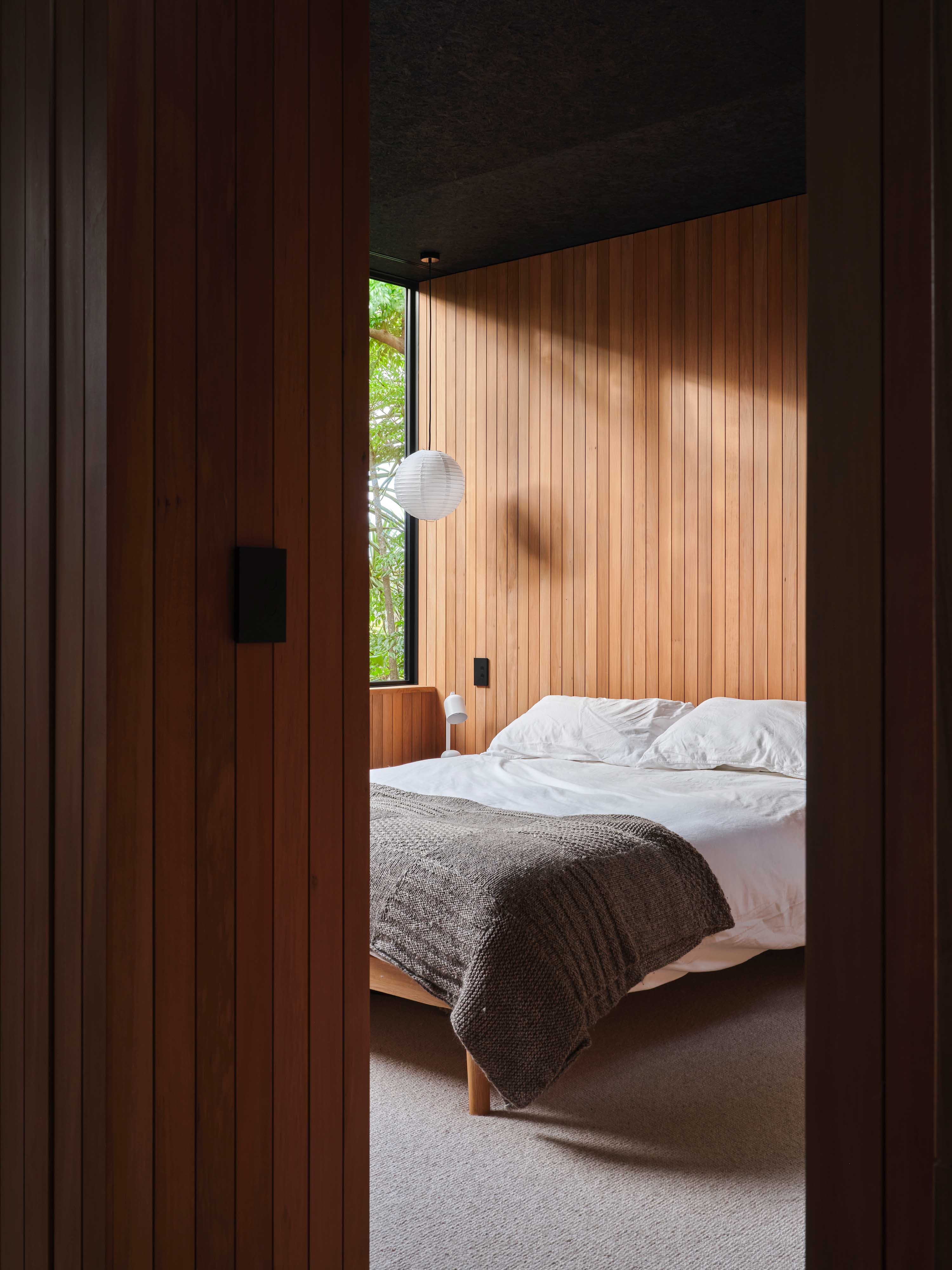 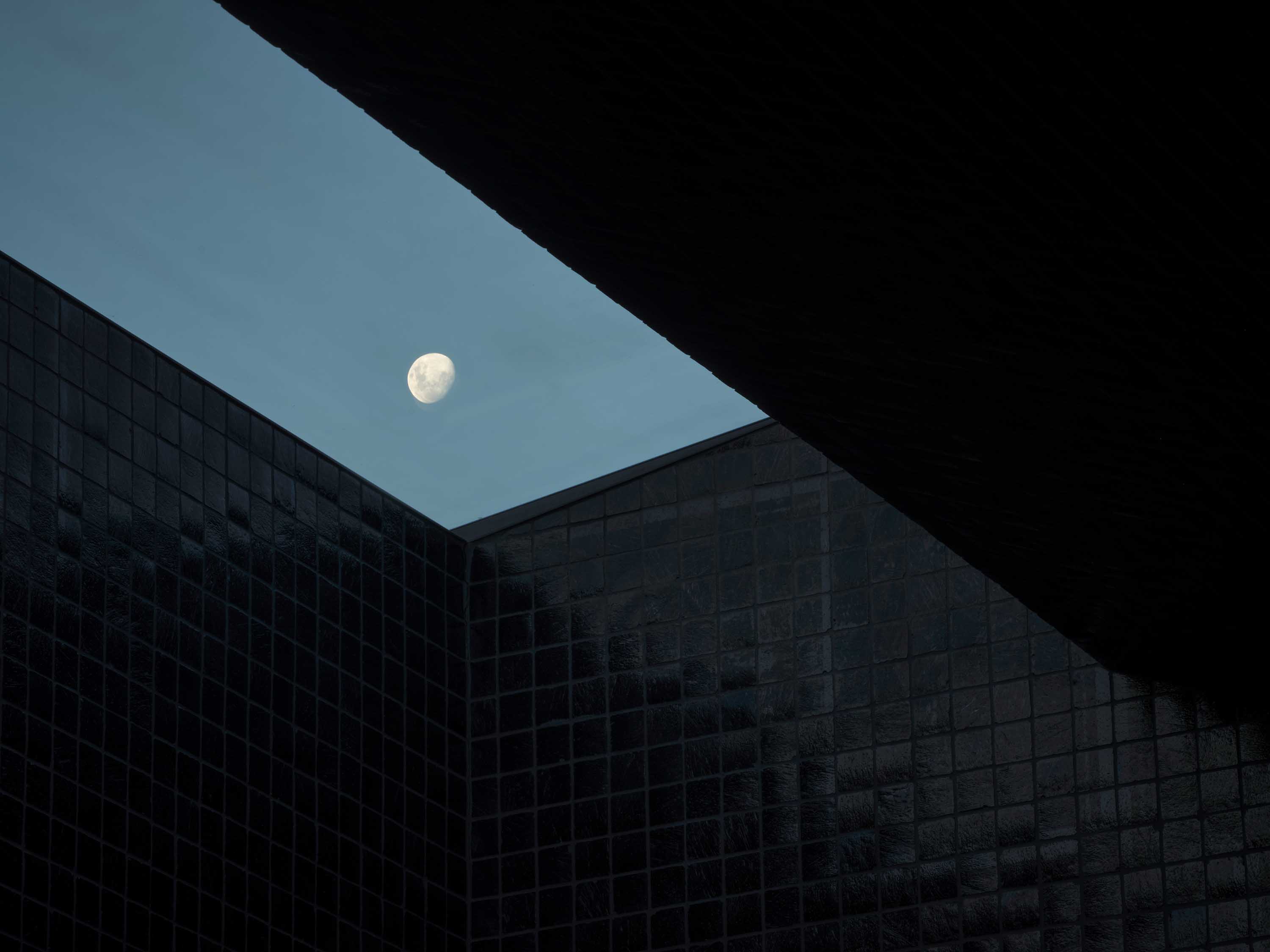 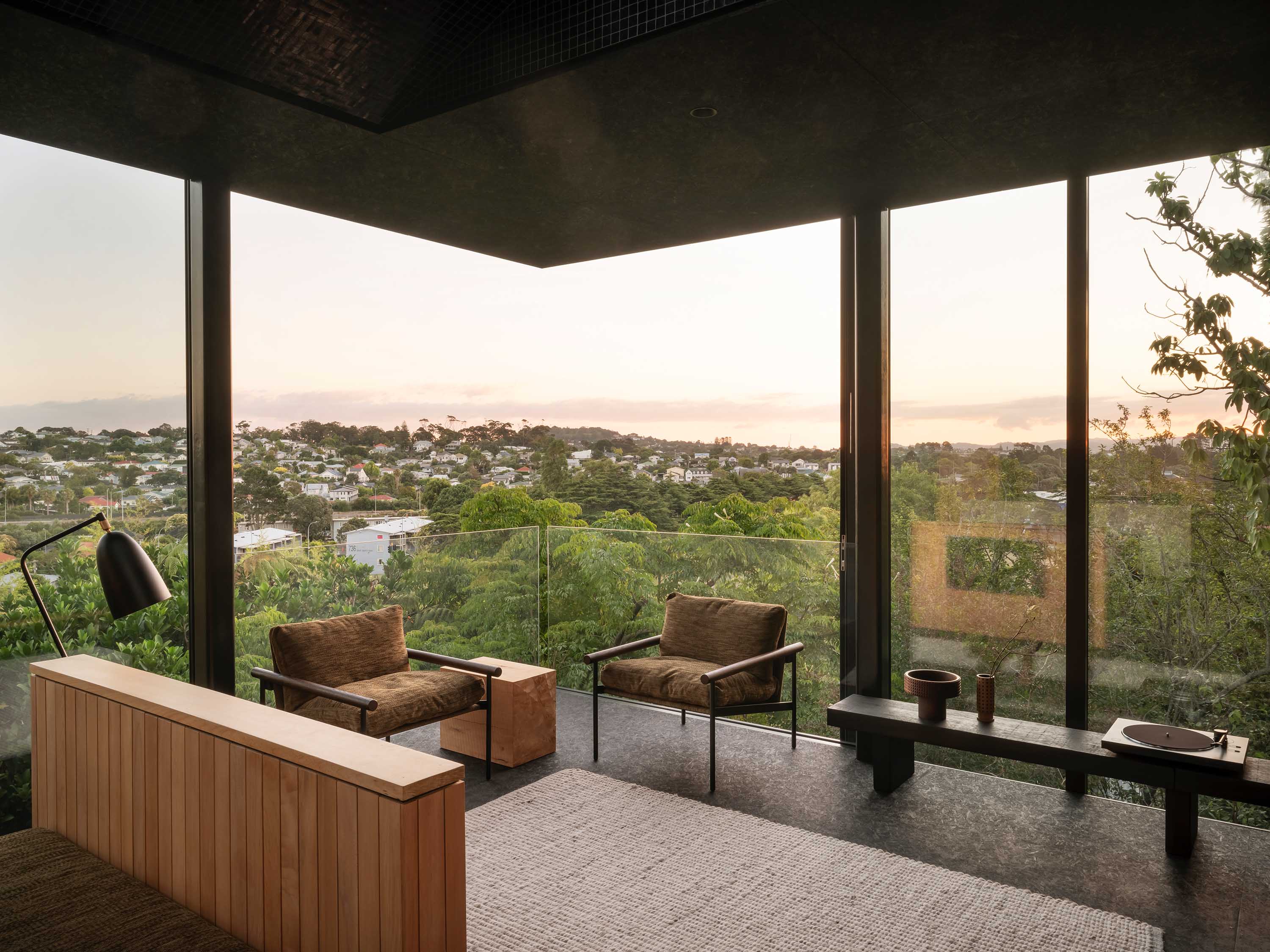 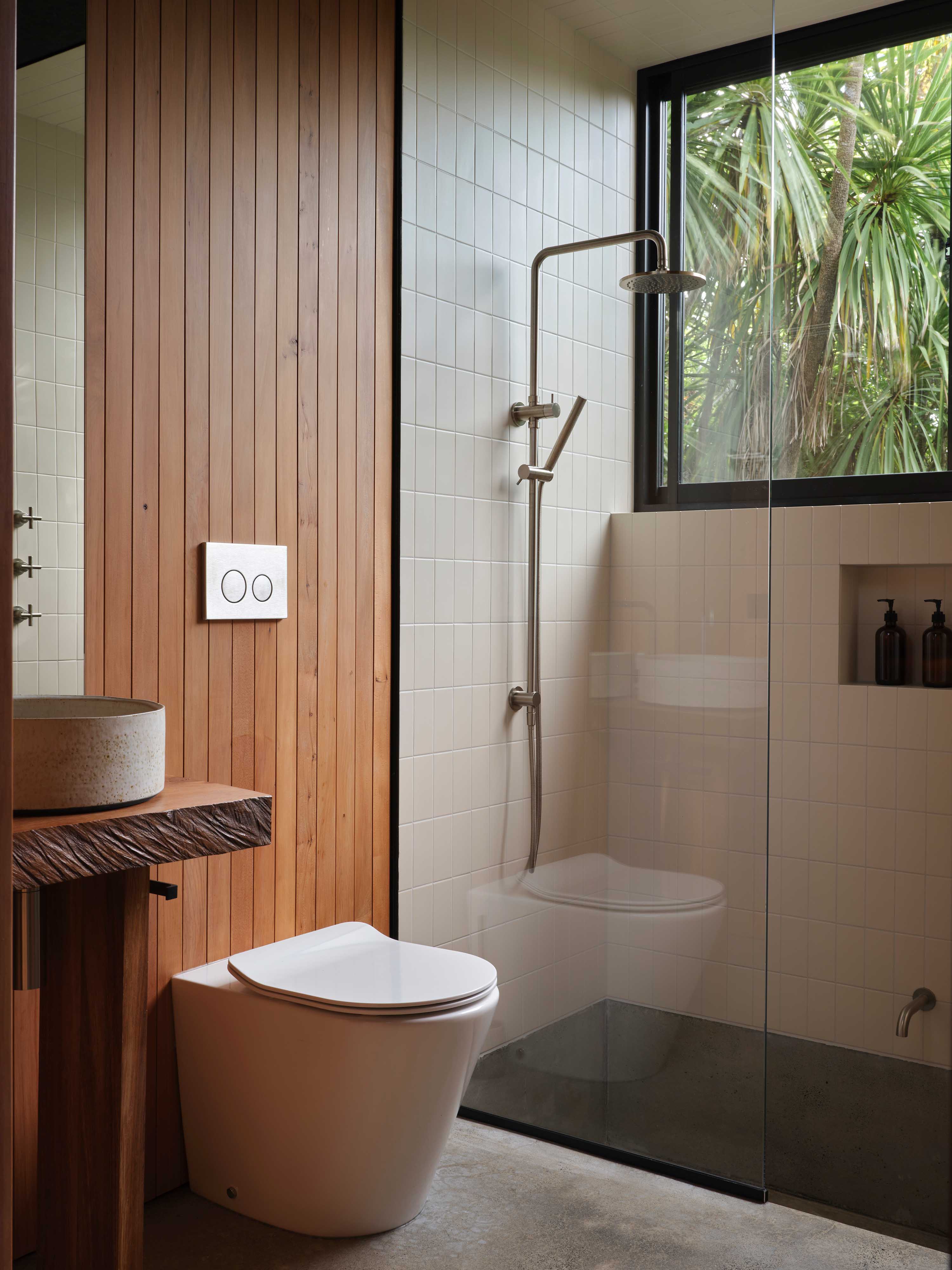 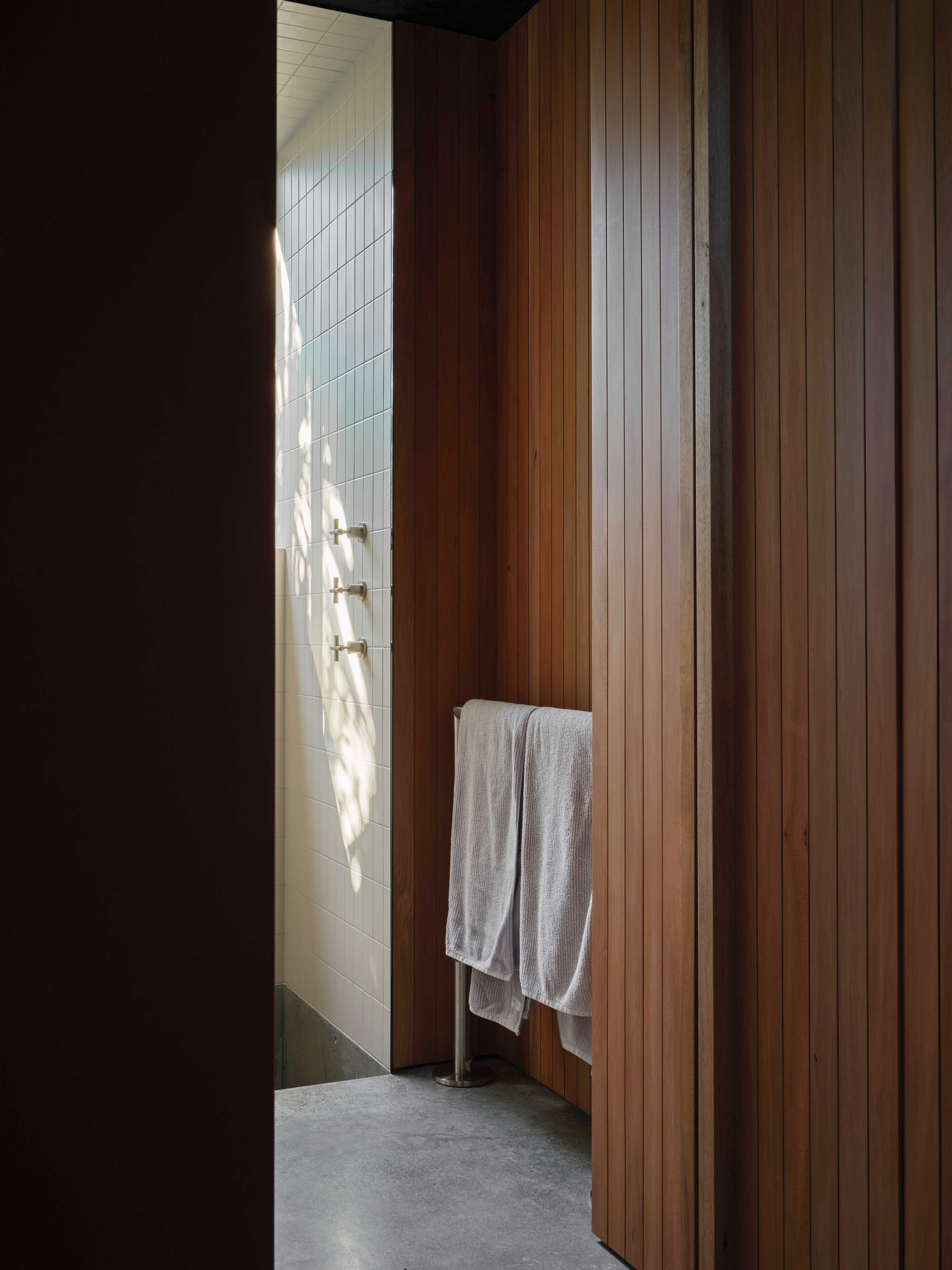 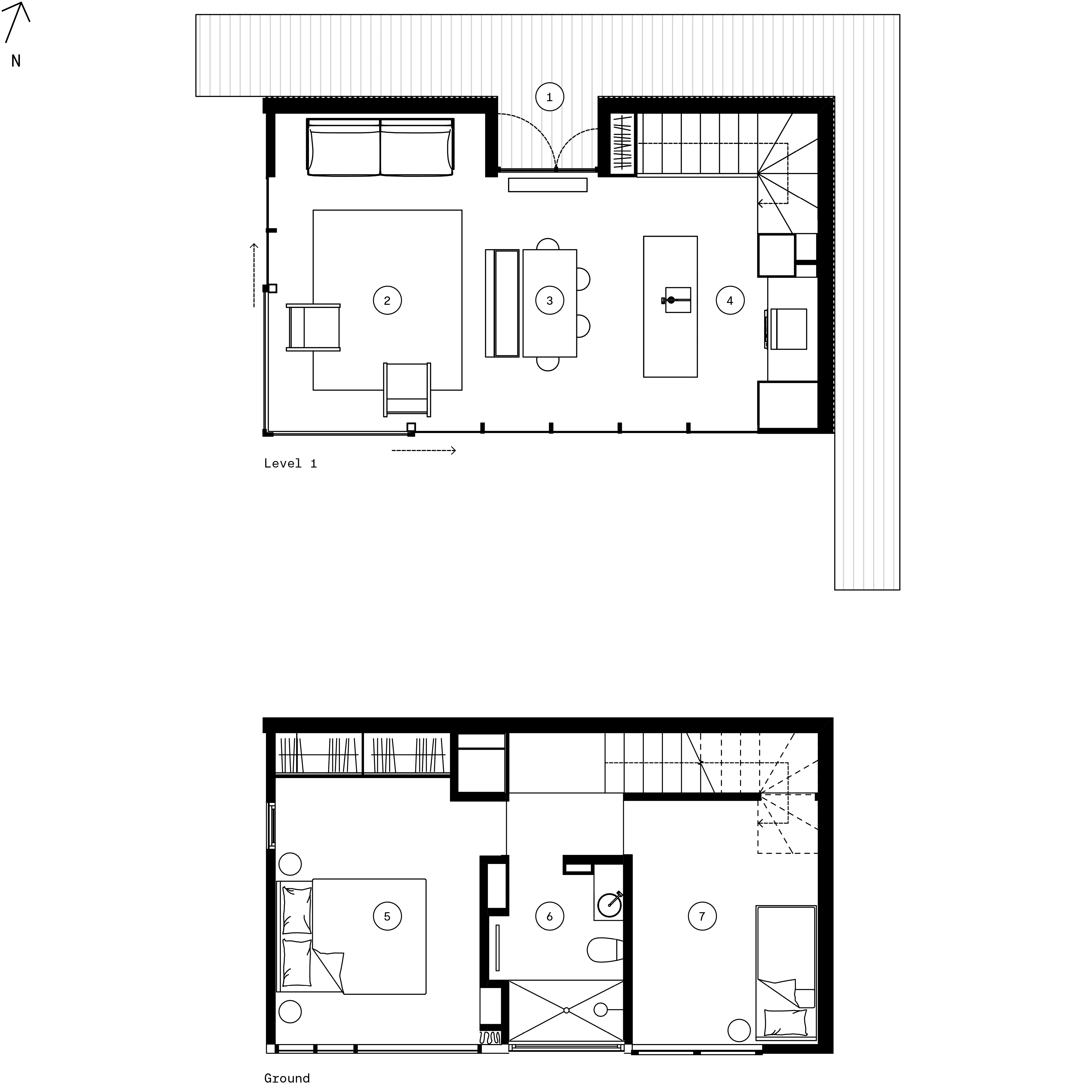 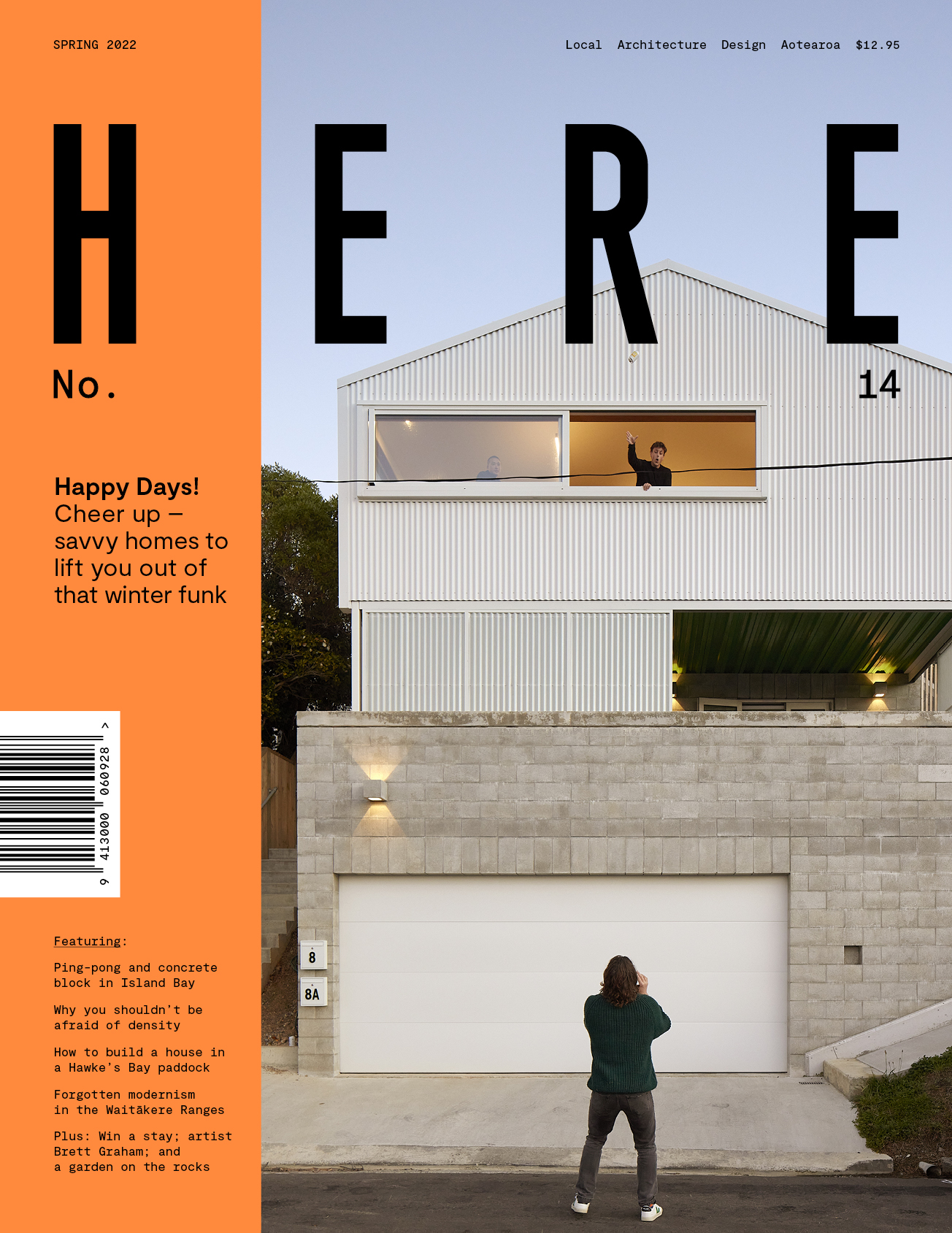