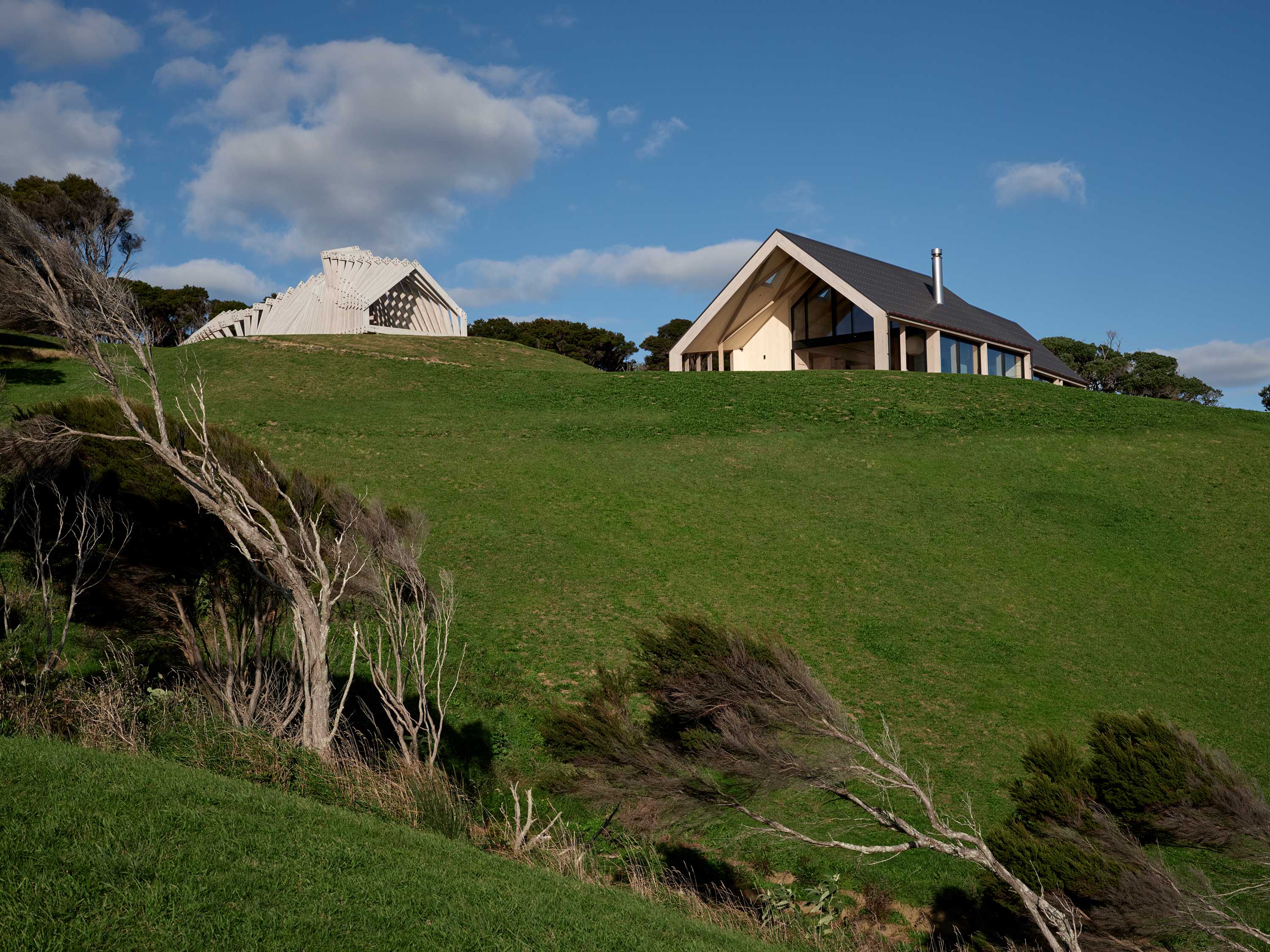 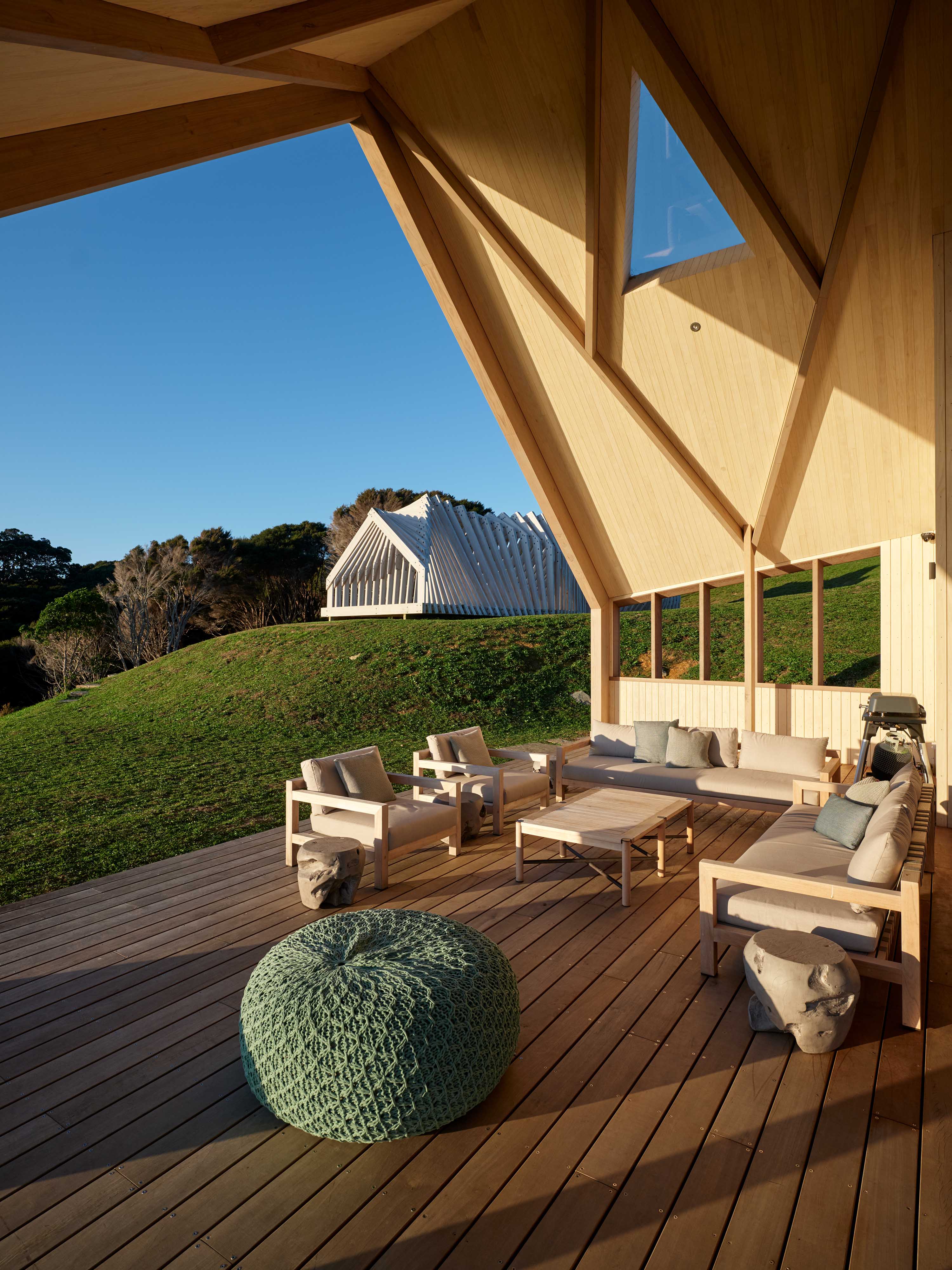 It’s a wonderful piece of land, running down to a rocky little beach on the western edge of Waiheke Island. There are old pōhutukawa, pūriri and kānuka in the gullies, and native birds in the trees. The extraordinary view sweeps over the inner Hauraki Gulf, across Papakohatu Crusoe Island and over Te Motu-a-Ihenga (Motuihe), Motutapu and Rangitoto, with the city far in the distance.

It’s unsettling – you don’t usually see the gulf from this angle. They are familiar elements, picked up and rearranged, and that throws you for a moment. You pause, name the motu, and orientate yourself.

It seems appropriate that the house Stevens and Lawson designed here has an element of reverence. It’s variously described as a wharenui, though sometimes it’s a barn. (Indeed next door, it has a chapel-like pavilion – but we’ll get to that in a moment.) From one angle it seems like a Scandinavian barn, with its eaves drawing in low and its pitch reaching high; from another it has the high gable and deep covered porch of the wharenui. From all angles, it is welcoming and warm. “It’s a sheltering roof,” says Stevens. “It has a generosity – externally it’s a very pleasant proportion, and internally it’s dramatic.”

It’s called Mawhiti, and designed not as a private residence or holiday home, but exclusively as a holiday rental: it’s closer to luxury lodge than home. It feels like a home, and could well be if you wanted it to be, but with its roots as a commercial enterprise, that has subtle but important design ramifications.

The story goes back to 2011, when Stevens Lawson designed a timber pavilion intended to represent New Zealand at the Venice Biennale. Built from glu-lam beams, it resembled a skeleton, the joins and bones on display, a celebration of new-world timber in an old-world stone city. Beautiful — but back in 2011, with the country recovering from the Global Financial Crisis, there was no funding and the project languished, unbuilt, as a design on their website.

Five years later, the economy restored, and the owners of Mawhiti got in touch with the architects, having seen the design online not long after they bought this magnificent piece of land. At the same time, so did the Sculpture on the Gulf Trust, which envisaged it as pavilion for the biennial arts trail. The pavilion was finally unveiled in 2017 at Matiatia, before being relocated up the road — before there was even a house.

“They’re companion pieces,” says Stevens of the pavilion and holiday house. The pavilion was pushed to the far side of the building platform, on a slight rise from the house, the land falling away from it so that when you look through, you see sky and sea stretched out in front.

Next door is the house, its deep porch offering shelter, and sharing a language of asymmetry and glu-lam beams. Though it’s a house, not a sculpture, the language evolves slightly, to rough-sawn cedar and triangular battens on the exterior, grooved pine and battens on the interior, accompanied by concrete, copper and slate. Throughout, you can read the structure of the place, its bones on display in a diamond grid. 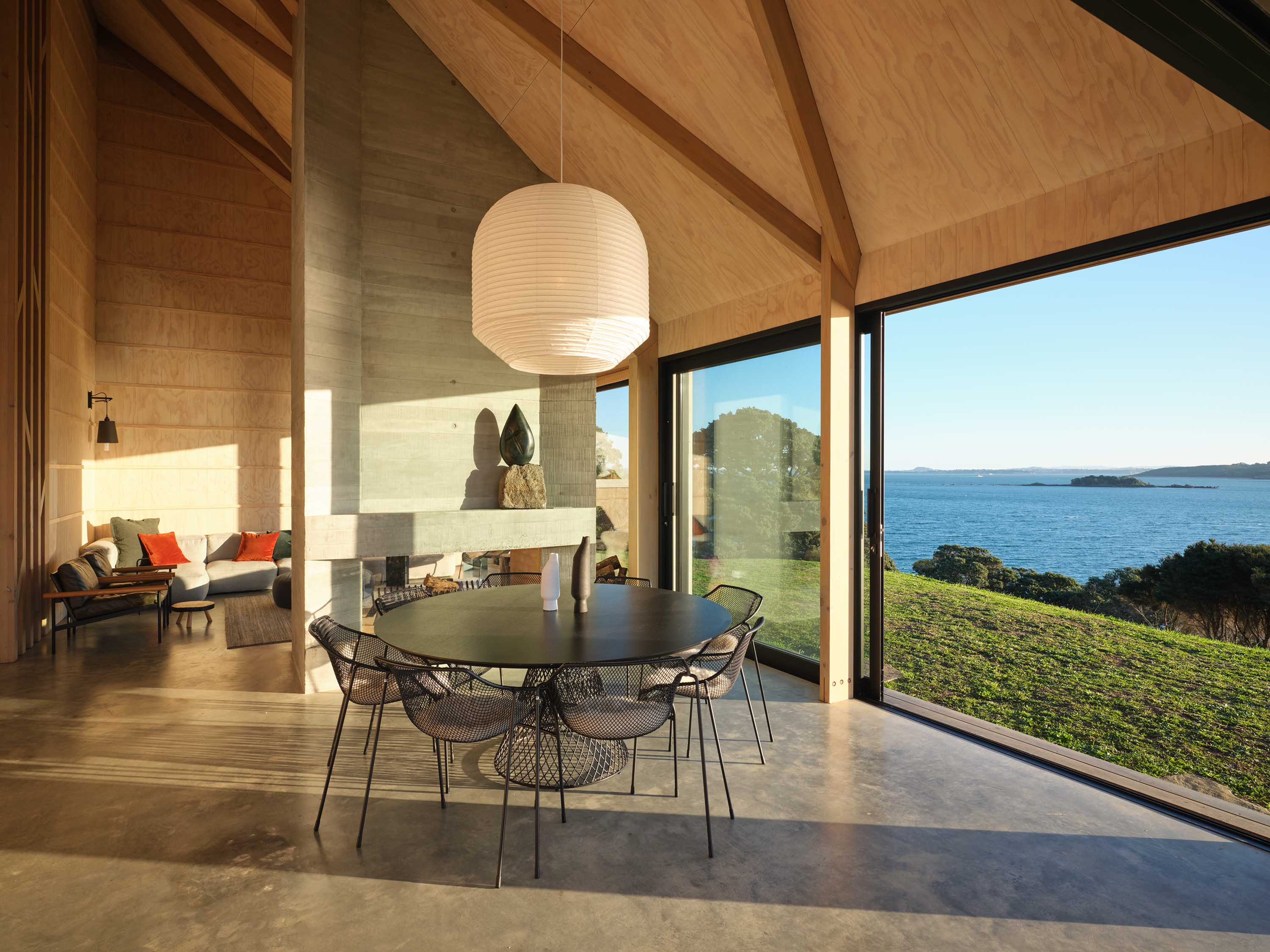 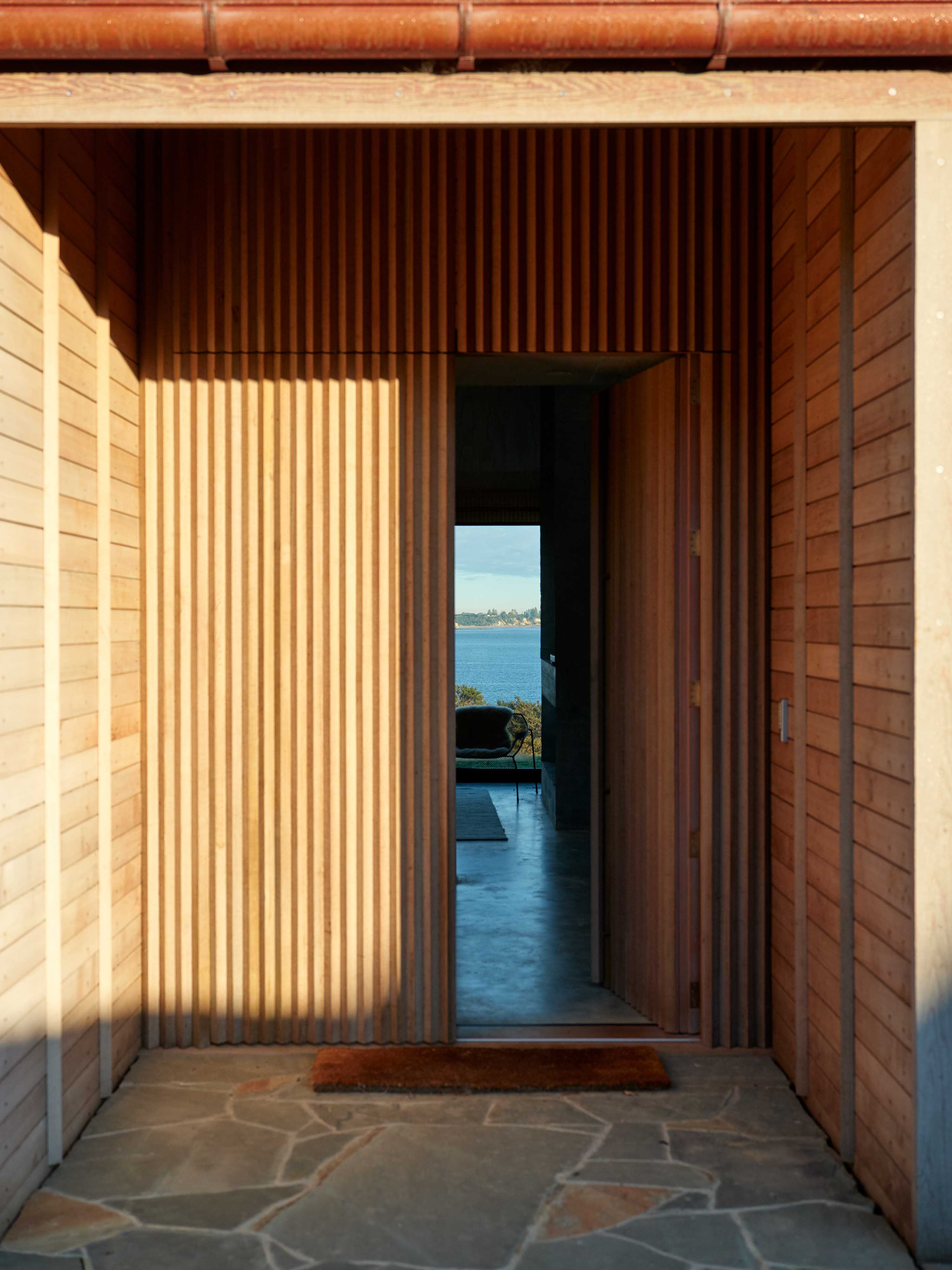 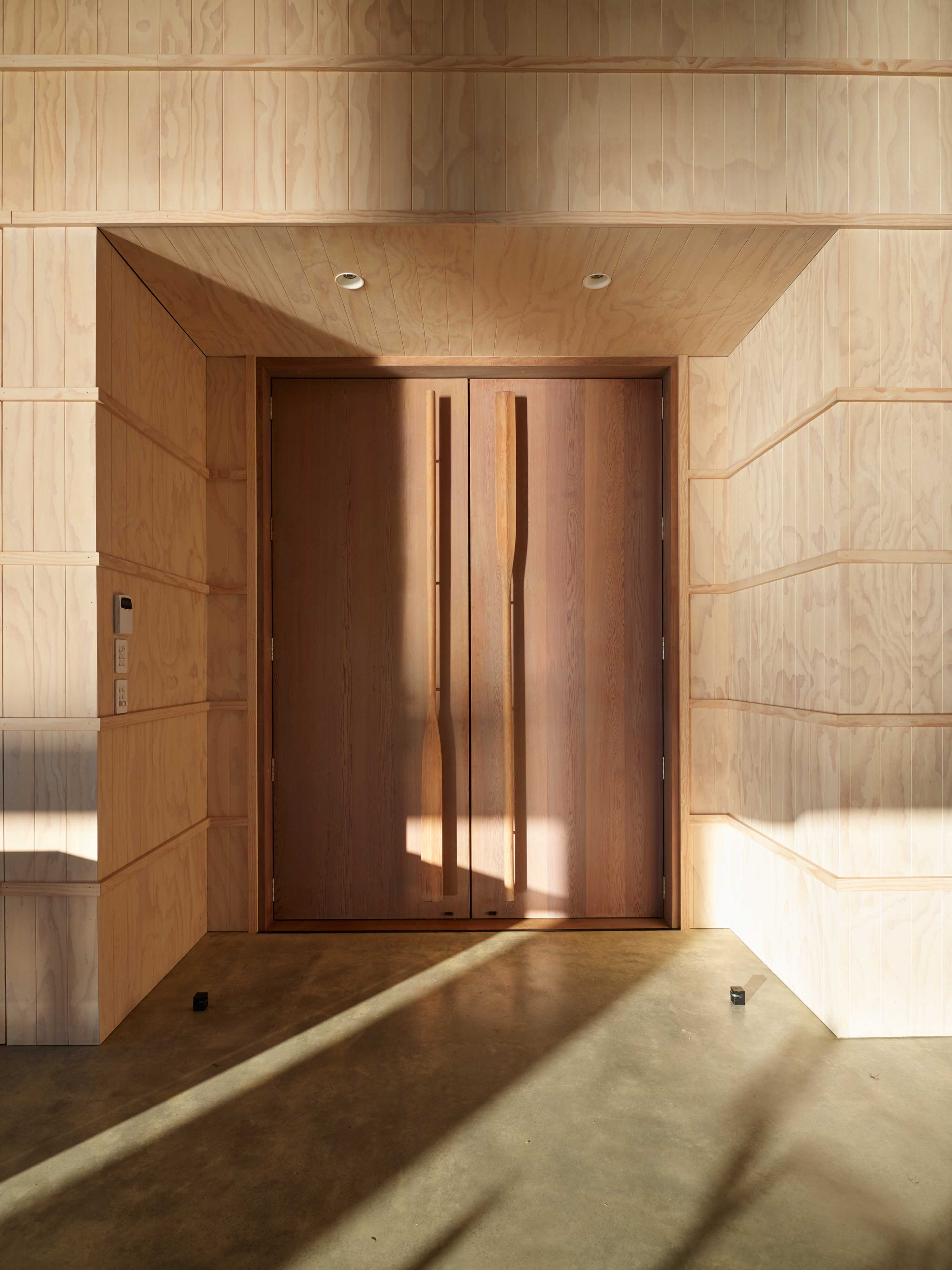 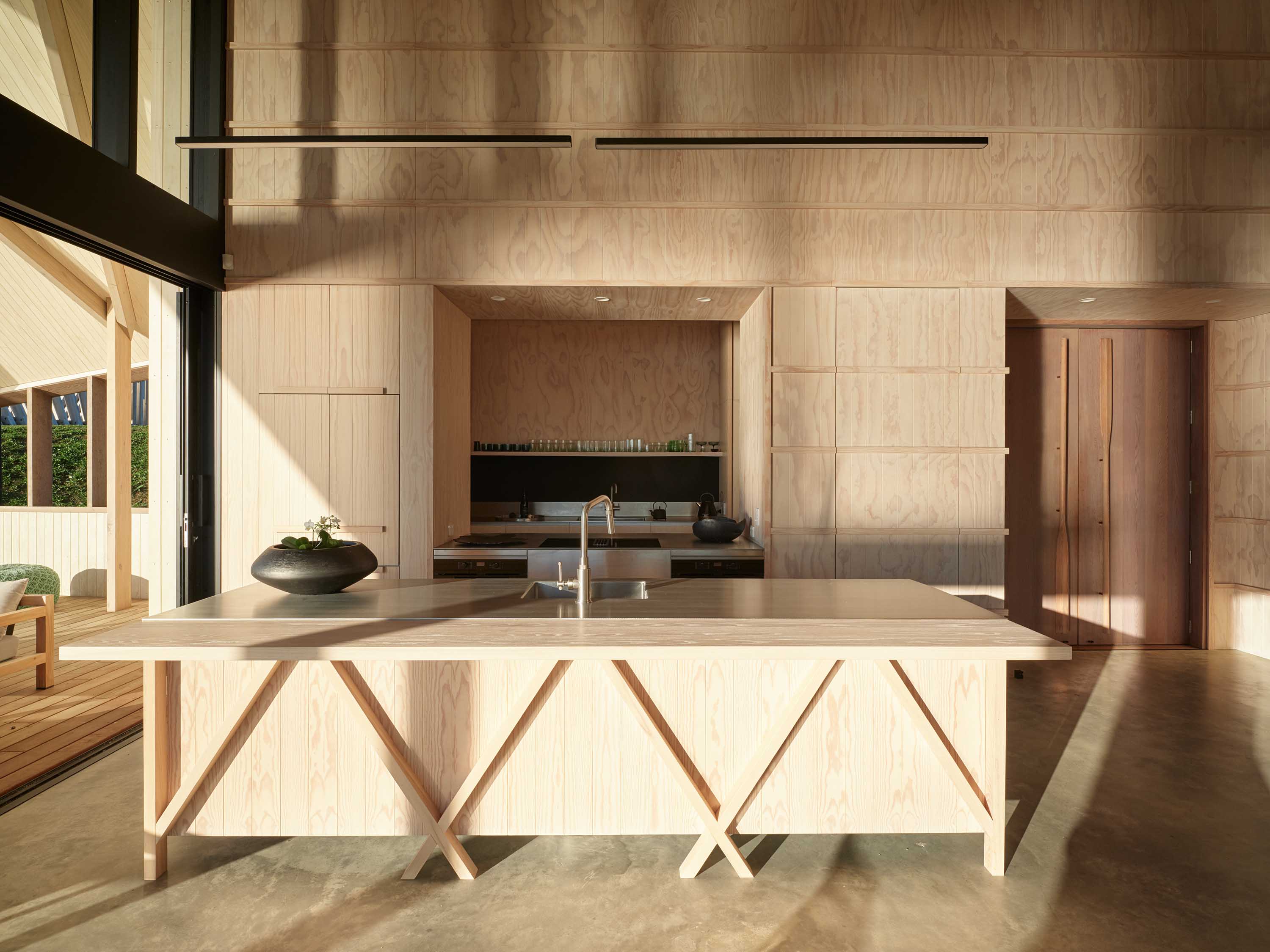 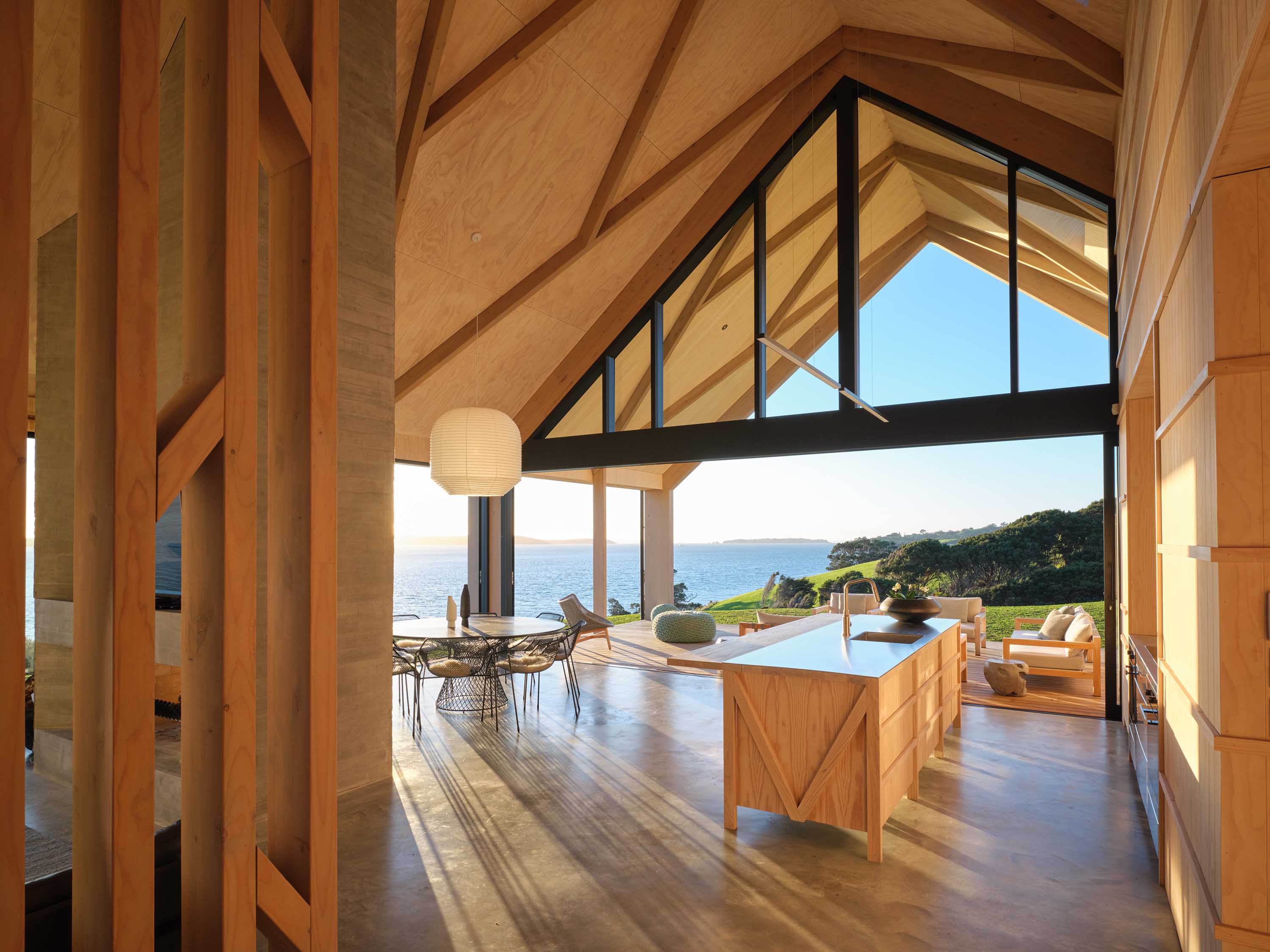 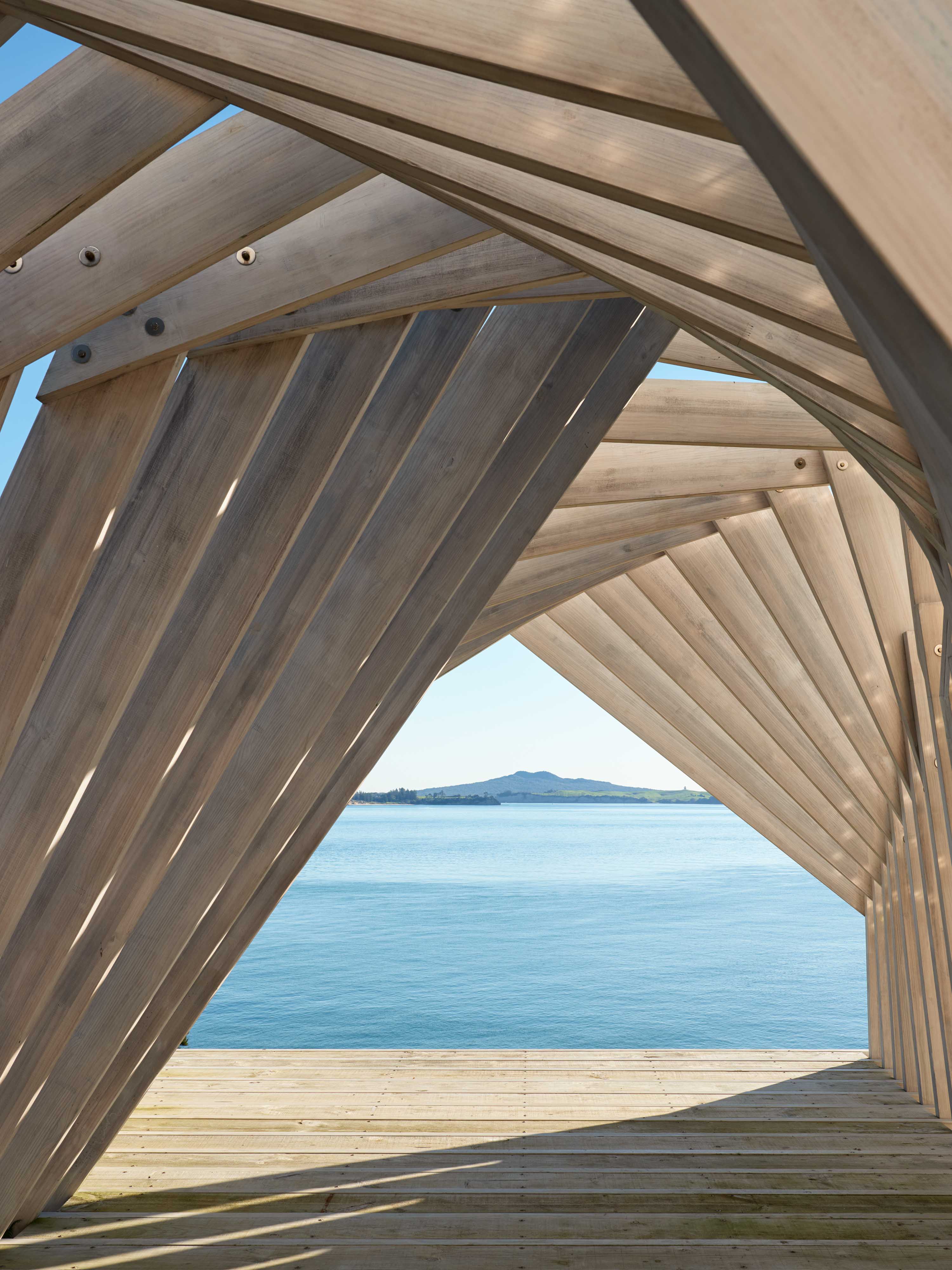 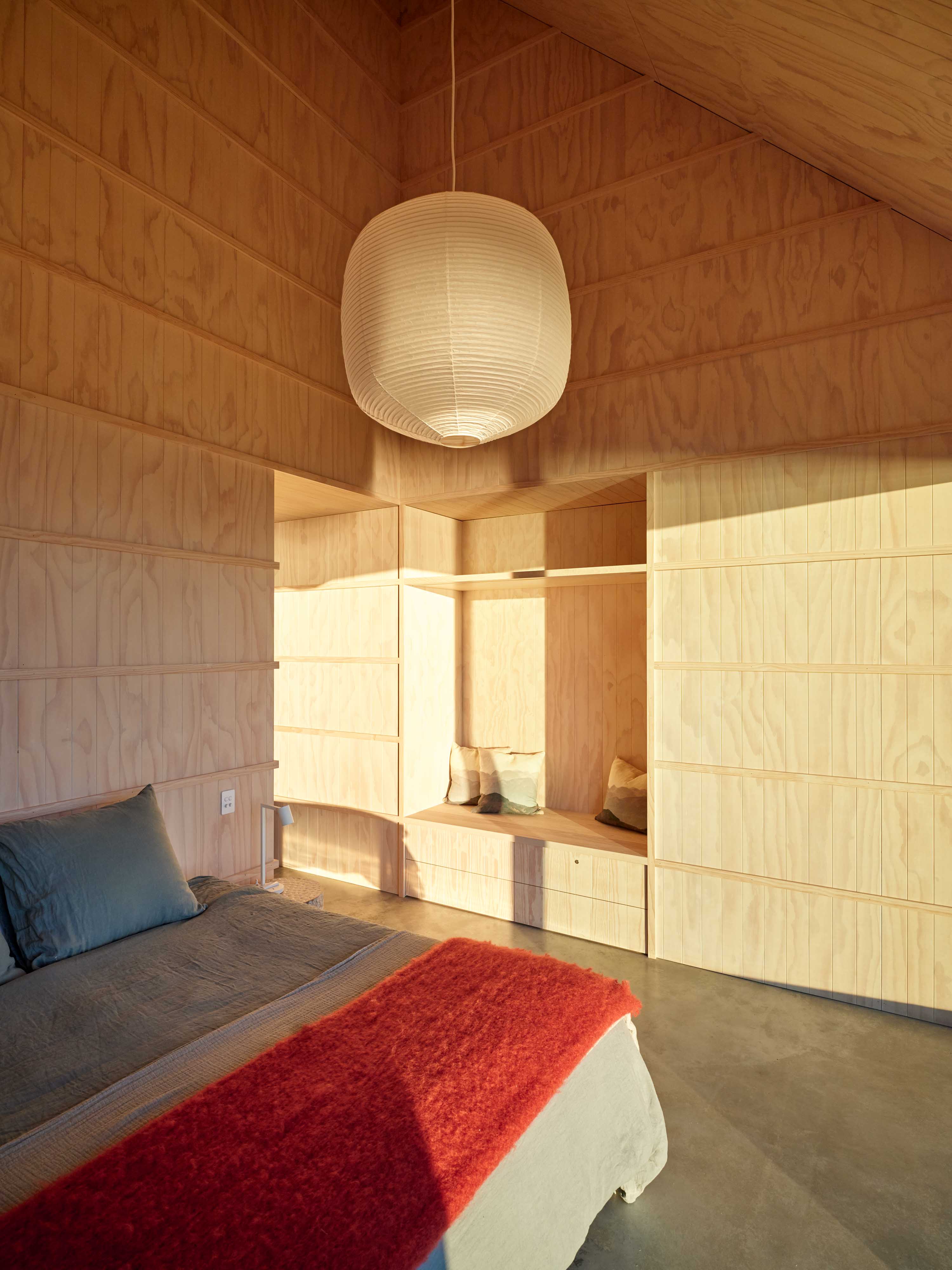 The house has a domesticity that many of its type lack. There are three segments, one for living and two for sleeping, each on a different level three steps down and offset from the last, with a low-roofed connector between them. Between each segment is a small planted courtyard. “It’s trying to get a certain randomness into it,” says Stevens. “Not as random as the sculpture, but it steps around the site.”

It’s also smaller than most buildings of its type, with their multiple living spaces and multiple places to sit inside those multiple living spaces, creating a sort of empty-hotel-lobby effect. There is one place to eat – a lovely round table beside doors that fully retract – and one place to sit inside, enclosed by a timber screen and the concrete fireplace. The open kitchen has the best view in the house.

Generosity comes from the height of the rooms, which rise to seven metres in the living space. The rooms are modest in plan but very tall, which lends a particular sort of feeling. There are three metres of wall, with four metres of roof above. “They have a texture, and a warmth,” says Stevens. “It’s larger than life – but it makes you feel larger than life.”

The design is not overtly luxurious – more a beautiful piece of craft. There are rice-paper lanterns throughout, and carefully selected pieces of art and furniture that feel personal and pleasantly domestic. Pou by Waiheke artist Anton Forde are placed in the courtyards and a honed pounamu piece in the lounge area. The floor is burnished concrete and the walls are oiled pine with a slightly white-washed effect.

From the main living area, you walk through a pine door, and down a meandering internal pathway that joins the four bedrooms. “This is actually our favourite part of the house,” says one of the owners, “because it was so unexpected and sculptural.” In the mornings, sun streams in through the high windows, warming the concrete floor.

All the bedrooms are the same size, so that there’s no tussle when you arrive and try to work out who gets the best and biggest room. Every bedroom has an identical en suite, opening directly onto a private courtyard: you can shower in the open air, if you so choose.

As you move around the house, the views fall and shift. Sometimes it opens up, sometimes you’re looking through old pōhutukawa. You might go for a swim at the little beach, and dash back to the Japanese outdoor bath to watch the sun go down behind Rangitoto. Then, as night falls and the outdoors fall into intense darkness, the lights come on inside, that great sheltering roof above you, the fire on. “You feel really held in a space like this,” says Stevens. “When it becomes night and everything blacks out, the room feels magical.” 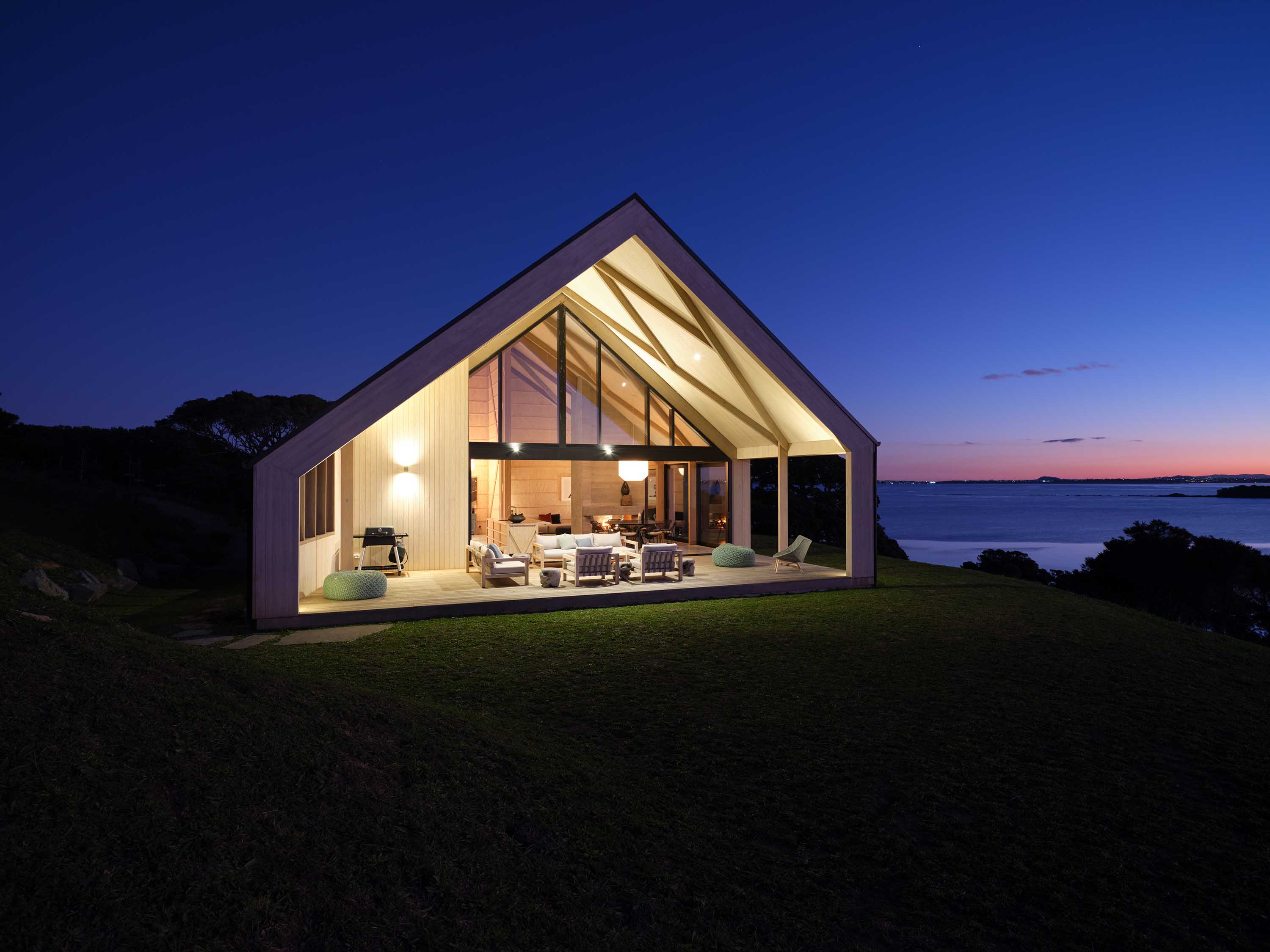 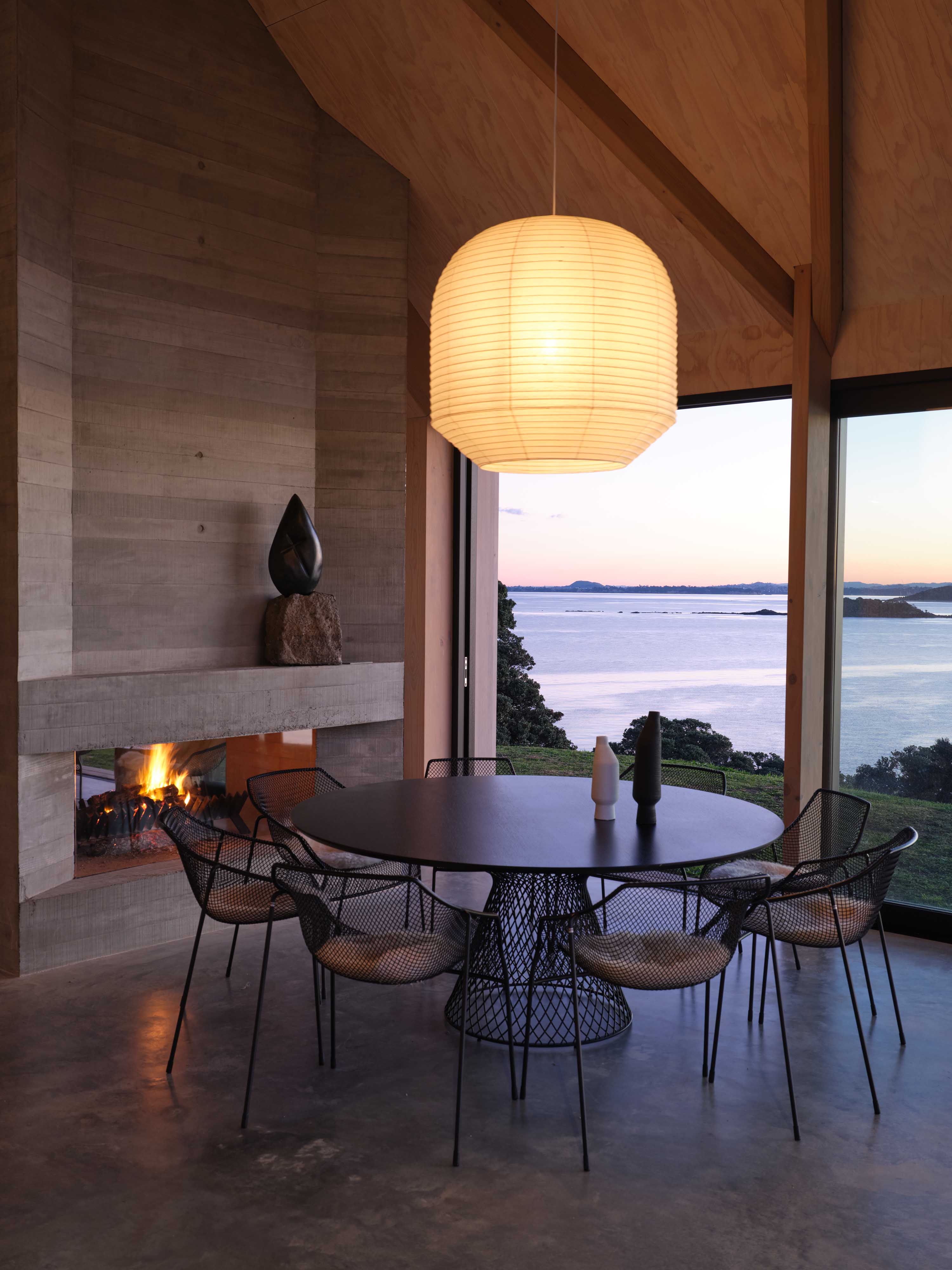 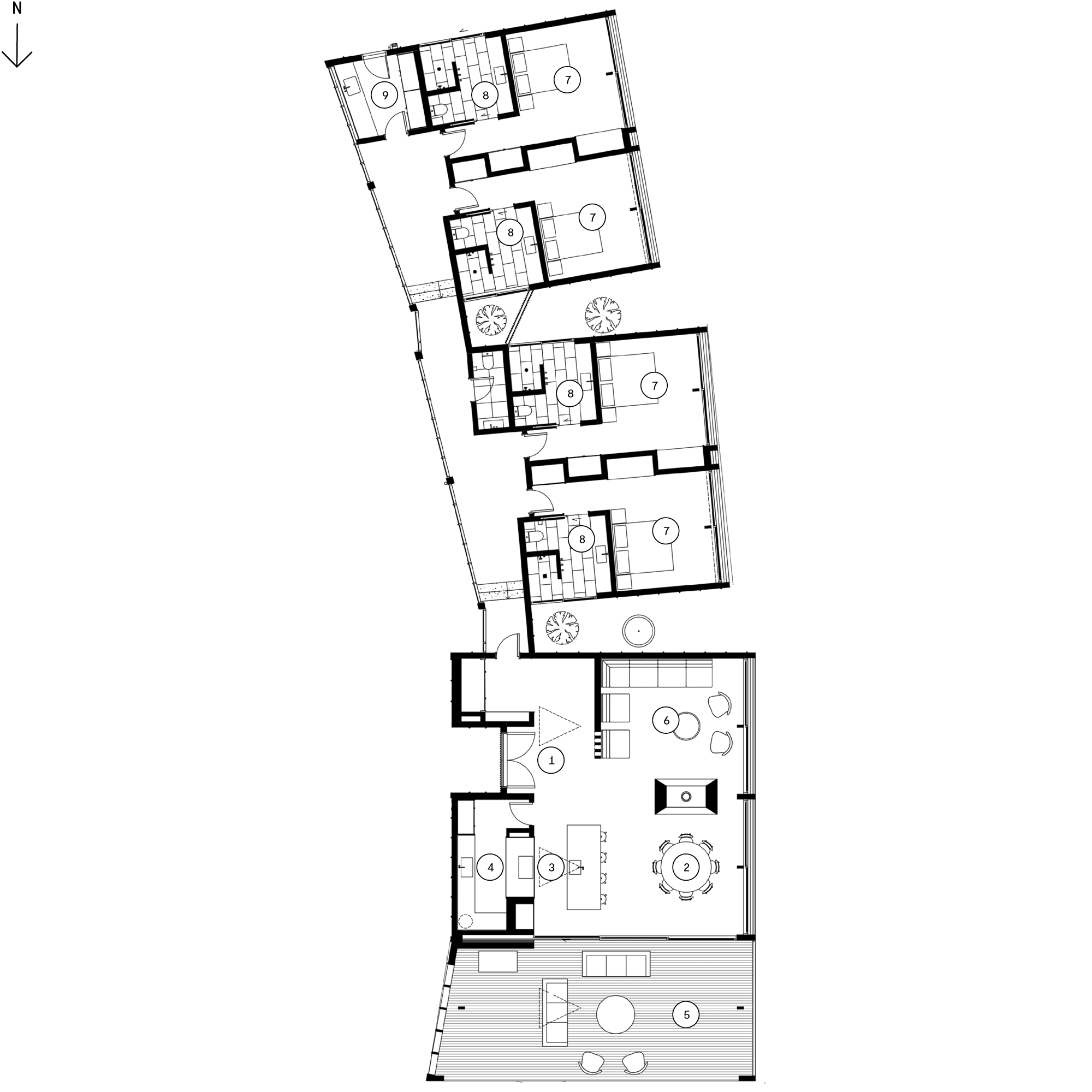