Fifteen years after stumbling across it, Kate and Matt Arnold restore a forgotten modernist gem in Ōtautahi Christchurch. 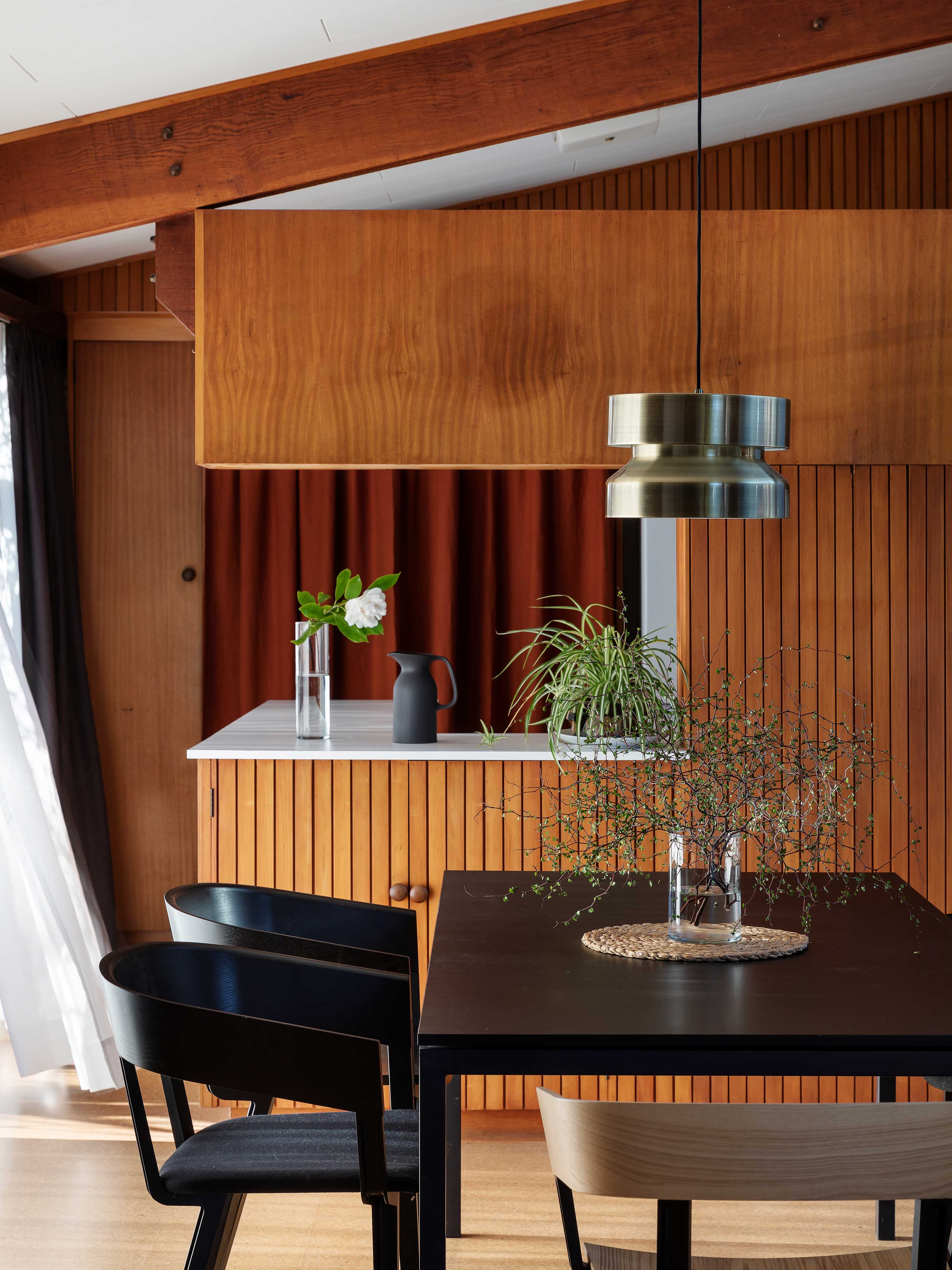 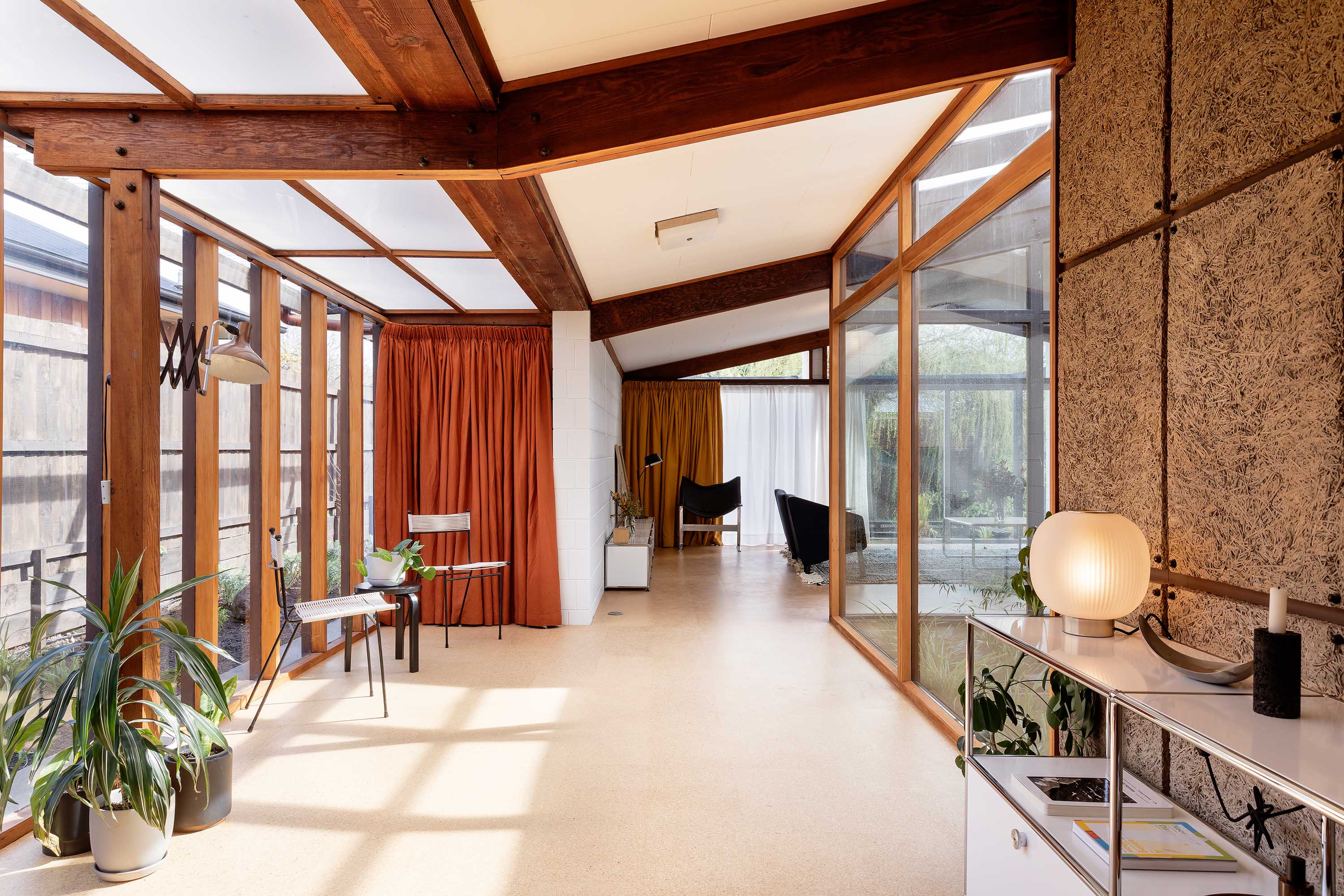 It started with a list and a good dose of serendipity and it took a lot of patience, as all the best house-hunt stories do. In 2006, Matt and Kate Arnold left Melbourne for Ōtautahi Christchurch, Kate’s home town, and began searching for a house to buy.

“We went to a couple of open homes – and they weren’t good,” says Kate. Disillusioned, Matt began looking at mid-century houses, despite knowing little about them at the time. Something about the style clicked with the designer and founder of Sons & Co. An obsession evolved, and he has since become one of the city’s most enthusiastic proponents of the Christchurch School – a collection of buildings from 1955 to 1975 that marry Japanese and Scandinavian modernism, timber and painted block, into a unique regional style.

After a couple of years exploring the city, the couple made a list of houses they liked and would consider living in. They narrowed it down to about five, including one in Cashmere designed by John G Phillips in 1968, which they first spotted while visiting the house next door.

Although Phillips worked for noted architect Guy Sellars, this house has no connection to Sellars’ practice. Little is known about Phillips, and even less so his client Ian Stringer, who was described on the electoral roll as a ‘journeyman’. No one knows how Phillips came to design the house, which Stringer sold after three years of ownership to a Polish emigré lawyer named Zbigniew Maciaszek.

At the time, the city was beginning to appreciate its architectural heritage, and many houses of the Christchurch School were still occupied by their original owners, now well into their advancing years. In their search for a home, Kate says they “got to know a lot of old ladies and they all said they weren’t going anywhere”.

On appropriately nice paper stock, the Arnolds wrote letters to the owners of the neighbouring Cashmere homes. “Mr Maciaszek” responded a week or two later to say he liked the quality of the writing paper, and that they were welcome to visit and take a look.

The house is designed around a central internal courtyard, with two bedrooms at the front, entry to the side, a generous living area and a compact kitchen; each space backs onto a side of the courtyard. There are few corridors – you move from one space to another, a clever trick that makes a small house feel airy and open.

It has post-and-beam construction and utilitarian, almost commercial, details including insulation panels on the ceiling similar to those found at the University of Canterbury, and electrical sockets set into the floor. “It doesn’t have the finesse that, say, a Warren & Mahoney house would have,” says Matt, “but the plan is just so clear.”

Maciaszek had lived in the house for close to 50 years with his wife, and they raised their son there. The walls were lined with shelves, books and objects, and the courtyard was so overgrown almost no light penetrated the interior. Maciaszek was a heavy smoker and had a tendency to keep the curtains drawn. The house felt closed in, but the bones were there, and it was almost completely original. 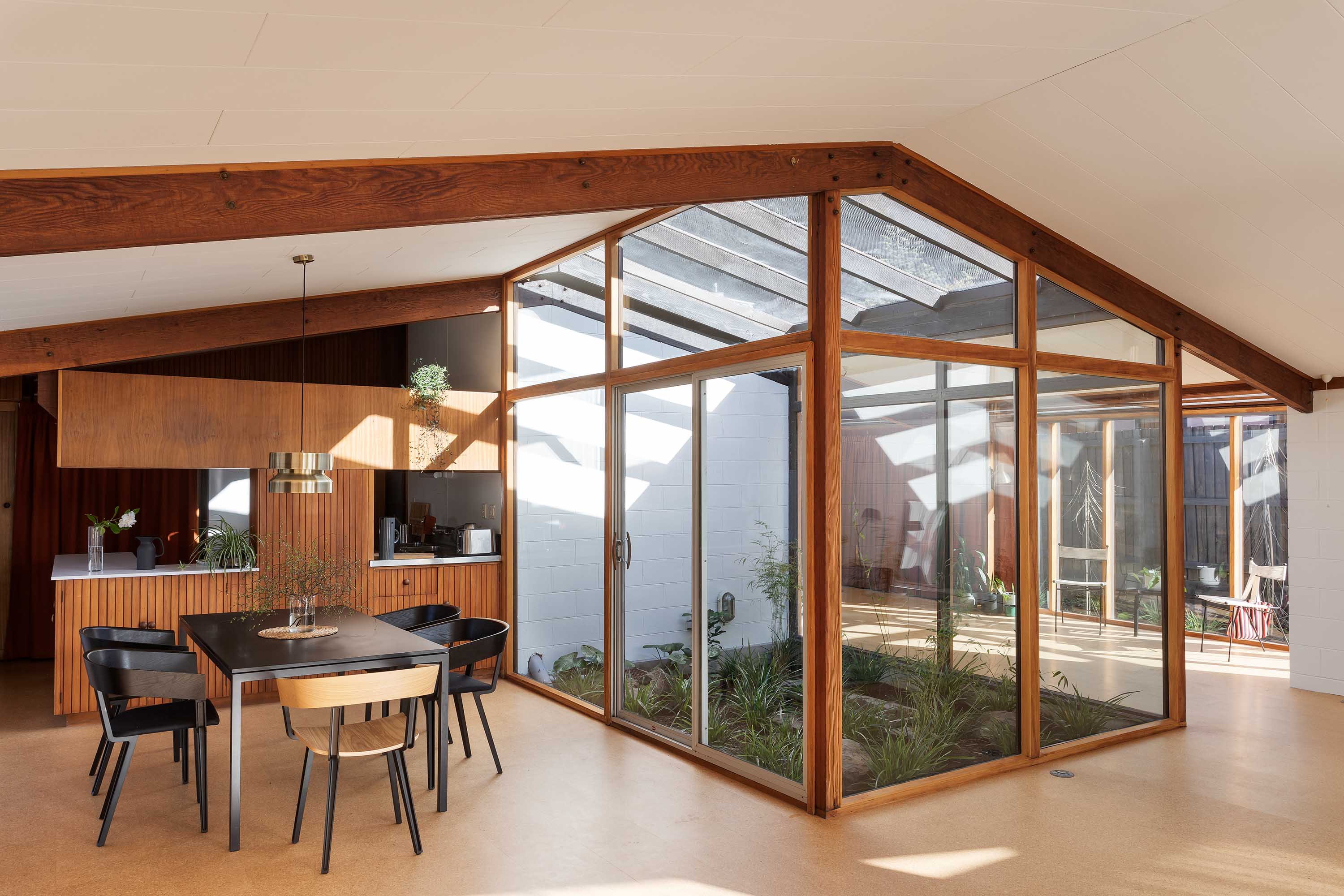 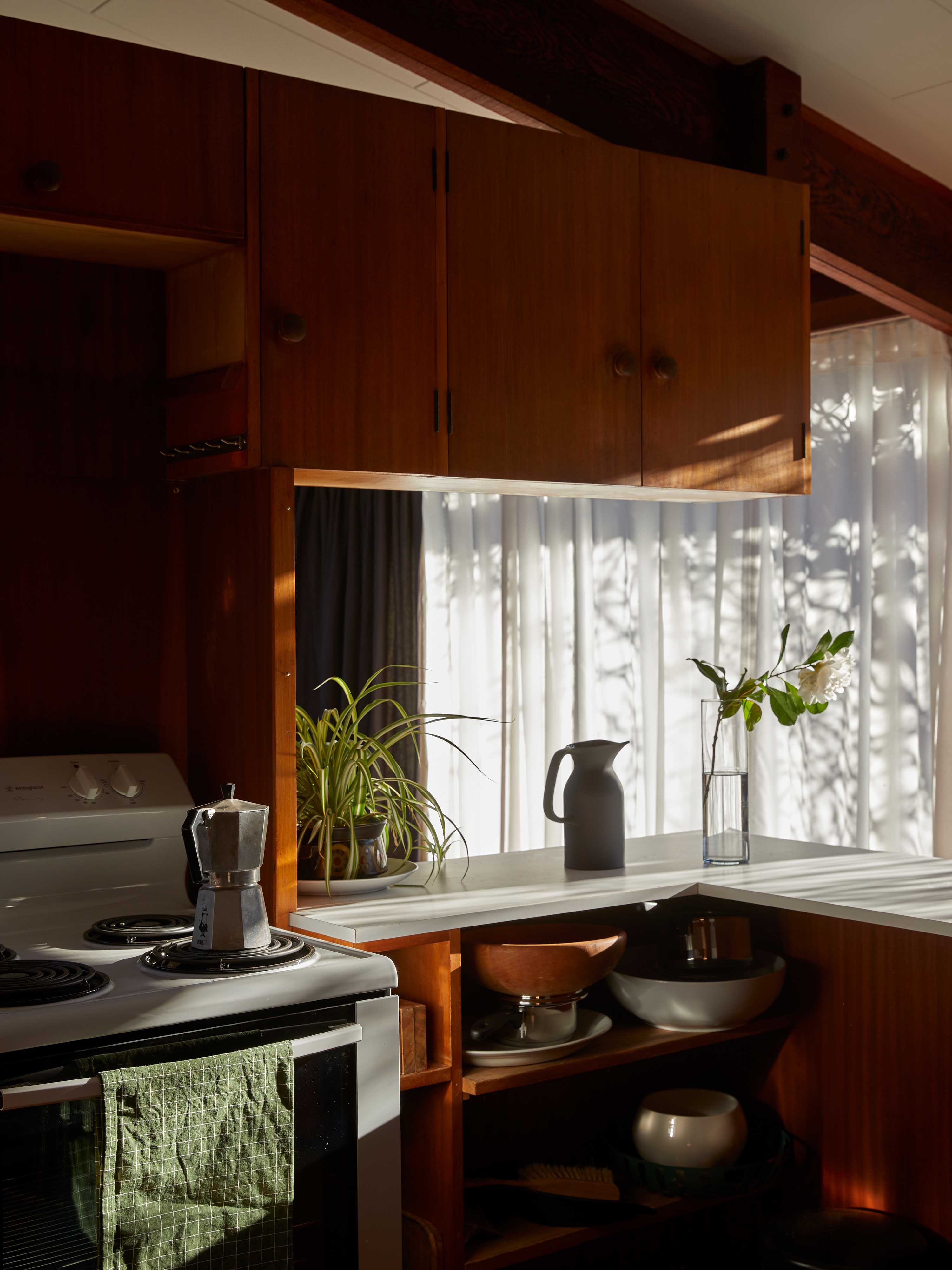 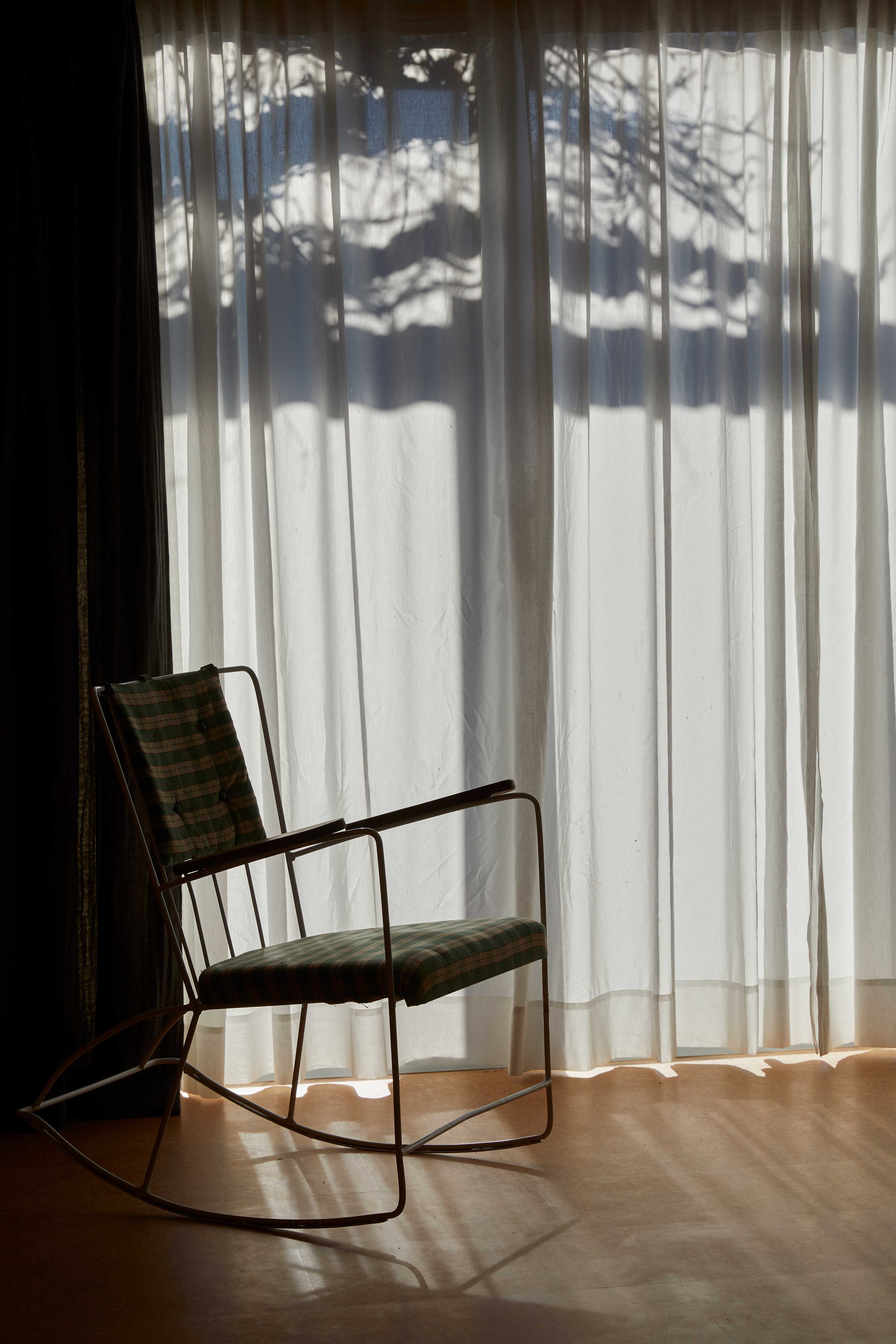 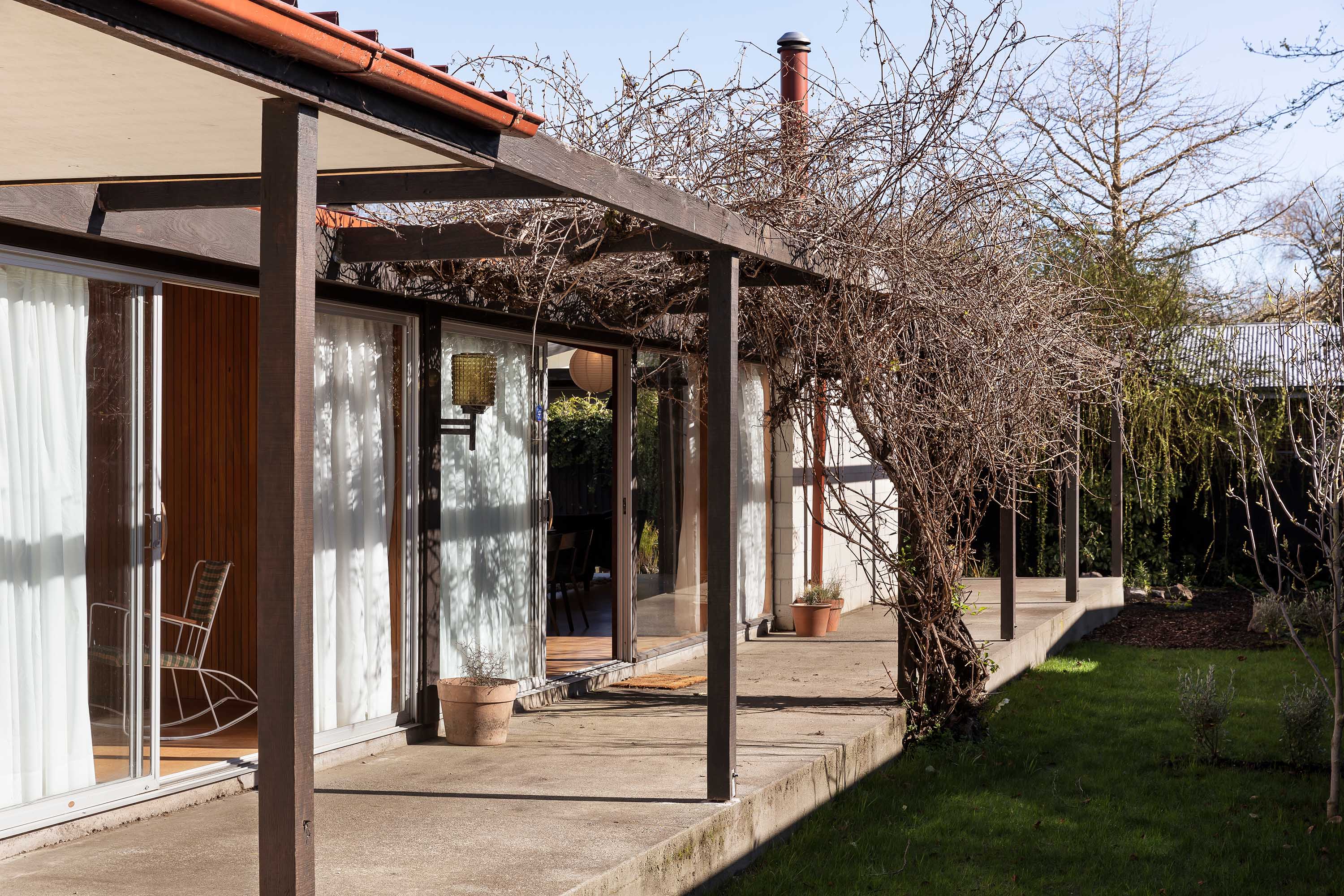 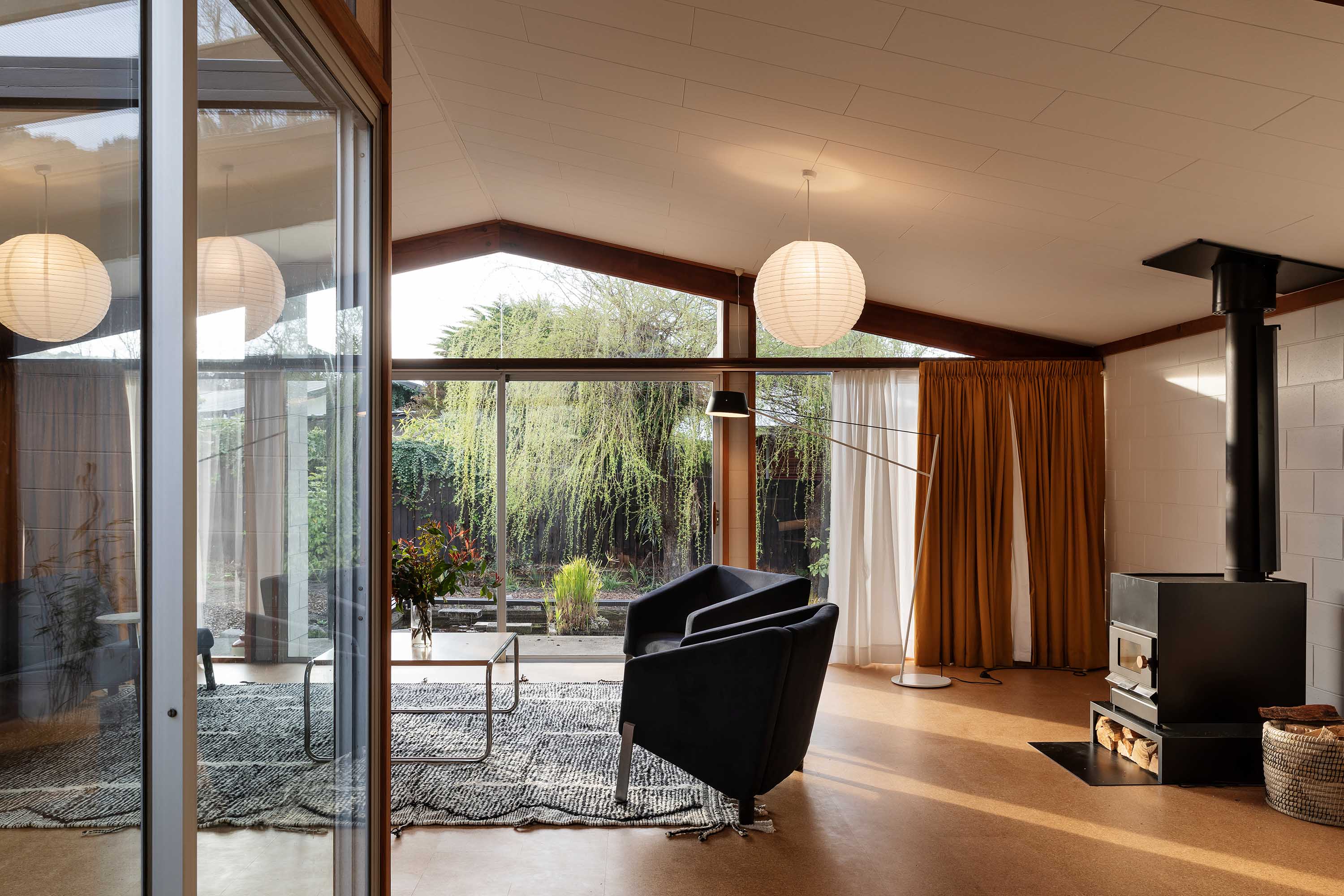 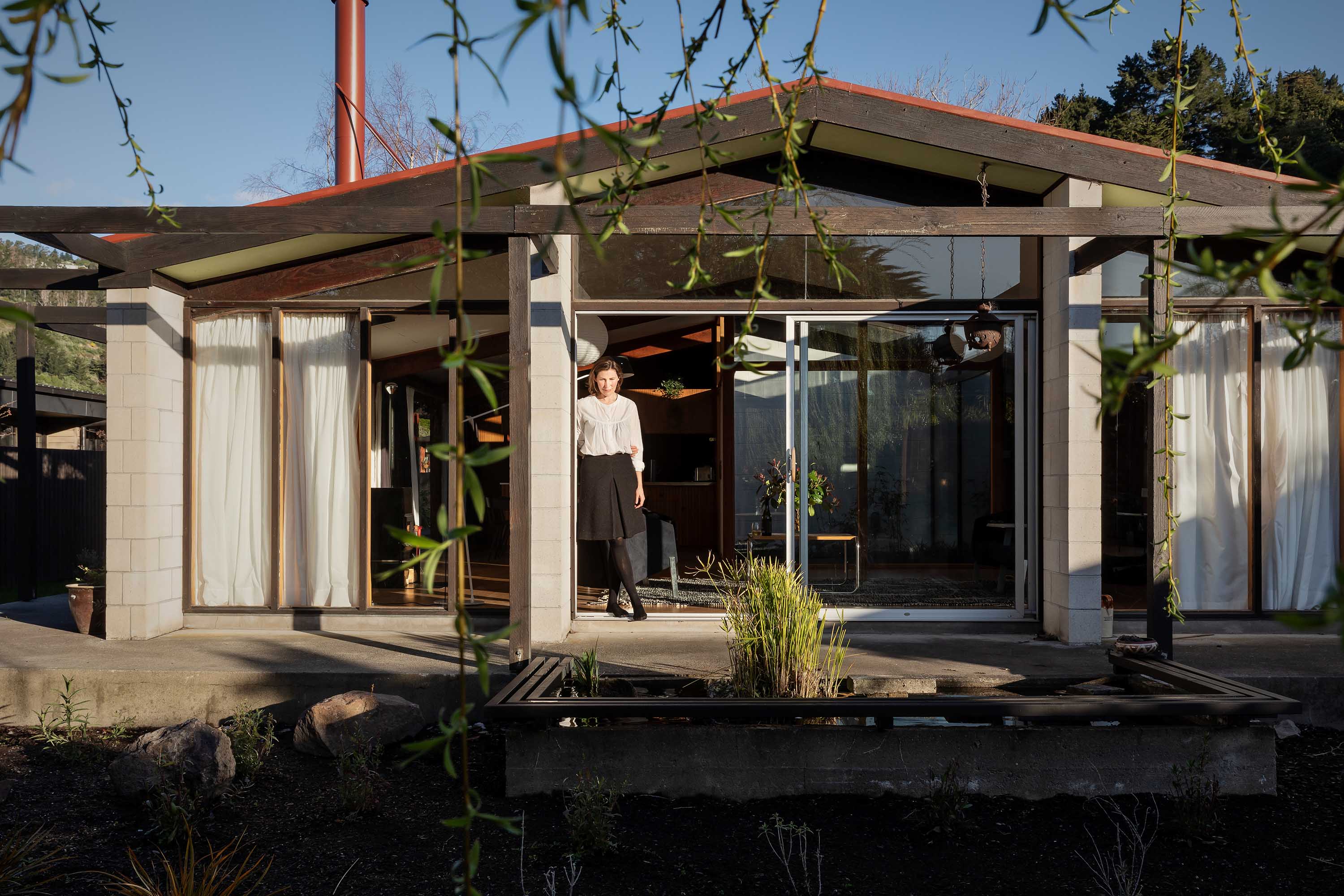 Maciaszek told a great story – a Polish refugee who had come to Aotearoa just after World War II. He regaled the Arnolds with tales of the Polish resistance, of how he escaped a prisoner-of-war camp, and fled through the snow after stealing an American soldier’s coat. Later, while based in the British-controlled territory of occupied Germany, he met and married his German sweetheart Waltraud Pientka. After originally deciding to go to Canada, the couple chose Aotearoa on a whim after an evocative poster caught their attention when booking their passage. They arrived here in 1951.

Maciaszek found work in Kaiapoi as a baker, cycling there each morning from his cottage in Addington, a 48km round trip. Into his forties and still working as a baker, he decided to study law and was admitted to the bar in 1968 as a barrister and solicitor. Matt recalls another story of how, in 1966, Maciaszek entered into correspondence with the Inland Revenue Department, written in rhyming couplets, to which a good-humoured tax officer replied in matching verse.

The Arnolds were charmed by him, and charmed by the house. Maciaszek was clearly charmed by them, and offered them first right of refusal when he died. Almost a decade later, after the Arnolds had bought a Warren & Mahoney house around the corner, along with a classic modernist house in Ilam that they restored and sold, that’s exactly what happened.

It wasn’t until 2016, with the earthquake issues and insurance payout sorted, that they could finally settle. The house survived the earthquakes remarkably well, though there were a couple of cracks in the Ōamaru concrete block walls, and there’s a tilt to the concrete slab that Matt suspects could well have been there for decades. It’s an insurance write-off – one they would never dream of demolishing or selling.

Over three years of spare moments, Kate picked away at restoring the house. She rolled many layers of paint over the nicotine stains, and cleared out the courtyard and had its windows double glazed. She restored the timber joinery and hung new curtains, made by her friend, the fashion designer Beth Ellery. She removed all the sliding doors and replaced the ball bearings. She had a new sewer line dug, cutting holes in the concrete slab, and then laid new cork floors. Last year, the Arnolds planted a garden to a design by Robert Watson Landscape Architects.

The house now functions as extra accommodation for friends and family visiting from out of town, and as a holiday rental for those in the know. But you get the sense the house was bought with less of an idea of what it could do for the Arnolds, and more what they could do for it. They’re still figuring out how it might best work.

“There was an element of serendipity with this place. That always seems to happen with us,” says Kate. And for that, we are all grateful. 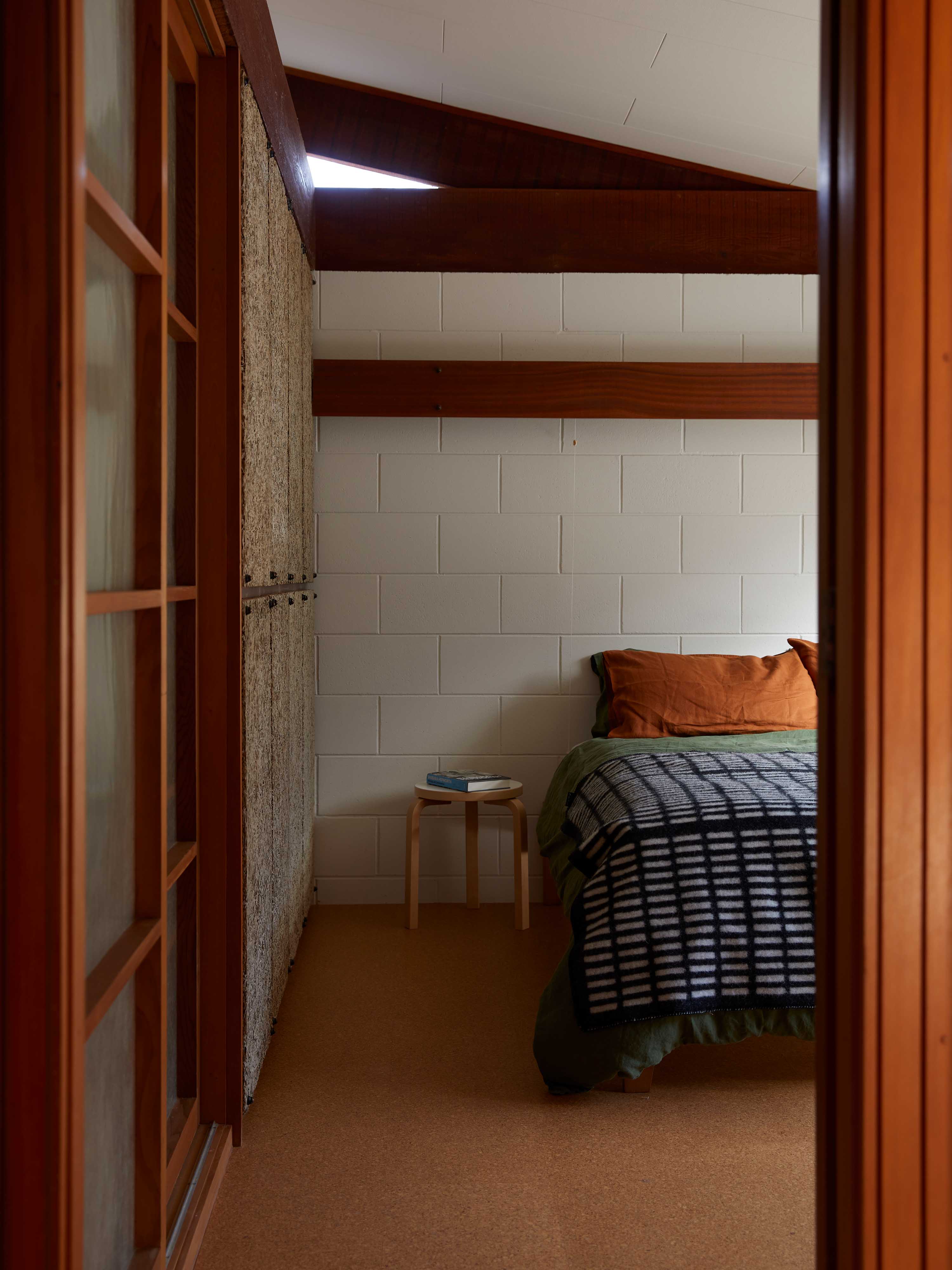 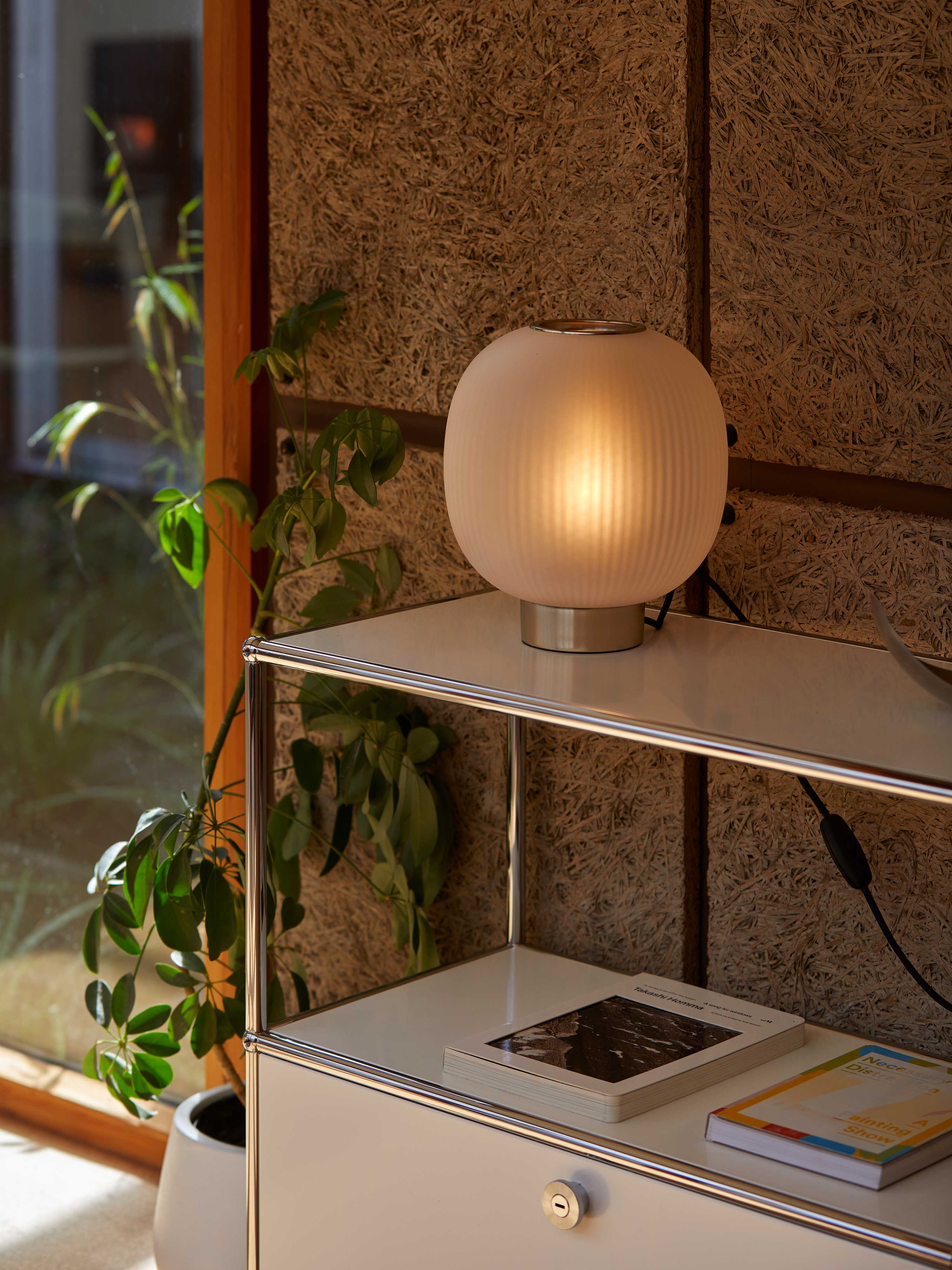 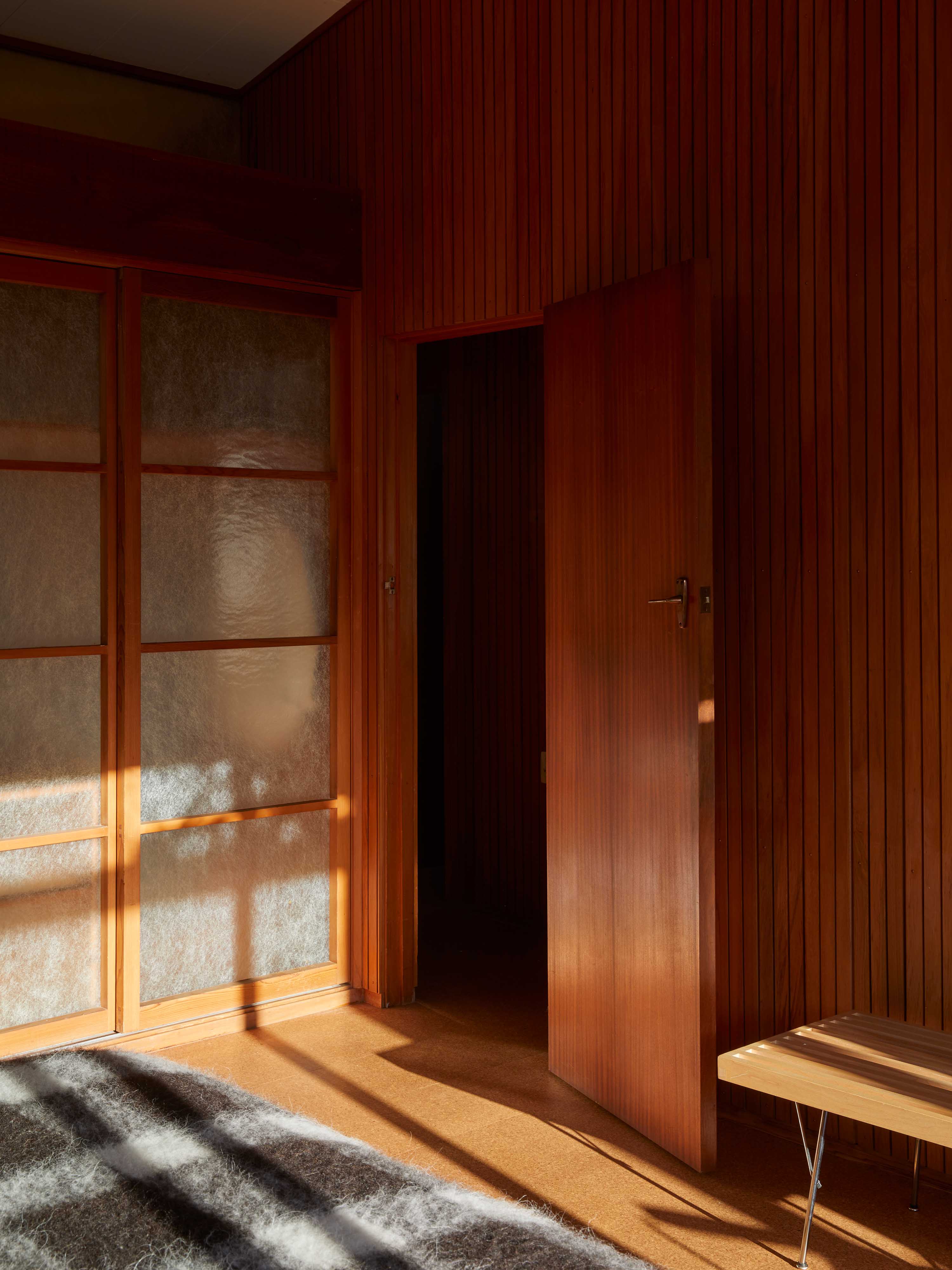 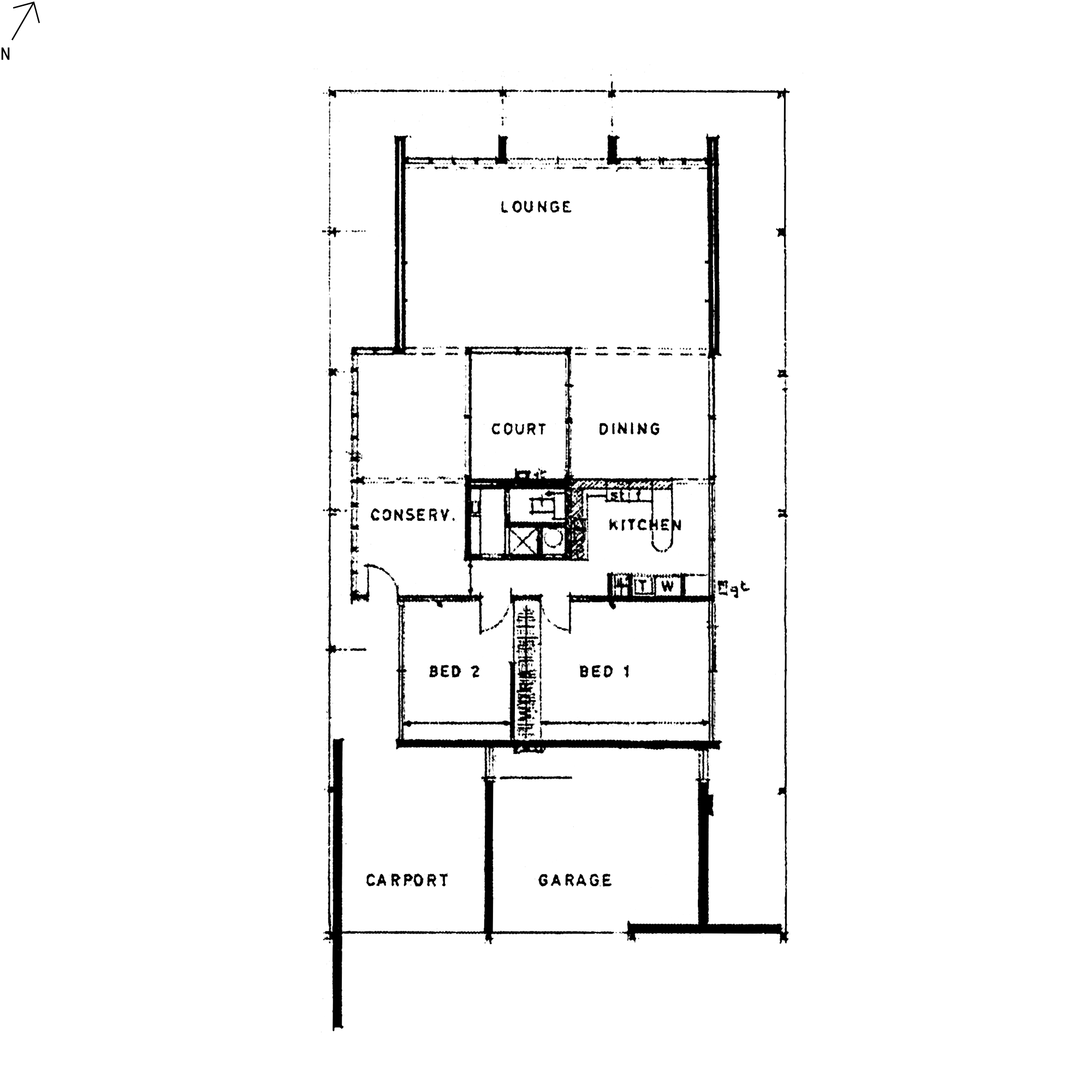