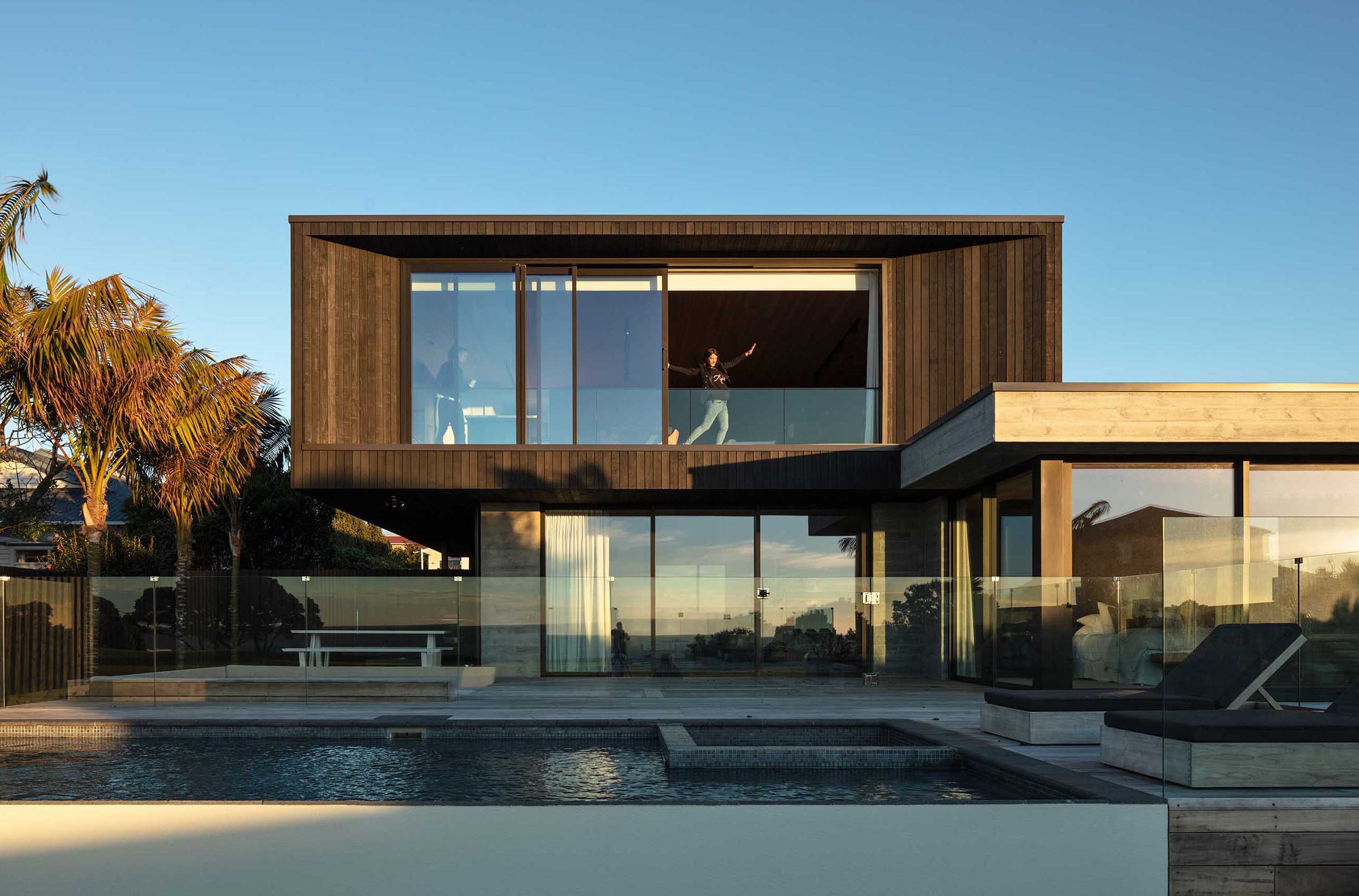 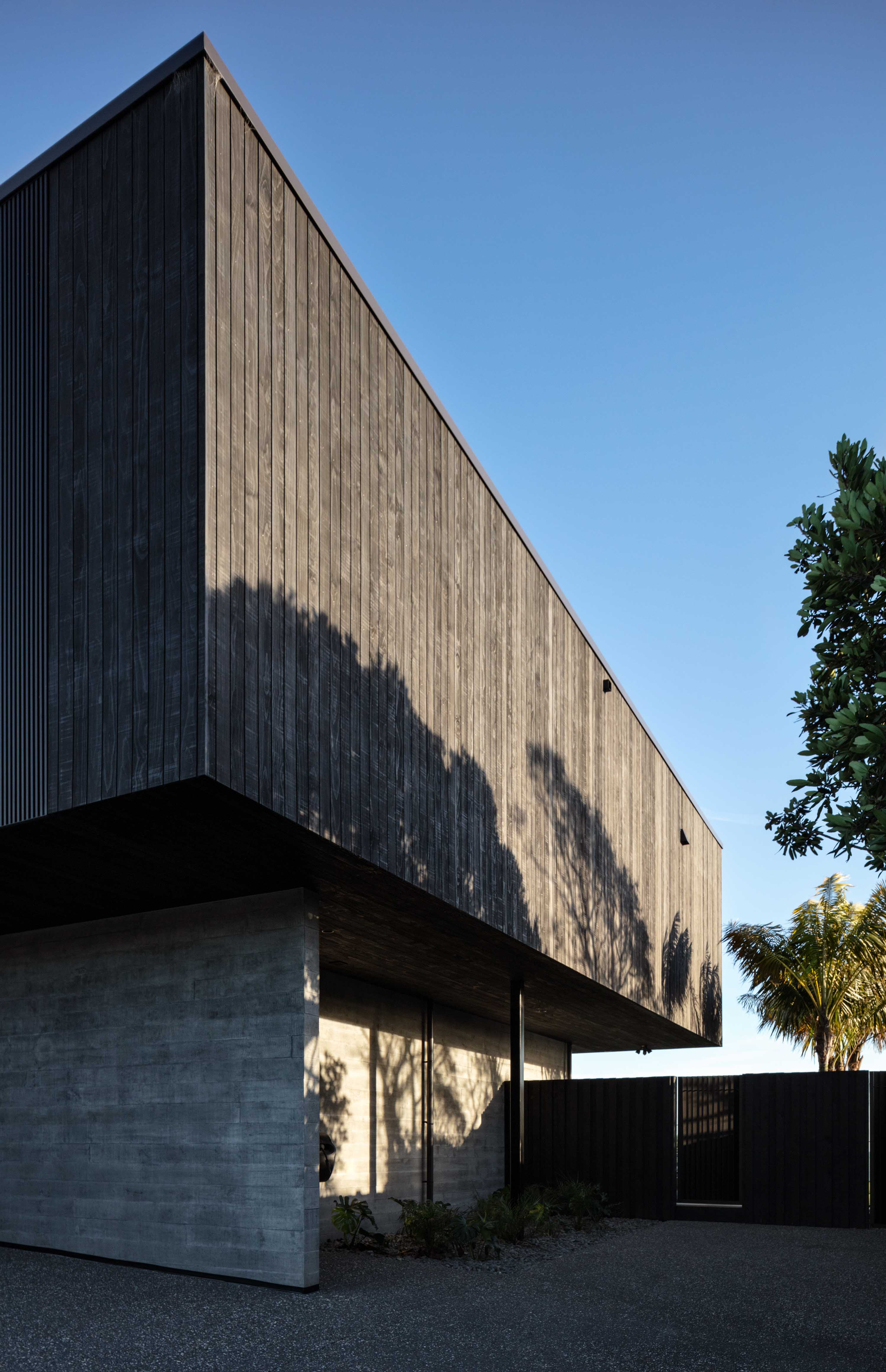 It is but 1.8 kilometres or five blocks and a flat walk to the spectacular polished aluminium facade of the Govett-Brewster Art Gallery/Len Lye Centre, not to mention the many and varied delights of the White Hart Hotel across the road (from experience, I can recommend the excellent craft-beer selection and nicely charred sourdough pizzas at Ms White). And yet, to spend time at this house in Moturoa, Ngāmotu New Plymouth, you’d be forgiven for thinking you were in a sleepy beachside town.

“The local vernacular is really relaxed,” says architect Evelyn McNamara, who designed the home. “It has a classic ‘no fence’ coastal feel.” In front of the house is a large, grassy reserve, onto which this site and all the neighbours open, with nary a gate or a fence of any serious intention in sight. Beyond the reserve is the New Plymouth Coastal Walkway. And beyond that, the Tasman Sea, by turns beguiling and fierce. “I grew up in Whanganui,” says McNamara, now based in Tāmaki Makaurau Auckland, “so I’m really familiar with the west coast environment and how wild it can get.”

When James and Fanny Annabell bought the site, there was a lump of a house in the middle of the land that had started life in the 1940s and ended life ultimately as a mish-mash of styles and levels. “It was kind of creepy, actually,” says Fanny as she shows me around the property. There was a great view from the main bedroom upstairs, but little connection to the reserve or the view from the main living areas. The couple, who are very social and love to entertain, wanted their house to reflect that. It needed to serve them day to day, but also work well for a Sunday barbecue with their friends, and their kids. Fanny – who is French – was also keen to resolve the lack of accommodation for visitors from Europe, who would sometimes stay for months at a time.

McNamara’s response was clear-eyed and rational but also sensitive – she wanted to create a beachside retreat, minimal yet warm, with a sense of security and safety from the wilder weather, and a sense of fun for when the weather is fine. Her plan demolished the old house, subdivided the site and called for two dwellings – one for the Annabells and a smaller one for guests. She pushed the front house as far forward as was allowed, effectively treating the reserve as a lawn, connecting to it directly from a deck and pool at ground level.

The design called for open-plan entertaining spaces plus a main bedroom suite downstairs, and a more intimate living area upstairs – where the view rolls out to the horizon – plus a couple of bedrooms. In effect, instead of splitting the house horizontally – bedrooms on one level, living on another – the design splits it vertically, creating separation for the parents, and two very different living zones. “Downstairs is where the relaxed, social entertaining happens,” says McNamara. Guests arrive, wander through the downstairs living area and head out to the swimming pool, which has virtually no barriers to the reserve thanks to a sunken ha-ha on the public side, which allows the pool wall to serve as the pool fence. 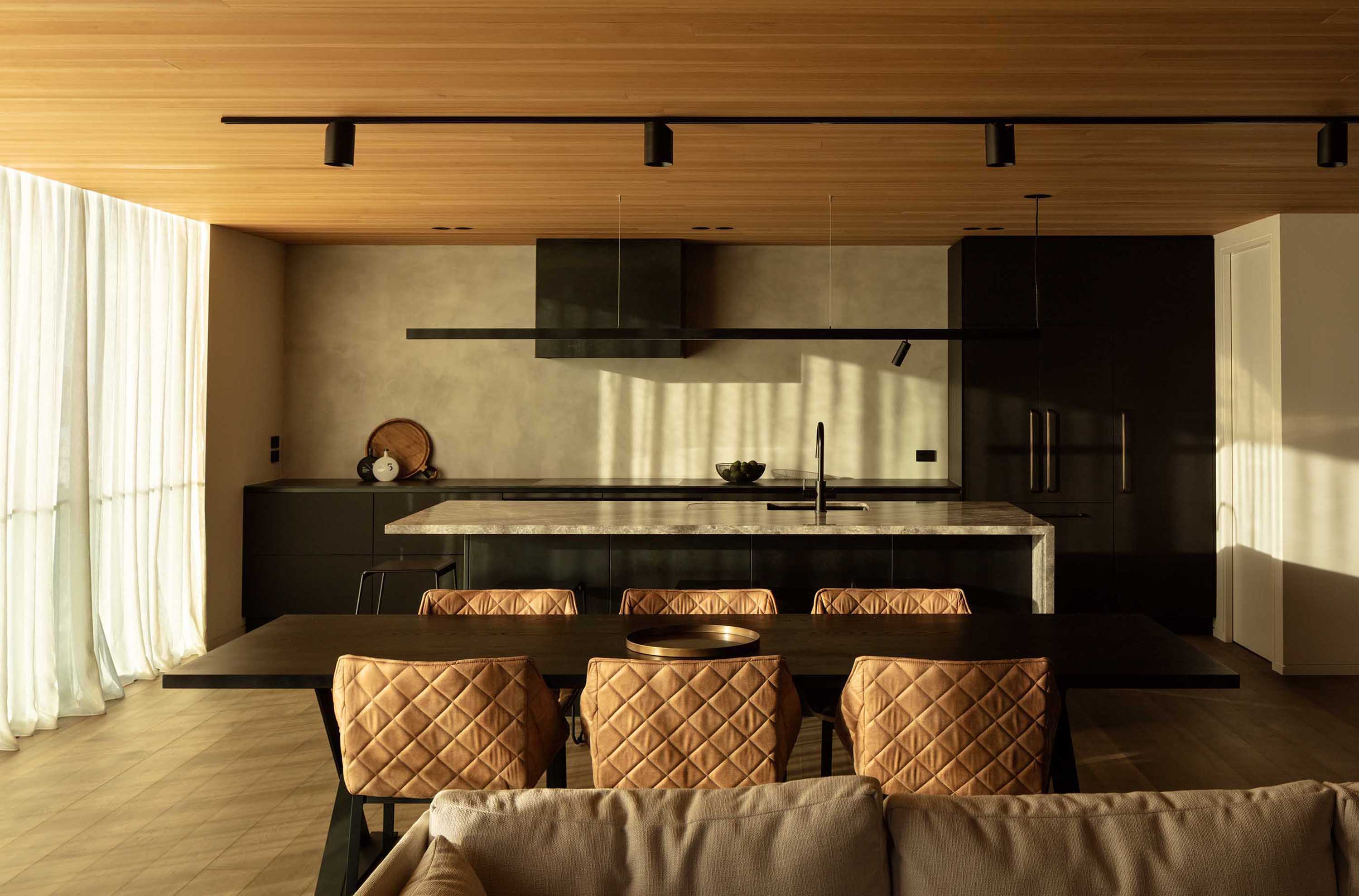 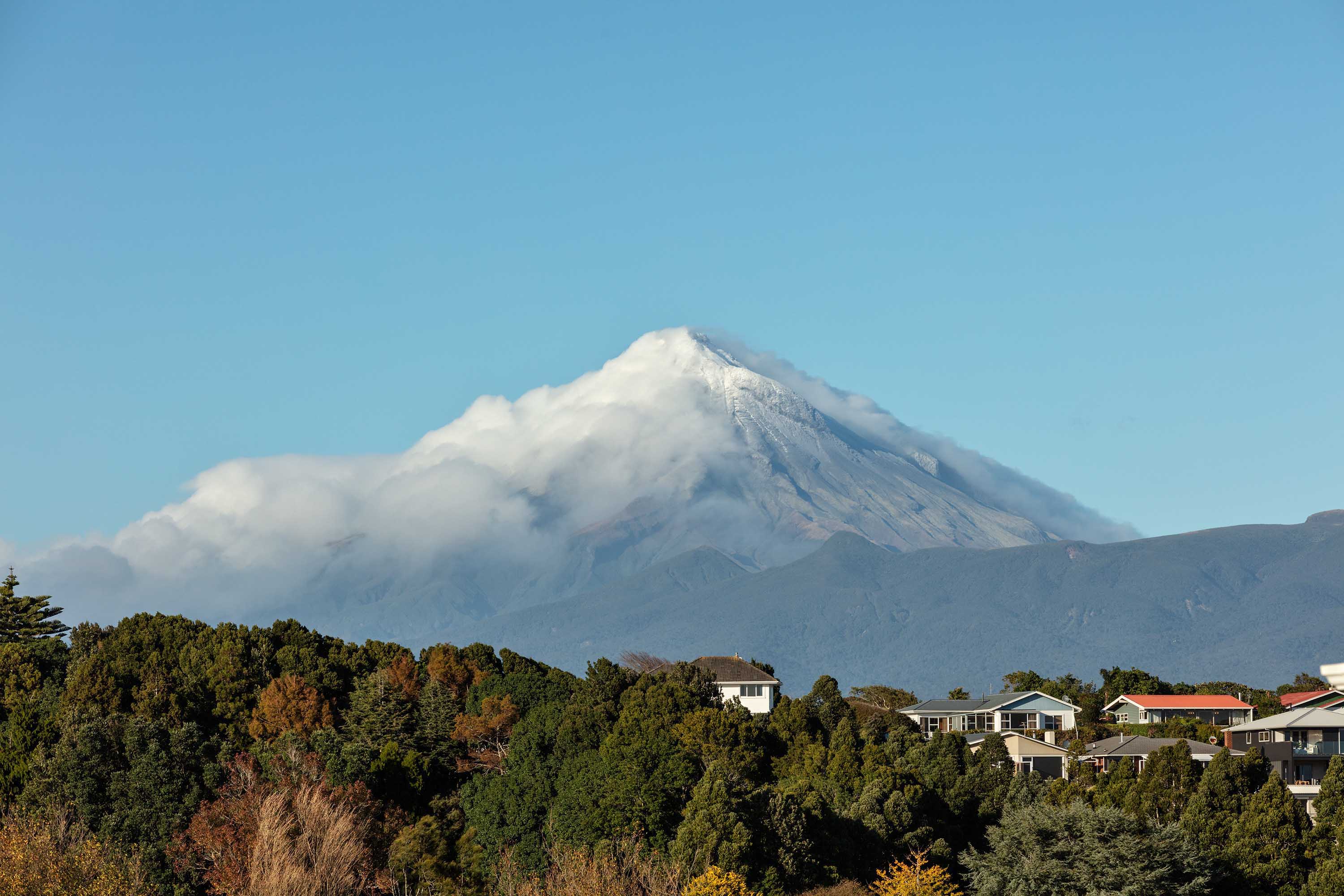 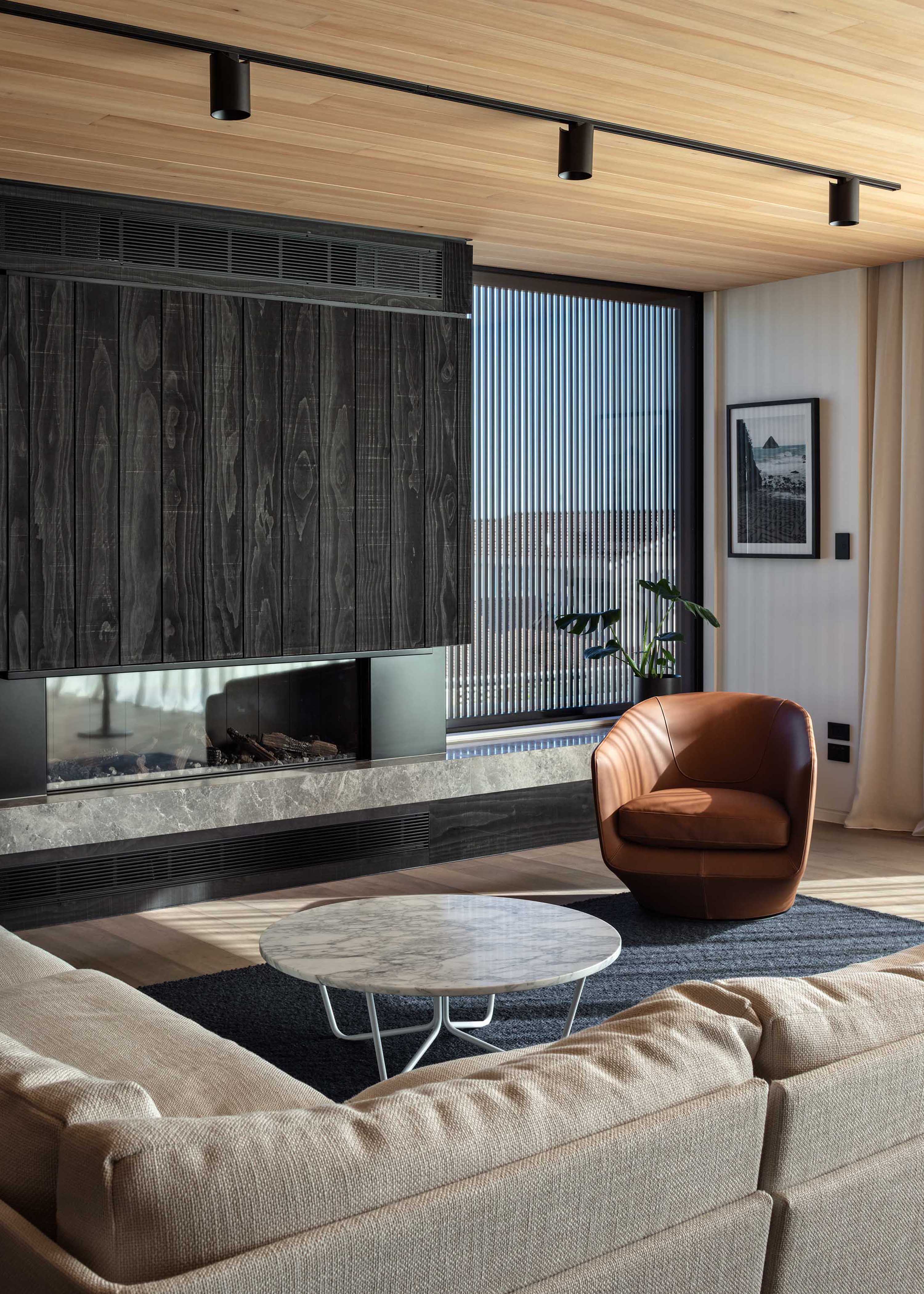 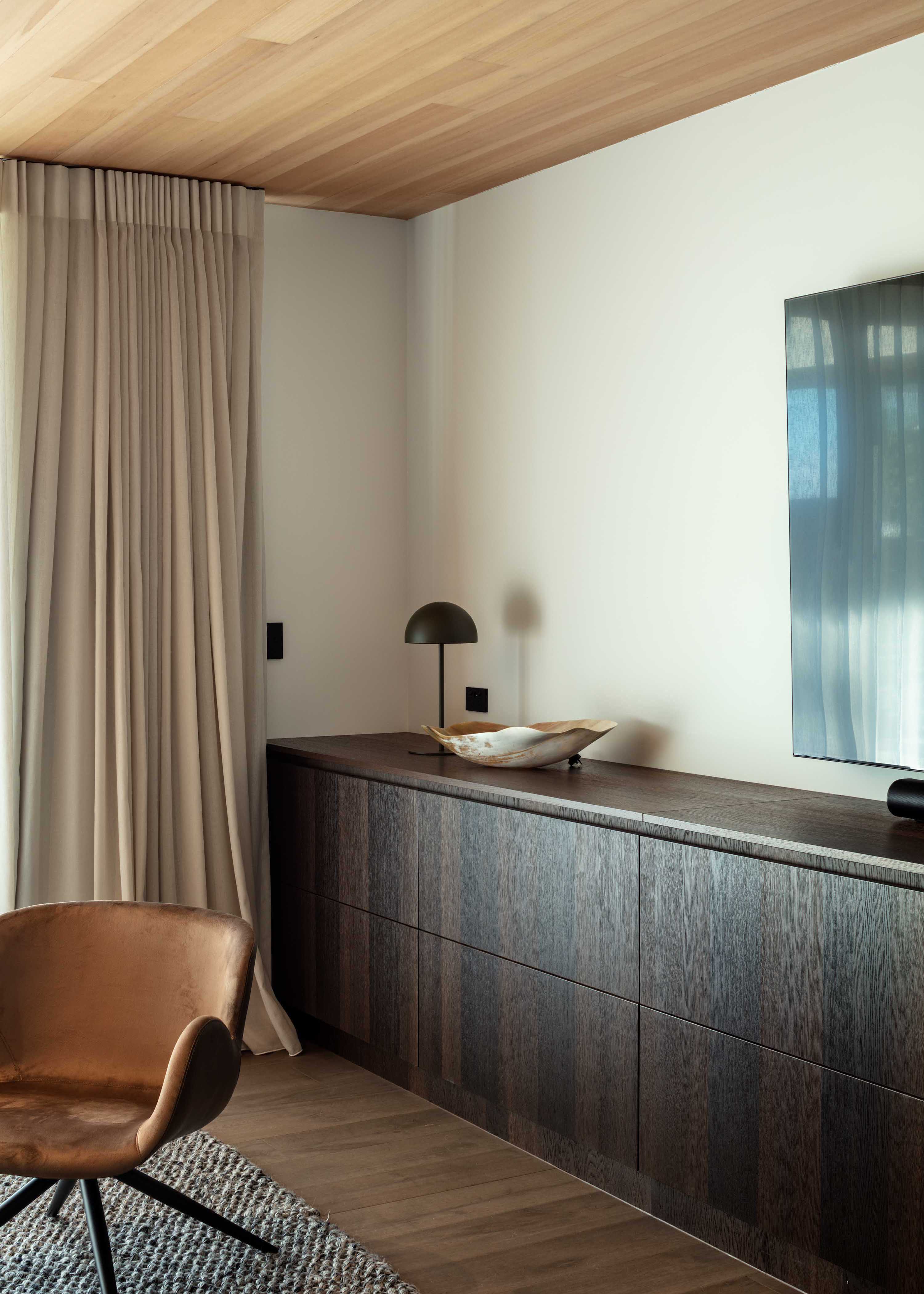 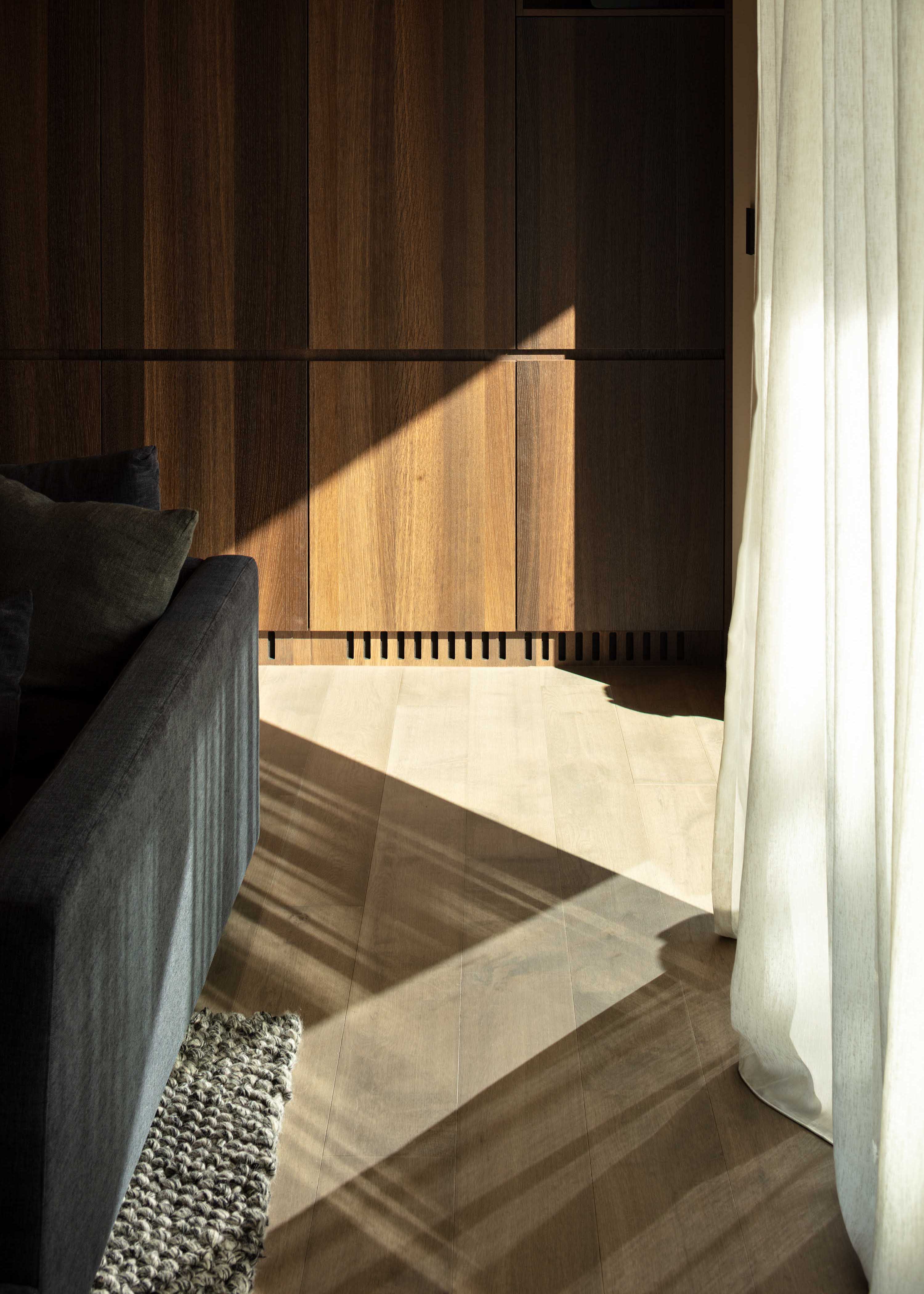 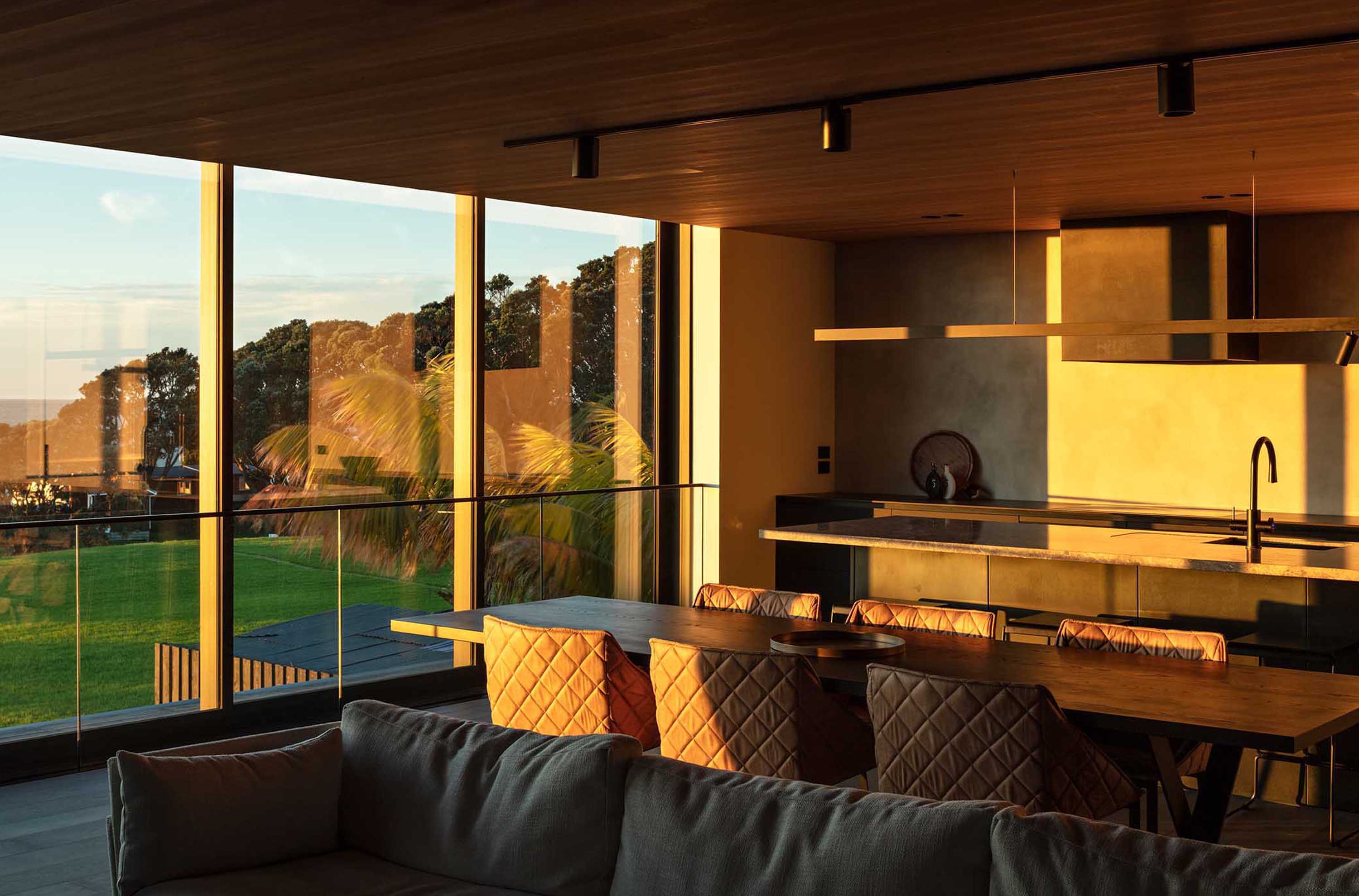 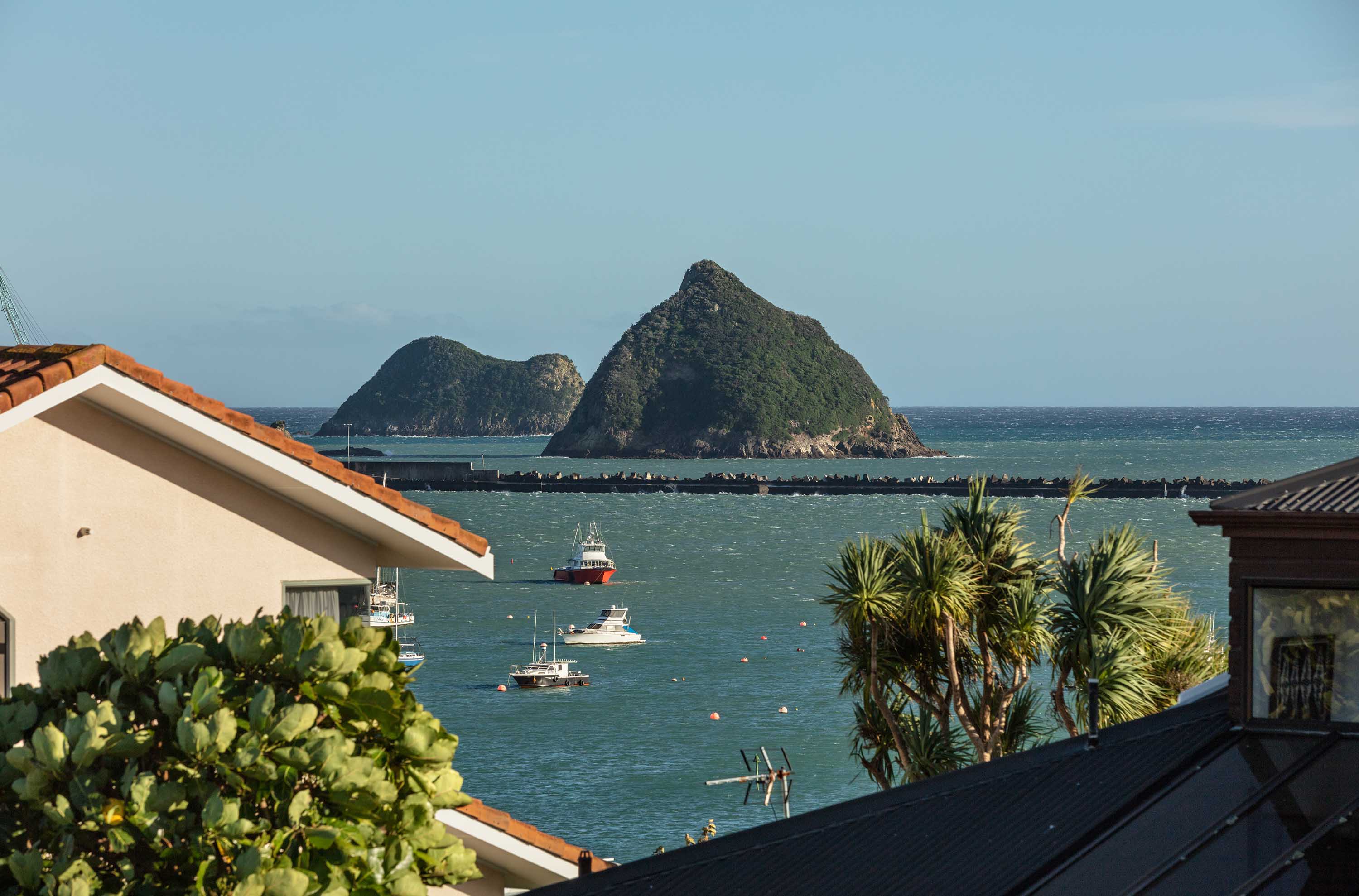 The effect is generous, open – a blurring of public and private which is particularly delightful. The couple mow the grass on the reserve, which is mainly used by local dog walkers and neighbours. “And we’ve got that seamless view – we’re lucky to have that,” says James. “The pool connects with the reserve.” As does the couple’s dog, who wanders around and into nearby houses for a scratch and a snack. “She’s basically become the neighbourhood dog,” he says.

Upstairs is more private – a long living area with an Ashin-clad ceiling, dark-stained timber cabinetry and yet more timber in a kitchen devised by local designer Annika Rowson. “It’s not easy to select three timbers that go together without clashing,” says McNamara. “They all had to work together.” In summer, full-height sliders pull back to reveal a glass balustrade, which turns the living area into a sort of covered verandah. On really sunny evenings, an amorphous floaty curtain diffuses the low late-afternoon light; on a wild winter’s night, the space transforms into a secure, warm retreat.

You’ll note there’s no deck upstairs. “I really didn’t want a deck at the upper level,” says the architect. It would shade the lower outdoor living space, which is built for entertaining. As a result, upstairs has a slightly more formal, discreet feel – and the view is more immediate, rather than something you have to go and look at from the edge of a deck.

Of course, the issue with going up in such a beachy neighbourhood is the multiplicity of roofs. There’s one of everything in this suburb: you can see them, and they can see you. In response, McNamara made the side walls of the home almost solid, capturing the outlook to the Tasman through a long view-finder facing north, and views of Taranaki to the south. On the side walls, there are framed glimpses of Paritutu Rock and other landmarks, lightly obscured through aluminium screens.

The house has a robust, slightly modernist exterior, encased in board-formed concrete and black-stained timber, as well as those screens, which sit flush in the cladding, rather than feeling like afterthoughts bolted on later. “I wanted the house to have a really confident, solid, robust west coast aesthetic,” she says, “but I also wanted it to have a real sense of warmth and enclosure on the inside.” The juxtaposition is quite striking. “A lot of houses with an exterior like this can be quite sterile and cold on the inside.”

The Annabells finished the house last year, and are now building the guest house behind to McNamara’s design. It will have the same black timber exterior as the main home without the concrete base, and it will have a pitched gable, rather than a flat roof – which will help to protect the views from the main dwelling’s upstairs bedrooms. “I didn’t want it to look as though the larger house had a baby and spat out a smaller version of itself,” says McNamara.

It’s a house of layers and zones, of carefully thought-through scenarios and ways of living, but it doesn’t feel mannered or over-worked – in fact, a serene, warm sense of calm prevails. “I love the scale, and the layout,” says McNamara. “This is one of my favourite projects.” 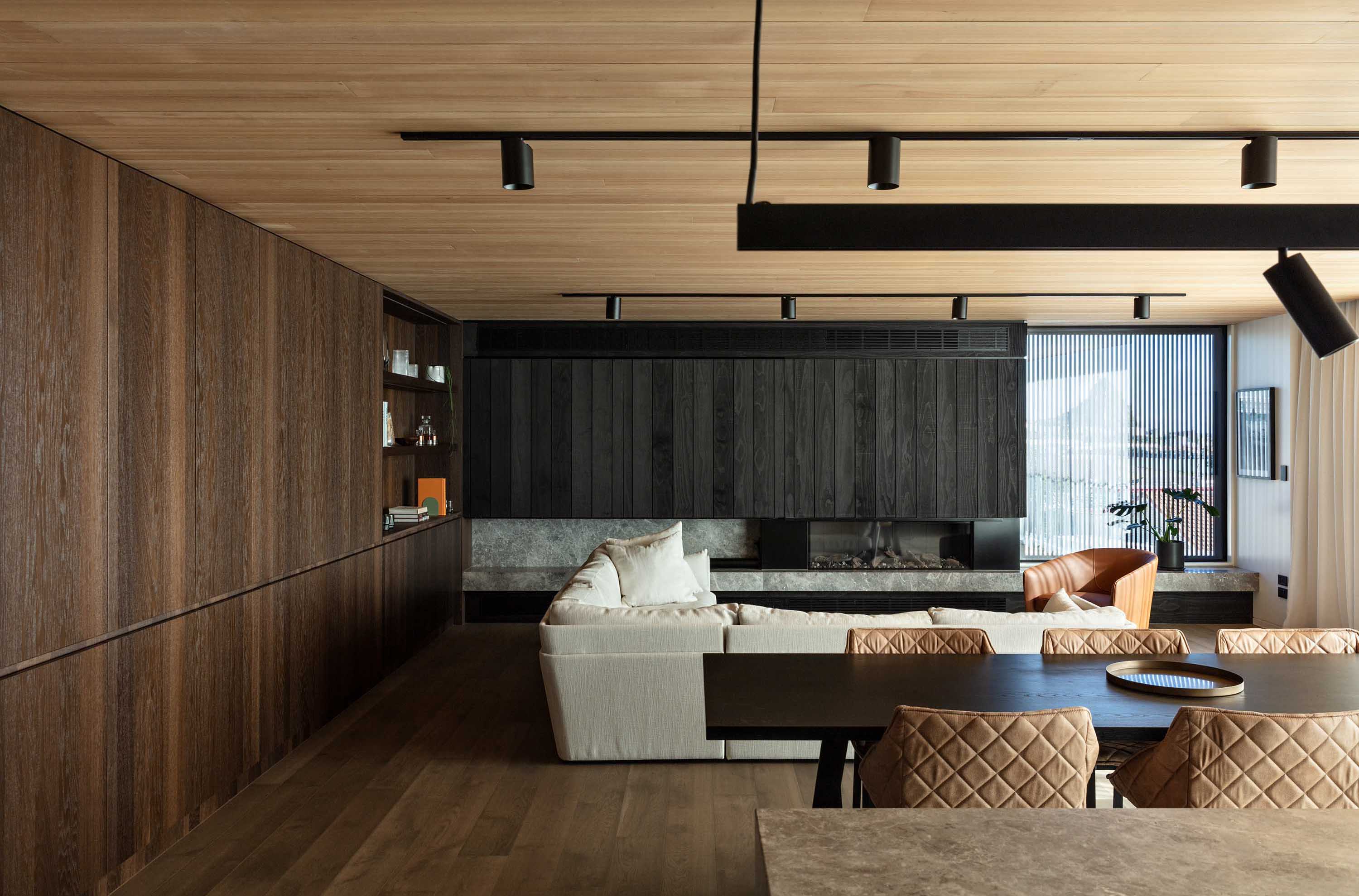 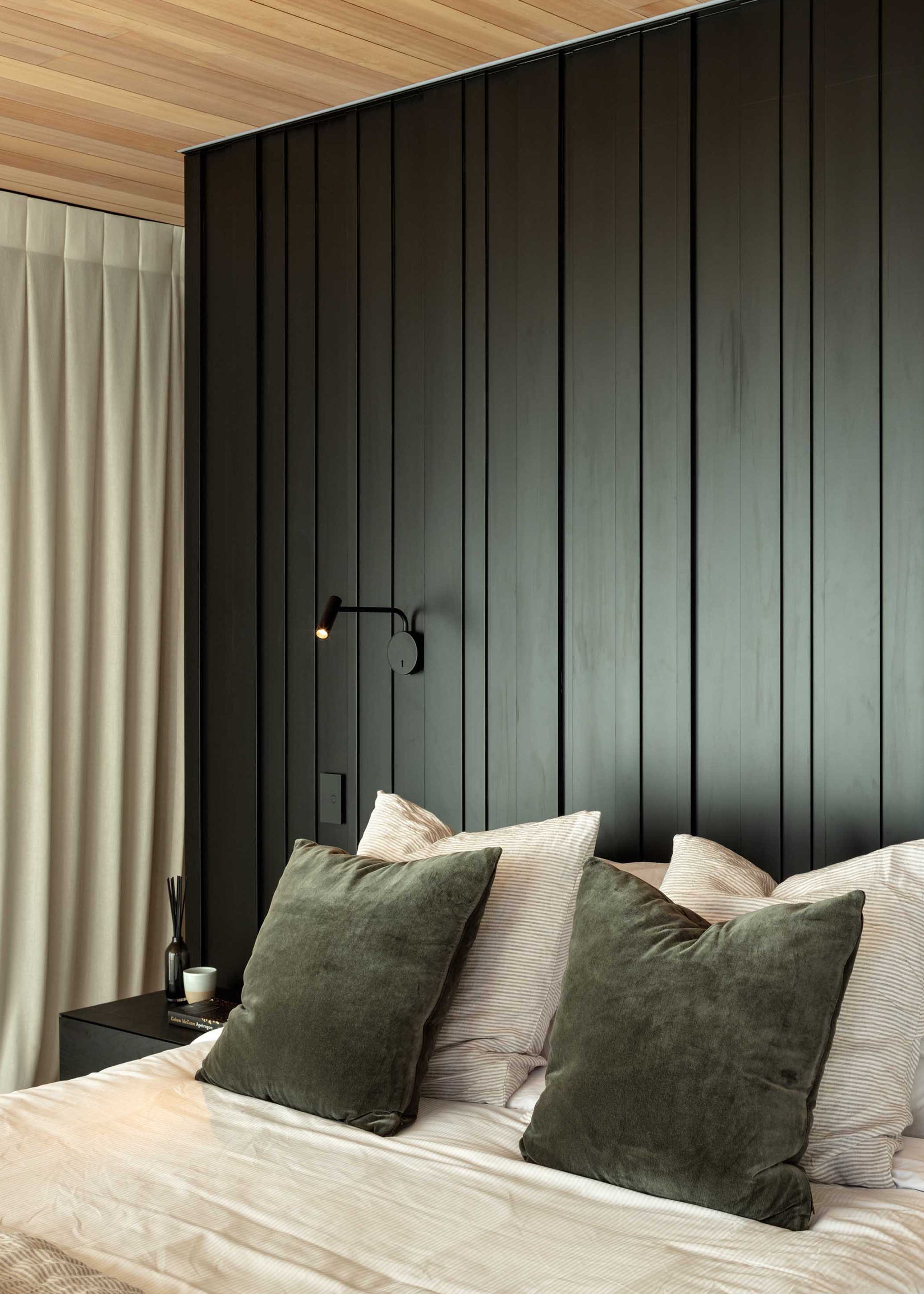 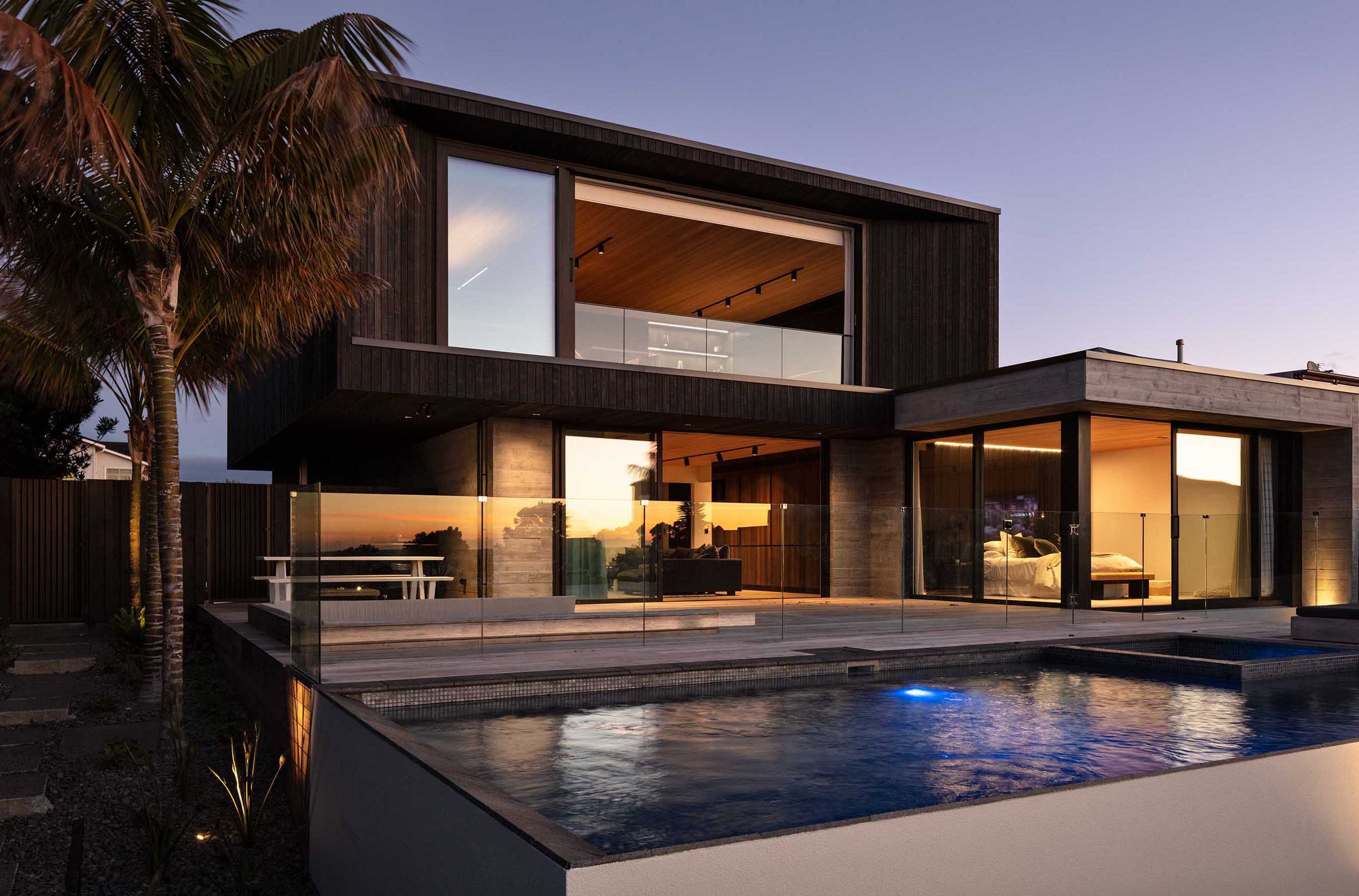 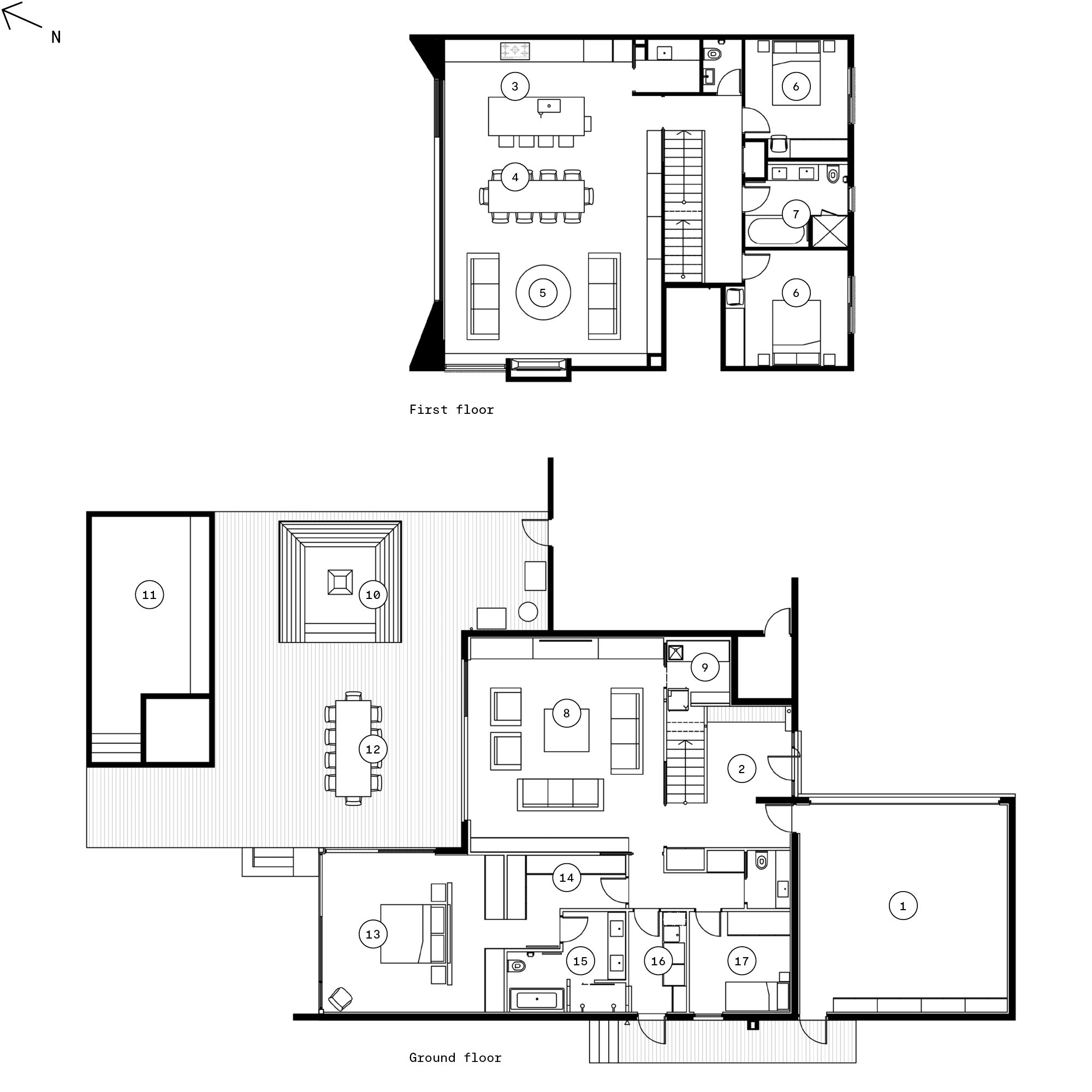 No items found.
This story is from Issue
12
Print EditionBuy Now