Paul Clarke builds a house for his family that draws on the memory of their former home.

Only Place I Want to Be 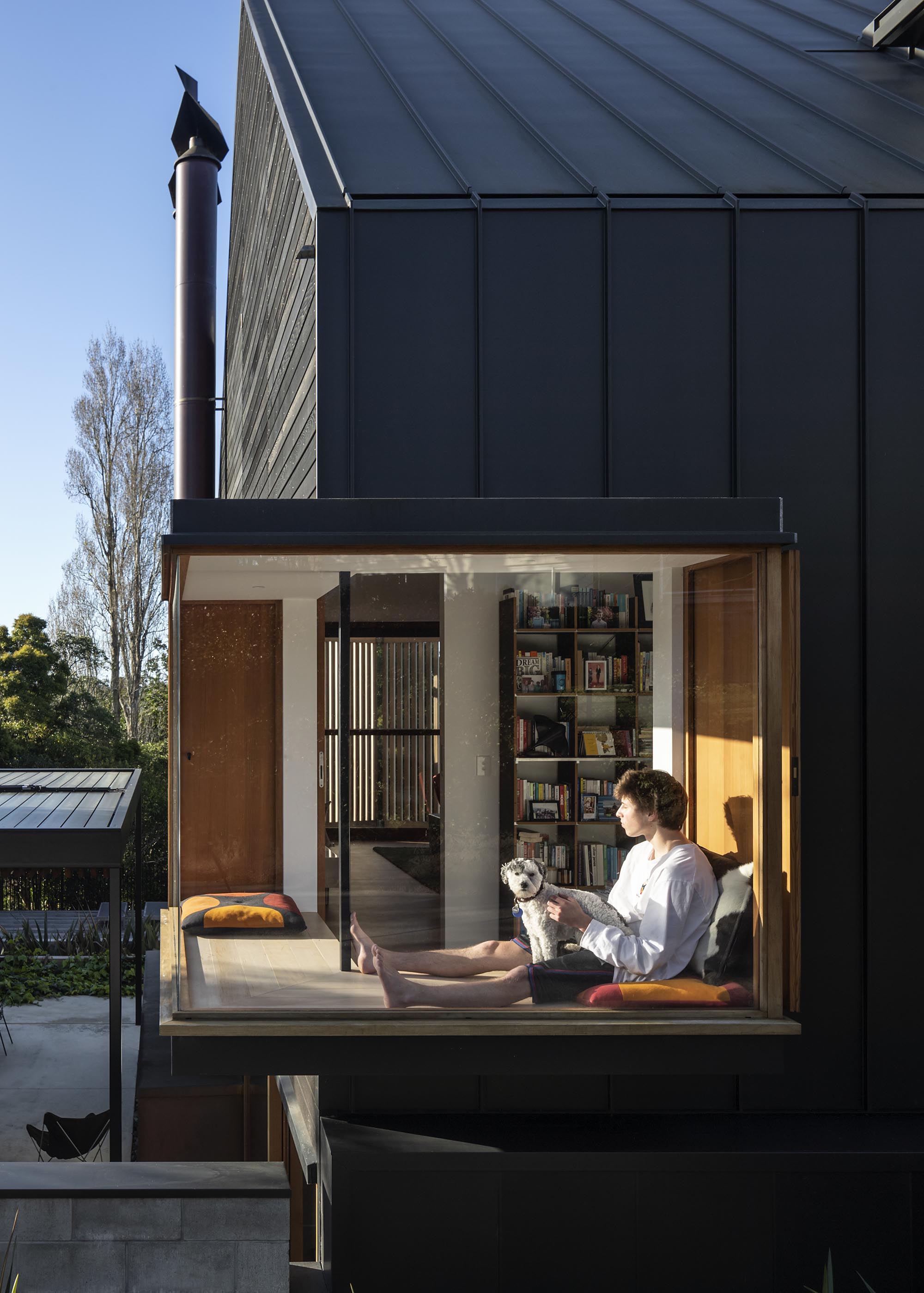 Only Place I Want to Be 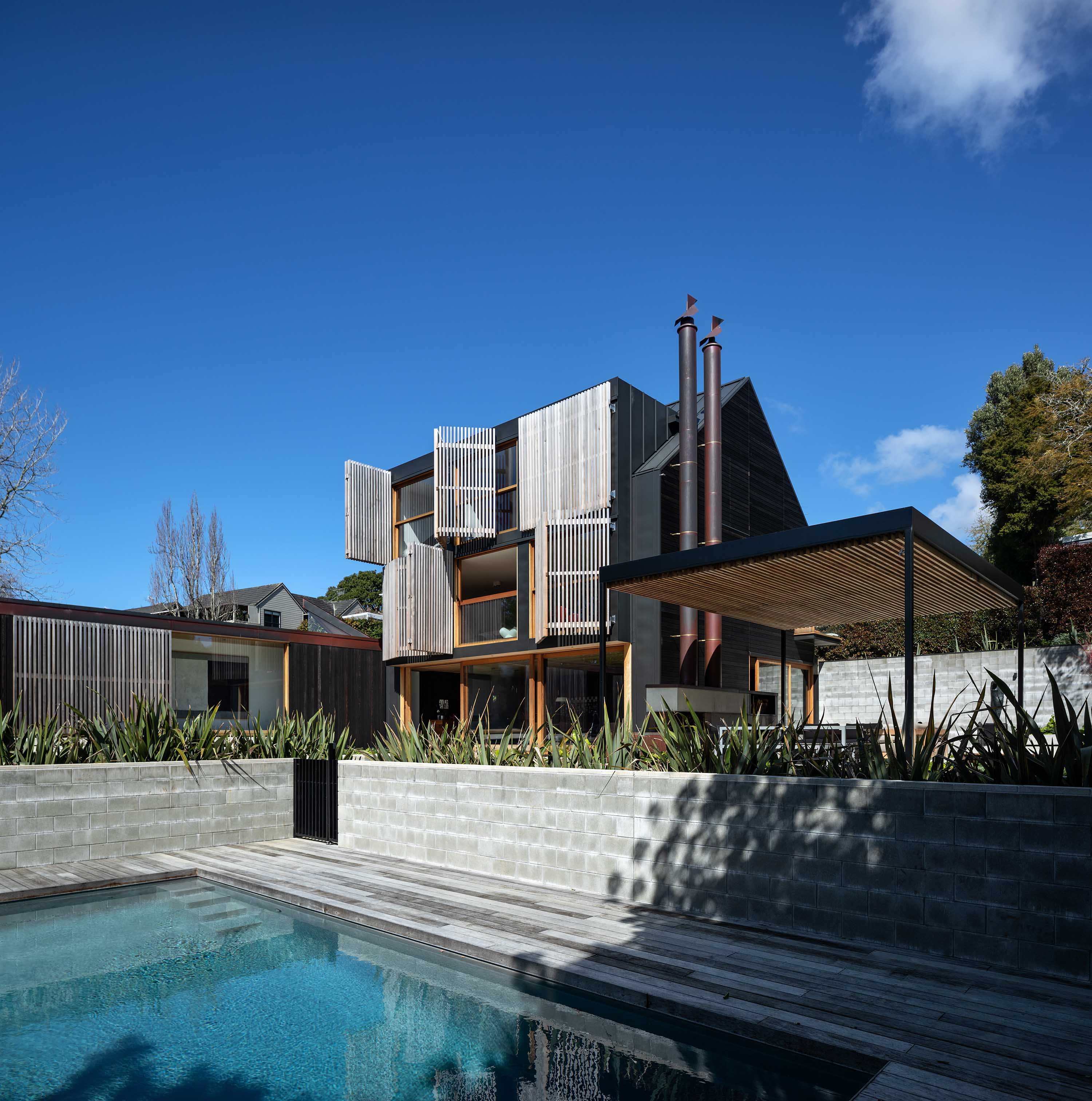 It’s not easy writing a love letter, especially one that has so much to say. The home Paul Clarke designed for his family is a metaphorical love note, writ large by a big-hearted guy. It’s one that references the past, present and future, one that speaks of family connections, an enduring marriage, relationships with friends and also with treasured art work and furniture collected over decades.

Paul and his wife Deb bought the site in Remuera, Auckland, in 2005 and lived in the 1930s black-and-white Tudor-style house for a decade. Their two boys grew up here, racing their bikes on the driveway, building tree huts and swings, playing basketball, cricket and rugby in the sprawling garden. A digger may have demolished their old house in one hour and seven minutes, says Clarke, but he has ensured its memory lives on. “The idea here was about family and memory and how you put that treasure trove of interests together to create something that’s unique to us,” says Clarke, of Studio2 Architects.

The home is situated down a long driveway that curves as it rounds the house to reach the entrance and car court. The descent leads you into an urban escape – a generous bowl with established trees that ring the site, forming a leafy green screen to the neighbourhood. The house might be surrounded by 10 homes, but there’s only one roof in sight.

On the descent, you connect with the main body of the home at the highest point of the site, which reduces the scale of the three-storey volume. You also pass an elegant bay window, a space that’s been dubbed the Control Tower – it’s where Cruz, the family dog, assertively monitors arrivals and departures.

Every space is imbued with layers of meaning – as seen in the entrance portal. The symbol pressed into the in-situ concrete wall  represents the number three – Paul’s tribute to Deb, who he’s known since they were school kids, and their two sons. It’s also the home’s street number. The board-formed walls, meanwhile, are the same size of the cedar weatherboards of the old house.

The highly crafted entrance also references Clarke’s early aspirations to be an artist. As the first boy to take on art as a subject at the small Dunedin school he attended, he felt passionate enough to put himself out on a limb. The 2250mm x 2550mm pivot door features a glass insert with the three primary colours. The play on the artist’s key colours is extended through dots of Perspex inserted into the concrete walls. Once inside, a sculptural skylight adds to the kaleidoscope effect.

Guests stepping into this portal interact with the light, the warmth of the timber-lined ceiling and polished concrete underfoot. Then there’s a material change from concrete to matai steps as you transition into the house. Ahead is the main body of the home, to the right is a glazed link that leads to the main bedroom. 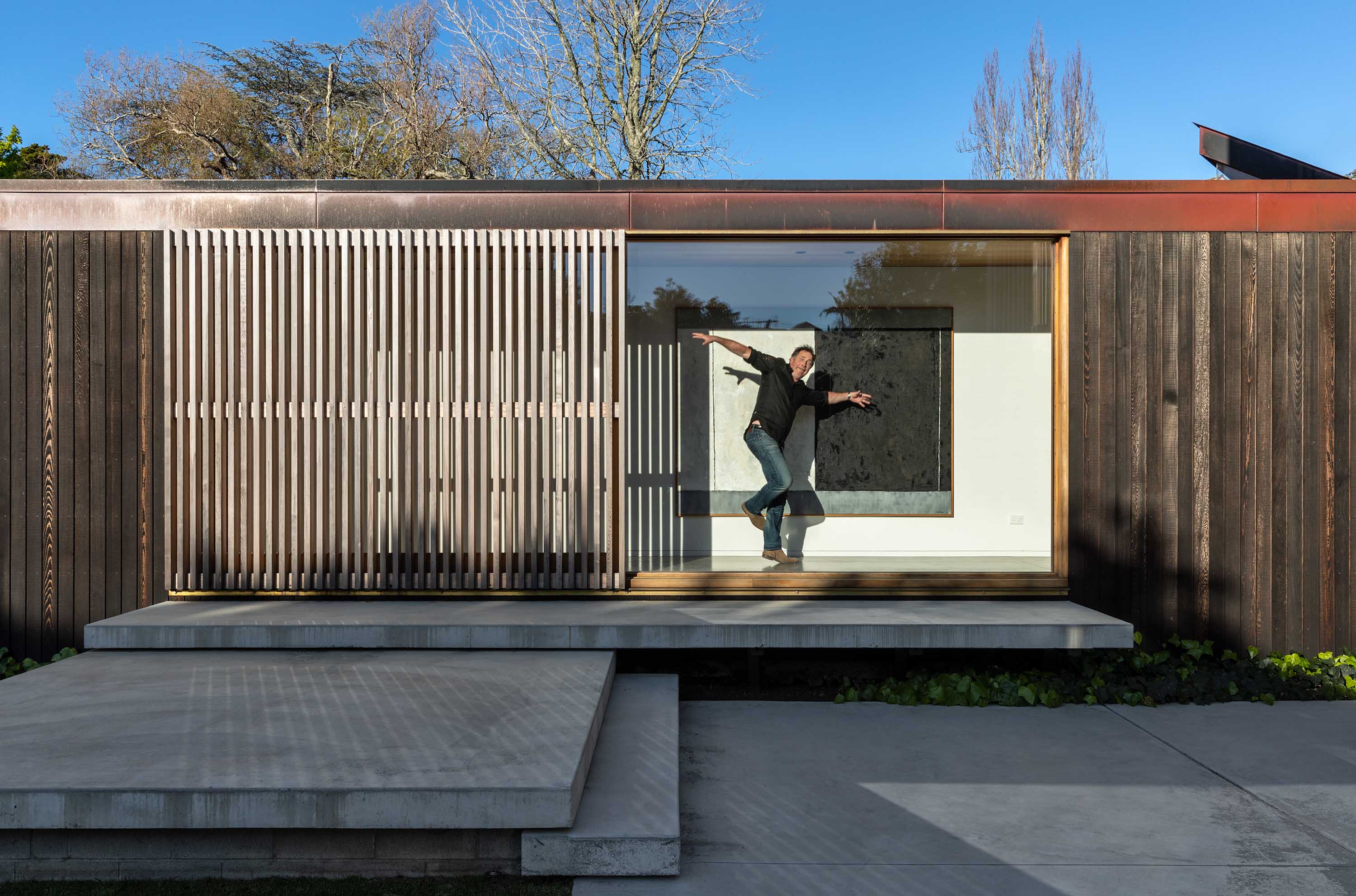 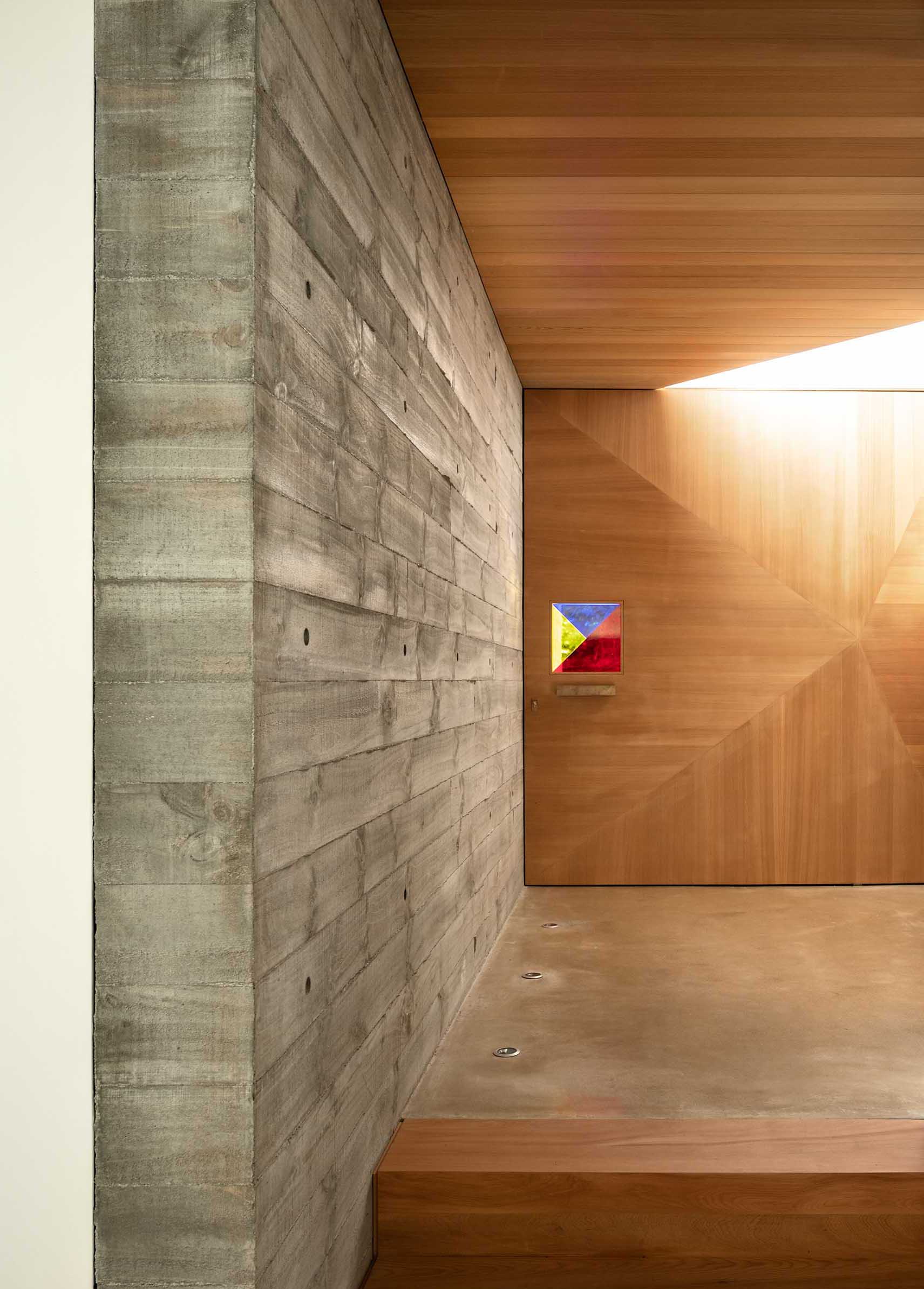 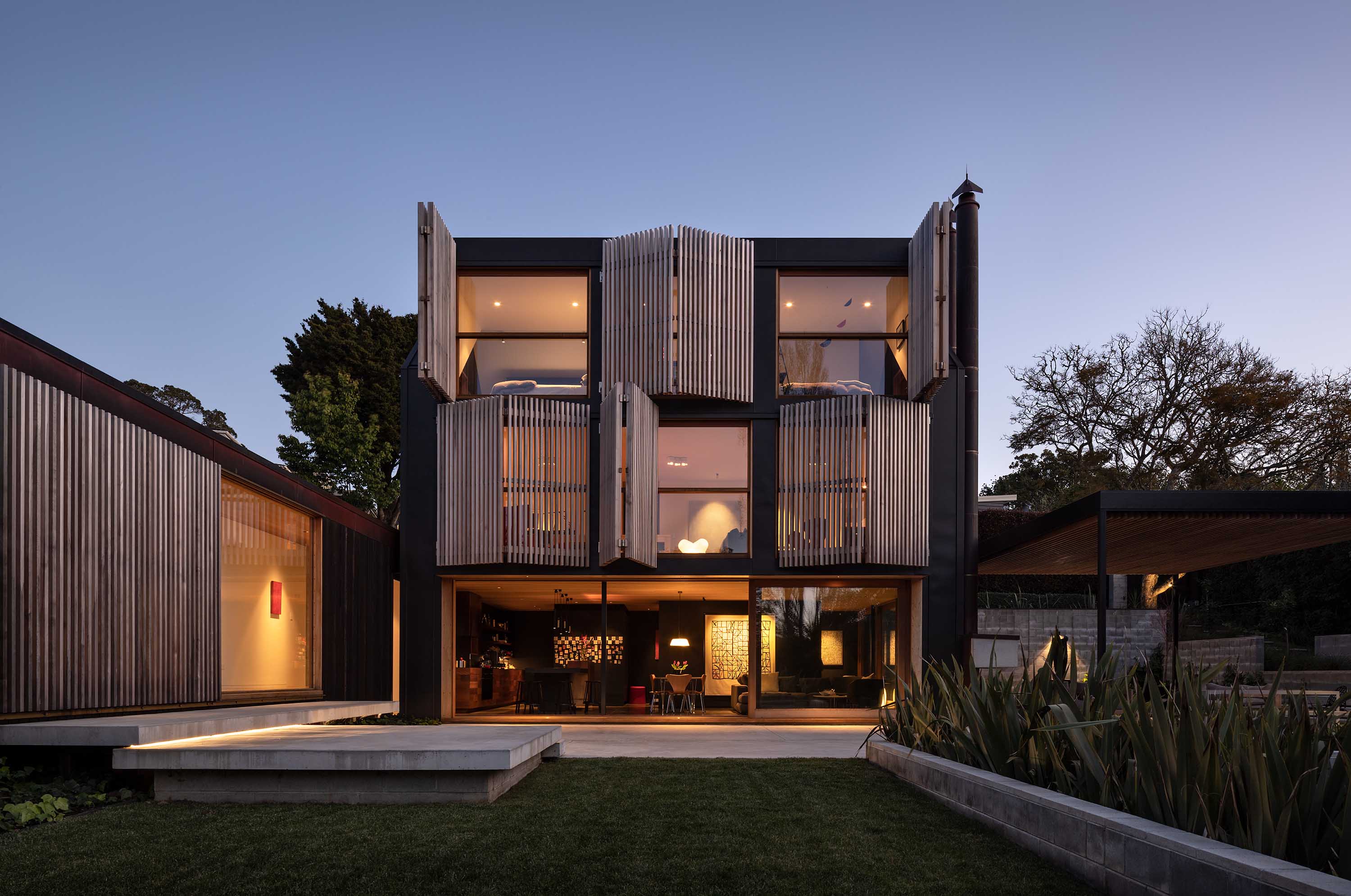 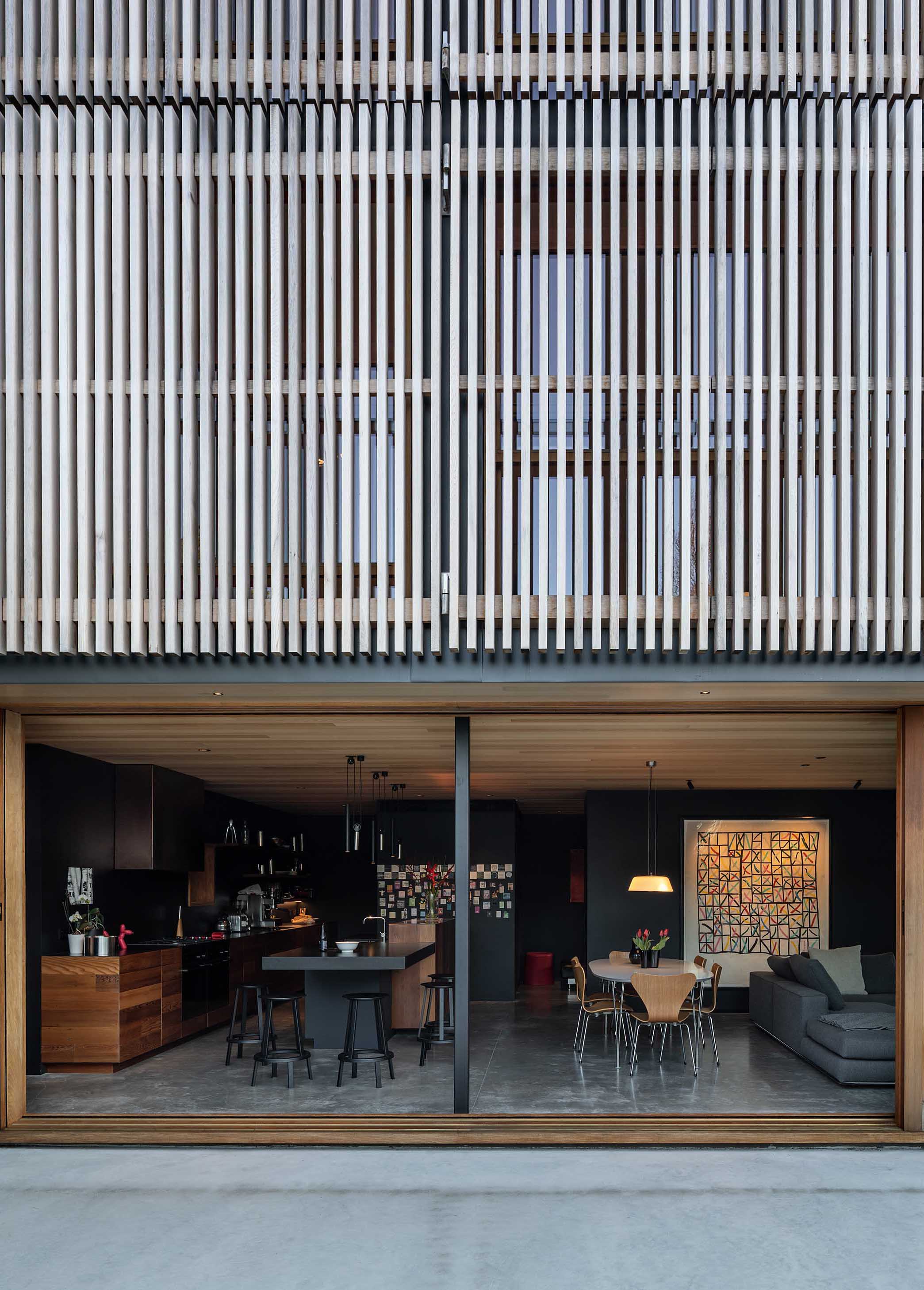 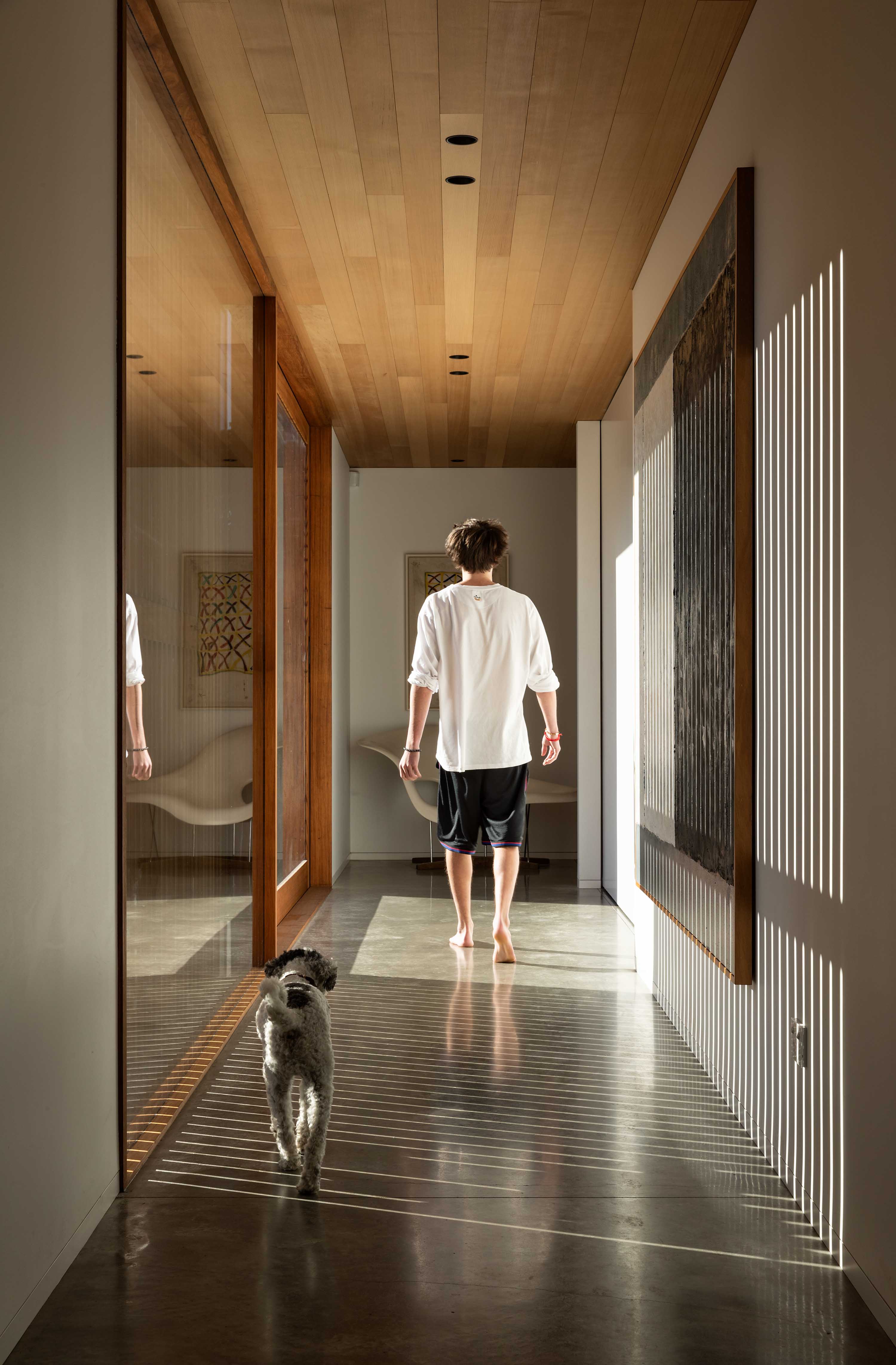 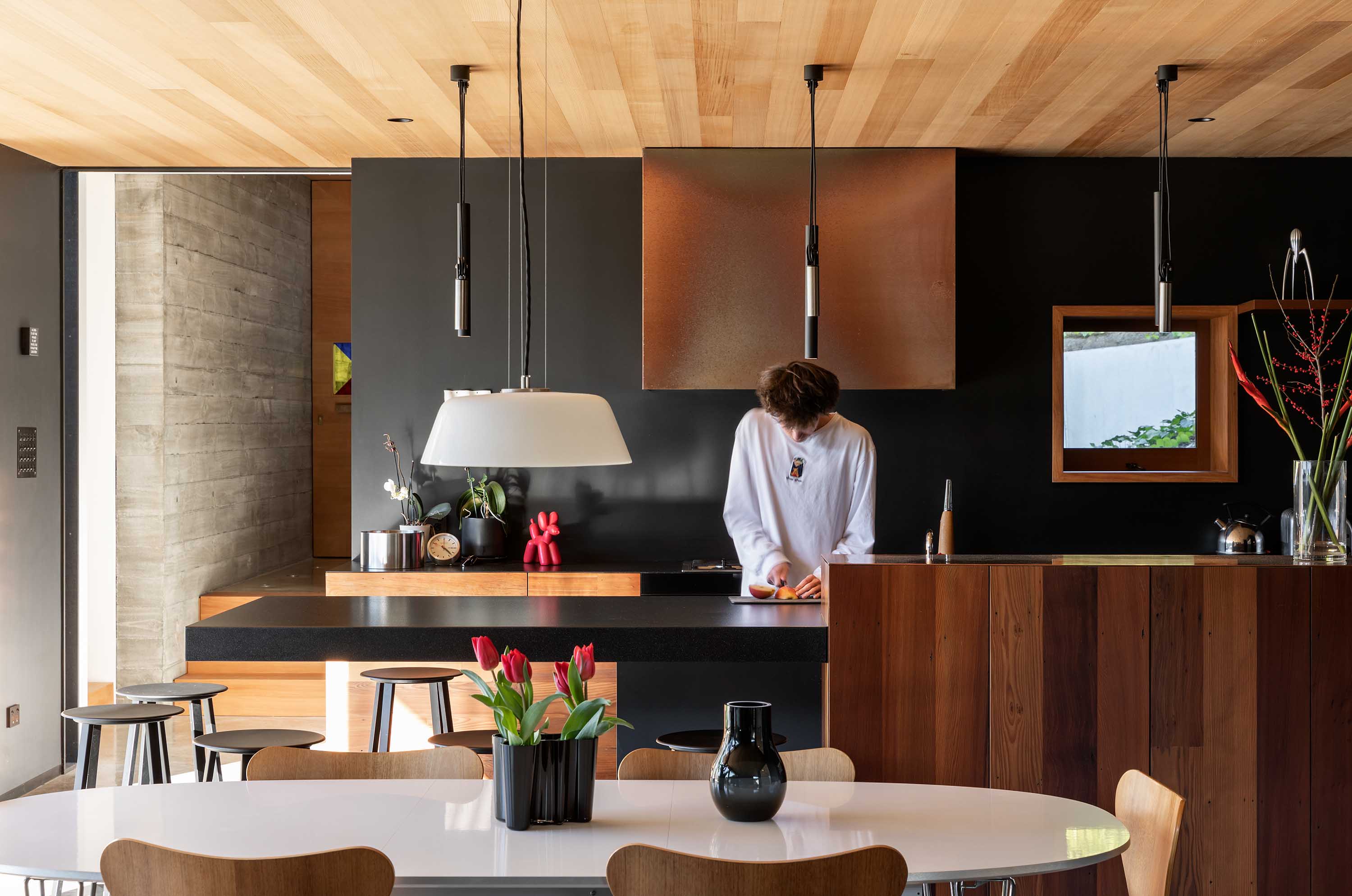 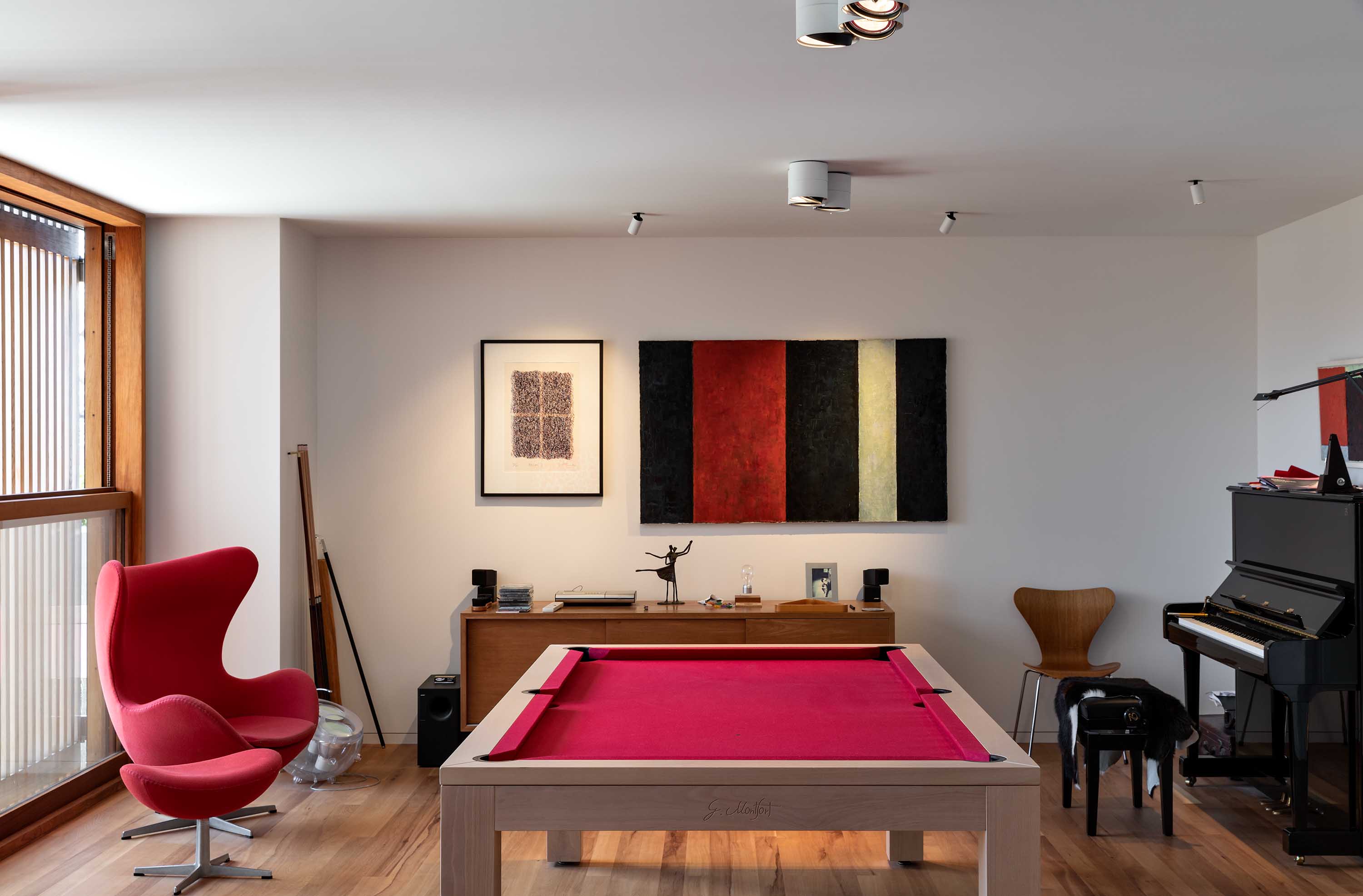 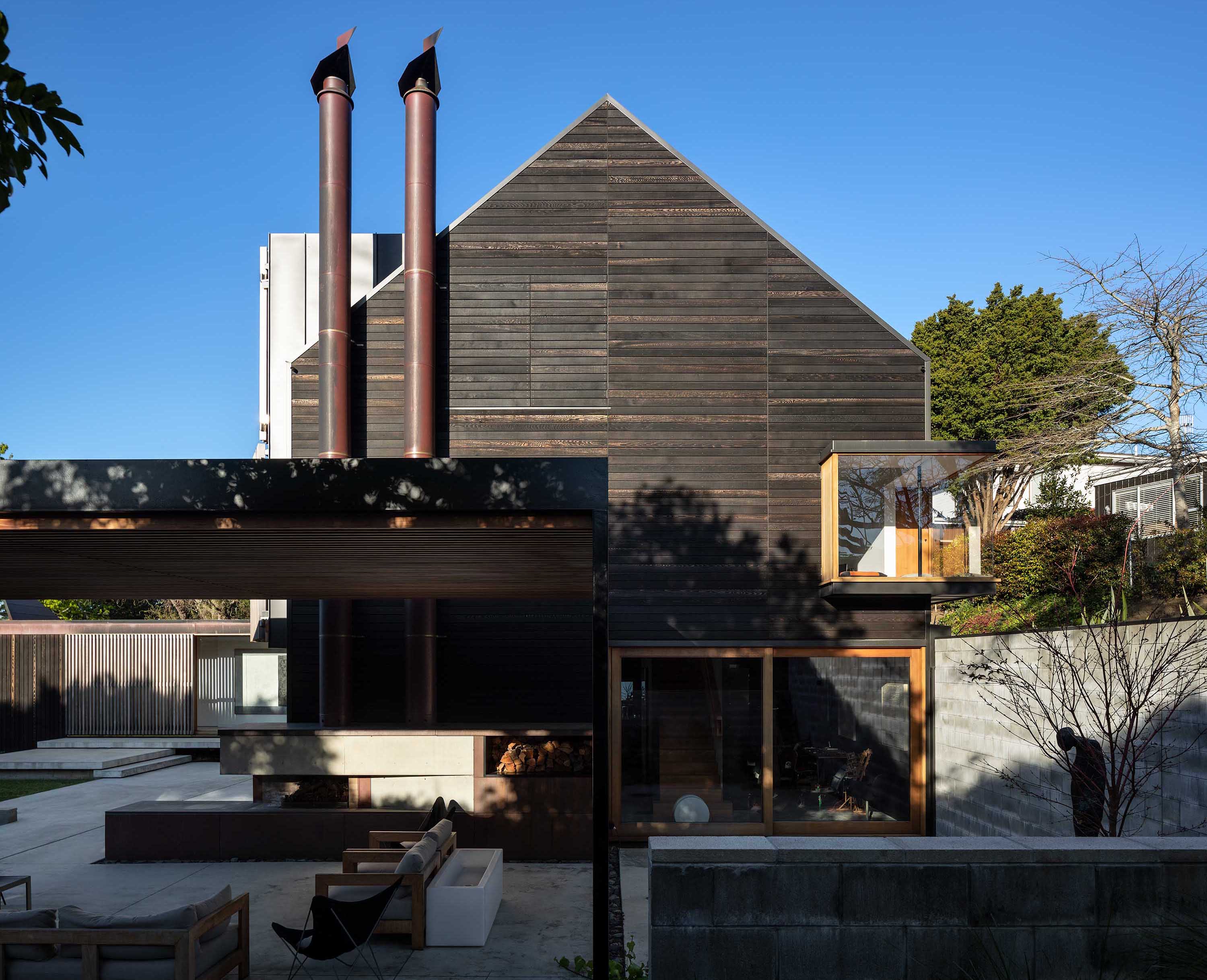 Leaving the crafted entrance, you enter the warm heart of the home. The kitchen and living area is a richly textured space where natural materials provide a backdrop for art, objects and books – meaningful pieces bought over the years, each finding a home here. This includes cabinetry made with timber salvaged from the old house, displaying pieces by Philippe Starck and Georg Jensen collected years ago.

Connection to the old house is made tangible by respecting its footprint and taking on its memory in form and materials. From the dining area, matai-lined stairs leading to the next storey are positioned in the same place as the old stairwell. The second level contains the guest bedroom and bathroom, a family lounge and Deb’s study, aka Cruz’s Control Tower.

Here, in this gallery-like family area, Clarke has delighted in the details. The timber flooring is an inversion of the timber ceiling below, and the floor level and ceiling height are reminiscent of the old home. Double-hung windows, weighted with lead-filled stainless-steel tubes, open to create a balustrade and engagement with the outdoors. The timber shutter screens, less architectural and more agricultural in their finish, filter light and air. The boys occupy the third level, the roof space, an embracing, private retreat in the tree tops.

Back at ground level, the outdoor pavilion is an expansive retreat that’s tucked into the site, protected from the south-westerly. It’s a place of long lunches and dinners, and discussions that go late into the night. The pool – in the same spot as it always was – sits below this area so that two generations can entertain their friends. The ultimate teenage entrance slinks around the back of the pavilion and into the pool area.

Clarke is an exuberant personality and his home is a place of expression, but also one of balance, harmony – and a whole lot of love. “Everyone loves to be here, and it’s a joy to be here,” says Clarke. “Good architecture gives everyone a place, and places to come together. It has been wonderful to reinstate something that remembers what was here, the essence of its form celebrates how we live now, but stores all the things we cherish.”

Moving in was very much like coming home. “Apart from the pool table and a sofa, we had everything we needed and just slipped back in. I feel really connected with the land and house – I know every detail intimately.” 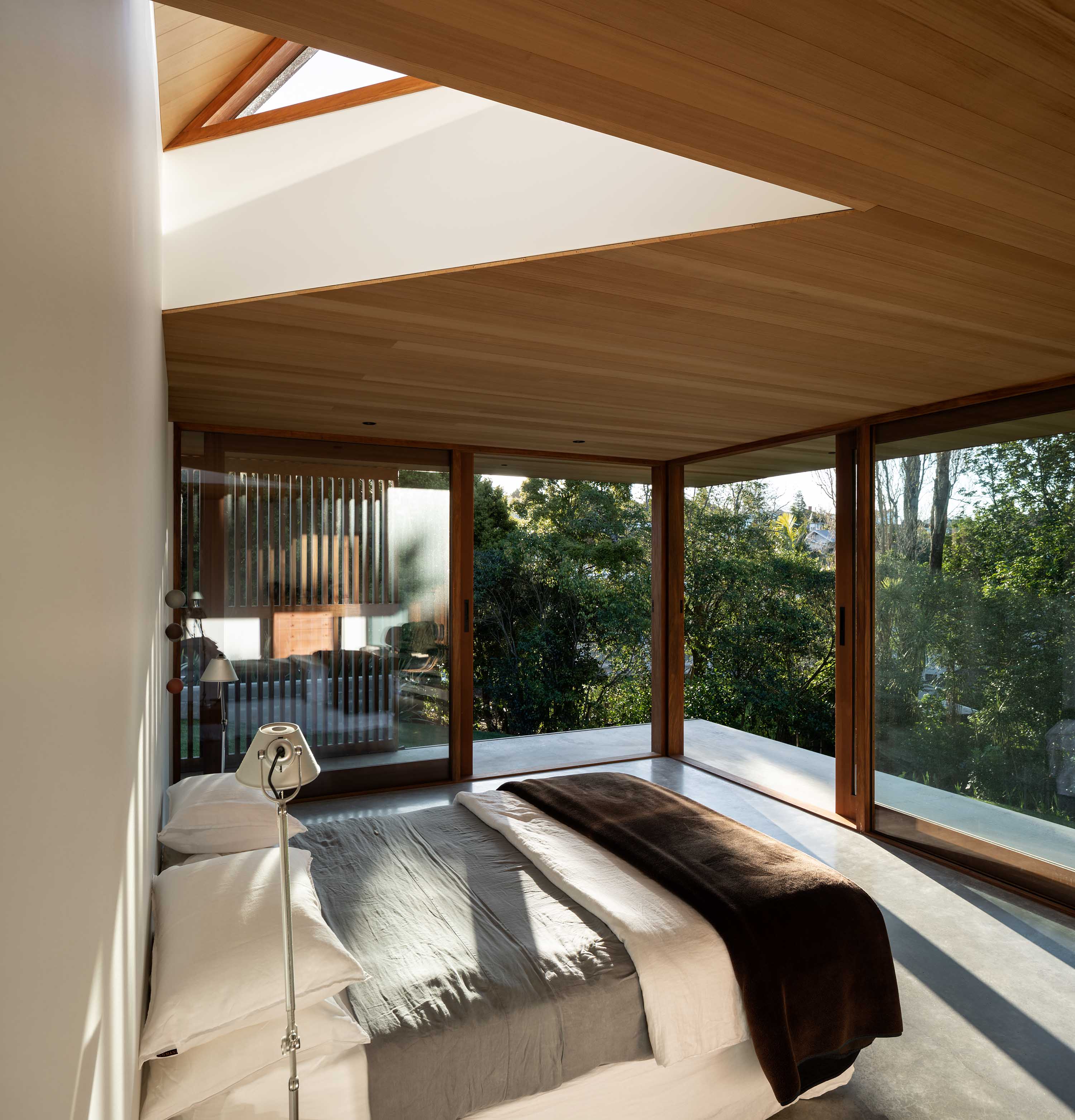 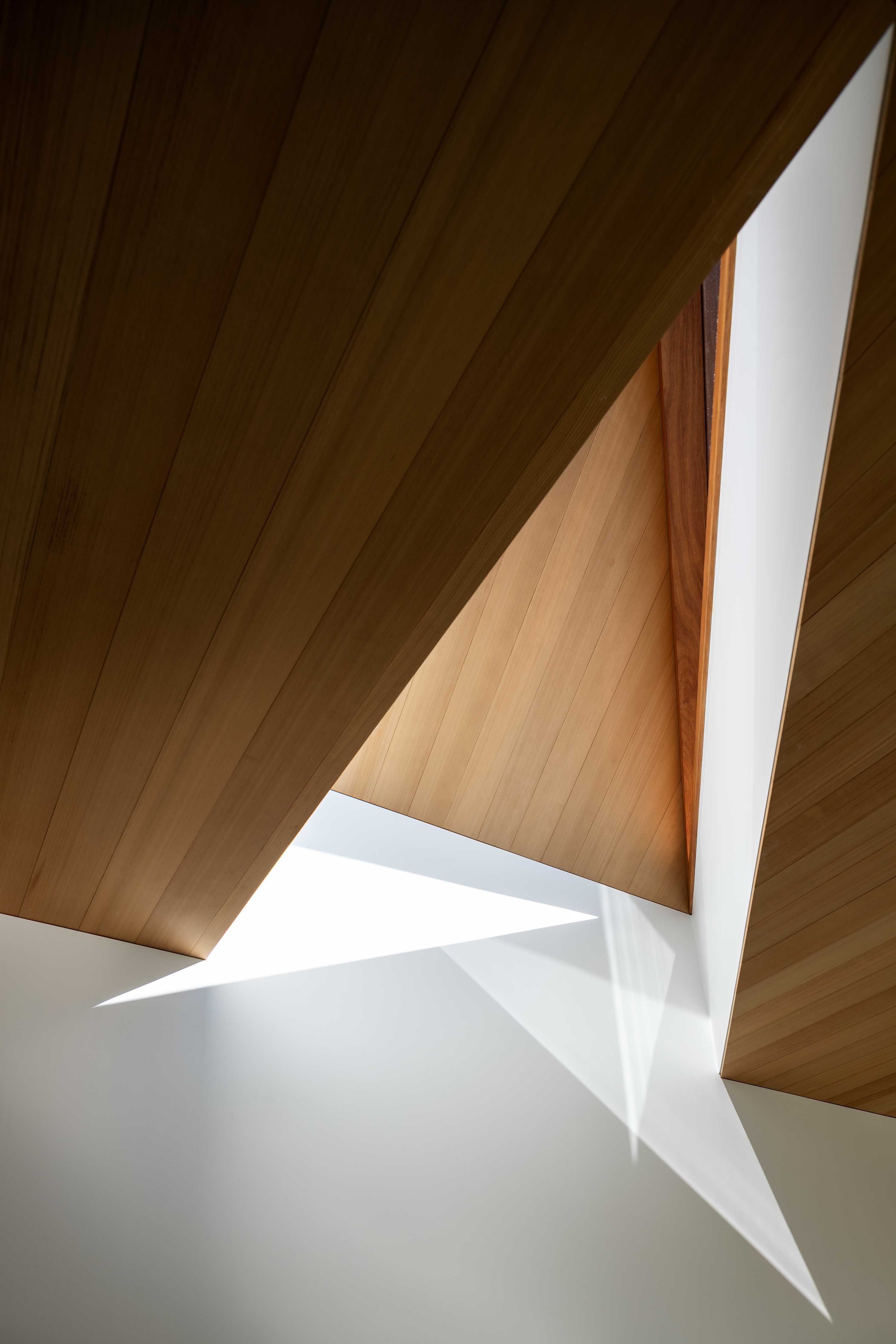 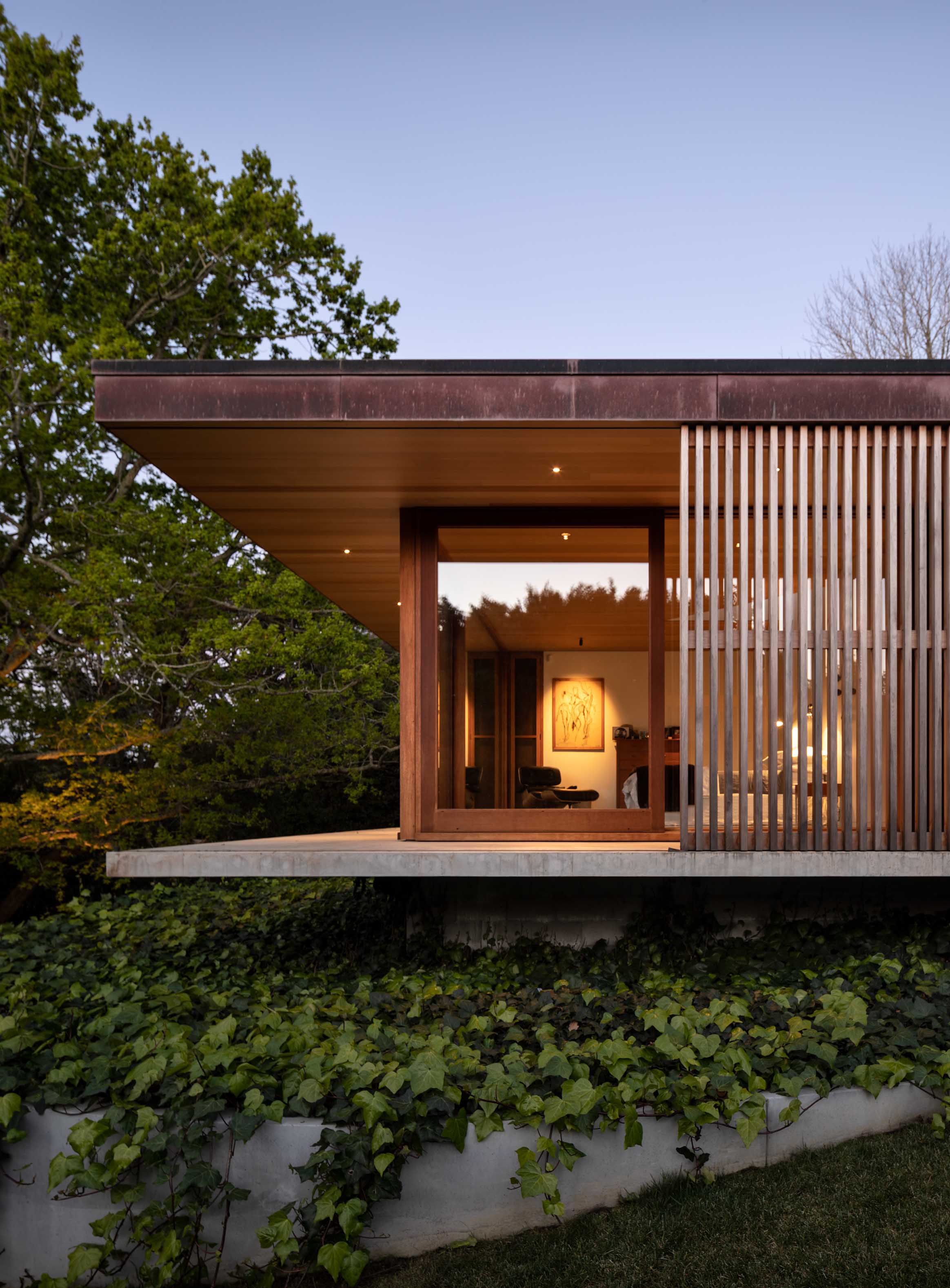 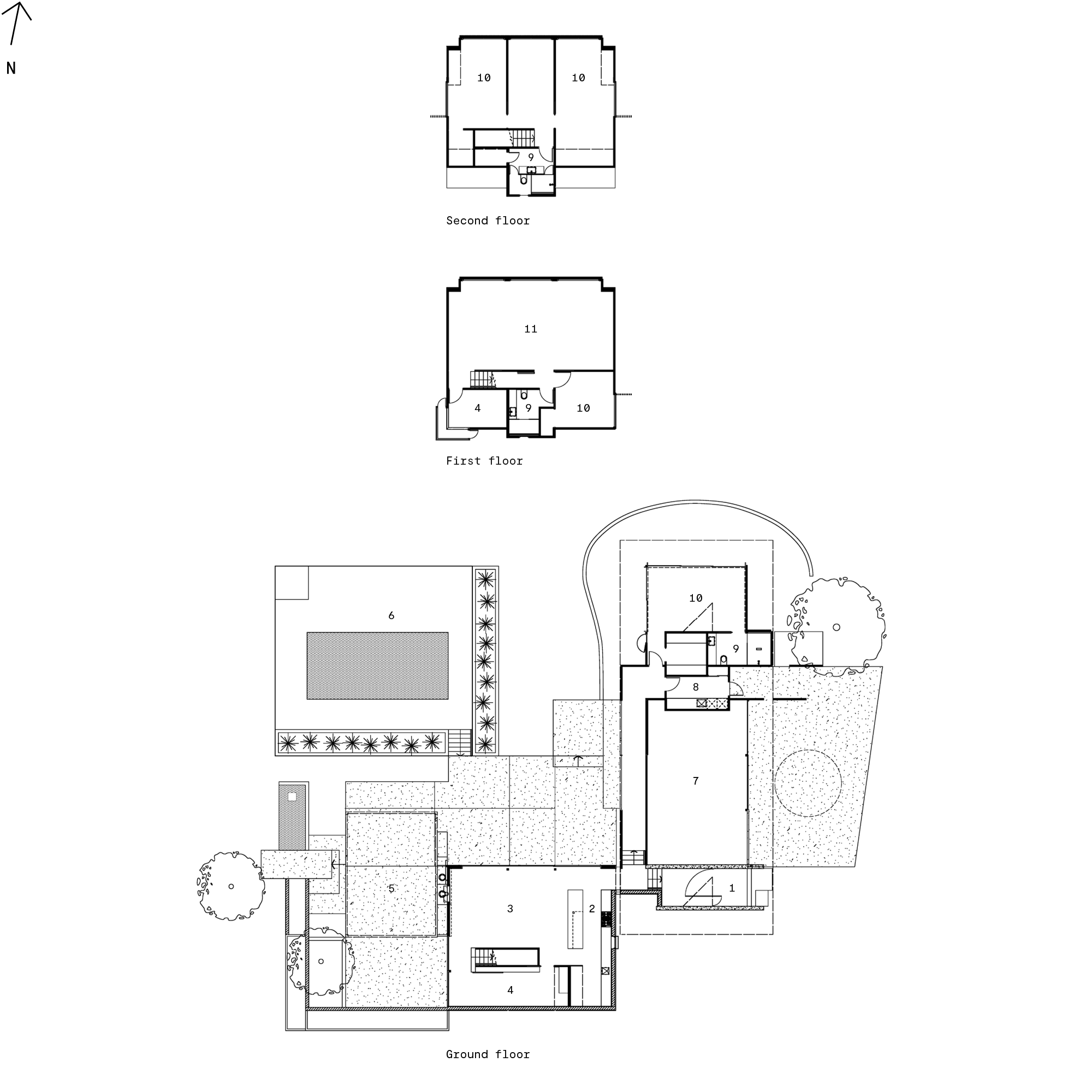 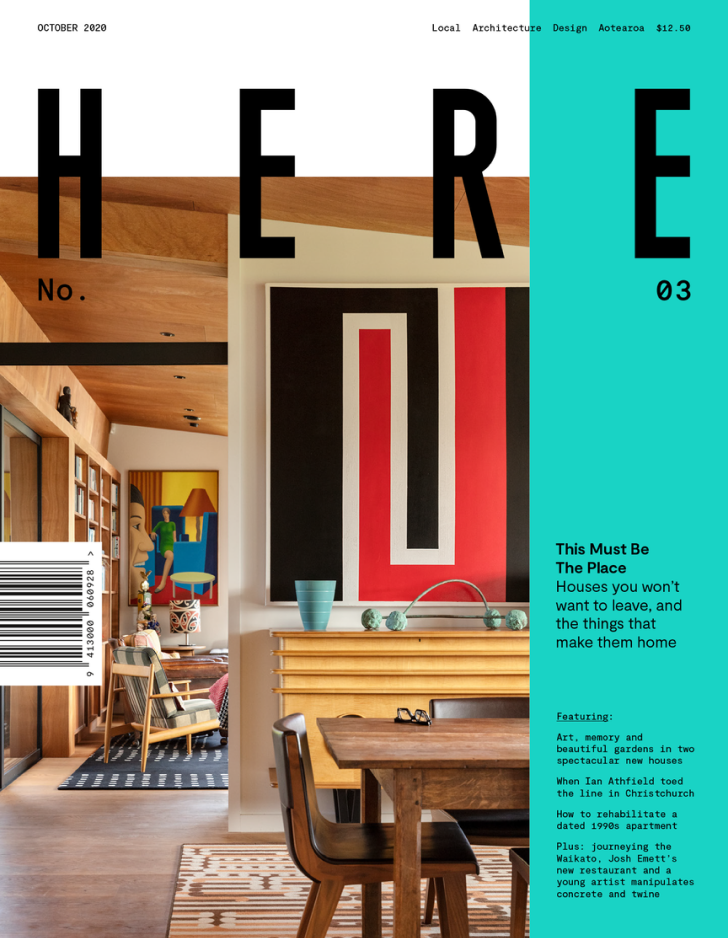