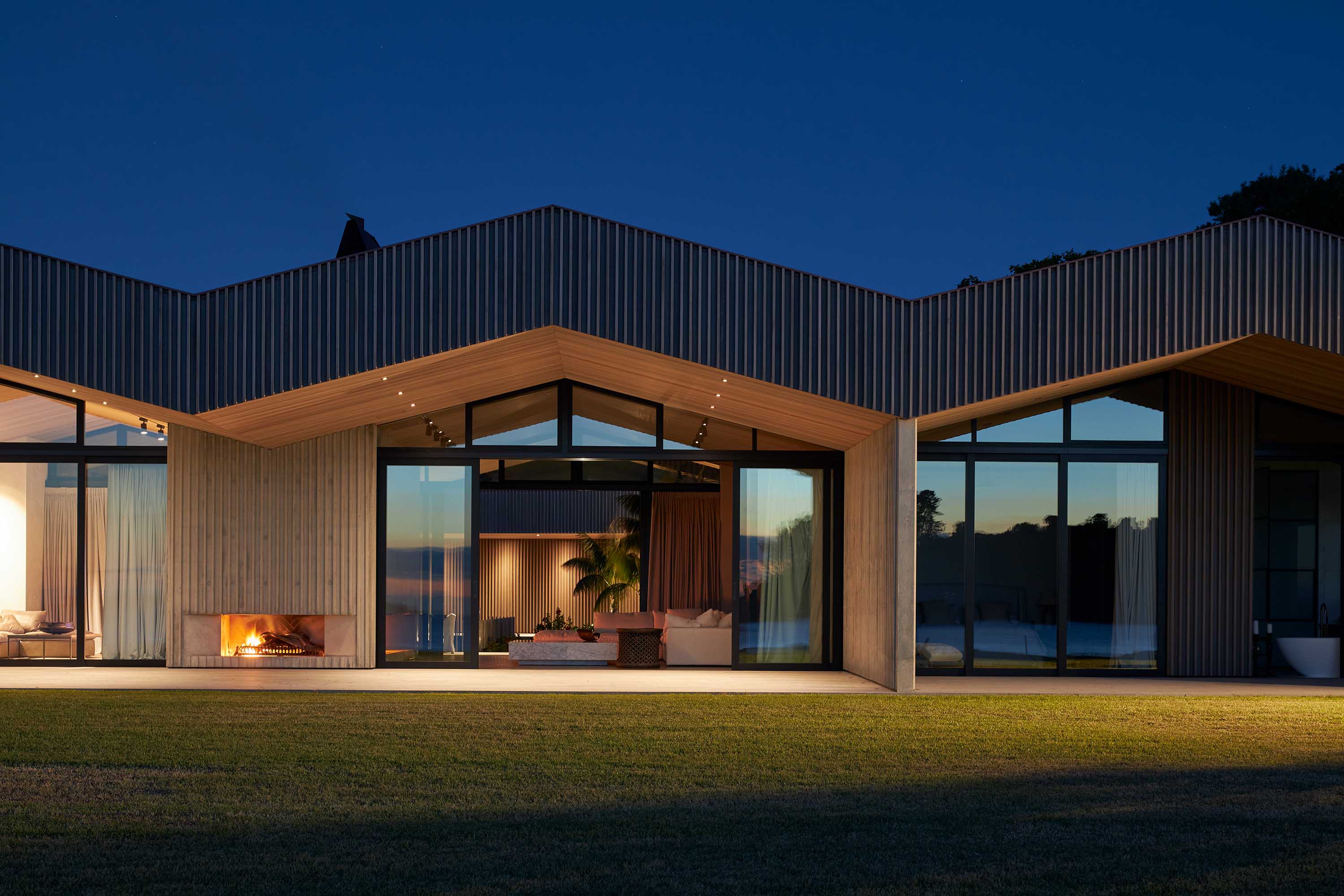 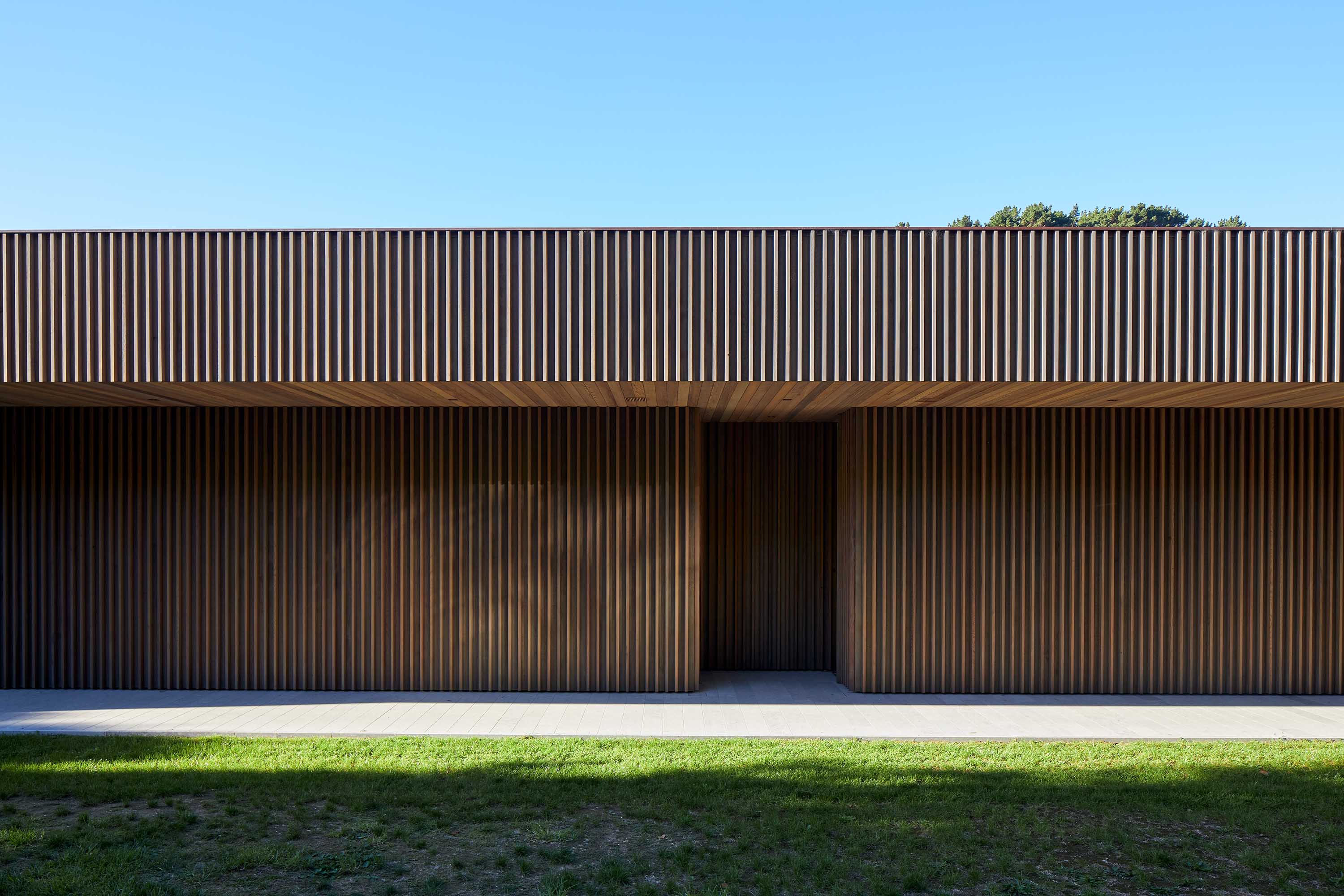 To listen to Charlotte Ryan's Spotify playlist inspired by this house, click here. It’s a familiar conundrum, though not many get to resolve it in quite the same fashion as this. The family holidays together when the kids are small, and then they grow up and have their own children, and they also want to bring their friends, and their friends maybe have kids too, and somehow, without meaning to, you’re entertaining a crowd. Quite a large crowd. And at that point, beds and space aside, as architect Andrew Patterson puts it, “you’re somehow always welcoming or farewelling someone”.

Traditionally, the solution to this in Aotearoa is a compound of sorts – tents, caravans, garages, sleepouts that allow a house to expand and contract. For the multi-generational family who own this house on Waiheke Island, the idea of an extended compound holds. As Patterson puts it: “It’s a bit like a holiday resort where you’ve got your own bure, but here it’s one house with a common living space.” You can ignore everyone and go for a nap, or you can come out to see people, and often that’s by the swimming pool.

It’s a beautiful spot – a large flat expanse of land beside a white-sand beach with a collection of historic boatsheds to one side – but a complicated one. Far from
being a private beach, there are houses on the hillside next to it, and a new development up the hill at the rear. When the owners bought the site, there was a two-storeyed 1980s monster whose only redeeming feature was its proximity to the high-tide mark – closer than you’d be allowed to build today.

Early on, Patterson was struck by a photograph of the land from the 1920s. Back then it was wilderness, a series of sand dunes with a small estuary running behind it. That was all long gone – the estuary drained and the dunes flattened into pasture – by the time he was commissioned, but for one thing: the prevailing westerly wind that had pushed up that sand over eons. “It has a sort of unusual ‘Gulf Stream’ going on,” he says. “It’s not cold but it can be exposed, its own little ecosystem. So we needed to do a double-sided house because some days you just can’t sit out on the beachfront.”

Patterson’s design is elegant and concise, despite its size (“It’s a big house,” he says, “really big”), arranged in a sort of cranked U-shape where the right arm of the U is longer and at a slight angle to the other. Along the seafront, with glass doors either side, there’s a living room and main bedroom for the grandparents. Along the base of the U, there’s guest accommodation. And along the rear arm, there are two self-contained suites for the family, each with three bedrooms and a bunkroom. In the courtyard, there’s a swimming pool and communal areas, with a view through the main pavilion and out to sea. 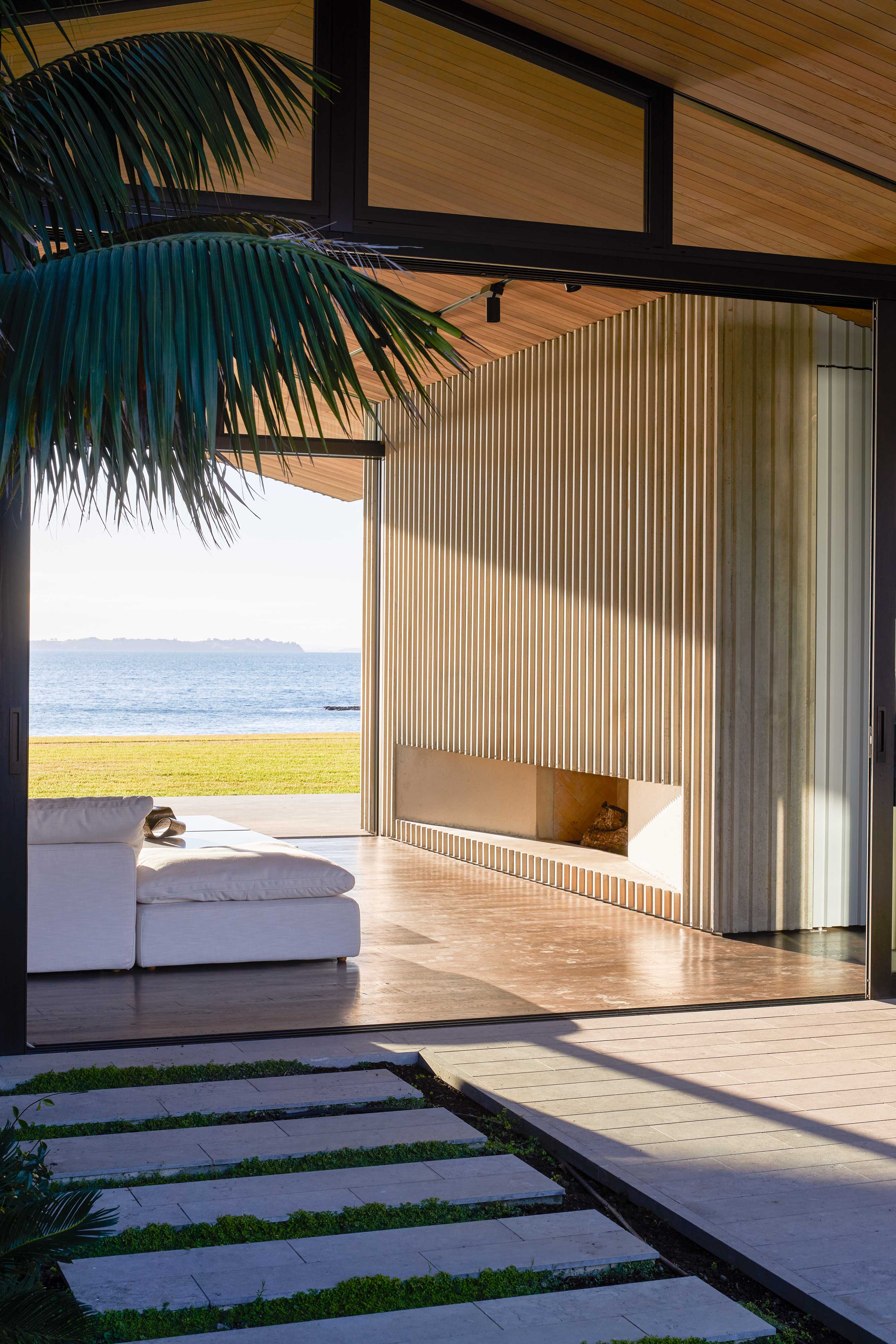 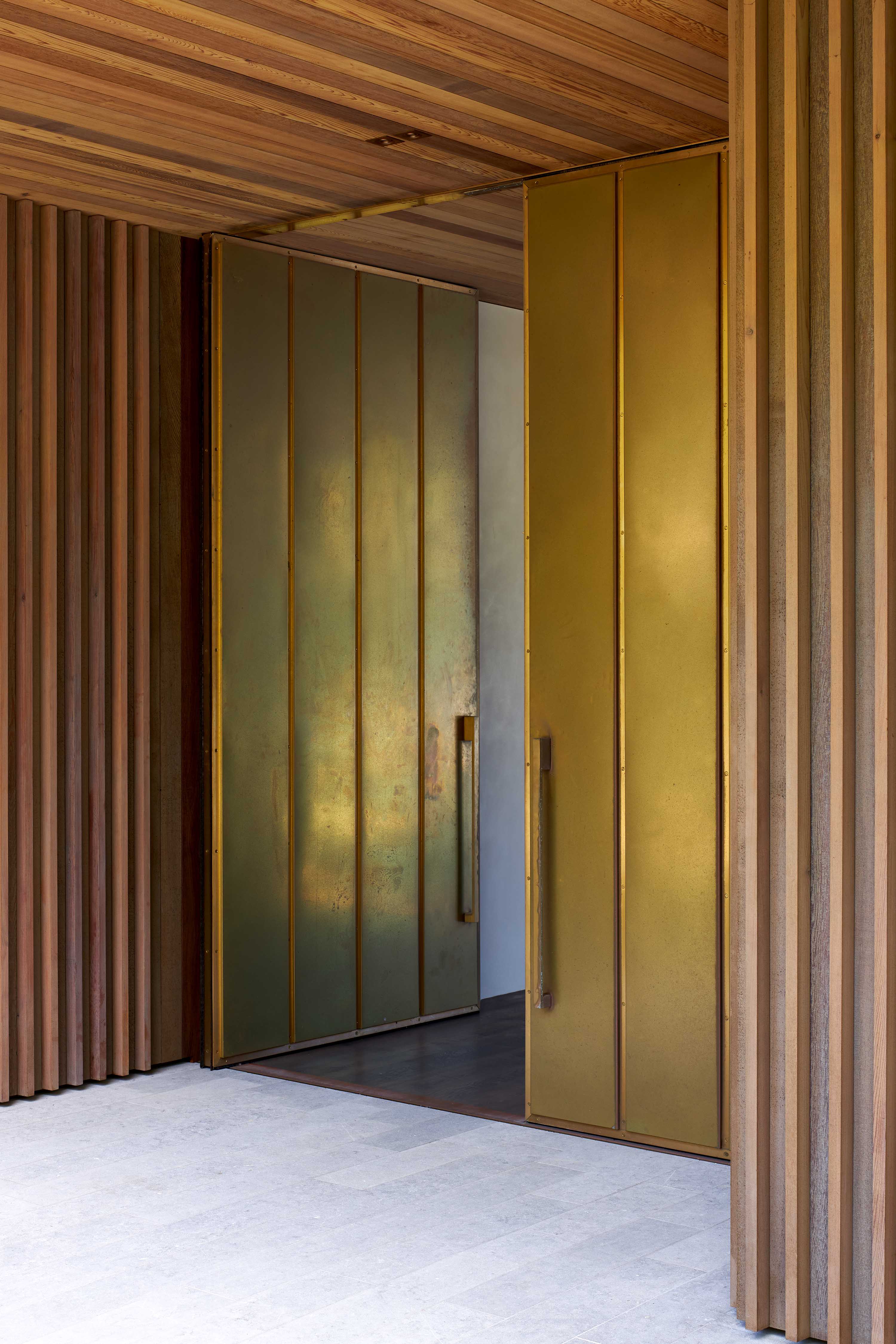 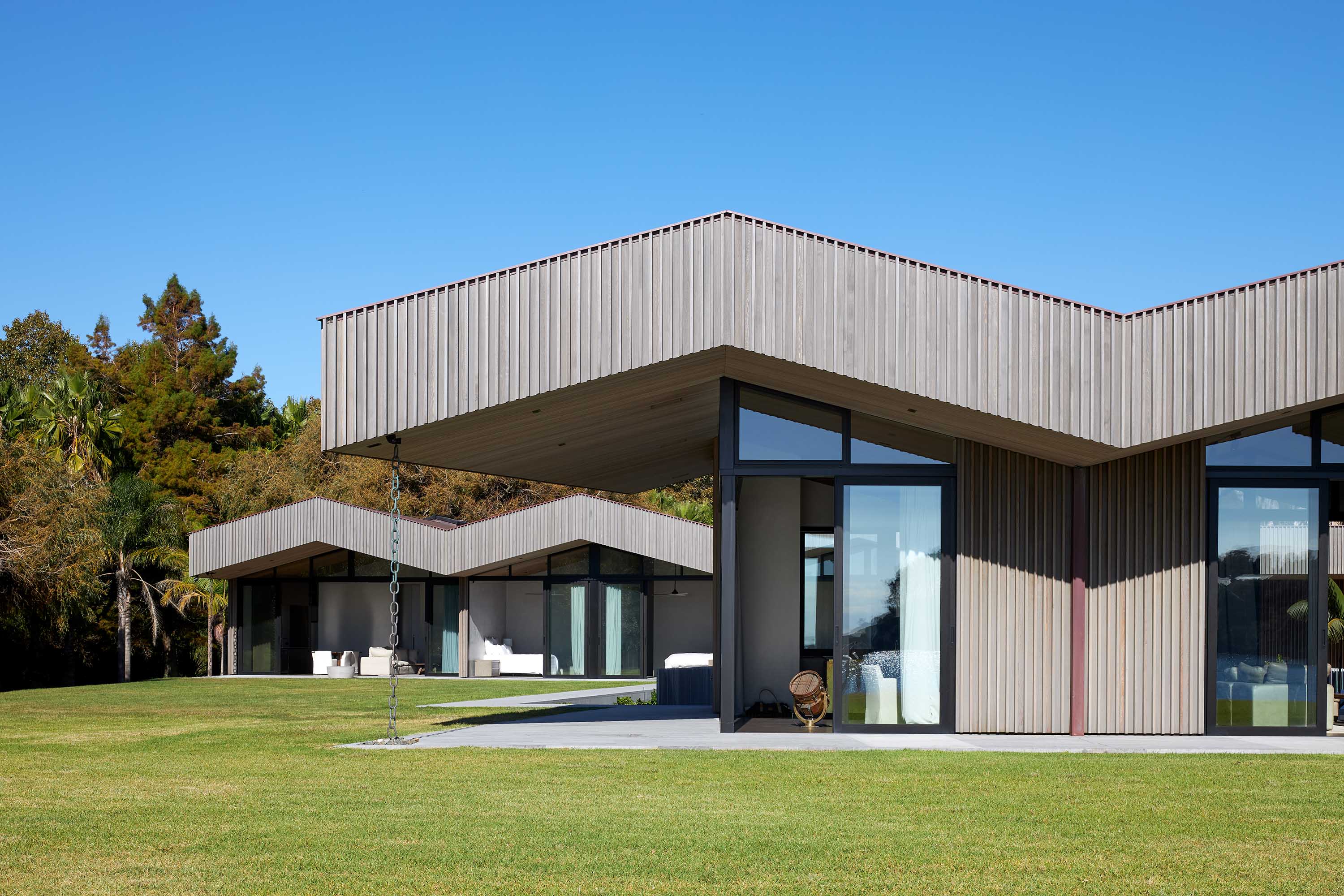 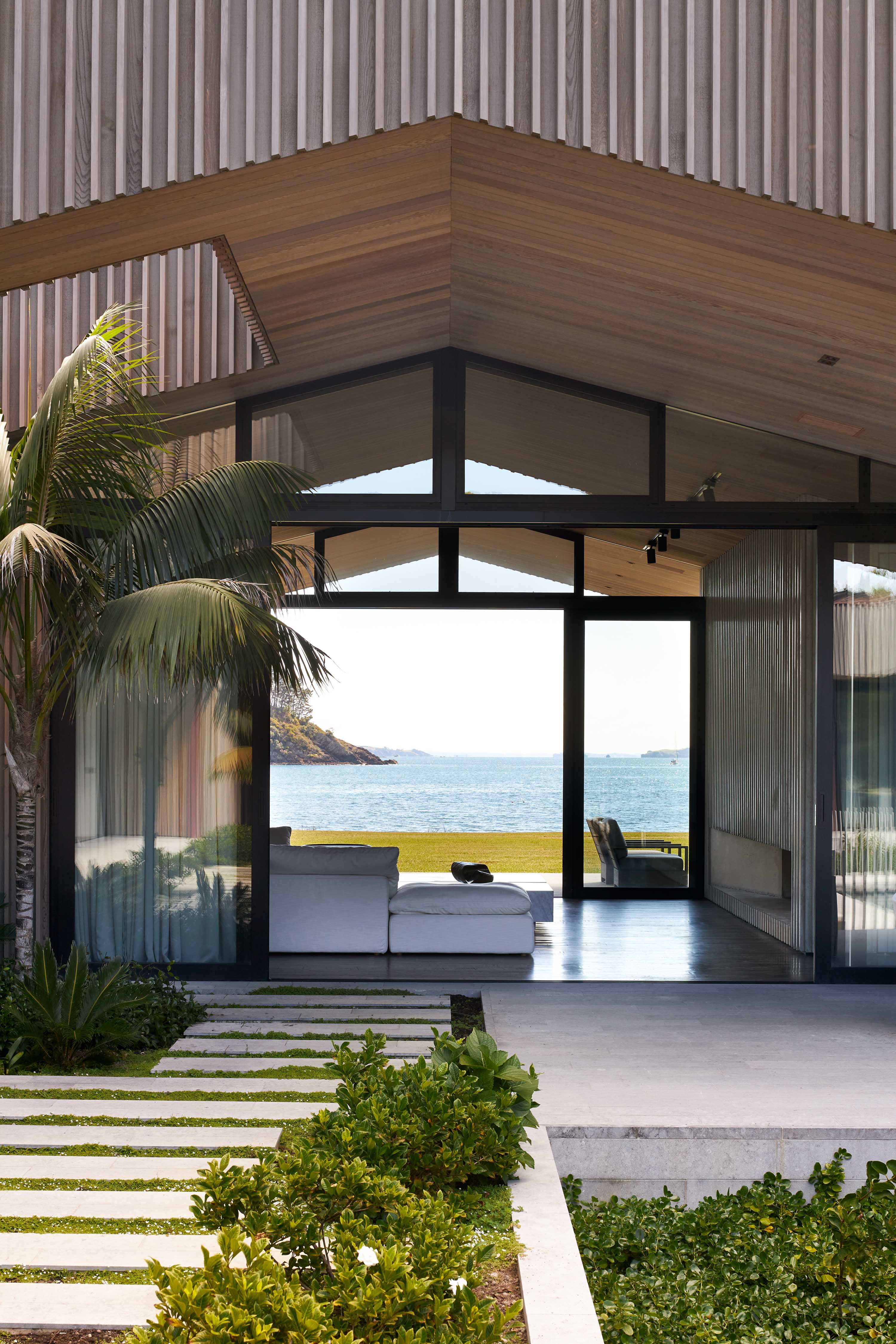 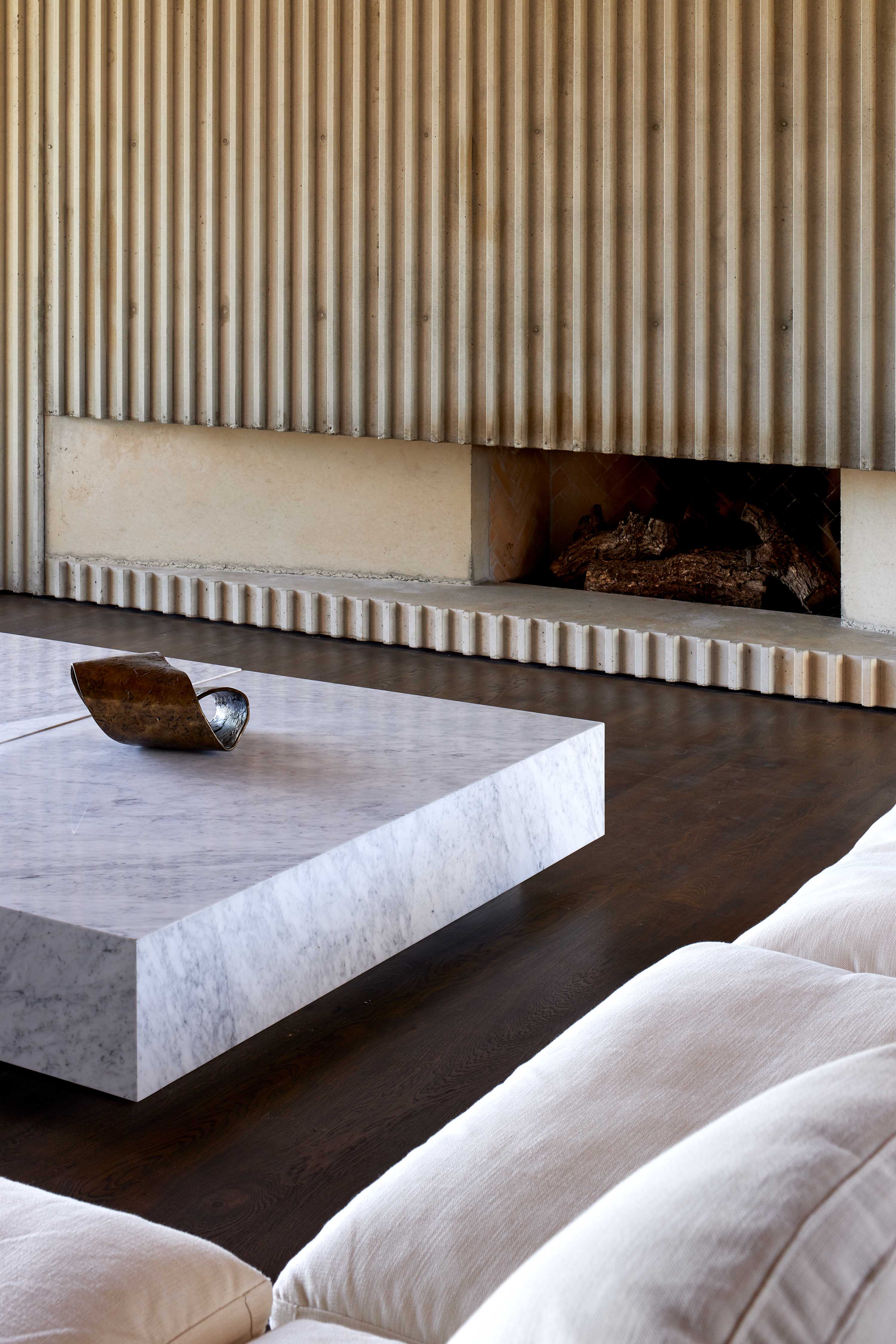 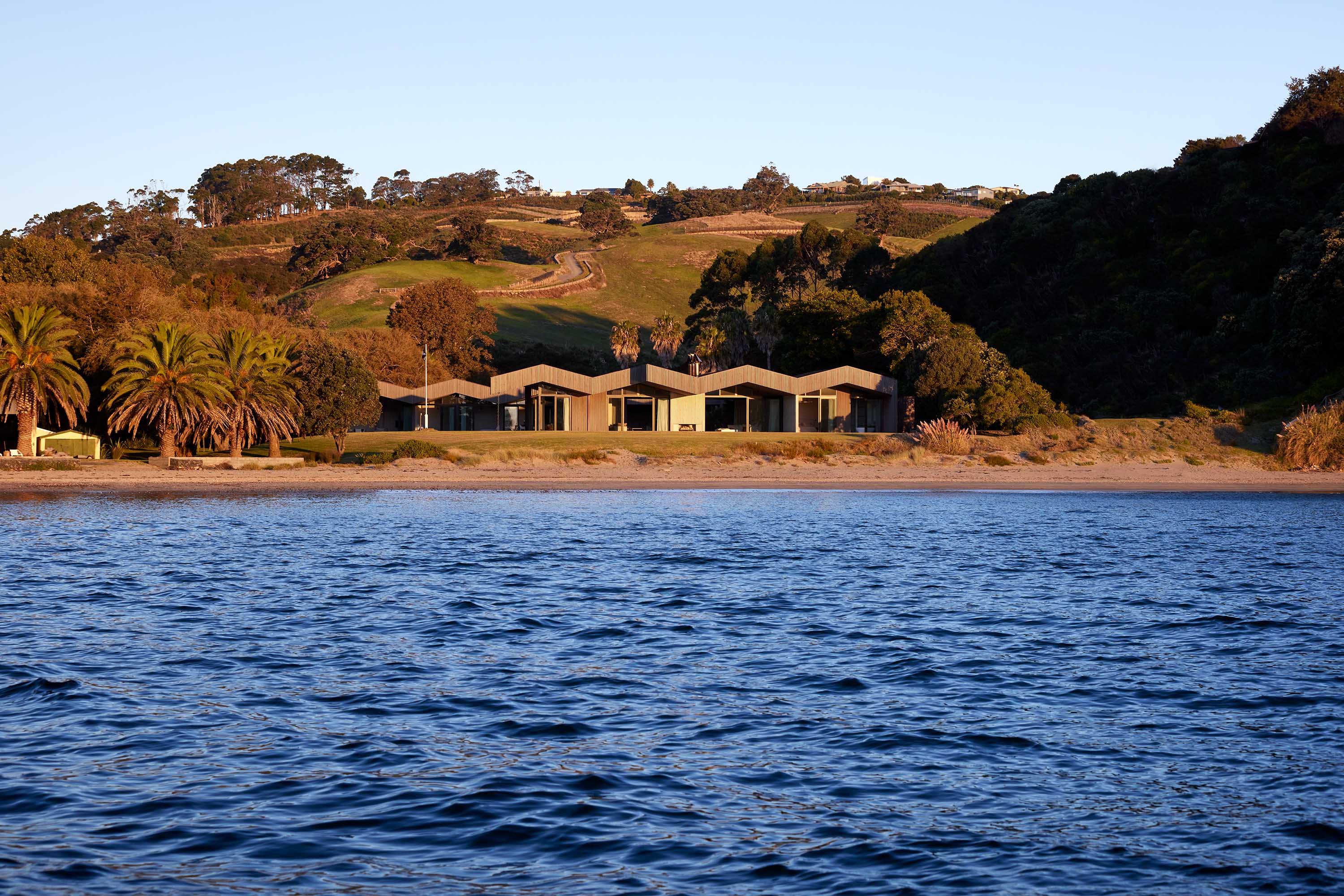 The resort approach is more than just an organising idea – it’s part of how the house feels and operates. There’s an ease to the place, even a looseness. You approach the house down a long, sinewy driveway, and the first thing you see is a solid concrete wall, with a glimpse of the pool and courtyard behind. There’s a formal entry into the main pavilion, at the base of the U through beautiful brass doors, but day-to-day, most people just wander casually into the courtyard.

The house is porous and quite thin, which gives almost every room two connections to the outside, with spots to retreat to depending on the sun and breeze. There are shower courtyards located off ensuite bathrooms, and multiple ways through and around the house, some covered and some not. Bedrooms run atop the courtyard, with billowy curtains for privacy, set back behind the deep verandah. It’s a sociable, romantic space.

The challenge was finding a unifying aspect. “There are a lot of big houses on Waiheke,” Patterson says. “Sometimes they just seem to be conglomerations of small houses pushed together. We’ve tried to make the building one sculptural thing.”

He found inspiration in the boatsheds nearby. It’s an oft-referenced form but one that generally creates the kind of conglomerative effect he describes. Here, it’s more abstracted: a large roof clad in cedar battens zig-zags around the building, tying its various components together. It’s monumental in scale, a reduced idea played out large. “It’s just a steel frame and a repeating construction detail, so you can get a big house built easily,” he says.

The size of it doesn’t bother Patterson, who muses that in the future, the place could easily transition to a hotel or even a restaurant. “It’s easier to make a house feel more intimate,” he says. “It’s a bit harder to make it feel spacious.”

Originally, the design featured a series of screens at the front, extensions of the timber battens that run along and around the facade and give it such rhythm and texture. But once the building started to go up, Patterson and project lead Richard Andrews realised they would be distracting. “We made the decision quite late to just go for a big sculptural form,” says Patterson.

In a sense, the bigger the house, the fewer details it needs, but the more muscular and textural they become. In essence, the house is reduced down to the battened roof and concrete in-situ walls, featuring a matching batten, which are carried from the outside in. The floors are dark timber, and where the battens aren’t brought inside, the walls are pale plaster. It’s a refined palette. The living areas are dominated by a monumental three-sided fireplace; two sides face into the living areas, the other out to the front terrace. “It’s difficult to get a scale of the place from photographs,” says Andrews. The transom above the doors, for instance, sits at a lofty 3.2 metres instead of the standard 2.4; the key to its elegance is in its composition.

The other key is a thousand concealed details. Those cedar battens are an over-batten, hiding the fixings behind. Doors are hidden in walls of timber battens and even the gate for the swimming pool disappears into a line of steel pickets. “It’s masculine but not overly confronting,” says Andrews, who worked closely with builder Kevin Glamuzina to hide the mechanics behind the magic. “We didn’t want any distractions – that’s the theatre of it, and for me that’s the power of it.”

Despite its size and its level of detail, there’s not much that is shiny or overtly luxe here. There’s no automation. Bathrooms feature black steel cabinetry and marble tiles that will weather and age. Even the brass touches in the kitchen will develop character through use. “It’s a simple house,” says Patterson, “which we hope will feel like it belongs there for generations to come.” 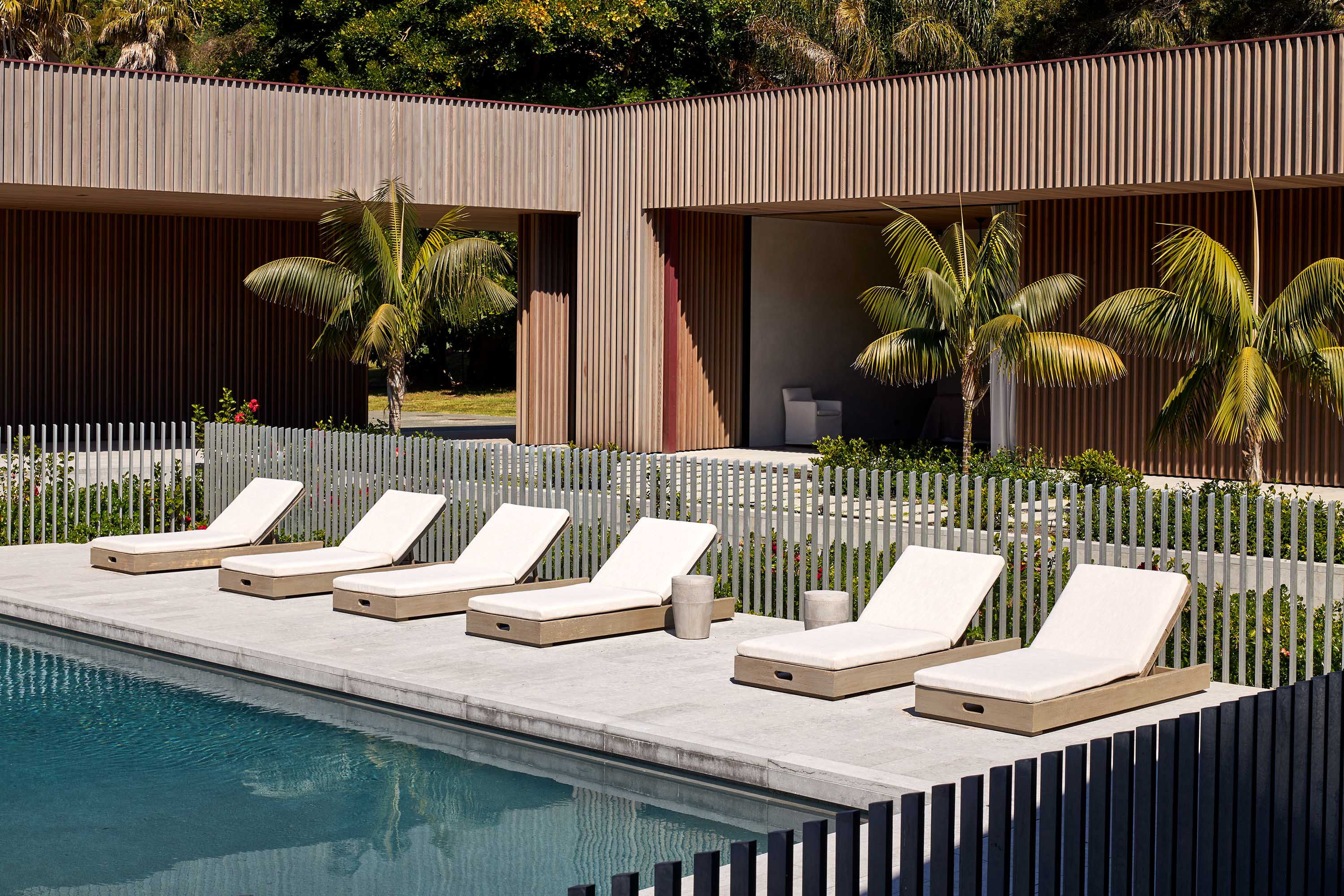 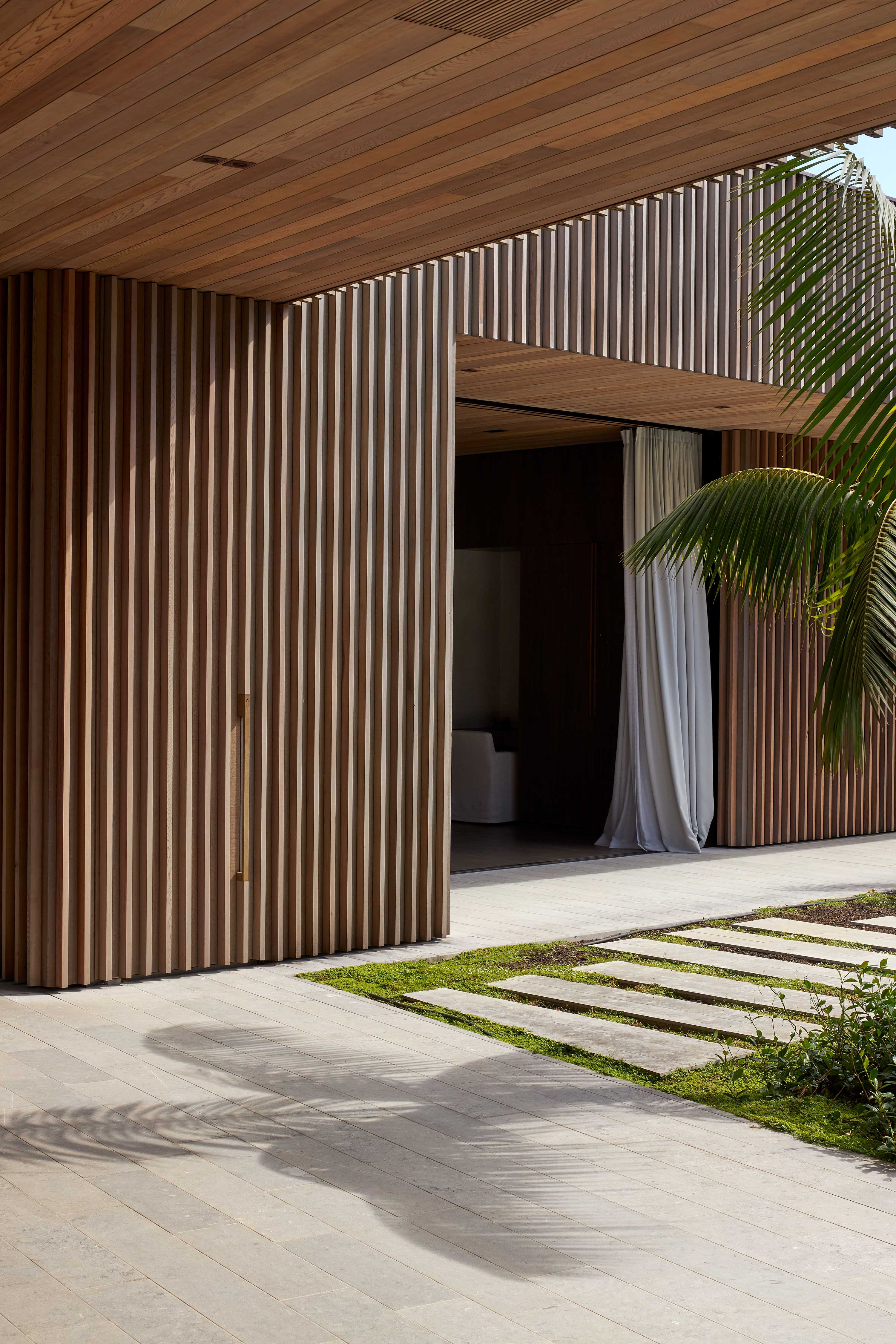 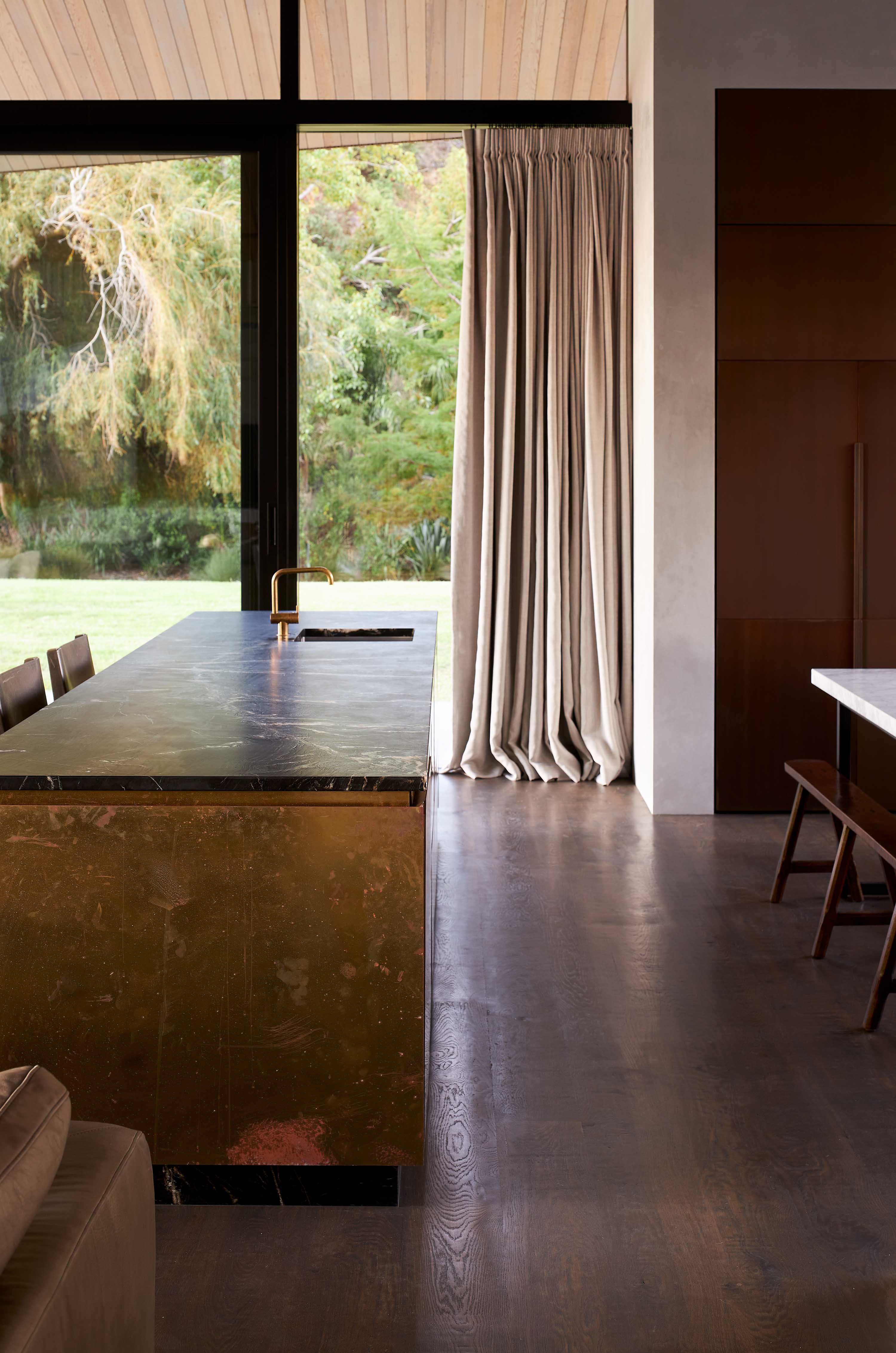 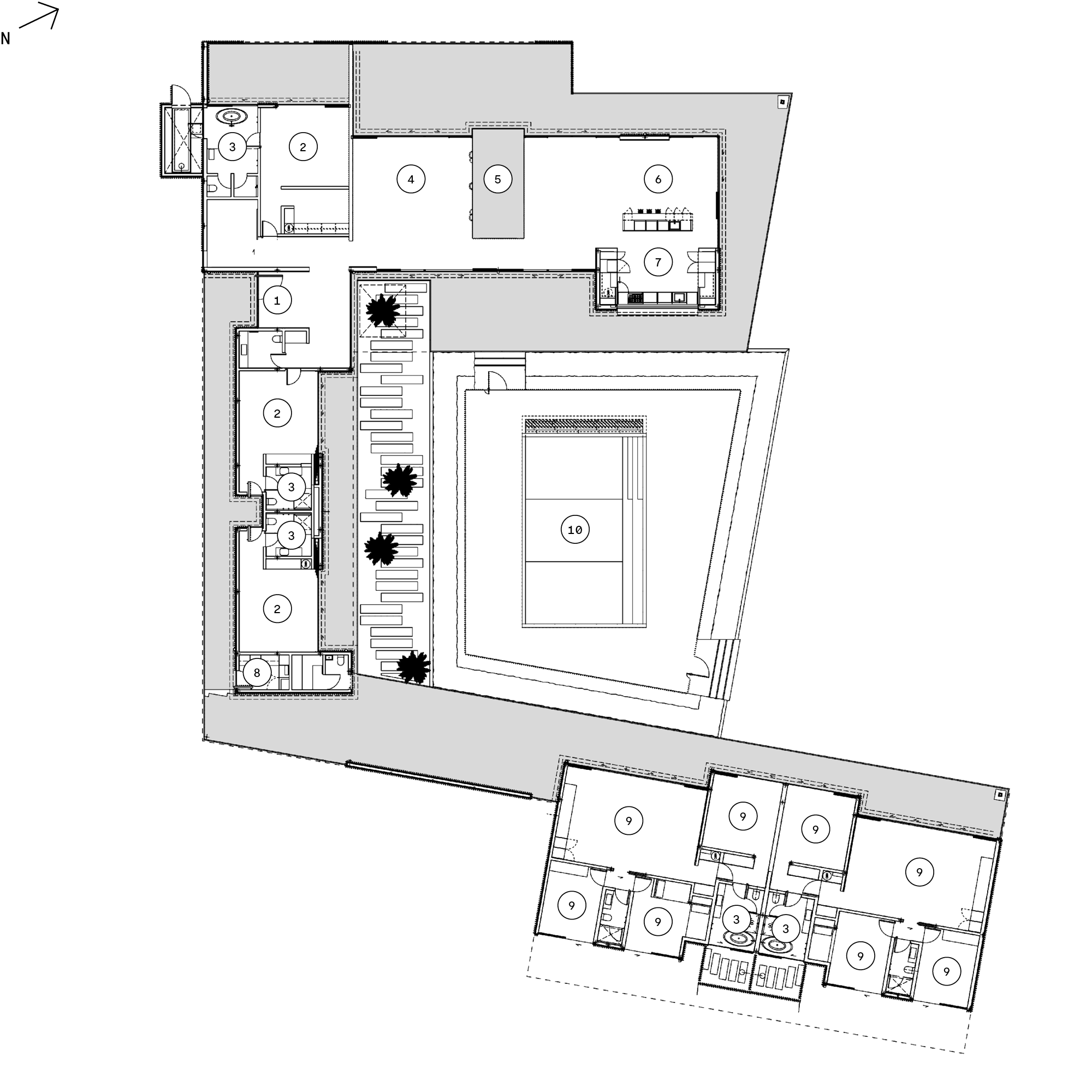 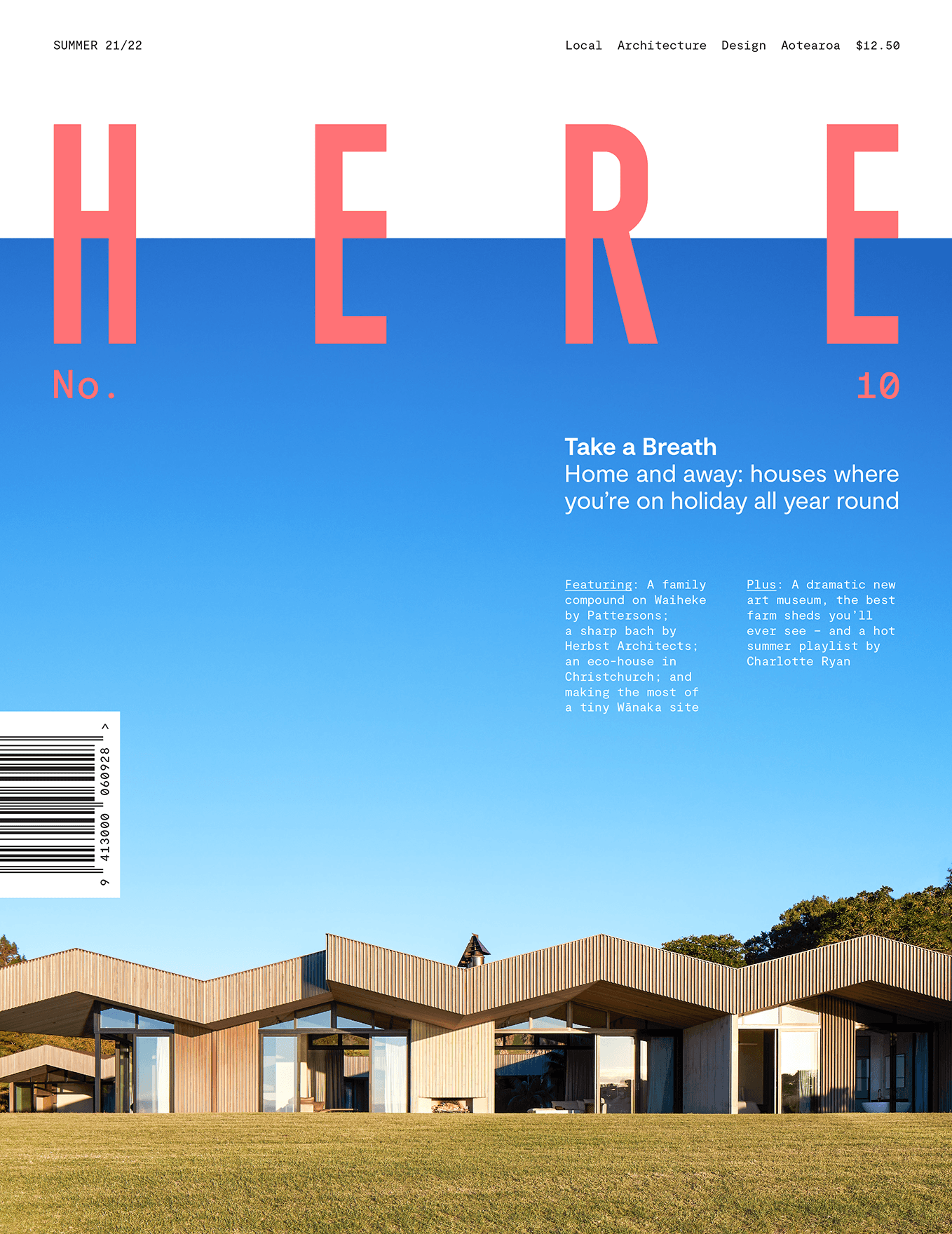