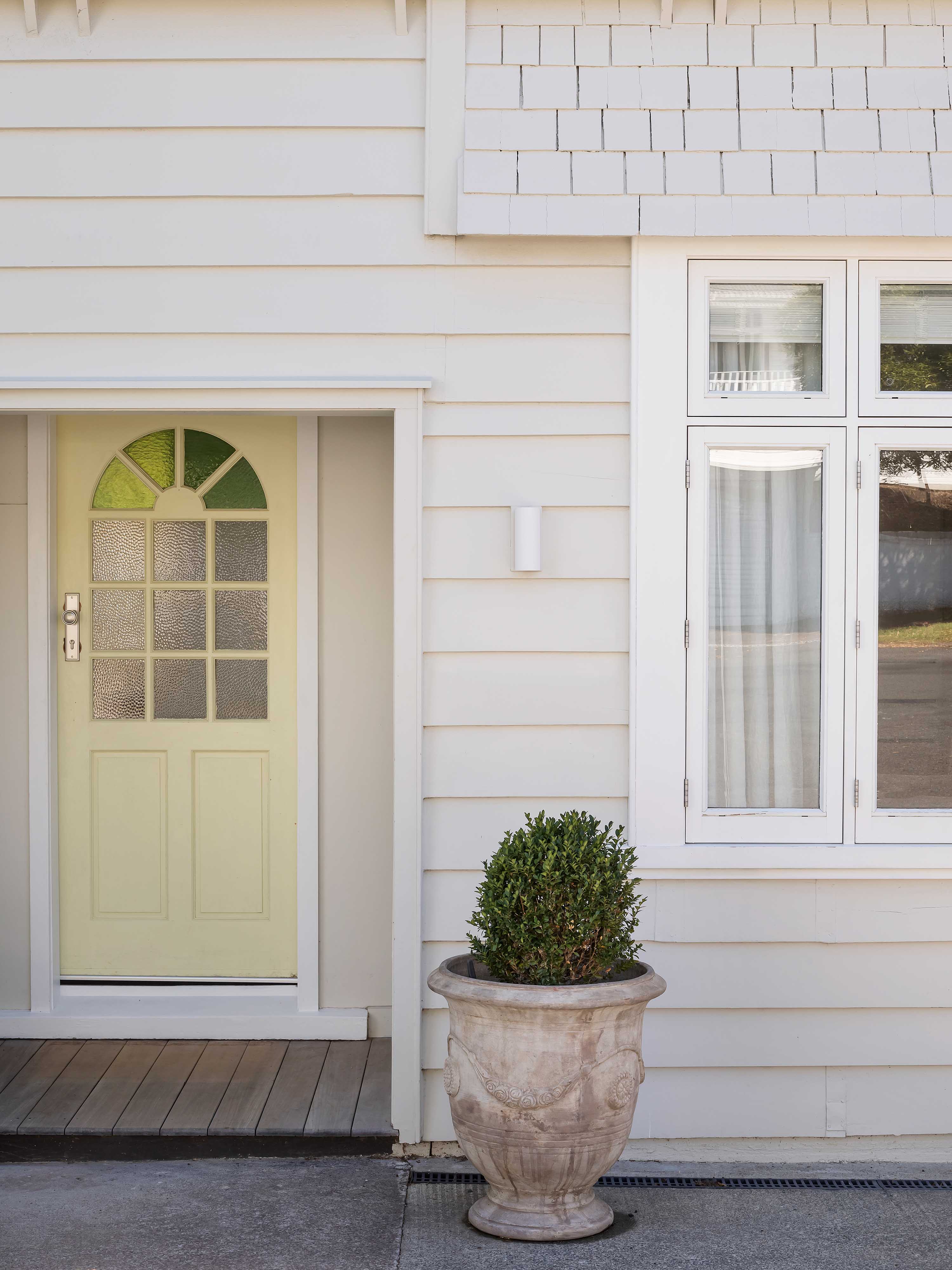 Every home has stories in its walls, but this character bungalow on a Grey Lynn ridge contained them literally. The Auckland Star, February 28, 1927, to be precise. When architect Adele McNab and her mum, Elaine, began to peel back the years to coax out a fresh chapter for the dwelling, they discovered a time capsule of history used as insulation: photographs of the Duke and Duchess of York’s visit to New Zealand were printed alongside notices of civic receptions and advertisements for alleviating joint pain.

Mammoth renovations aren’t a well-known balm for heartache but when Adele’s father passed away unexpectedly five years ago, leaving her mum anchorless and living on a big old farm in Whitford, a dilapidated city-fringe bungalow seemed to offer a practical and psychological way forward. The house was typical in many ways. On a narrow site, cheek by jowl with neighbours, it had suffered the ministrations of enthusiastic DIYers over the decades and exhibited the inevitable skimble-skamble of spatial planning. Upstairs there were secret, squirrely rooms; downstairs, the basement level was dark and cheerless. And yet, there was its saving grace: location of course, but also aspect. The west-facing section dropped away to a gangly three-tiered garden and a liberating outlook across suburban treetops to the Waitākere Ranges.

Elaine moved in as Adele began the process of negotiating special character overlays and simplifying the plan. “Mum lived like a hippy for a year before the building work began,” she explains. “For six months, she had no hot water.” Mother and daughter collaborated, ideas and instinct blending to transform and extend the spaces, while Adele’s brother Tristan, a former quantity surveyor, helped keep the numbers on track.

Today, the butter-yellow front door, a splash of sunshine between shingle-roofed bays, is a precursor to a sense of lightness that is immediately felt on entry. It’s gentle light, though, modulated by a sloping ceiling above the open-plan kitchen and living zone, which, along with the balcony, intensifies the leafy outlook. “A lot of people thought we should carry the gable through, but in this case, we wanted to control the strong afternoon sun and frame the view,” explains Adele.

Low-key design moves ensure the home still feels like a bungalow, only less so. The original mataī floors were stained and are mimicked in the living area, tongue-and-groove ceilings speak the same architectural language, and repurposed native sarking boards line a skylight above the central stairwell where a glass-and-timber divider ensures a delicate transparency. “The sarking boards were too beautiful to give to a recycle yard and James Thomas from Wolf Construction did such a wonderful job of it,” says Adele. 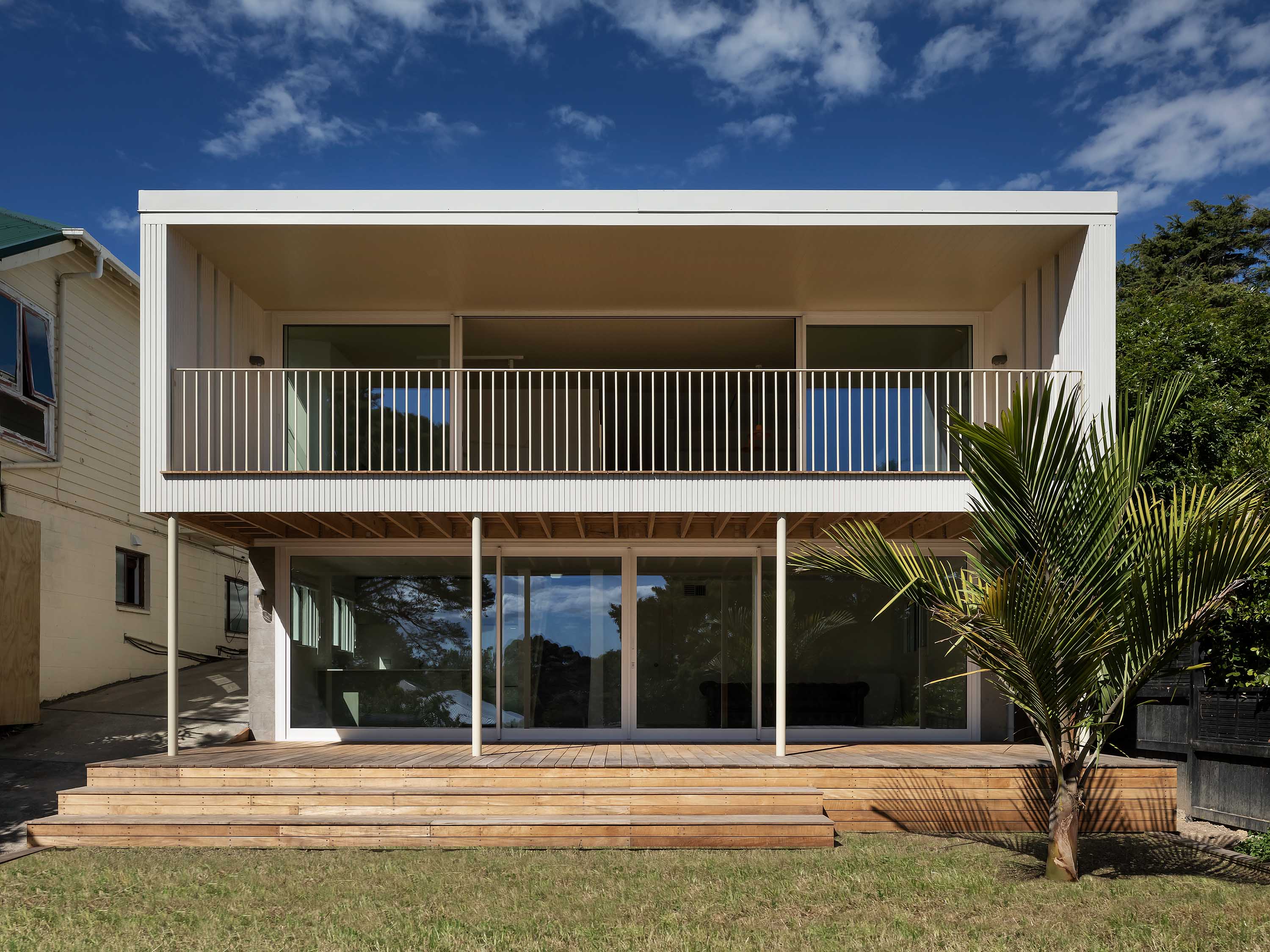 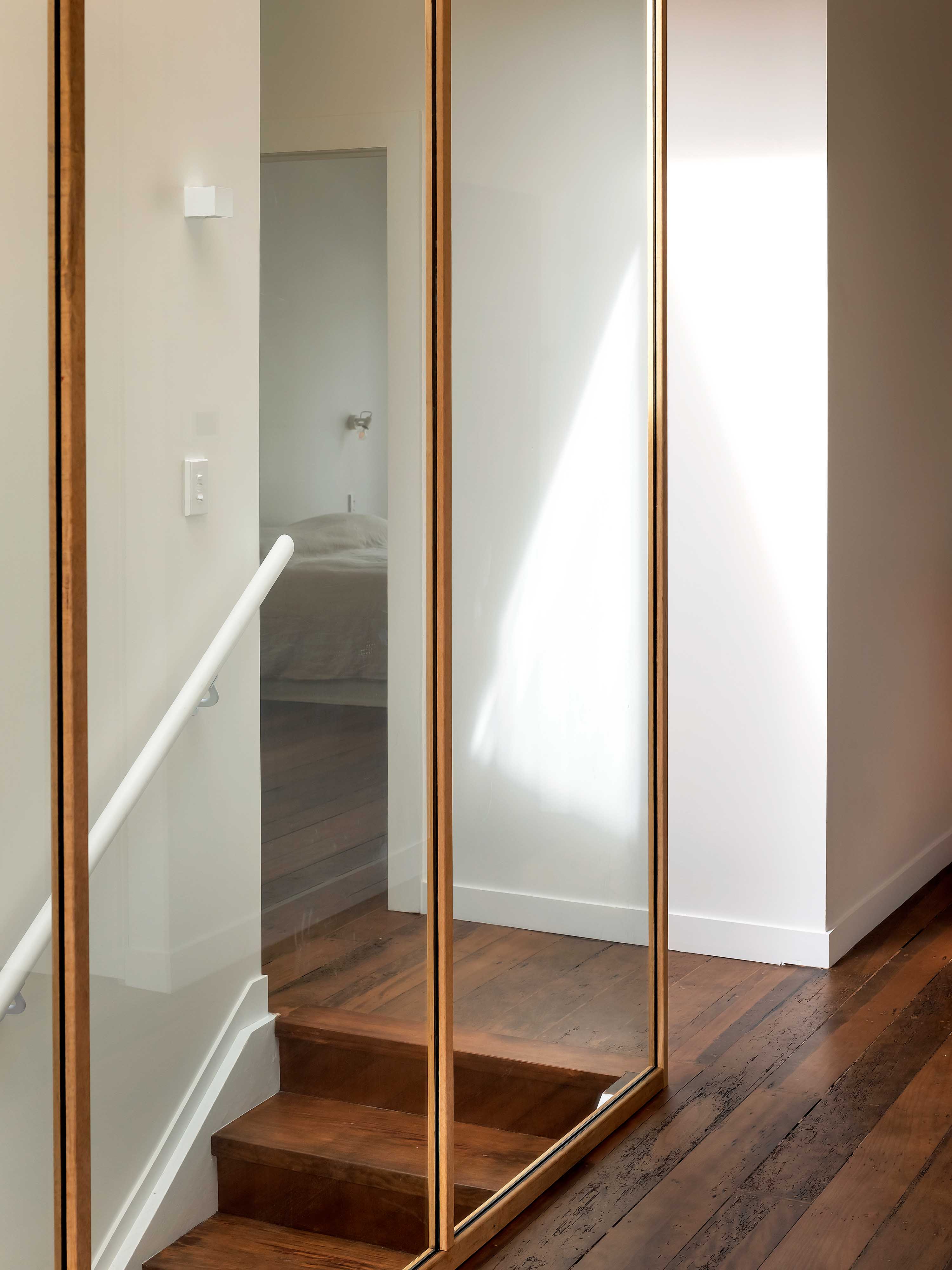 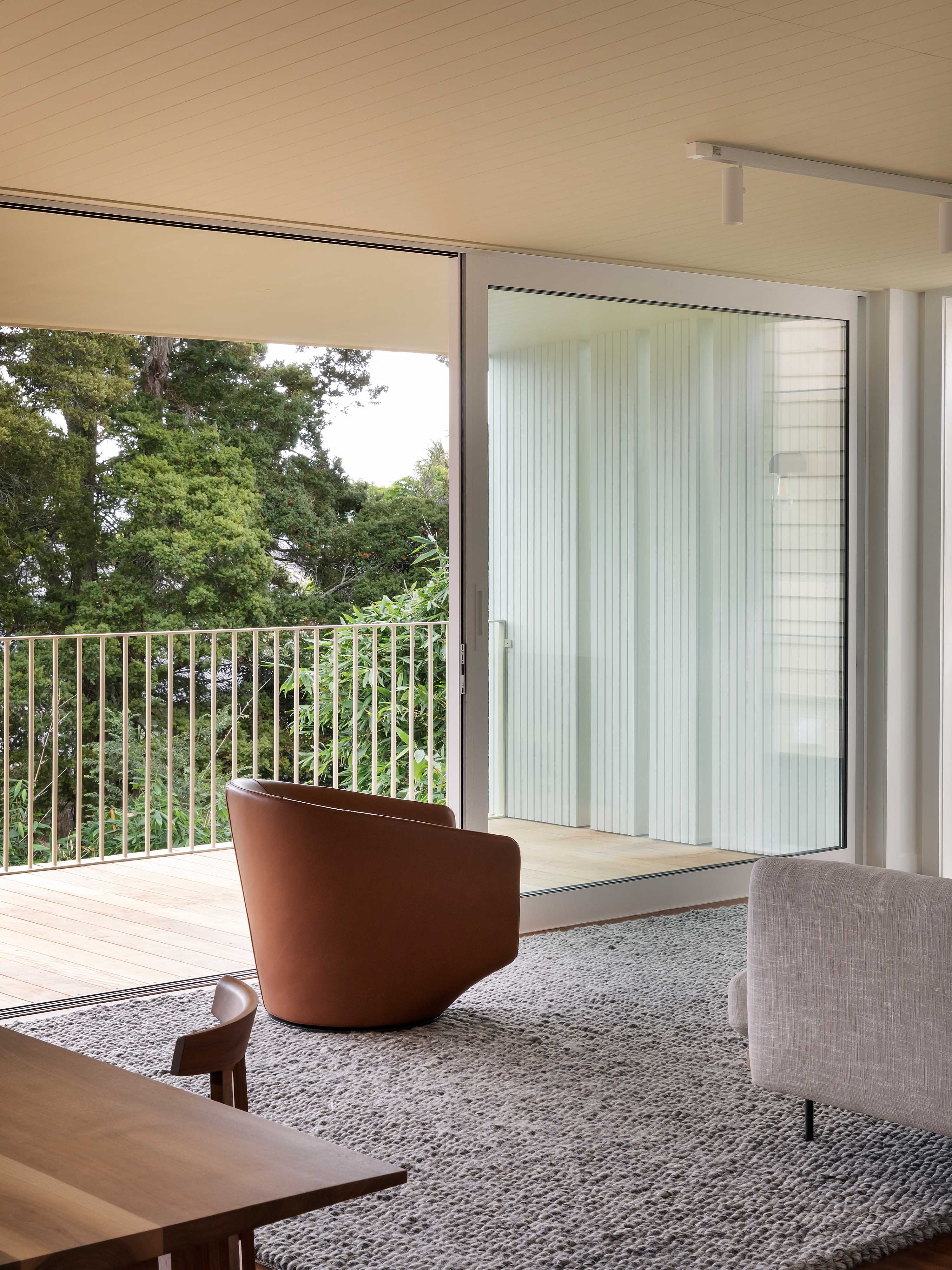 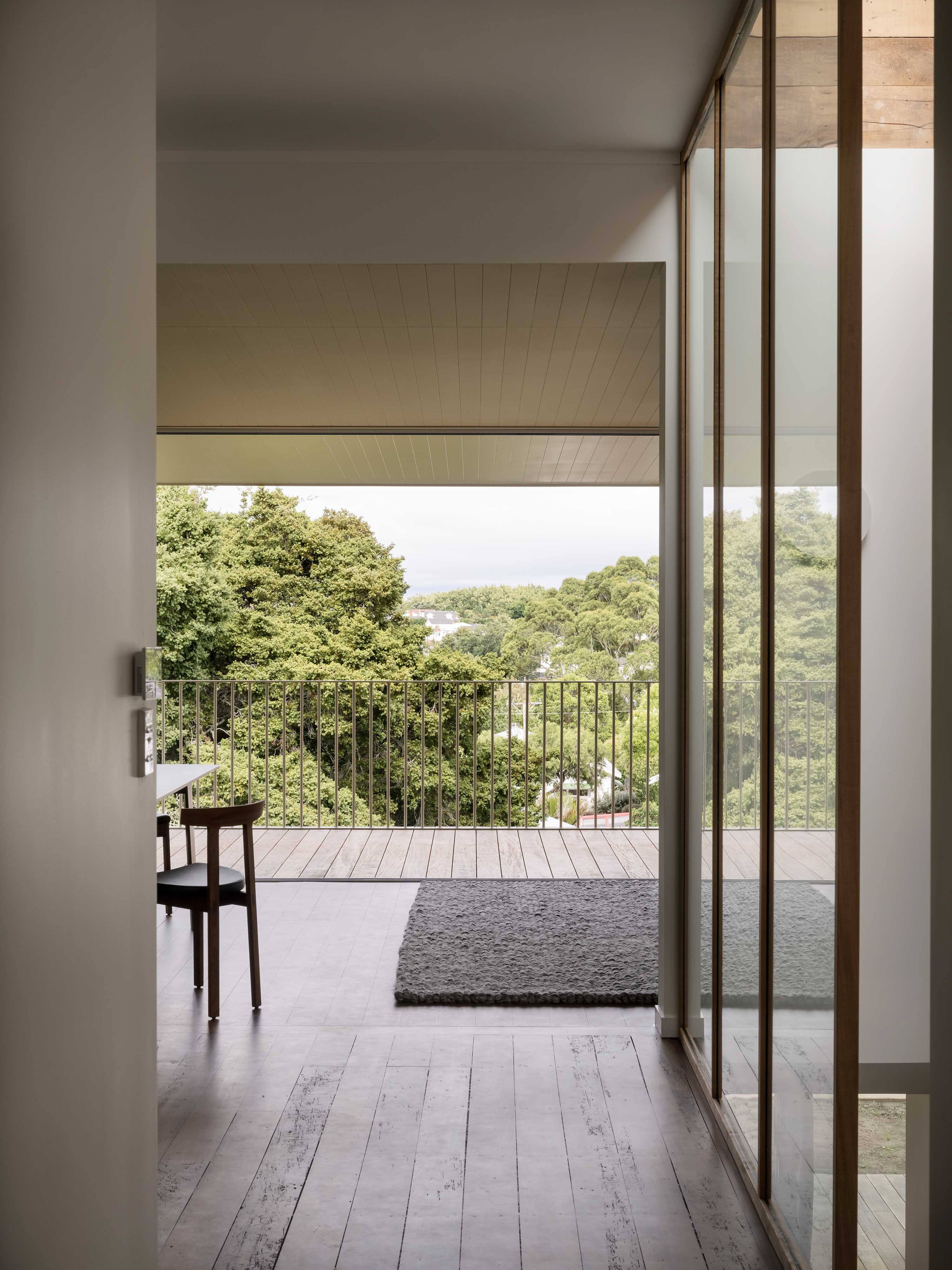 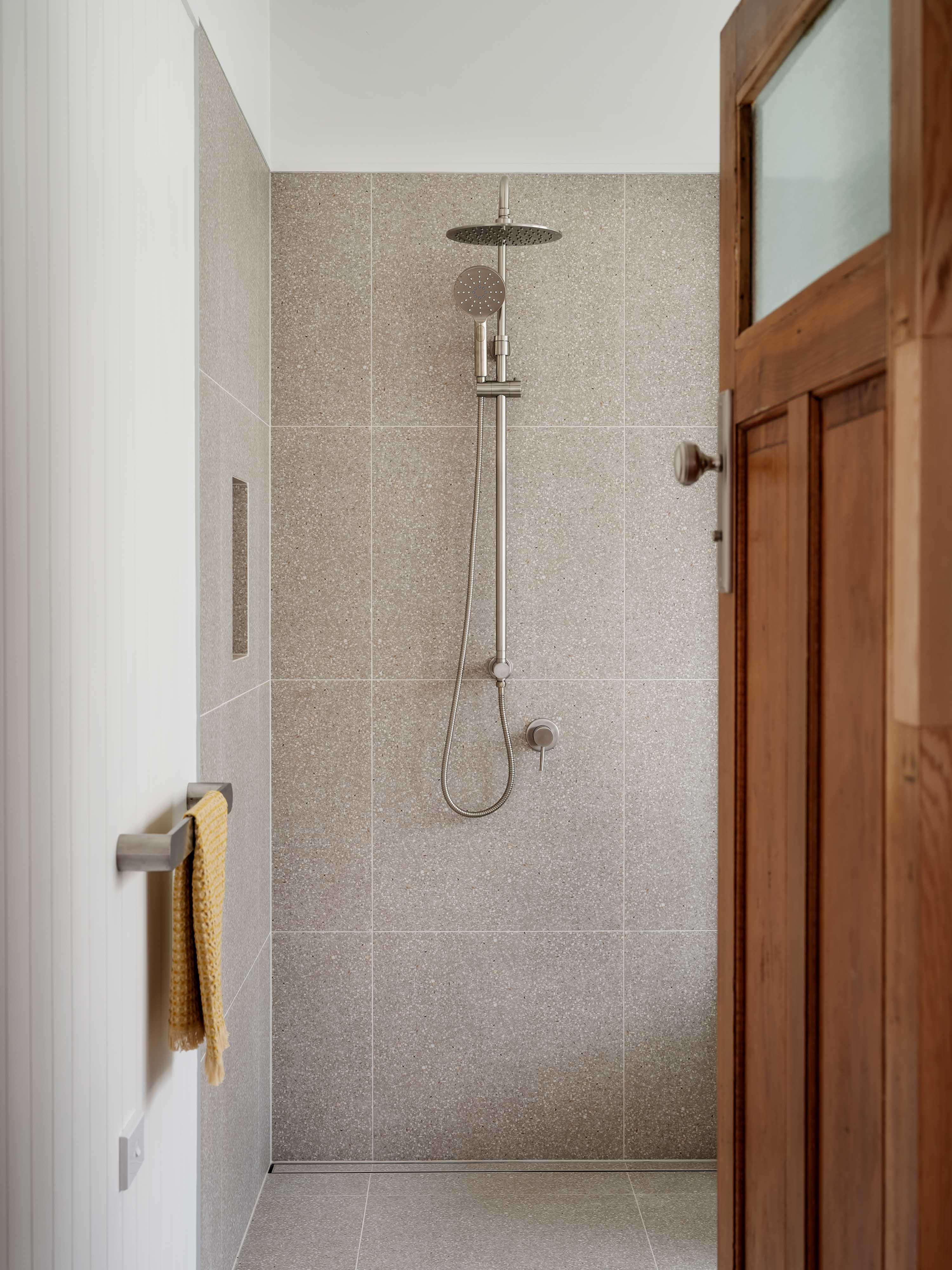 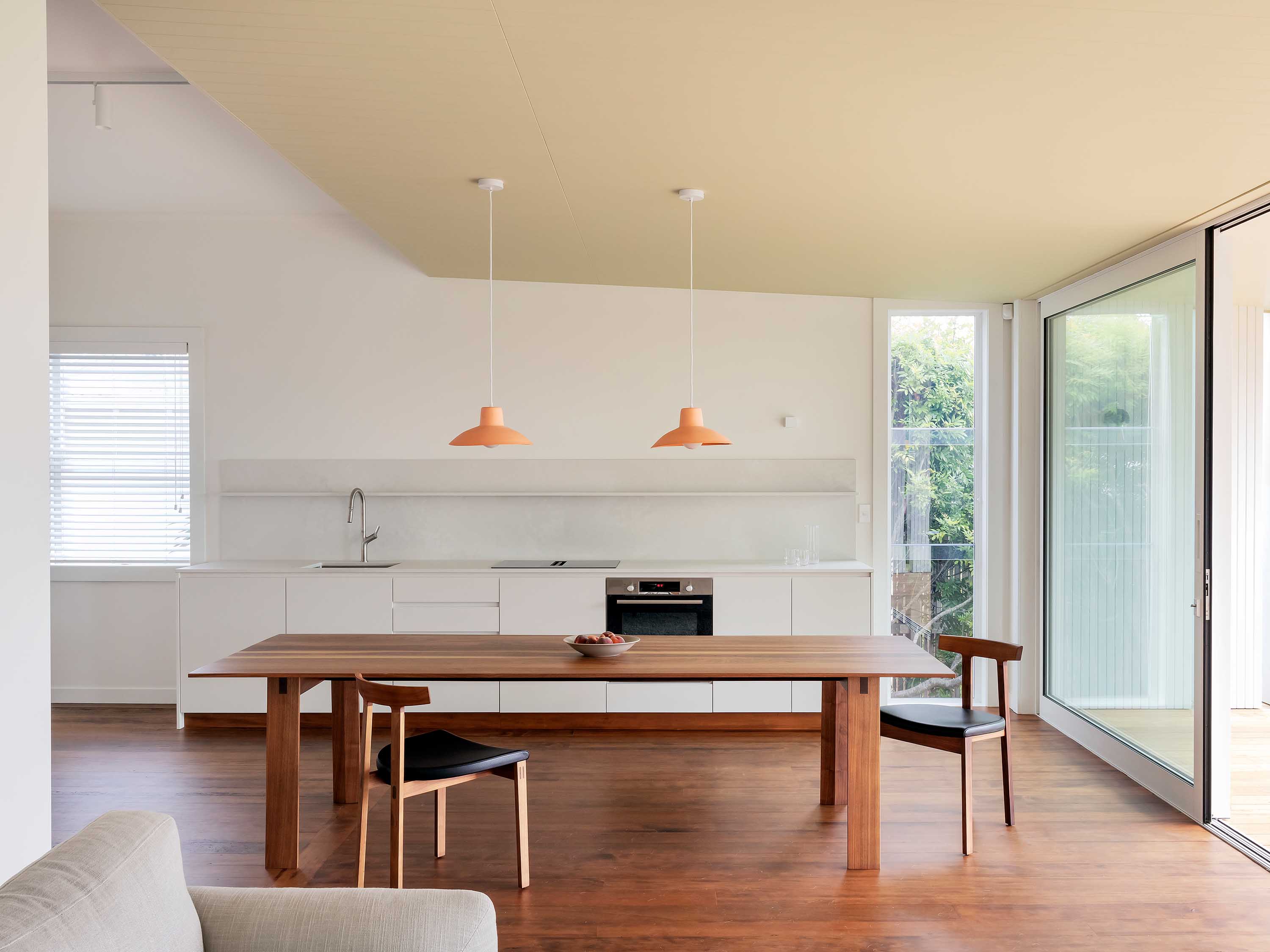 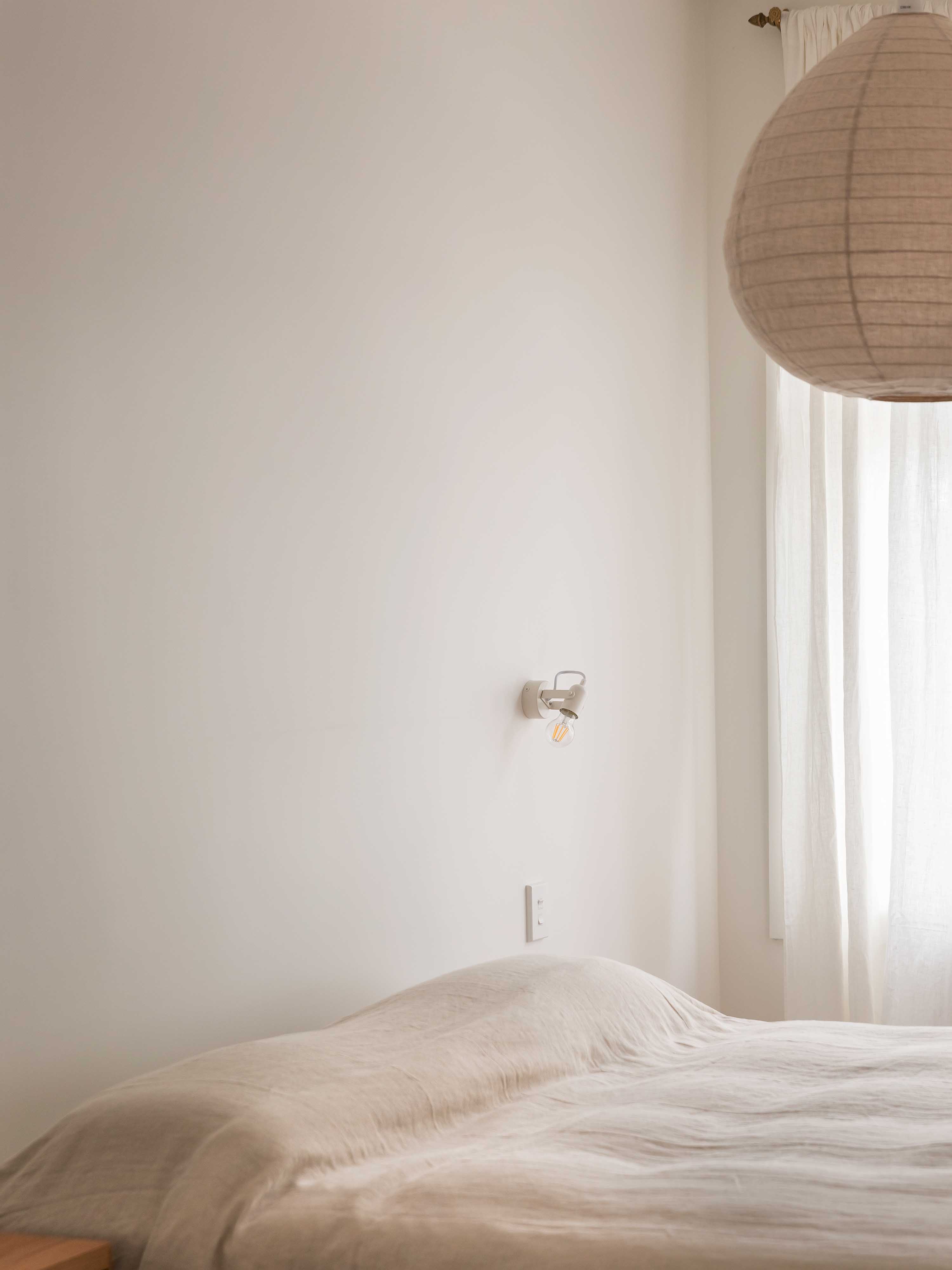 The kitchen is a long, simple bench pushed to one side of the room. “We wanted to deconstruct it, with no heavy cupboards above,” says Adele. It is augmented by a Tim Webber dining table in walnut and, to the rear of the space, a bank of cabinetry which conceals the laundry and contains extra storage.

There’s a minimal richness to the aesthetic, achieved as much by the reuse of materials and references to the past – cue contemporary versions of Shugg windows – as to the sensitive colour choices. Aalto ‘Tax Evasion Half’ on the ceiling has both the warmth of yellow and a slight green tone that picks up on the surrounding trees. “Rather than use a lot of colour, we pared it back to celebrate the existing timber floors,” says Adele. Highlights of terracotta tile on the fireplace hearth link to a pair of peach-orange pendants above the dining table. Everything else falls away into the background.

The new balcony deck, which amplifies the living area, perches on 90mm round steel posts. Viewed from the garden, the extension, with its narrow vertical shiplap cladding, has a modernist elegance, floating out over the trees. Tall slots in the sides of this rectangular volume allow privacy and slivered views of suburbia. Stand just so and the brutalist spire of St Joseph Catholic Church is caught in the frame; shuffle along a tad, and the trio of angular half-gables of RTA Studio’s E-type House come into focus.

The slots provide valuable separation from next door, but not too much. Elaine, who has picked up a teaching job at a nearby school, welcomes the sense of community that having people nearby gives her. “The neighbours are lovely and have become friends,” she says.  Downstairs, the rooms are revamped so that, someday soon perhaps, she might take a flatmate on board. Meanwhile, with the borders opening, Adele, who is now based in Sydney, has her eye on occupying it herself, bringing the grandchildren across the Tasman to reconnect with their grandma.

Youthful giggles will no doubt temporarily unsettle the numinous peace. That’s just how it should be. “This was a project for us all to focus on in a difficult time, but also a space for Mum to start a new life,” says Adele. “The hope was that the house would bring joy and sanctuary for her.” And it has. 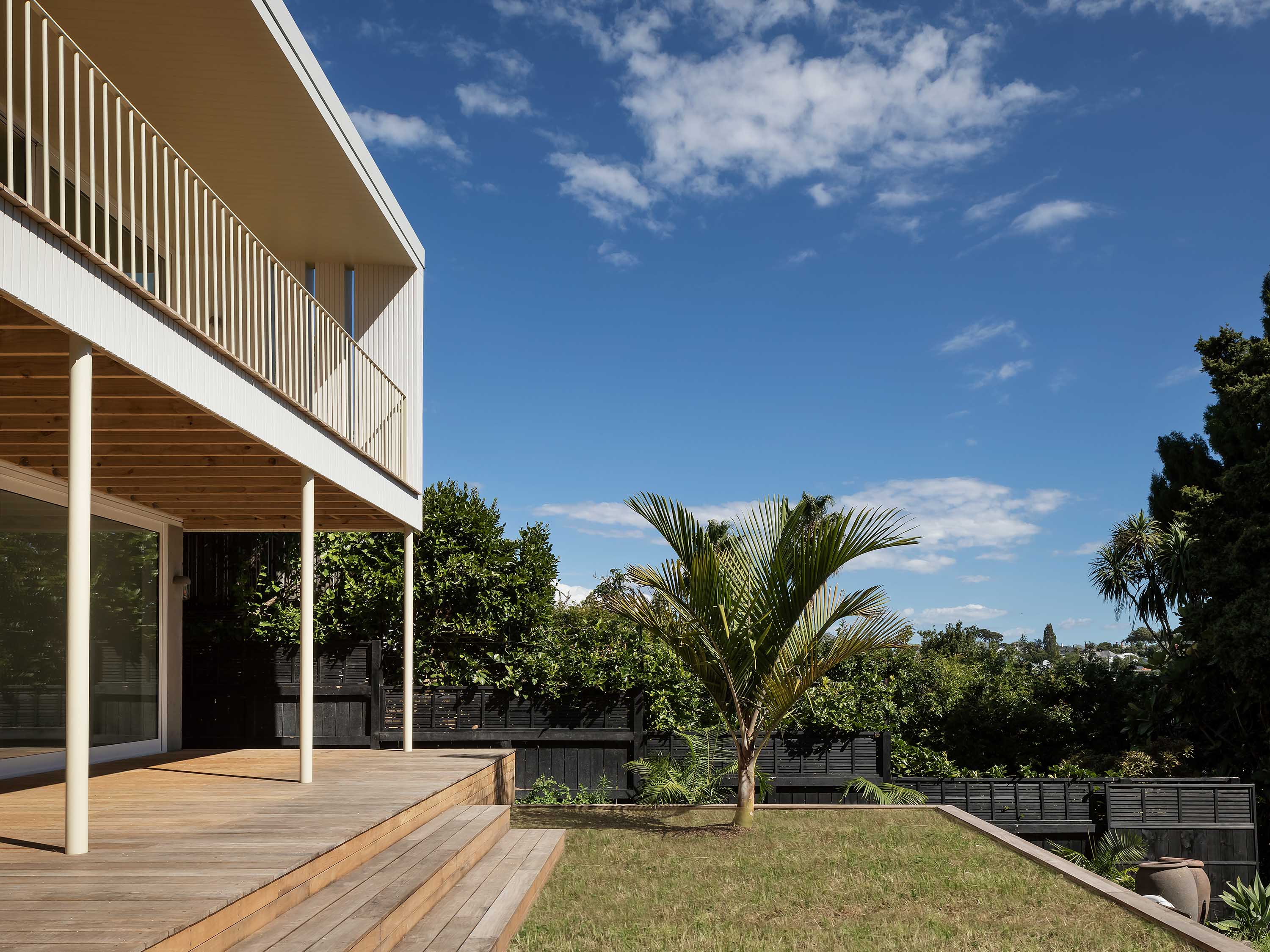 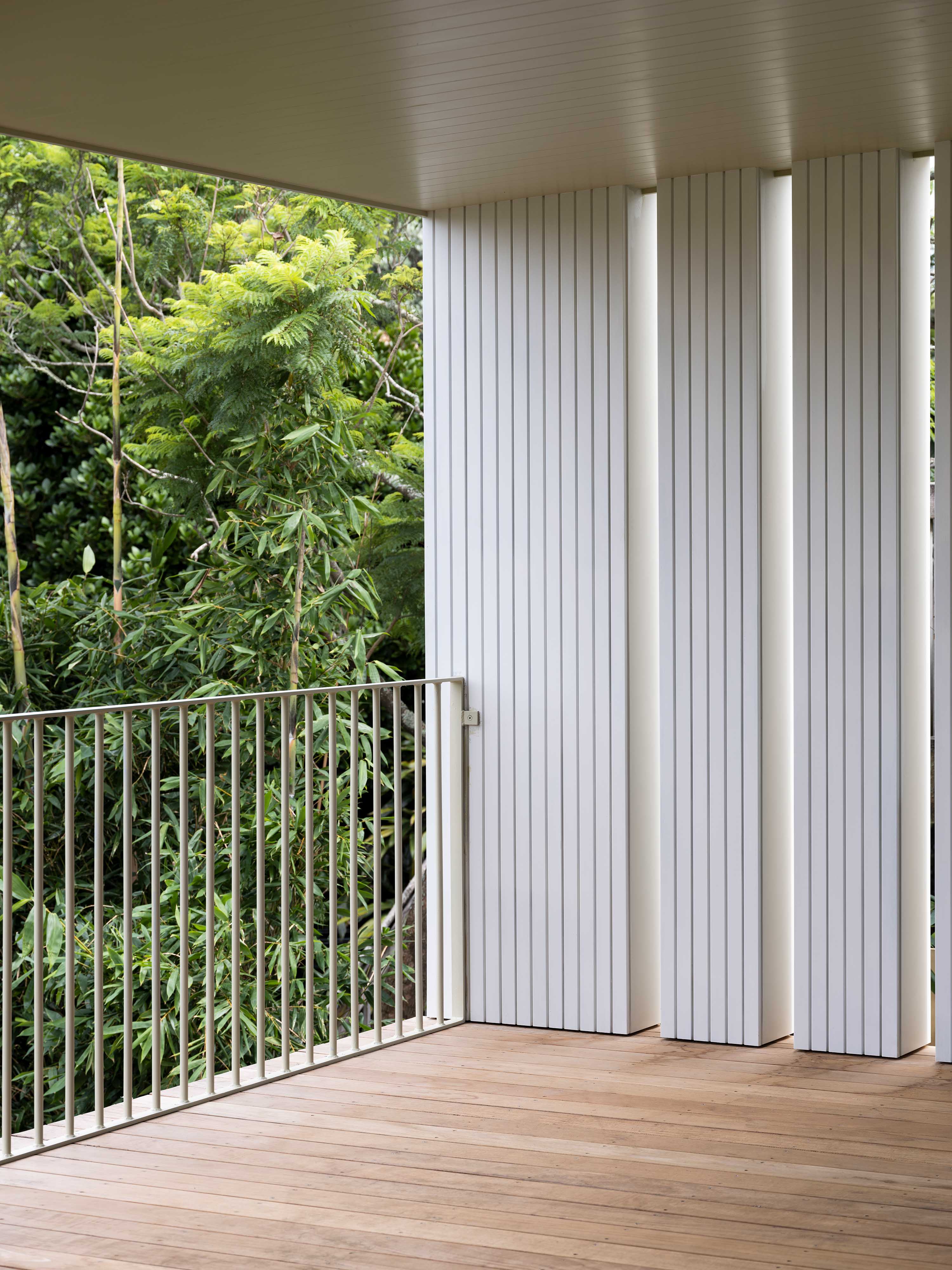 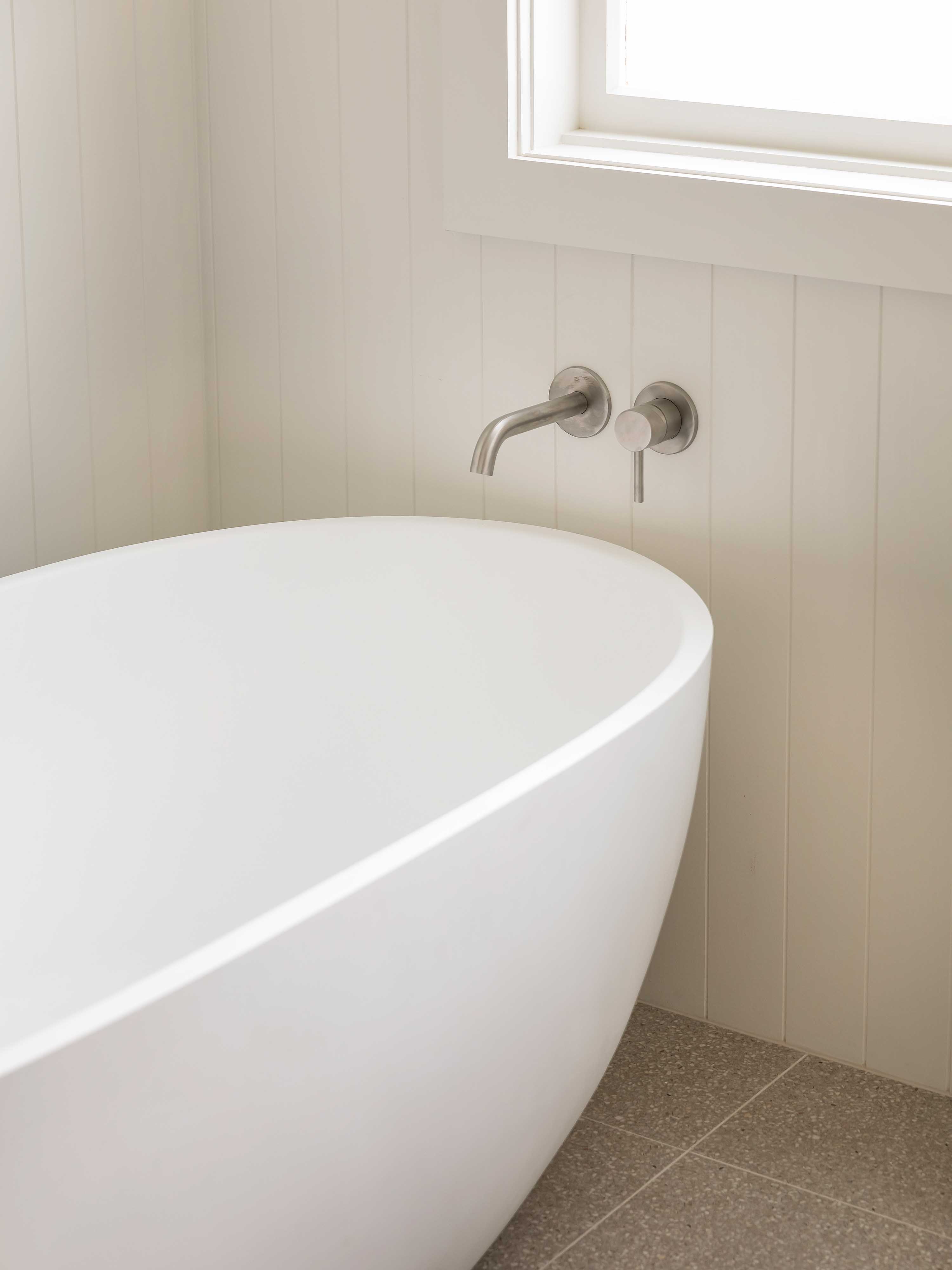 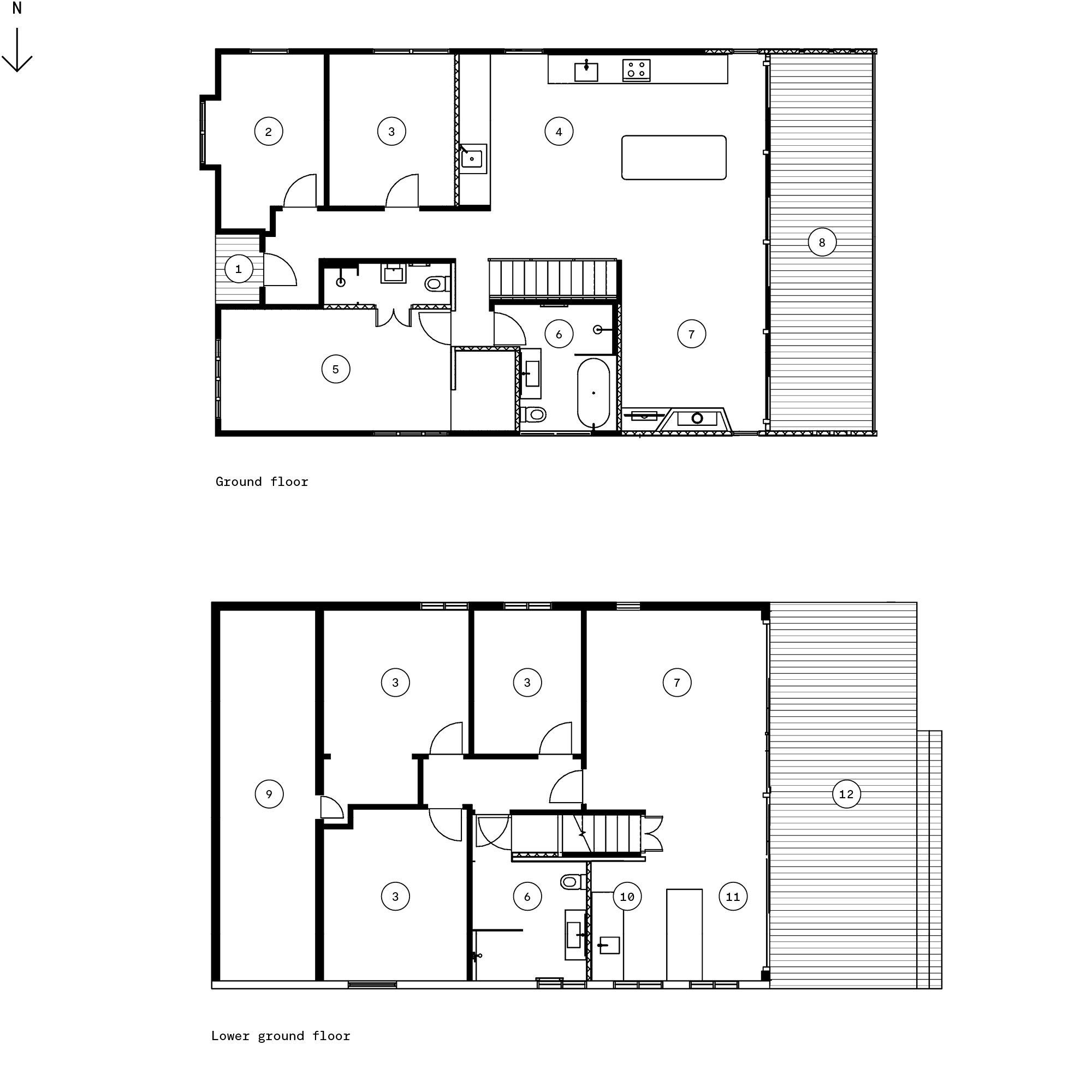 Renovation
Villa
This story is from Issue
12
Print EditionBuy Now