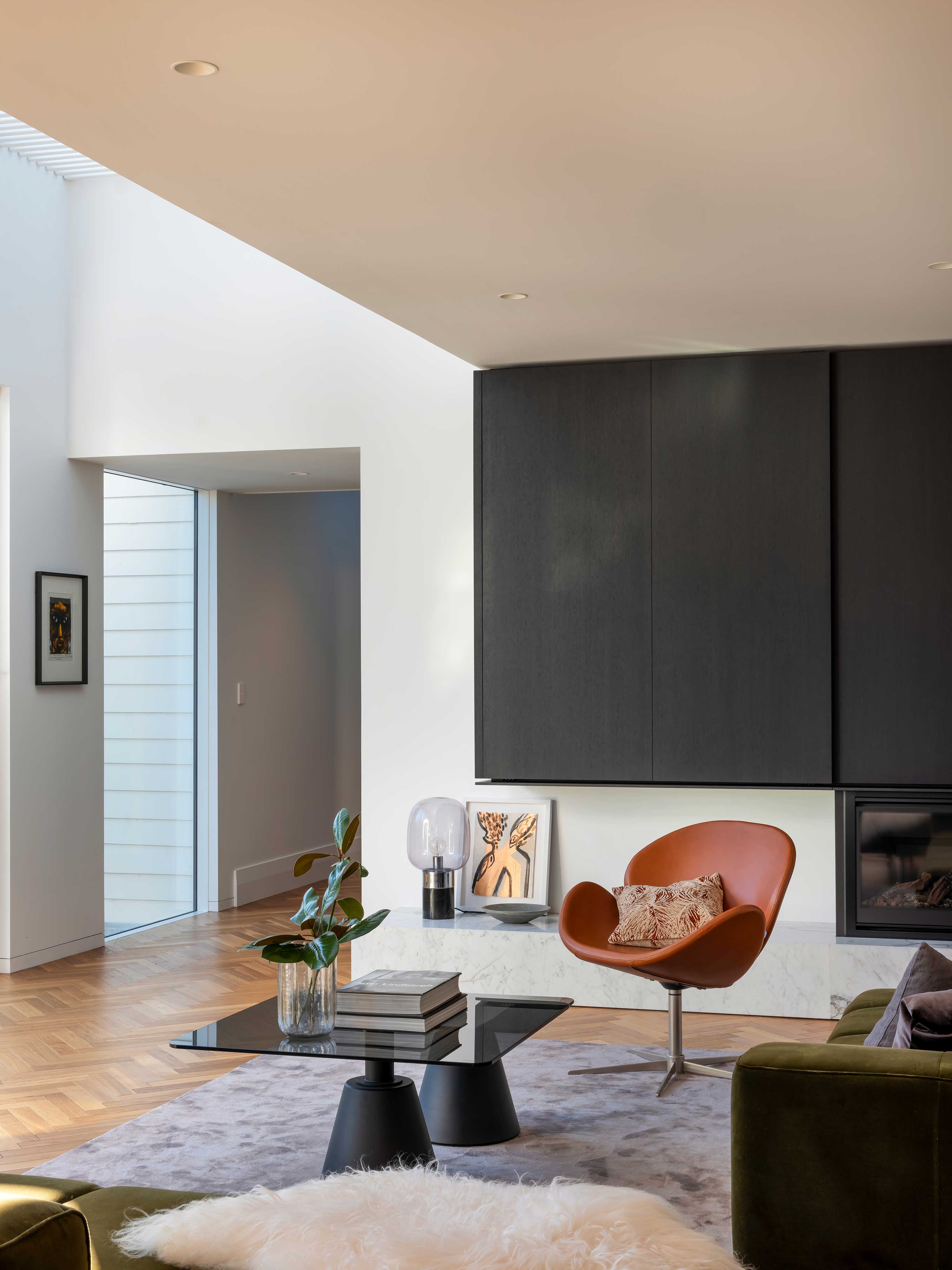 In its original incarnation, the two-bedroom bungalow that fronts a Grey Lynn street in Tāmaki Makaurau housed the owners and their three children for five years. With a new addition by José Gutiérrez, the family now lives in an urban oasis, surrounded by leafy layers of greenery and reflected light.

The couple bought the 100-square-metre home in its raw, 1990s-era state in 2014. At the time of moving in they had one child and five years down the track, they had completed their family. The modest bungalow had managed to accommodate the lot of them, and having endured this feat, relocating a gang of preschoolers for a year’s secondment in New Haven, Connecticut, seemed like no problem at all. But before doing so, the couple had commissioned José Gutiérrez to reimagine how contemporary living could be created on a 430-square-metre site located in a flood zone and heritage area.

Entrusting Gutiérrez to articulate their aspirations for a four-bedroom family home that they would cherish and one their children could happily grow up in, the owners signed off the plans and boarded the plane.

Warm and affable, Gutiérrez isn’t someone who could separate the human from the building. “We are dealing with people and if you don’t like dealing with people, I don’t know how successful the building will be,” he says. If a successful outcome is a nuanced, and at times poetic, home that both connects and defines old and new, heritage and contemporary, and with clients-turned-friends, Gutiérrez has more than done his job.

The house drops down a couple of metres from the street and, not unusual for the era, the entrance is at the side of the bungalow. Rather than fight with this element of tradition, Gutierrez retained it, using the entry point as a juncture. It separates the language of the two building forms, and starts a new conversation. From the entry path, you experience the recognisable bungalow form, while the addition raises your curiosity. Void of windows to the east, it appears as a solid form – an abstract and sculptural break away from the familiar narrative.

“It creates some interest,” says Gutiérrez. “It doesn’t detract from the character area, but the commentary is that this is 2021. The bungalow is more than a century old, so why would you replicate that for contemporary living?” he says.

Gutiérrez’ holistic approach to design – his applying of contrasts in natural light, shadow and volume – to the addition becomes apparent on entry through the full-height front door. A reduced volume, the lobby is a brief holding space to take in the picture window directly ahead. Like an animated painting, a fixed pane of glass fills with abstract glimpses of sky, greenery and water. From here, you turn right to the private spaces in the bungalow and left into the living atrium, which floats in a sea of greenery. It’s a private oasis, foliage from the site and surrounding landscape fills the outlook with leafy layers. The flood zone dictated the elevation of the addition – the new building couldn’t be any lower than the existing building – and Gutiérrez has used this restriction advantageously. 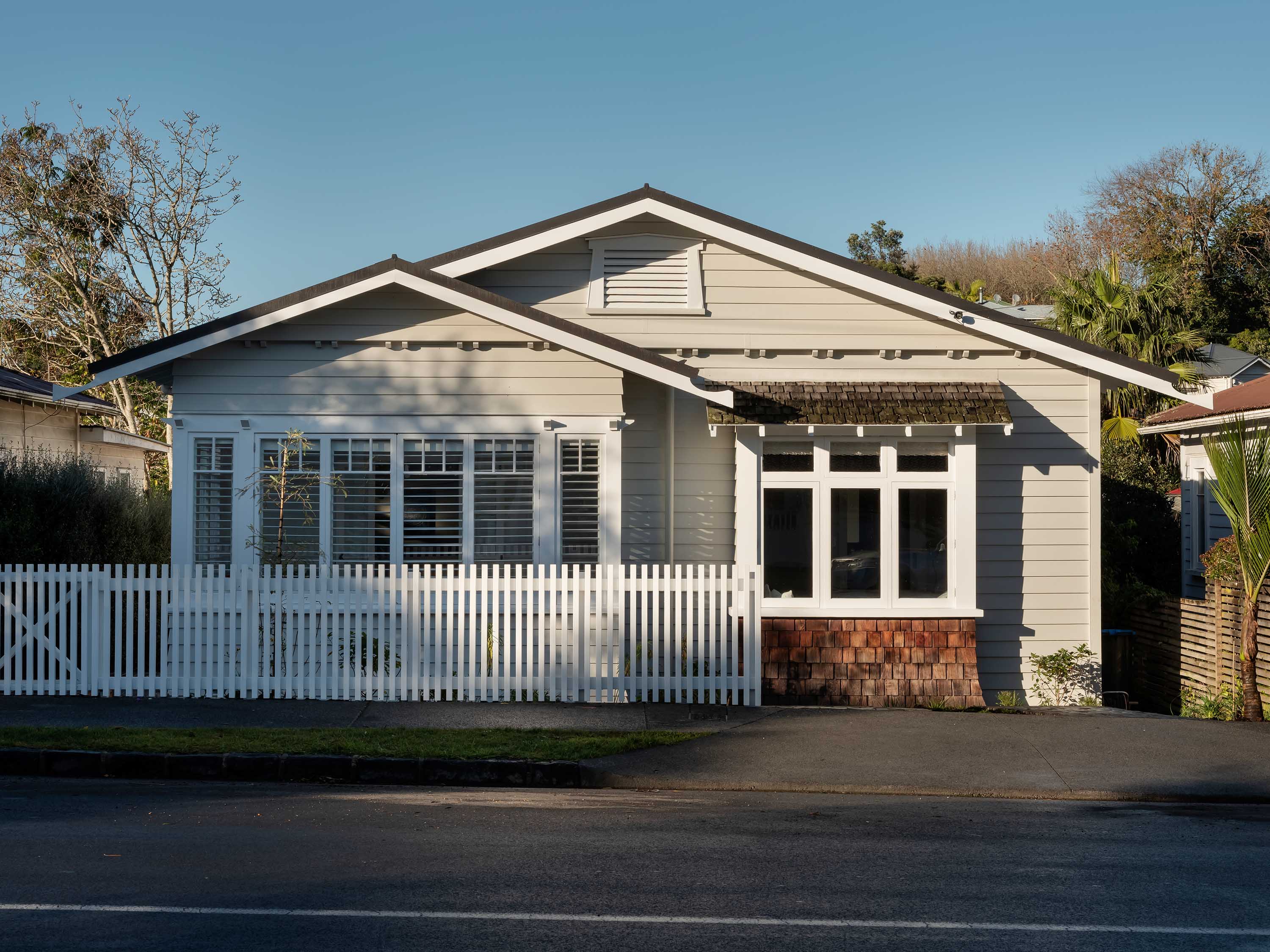 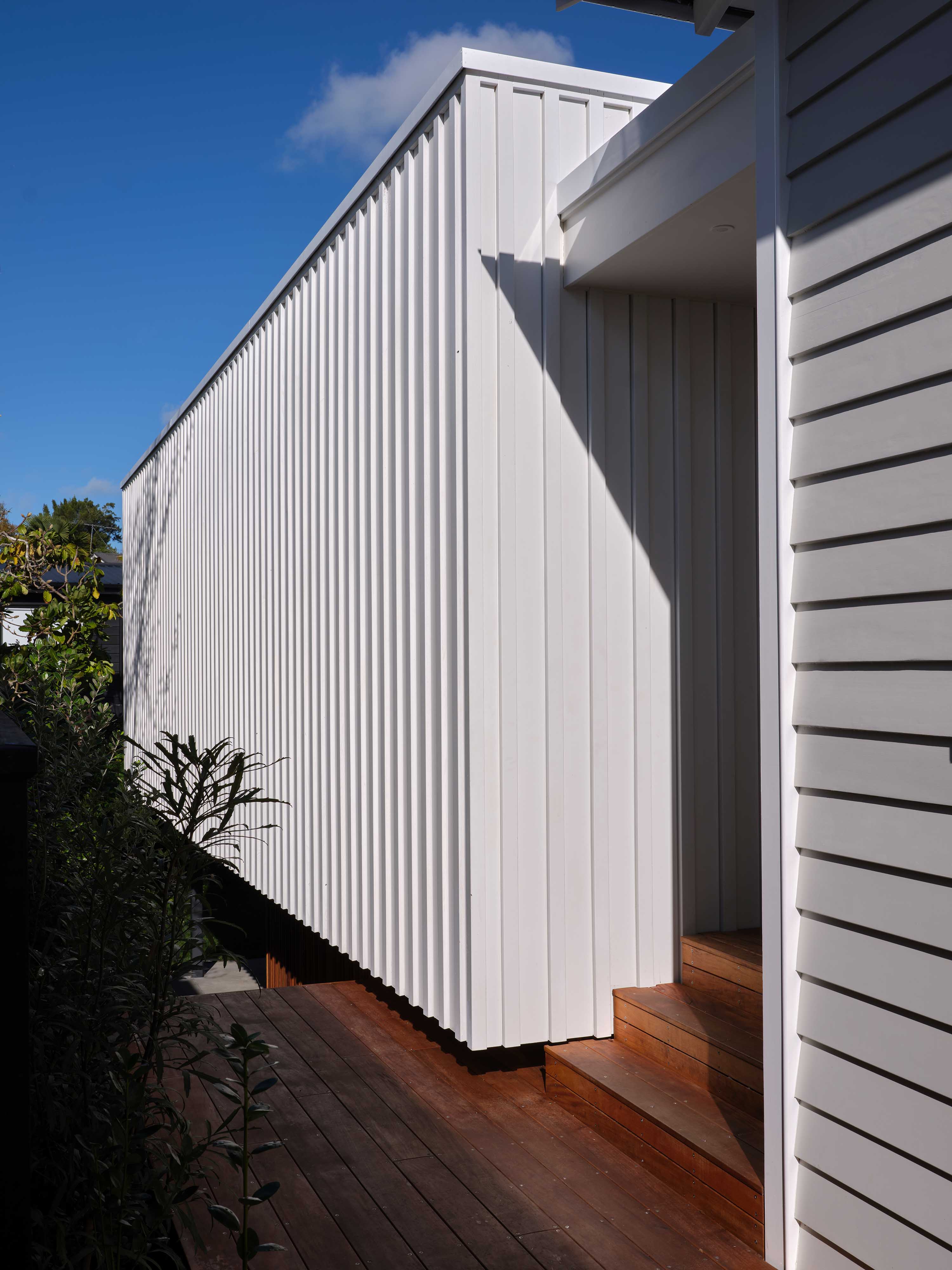 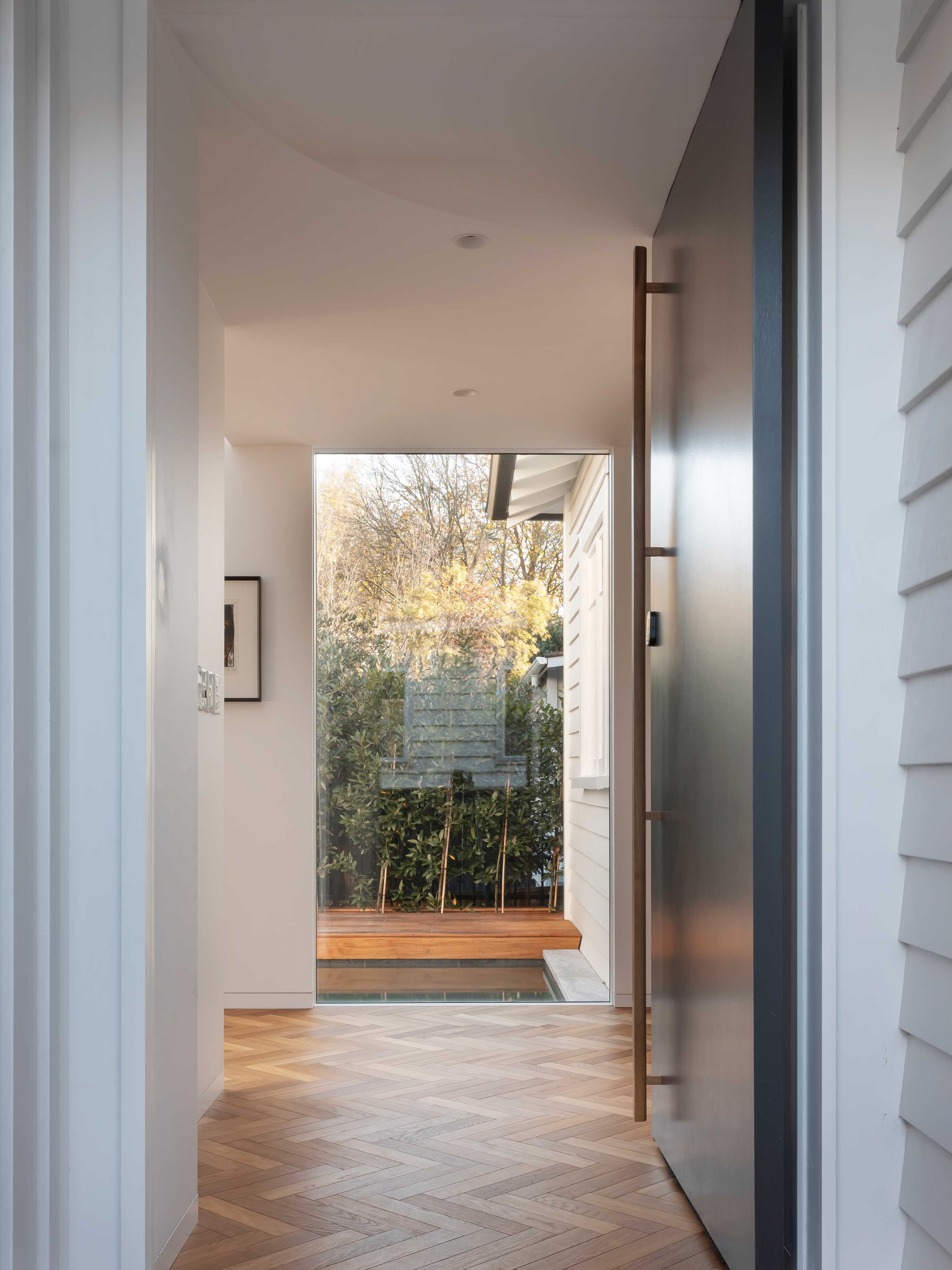 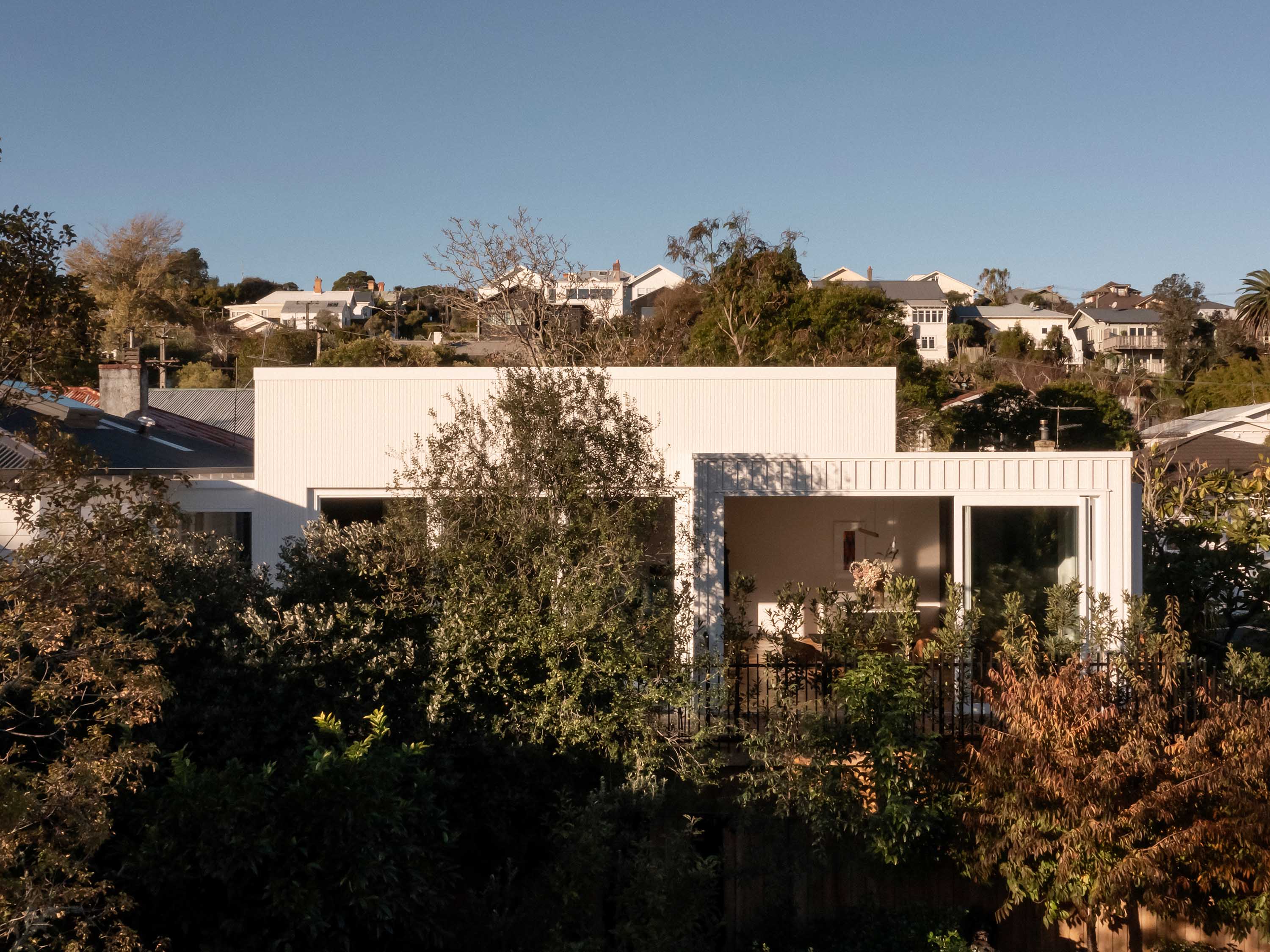 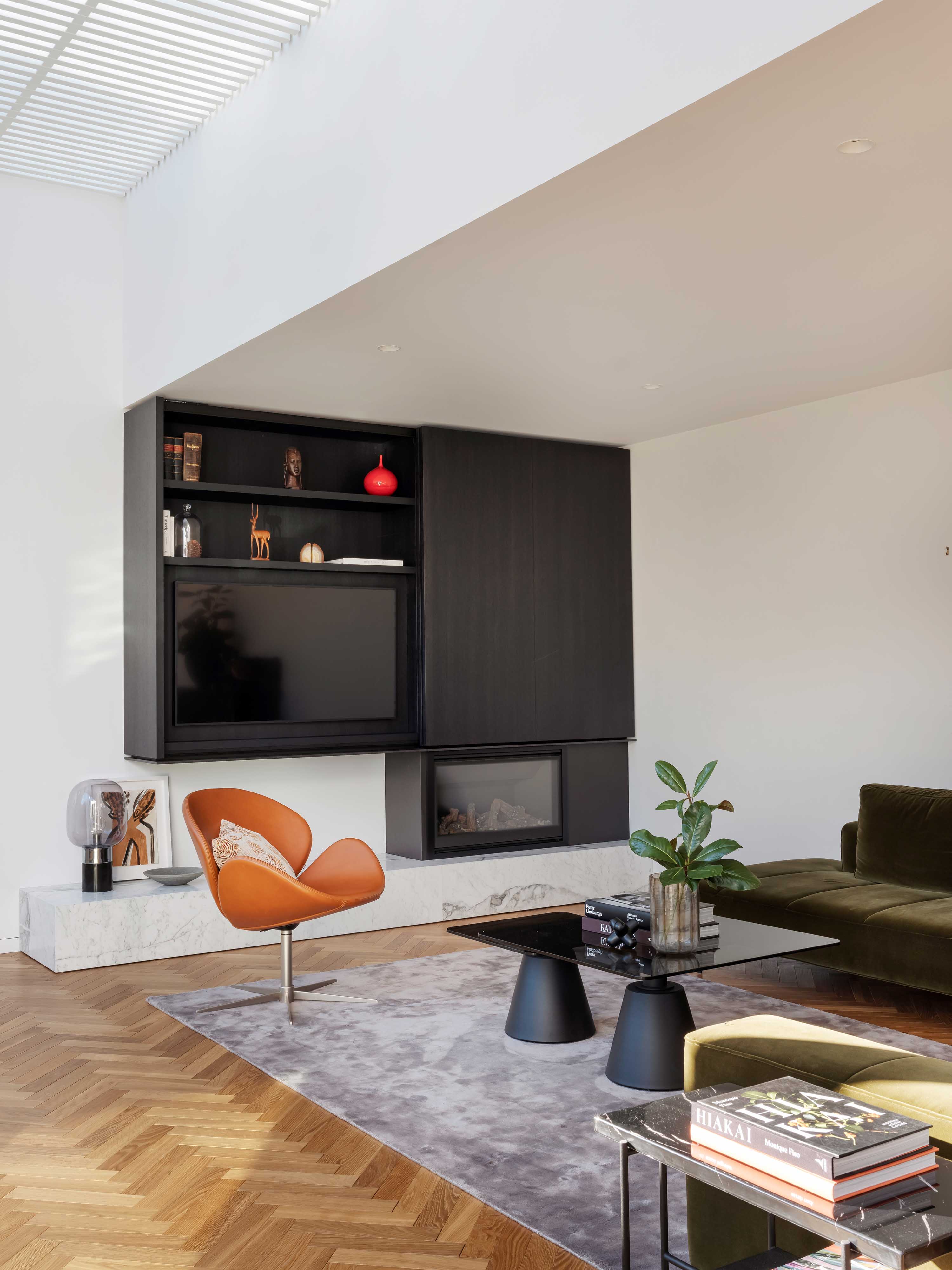 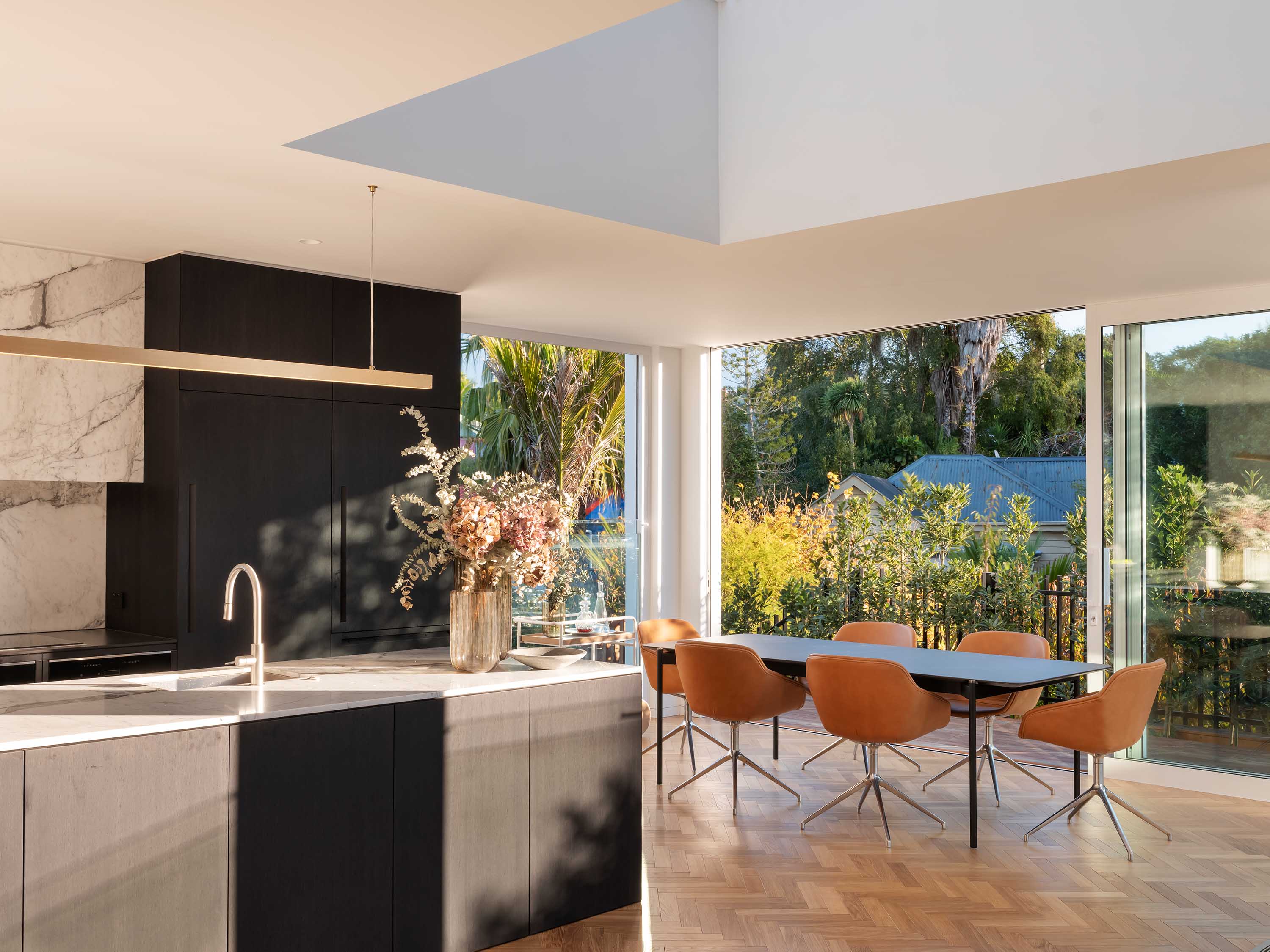 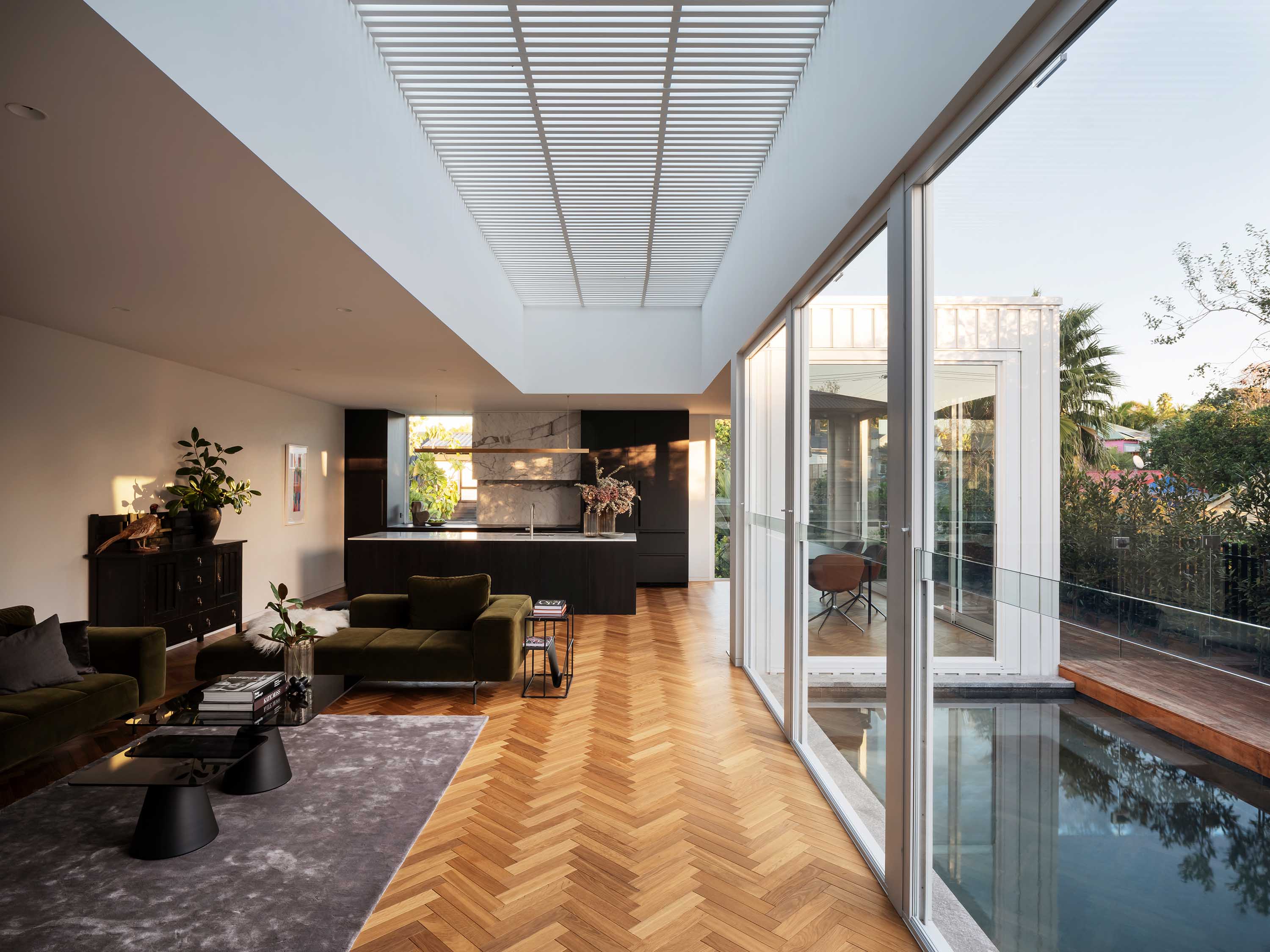 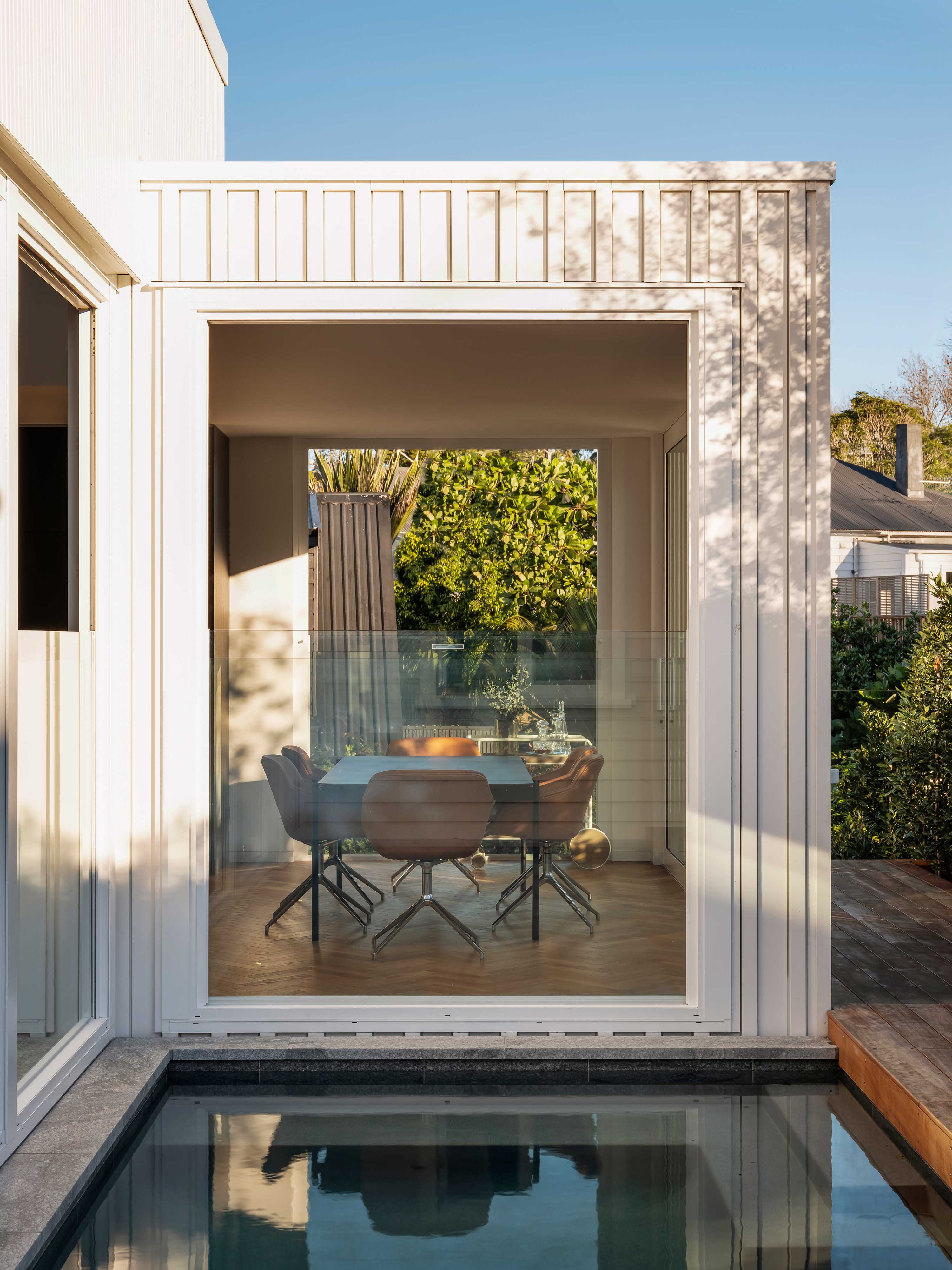 Verticality amplifies volume in the open-plan atrium, with a central double-height space that defines different zones. Openings are full-height and an elongated skylight extends the length of the building. Timber battens, reminiscent of picket palings, clad the skylight and enrich the interplay of light and shadow. “The character cues are only there because of the location,” says Gutiérrez. “In a different suburb, the design could’ve looked quite different.”

With three kids to entertain in a suburban setting, a pool was part of the brief. Due to the site’s limitations, it was always going to be more of a plunge pool than a party pool and it needed to be close to the house. But rather than being just a plunge pool, Gutierrez ensured it became another architectural element of the home and the extension wraps it on three sides. With the glazing facing west and light hitting the water and reflecting up into the atrium ceiling, it brings in movement. “In an abstract way, having water in close proximity creates another layer of emotion in the house. It makes the house more special,” he says.

Another element used to great advantage is the area beneath the elevated extension, which has been designed as another living space. “We went to great effort to support it with what appears to be just one post,” says Gutiérrez, of the area that provides a shaded space in summer and flows to a barbecue area. “It adds to the whole picture, rather than being a forgotten storage area.” Vertical cedar cladding emphasises the floating nature of the addition and creates a break between the two forms. The tactile timber is experienced by the owners, and the white Ashin Dura weatherboard above is experienced by the neighbourhood.

On completion of the project, Gutiérrez saw a drone shot that reminded him of a neighbour’s passing comment to builder Mike Macdonald during construction. He had said that it looked like Mike was building a big Ark. “It looks like the building is floating in a sea of greenery,” says Gutiérrez.

While no one is anticipating an ‘ark’ in the Biblical sense, the four-bedroom home is certainly a haven for the family, bringing them comfort and retreat in these uncertain times. Having not being present for the build, they couldn’t fully appreciate how the house would feel, or anticipate details such as the elegant rebate of the timber steps as they meet the cladding at the entrance. “We were a little nervous,” says one of the owners. “But it is better than we expected and has achieved all the things we wanted. The house is a testament to both José’s project management skills as well as his architectural ability.”

As for Gutiérrez, it’s his hope that the holistic approach he’s applied to design speaks for itself and is interpreted, or at least sensed, by those who experience the home. 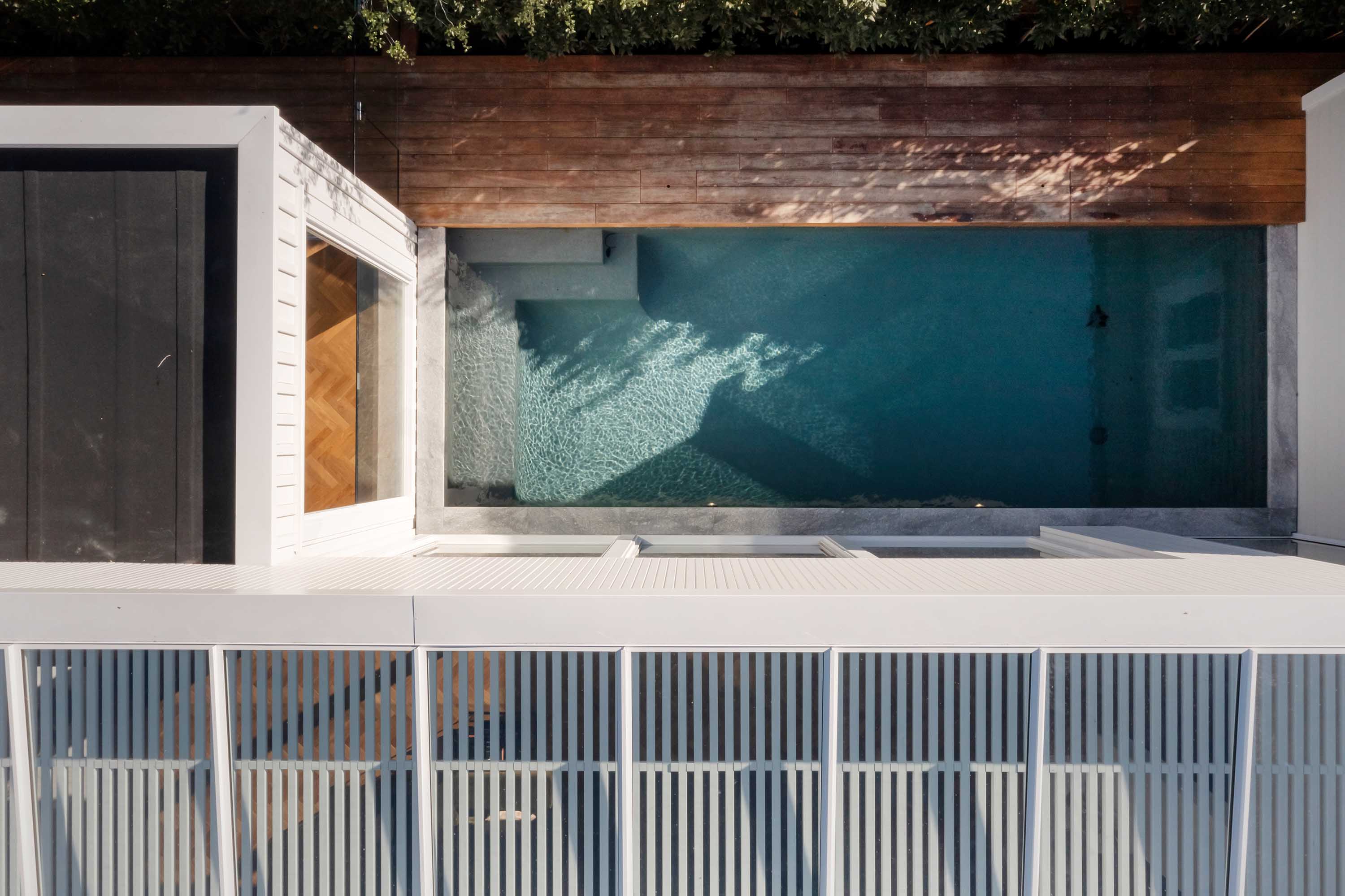 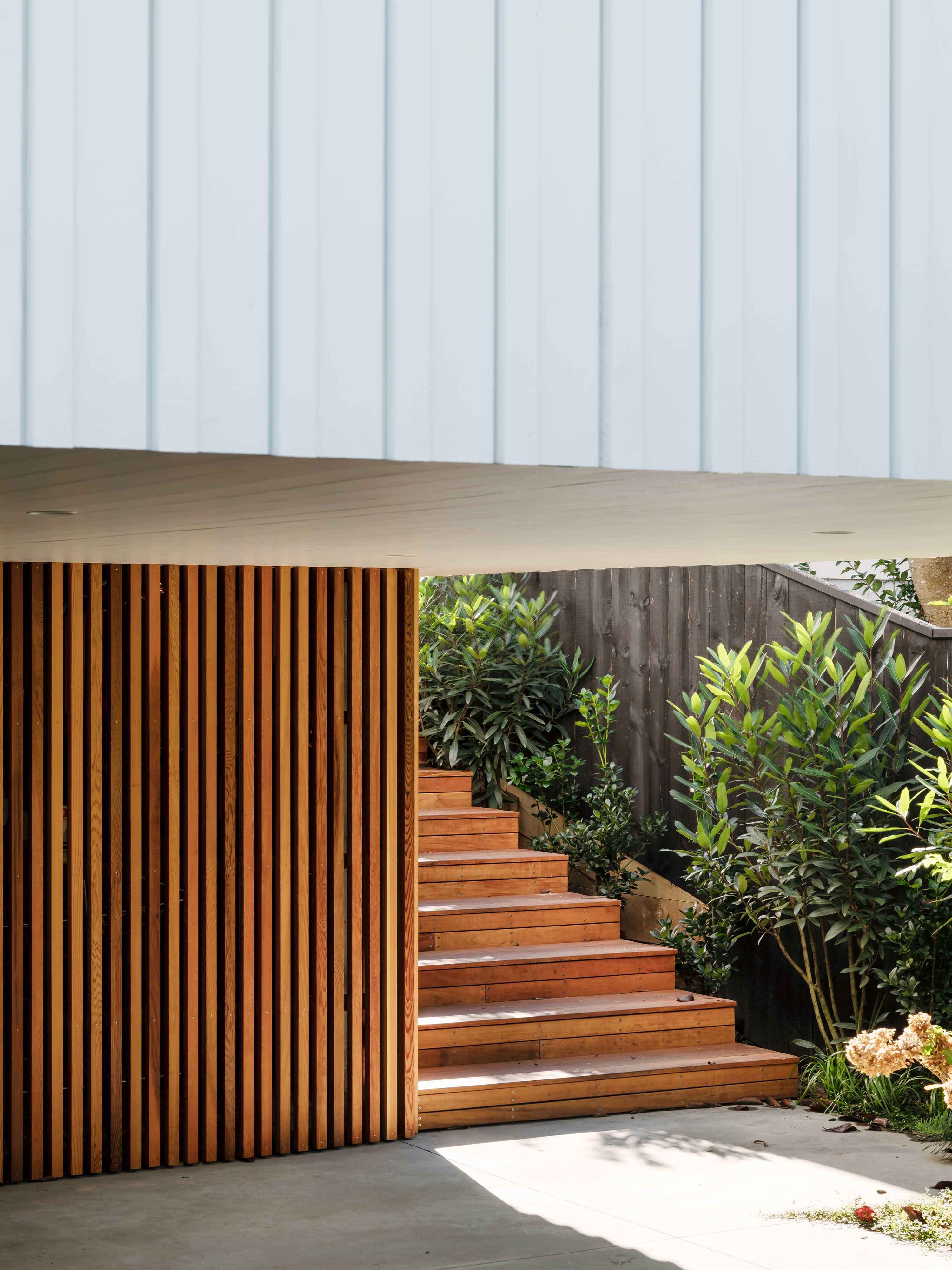 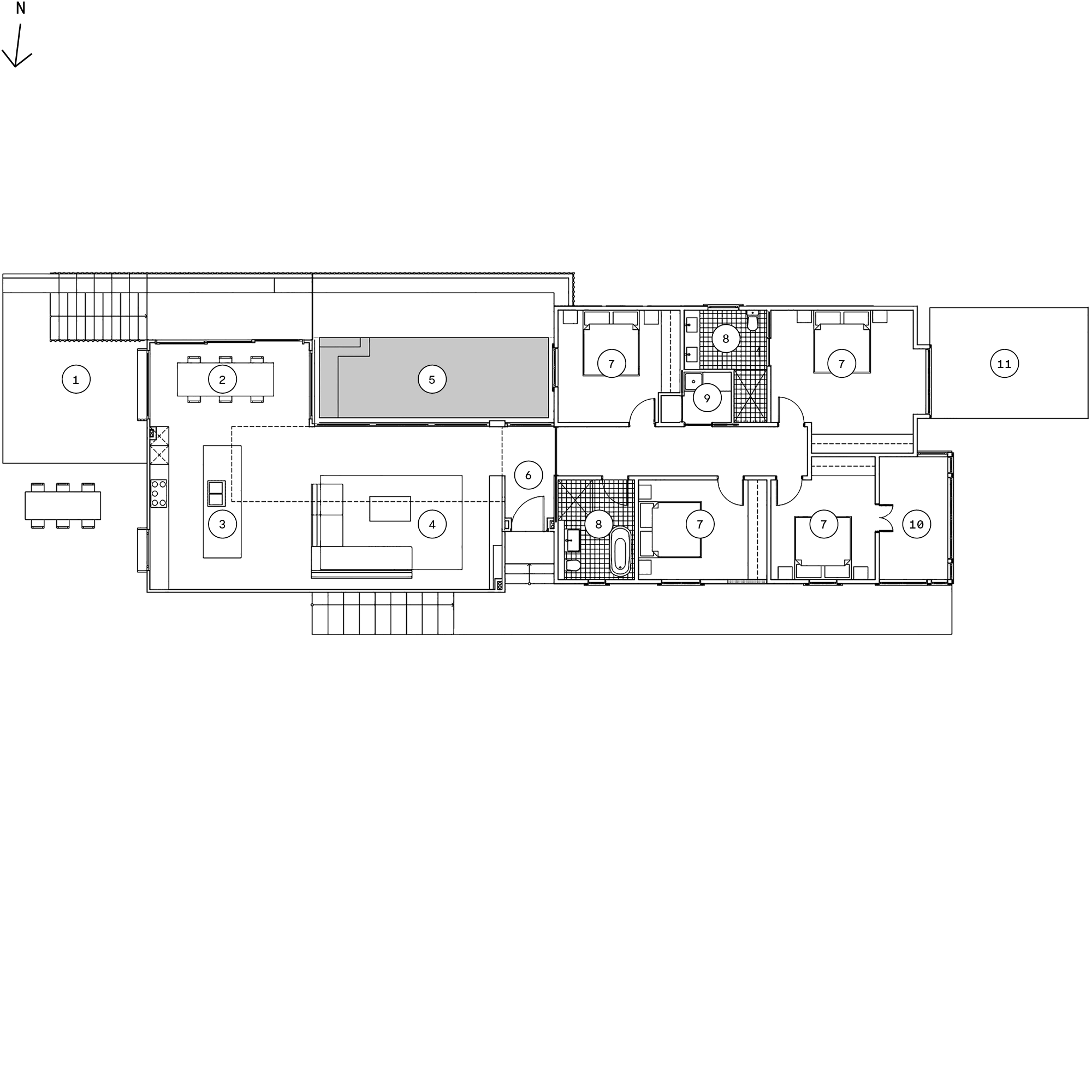