A 1985 house by the late John Scott in Havelock North settles into middle age with loving owners. 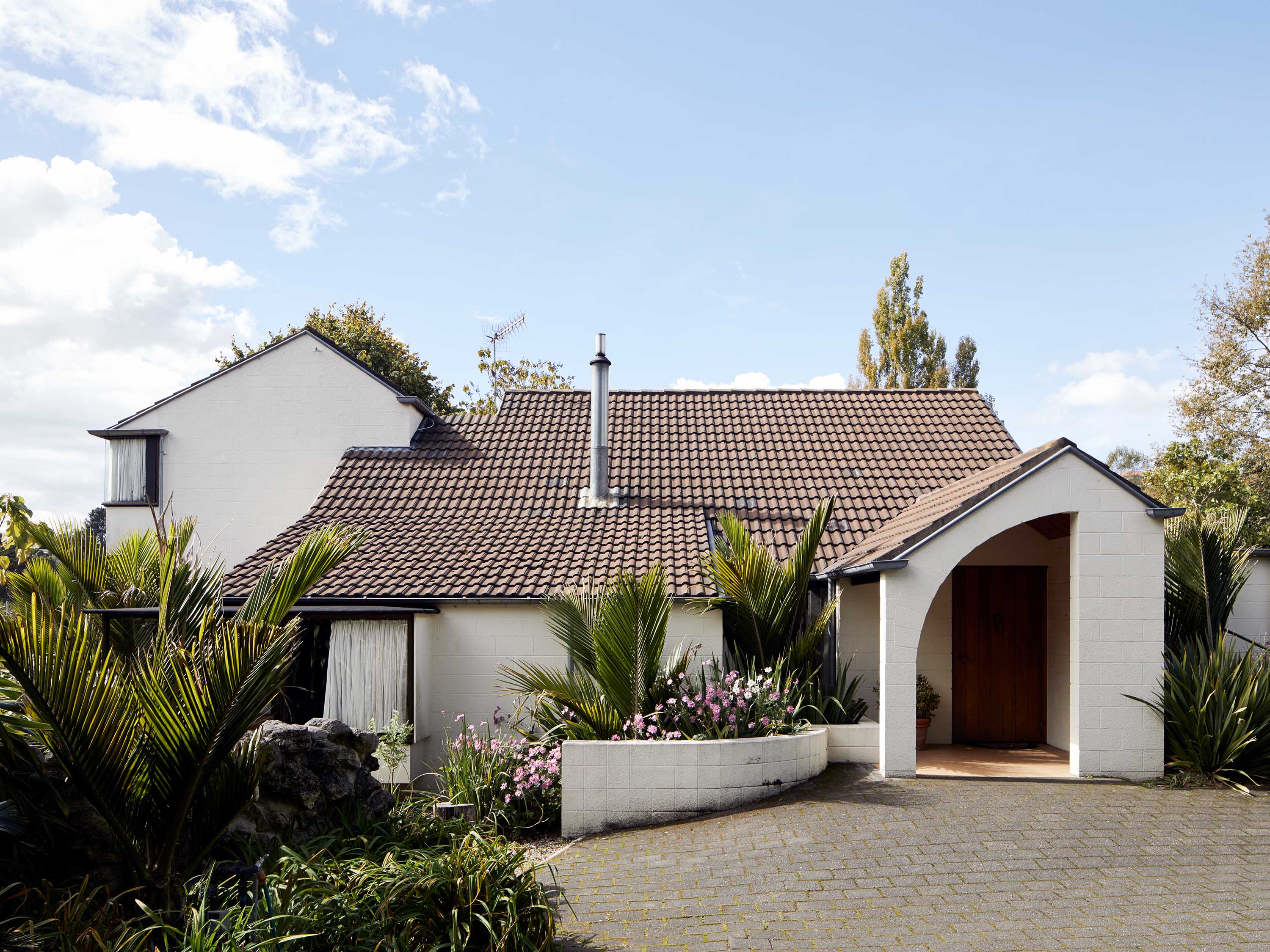 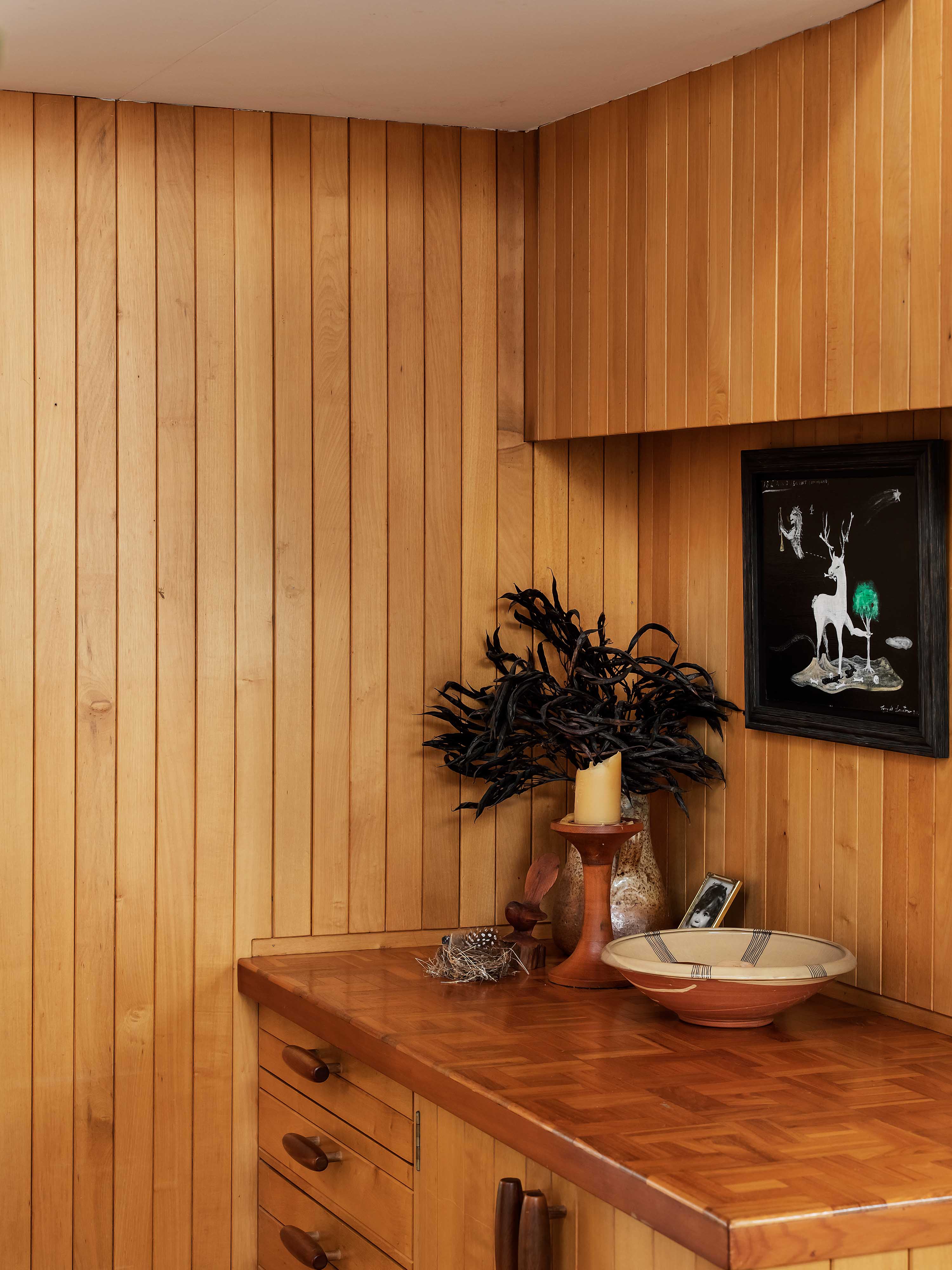 You try not to – you try to keep the gaze of your hosts – but as soon as you step inside Vaughan House you look up, instantly enchanted, mesmerised by its soaring, raked ceiling. How high is this – six metres, seven? Your eyes run up and down the dark, exposed half-hexagon beams, tongue-and-groove rimu tucked behind, then flit over to a great triangular skylight. You can’t stop staring.

Then you realise why you’re having some sort of residential rapture. Because there’s also a connection that runs all the way back to the Chapel of Futuna, Scott’s breathtaking 1961 Karori masterpiece.

This is the home of Kate Galloway and David Ramonteu – one-time winemakers, award-winning gin distillers, partners in work and love, parents of Gala, 15 and Saul, 13.

“You look up straight away and think… Wow. Yeah,” says Ramonteu. He’s French, possessed of one of the great beards of our time, and so this assessment is underscored with Gallic emphasis and enthusiasm. “Wah-how! Yee-Ah!”

It’s such a striking space, almost an old-fashioned formal lobby, though the family keeps a dining table off to one side. “It’s the centrepiece,” says Galloway. “You’ve got the bedrooms up top. There are no walls really – it’s all centered around this stairwell, which creates the division in the whole house.”

“Everything connects,” says Ramonteu. “It’s all open within. It’s like a community house. But when you live in a family with young children, and you want to read and they are being naughty…”

He smiles. “There is no escaping the children. And so I say: ‘Kids. Listen to my music.’ They are not so keen on that.”

On cue, Saul interjects from another room with an unenthusiastic evaluation of PJ Harvey. Galloway laughs, shakes her head. “Where were we? Yes. I love the skylight and all the glass. You really get the sense of the changing seasons in this house. Every room opens to the outside. And every day the light is different.”

Light, love, laughter: this house resounds with it. The architect would be pleased. In ‘Woolsheds, Houses, and People’, a 1973 interview in the literary journal Islands, Scott said: “When you come away from a building and feel pretty excited, not because of the building, but because of something that has gone on within you while you were in that building — then you are getting pretty close to architecture.”

This story starts two decades ago. Galloway and Ramonteu were working together at Ngatarawa Wines in Hawke’s Bay. Ramonteu, armed with a Masters in Oenology from the University of Bordeaux, was on his OE. There was some back and forthing to France before the couple settled in Te Awanga, the coastal village that sits between Napier and Hastings. They found an old cottage to pour their heart and soul into; they found their tribe. Work was going splendidly: they’d set up two boutique wine labels, Alluviale and Dada, and most years would head to France to work at Domaine Cauhapé, the wine estate that has been in David’s family since the 14th century. Two kids materialised: there was little time for much else, save attending the odd John Scott open home to ooh and ah.

“We never intended to buy this place,” says Galloway. “But I’ve always been drawn to John Scott’s architecture and I had a Google alert to say a house on Toop Street was coming up.”

First impressions? “It was really Havelock Northified so everything was beige. It was also darker than our house in Te Awanga. It was late winter and, of course, this house changes with the season.” 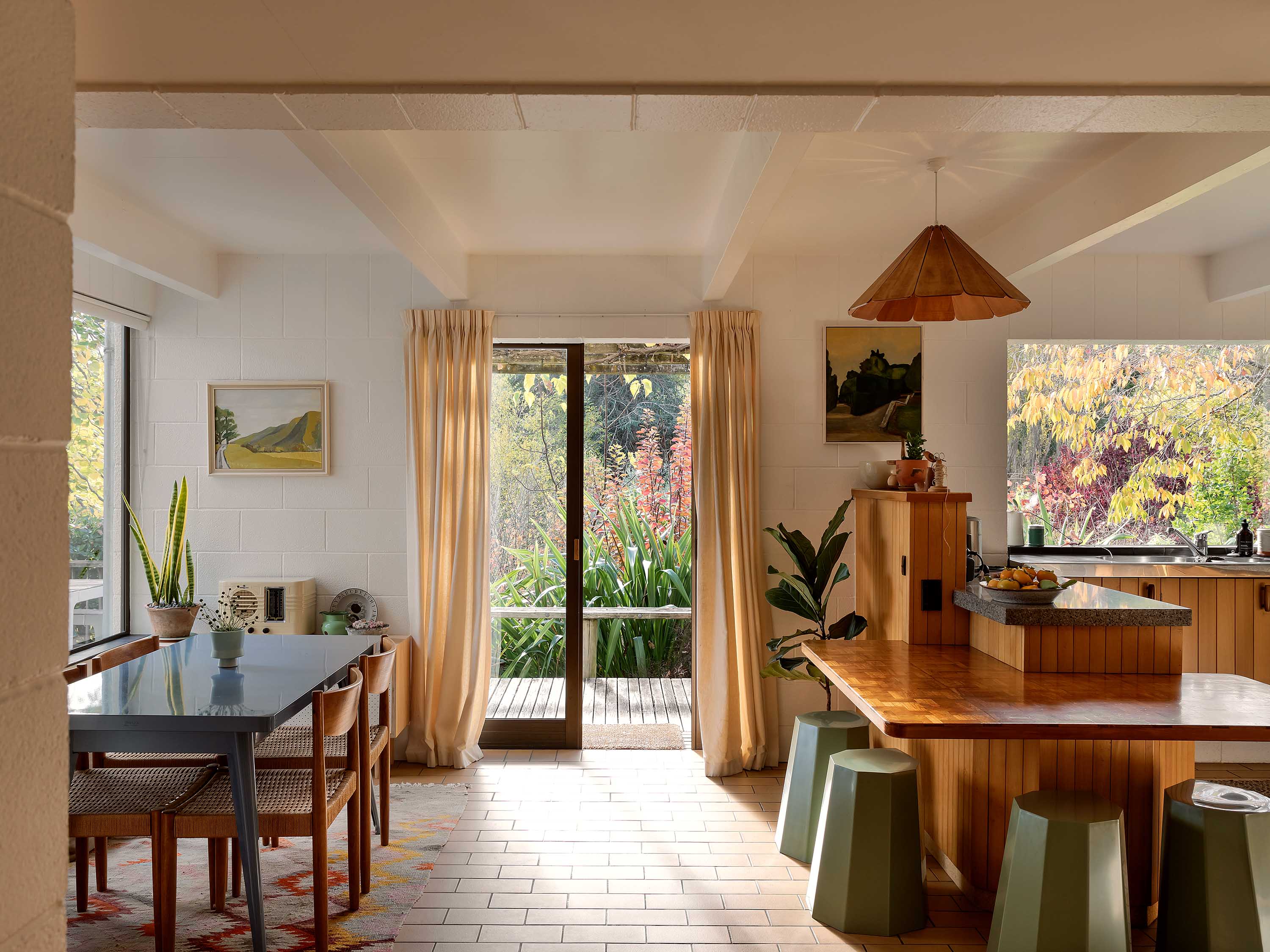 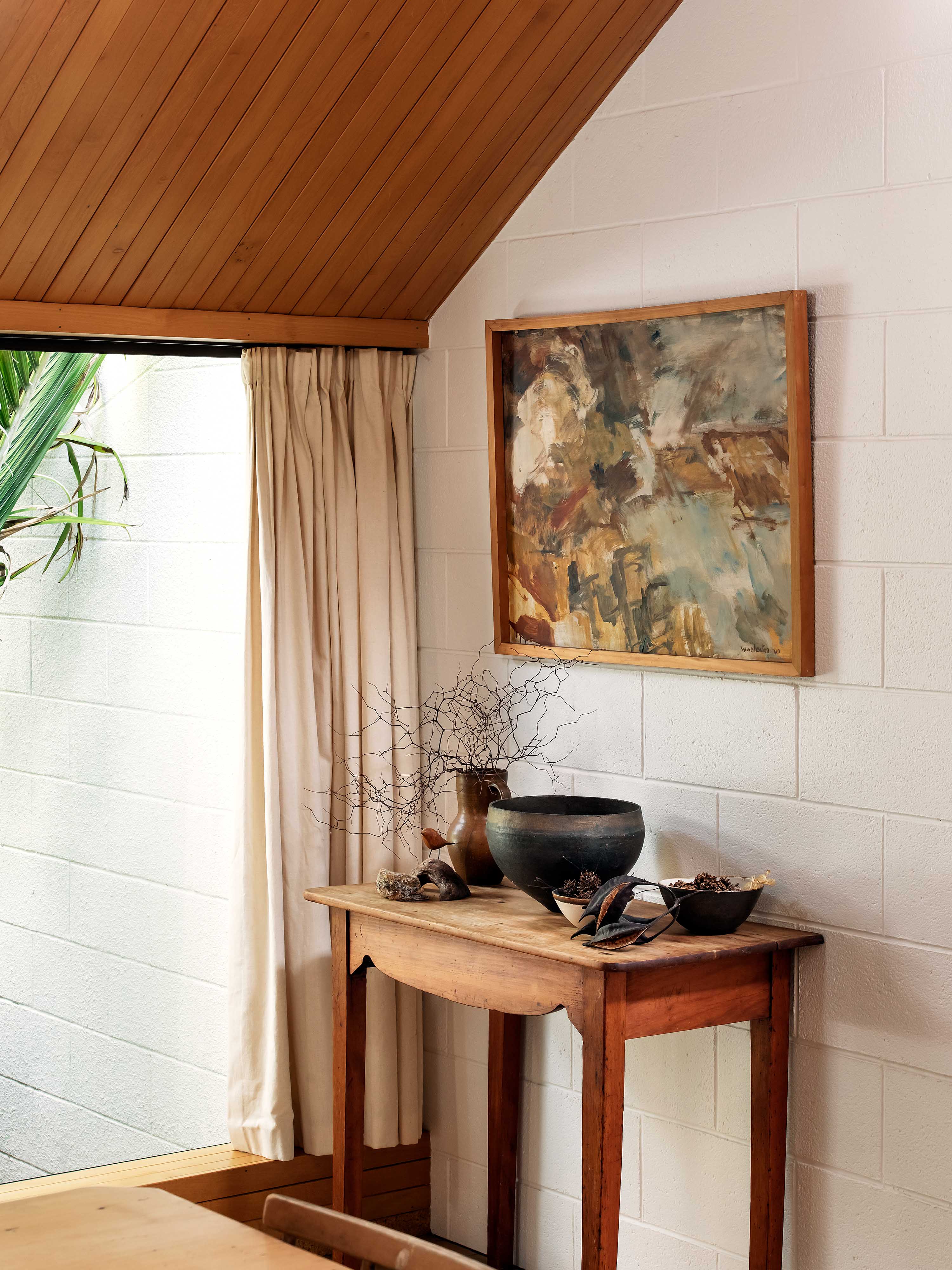 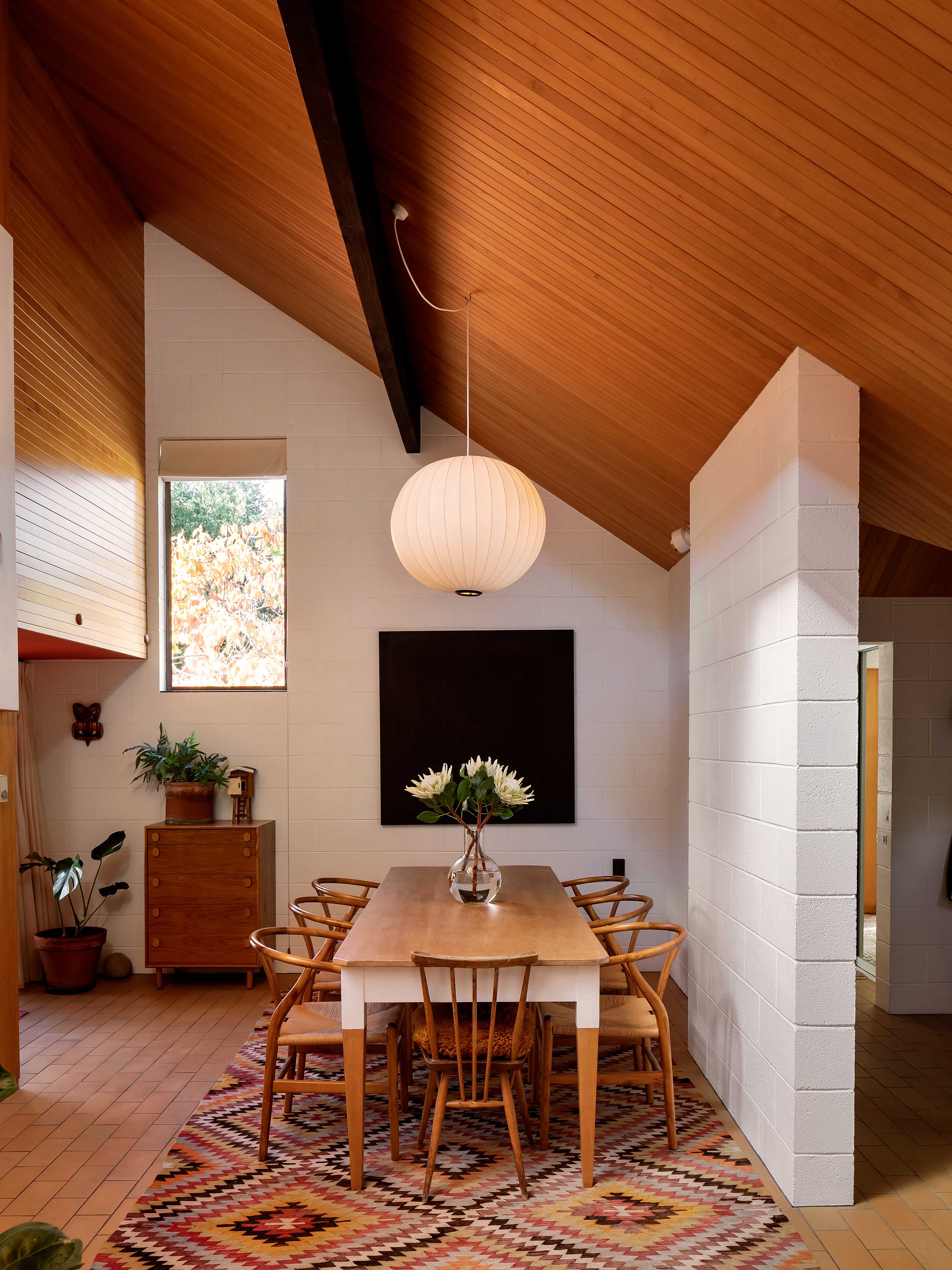 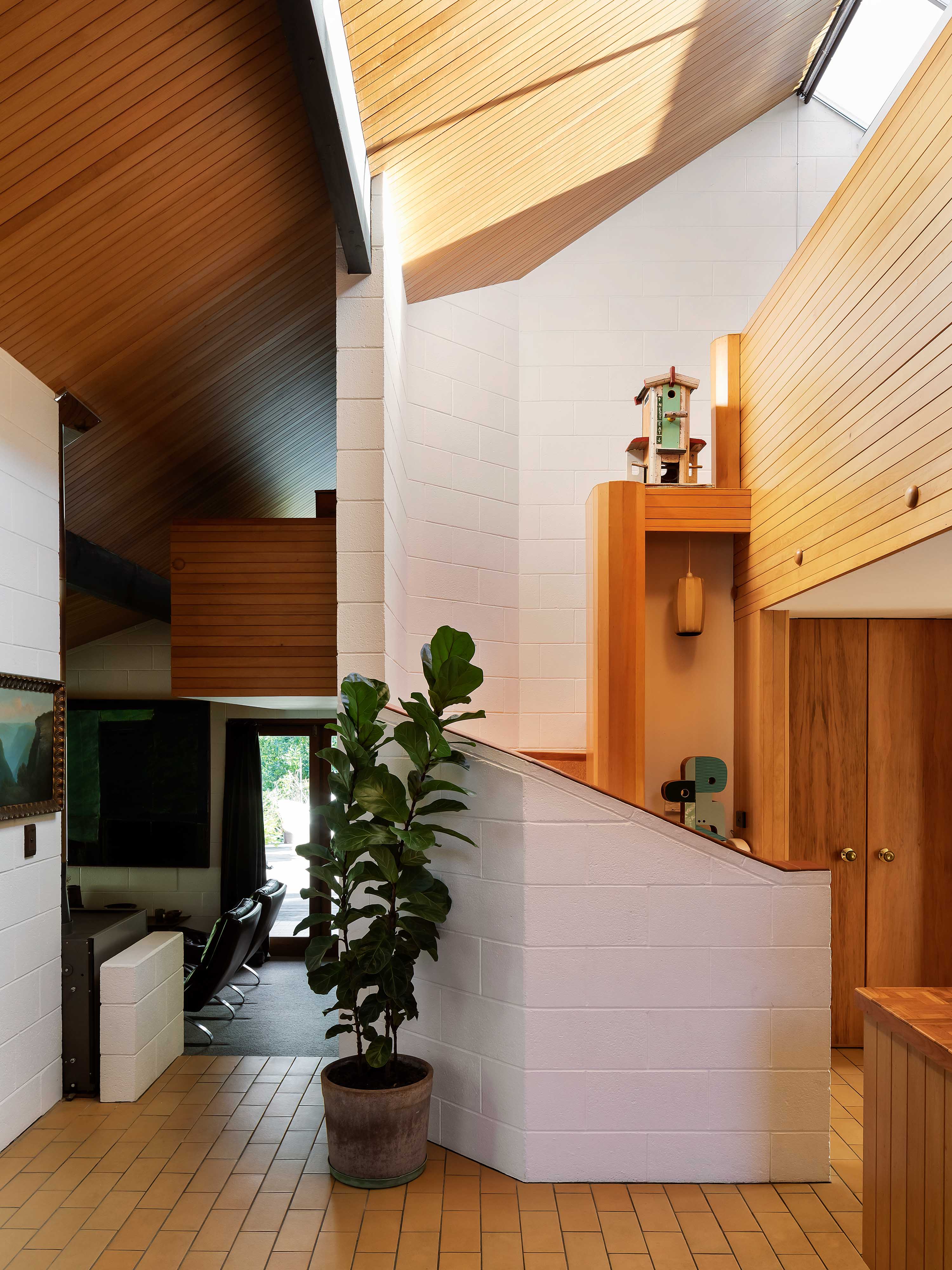 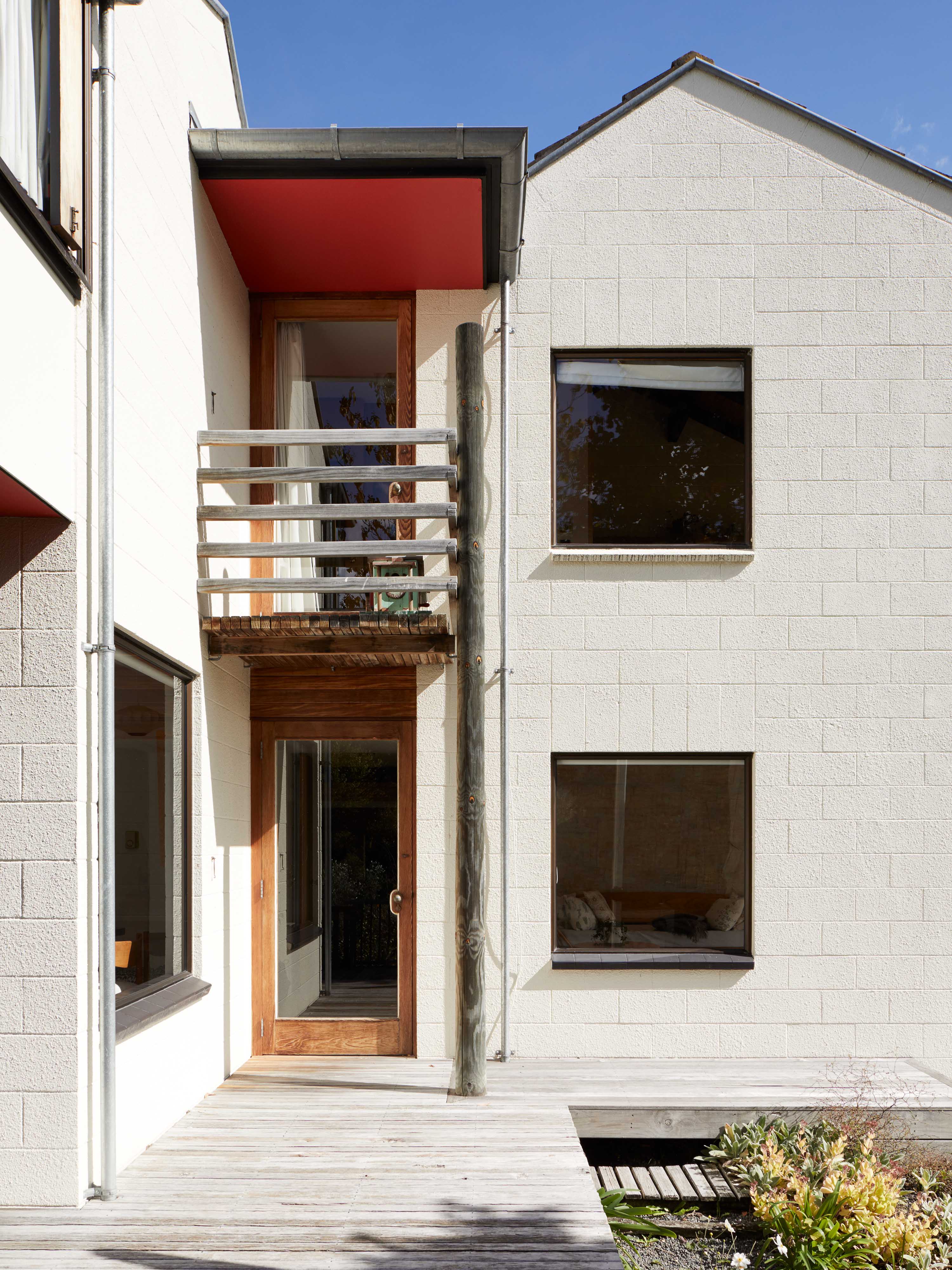 Like most Vaughan visitors, they were distracted – transfixed – just a few steps inside the front door. They stared up at the skylight, watched how the sun hit the walls, how the light shifted and shuffled. In a bit of a daze, they made an offer. It was accepted.

There are dozens of John Scott houses throughout his Hawke’s Bay homeland, seven alone on Toop Street, at the foothills of Te Mata Peak. The Vaughan House was built in 1985, late-era John Scott, seven years before his death, aged 68. “He wanted this to be a kind of model community,” says Galloway, “so the houses are close. But orientation is such that, though we’re nearby, we’re not looking in on each other.”

Spend an evening with the owners and you realise their home echoes their personalities: it’s bold, creative, idealistic – a little quirky and unconventional in places – but also incredibly precise, with fierce attention to detail.

Take a tour now to the titular ‘winter lounge’, hot stove blazing, a sunken space a couple of steps down from the grand lobby. It’s a geometric wonder. A pentagon apex centres the room. But it’s the huge corner window and wrap-around window seats that catch the eye.

And this window probably does all that, but mostly it beckons you to come over, slip your shoes off, read for a while or doze off in the sun. It’s a favourite spot for the couple (Galloway is reading John Steinbeck’s East of Eden, Ramonteu the essential works of Rudolf Steiner).

Continue the tour. You look up again – you always do here – and see a mini mezzanine overhanging the lounge. It’s Galloway’s sewing space, “a total mess” she says, though this house of nooks hides such sins.

When Ramonteu shows you his favourite feature, you realise this couple was destined to be here. But first a quick story about craft and precision. In 2015, the couple stopped making wine and started down a path that’d see them set up Hastings Distillers in 2019 – and win a gold medal at the International Wine and Spirits Competition (IWSC) just eight months later. Their Albertine Gin contained 38 organic botanicals – “fruity, refined and fragrant,” rhapsodised the judges.

It was a remarkable achievement. But more noteworthy was their journey to get there – the building of an olfactory library that contains more than 300 botanicals. “We started from scratch,” says Ramonteu. “We wanted to learn, we wanted to discover. Kate’s really good at foraging so she would find something that might be interesting, and we’d try it, taste it. It took us a long time.”

Three and a half years to be exact. You see, detail matters. “Look at these nails,” he says, pointing at the brass head tacks that hold the rimu panels in place beside the main stairs. “They’re all exactly in the right place. Perfectly straight, in a perfect line. And look at how the head of each sits just above the surface. The precision, the detail, the craftsmanship – it’s incredible… you don’t get that anymore.”

He runs his fingers along the line, caresses the wood. “I wanted to study philosophy and architecture,” he says. “But it wasn’t to be: I had to be a farmer, a winemaker. I was born into that. But you know, I love this place. I think it’s very special.”

We are incredibly lucky to be its owners he says, before correcting himself. “No. We are its guardians. So you have you have to look after it. It’s a piece of history.” 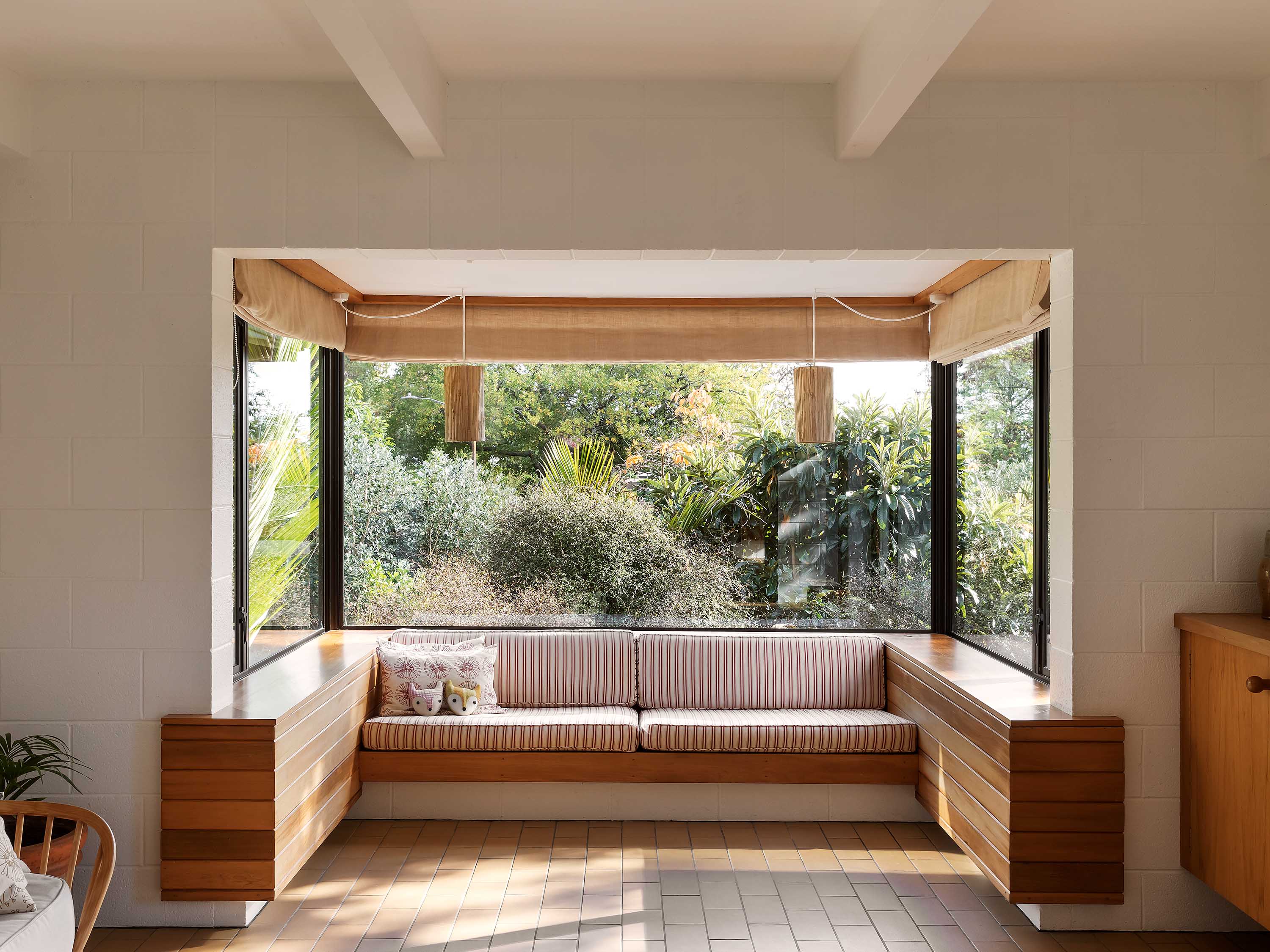 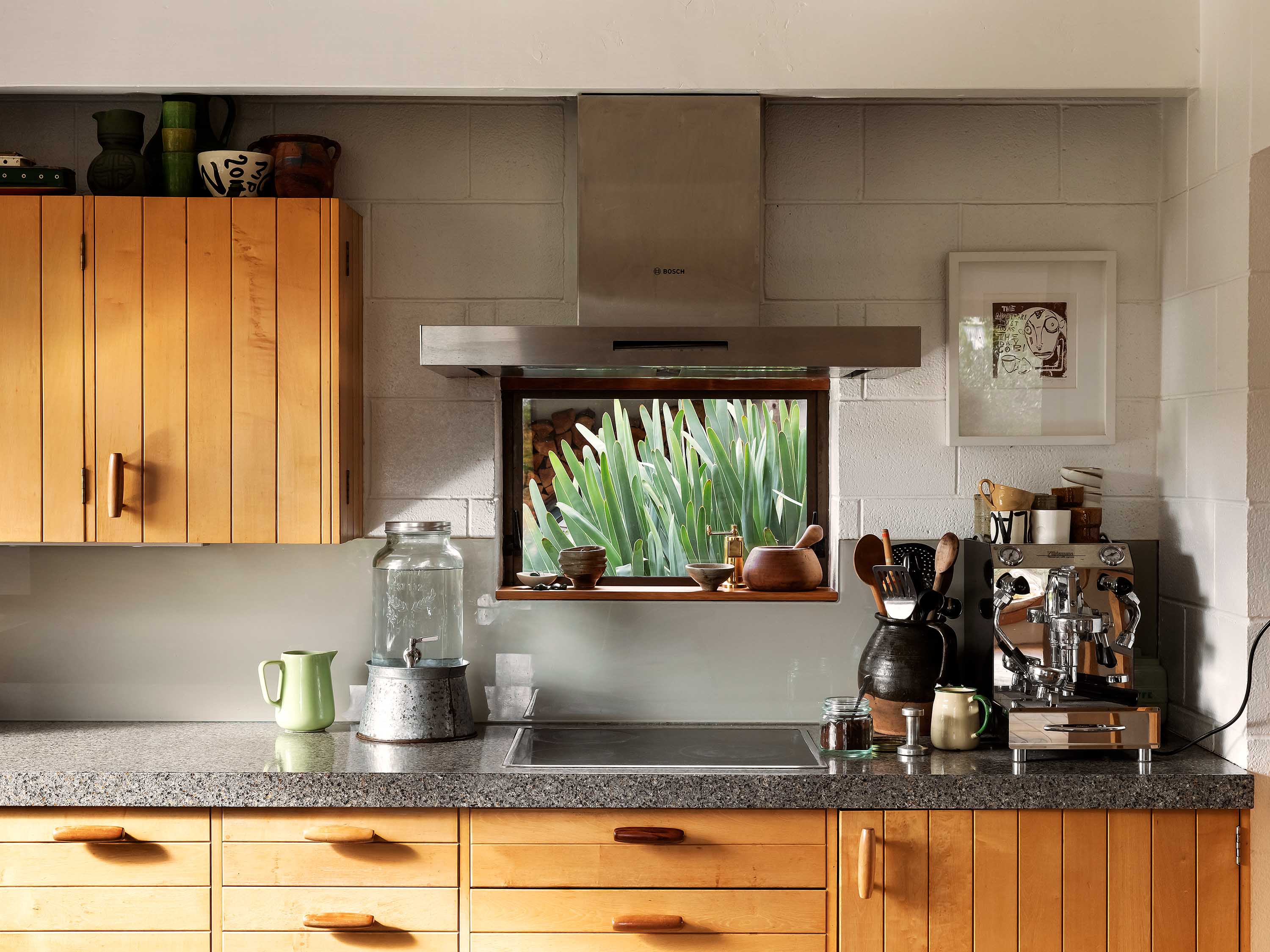 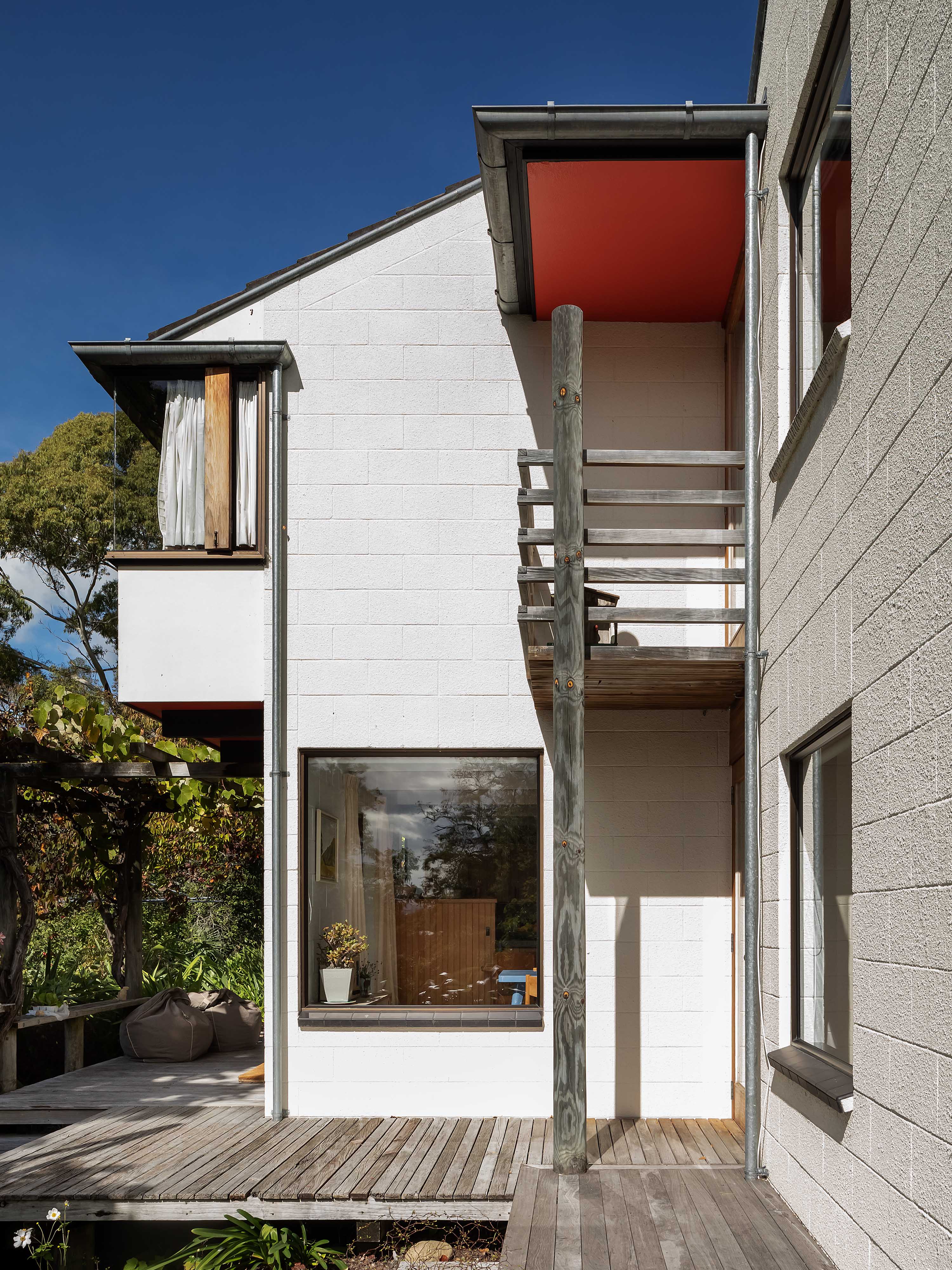 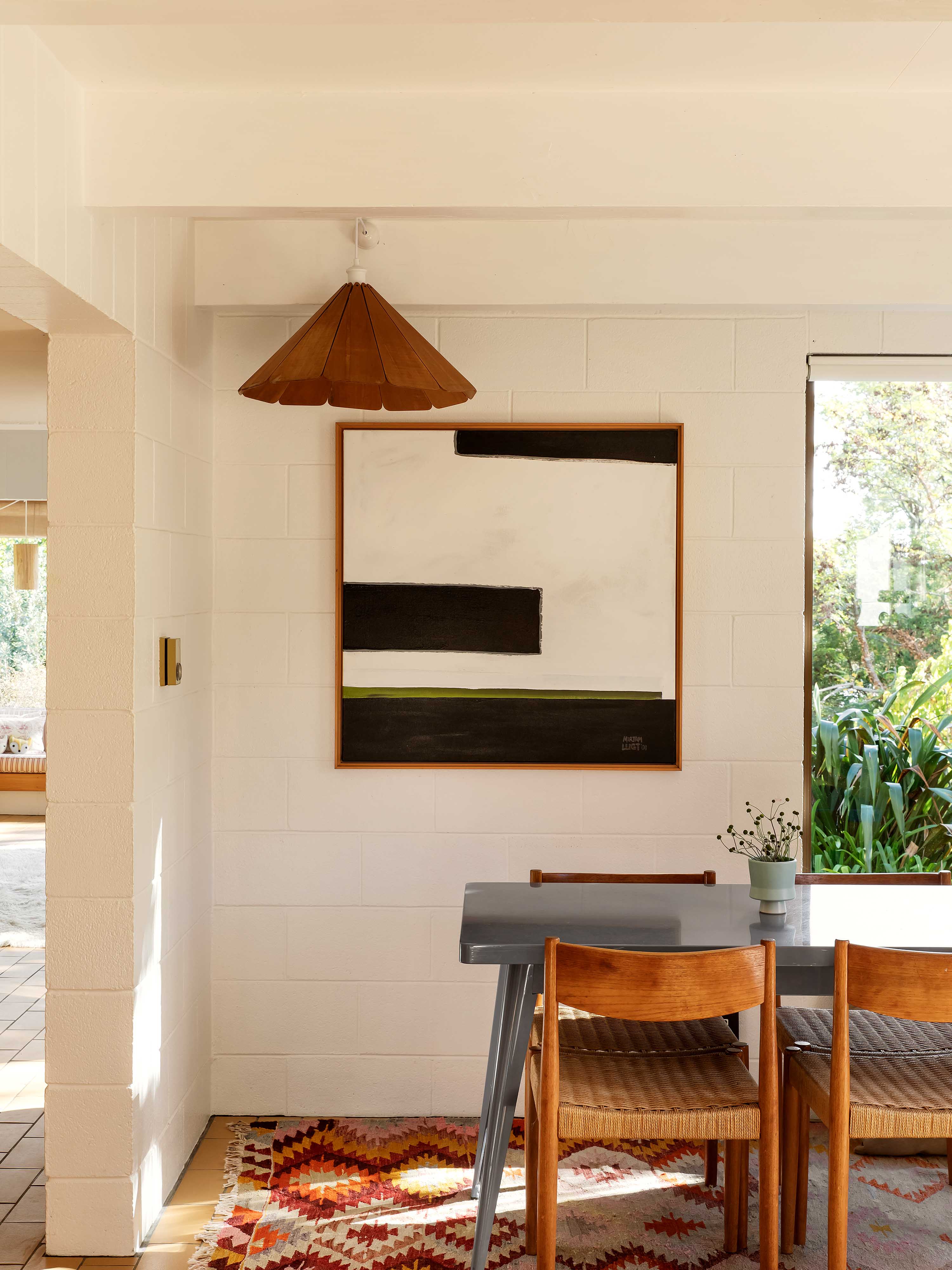 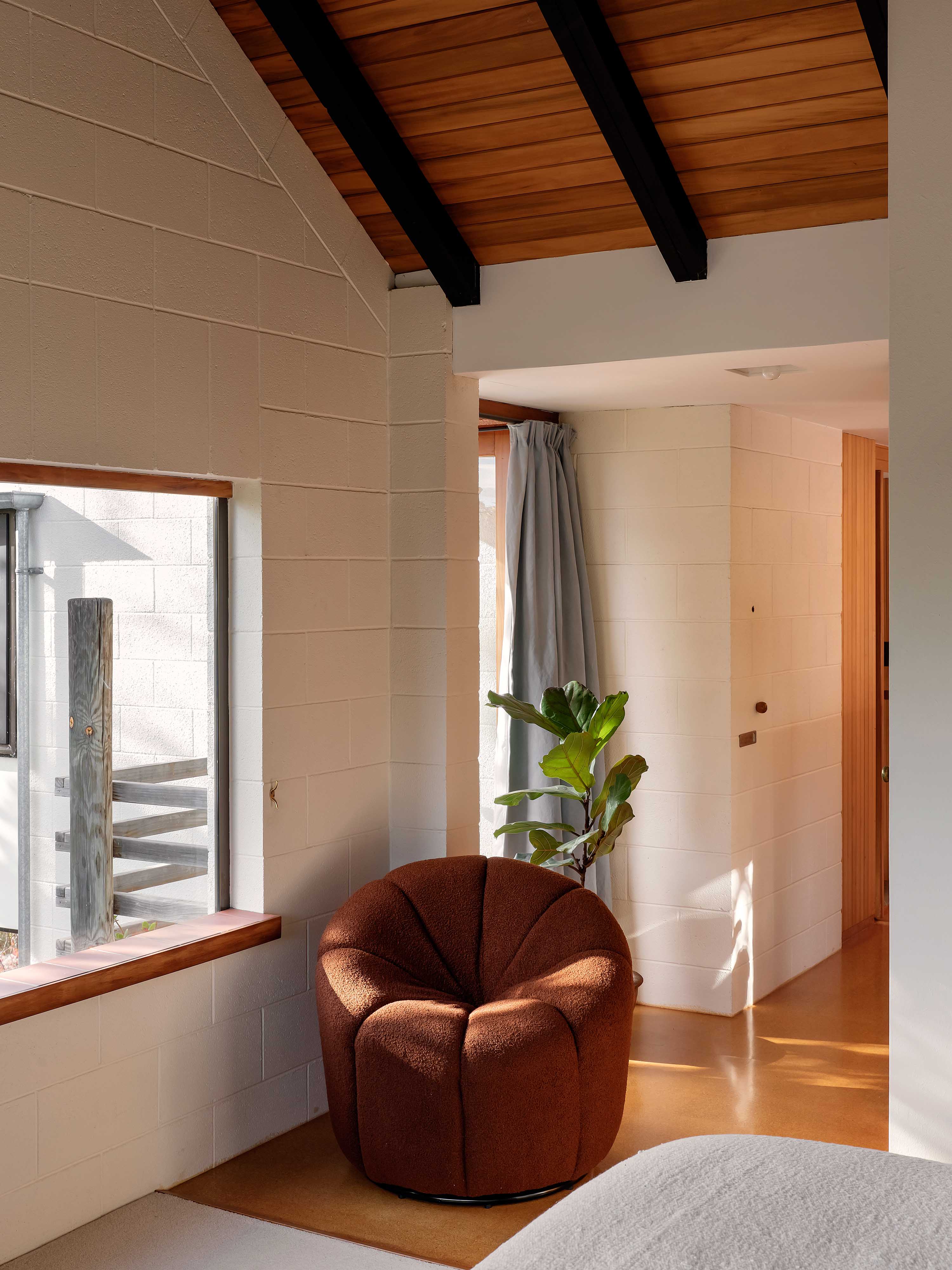 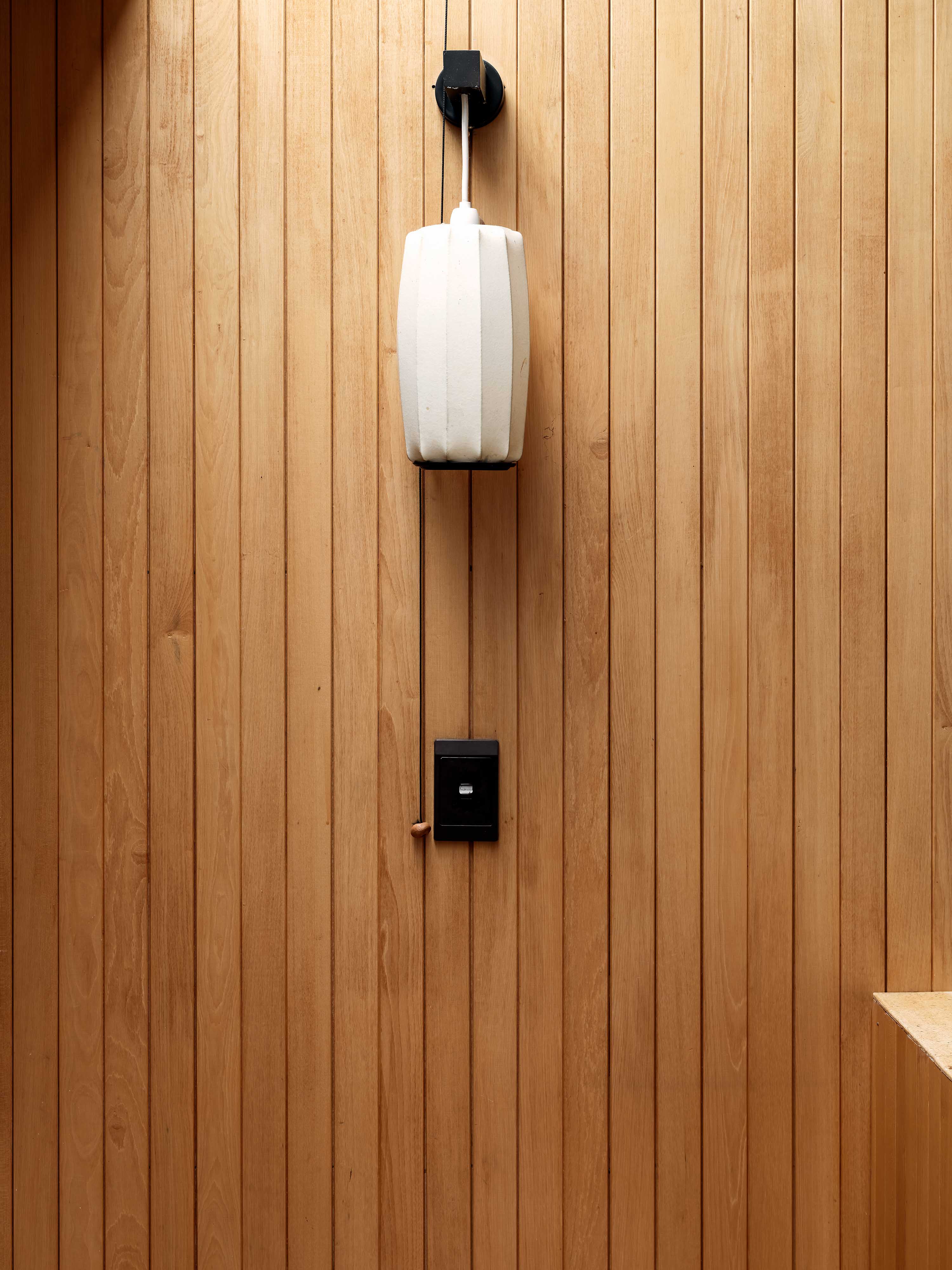 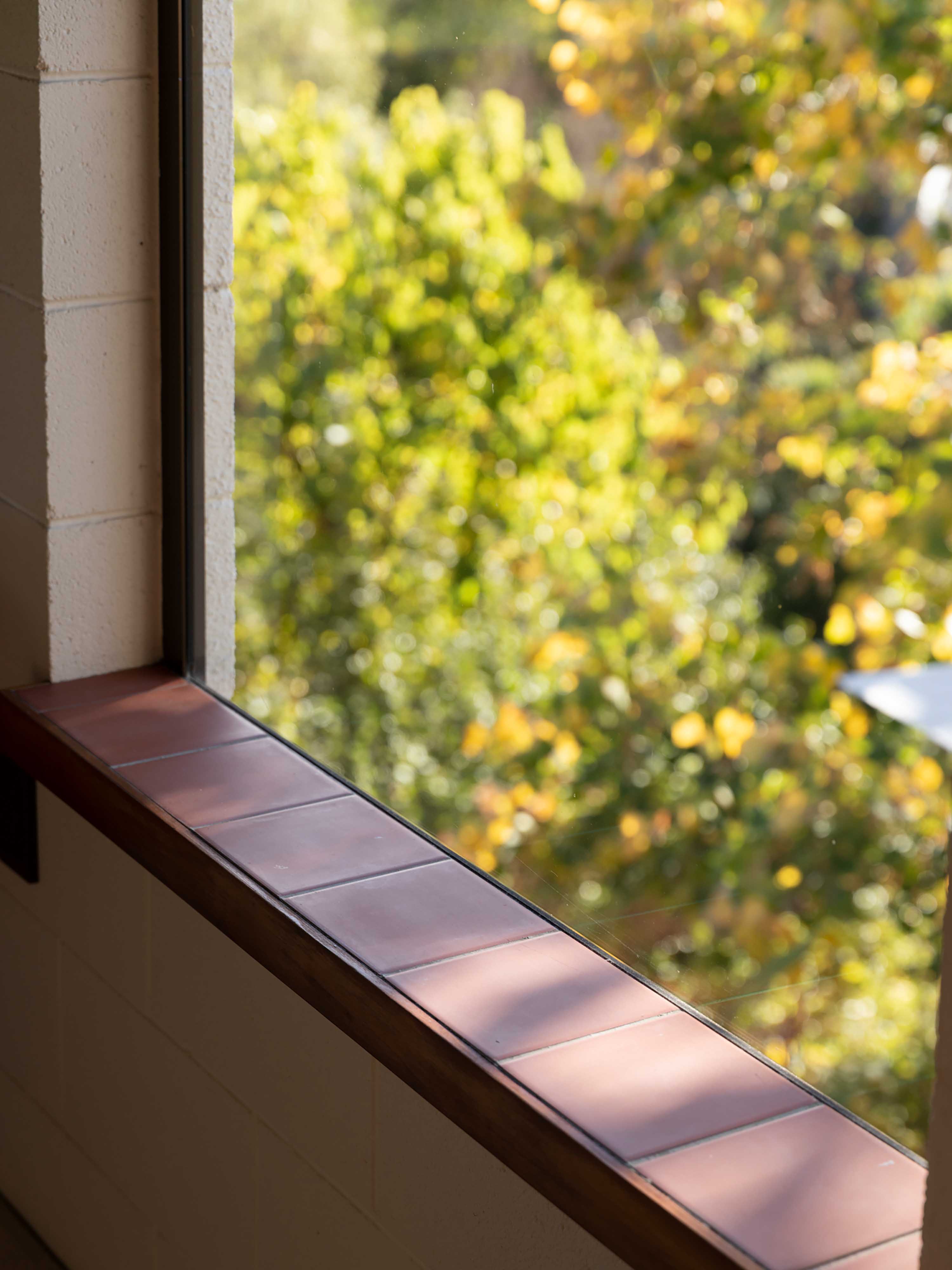 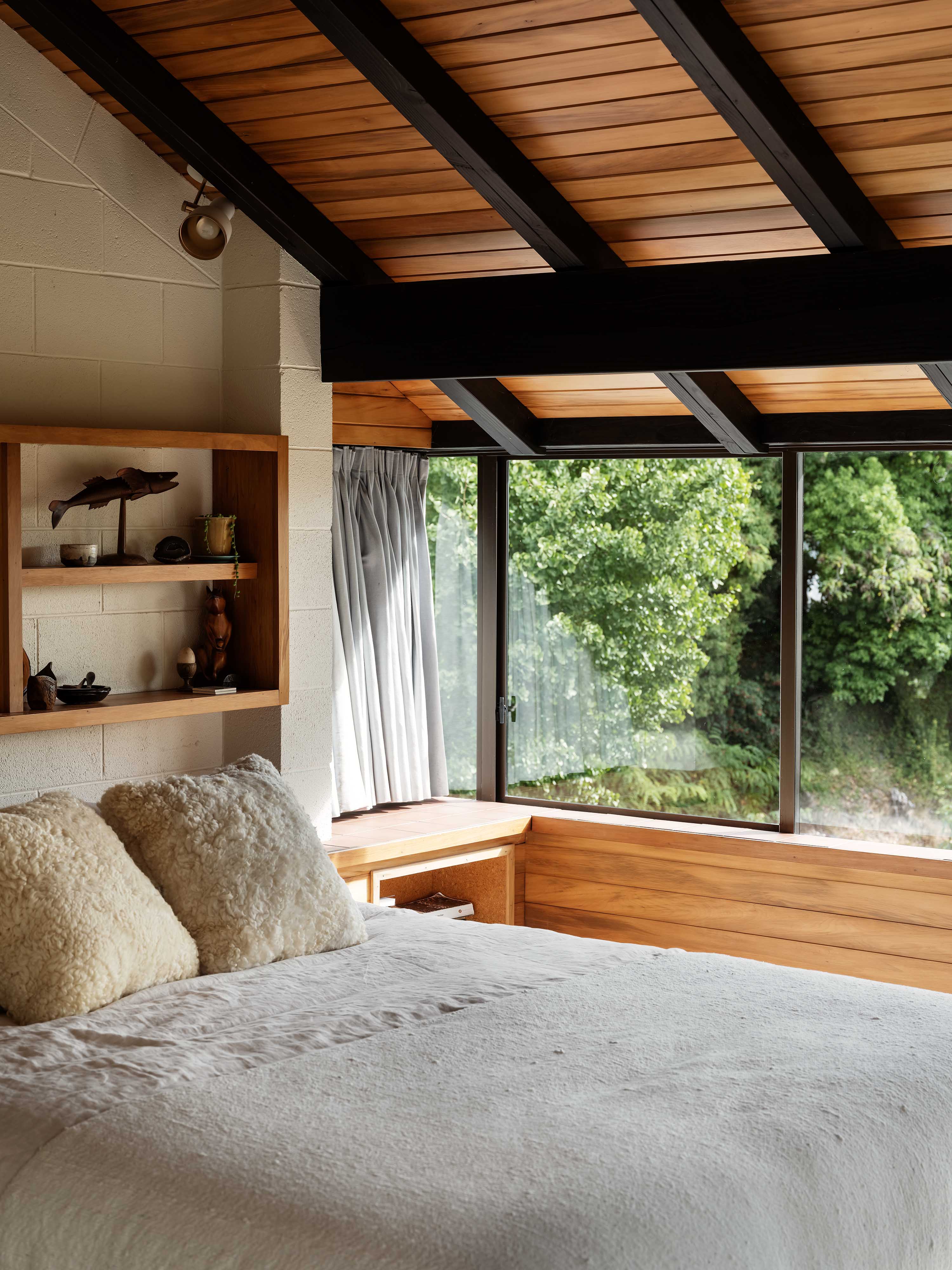 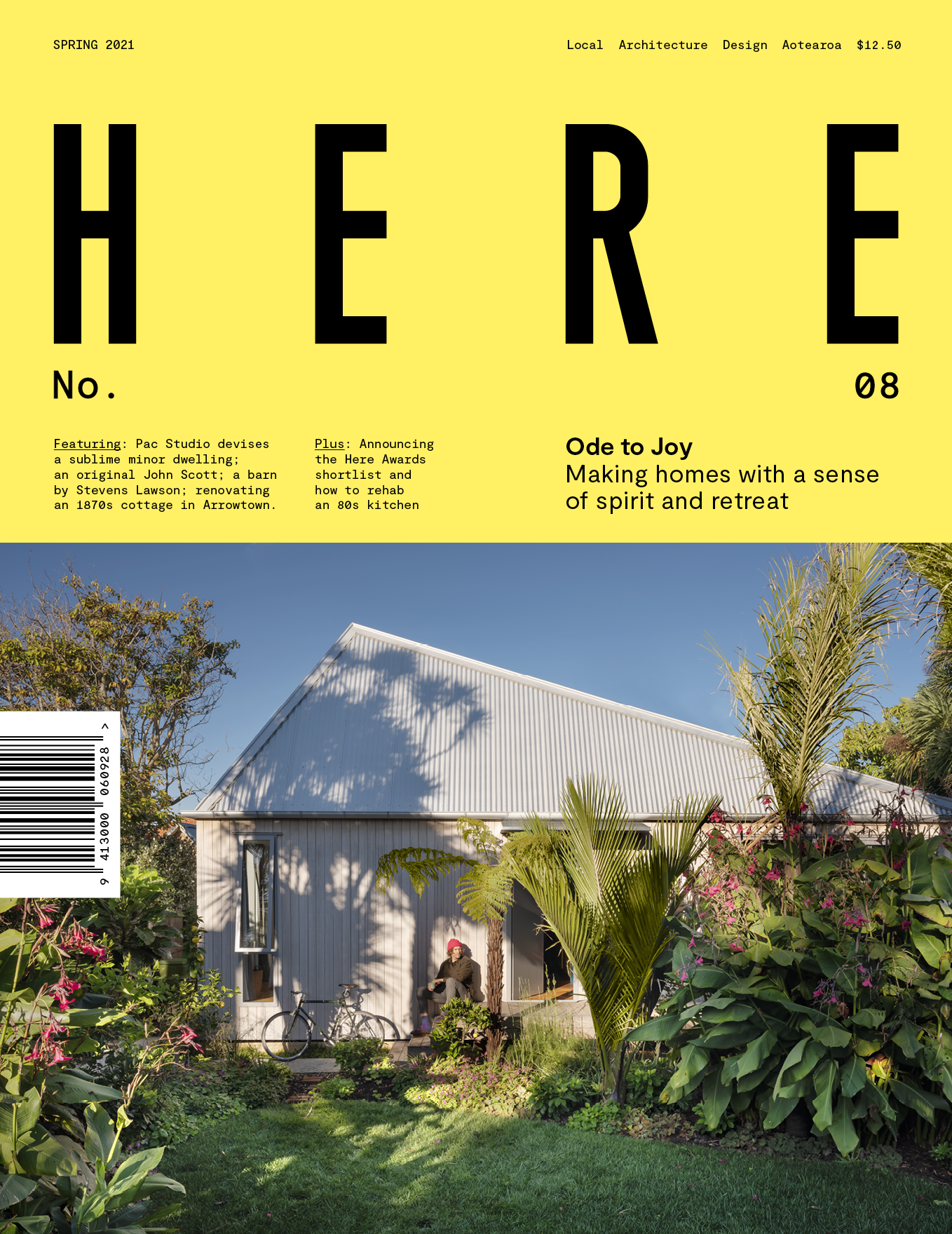