Over 20 years and multiple small projects, Pete Bossley and Miriam van Wezel have turned a prosaic bungalow into something very special. 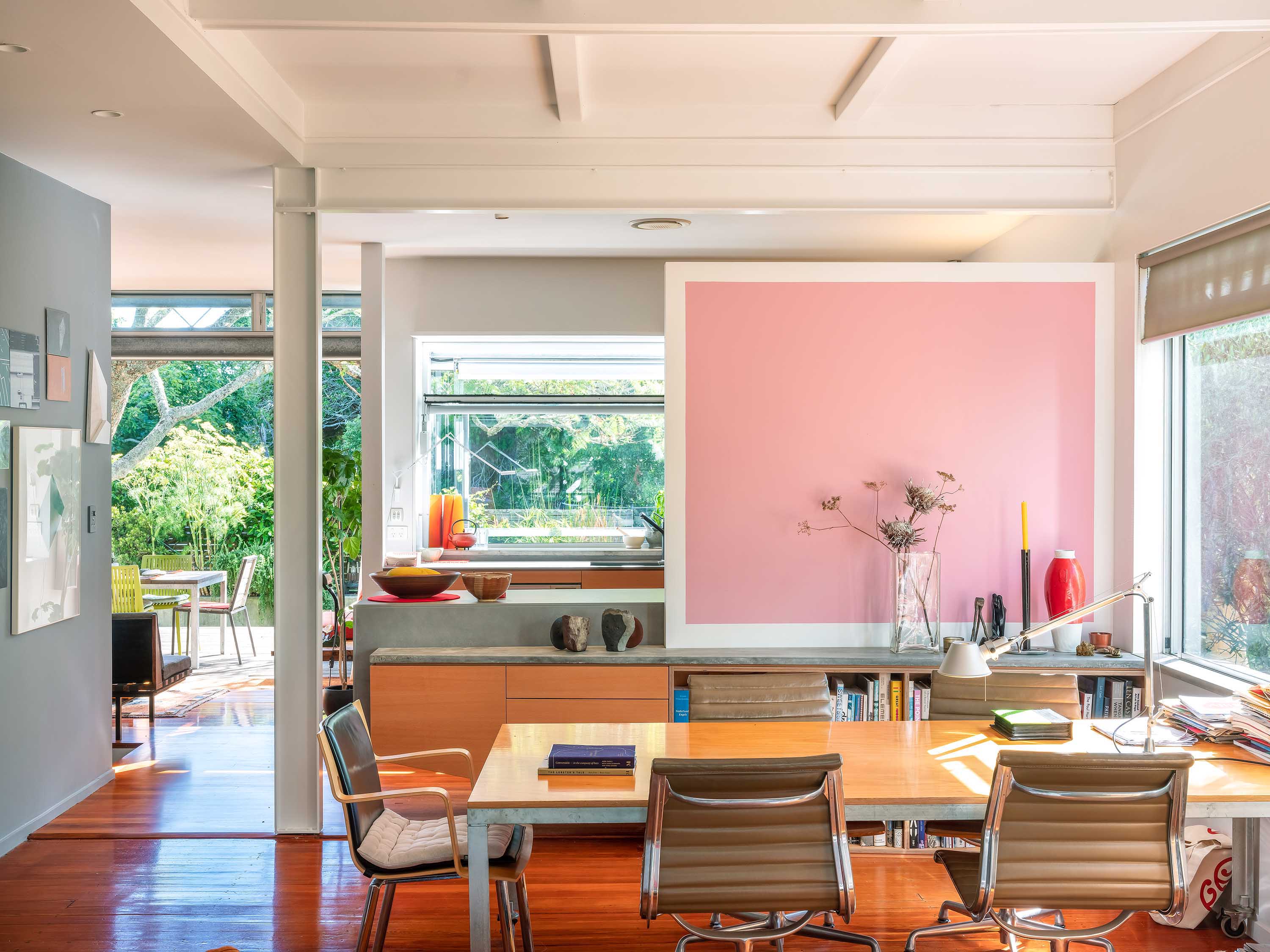 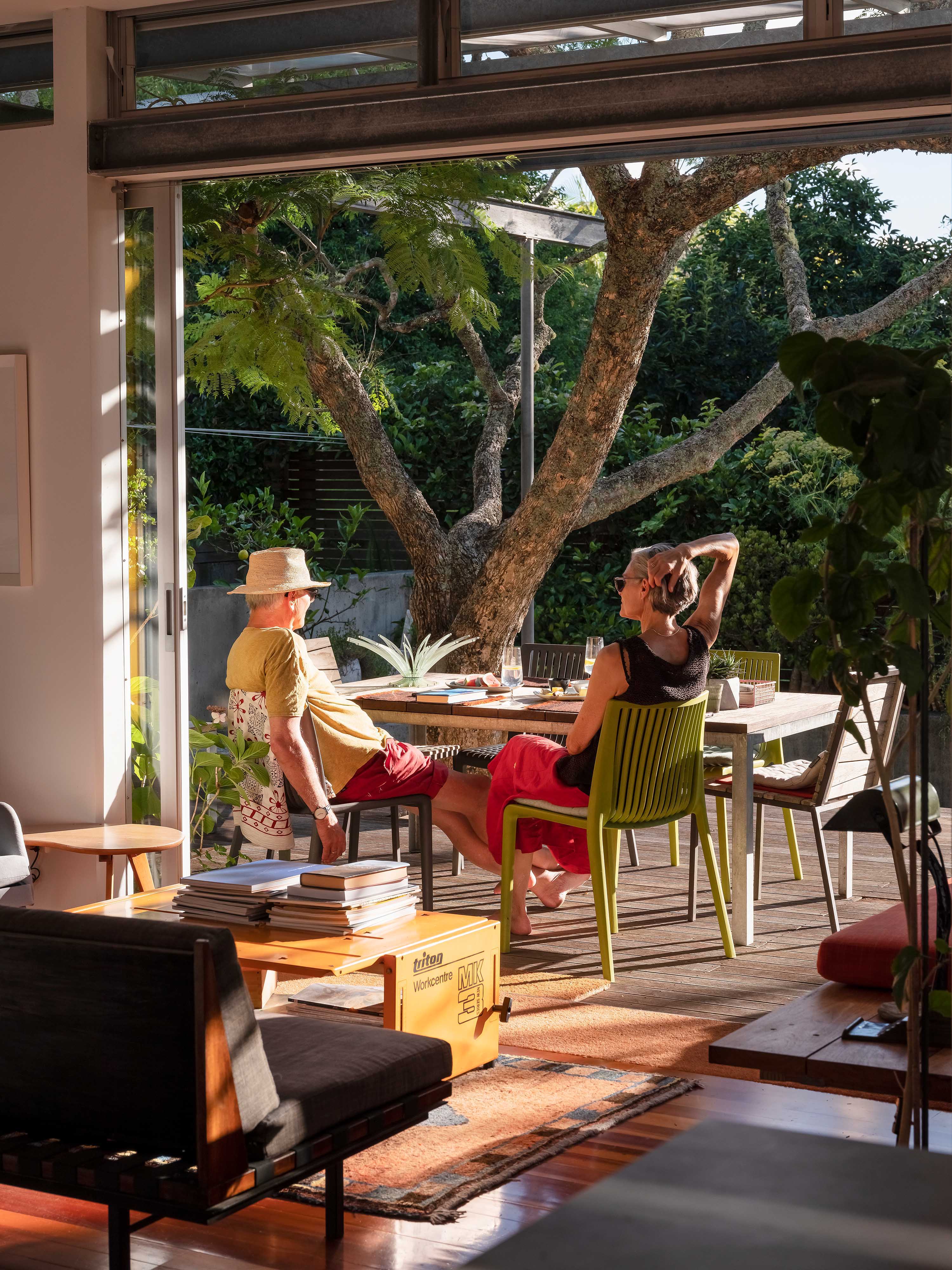 Some time ago, though he can’t remember exactly when, architect Pete Bossley designed a wall of cabinetry for the bedroom he shares with his partner, artist Miriam van Wezel. At some point, he realised the door of the bedroom would open onto the cabinetry. Eventually, he decided the best way forward was to cut a handle-shaped hole into the face of it. “That’s my favourite detail,” he says, grinning, demonstrating how the door handle fits effortlessly into the cavity.

Bossley and van Wezel live in a 1940s bungalow in Westmere, Tāmaki Makaurau Auckland. Or at least, it started as a 1940s bungalow, and has slowly morphed into something unique and personal over 20 years and multiple small, finely detailed projects that have operated as a sort of testing site for Bossley’s architecture practice, a process he calls “loving iterations”. A window box here, a new deck there; the biggest job was digging out under the house to create a studio, bedroom and laundry space. The house has gone from three bedrooms to four, and then back to three, and its distinctive facade has slowly morphed into something decidedly contemporary “without”, as Bossley puts it, “ever having an end-game in sight”.

On the back deck, a sliding door extends past the edge of the house on a track suspended in mid-air; the I-beams of the pergola are wound through the limbs of a huge old jacaranda. The kitchen window features a motorised screen that winds down to filter the afternoon sun. The base of the kitchen island angles up to reduce its weight, the floor sliding underneath it. In the front courtyard outside the studio, steel cables support a huge star jasmine, an idea Bossley nicked from the courtyard of Peggy Guggenheim’s home in Venice; the cables attach to a steel frame that sits on top of a concrete wall with small, angled viewfinder holes in it.

“It’s not until we feel absolutely resolved that we go ahead,” says van Wezel. “Pete does another iteration or we have an idea and slowly, slowly it feels right.” The result is a nuanced house that is completely different to what it would have been had they done everything at once – though there is barely a wall, window or elevation that remains untouched. “Being European, I really like working with an existing fabric,” says Dutch-born van Wezel. “The original house is really quite old, and there are still elements of it in the floor, in the ceiling. It creates a richness you otherwise wouldn’t have.”

You come up the drive past established planting, the house screened in summer by an enormous silk tree that stretches from boundary to boundary, and you walk up generous concrete steps to the front door – a traditional way of approaching a bungalow, but a very contemporary take on it. Most of the house is painted a gentle grey, apart from the tower, which is red; in places, a series of pop-outs are painted in solid blocks of green and blue – planes of colour that float in space, masking a window or, in one case, the fridge.

There are bedrooms either side of a squarish hall, which leads onto an open-plan living room running down the north side of the house. There are decks at both ends. Van Wezel works from a desk in the living space, as well as from the light, airy studio downstairs, and Bossley works from an open office at the western end of the upper level. Downstairs, there is also another bedroom and a bathroom.

The house looked very different back in 2002, when the couple first visited. At the time, they had been together for 10 years but had never got around to moving in with each other. Bossley lived in Freemans Bay, van Wezel in Titirangi; her two boys Bob and Troy were still at home and moving didn’t feel right. Then, one Sunday they were sitting in Bambina, a cafe on Ponsonby Road, when Bossley spied this place in the newspaper. The open home was in an hour.

It was a perfect blue-sky spring day and the tide was high in Coxs Bay. Originally built in the 1940s, the house had been reworked by Bossley’s former colleague Mal Bartleet in 1989. Though the interior was still a series of boxy rooms, Bartleet had cleverly created decks at either end of the house – an east-facing one looking over Coxs Bay with an unexpected view of the Chelsea Sugar works across the Waitematā, and a west-facing one looking over the garden. He’d also added a double garage below the front deck. 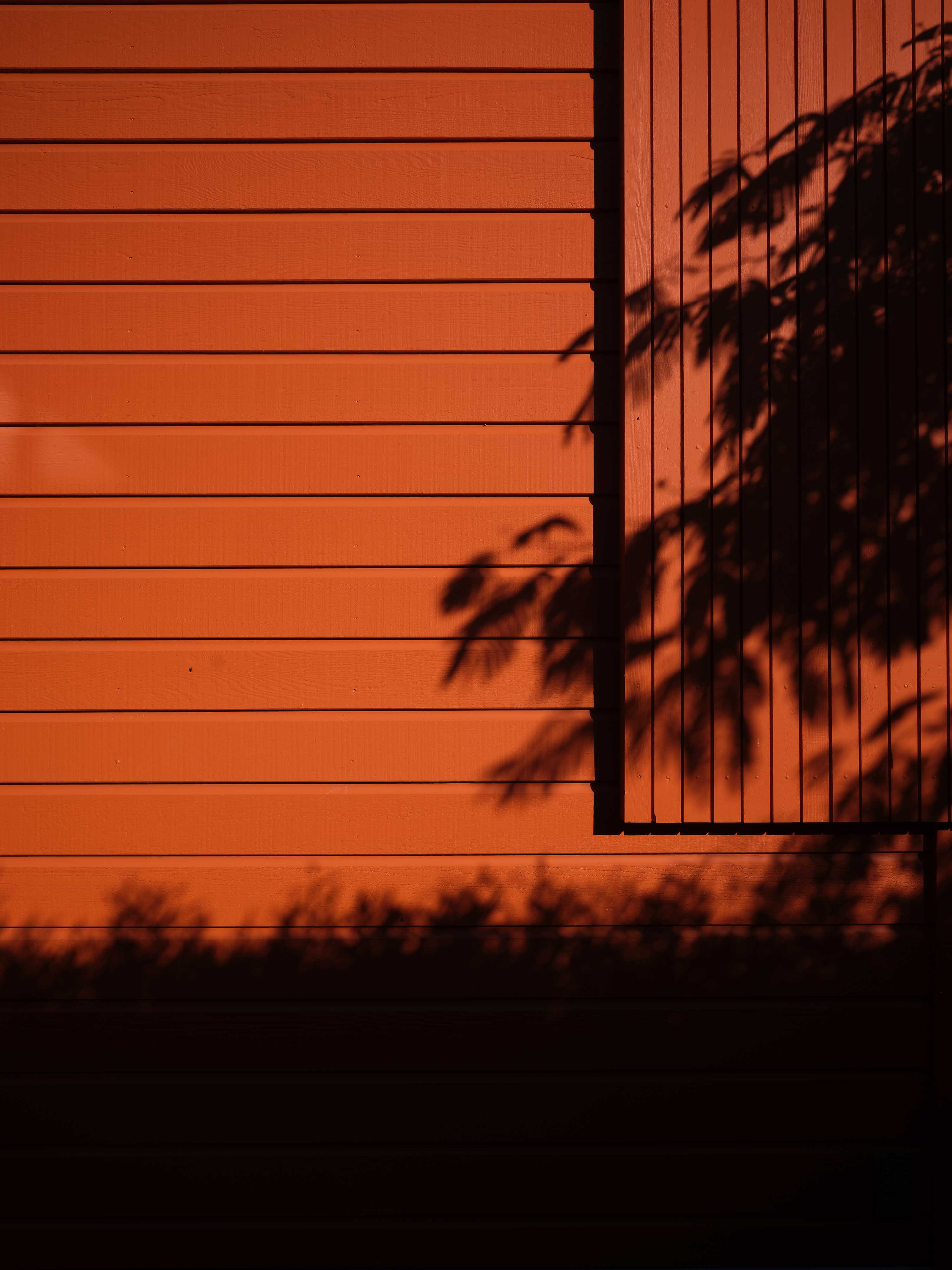 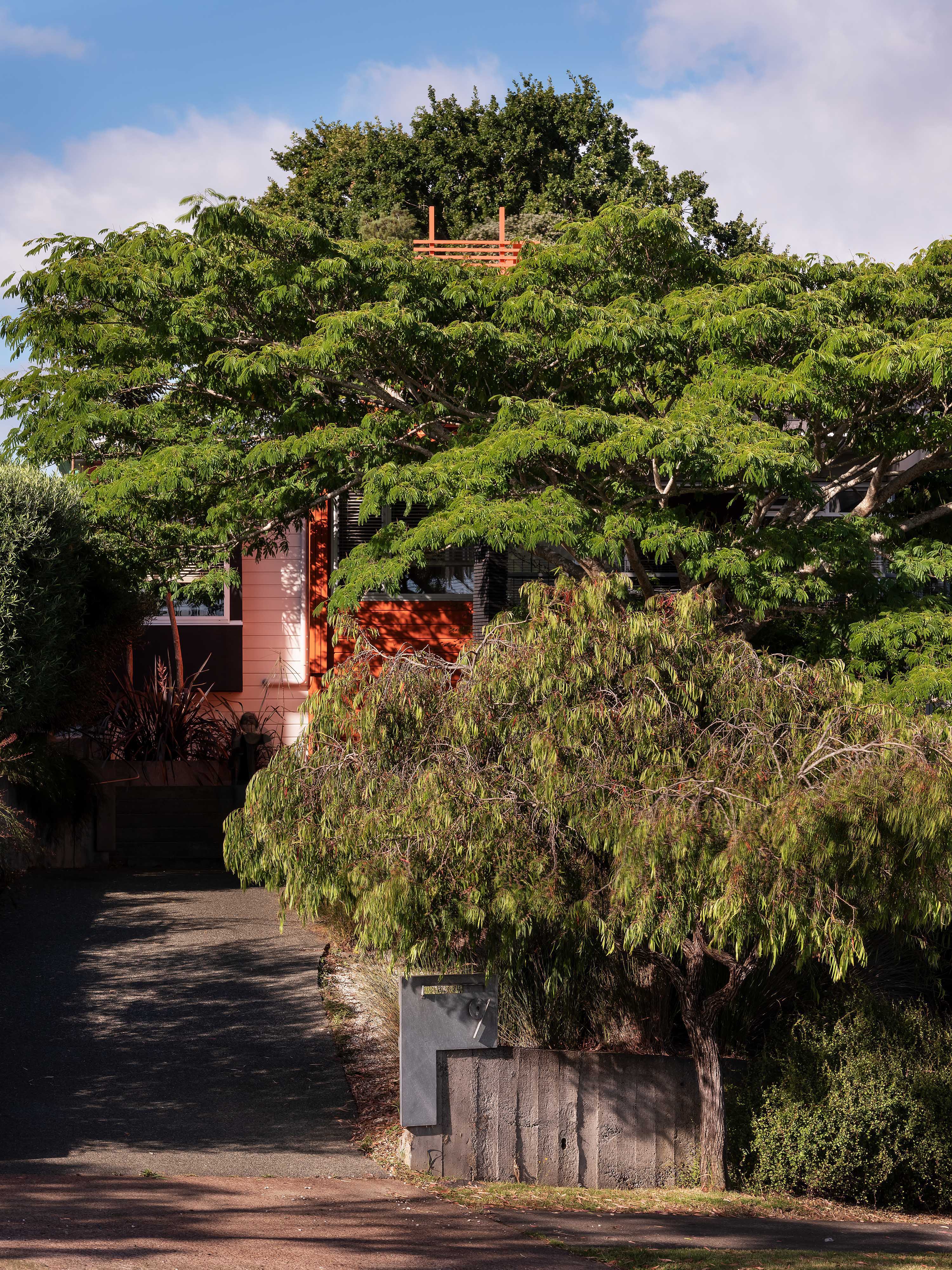 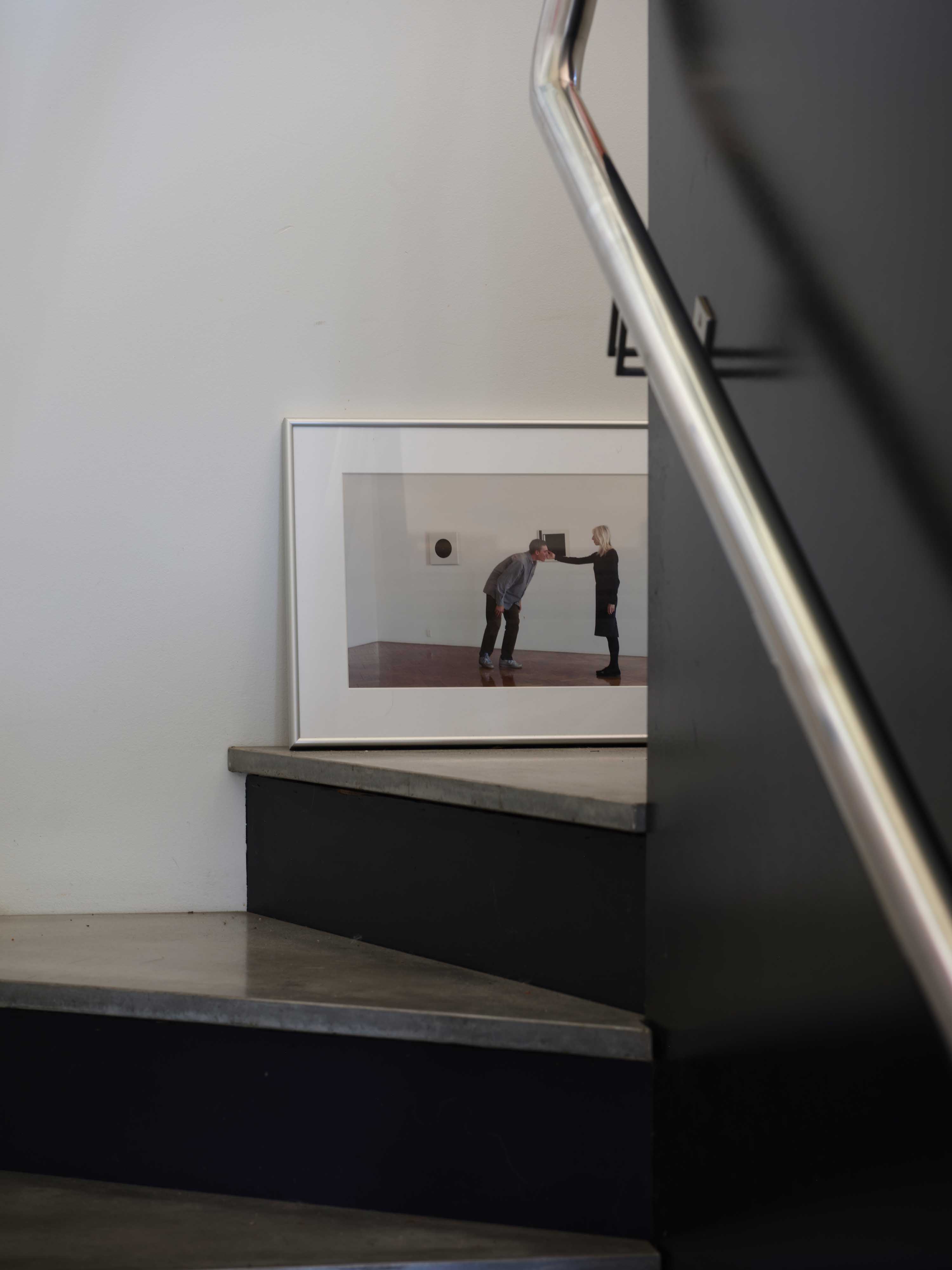 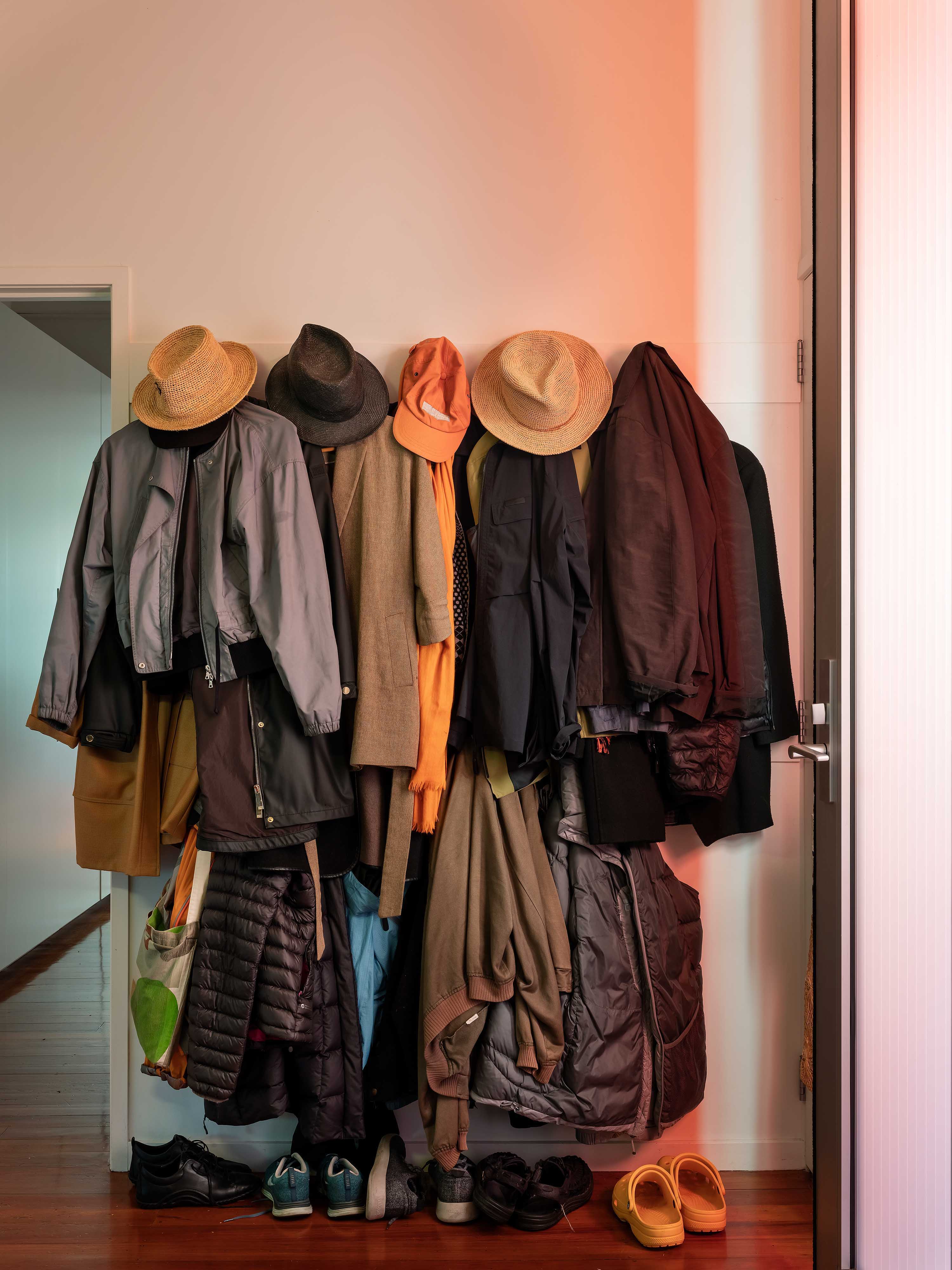 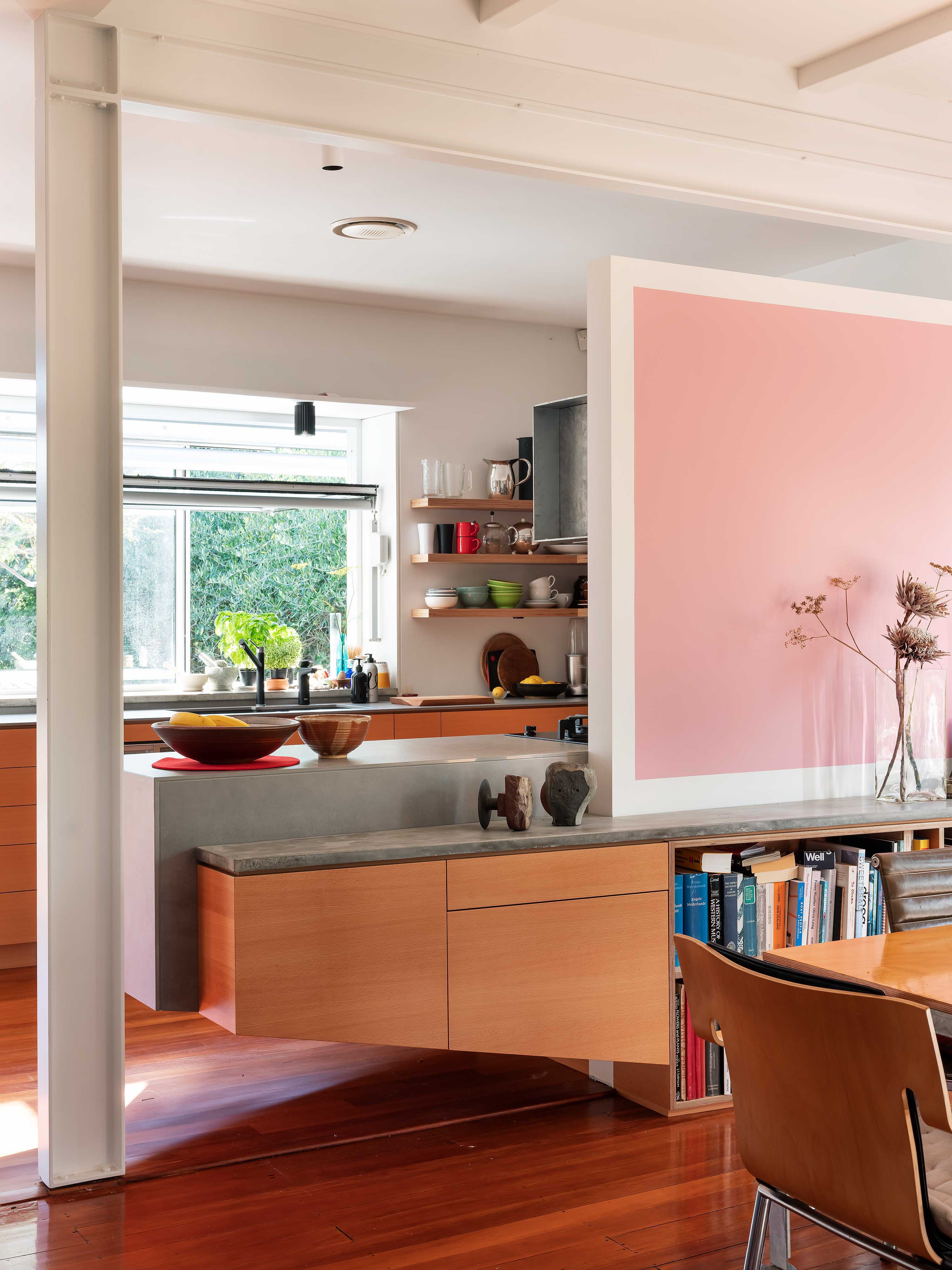 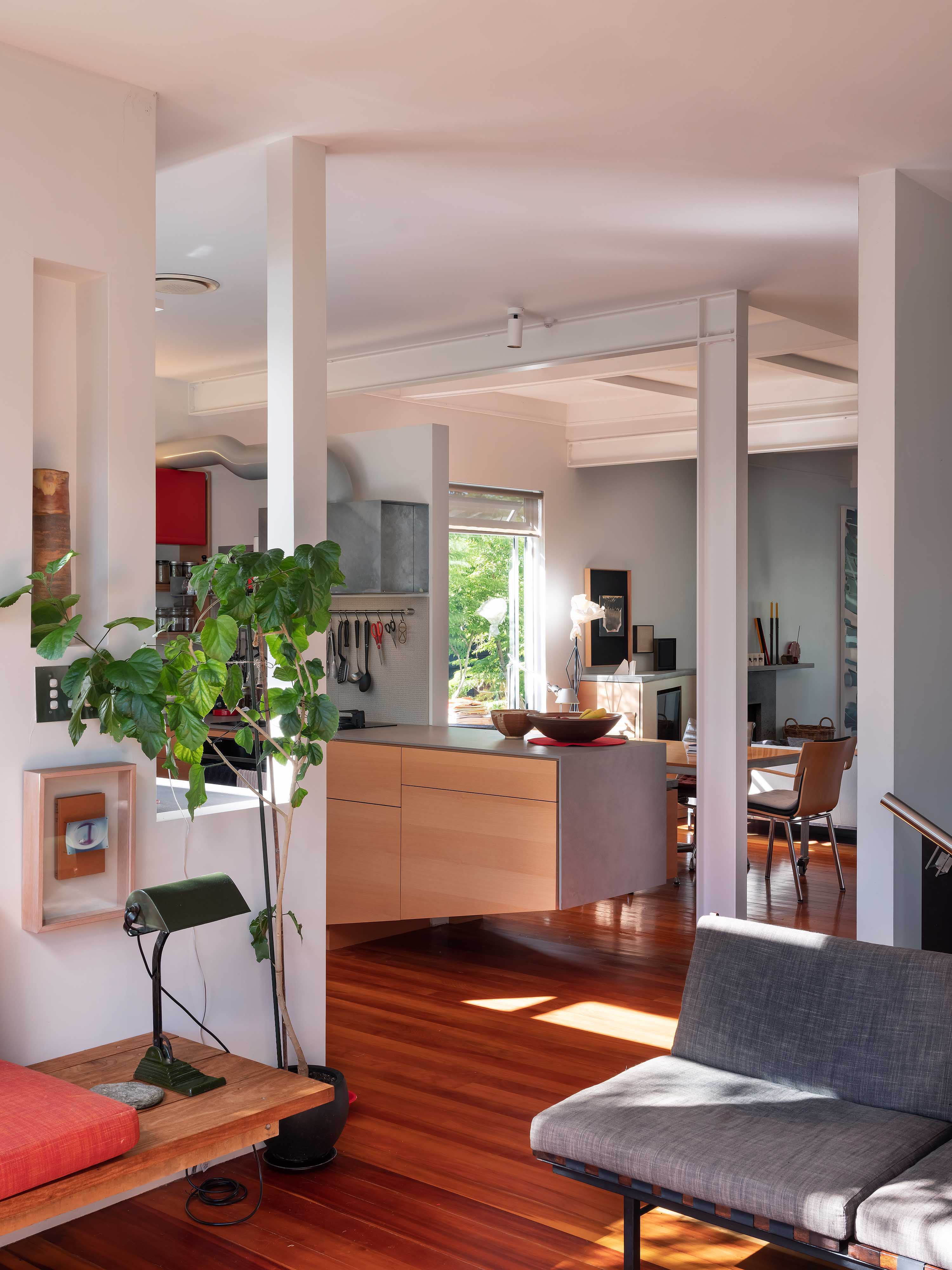 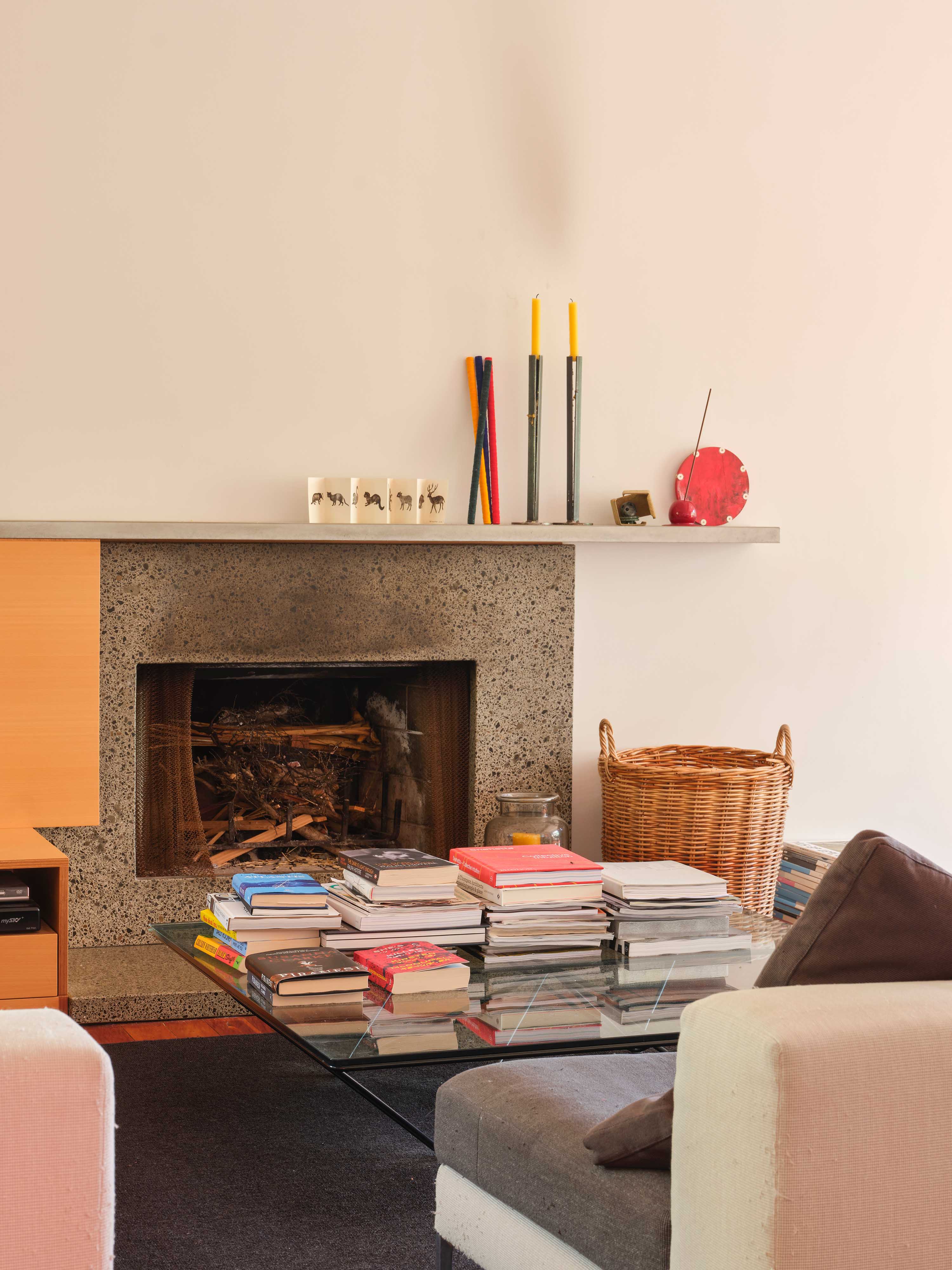 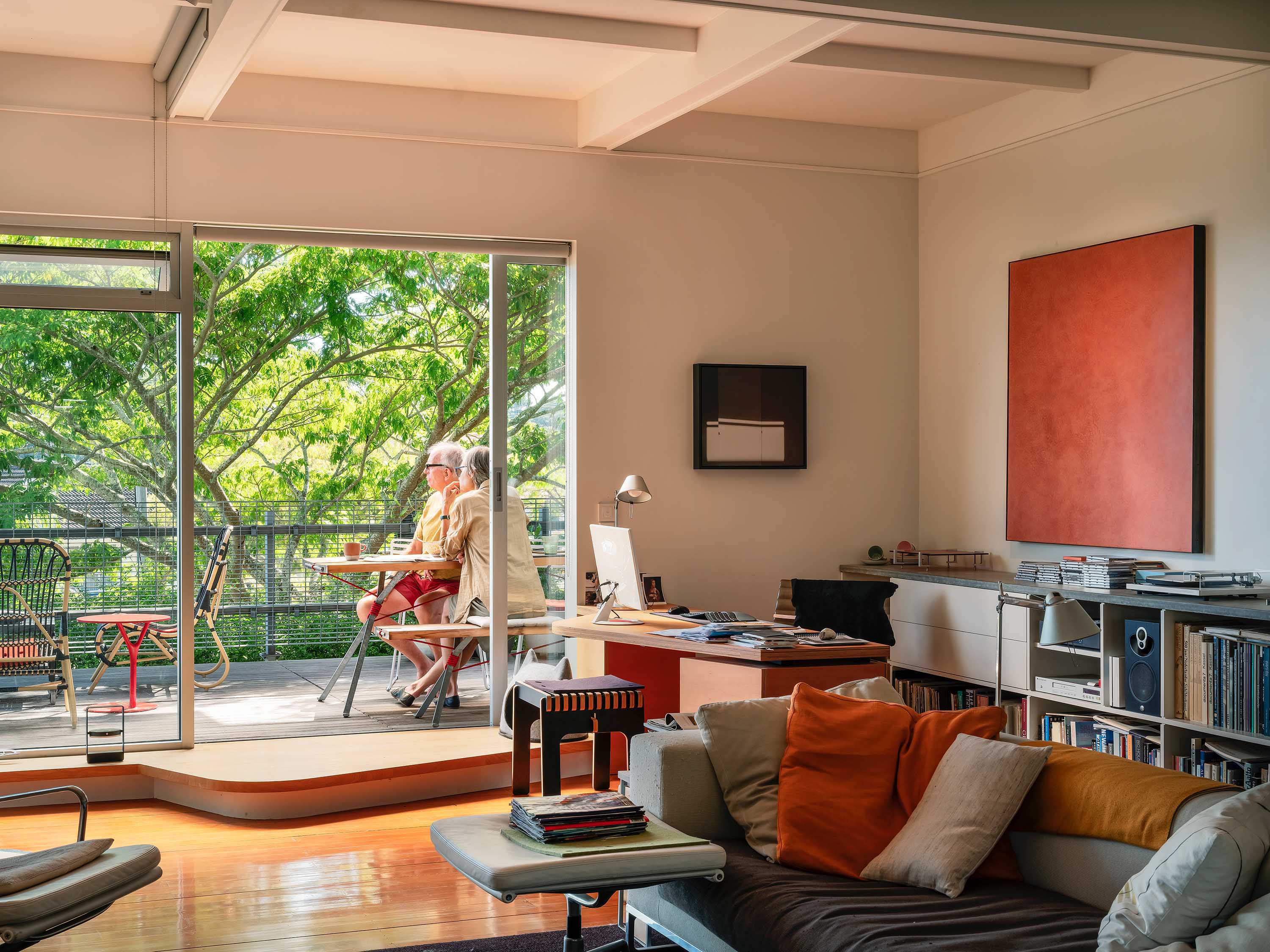 Furthermore, it had enough bedrooms and there was potential to turn the garage into a studio for van Wezel. And there was that view. “We stood on the deck,” remembers Bossley, “and said, ‘Shit, we could live here!’” A day later, on Monday morning, Bossley arrived in his studio and announced he’d found a great house to buy, and it didn’t need anything done to it. Everyone laughed. How long did that last? “Oh, about a week,” he says. Four days later, they bought it.

A year down the track, they started on the first of their many iterations: converting the garage into an art studio, propping the house up and digging out to the back wall to create another bedroom, lots of storage, a small bathroom and a laundry. Out came 26 truckloads of soil, and in went airy rooms and concrete fins supporting the upper storey. The stud is only about 2.1 metres high, but the space feels expansive, with full-height doors and views of the garden. That was 2003. Over the next 13 or 14 years, they picked off smaller jobs – replacing an original bay window in their bedroom at the front of the house with a more contemporary version; pushing out the bedroom walls to make bigger rooms for the boys; reworking the bathroom and front entry with a big pivoting door.

As they went, they worked through a language that is intentionally different to the original weatherboard house, and which marks the changes they’ve made in quite a deliberate fashion. Fibre-cement sheet with exposed hex-head screws, sometimes painted red and sometimes grey. Double-glazed aluminium joinery. Raw galvanised steel beams, posts and poles on the outside; white-painted steel I-beams inside. Glass-reinforced concrete used on windowsills, around the fireplace and on the bedhead. Bossley wasn’t particularly worried about making it all match up: different rooms have different skirting boards; sometimes there’s a negative detail and sometimes there isn’t.

In that way, the house charts the time in which the various projects were undertaken. You walk around the house and you can feel the shape of the original rooms, despite the changes that have been wrought. The drivers have been large – reaching for light and views, and creating space – and small, often based around the desire to accommodate a particular artwork or piece of furniture. “We didn’t feel we needed to rush to a coherent, consistent work,” he says. “We’ve just enjoyed falling in love with the house and letting it fall in love with us.”

The next major project was in 2017, when they rebuilt the front of the house, replacing the deck and balustrade and turning a small room off the bedroom into a tower. “It wasn’t a tower really,” says Bossley. “Every time I came home it drove me crazy that it was trying to be a tower but needed to grow up. So we finally pushed it up to get it as high as we could and give it some expression from the street.”

And they’re far from done. While I was researching this story, Bossley gave me a schematic showing the many iterations of the house (see page 76), starting from 1940, through the 1989 renovation and the various changes after that. On the cards for this year and next is a steel screen to close off the studio courtyard from the driveway, and maybe a lift, since they figure by the time they need one it’ll be too late to put it in. They’re also considering extending the pergola on the back and creating some fabric screens to shield them from a possible development next door. For 2024 and beyond? A question mark, though no doubt a loving one. 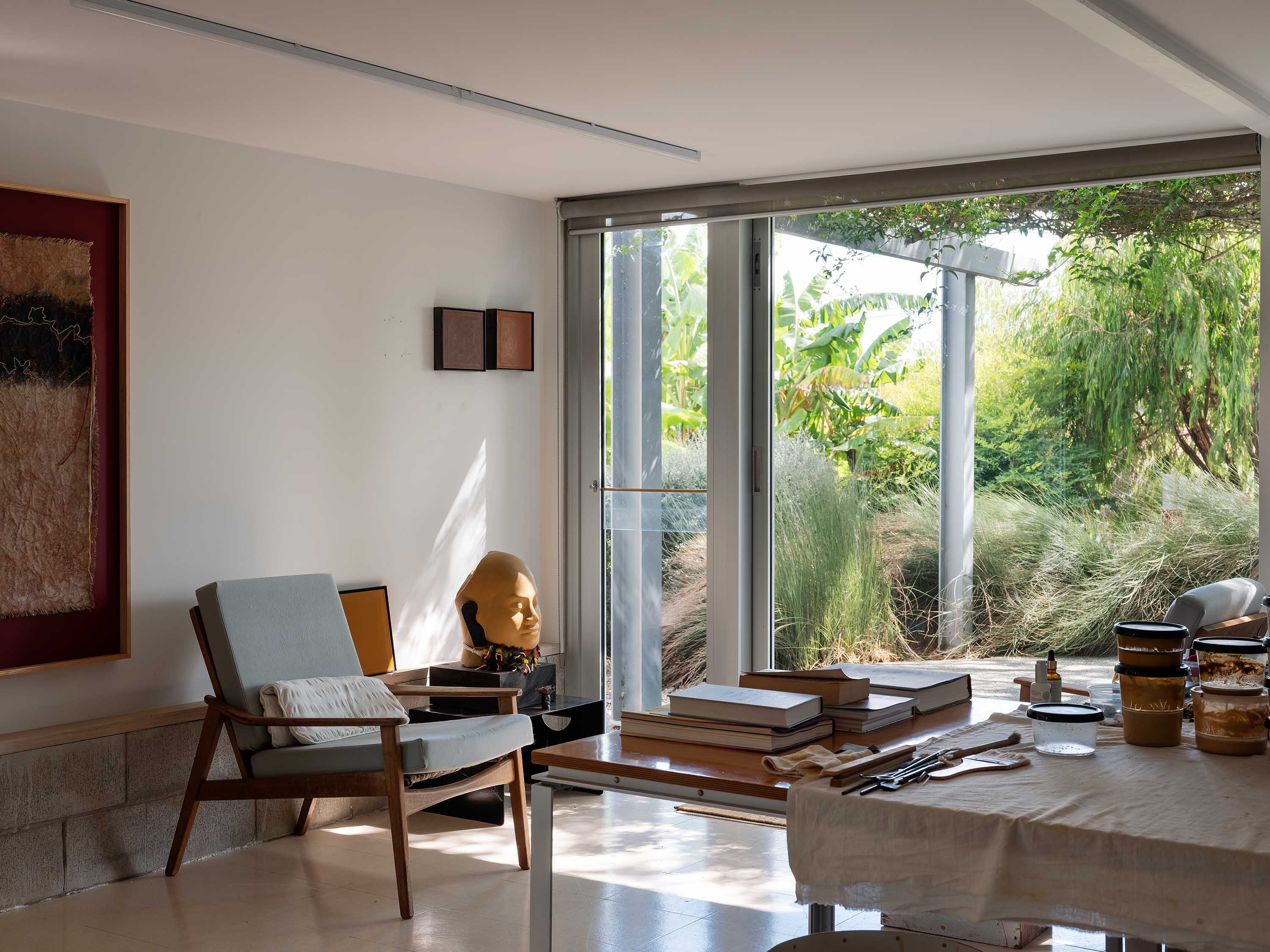 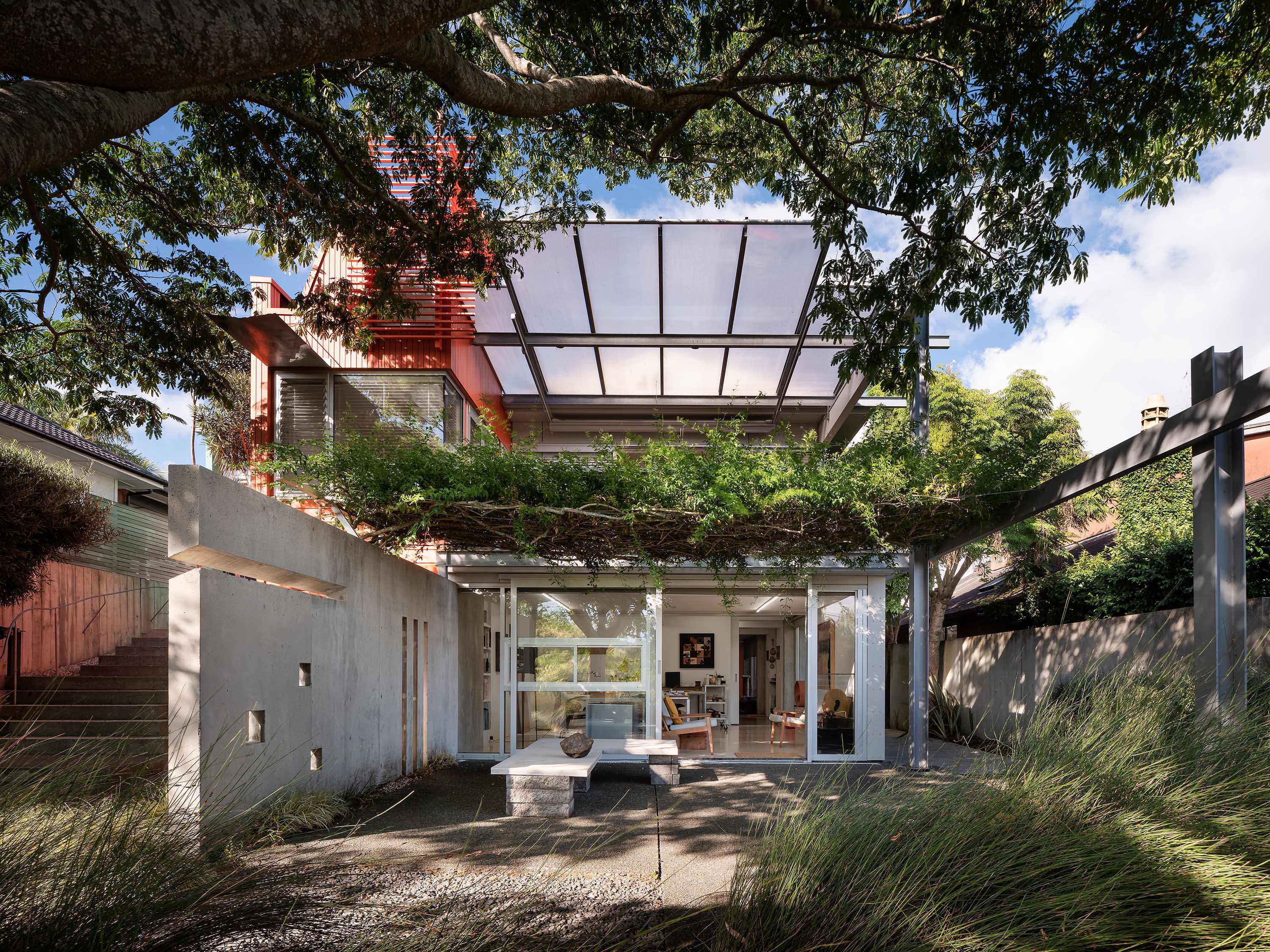 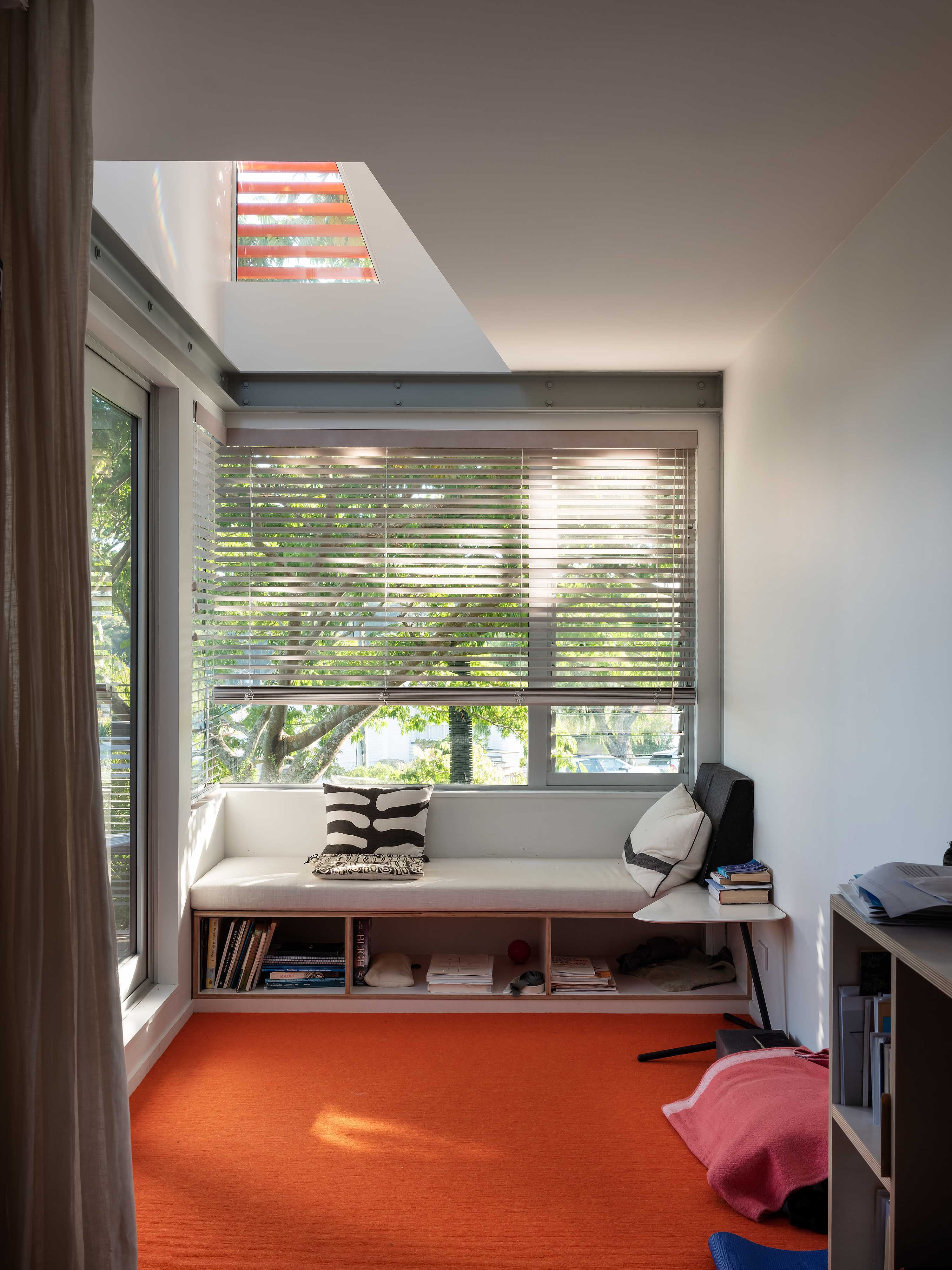 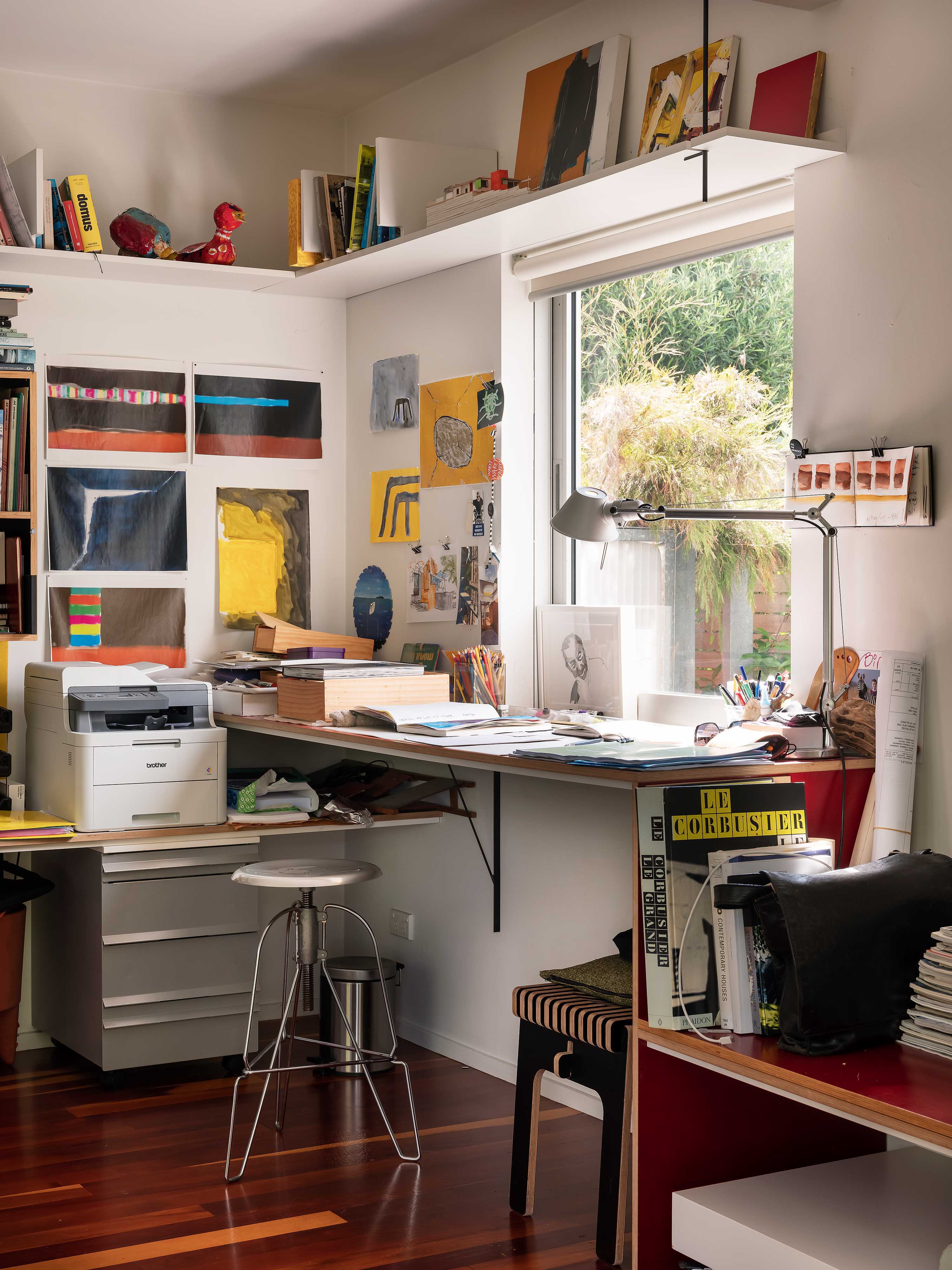 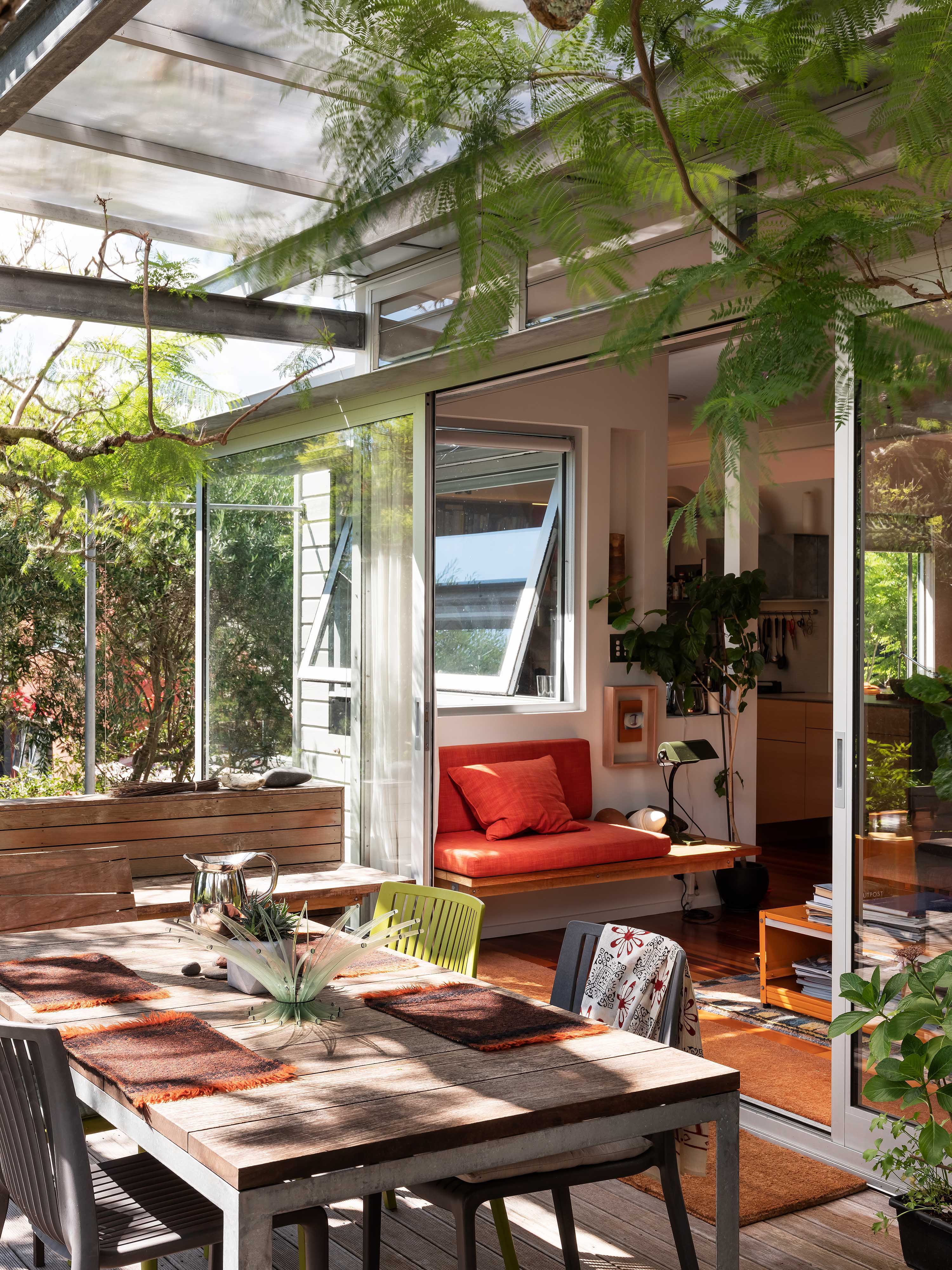 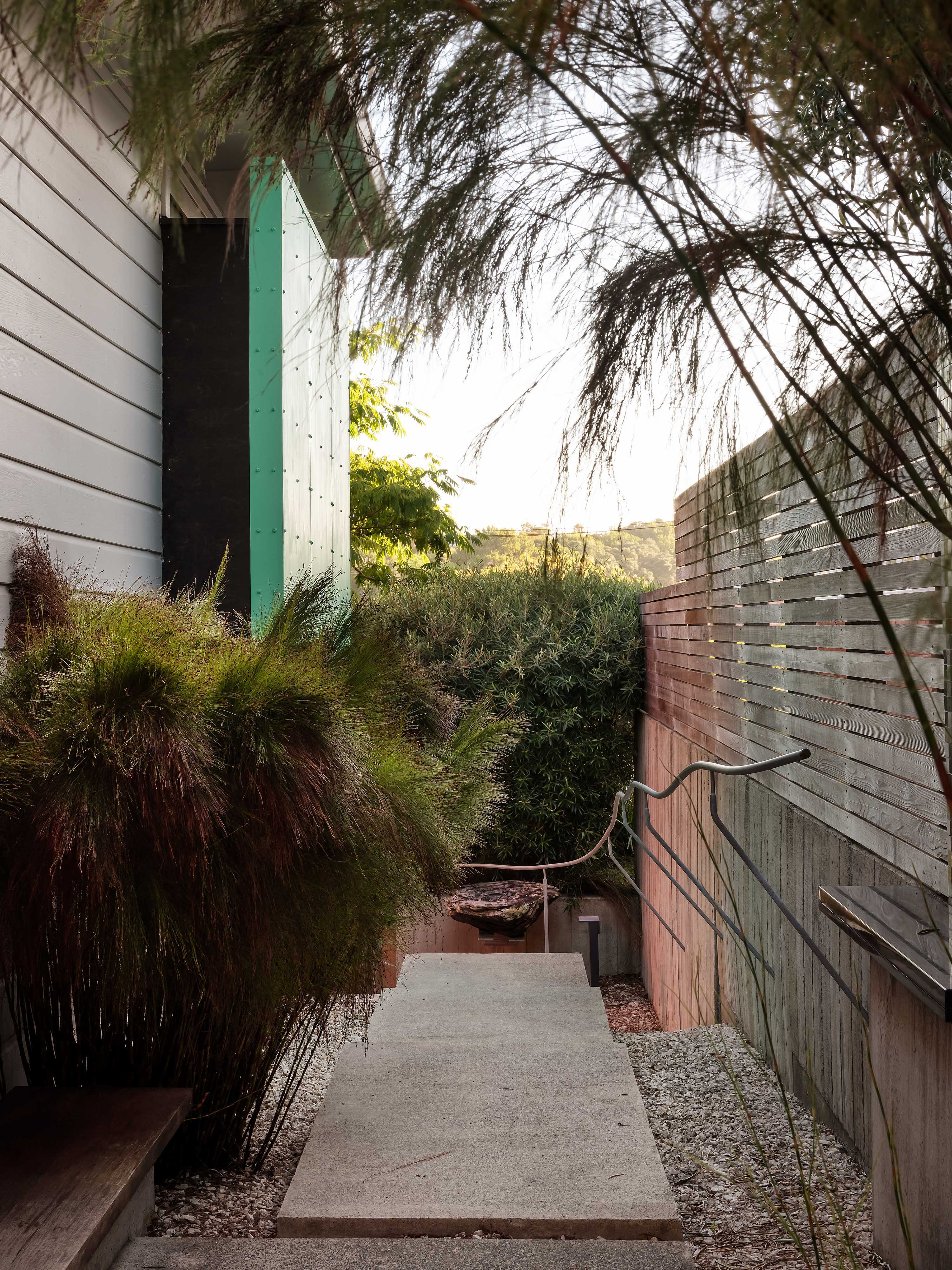 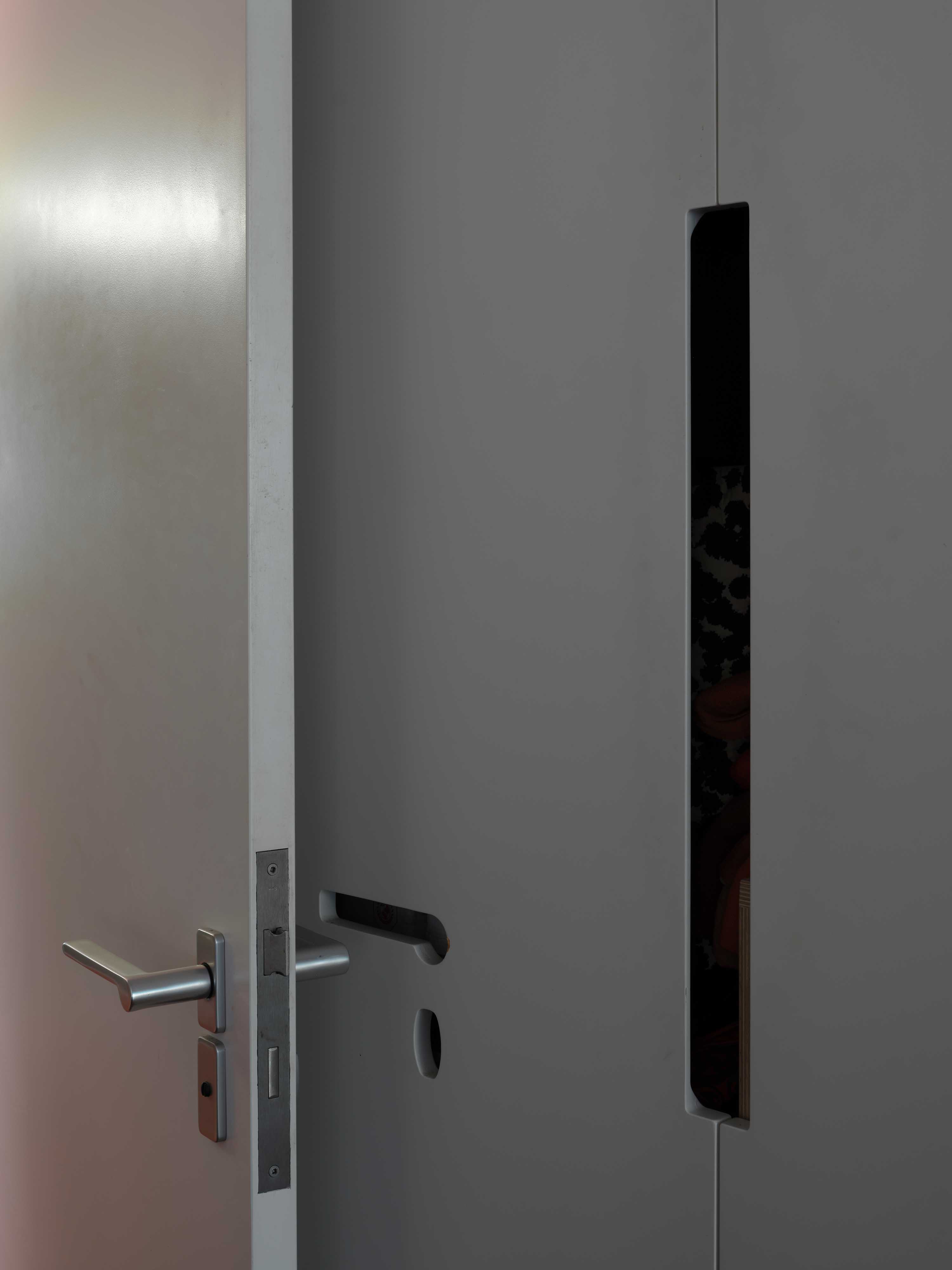 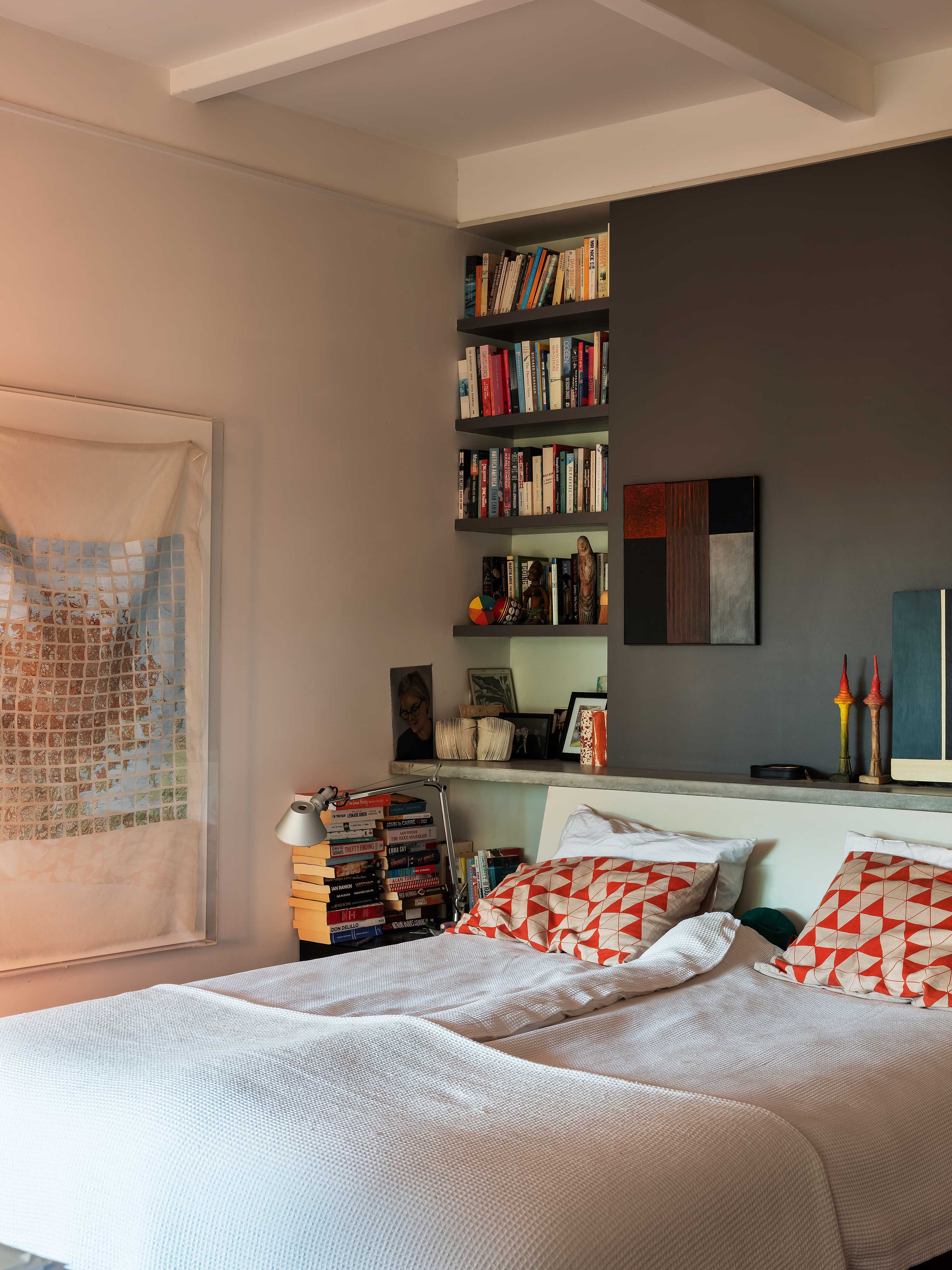 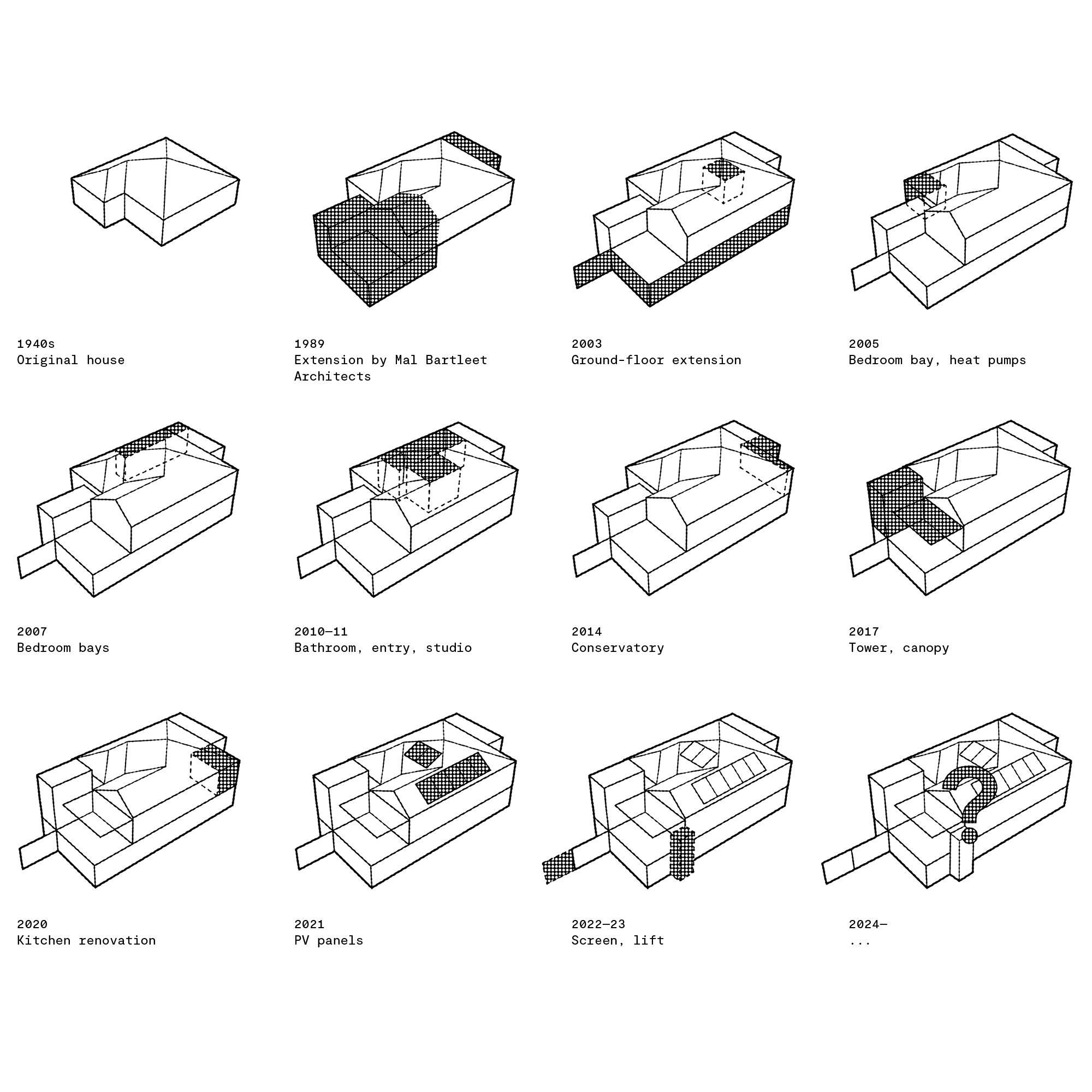