Designed as a weekend retreat and future retirement haven, architect Tim Nees delivers a home that’s in harmony with the land. 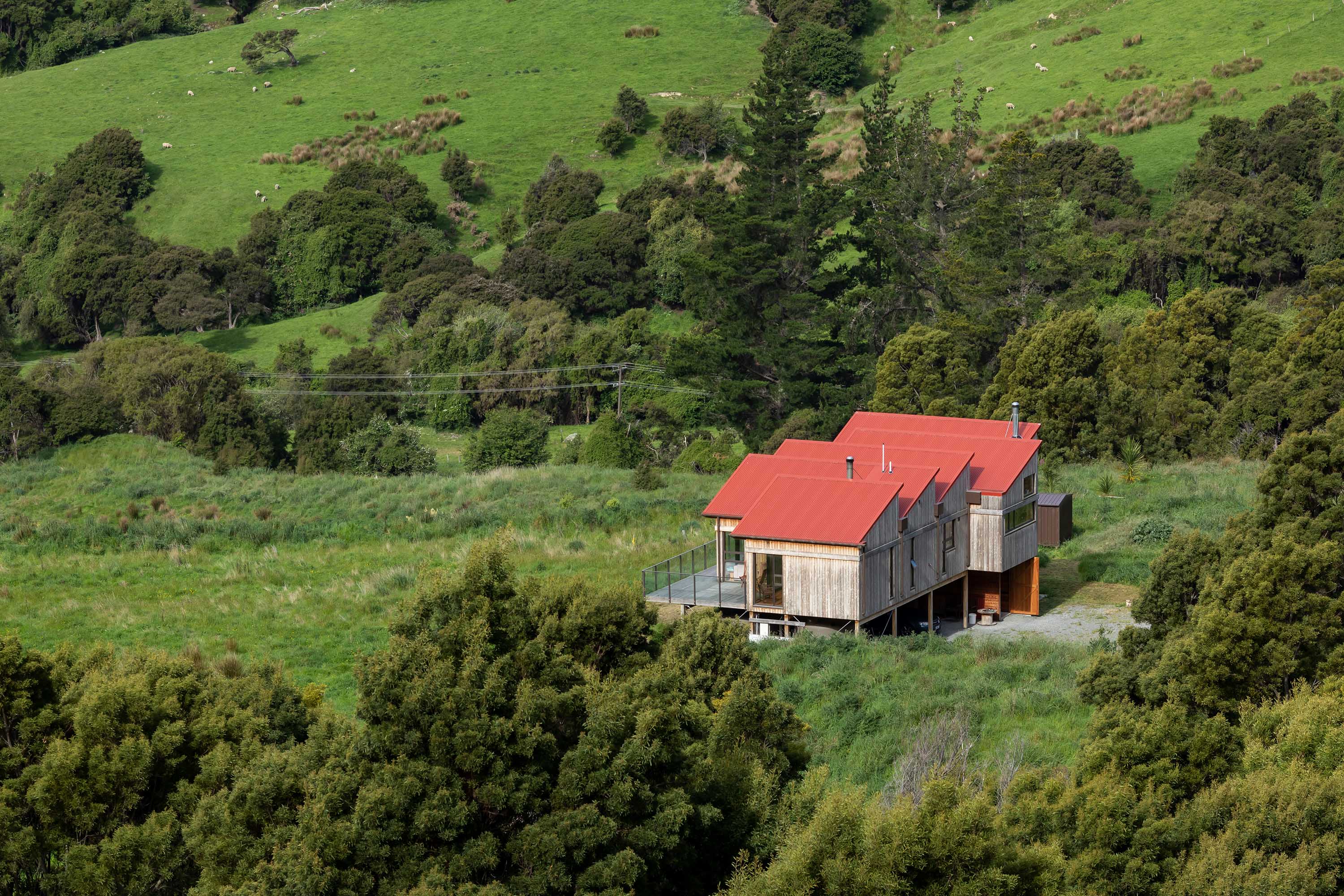 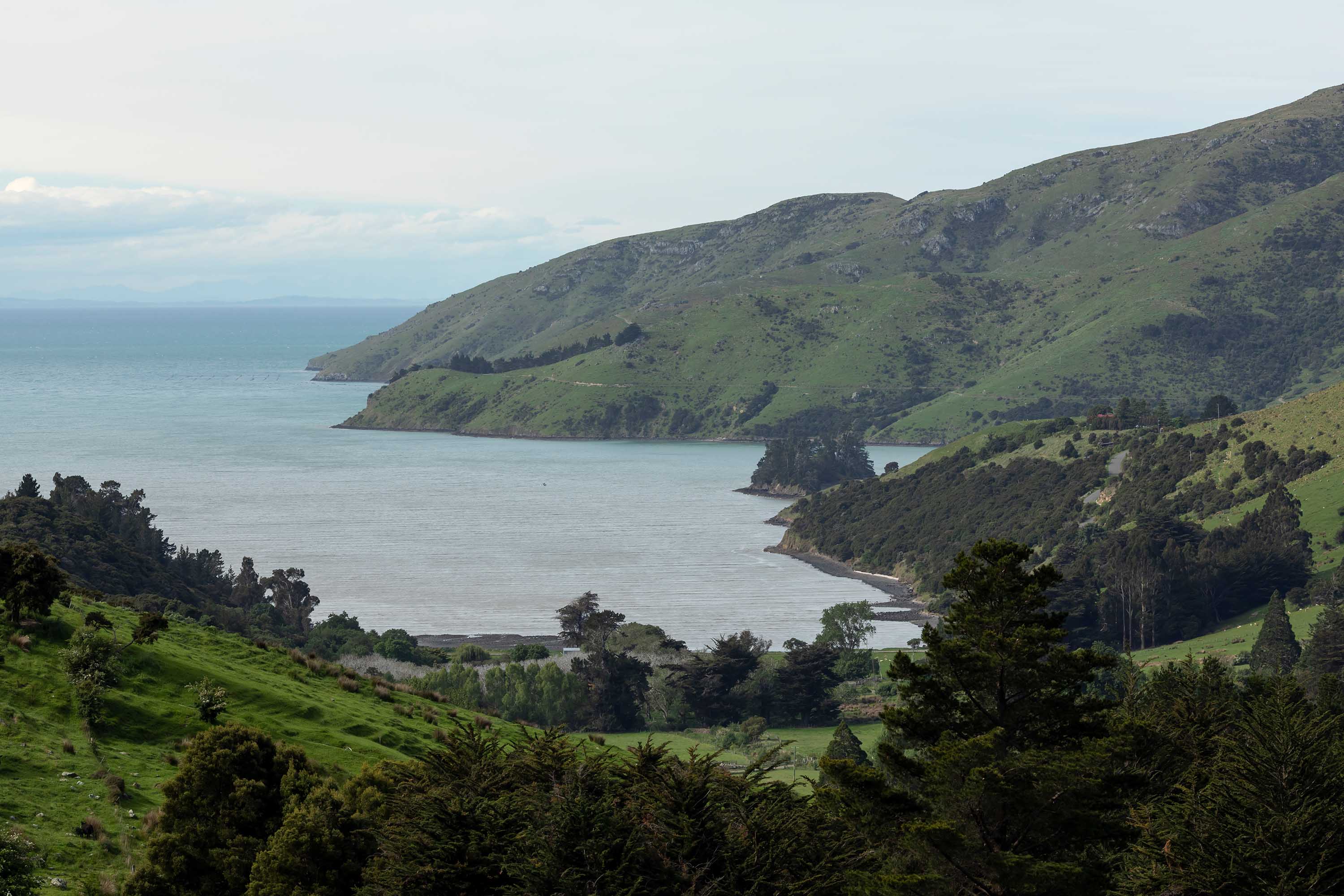 The landscape of Canterbury’s Banks Peninsula is ruggedly alluring. It’s a raw blend of tussocked hills and weather-beaten native bush, where rocky cliffs fall away into dusty blue ocean. But when the couple behind this weekend home bought their piece of the peninsula a few years ago, it didn’t look like that at all. Instead, their section was a big grass field streaked with groundwater. A chunk of farmland grazed by livestock. Determined to restore the site to its original condition, they got to work “rewilding” it. Planting tussocks and native trees, the land gradually began to take shape, and the insects and birds commenced their slow return. Finally, they were ready to introduce the next piece of the picture – a house.

Following in the same environmentally sensitive vein, the home was to be completely self-sufficient and off-grid with a close connection to the outdoors. Charging Christchurch’s Tim Nees of Tim Nees Architects with the design, the house was to initially serve as a casual weekender before evolving into a permanent home for retirement. They wanted it to be light and airy. It needed to catch the northern views but also provide shelter from the harsh southerly. A home with “a very casual aesthetic and living atmosphere,” says Nees, that was “appropriate to the rural environment”.

It was a generous, open brief, and as with any rural site, the key demands were made not by the clients but the land’s unique terrain. The rainwater which ran down the surrounding hills and across the plot, for instance, meant a traditional concrete pad wasn’t feasible. Nees instead hoisted the home above the meadow onto laminated wooden posts. “I approach design through observation, discussion, trial and error,” he says. The elevation allows the home access to the site’s finest views and sun while creating covered space below for cars, the all-important woodpile, two water tanks and a closed-in shed and entranceway. Not to mention, it looks good. 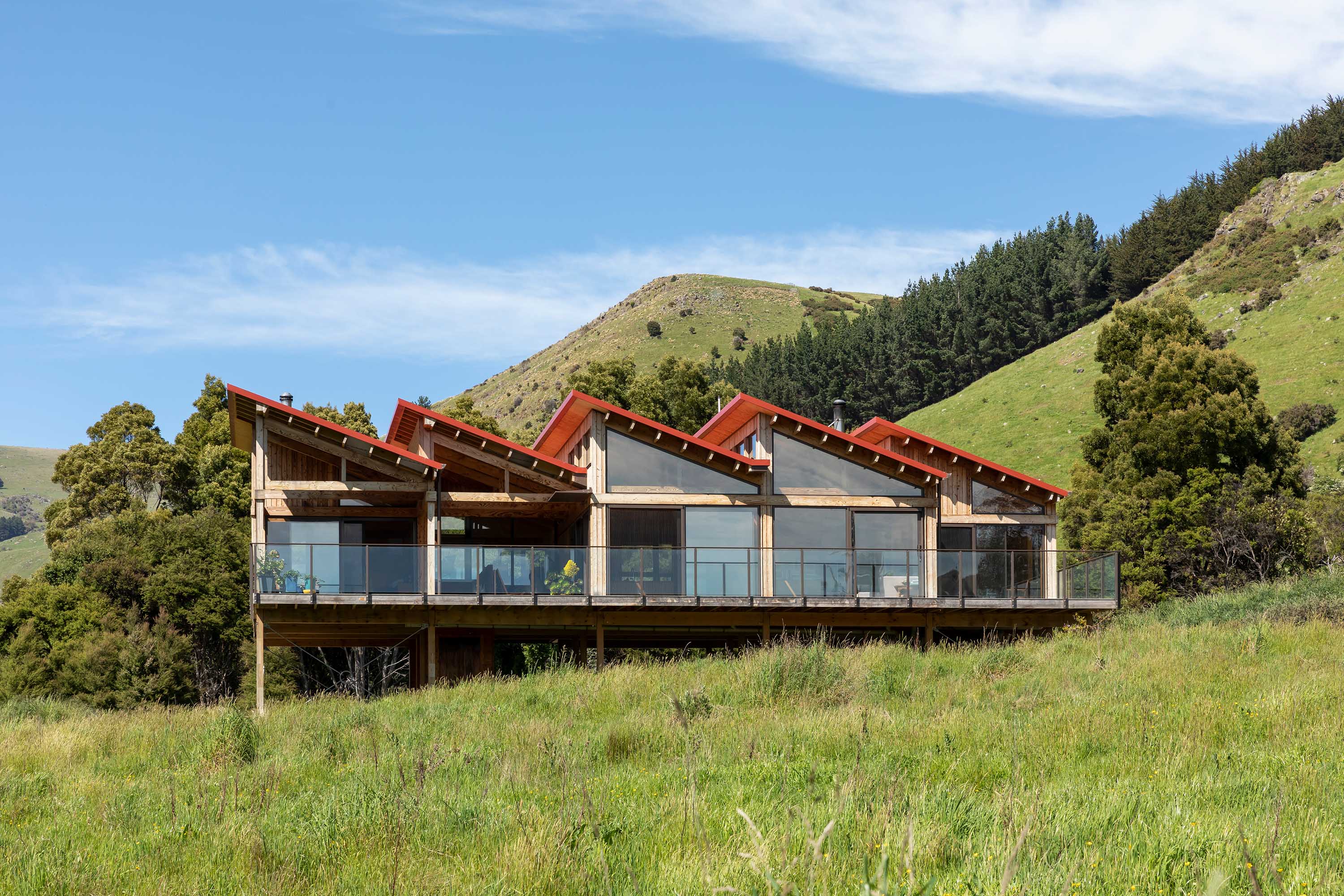 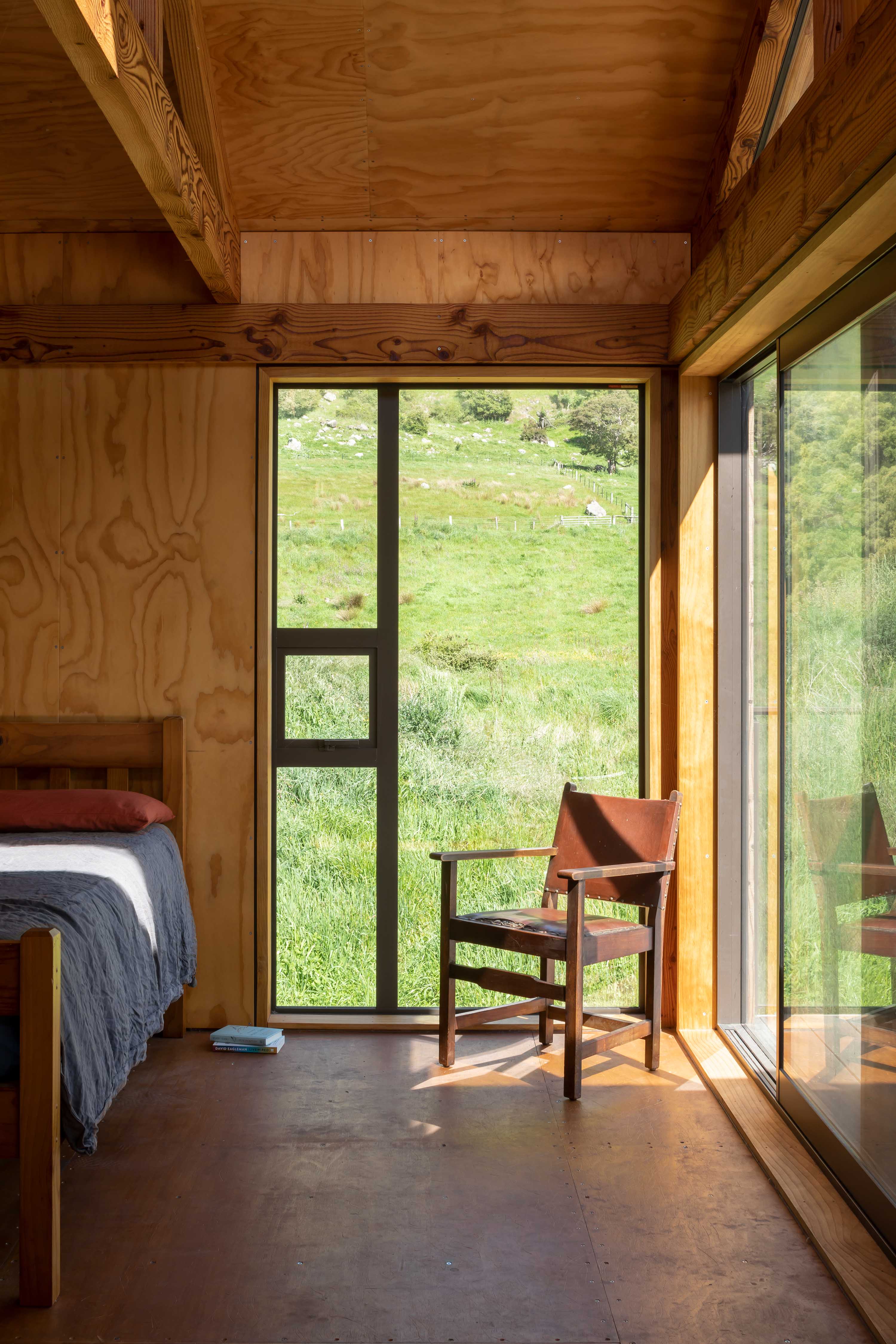 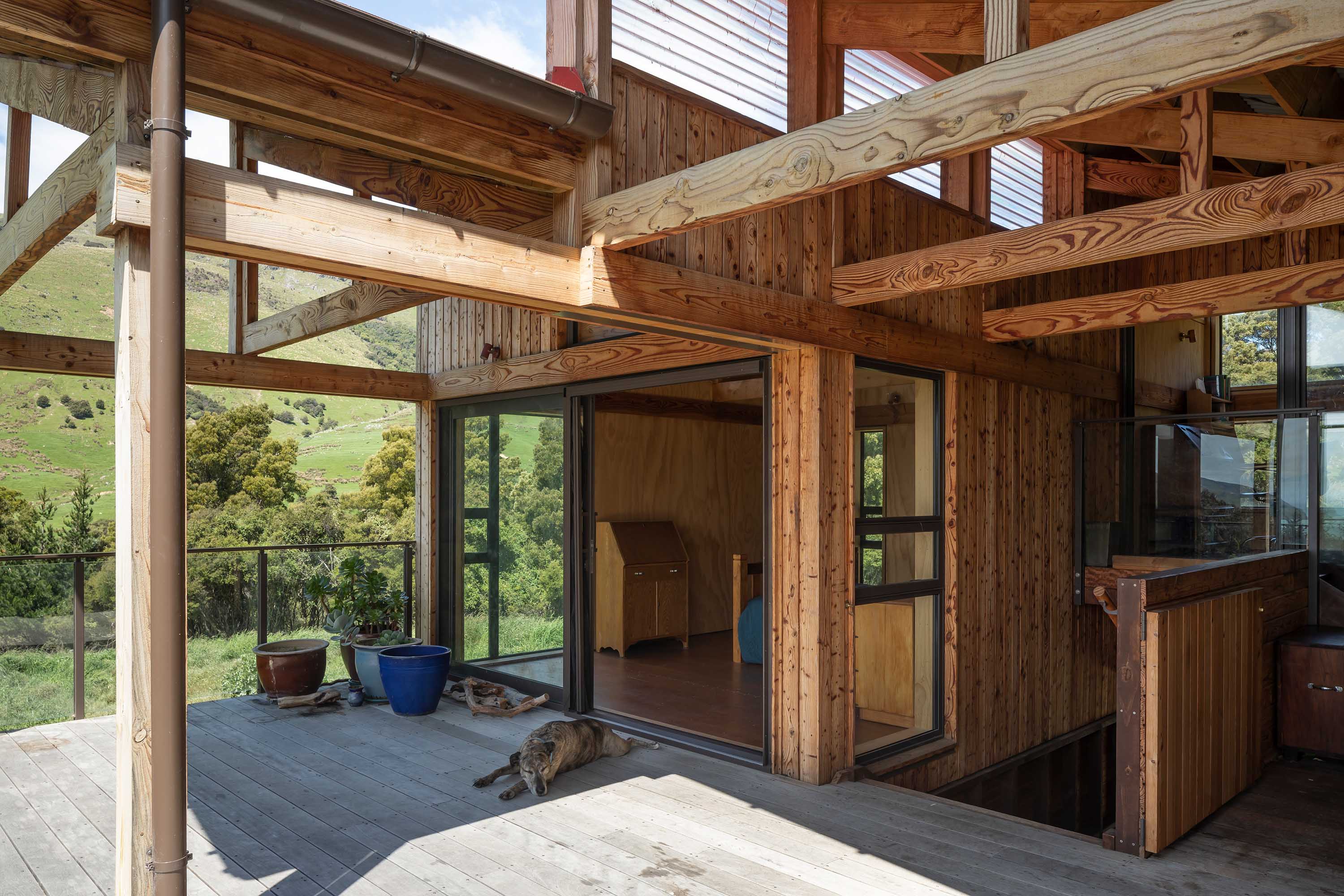 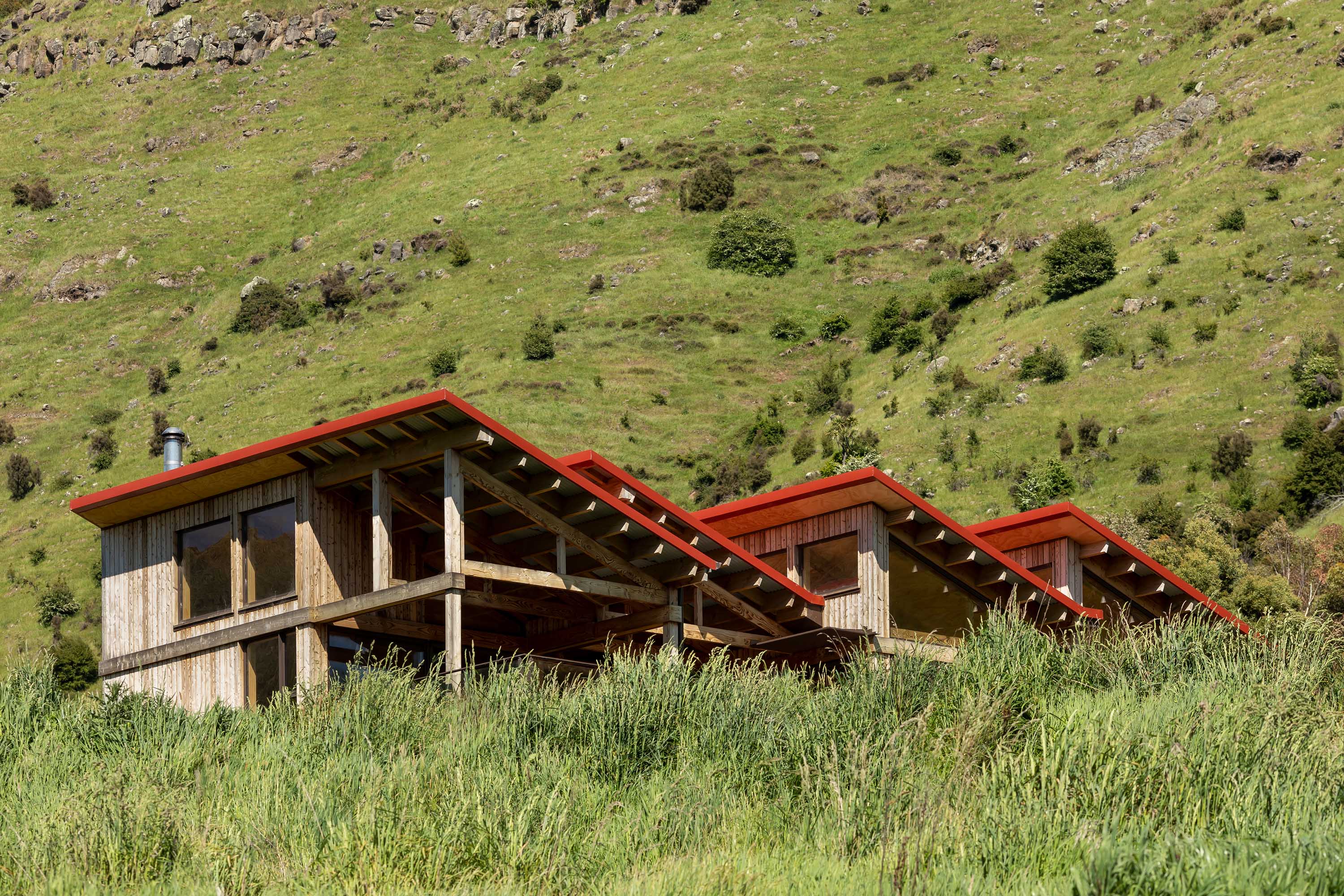 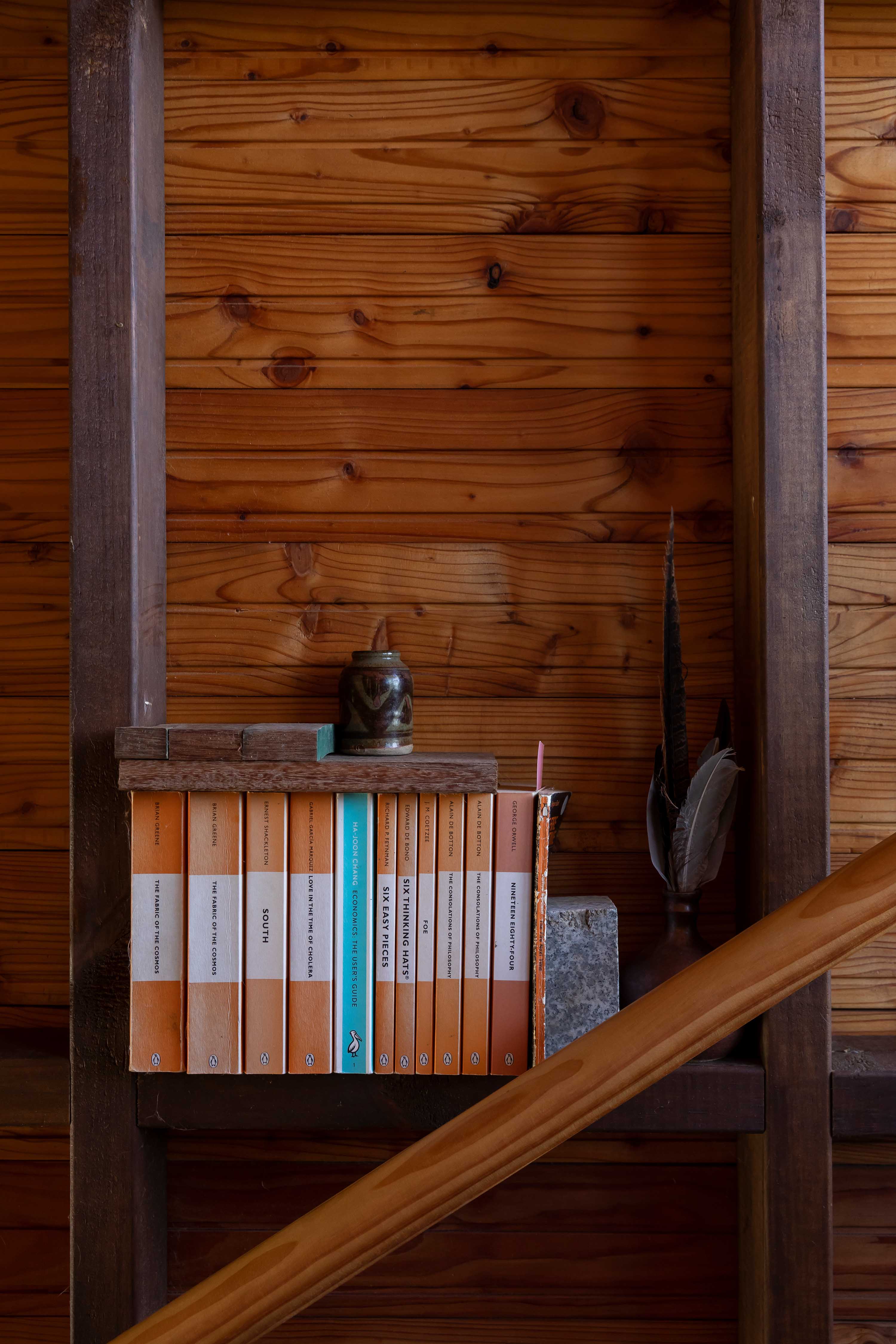 Entering the house from below and up an open-air staircase, wood is everywhere. The floors, the ceilings, the walls, the furniture, the joinery – you’re engulfed by timber. “Tramping-hut chic”, as Nees has previously mused, it’s a purposeful blend of macrocarpa, Douglas fir and plywood with a purpleheart deck and larch cladding. With each material selected for its unique properties, the house uses minimal steel and concrete, since timber was easier to work with in the isolated location. Furthermore, it neatly aligns with the owners’ desire for a low environmental impact.

In any other setting, this rampant use of timber might feel overpowering, but here, the reaching views to the coast and (on a fine day) the distant Kaikōura Ranges offer the necessary reprieve. The entire north face embraces this wild panorama, with sliding doors opening onto an expansive covered deck along the full width of the house.

That deck is key: instead of hallways and corridors, much of the access is outside. The layout is simple: at one end, there’s a main bedroom. Across the deck, there’s an open-plan kitchen, dining and living area, a bathroom and spare bedroom. A small office is tucked at the rear of the entry staircase and easily transforms into an informal spare bedroom – helping earn its place in the modest 135-square-metre footprint. The arrangement gives the owners an intimate connection to the outdoors.

The romance continues in winter thanks to the home’s two wood burners. One sits in the central living space, while a smaller wood burner heats the main bedroom. Though the house is spectacular in summer, the image of a crisp morning spent in bed as the fire cracks and snow settles on the deck outside is pretty enticing.

Of course, no discussion of the house is complete without mentioning its defining sawtoothed roofline. Nees incorporated the repetitive roof forms to acknowledge the surrounding hills – a refreshing departure from monopitch monotony. At the same time, the deep red hue pays homage to the original buildings of the area. “On the gravel-road approach, there are two wonderfully dilapidated sheds that are rustic red,” says Nees, and even the neighbouring cottage employs a similar red tone. “But mainly,” he says, “it helps give the building its lift. It feels like it’s rising into the sky.”

Visually, it’s successful, but the peaked roofline is no architectural folly. On a practical level, it allows for a series of clerestory windows that project morning light through the house while simultaneously blocking the intense heat of summer’s afternoon sun. It also maximises rainwater collection through numerous internal trough gutters. With this house, Nees hammers the point home that substance doesn’t have to come at the expense of style.

As time rolls by and the rewilding continues, the tussocks spread and the natives grow. Up at the house, a similar maturing is underway. The purpleheart decking has begun to silver, and the larch cladding is turning a honey-brown shade of grey as the home relaxes into its surroundings. The build may be finished, but the complete picture will continue to develop over time. A very fine outlook for retirement. 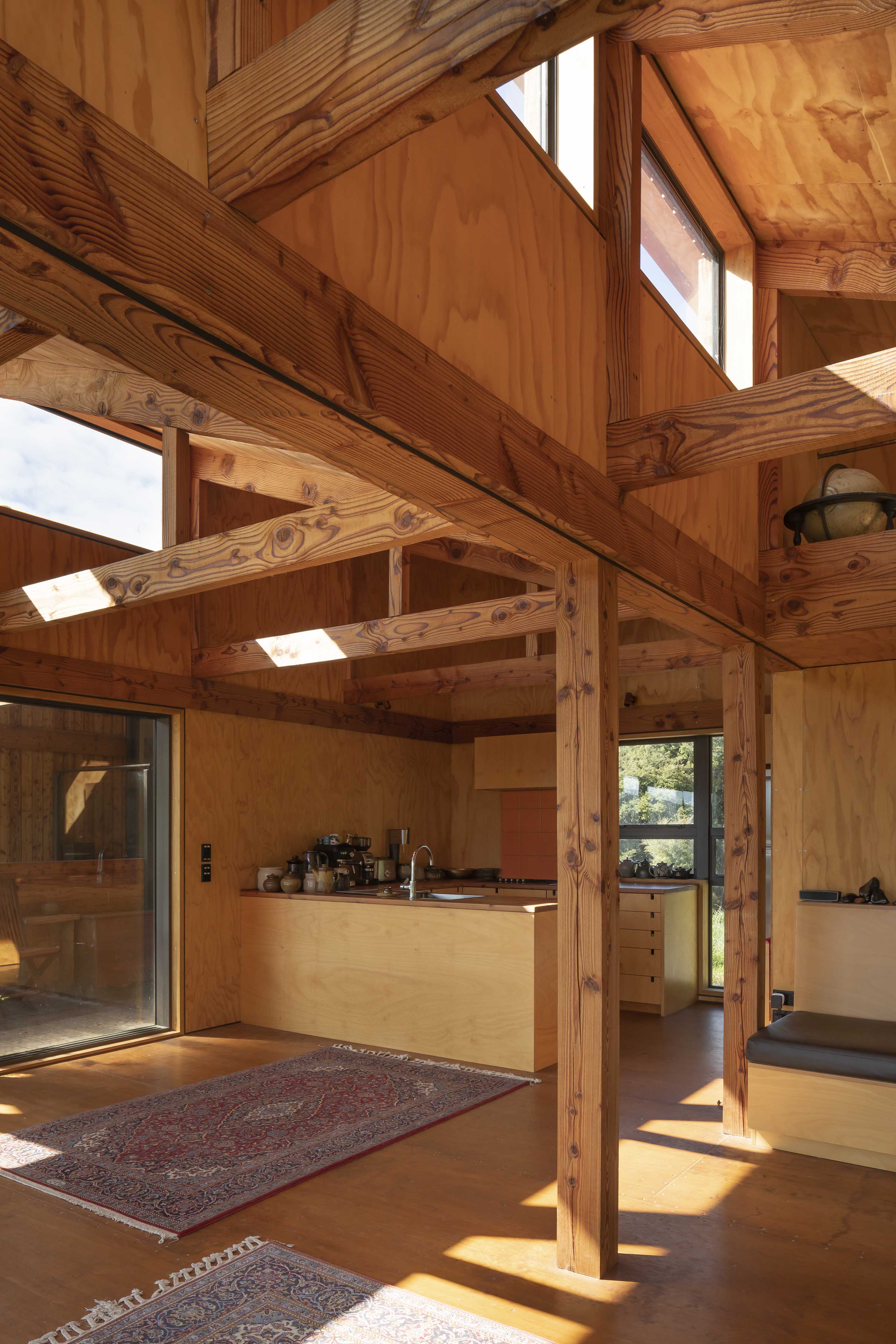 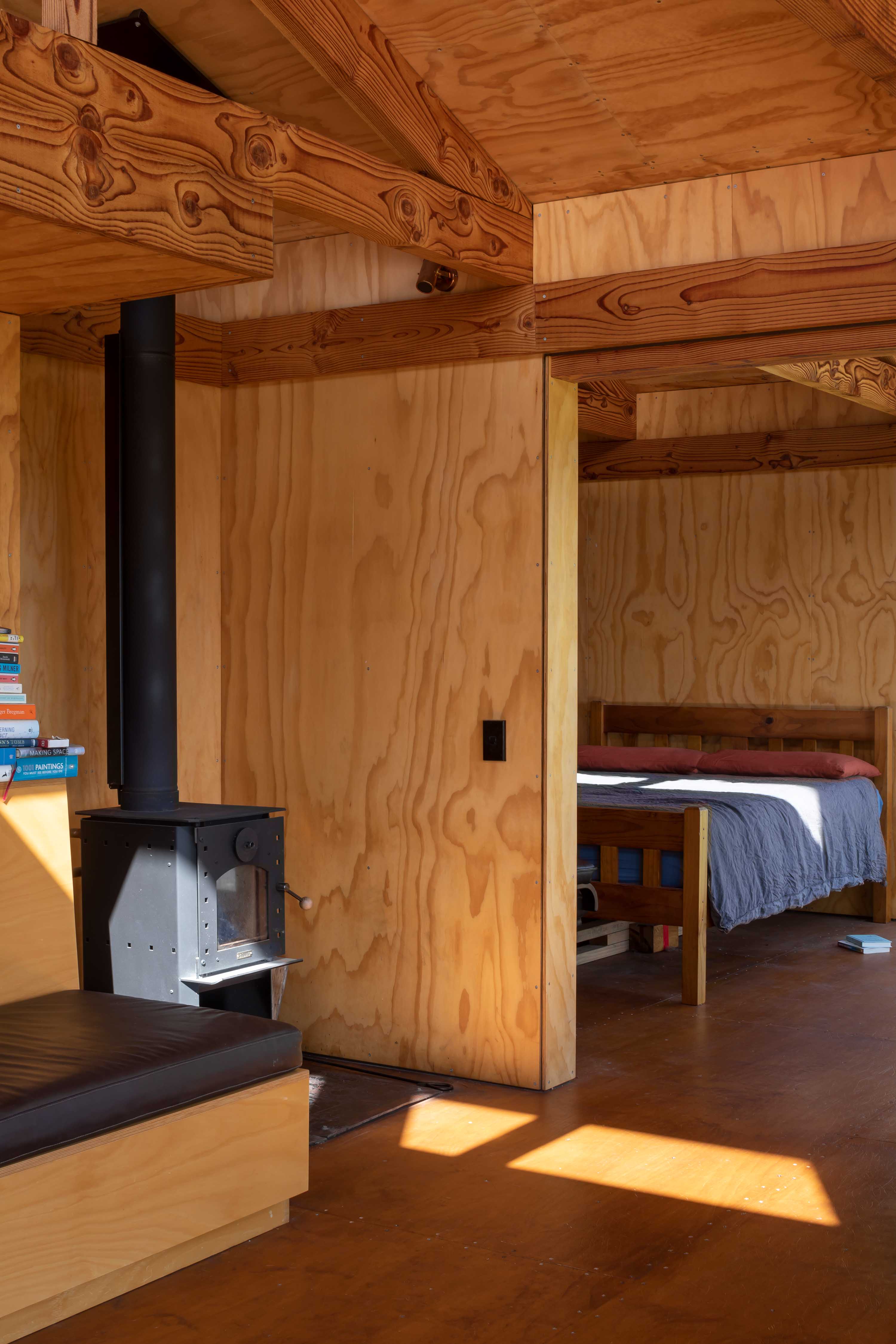 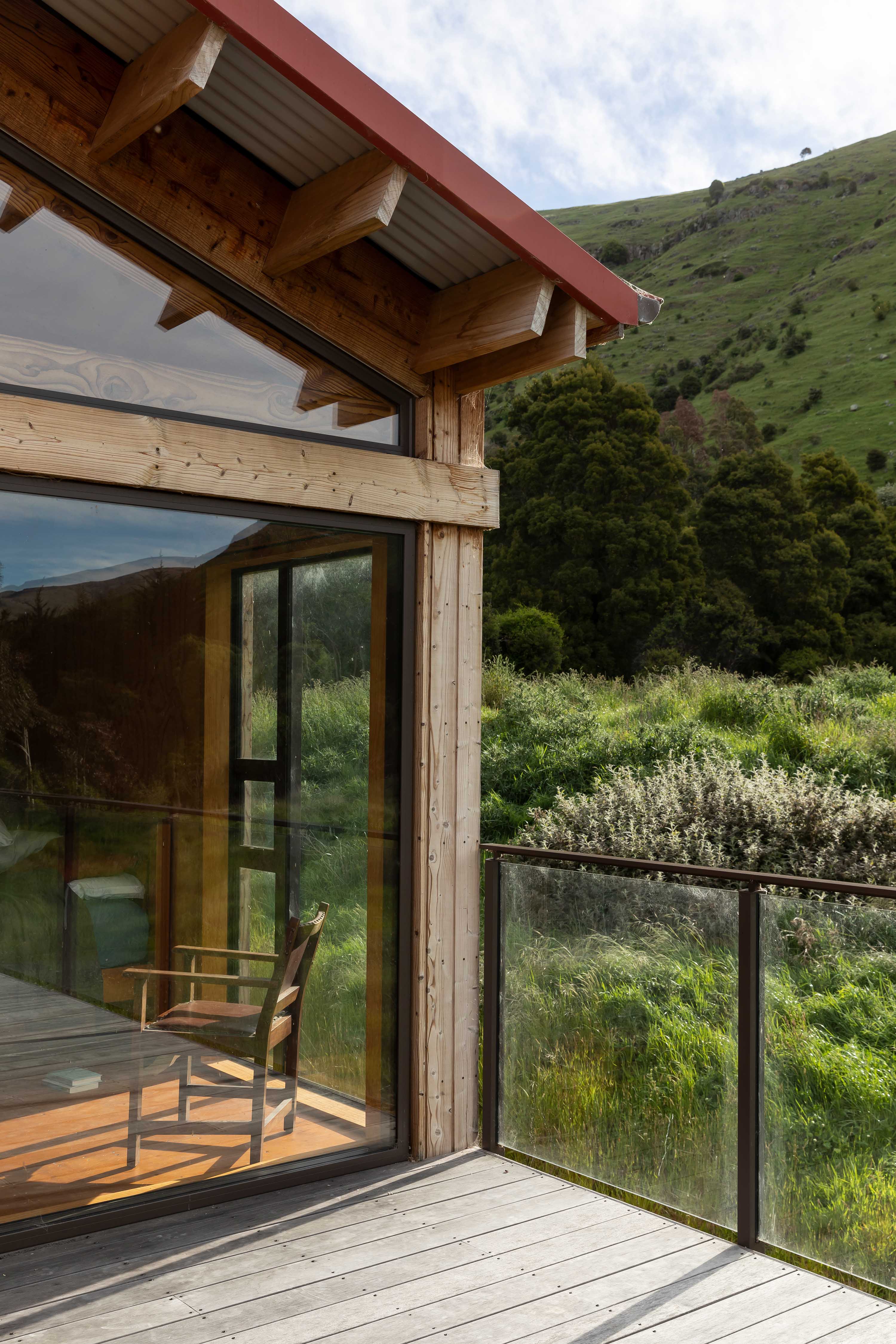 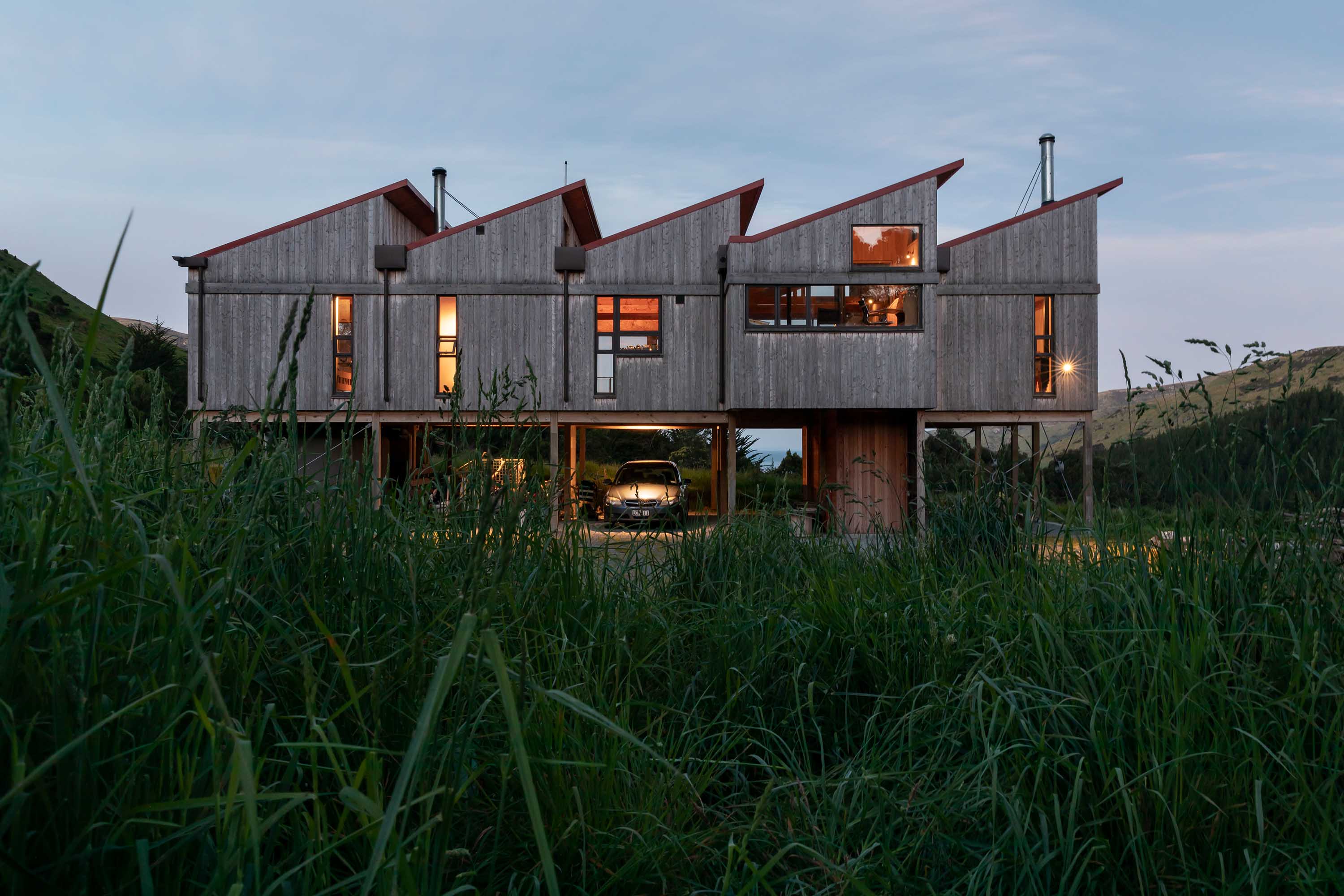 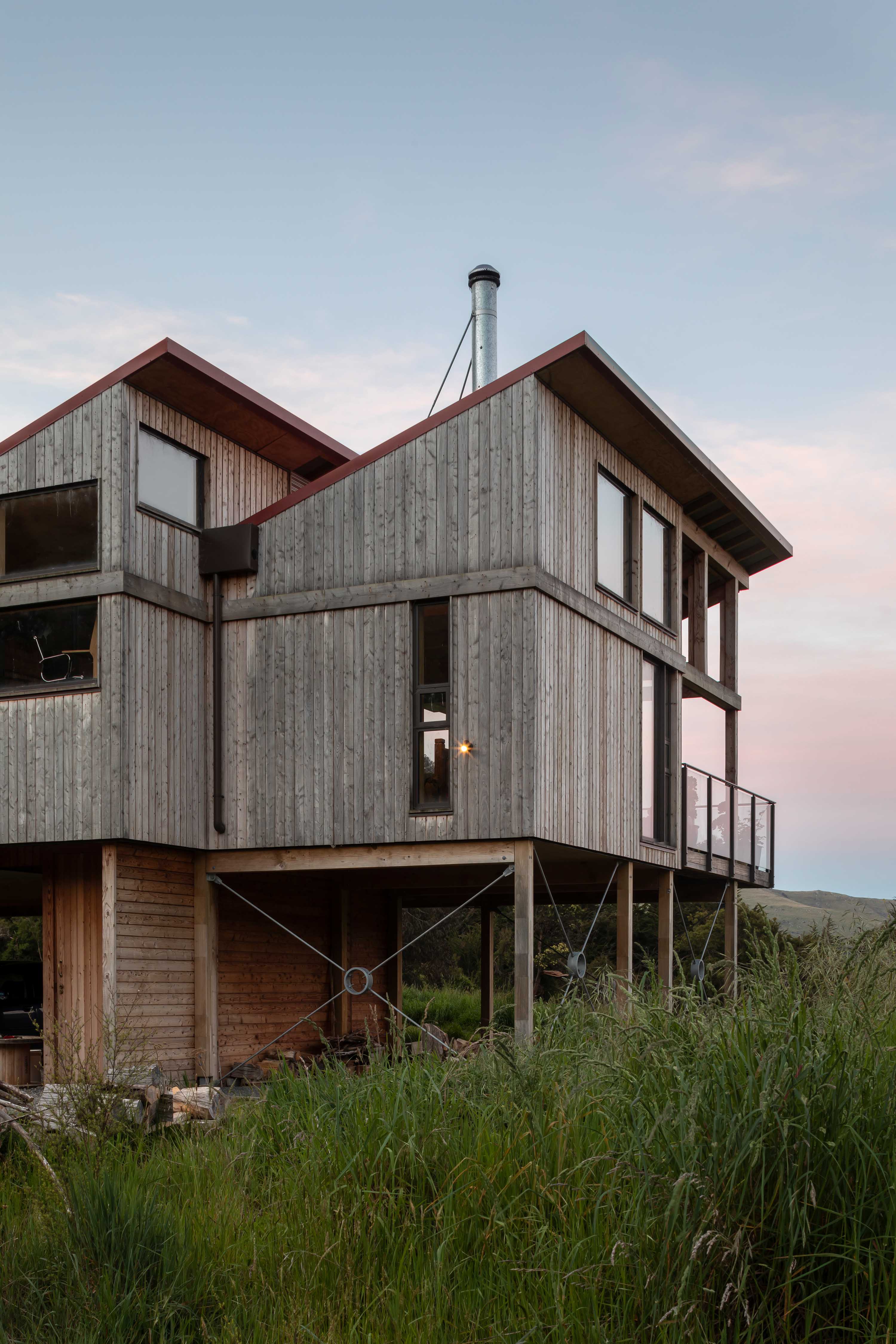 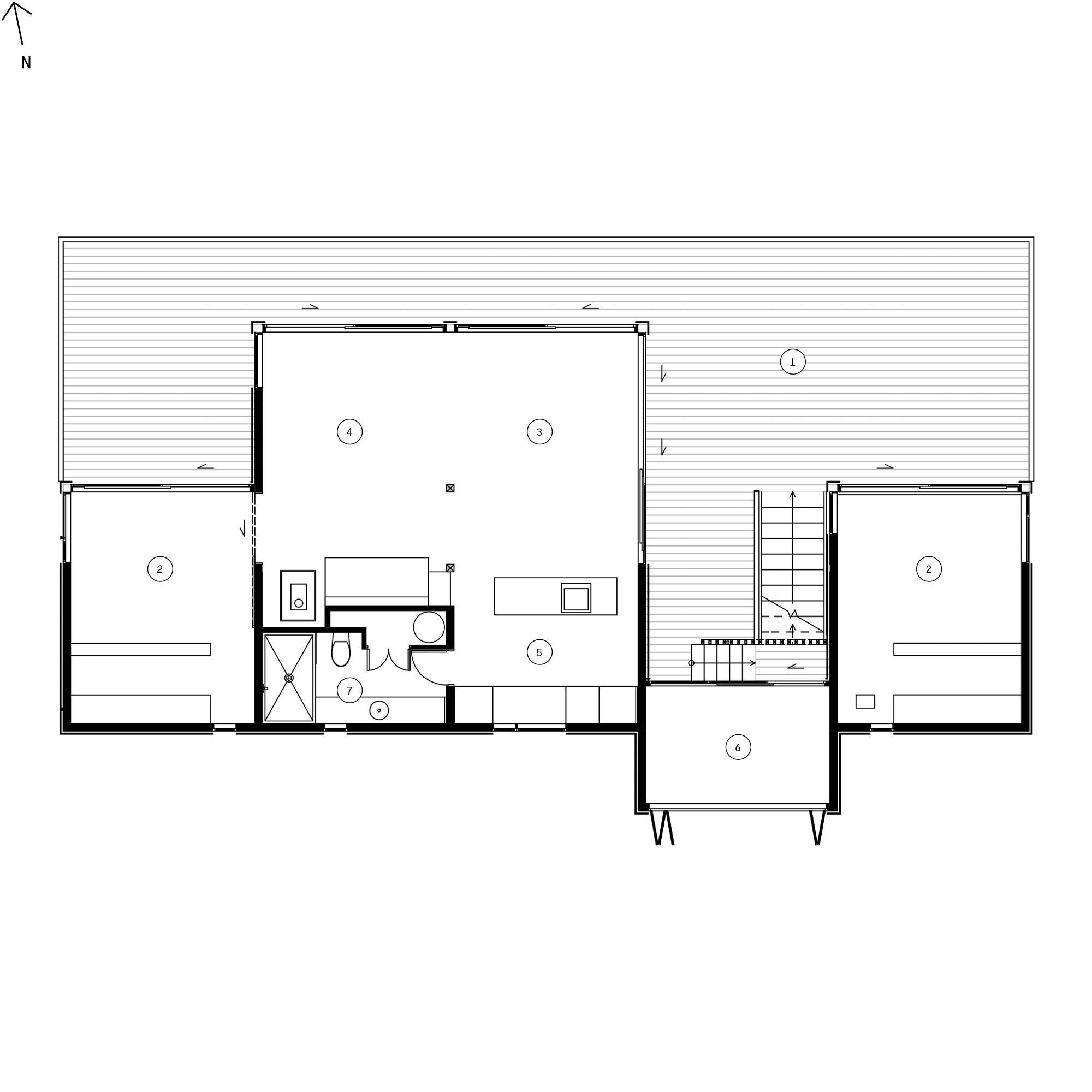