A sharp little house on Waiheke Island is a contrast in openness and containment. 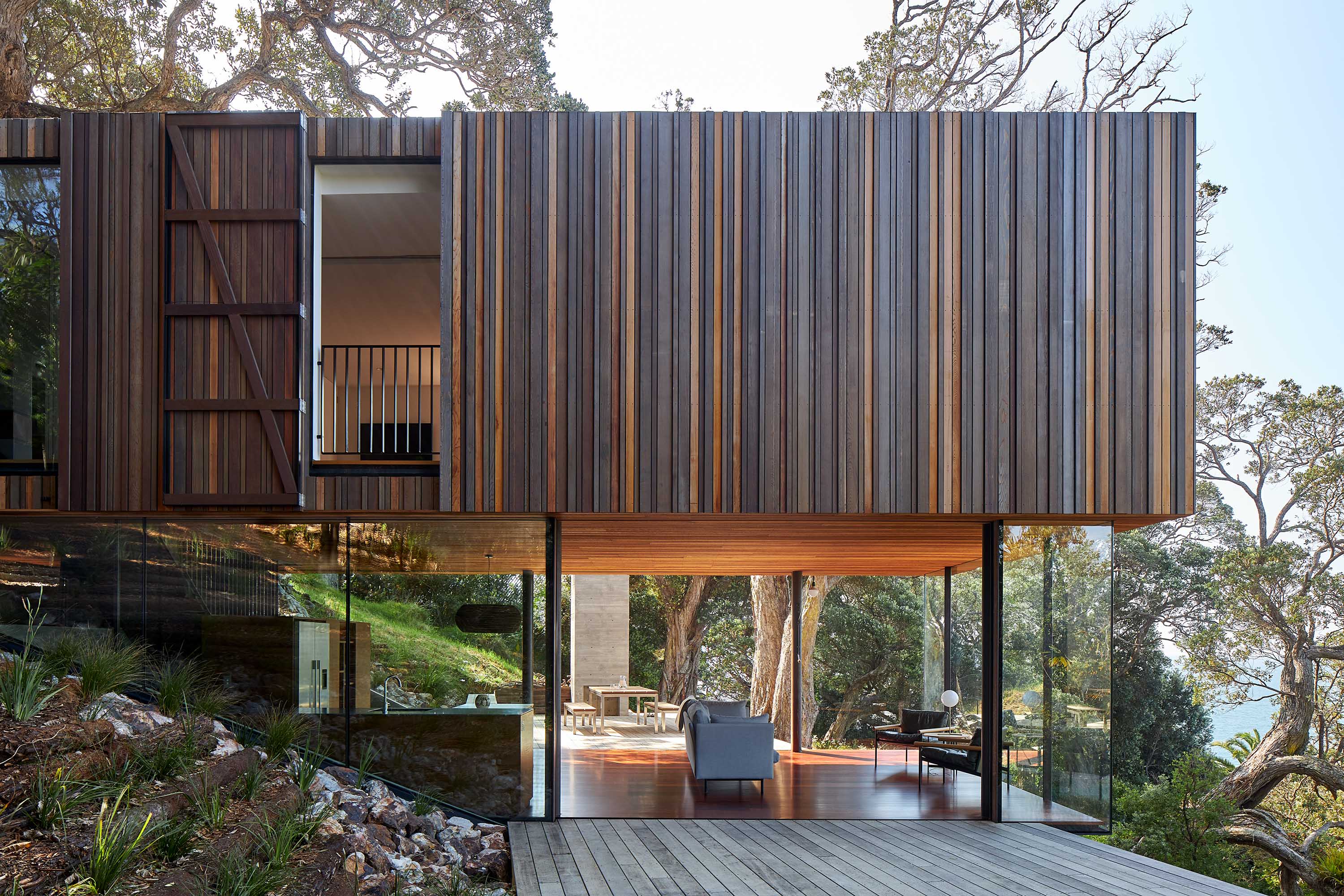 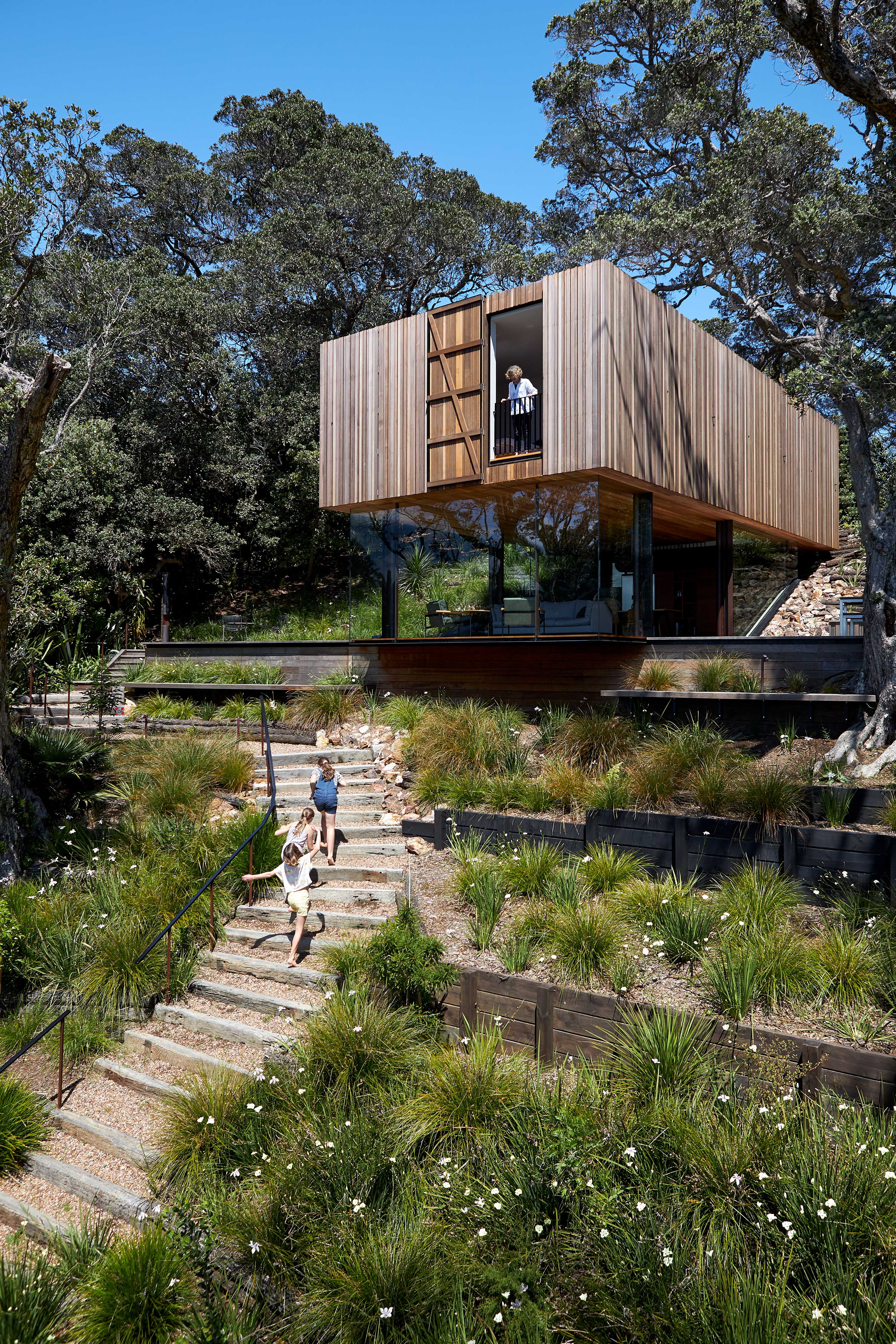 Anyone who watched this bach go up at Palm Beach may have wondered how on earth the steep slope above one of Waiheke Island’s finest beaches could accommodate a house. Just 18 months after the bach was completed, it looks quite at home – as settled into place as the ancient pōhutukawa that cradle it when viewed from the road.

Jo MacKay and Sam Curtis of MacKay Curtis Architecture were approached by the owners with a simple brief: sun and views. They responded with an idea centred around connection to the outdoors and comprising a long deck with a glass box for living, over which hovers a timber box for sleeping. “In an ideal world the glass wouldn’t even be there,” says MacKay. “That was the pure idea – an outdoor camp – and actually we got very close to that.”

It was a slow burn – the design was completed in 2014, but with a lengthy consent process, due to the many mature pōhutukawa on the property, and the fact the building has no standard details, construction didn’t start until 2017. The petite house has been delicately inserted between the pōhutukawa and beneath its branches, with the arms of one very handsome specimen appearing to tumble over the roof.

Stairs wind up from the parking platform at the bottom of the section, the trees creating archways and framing the house as it comes into view. There are places to pause on the ascent and take in the site’s natural beauty. Native planting has grown to soften the retaining walls and steepness of the section.

The deck spans the width of the narrow site and provides sweeping views of Mawhitipana Bay. The fully glazed pavilion houses the kitchen, dining and living areas. Sliding glass doors that span nearly four metres invite a sense of continuity across the site – the connection to nature is immediate. The doors recede into concrete cavities built into the hill, grounding this ethereal room into the site. At this point, the addition of local stone at the exterior lends a sense of solidity to the glass box and anchoring to site.

The timber ceiling of the living area projects about half a metre beyond the pavilion to create an eave, and extends the floor space of the timber box above. On the deck, built-in seating and outdoor furniture in natural tones are in step with the landscape. Taking on an organic form, the large outdoor fireplace on the western deck also responds to the surrounds. 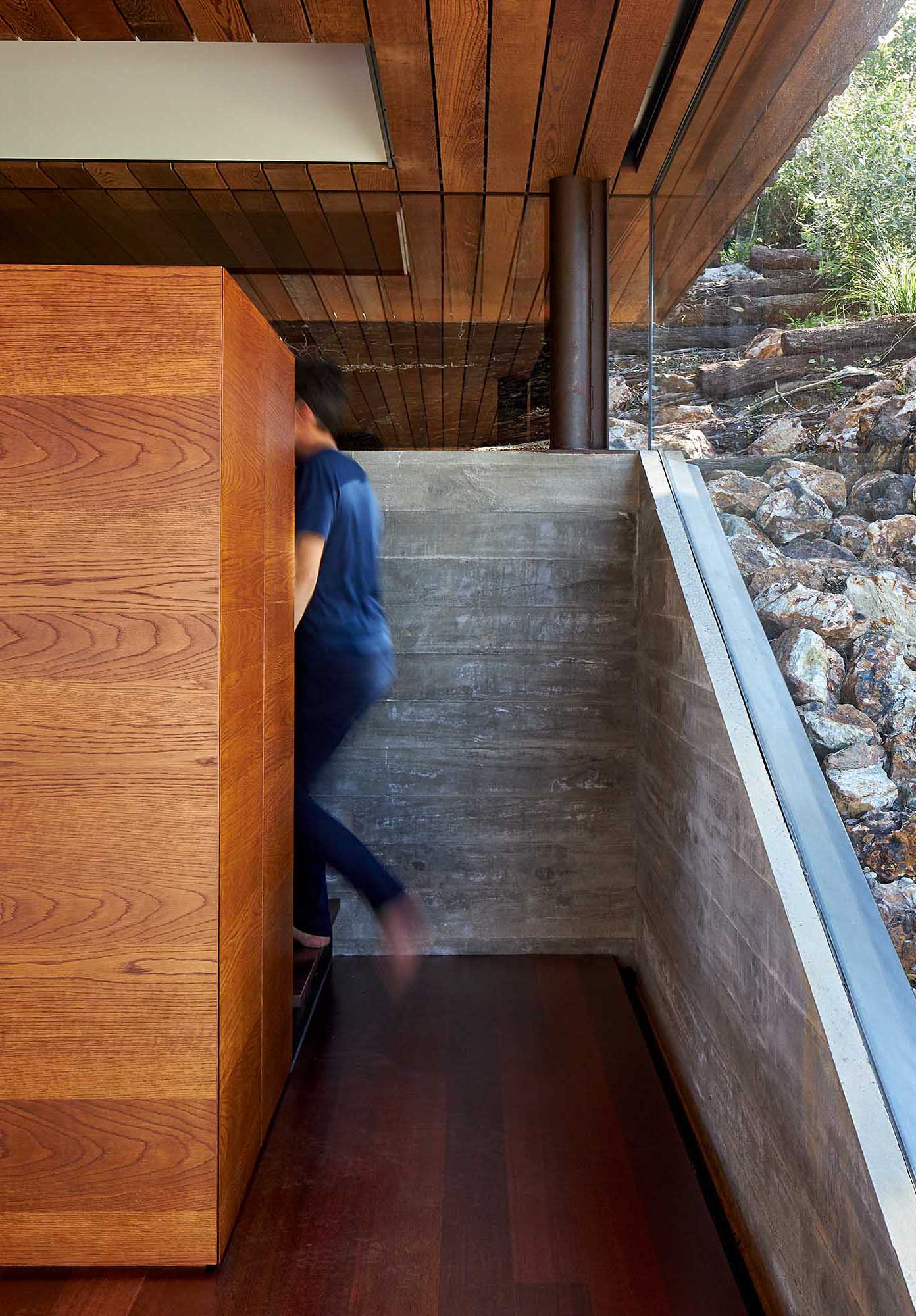 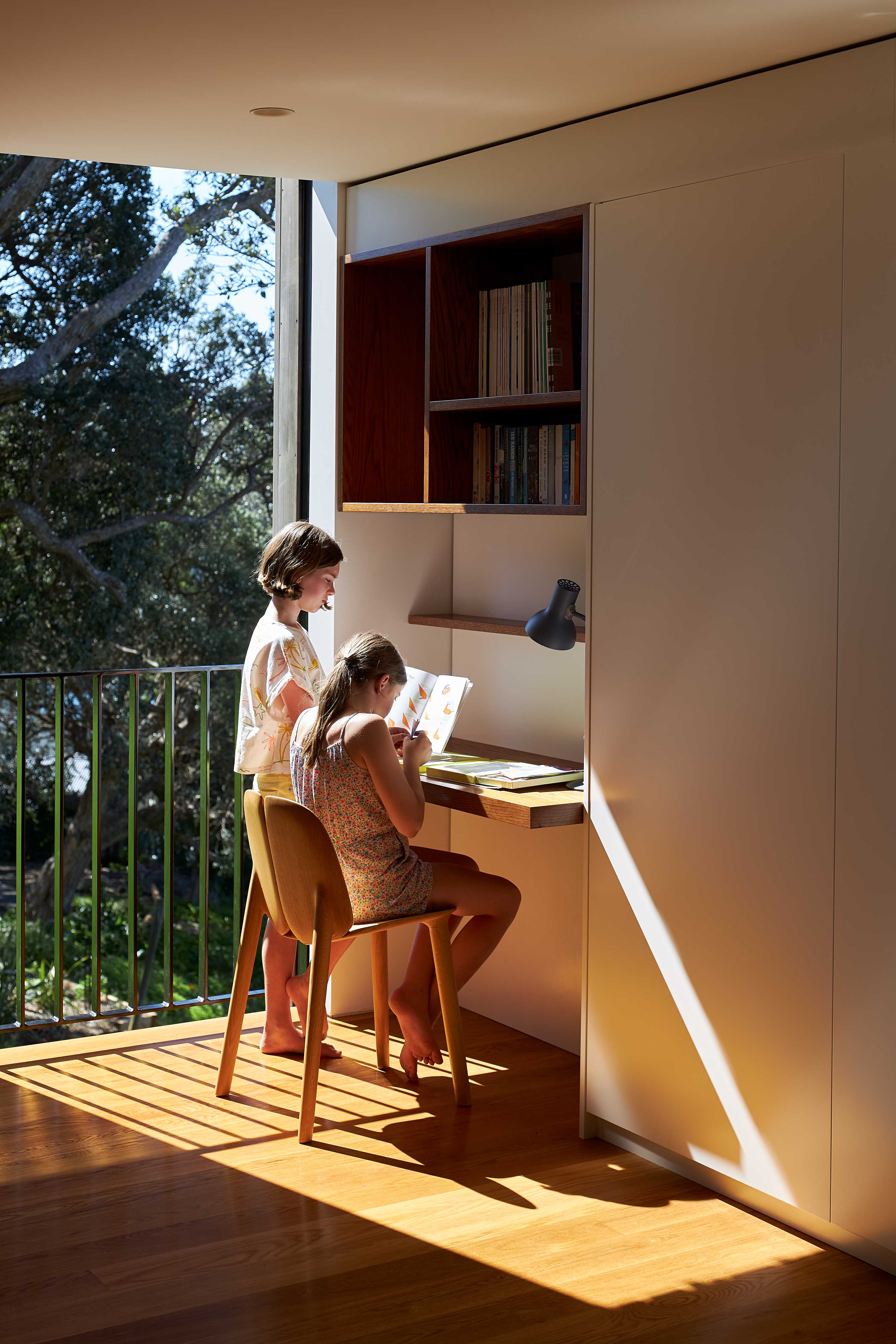 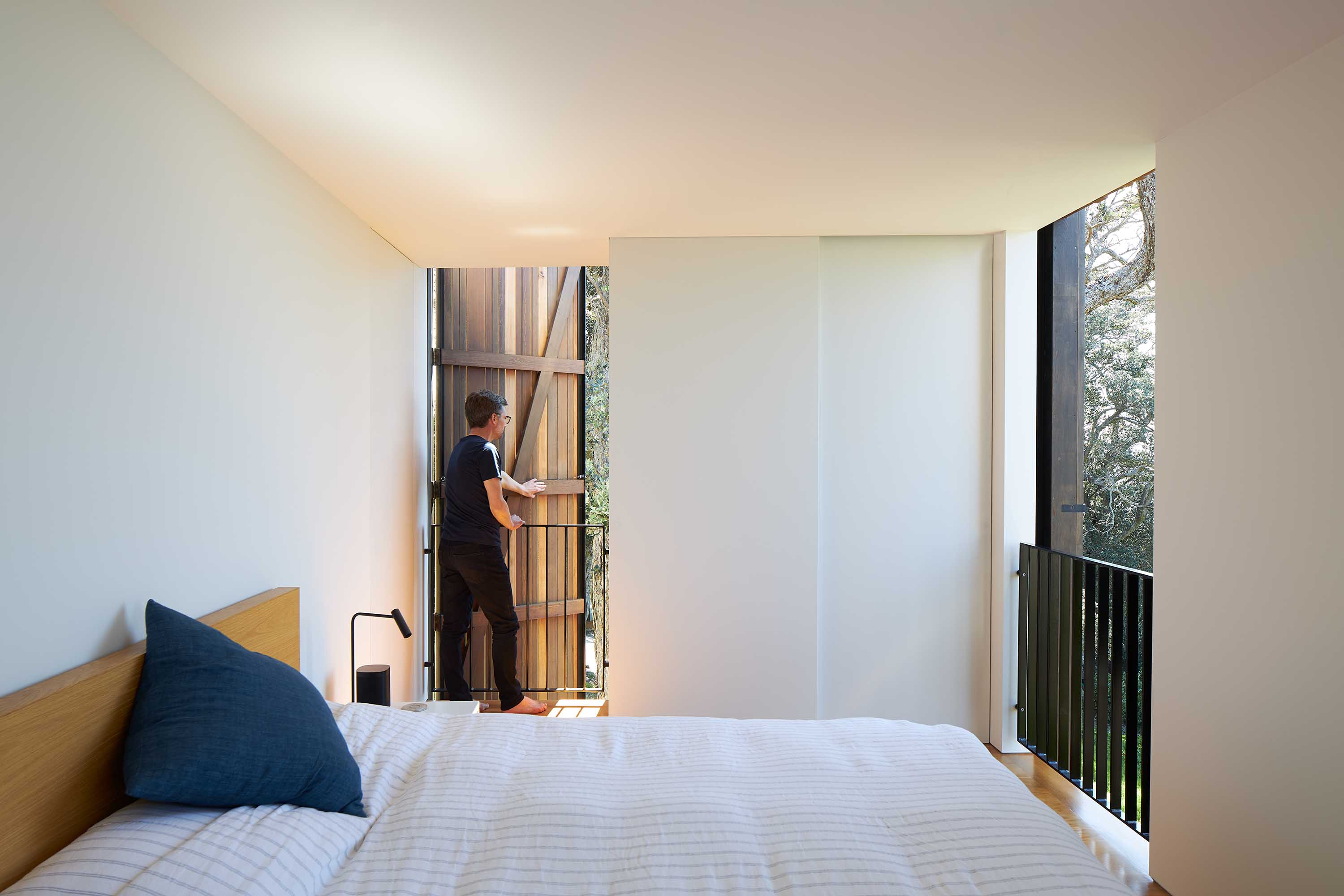 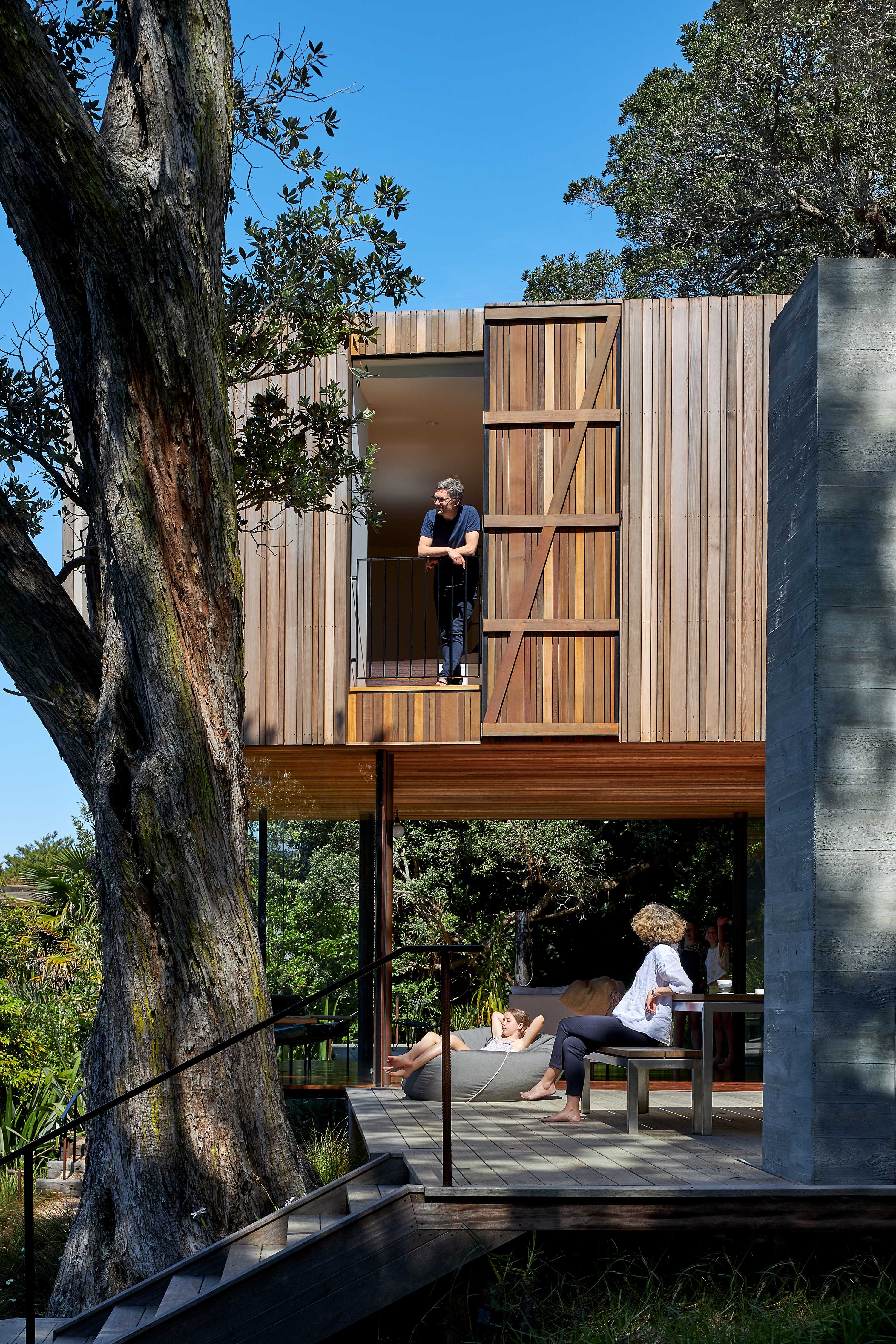 The kitchen is comprised of a floating unit at the back of the room, which adds to the sense of space. The layout resists the more traditional approach of placing work spaces in more direct connection with the living area and views beyond, leaving more floor space for dining and living.

The second floor also defies expectations. Enclosing it with shutters may seem counterintuitive on a site blessed with breathtaking views, but the result creates a private retreat in contrast to the transparency below. The interior palette is crisp, a deliberate contrast to the natural materials used below. The timber box places the main bedroom with en suite at the front, a bunk room at the back, and a multi-use room in the middle. It also contains a bathroom and laundry. All spaces have floor-to-ceiling shutters and sliding glazing, which are opened and closed according to the weather, and how much privacy or view is desired.

The finished product is true to the plan. “The concept is what was built – no compromise – which is unusual,” says Curtis. The architects credit the construction team, including structural engineer Alistair Cattanach and builder Dale Sheffield, for their hard work and determination not to be beaten by the challenging site. With hellish excavating and the hauling of materials up the precariously slippery slope, no one involved in the build ever suggested a quick fix that would compromise the integrity of the vision.

With the landscaping settling into place and the trees overhanging the deck, the messy days of muddy construction are long forgotten. By day, occupation of the site follows the light, shade, breeze and views. The background chorus is of bird life and the delighted shrieks of children playing on Palm Beach below. By night, the sound of the waves filter through the timber screens – a proper island retreat. 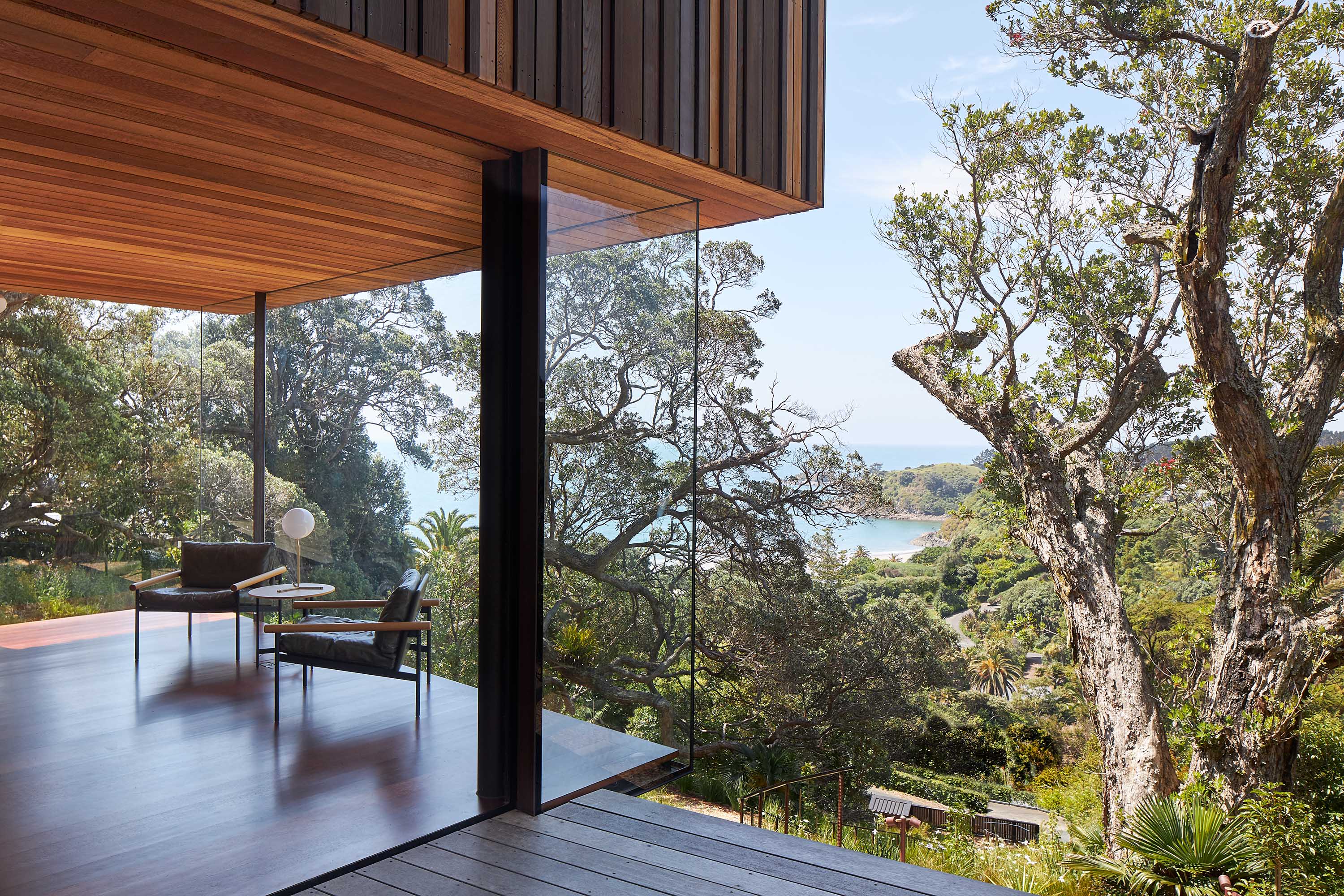 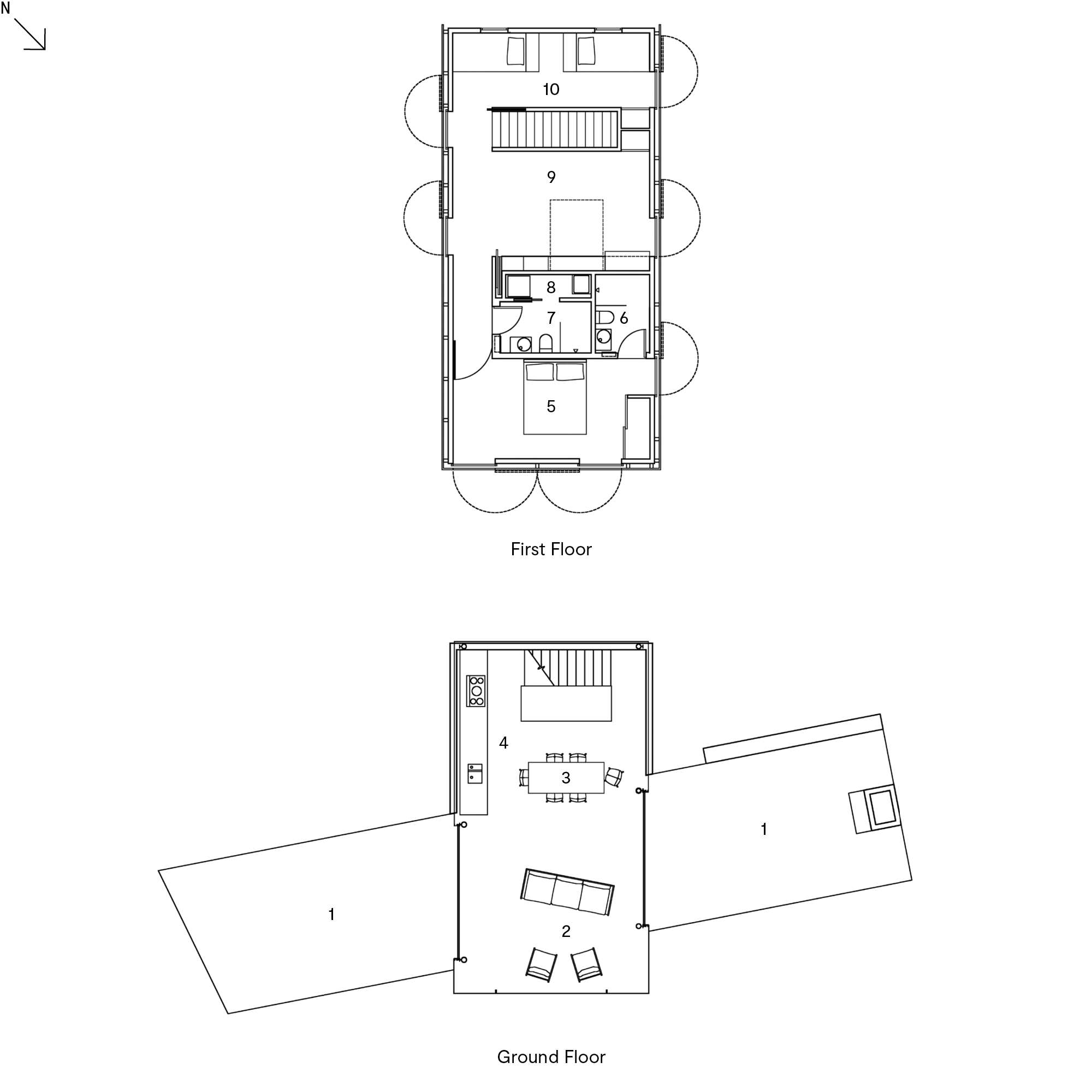 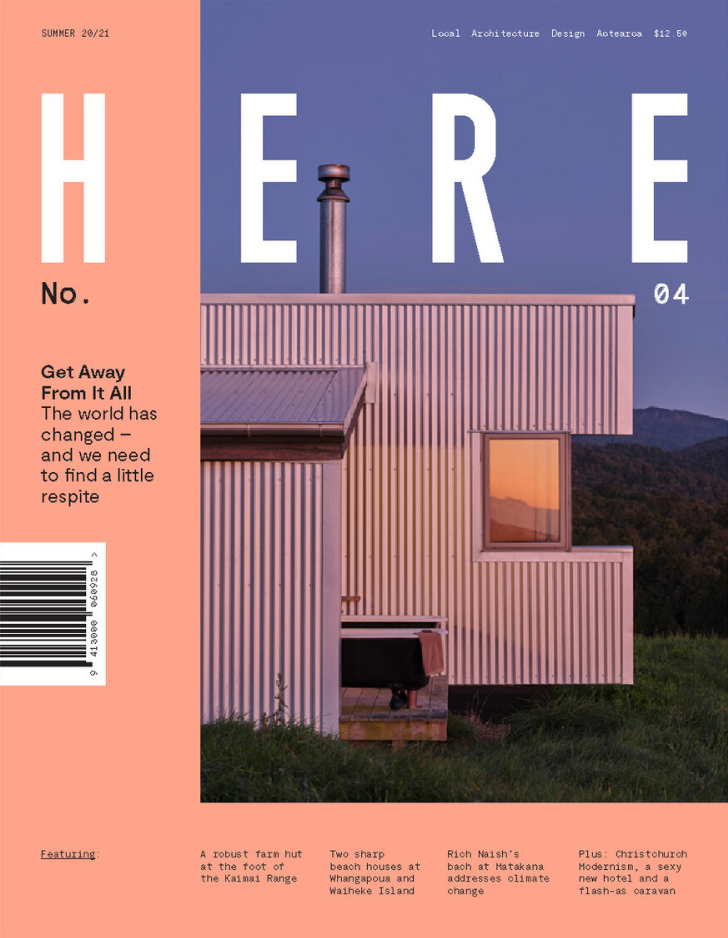